What to Eat Near National Taiwan University’s Gongguan Station

Located on the southwestern side of National Taiwan University of Science and Technology (國立臺灣科技大學 / guo li tai wan ke ji da xue) is a bustling train station called Gongguan Station (公館站 / gong guan zhan). Aside from bringing students to the entrance of the university, this area also plays host to a variety of delicious eats. If you’re looking to check out something a little outside the more touristy areas of Ximending, Yongkang, and Xinyi; you’ve come to the right place! 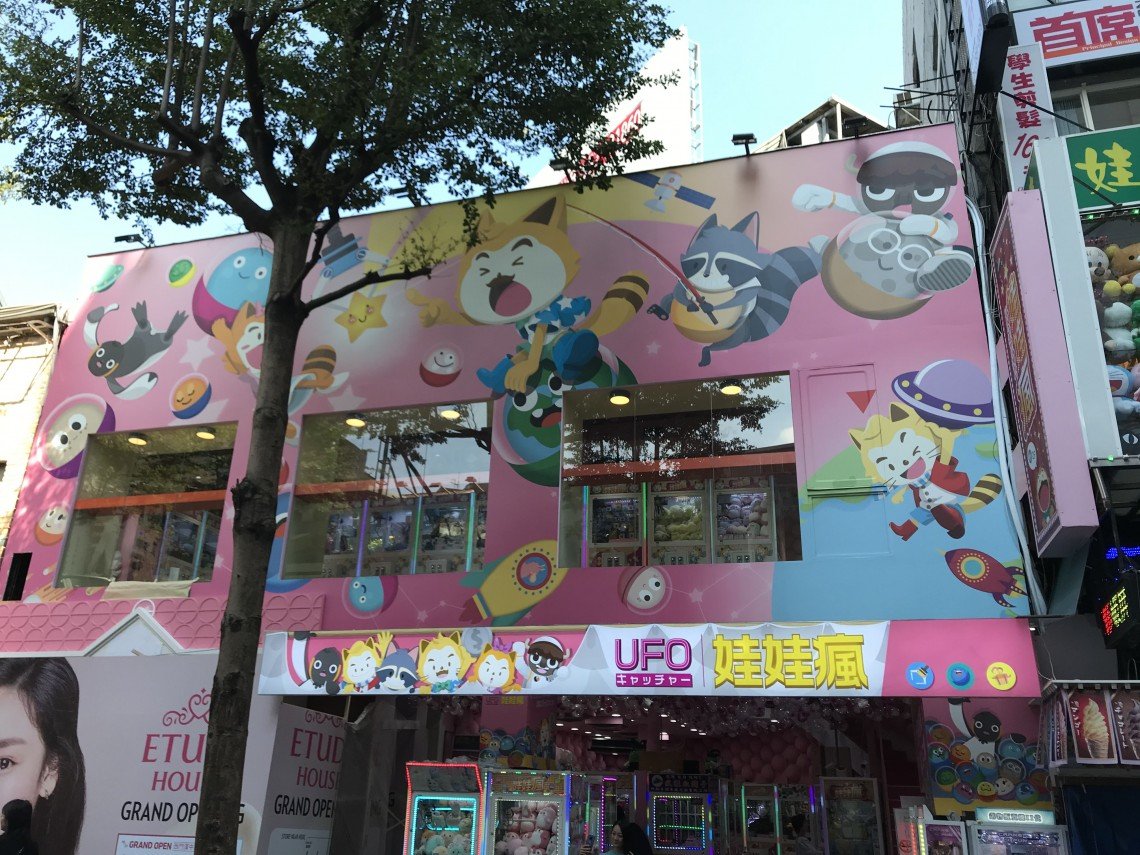 From amazing Taiwanese pork bun (割包 / ge bao) to one of the top boba places I’ve been to in Taiwan, you’re bound to find something that will satisfy your tastebuds. 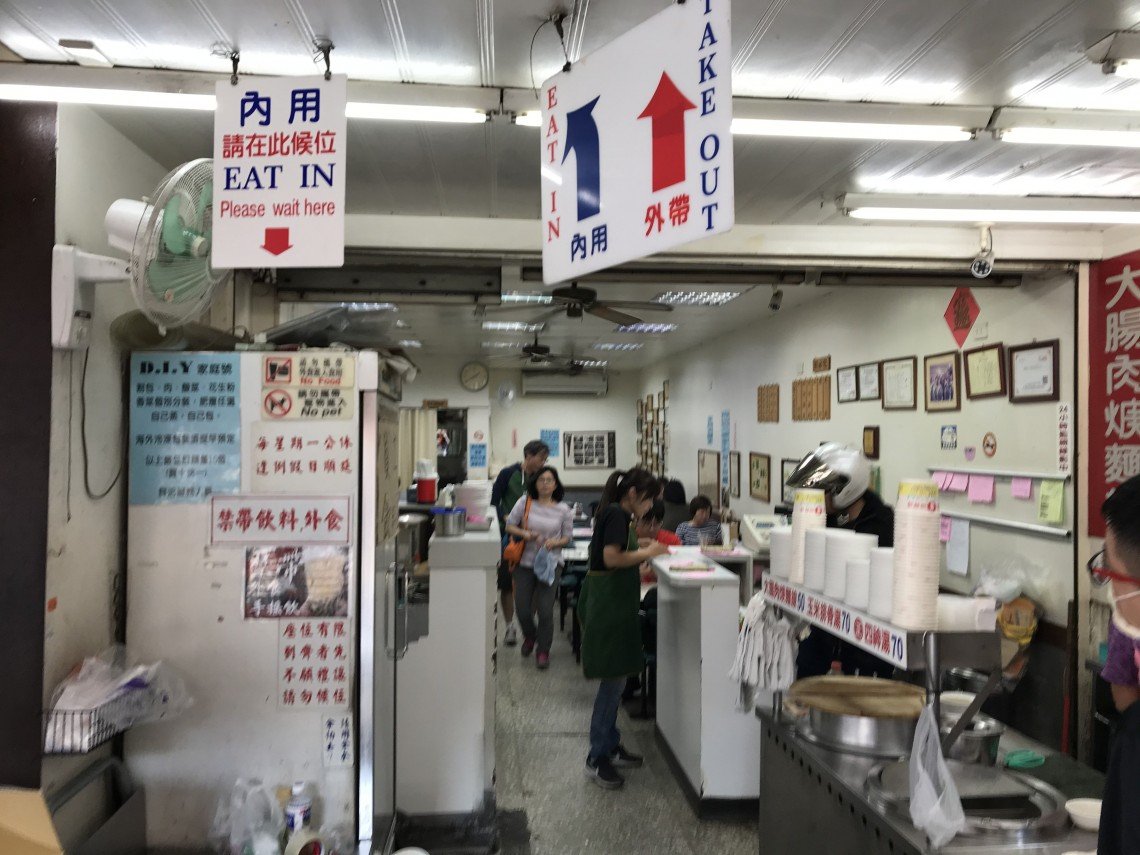 Like many eateries in Taiwan, Lan Jia Traditional Taiwanese Snack (藍家割包 / lan jia ge bao) doesn’t have a whole lot of pizzazz to it. Where it lacks flair though, it puts all of its love and effort into its food. Lan Jia has a variety of dishes available, including corn soup with pork bone and meat dumpling (肉粽 / rou zong), but they are best known for their Taiwanese pork buns (also known as guabao’s). 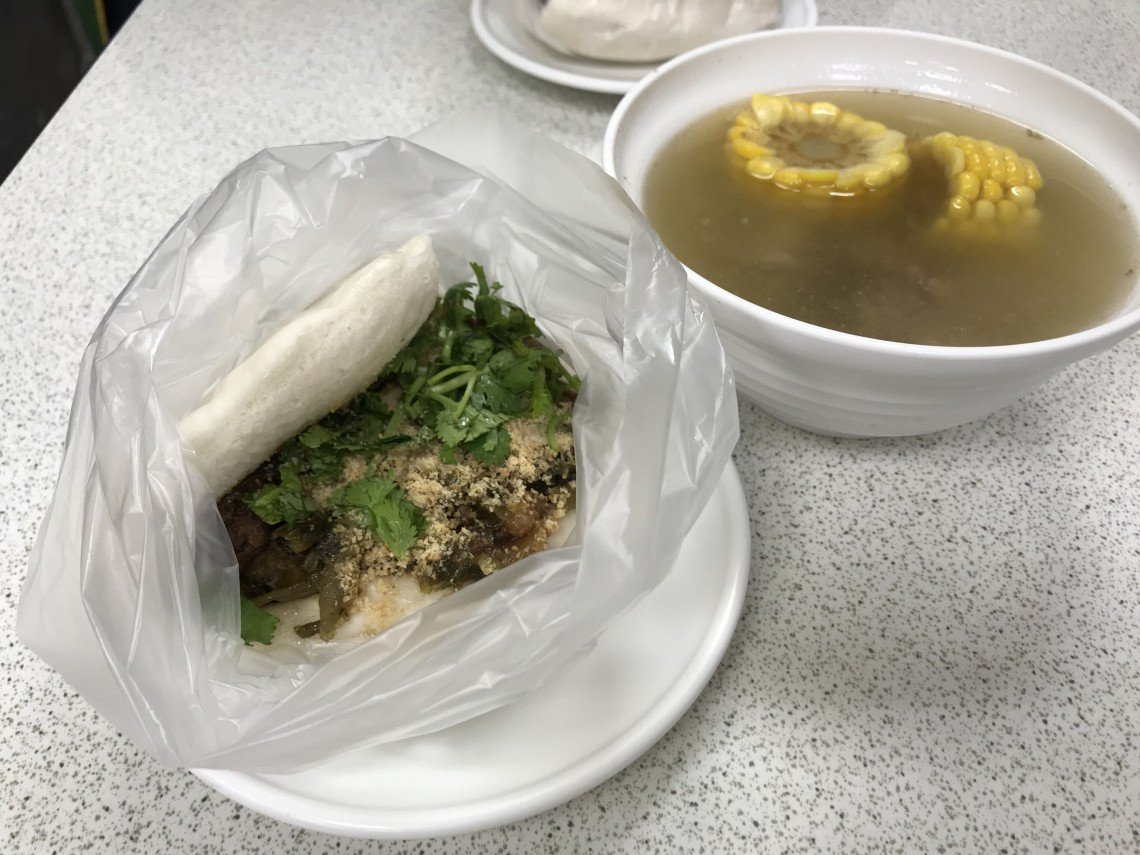 The guabao come lean, partial lean, half lean/fatty, partial fatty, and fatty. I haven’t tried the fattier buns, but I can imagine they would be even more flavorful than the lean buns.

The sweetness of the candied peanuts (糖花生 / tang hua sheng) and the sourness of the pickled vegetables (泡菜 / pao cai), along with the cilantro (香菜 / xiang cai), blend together nicely to create a flavor explosion that will cause you wanting more. 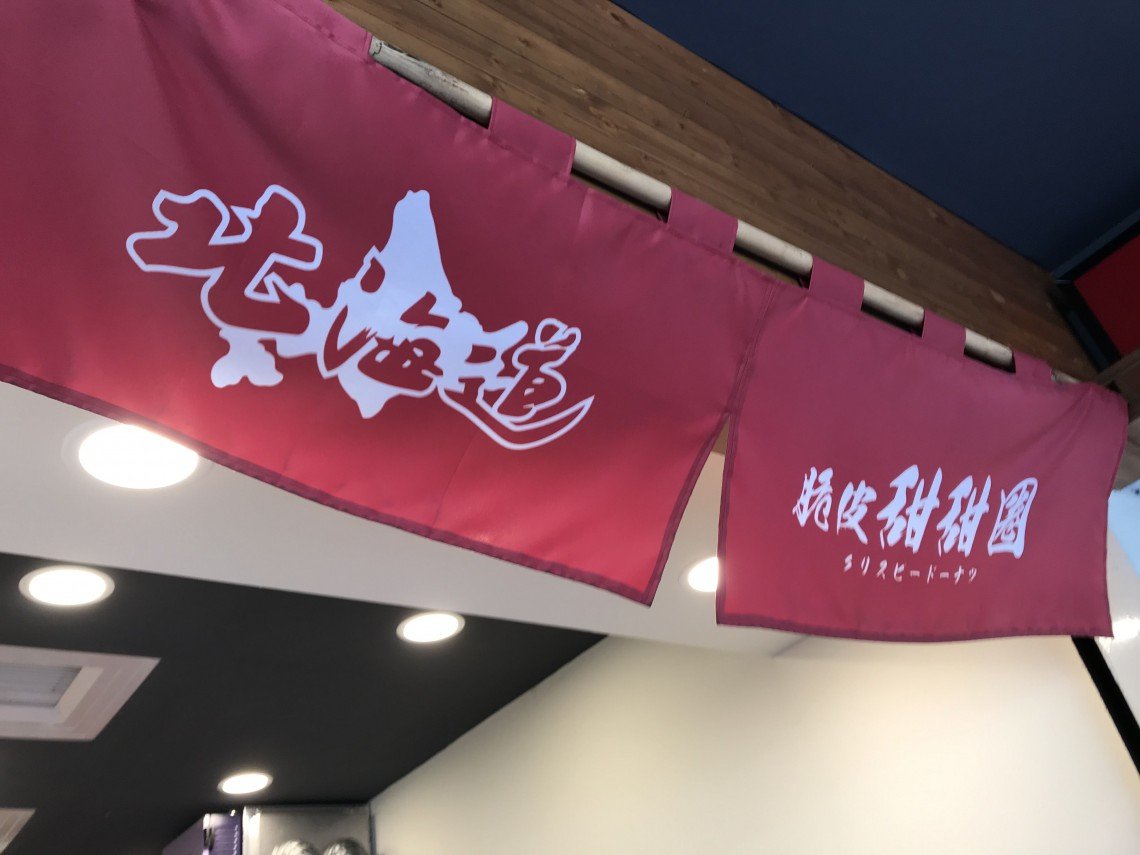 One shop that is fairly new to the area is a doughnut shop called Crispy Fresh Donuts (北海道脆皮甜甜圈 / bei hai dao cui pi tian tian quan). My guess is that this was one of those places from Japan that found a nice place in the Taiwanese market. 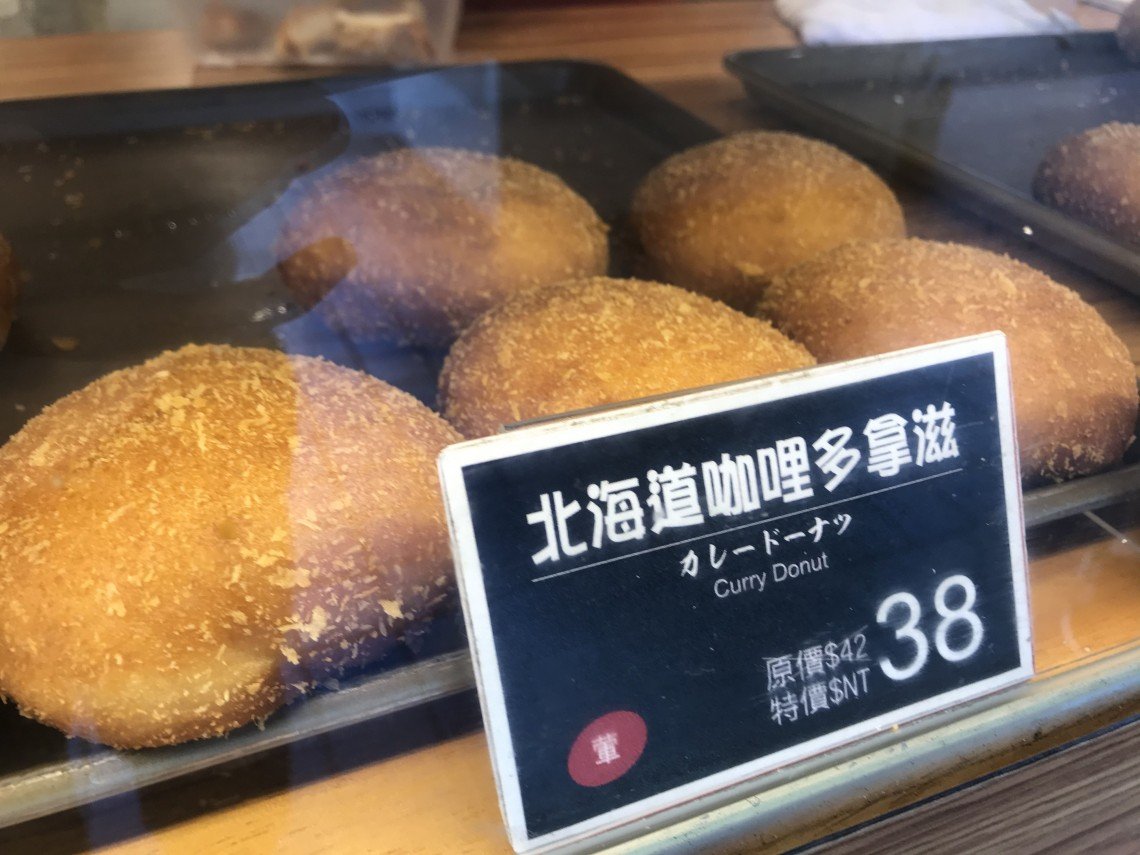 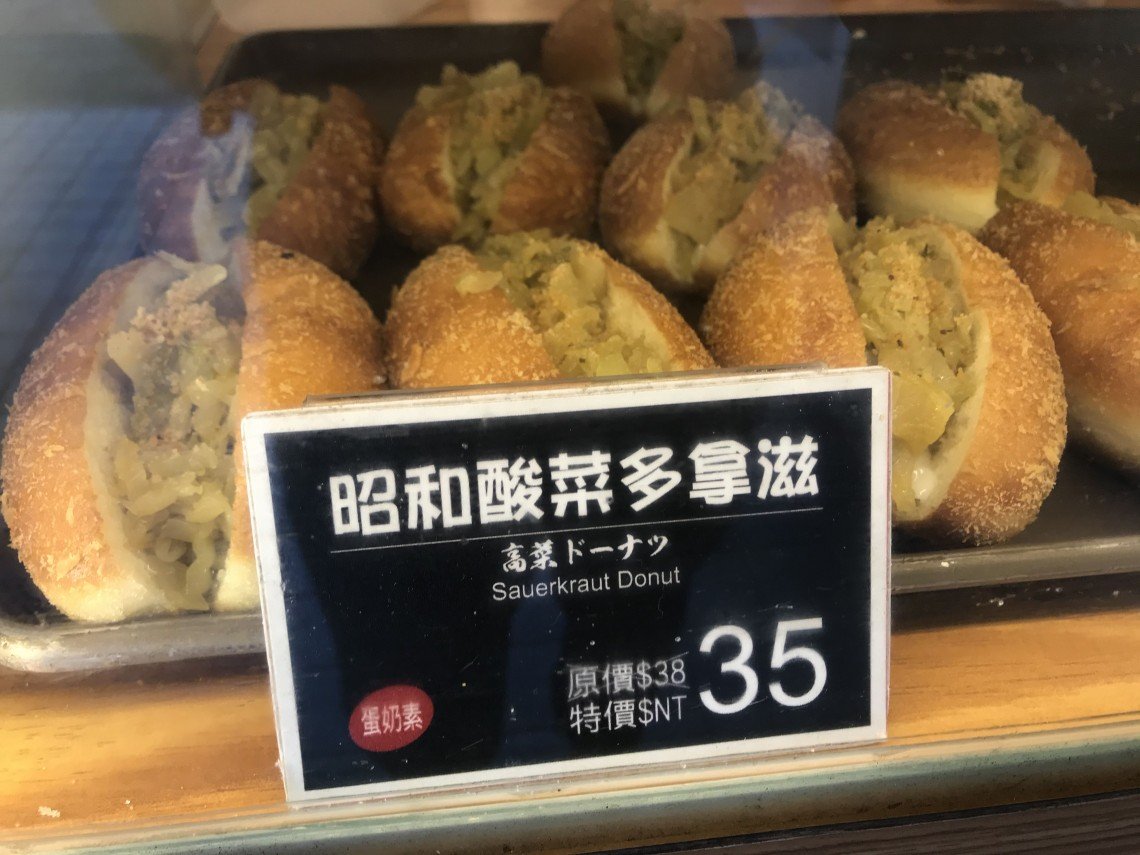 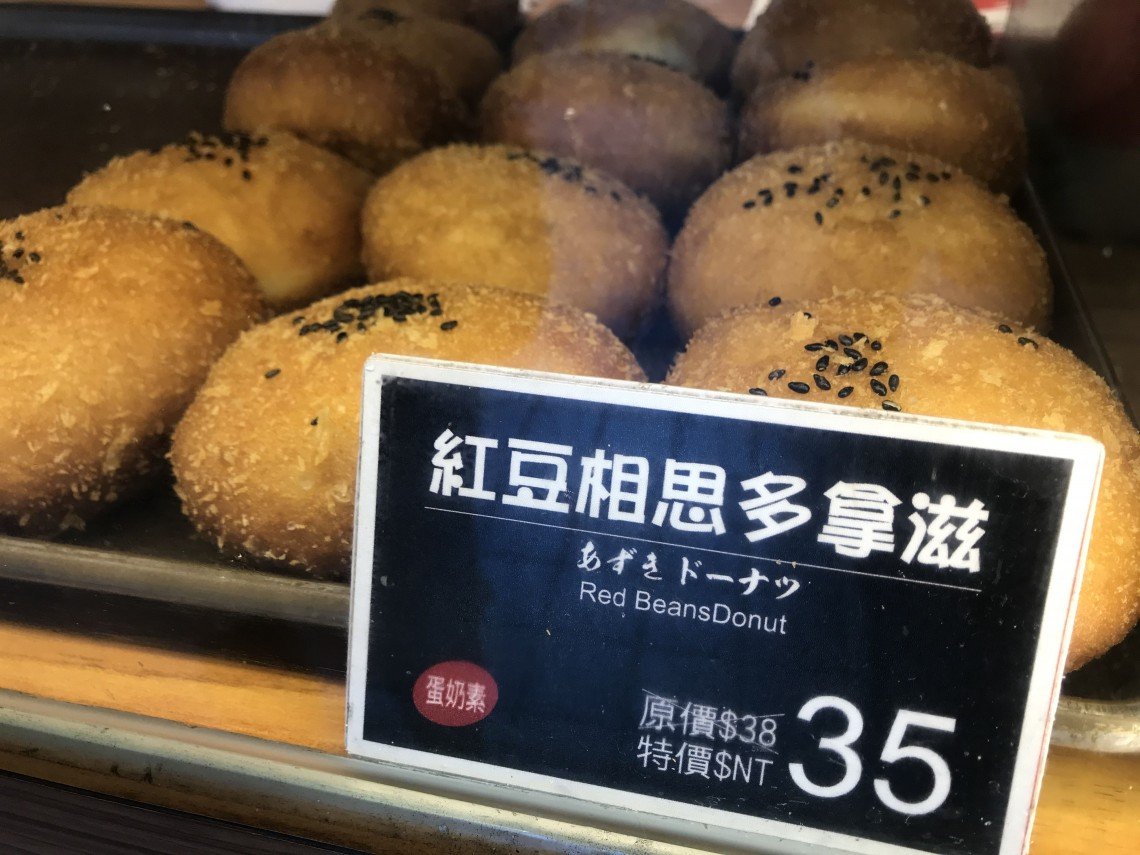 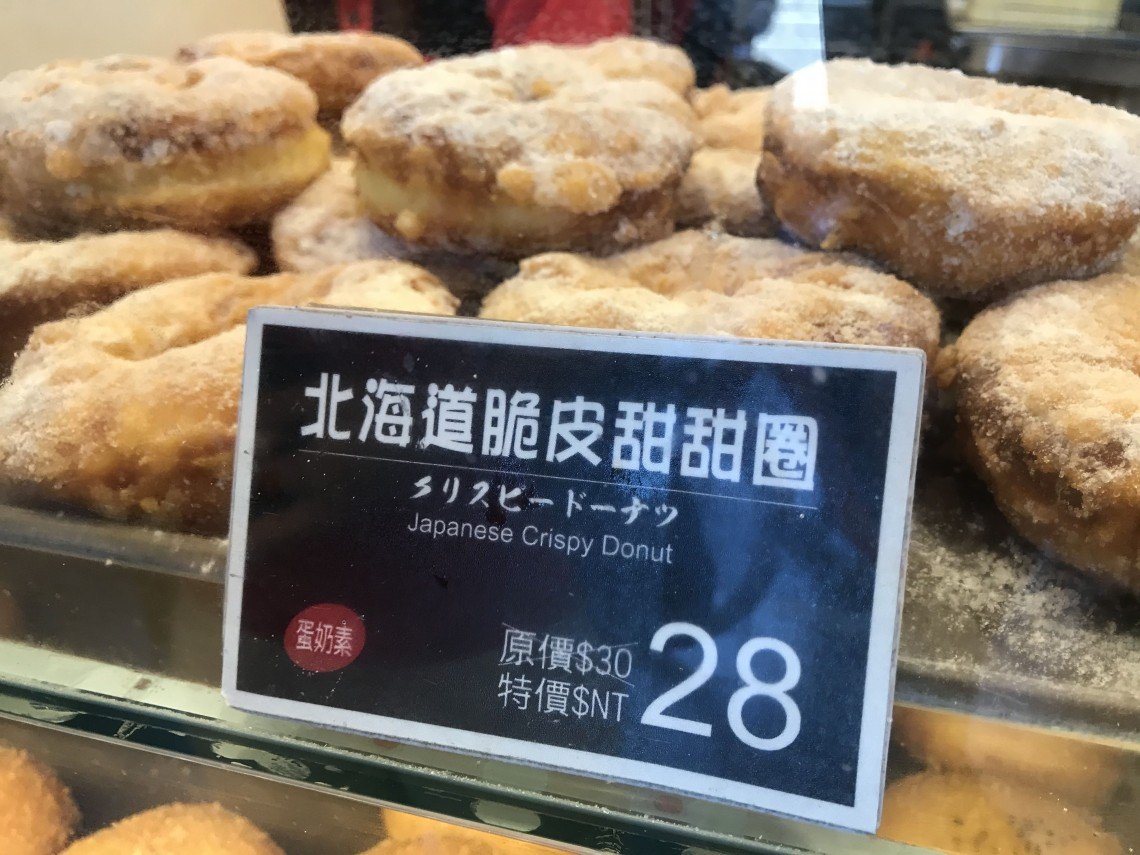 And the Japanese crispy donut (which is what they’re named for).

Unlike a normal donut, this donut is not perfectly round nor is it soft. It has the chewiness of a donut and a well-balanced texture in between crispy and soft. There is a slight sweetness to the dough, but most of the sweetness comes from the sugar that it’s dipped in on the outside. 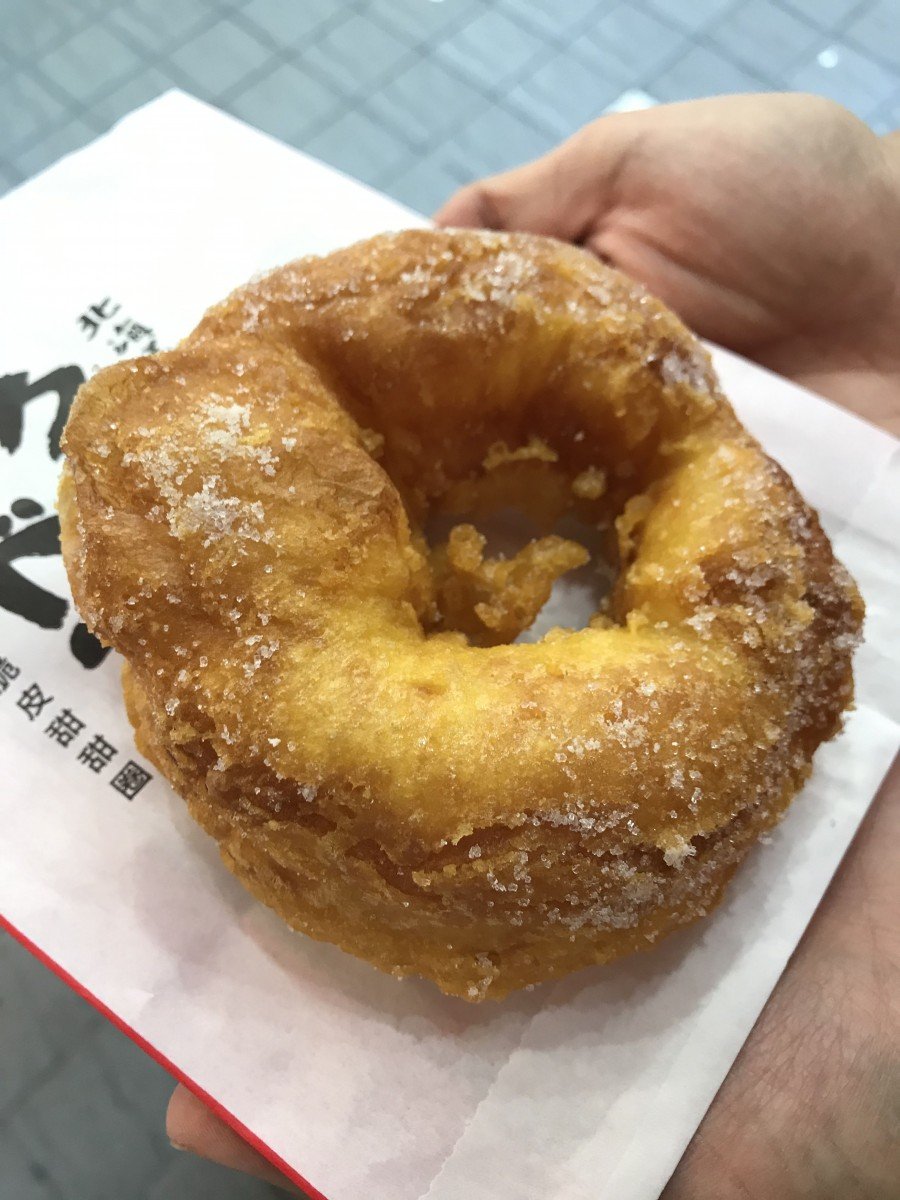 I’ve never had anything quite like it. As an avid donut lover, this is definitely one of the top donuts that I’ve had around the world. Granted Crispy Fresh Donuts is a chain (there are a few locations in Taipei), it’s still a delightful little find and one that I would wholly recommend you try! 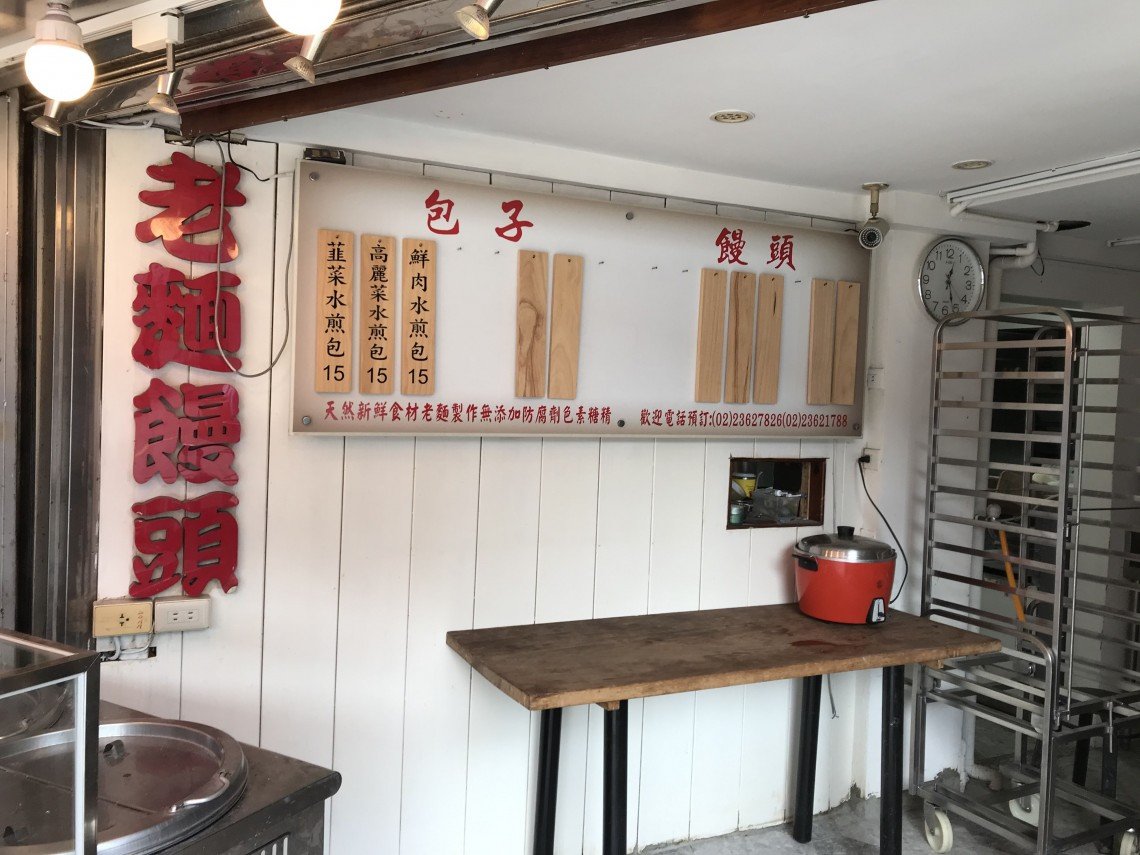 After seeing Steven and Andrew’s Worth It video (where they took on Taipei), we decided to give Liu Jia Pan-Fried Bun (劉家水煎包 / liu jia shui jian bao) a try. 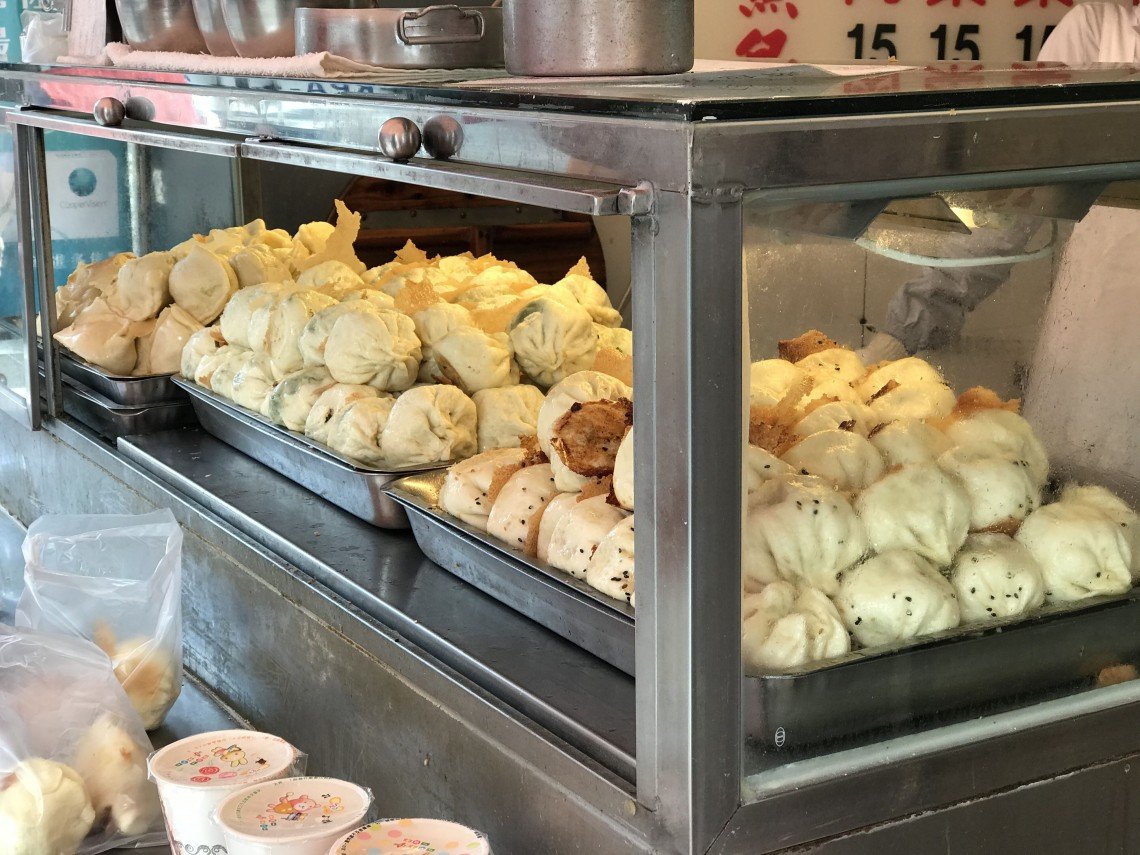 Their dough is fermented for two days before being used to make a variety of dumplings. A ton of care is taken to make sure that the dough has a QQ texture and golden bottom. 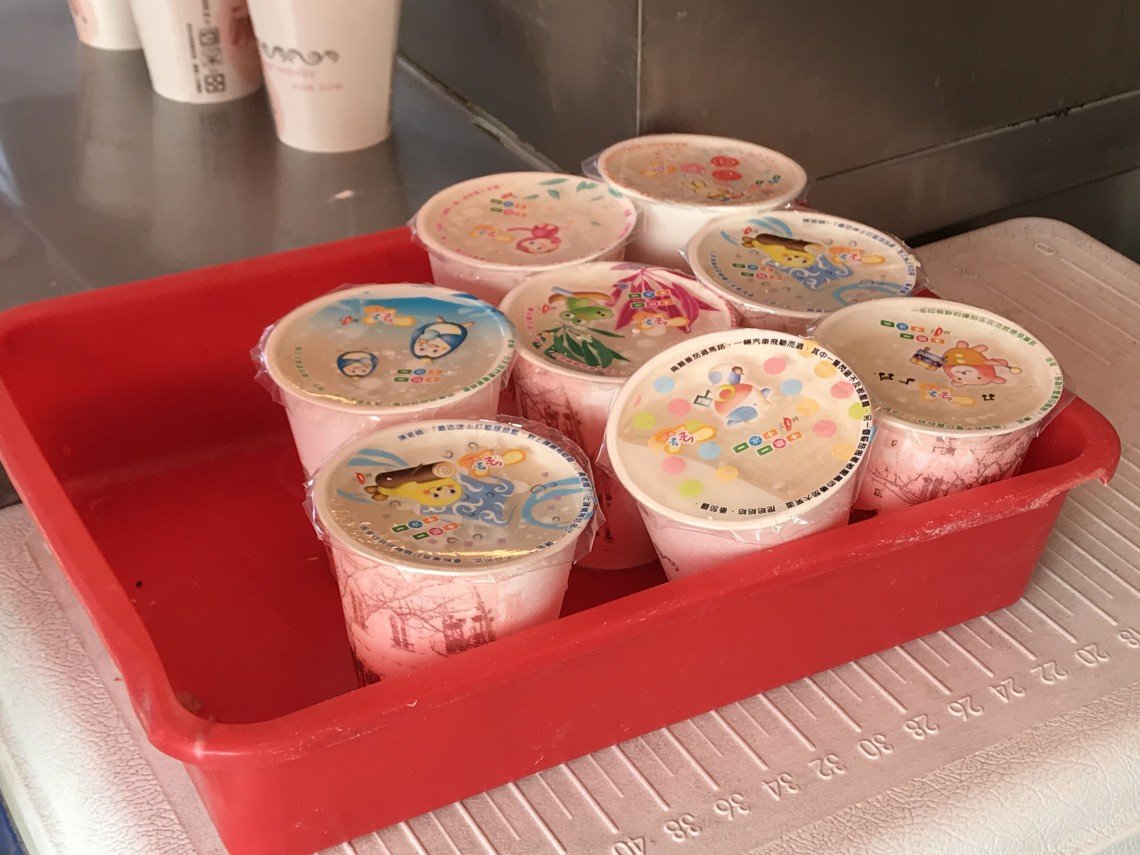 They’re most known for their chive dumplings and fresh soy milk. 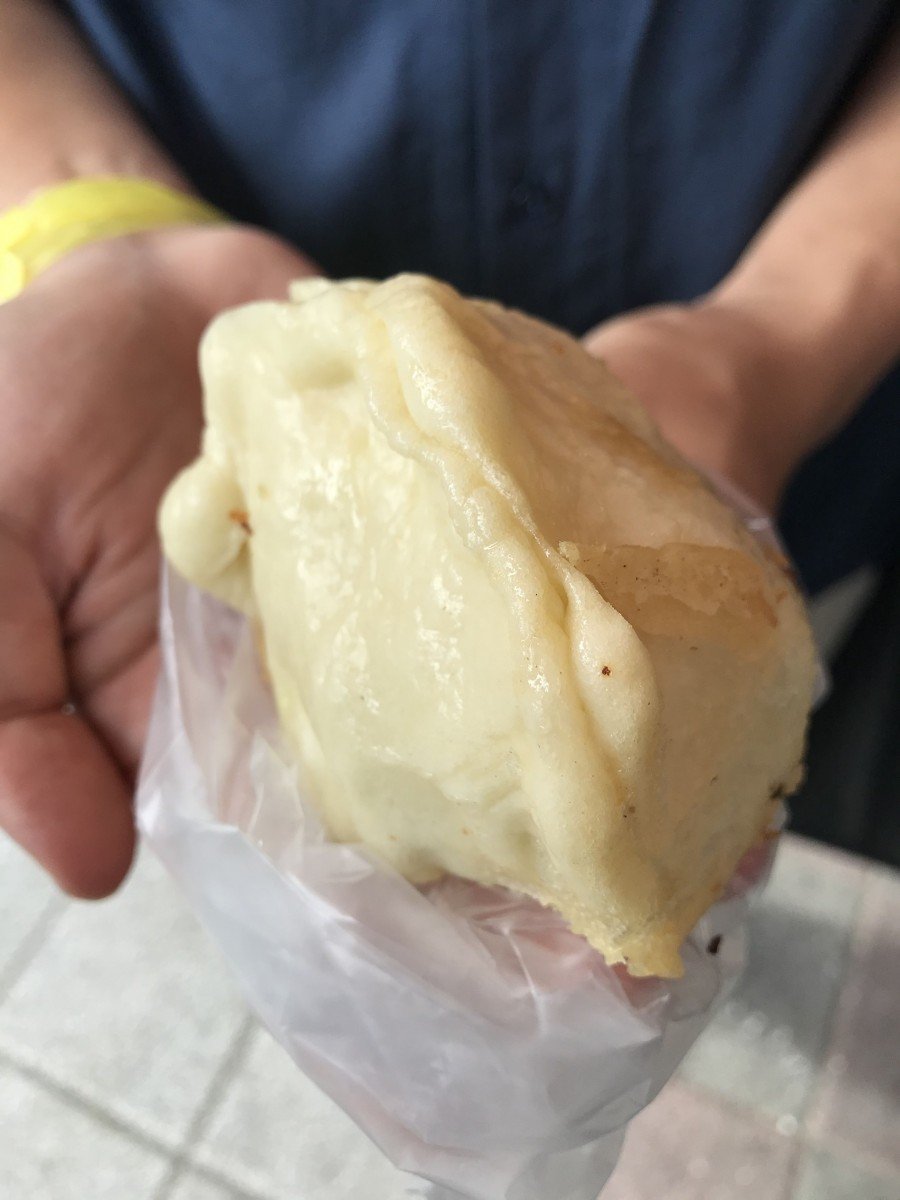 We ended up trying the pork pan-fried bun and soy milk. Here’s a close up photo of the pork bun. 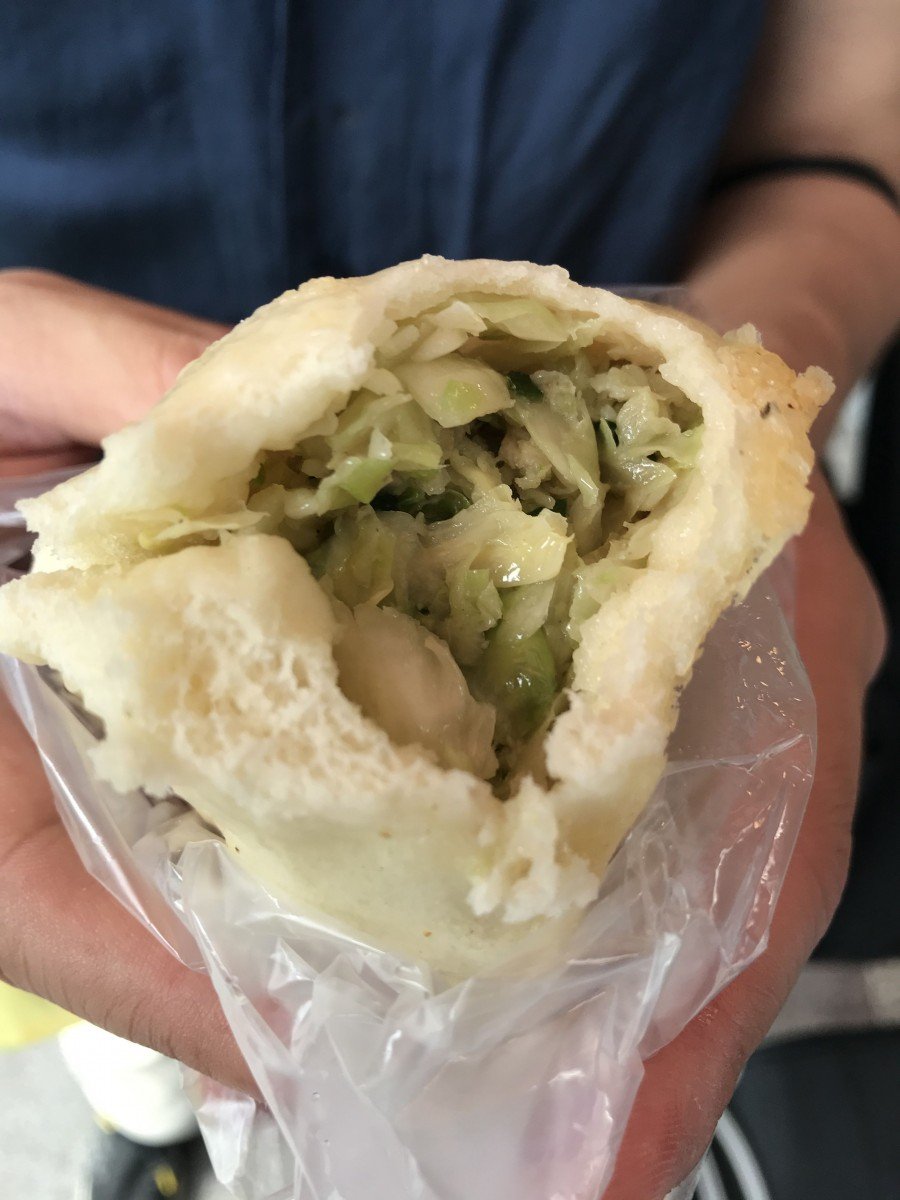 Inside is a ton of vegetables and pork. The dough was super good. You could probably get three to five of these dumplings for breakfast and be full after lunch. 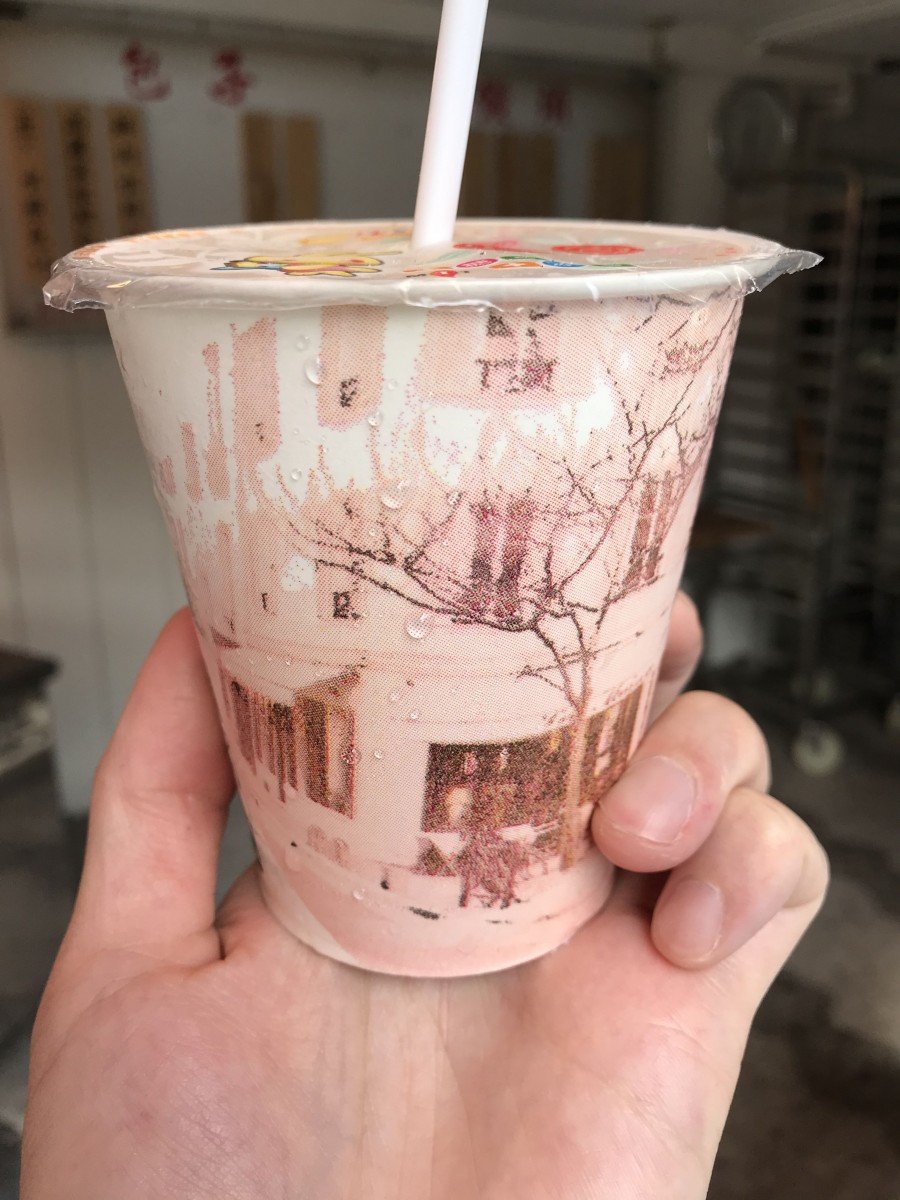 The soy milk was also super nice and refreshing. Compare to soy milk that you might get in a Tetra Pak, the soy milk here is deep and thirst quenching.

Breakfast Sandwiches with a Western Touch 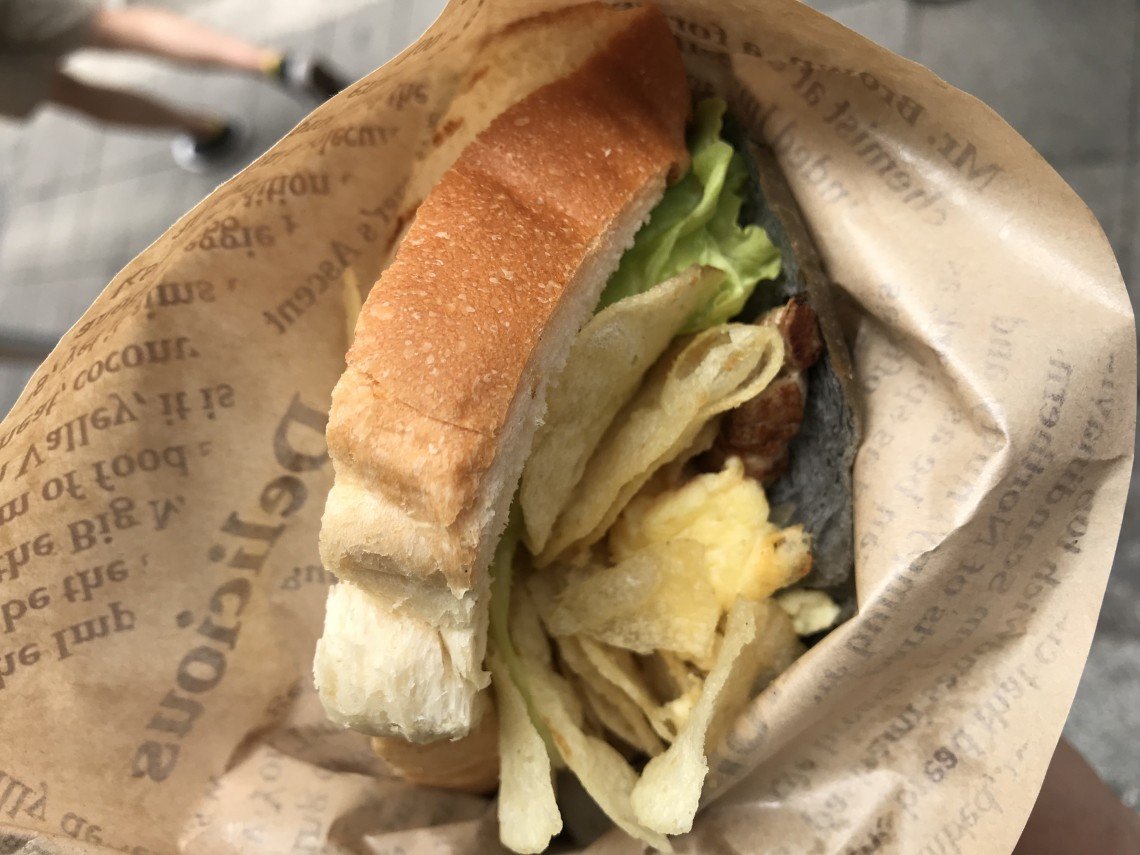 Growing up with alternating PB & J sandwiches and ham and cheese sandwiches for lunch, it’s rare for me to want a sandwich. I’ll take a banh mi or katsu sandwich any day, but more western sandwiches are a bit of a stretch to me. Oddly enough, in Taiwan, I find that I seek them out. Along side steamed buns (饅頭 / man tou), egg pancakes (蛋餅 / dan bing), radish cakes (蘿蔔糕 / luo bo gao), and rice rolls (飯糰 / fan tuan); I love a good sandwich (三明治 / san ming zhi).

One place that we stumbled upon is a sandwich shop called Toast Toast (吐司吐司 / tu si tu si). They have a wide selection of western-inspired sandwiches with a Taiwanese twist. I got my chicken sandwich with milk bread and charcoal bread. The potato chips gave the sandwich a nice crunch. Would totally recommend! 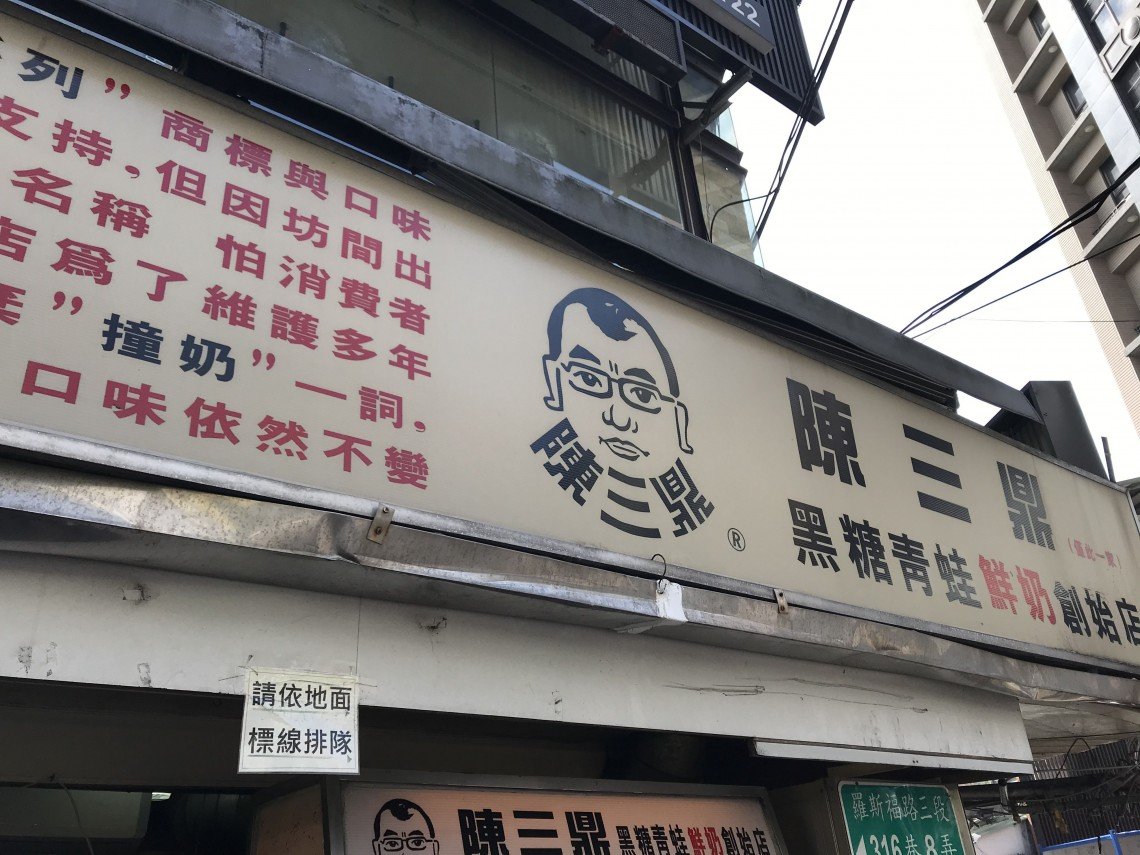 Update: Sadly this location is closed now. After being open for over a decade, it’s sad to see this place go. To try what they were known for, you can grab the 青蛙撞奶 (qing wa zhuang nai) from most night markets. I don’t know of a place that’s close to the taste offered, but if anyone knows, do message me!

I previously wrote about where you can get the best brown sugar boba drink, Chen San Ding (陳三鼎黑糖青蛙鮮奶創始店 / chen san ding hei tang qing wa xian nai chuang shi dian). Even after going multiple times across multiple trips, it still stands out as the best for the drink affectionately known as frogs bumping into milk.

Nowadays, places like Xing Fu Tang in Ximending stand out for their flashiness, but I still like how down to earth this shop feels (perhaps it has something to do with the university being a block away). Anyway, if you like boba, try this drink from Chen San Ding.

The boba is so soft and warm. The sugar is nice. Everything about it is well balanced. You won’t be disappointed.

Bonus: if you’re in the area and looking to burn a few calories off, check out Treasure Hill Artist Village (寶藏巖國際藝術村 / bao zang yan guo ji yi shu cun), located a few blocks south and west of the Gongguan Station area. Here you’ll find a squatter community turned into an artistic community. As a huge street art person, I loved wandering the corridors and checking out the art, including this larger than life fortune cookie! 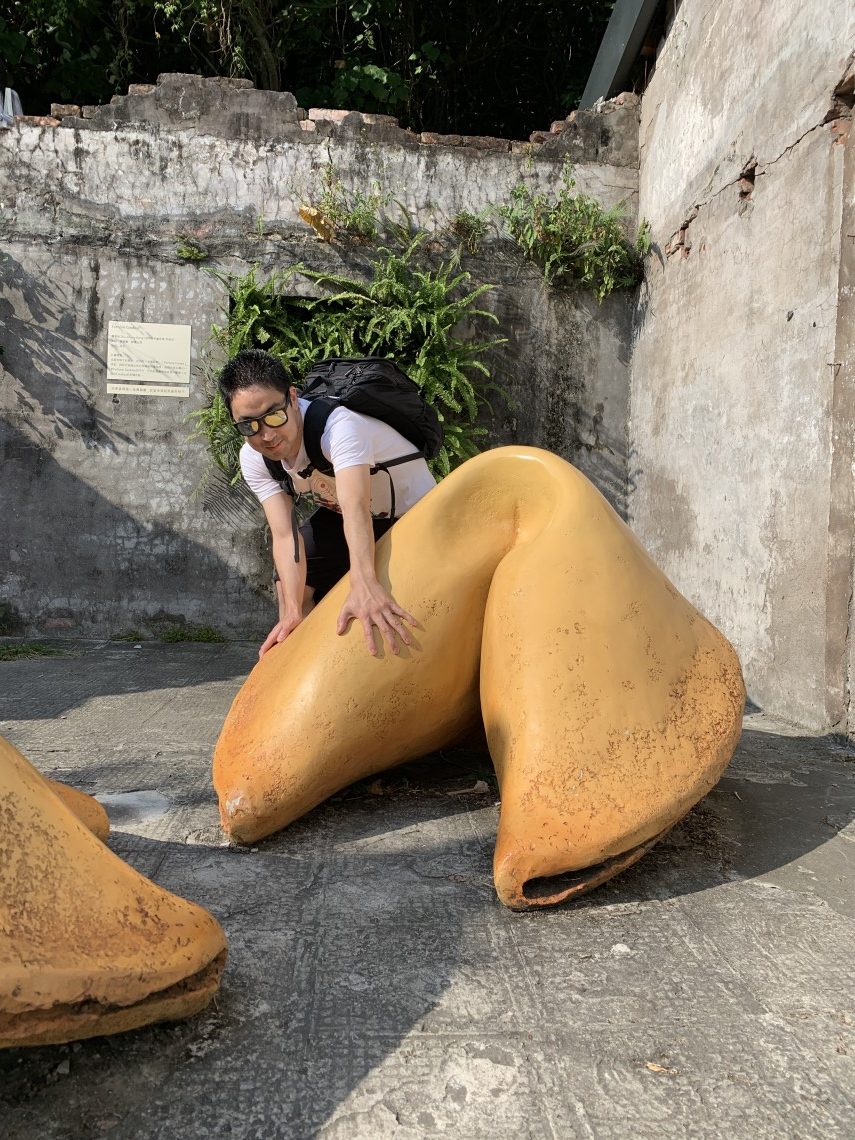