What to Do in Maokong: Exploring Peak Tea Culture in Taipei

When people visit Taipei, they often go to Taipei 101 and the night markets. Located on the outskirts of the city in Wenshan District (文山區 / wen shan qu) is an area known as Maokong (貓空 / mao kong). In addition to being adjacent to the Taipei Zoo (臺北市立動物園 / tai bei shi li dong wu yuan), Maokong is known for its tea-centric economy. In particular, Maokong is famous for its Iron Goddess tea (鐵觀音茶 / tie guan yin cha) and restaurants with all kinds of tea-inspired dishes.

The past few times, I visited Taipei, Maokong has always been just a little out of the way to visit. No longer!

From where we were staying in Ximending, we headed east on the green MRT line to Nanjing Fuxing Station (南京復興站 / nan jing fu xing zhan) where we took the brown line south to Taipei Zoo Station (動物園站 / dong wu yuan zhan).

You know you’ve arrived when you have to exit the train. Taipei Zoo Station is the last station on the southern part of the brown line. 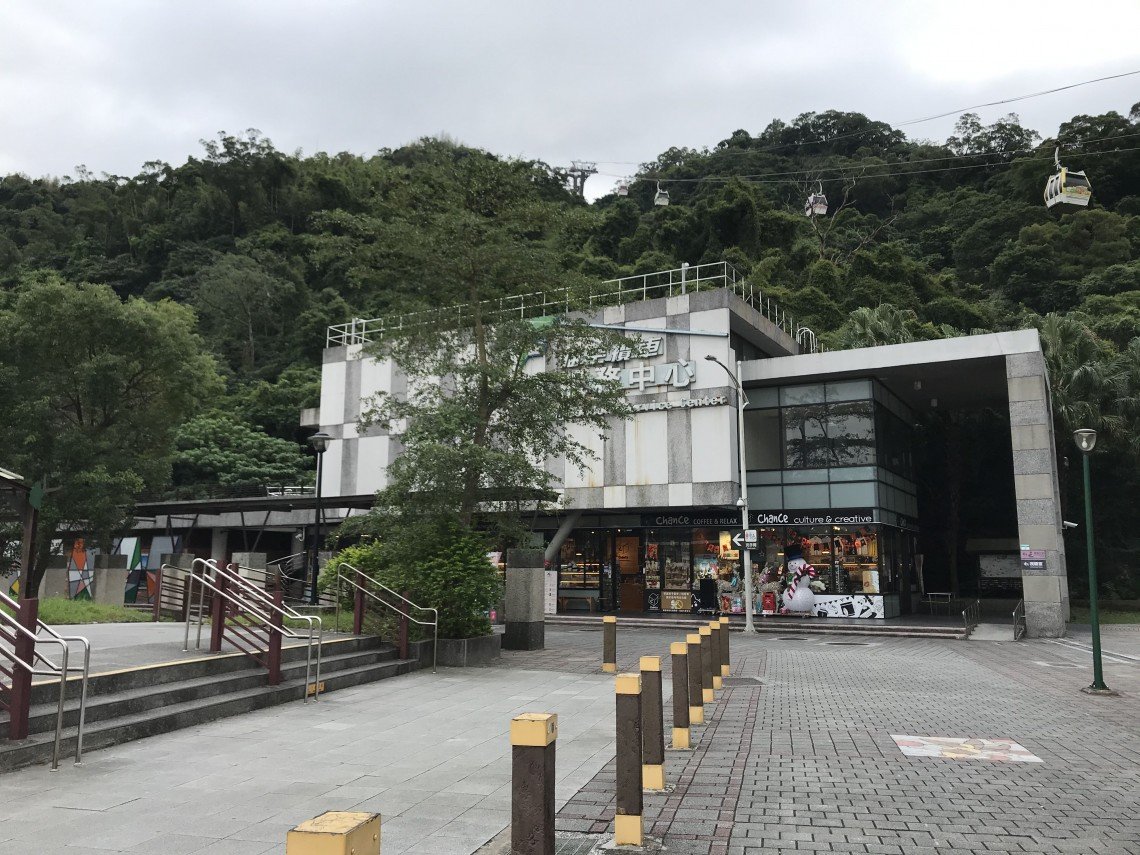 We headed south along the main road to the Maokong Gondolas. Along the way, you’ll pass by the building above. 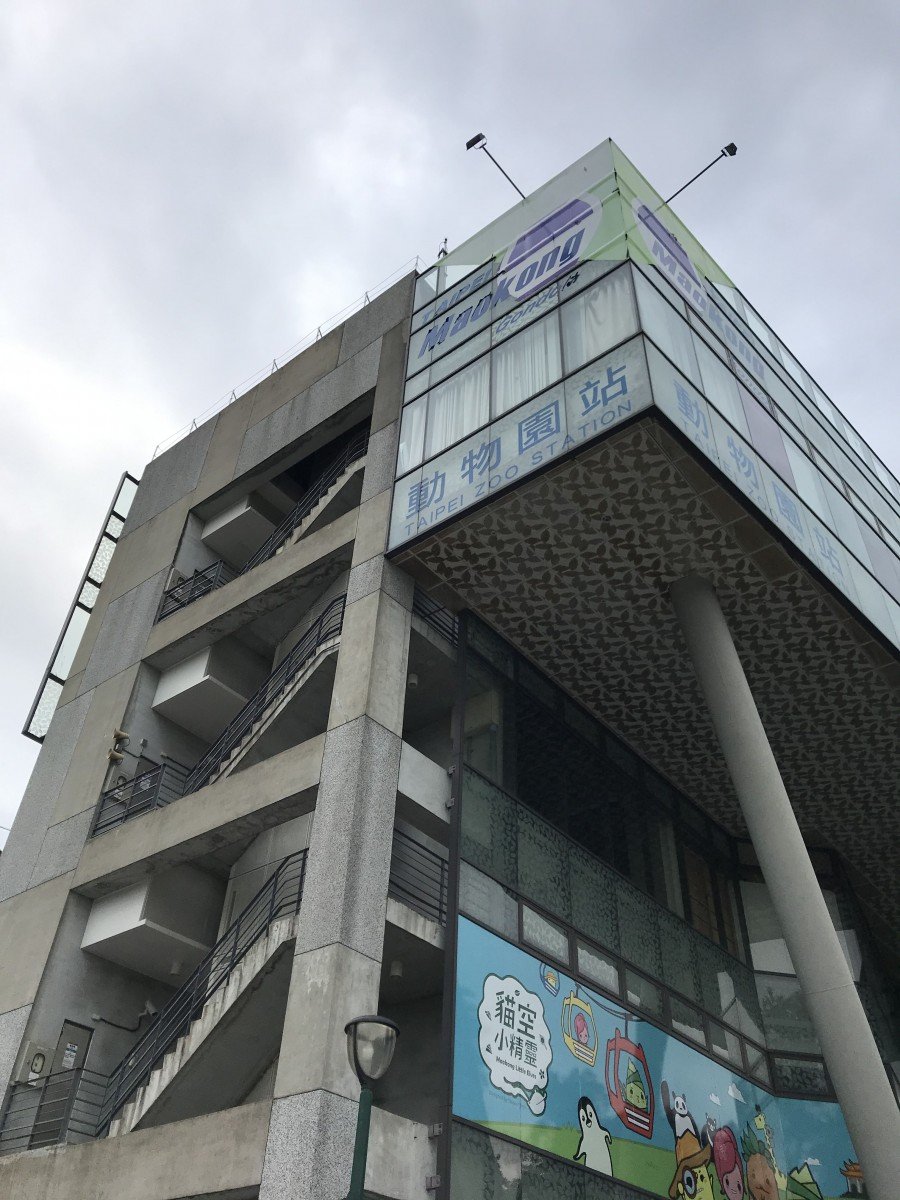 This is the gondola station. After paying for a ticket outside, you make your way in and up to the top of the building. 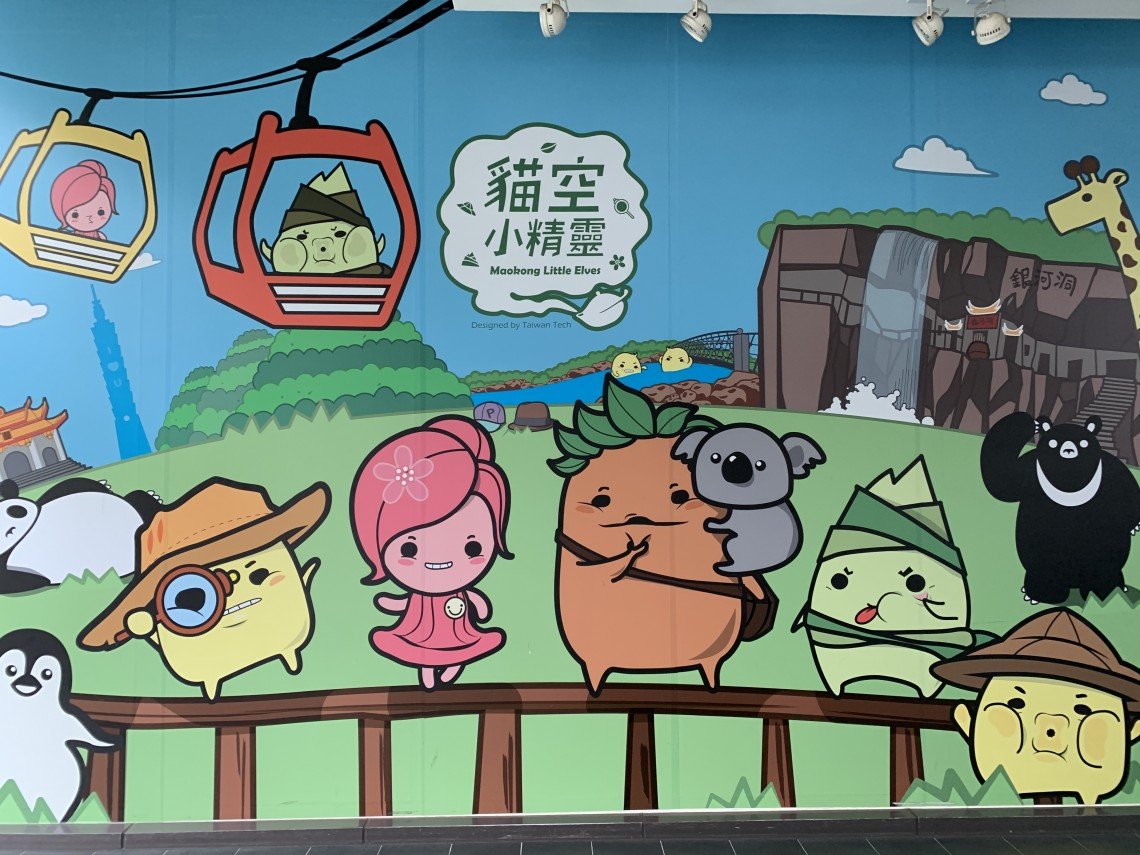 The Maokong Elves are here to help make your journey a fun and enjoyable one. Which elf is your favorite? 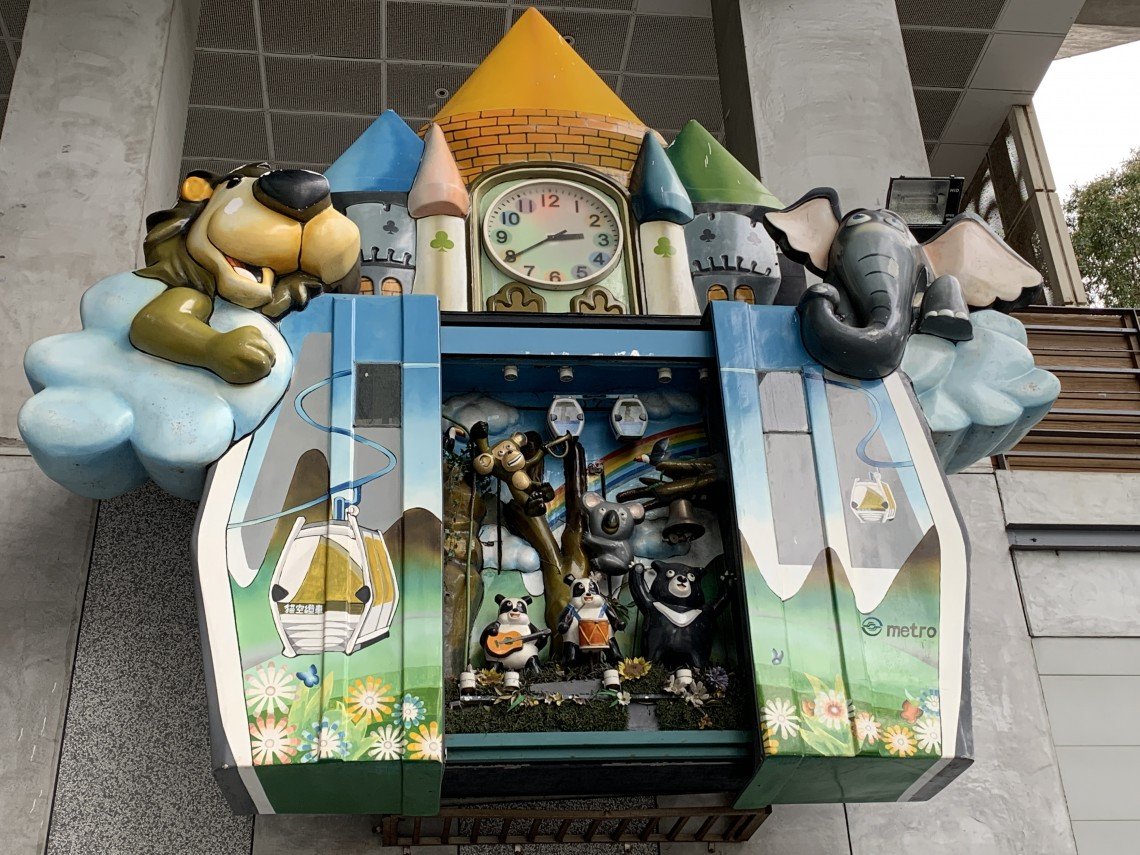 Right before we entered the gondola station, we were greeted with this huge art piece. I think it’s mostly a clock, but it was still fun to see. 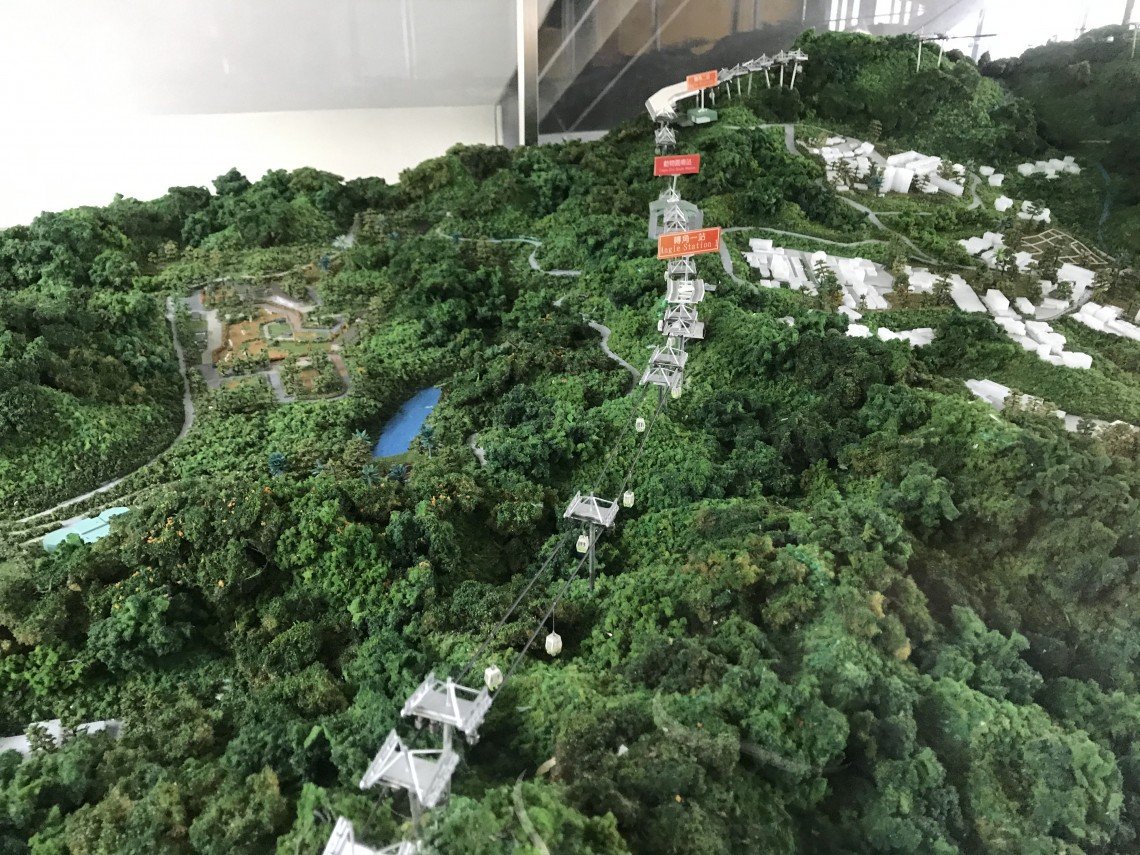 On the way to the top of the station, there was this cool model which showed how the gondola makes its way to the peaks of Maokong. Notice at the top of this image that the gondolas actually turn at one point and that there are multiple stations including the Taipei Zoo South Station, Maokong Gondola Angle Station Two, Maokong Gondola Zhinan Temple Station, and Maokong Station. 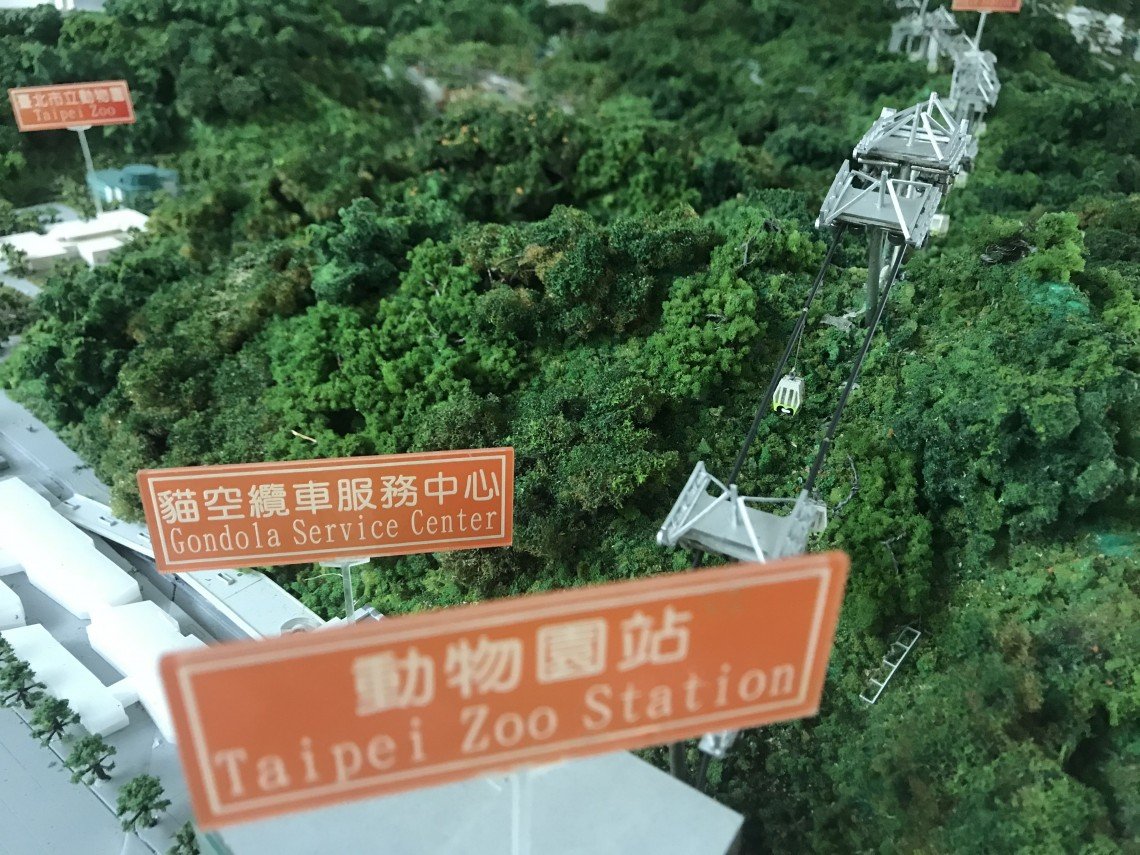 Though you’re able to stop along the way, the stop you probably want to make it to is the end of the gondola line, Maokong Station (貓空站 / mao kong zhan). Maokong Station drops you off in the heart of trails, tea shops, and restaurants. The station also has a convenience store and an info desk with assistance in various languages, should you need some direction. 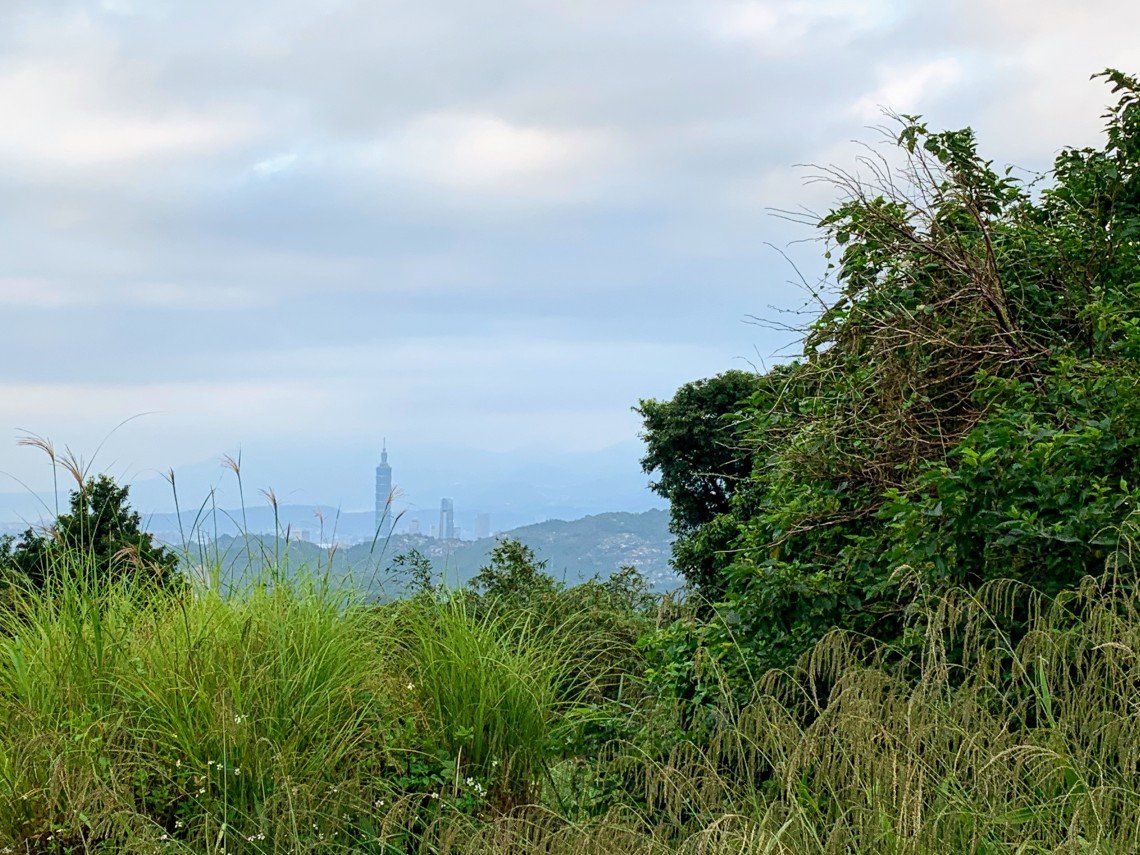 The views from Maokong are amazing. You can see Taipei 101 in the background here. I can imagine it would look even more amazing if the weather wasn’t as overcast this day. 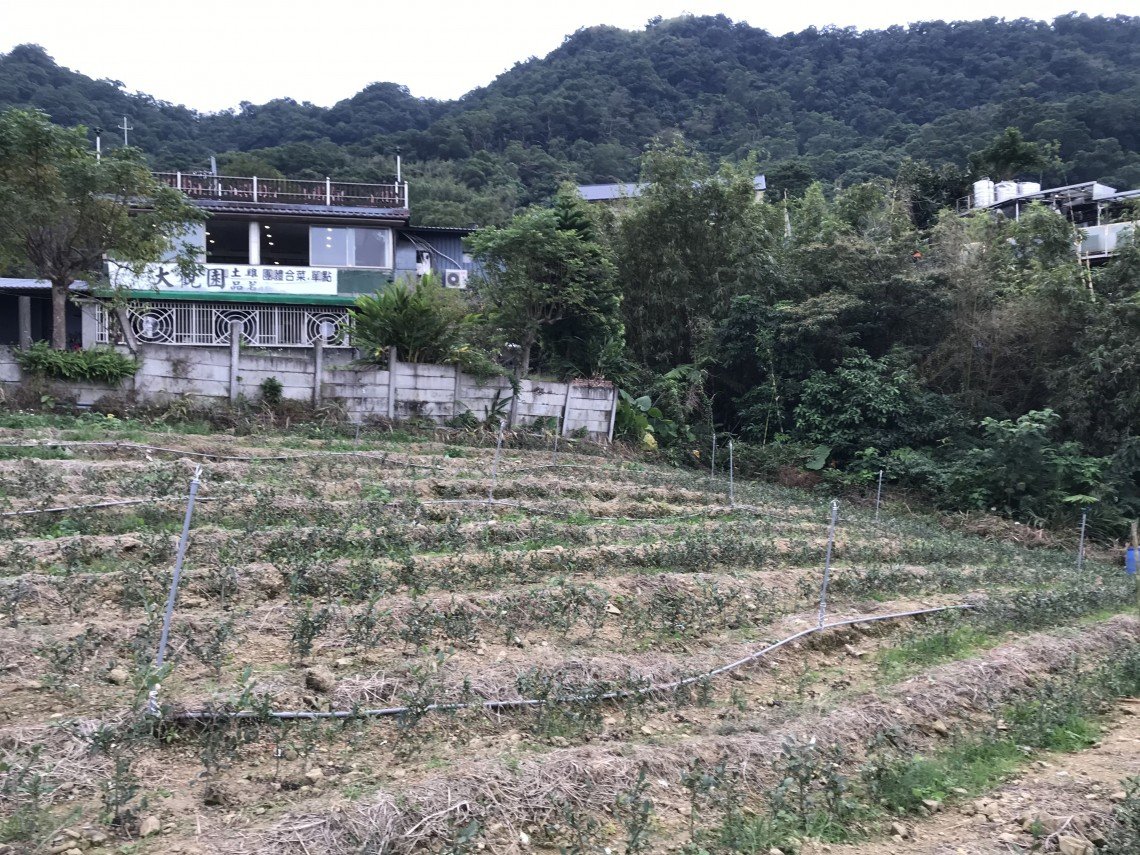 After getting our bearings and a few suggestions from the info desk, we headed first down Zhangshu Trail (樟樹步道 / zhang shu bu dao)—due right from the station. You’ll pass a few houses with tea farms, many that look like the photo above. 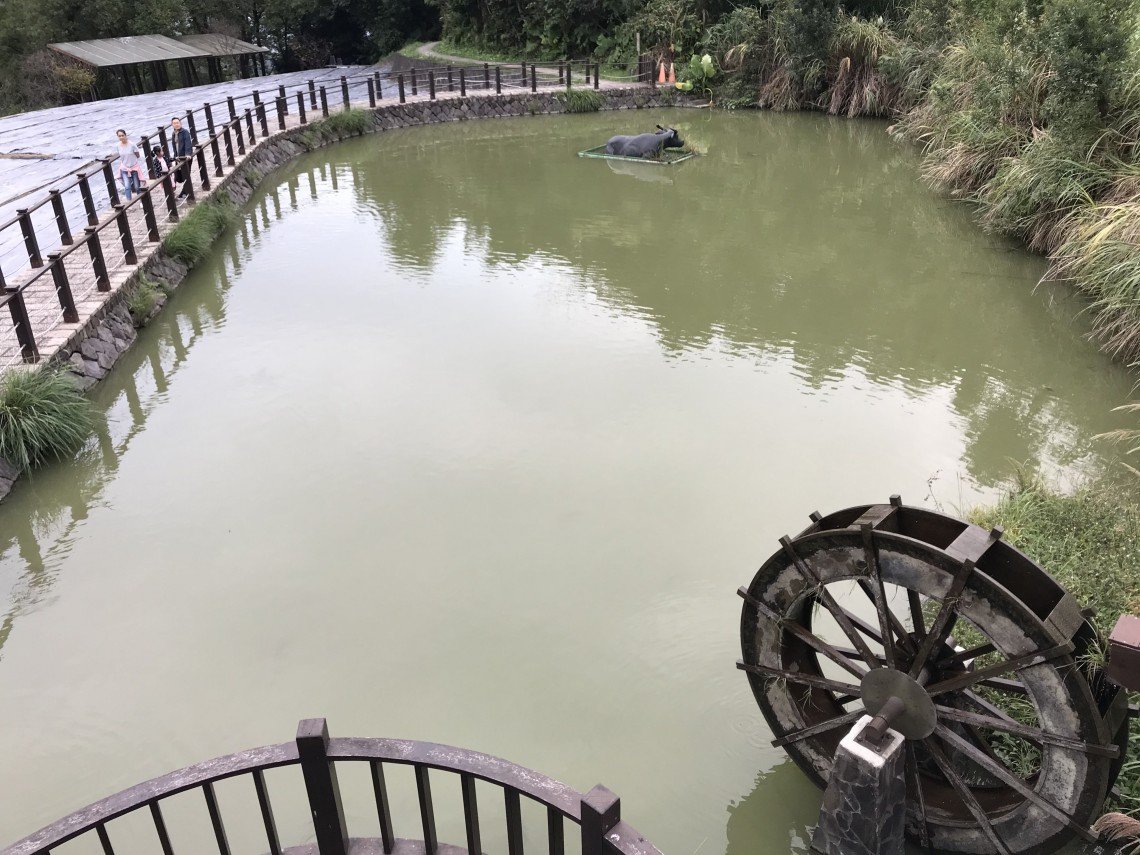 After walking a short distance down and taking photos along this very picturesque trail, we realized we were on the wrong trail. The trail we actually wanted to take is called Yinhe Cave Hiking Trail (銀河洞越嶺步道 / yin he dong yue ling bu dao). To get to the start of this trail, we had to get back to the main road and continue down a little farther. We were told to go up the hill once we found a cat sign. 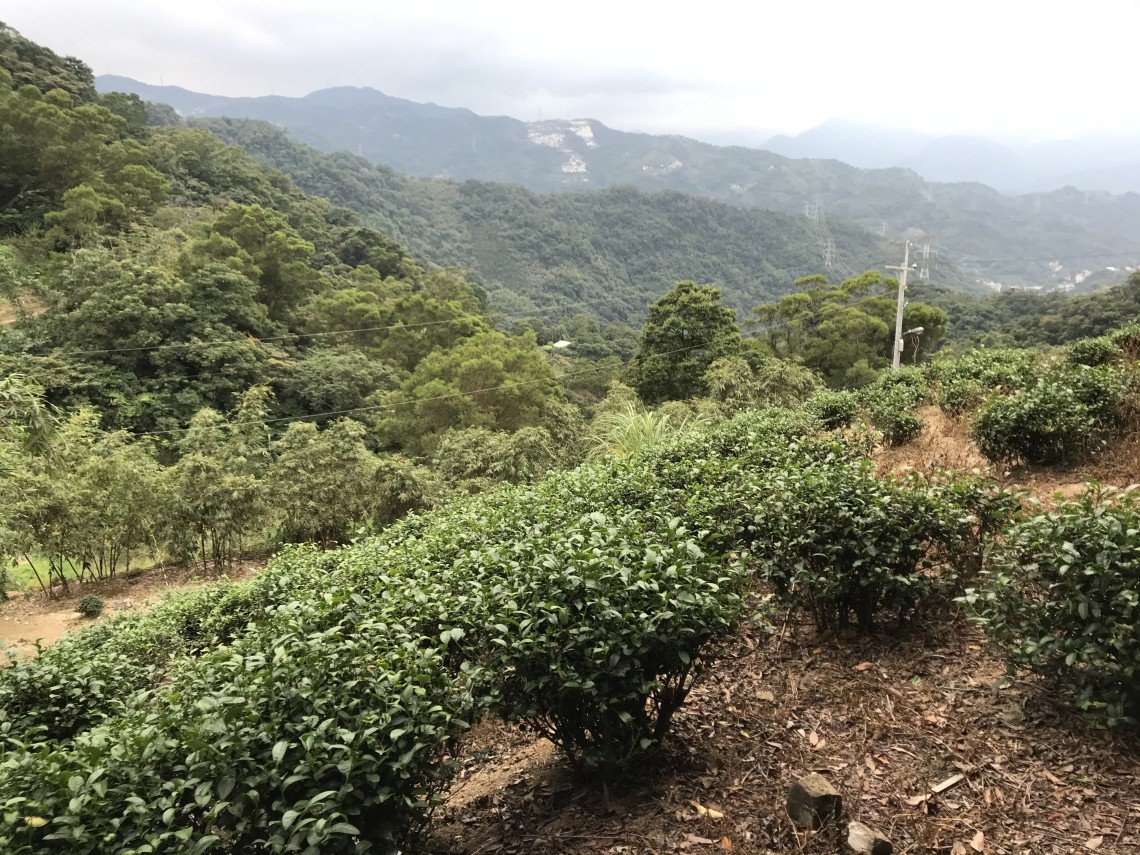 This windy trail took us to the top of the other side of the hill. This is the view along the ridge. To get to the cave at the end of the trail, you have to trek down into this valley. The trail runs along what look like family dwellings attached to farms.

Though we were speed-walking all the way down, the lack of people on the trail in the early evening made the trail seem very empty. Moreover, where there was supposed to be a cafe on the map, there wasn’t one. As the sun started to set, out of an abundance of caution, we decided to turn around and head back before it became pitch black. We were probably a few minutes before we would have seen the cave, but better to be safe than sorry.

Will have to come back again, another time, to check out Yinhe Cave. 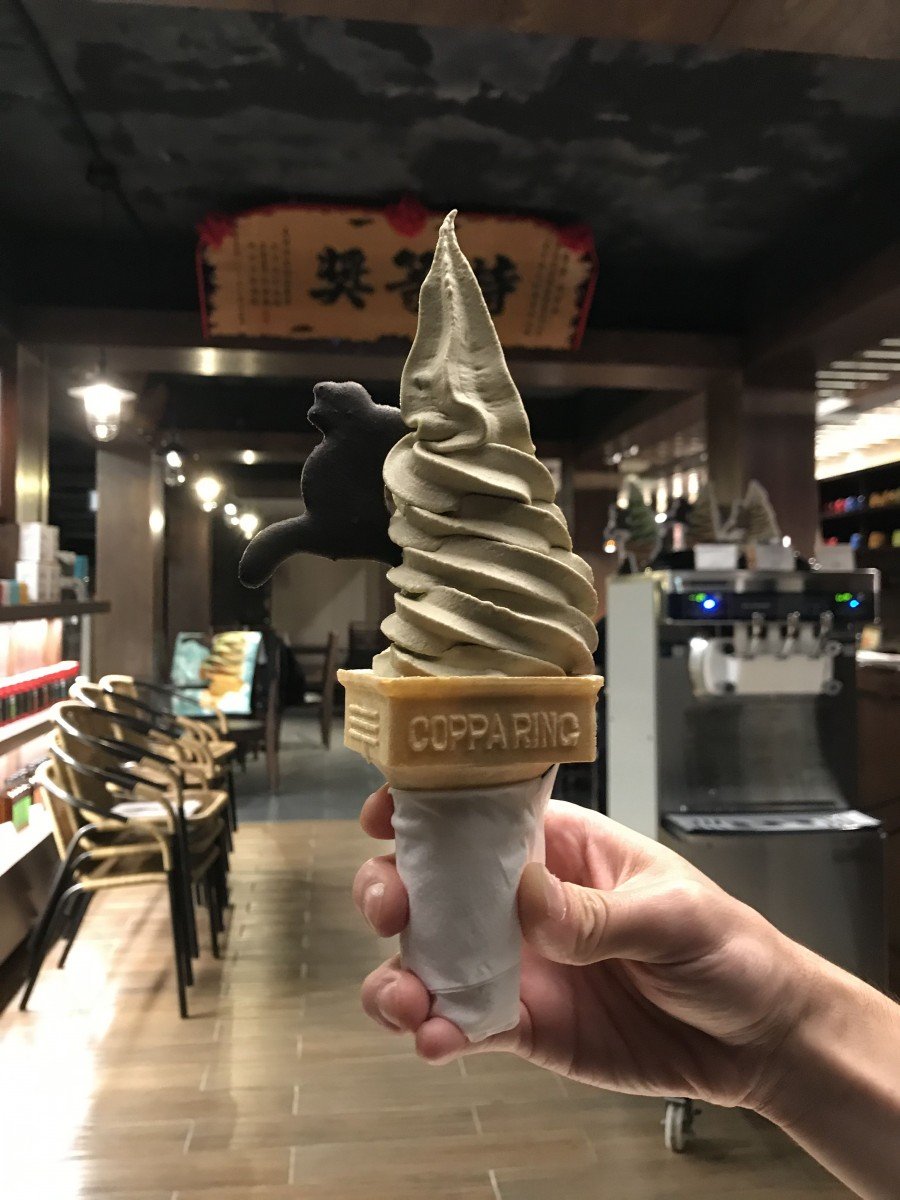 After running back at times, we finally made it to the main road with all of the tea shops along it. By this point, many shops had closed. We saw that one of the shops we wanted to stop by, Kuang Ting Tea Garden (觀鼎休閒茶園 / guan ding xiu xian cha yuan), was cleaning up, so we peaked in. They were still open to taking orders.

We got a Tieguanyin oolong soft serve in a cone with a cat climbing along it. Perhaps because of exhaustion, the flavor tasted even better than I would have imagined. 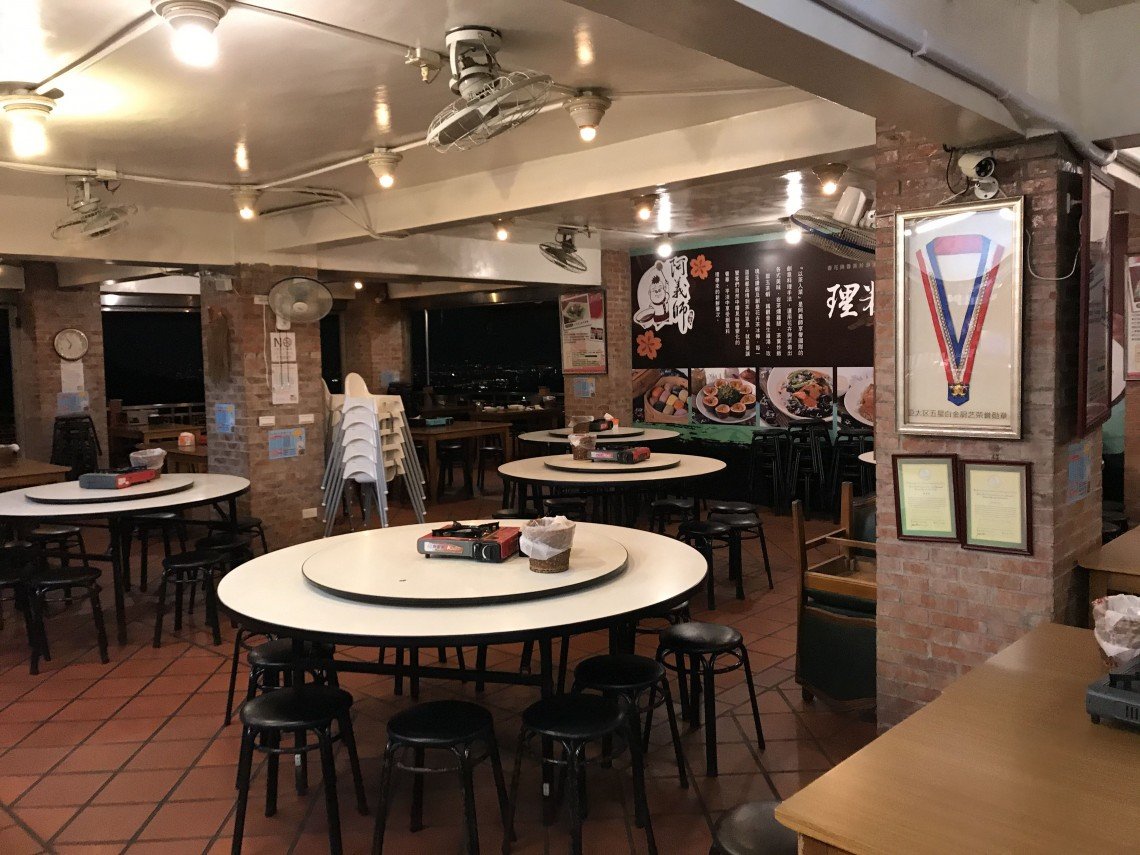 After eating soft serve, we made our way past Maokong Station, up the hill to see what piqued our interest for dinner. There were a bunch of flashy signs that flickered in the distance, punctuated by swaths of darkness. We settled on Big Tea Pot (阿義師的大茶壺茶餐廳 / a yi shi de da cha hu cha can ting) since the menu looked good. 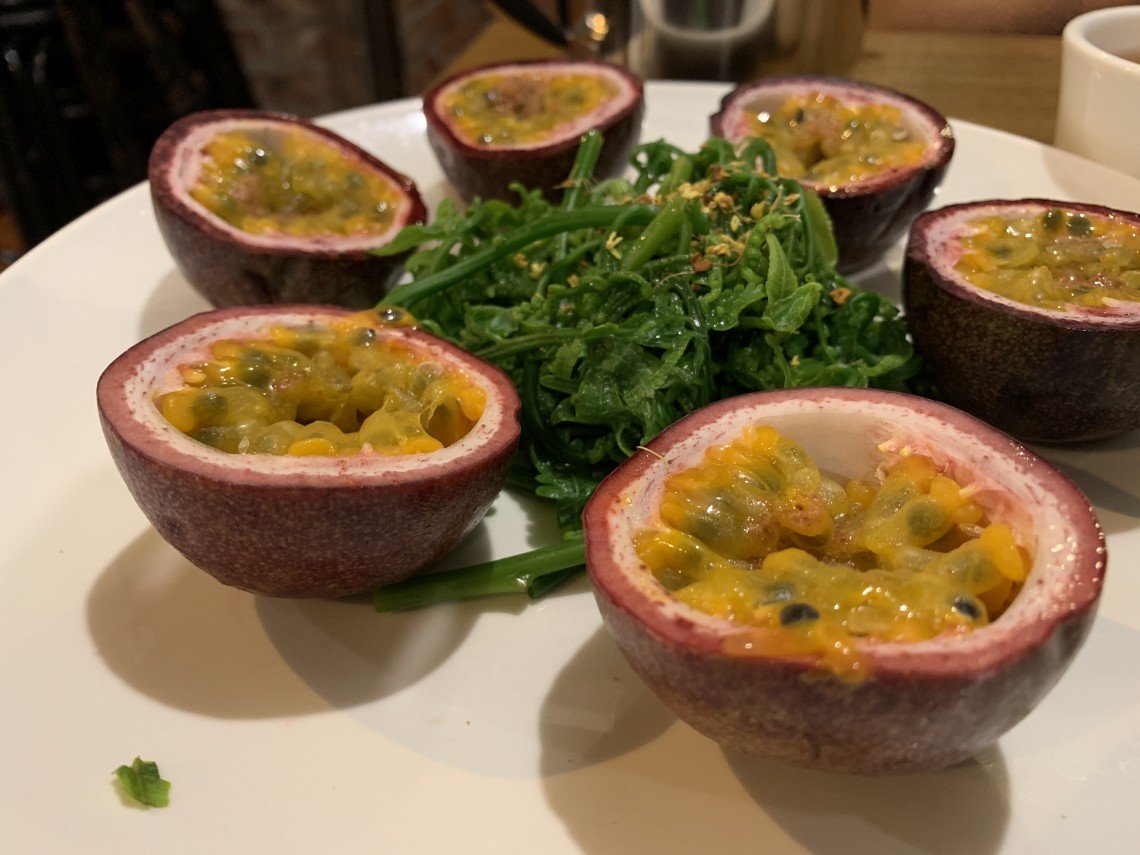 We enjoyed one of their specials, which allowed us to get four different tea-flavored dishes. The first dish that we got was a passionfruit salad with local fern and osmanthus syrup. You would take the passionfruit, mix it up a little, add in the boiled ferns, and mix it up again. You would then slurp it up with your chopsticks. It was different, but really good. 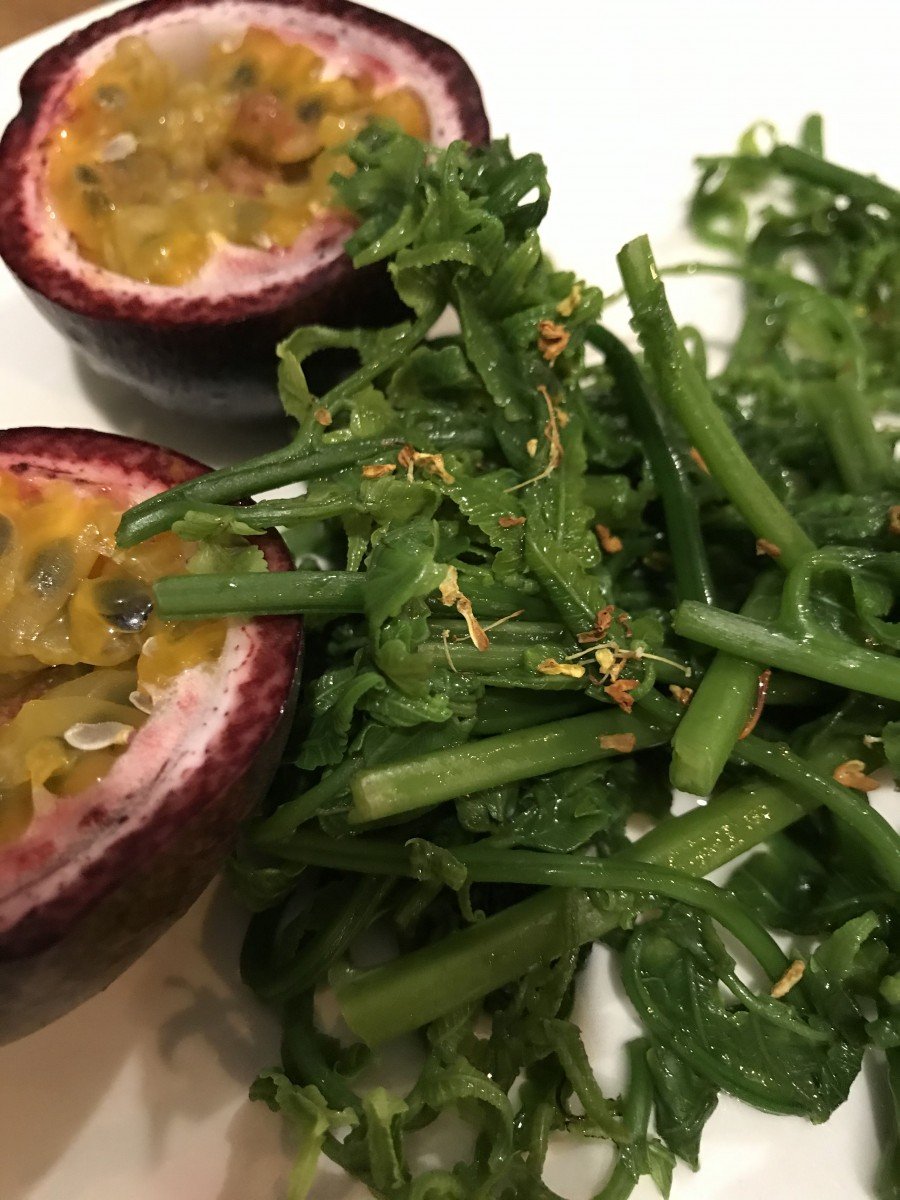 You can see the little osmanthus flowers on top of the wild fern. 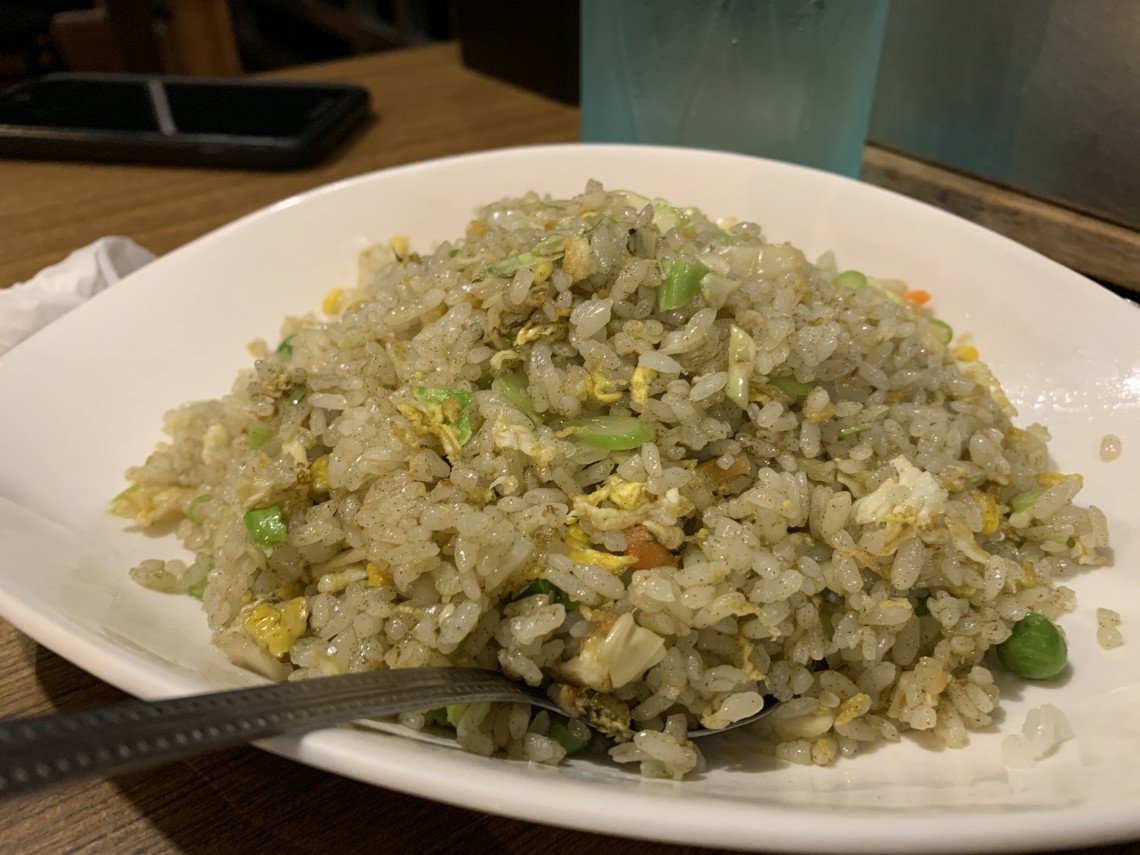 We also got tea-infused fried rice, which was also cooked in ground up tea leaves. Though tea is normally bitter, the savoriness of the dish contrasted well with the bitterness of the tea. 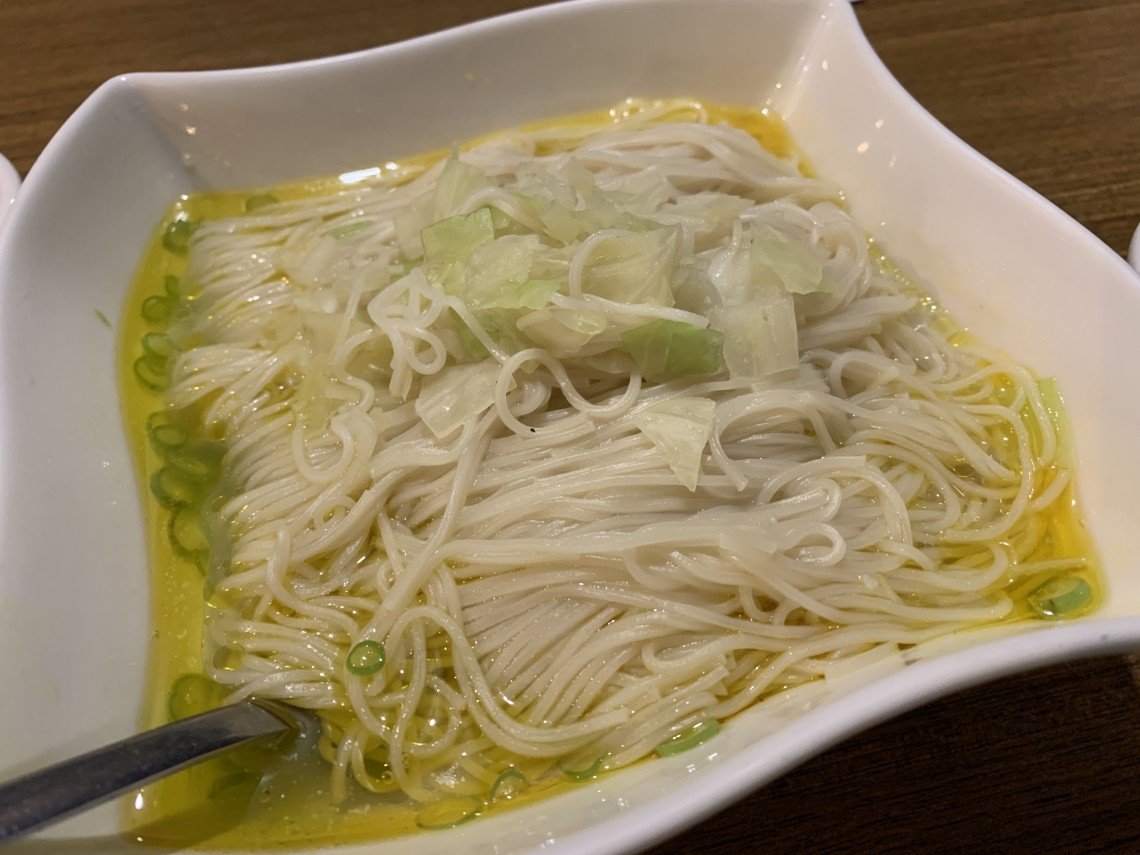 Here’s a noodle dish done in tea oil, that is oil from the camellia sinensis plant. The oil imparts a strong flavor that added depth to the lighter noodles. 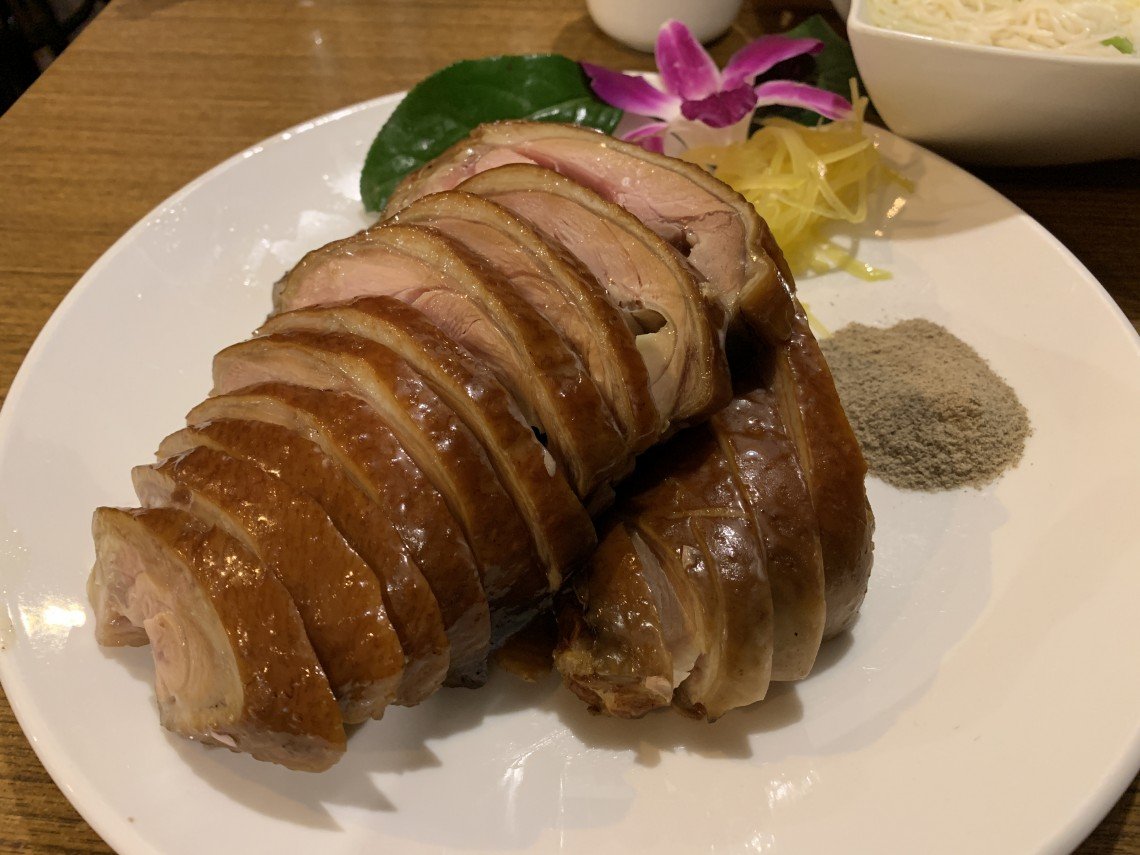 Lastly, we enjoyed tea smoked chicken. This dish reminded me a lot of the cherry pork dish that I had in Beitou.

The views from the restaurant were so nice and the food was great. I would love to check out other restaurants in the area, but I still highly recommend stopping by this one. You’ll know you’re in the right place when you see a chef mascot with a large beauty mark on his forehead.

As we made our way back to Maokong Station, we fully knew that the gondolas would not be running. We were prepared to wait for the bus, but there was another option available. There was a taxi cab that would pack cars with four people and send them down the hill. Because cars were filled before going down, this meant some waiting but not as much as waiting for the bus. Moreover, it meant that the ride down would be cheaper.

We only had to wait about five minutes before we were in the taxi, speeding down the mountain. The taxi driver dropped us off right in front of the Taipei Zoo Gondola Station where we were able to pick up the MRT and continue our journey.

Overall, I really enjoyed my visit to Maokong. The place felt like a more distant, more magical, more populated Pinglin—which I also recommend checking out. If you find yourself in Taipei with at least a half a day to spare, I would recommend taking the gondola up to Maokong and trying all the tea-inspired things.