If you ever find yourself in Taichung (台中市 / tai zhong shi), one of the things you have to do is pick up a box or, at least, try suncakes (太陽餅 / tai yang bing).

Taiyang bing are local Taiwanese desserts that are filled with maltose on the inside. The maltose is cooked until it becomes a thick, almost paste-like consistency. I remember the first time having it, I thought the inside was white bean that I would have enjoyed in a Japanese manju (饅頭).

Often, the outside in a flaky pastry that will leave you wanting a sip of tea. Because of the flaky nature of the crust, some even enjoy eating taiyang bing by adding hot water in a bowl and turning the cake into a kind of porridge.

I wrote more about the history of the taiyang bing in a previous post, where I also talked about what I thought was the best suncake in Taichung. I thought Amin Division (阿明師太陽餅店 / a ming shi tai yang bing dian) was the gold standard until I met a small bakery on the north-western outskirts of the city called Ruyi Sunny Cake (如邑堂太陽餅 / ru yi tang tai yang bing). 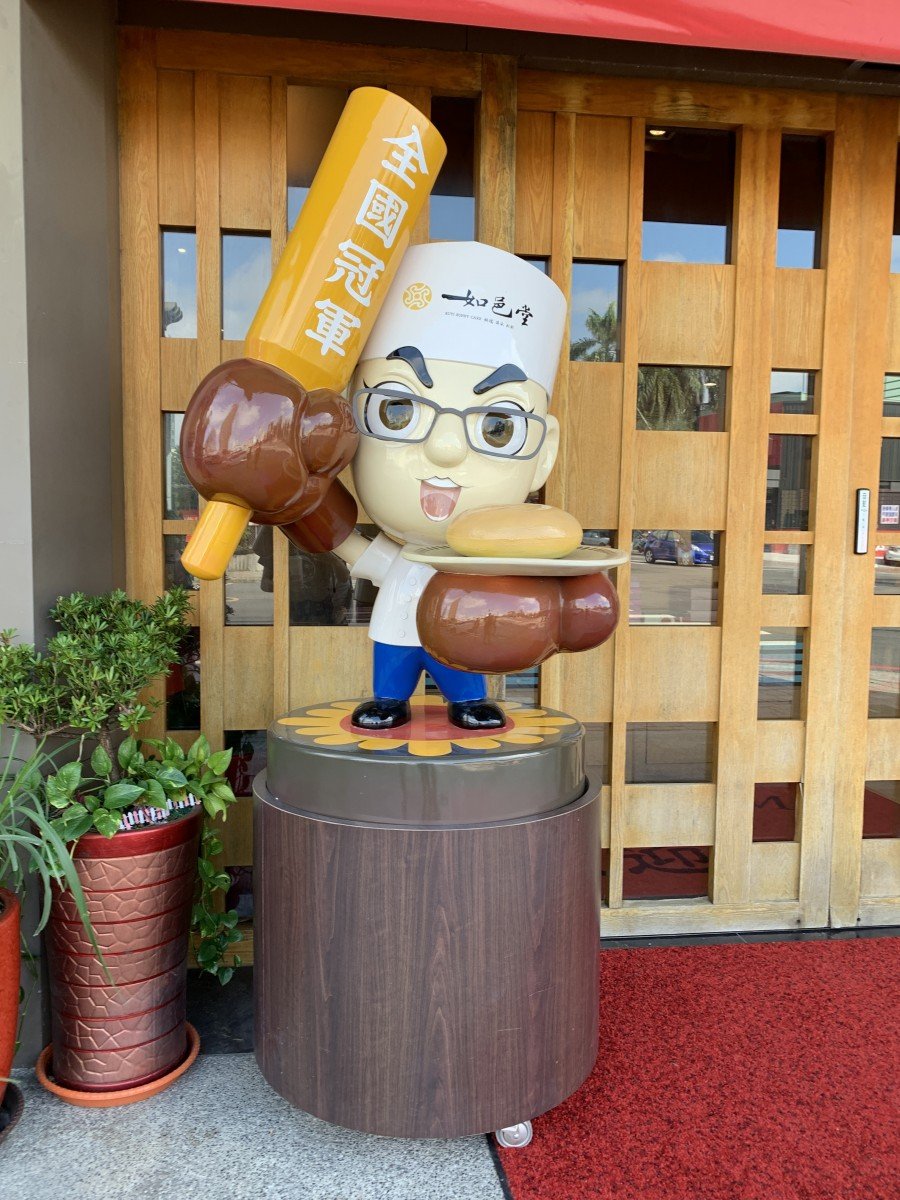 In traditional Taiwanese fashion, there was a mascot to greet us. I’m going to guess that he’s the founder or one of the bakers. His bat says national champion (全國冠軍 / quan guo guan jun) and he seems to be wearing boxing gloves.

Unlike many of the taiyang bing shops that I’ve been to, this one was quite spacious. There was easily room for multiple families to sit and enjoy various pastries while pondering exactly what to buy. 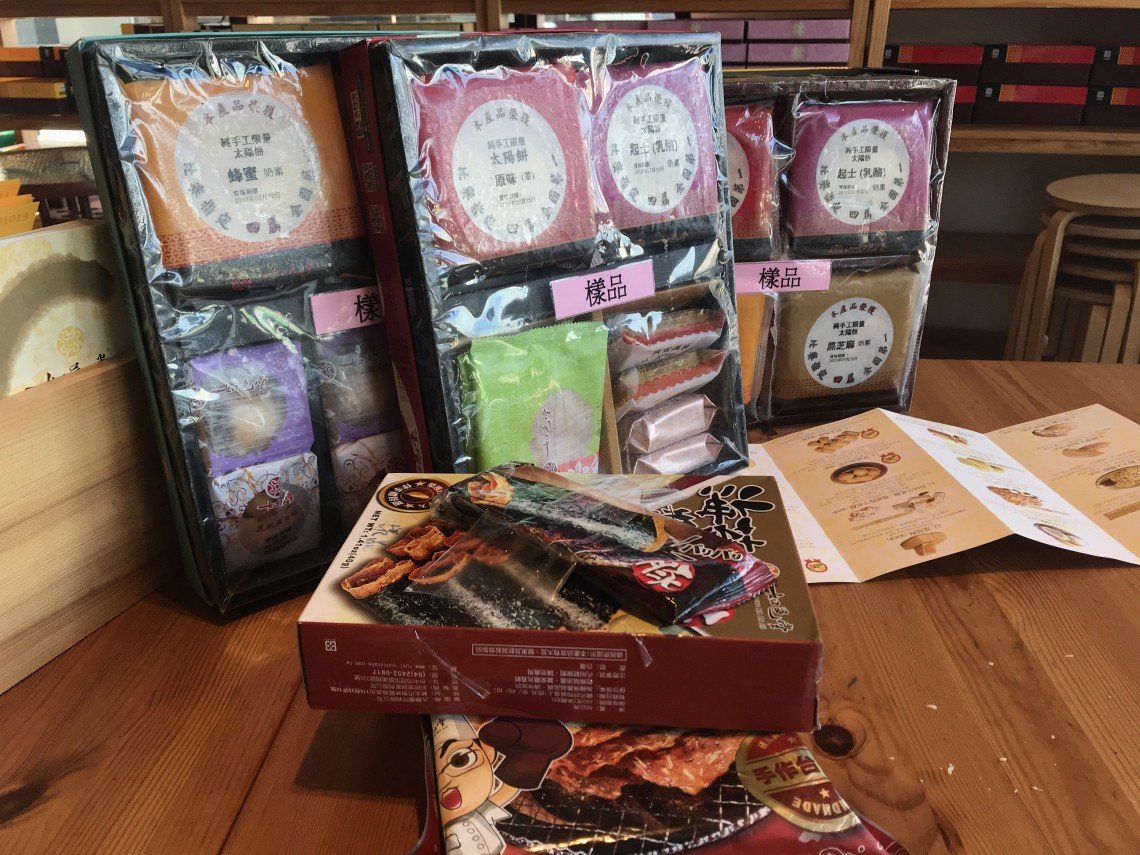 Once we sat down, we were given a menu. At first, we had a menu that was written in 中文. After I spoke some English, they were happy to give us a menu in English and also carry out the tasting in English. 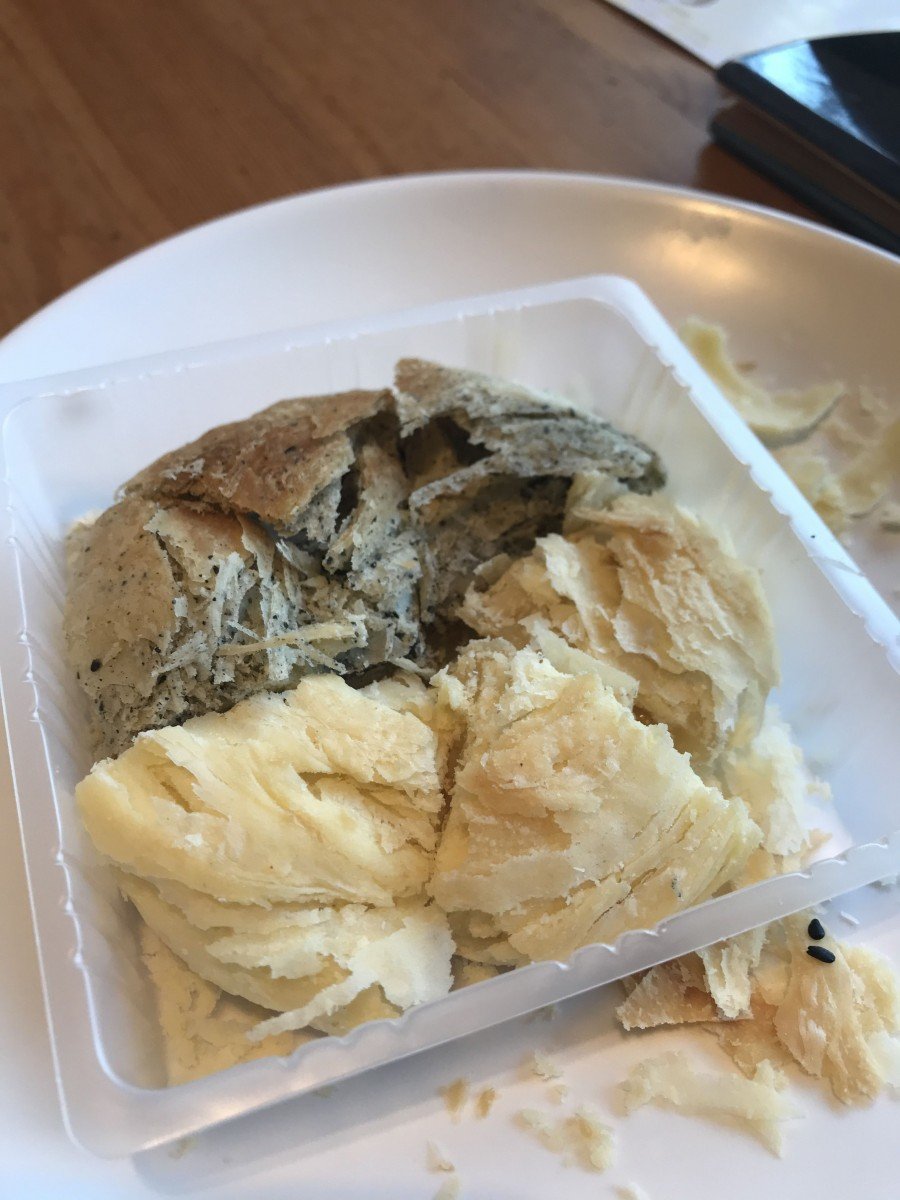 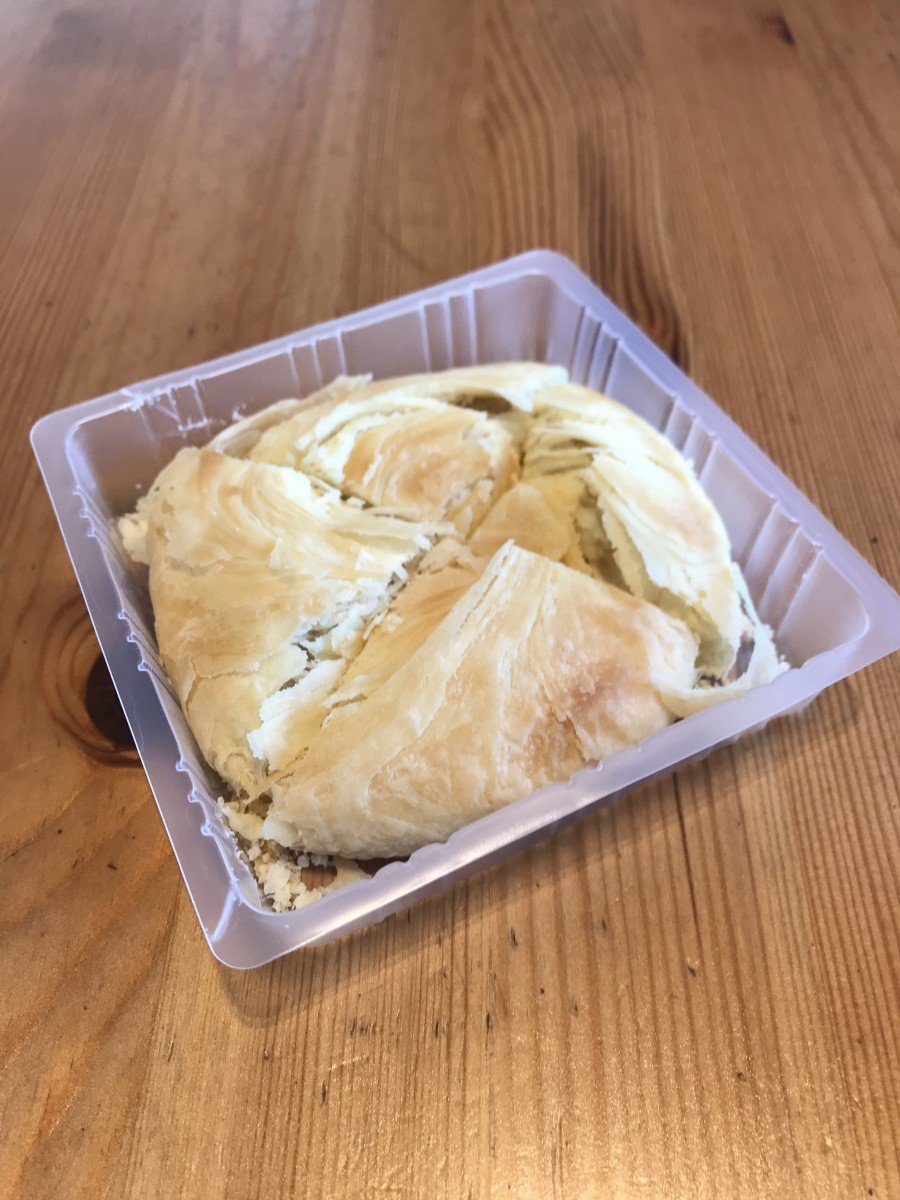 From beginning to end, I was impressed by the service and how generous they were with their sample portions. After going through all the samples, I felt like I no longer needed to eat dinner.

As for my impression of the pastries, I thought the pineapple cake and taro cake were decent. I still love the pineapple cakes from farther south in Bagua Hills area. Where Ruyi Sunny Cake really shines is their suncakes. 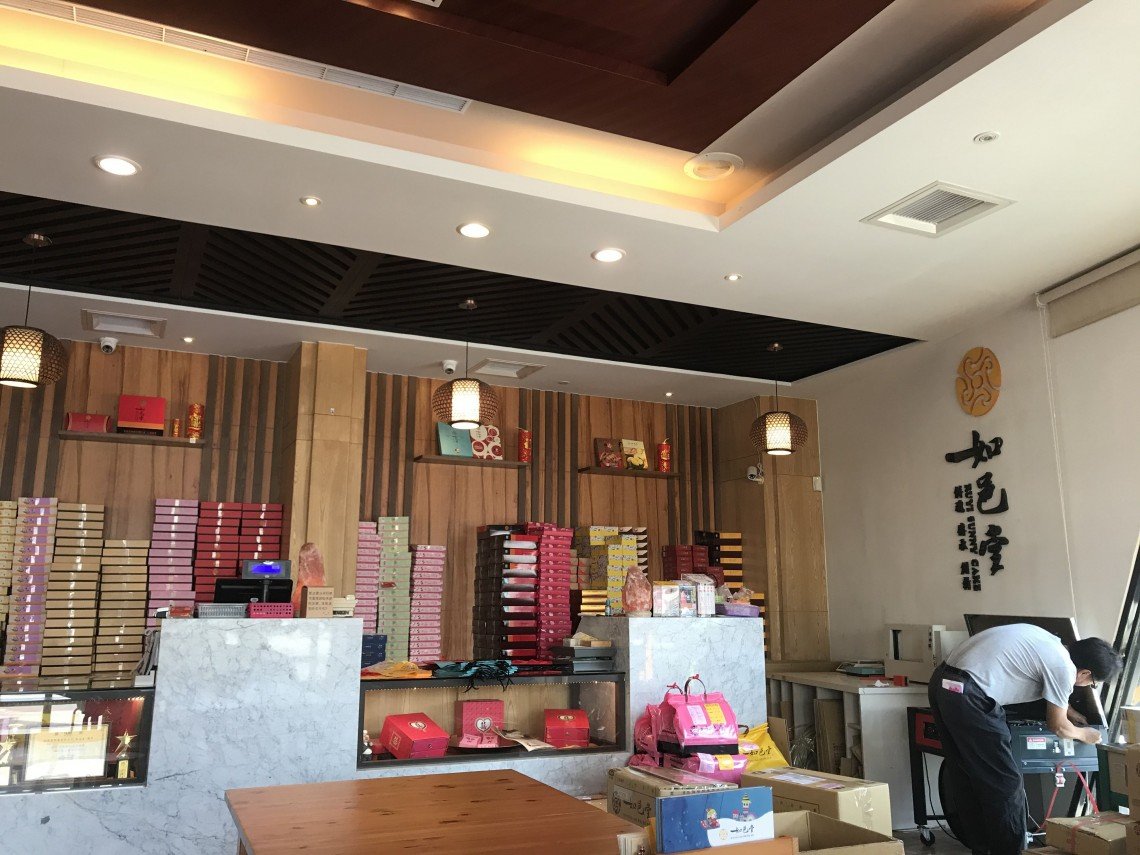 The suncakes were flaky, but not dry. They were flavorful, but not overly sweet. They were beautifully balanced compared to many of the suncakes you can get at grocery stores and at the airport. Compared to the honey suncake, I had at Amin, I might even say that they’re a notch above. 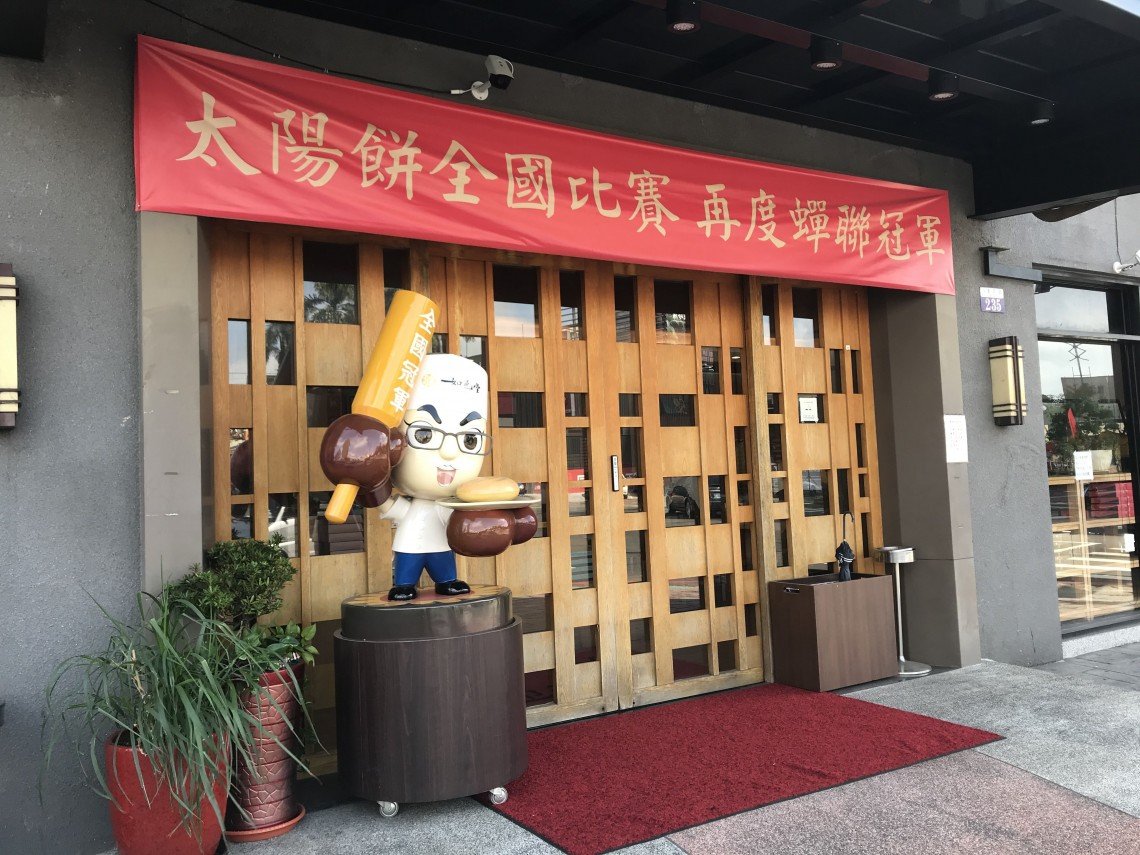 Probably the biggest downside is that Ruyi Sunny Cake is located far from the urban center of the city, whereas Amin Division is located in downtown Taichung. Both locations will not disappoint, but if you’re looking to let your tastebuds run wild in a more relaxed setting, definitely drop by Ruyi Sunny Cake in north west Taichung for amazing taiyang bing. Your tastebuds and your friends (if you manage to bring taiyang bing back to them) will thank you.

Taipei
What to Eat Near National Taiwan University’s Gongguan Station
Taiwan
What Lounge Access is Like at Taoyuan International Airport
Taipei
Traveling Back to 19th Century Taiwan: Bopiliao Historical Block