Being a long time Southwest customer, when I heard rumors of Southwest planning on extending routes to the Hawaiian Islands in 2018, I got super excited at the thought.

Earlier in March, Southwest finally opened up a series of flights from the the mainland to Hawaii (and inter-island). When I received the email to book, I immediately jumped on the opportunity to purchase airfare to O’ahu.

I recently went on my trip to Hawai’i. It was a lovely time.

I’ll share more about the experience and things I did in future posts, but for this one, I wanted to share my experience of what it’s like to fly on Southwest to Hawai’i—specifically between the San Francisco Bay Area and O’ahu.

I don’t really recall why we chose a 5 PM flight, but we took the 5 PM flight out of Oakland. The process here wasn’t that much different than standard Southwest flights. The main difference here was probably the clientele, what everyone was wearing, and check-in.

There were many couples and families with small children. I would normally expect to see these types of groups on their way to Disneyland via Santa Ana Airport (SNA), but instead we were all going to be on the same flight. Many people also dressed up in tropical patterns in higher than normal numbers. Unlike most flights where I’m able to score a “A” group boarding, even checking in on the dot, we got a “B” group.

We were still able to get a window seat and store our luggage in the storage cabin above, but the flight was completely full and we may have been slightly delayed while carry-on luggage was checked in.

Eventually, we were in the air.

After around 30 minutes, the fasten seatbelt sign was taken down. 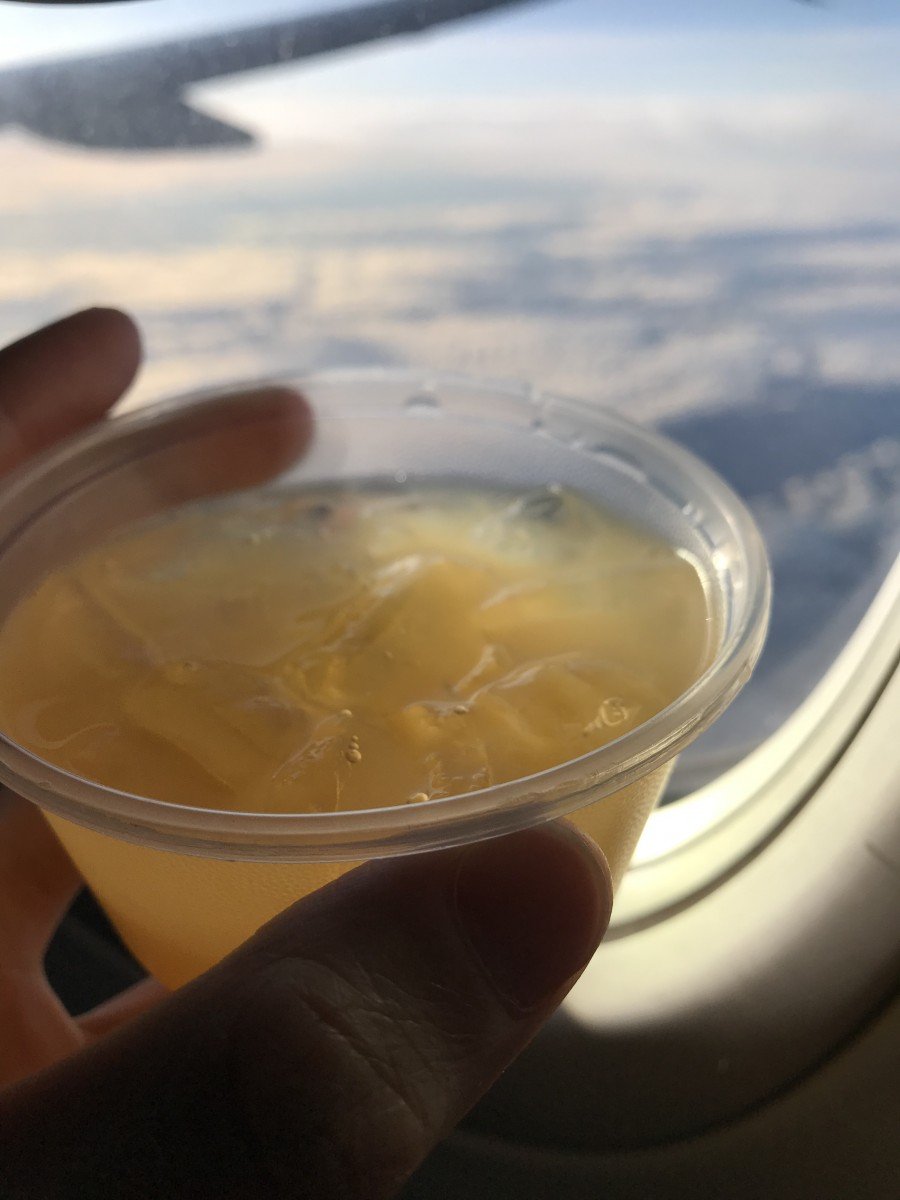 Naturally, I got the pineapple orange juice. It was a refreshing way to kick off the trip.

Around the same time that drinks were being distributed, flight attendants passed out a snack pack. Normally, passengers would just receive pretzels or peanuts so this was a welcome surprise. 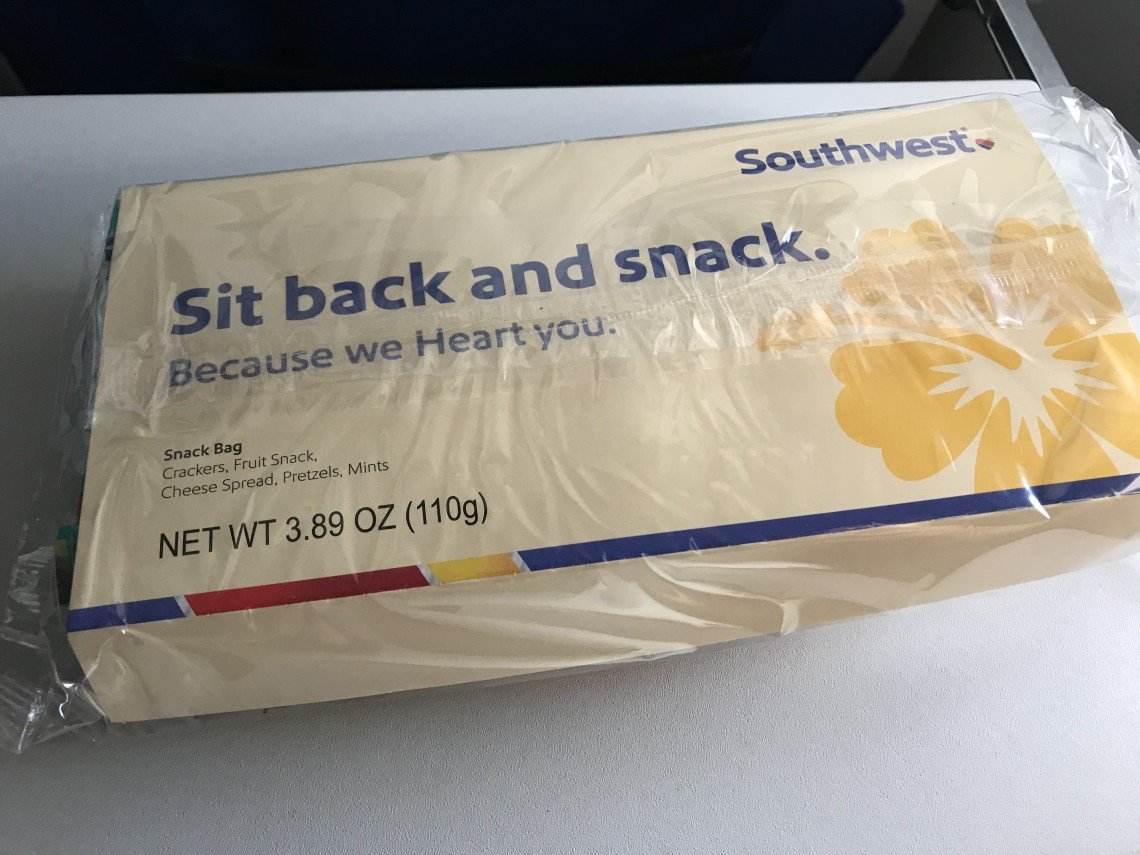 I did a little photo shoot of the items inside the snack pack. 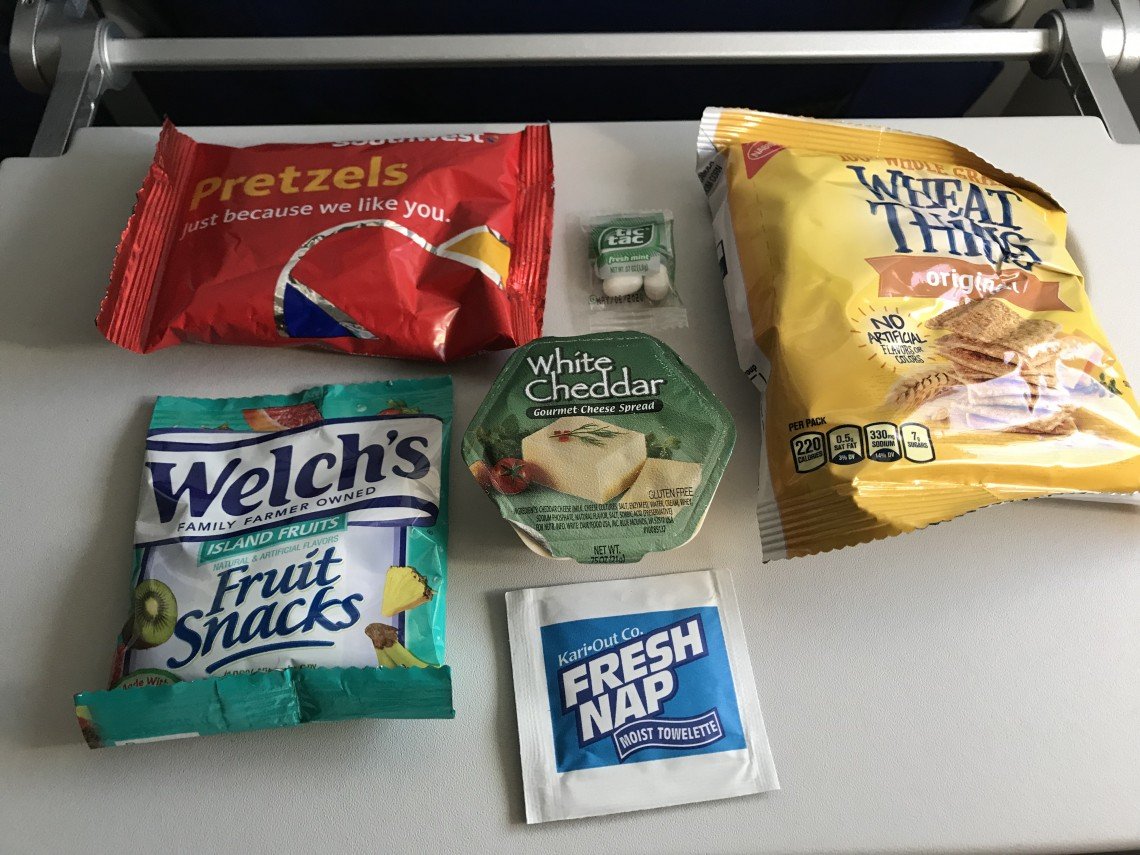 I haven’t had Wheat Thins in a while, so it was a fun little treat. I think I was most amused by the Tic Tacs (which I didn’t even know came in such a tiny package). 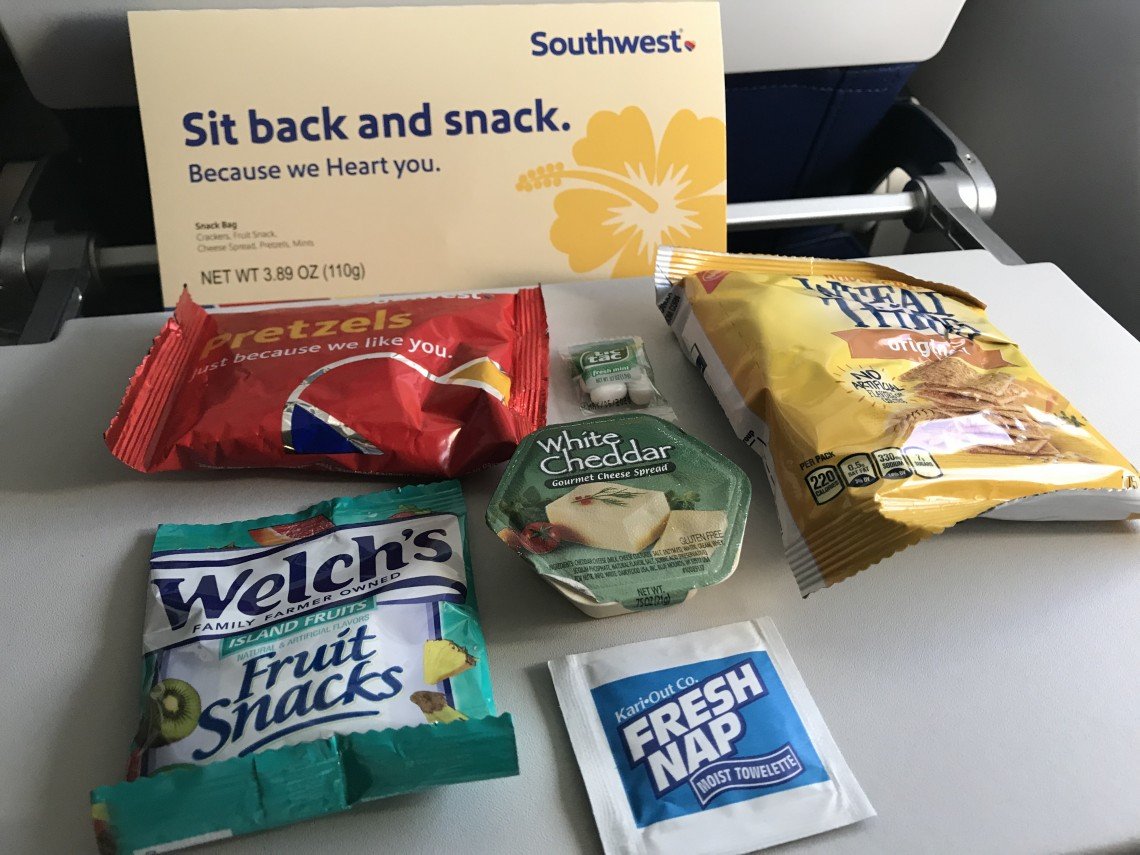 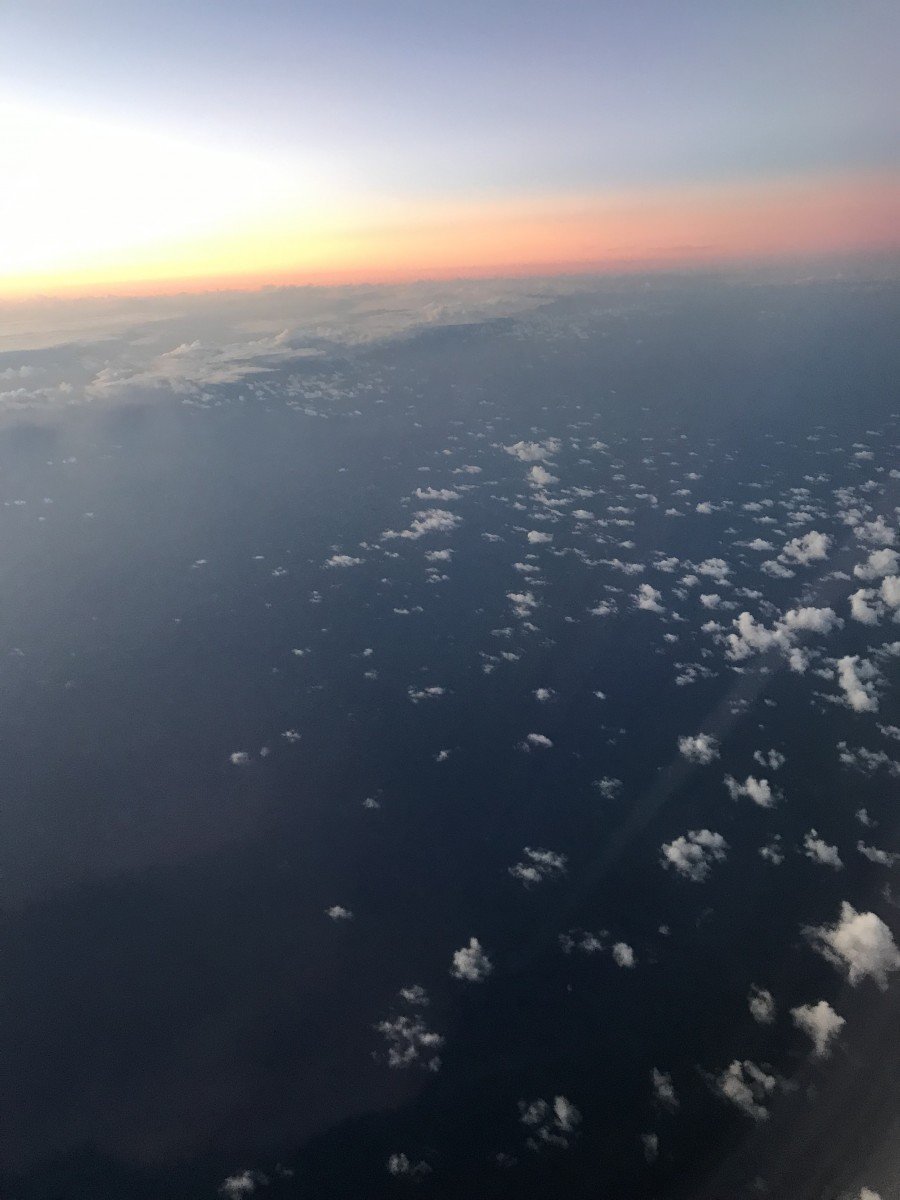 By now, the sun was setting over the Pacific Ocean. The lights in the cabin were dim.

Around fifteen minutes after receiving our drinks and snacks, flight attendants came back to pick up trash.

They later came by to offer a second round of drinks. This was followed by another snack, chocolate Milano cookies!

Some time into the flight, when most passengers were knocked out, flight attendants came by to offer a round of water or coffee.

With around 30 minutes to landing, the lights in the cabin were turned on as flight attendants passed out agriculture declarations and explained what to do. The cabin was abuzz with passengers filling out the forms.

Forms were collected and the cabin dimmed again in preparation for landing.

Almost as quickly as it began, we were in Hawai’i!

Perhaps because the service on Southwest is so new, Southwest lands at Daniel K. Inouye International Airport (HNL) in the international terminal. This means that you have to walk on the loud tarmac some distance through some cage-y area to get to the main building. 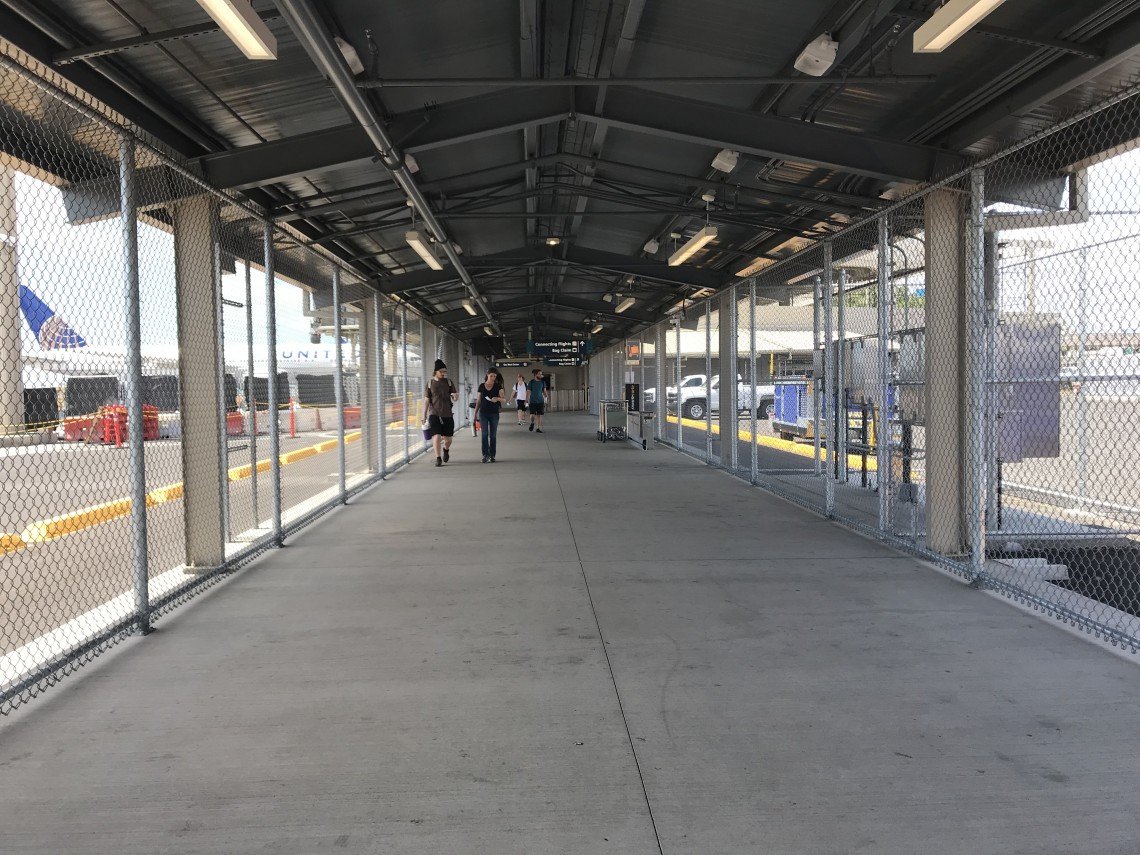 Once inside, the air conditioner blasts welcome relief from the heat. Because of where Southwest lands and where baggage pick-up is though, you have the option of taking the shuttle or walking a medium distance through sometimes open-air, but covered hallways. We elected to get on the Wiki Wiki Shuttle as it was parked right in front of us as we passed by. 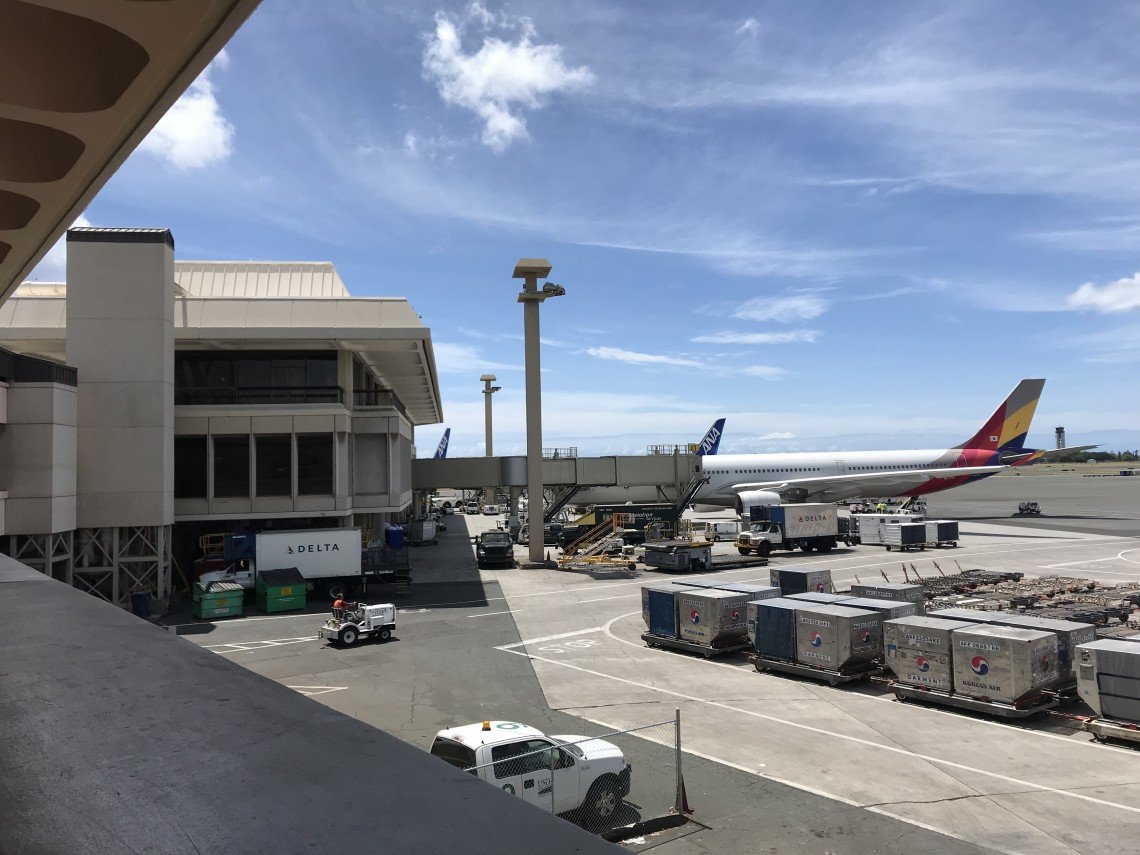 All-in-all, the experience was not too different from any other Southwest flight. Sure it was a lot longer than what I am used to (traveling between Norcal and Socal), but the trip managed to fly by quicker than I imagined. Southwest doesn’t have many of the frills that other carriers like Hawaiian Airlines has, but if the whole point is to fly with the care and service Southwest is known for, it hits those marks for me.

I can totally imagine taking another Southwest flight to Hawai’i in the not too distant future. Hopefully, you will too!