On Friday morning, a few friends and I set out from San Francisco in our Nissan Armada with 4WD to make the 4 hour trek to Lake Tahoe. Specifically, we were staying in a cabin in Truckee (a town due north of the largest alpine lake in North America).

Where two days earlier, the weather showed mostly clear skies with upwards of 2 inches of light snow, things quickly changed as we drove up. Reading the weather reports, we saw predictions of gusts up to 100 miles per hour and forecasts of between 24 to 36 inches of snow over the course of the weekend. 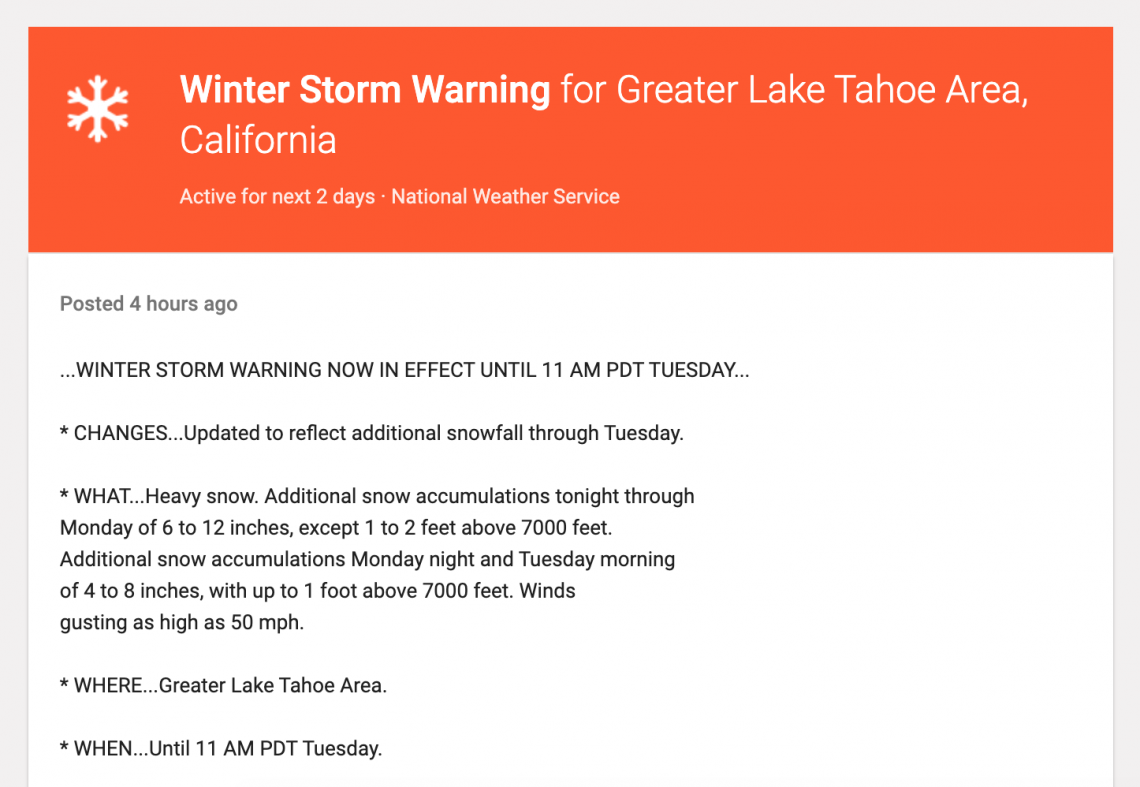 Resigned to possibly just staying in the cabin and not going out to any of the Lake Tahoe ski resorts, we pressed on. Pretty quickly got to Roseville (near Lake Folsom) where we did a quick pitstop for In N’ Out burgers and supplies at Costco.

The rest of the hour and a half drive to Lake Tahoe went by pretty quickly. 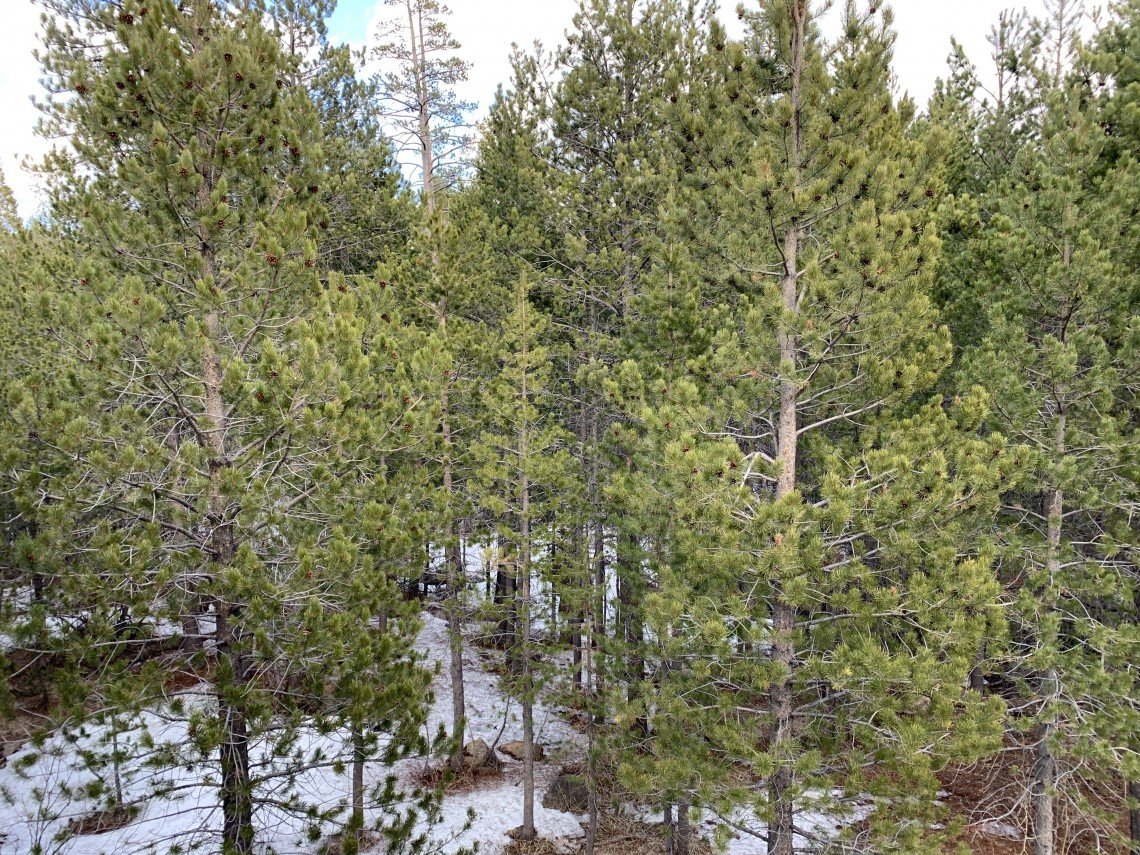 It was scenic with dark evergreen pine trees filling the landscape. Except for piles of dirty snow here and there, you’d never know the area was about to experience one of the largest downfalls of snow in months. 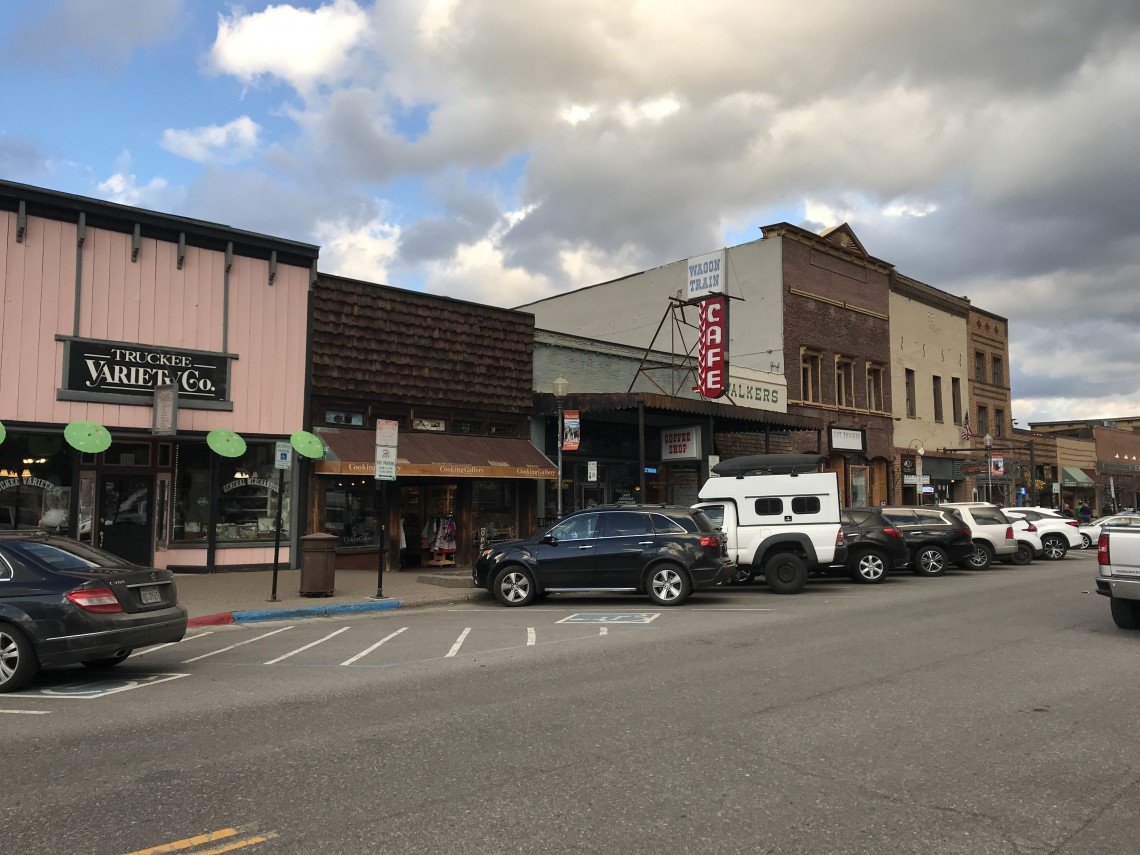 We checked into our cabin, a few minutes after 3:00 pm and got settled in. After relaxing at the cabin, we went to pick up our snowboard and ski rentals in Truckee downtown at Tahoe Dave’s. This was followed by a rather pricey dinner at the Truckee Tavern & Grill across the street from the Downtown Truckee train station. 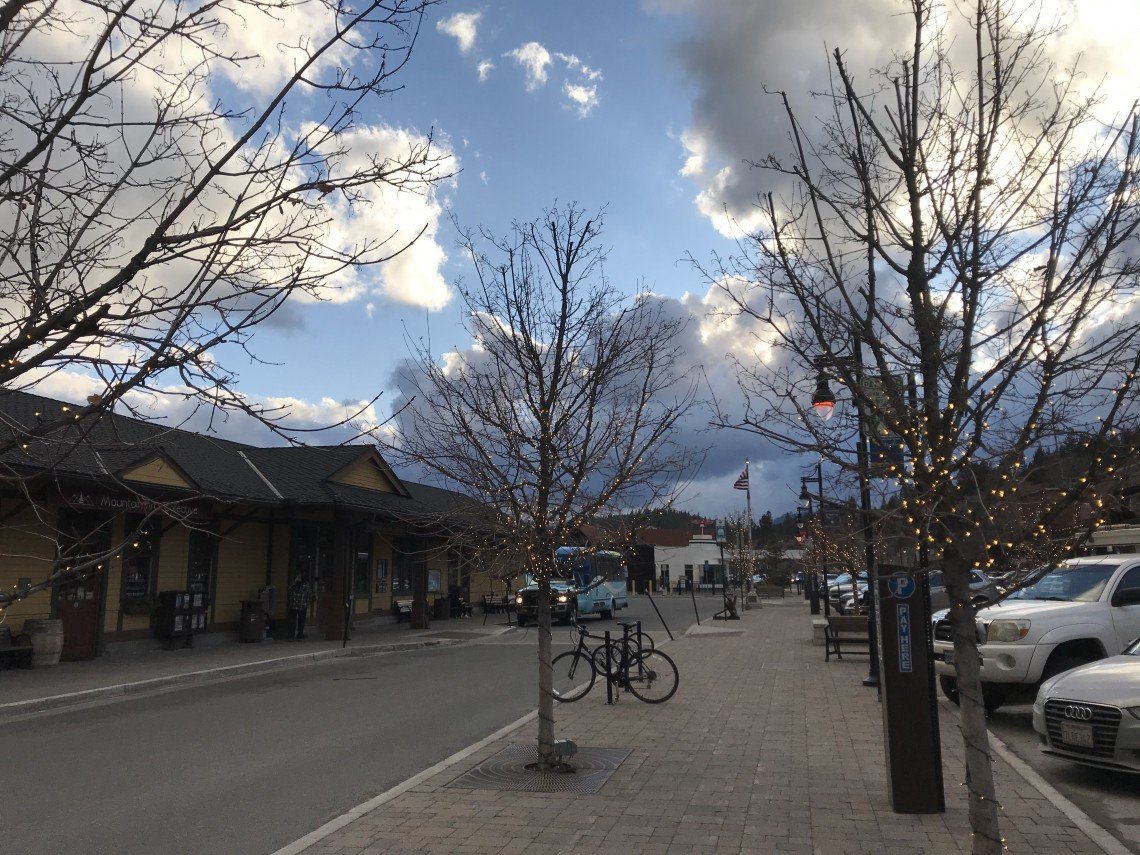 Where is Lake Tahoe?

A little primer for those who might not be familiar with the area.

Lake Tahoe was created as a result of volcanic and glacial activity ages ago. 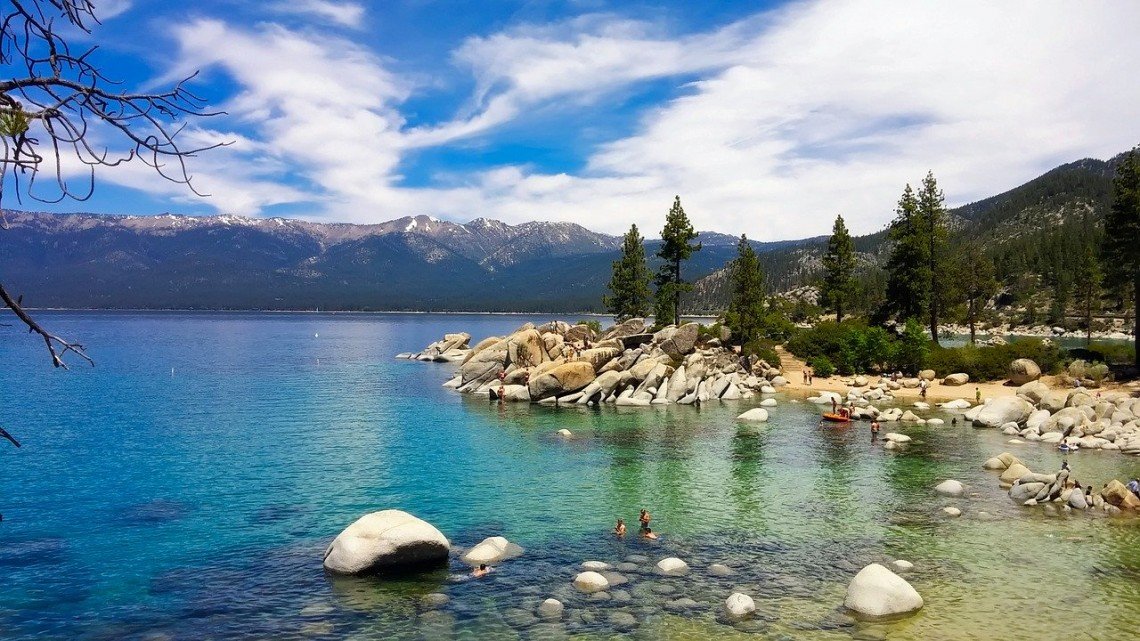 It is located at an elevation of 6,225 feet above sea level in the Sierra Nevada Mountains northeast of San Francisco and southwest of Reno. Lake Tahoe shares a border with both the state of California and Nevada.

Because the lake is partially in Nevada (a state known for its gambling), resorts and hotels on the Nevada side will often have slot machines and other forms of gambling.

One of the top things to do in Lake Tahoe during the winter and early spring is, of course, skiing and snowboarding at one of the many Lake Tahoe ski resorts. 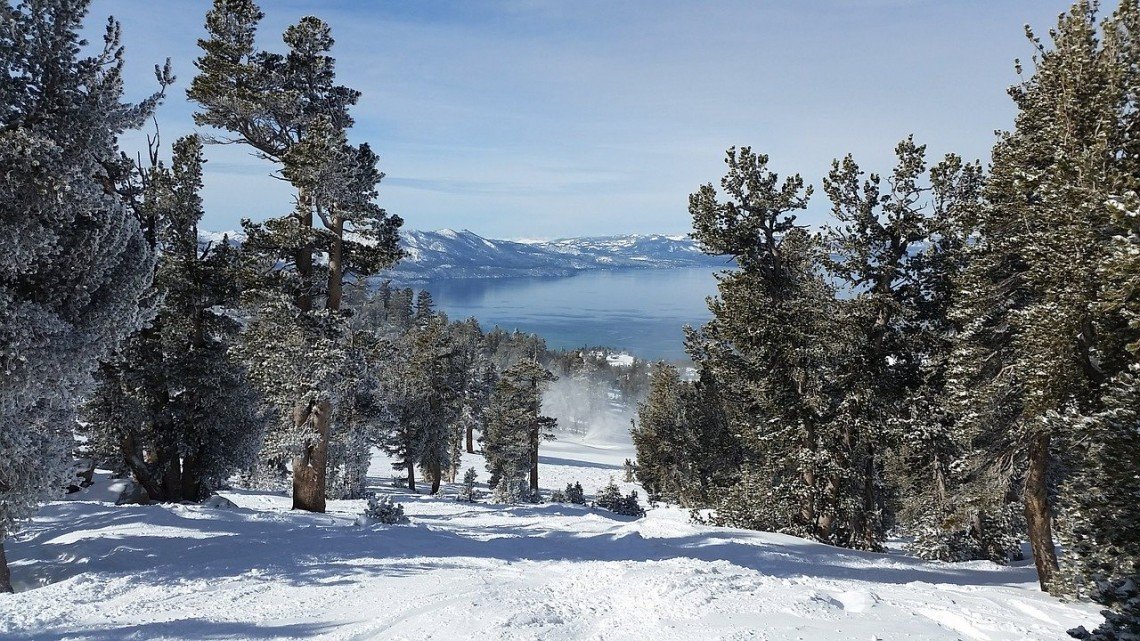 During the colder months, people flock to Lake Tahoe to take to the slopes. Even if it’s not always snowing, snow machines, cold evening temperatures, and the high elevation allow for a great deal of manmade snow.

This is what we were aiming for—sunny skies with snow left over from snow machines (as we planned our trip to be late in the ski season).

There are over a dozen major Lake Tahoe ski areas including:

In a future post, I’ll talk more about my experience snowboarding at Northstar in this storm.

Anyway, back to my story about the storm.

The other two cars full of friends made it shortly after we finished dinner. By now, the winds were coming in. I actually lost one of my gloves while exiting the car.

We all got settled into our rooms and played a few board games before calling it a night. We decided that we would try skiing at Northstar, unless the resort was closed. We resolved to wake up super early to check for closures and get to Northstar as early as we could.

The snow began to fall, ever so slightly.

After being waken up by an alarm, I quickly took a mostly cold shower (since the water did not yet have enough time to warm up). I dressed up in multiple layers, not knowing just how cold it would be at the resort, checked to see that the resort was open (only a few lifts were closed due to wind), and got everyone else organized.

Outside, there was a clear snowfall of a few inches. The wind was blowing quite noticeably. Occasionally, this would cause snow to fall off of a pine tree causing a translucent blanket of white. 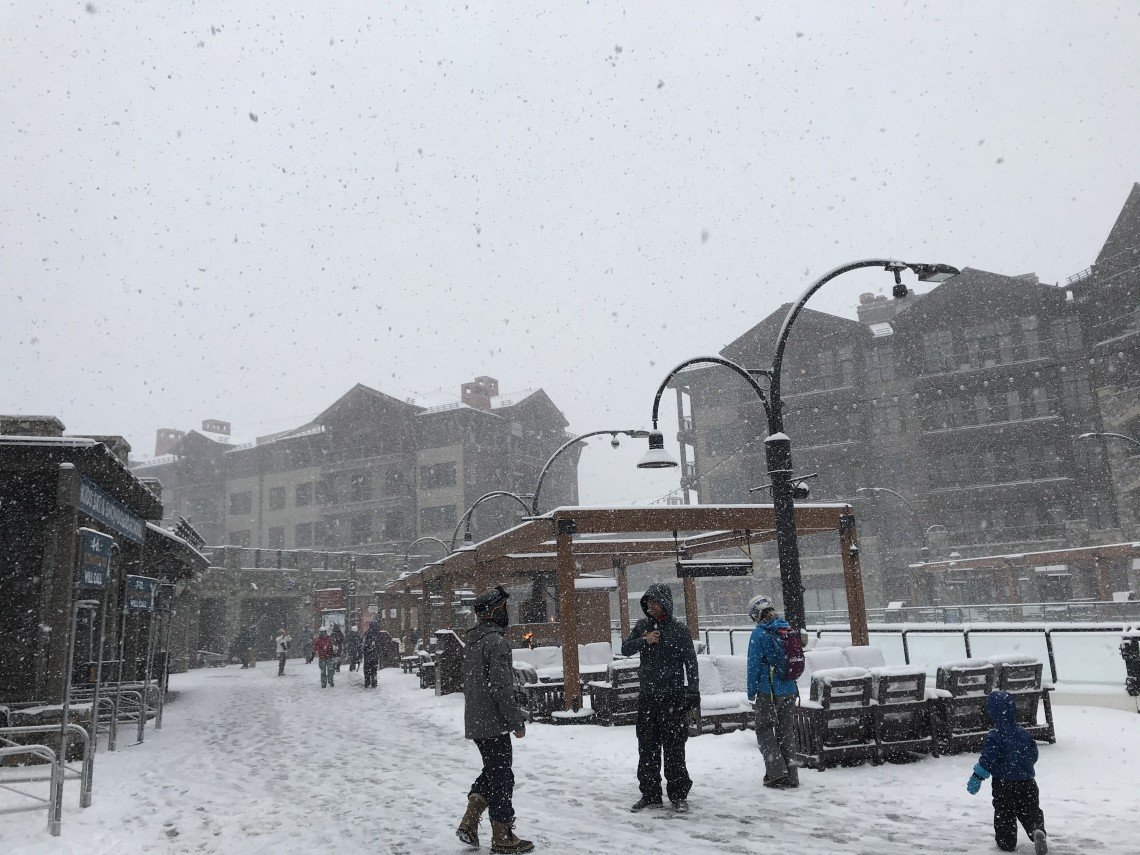 Though we intended on arriving at the resort at 8:30 am, with ski and snowboard rentals in hand, we ended up arriving closer to 10:00 am. A lot of this delay had to do with the fact that everyone was driving around 35 miles per hour.

We all did one run together and then people went on their own.

By this point, one of the cars decided to head back to the Bay Area. These friends skied from 10:00 am to around 1:00 pm before heading back to the cabin and scrambling back home. They were only able to get in two ski runs, but they also just managed to get out before roads were closed due to heavy snowfall.

For the last two cars, we were effectively snowed into the Greater Lake Tahoe/Donner Pass area with reports that closures could last through Monday morning. It was still Saturday.

Kind of eerie considering the history of the area and the Donner family. 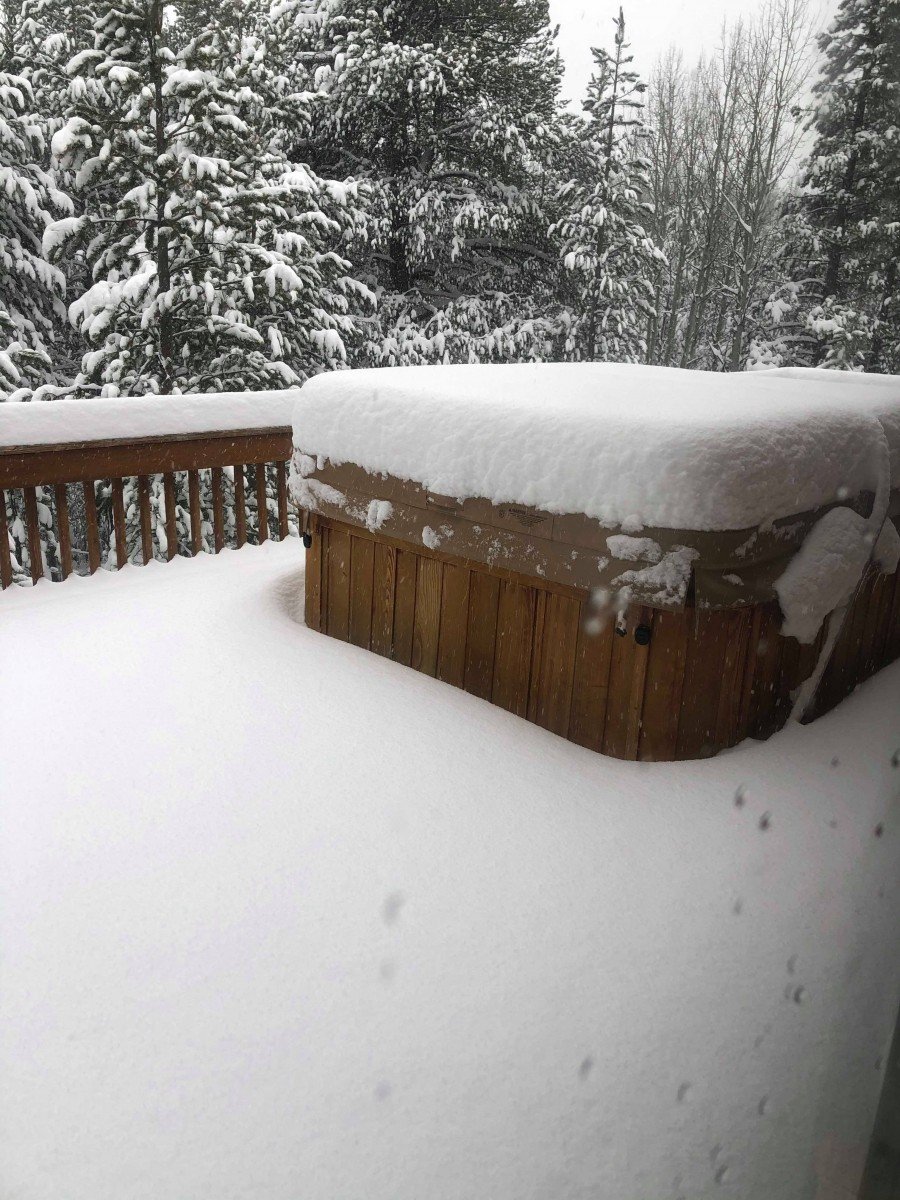 We got back to the cabin in Truckee around 5:30 pm, after dropping off our rentals. Many people took a warm shower, while I fired up the stove and got cooking. Friends later played Super Smash Bros. Ultimate, while others braved the cold to enjoy the hot tub under light falling snow. They had to snow shovel a path just to get to the hot tub.

The rest of the night included board games and pie as we recounted stories of our runs at Northstar.

We all fell asleep pretty early as we decided we needed to leave early in the morning to get out of Lake Tahoe.

Our group had planned to serve a home cooked meal for dinner and breakfast, so I woke up at the crack of dawn to prepare breakfast.

Little by little, friends came upstairs to have breakfast then help with the chores needed to leave our cabin. 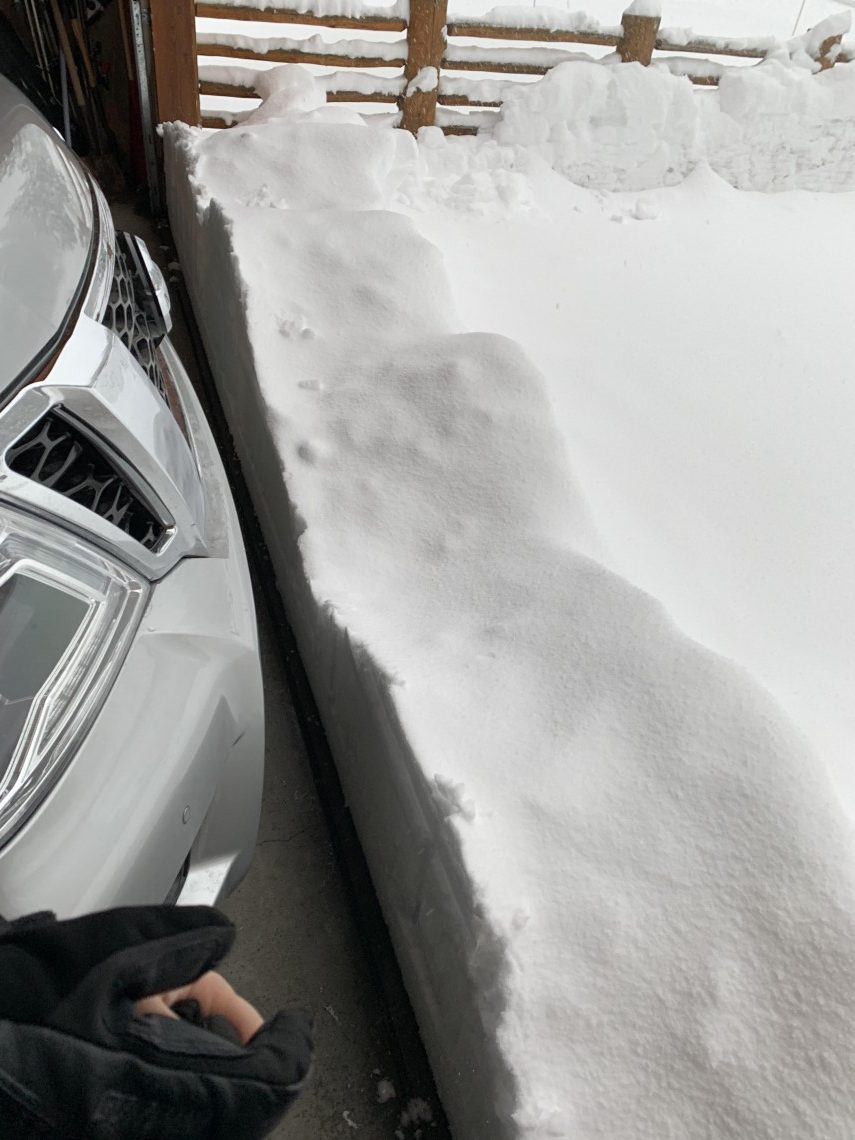 Linens were tossed in a pile, rooms were placed back in their former state, dishes were washed, snow was shoveled, bags were packed.

Even though a snow plow came by 30 minutes earlier, the snow was already a few inches deep on the road. This fresh snow actually made it easier for my friend to drive in—snow is okay, ice… not so much.

Our first stop was the gas station, in case we were stuck in a line of traffic for hours.

After gassing up, we attempted to get on Interstate 80, but the onramp was blocked to thru traffic. We followed the road east to try another onramp.

Eventually we found an onramp that worked.

After driving back to where we would have gotten on the freeway, we were stopped at a checkpoint. Officers were checking for snow tires and making sure that we were carrying chains.

Luckily for us, we had both as our Nissan Armada was equipped with snow tires and we picked up chains at the local O’Reilly Auto Parts the day before.

Despite the white out conditions, we were on our way, out of Lake Tahoe.

Driving at around 35 mph, to be safe and because we were driving in a caravan with a car that had chains on, we slowly made our way through Donner Pass and down the mountain. 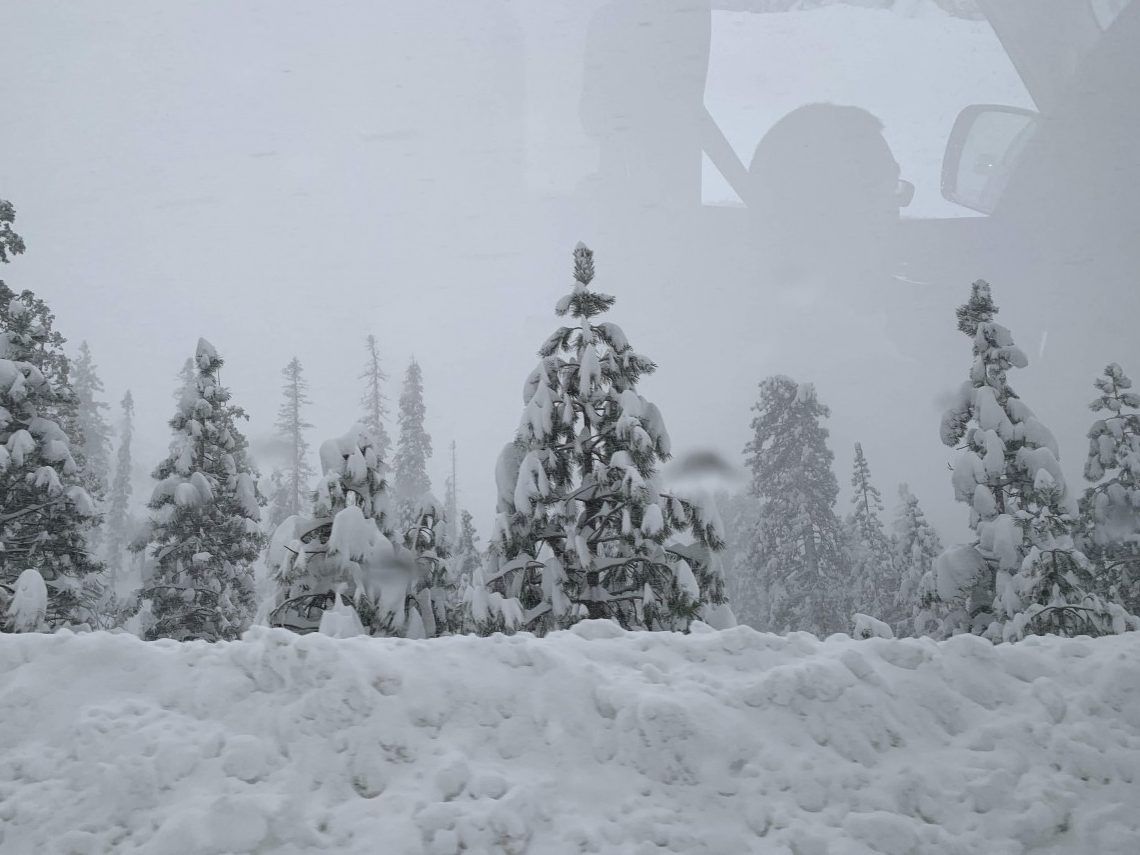 Sometimes, all my friend had to figure out where the road was were the piles of snow pushed to the sides due to the snow plows. Even then, when whiteout conditions occurred on the drive back to San Francisco, it became almost impossible to discern snowy road from embankment.

Multiple times, because our car was not equipped with windshield wipers for snow, we had to pull over to remove the ice built up on the windshield.

Many other cars also pulled over to remove ice, which otherwise made it impossible to see out of the windshield.

It was only until we got near Colfax that the snow started turning into rain, and pine trees started looking more green.

After a little over two hours, we were finally out of the woods, more safe, and on our way back home in rainy conditions.

Note 1: We used these resources to get home safely. They provided us with an up-to-date picture of what was going on with the roads. Actually an hour after we left, the roads were once again closed for almost half a day.

Note 2: the rating is for the Lake Tahoe area with snow. It’s nice and pretty. I wouldn’t recommend trekking in a snow storm unless you have proper tires, chains, and/or vehicle though. It can be super dangerous.

On the road back we saw probably 10 vehicles, including a large freight truck, that were stuck in the snow in some capacity. Another friend who was driving through from Reno actually got stuck and had to book a hotel last minute before making the trek the next morning.

If you do go to Lake Tahoe during a snow storm, be safe and use common sense. Another day and your safety is a small price to pay in the grand scheme of things.