If you’ve followed me along on my journey, collecting new experiences, you probably know how big a fan I am of tea. What you might not know is how much I love going to comic-book, anime, and gaming conventions.

Since 2012, I’ve had the pleasure of going to a variety of conventions in California, Washington, and even Canada. Though I know conventions are a big deal in the United States, it never really occurred to me that other parts of the world would have conventions. That is, until I stumbled on one in Taipei called the Taiwan Comic Festival (第三屆台灣漫畫節 / di san jie tai wan man hua jie).

I was showing friends around Songshan Cultural and Creative Park (松山文創園區 / song shan wen chuang wuan qu). We were about to go into one of the Taiwan Design Museum (台灣設計館 / tai wan she ji guan) when I noticed a couple of cartoon characters posted on boards in the main walkway. Soon enough, I saw cosplayers running outside of the warehouses. I signaled to my friends and we decided to go check out what was going on. 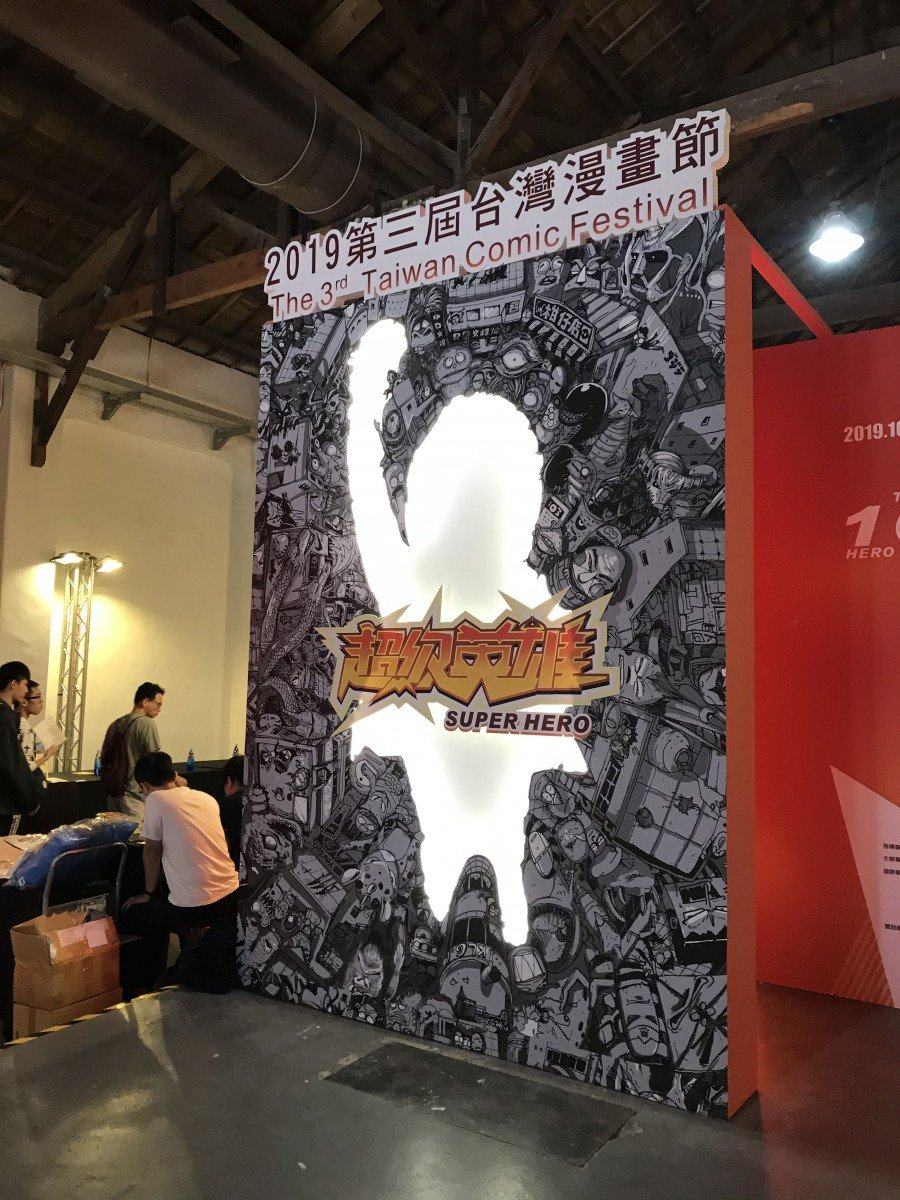 At first, I thought there was just some photoshoot going on between friends, but it turned out to be a local comic convention.

The comic festival was fairly small compared to conventions and expos that I’ve been to, but there were still some pretty large displays and big names. In total, it seemed to span a few of the warehouses. A majority of it felt like an artist alley with artist after artist tabling next to one another. 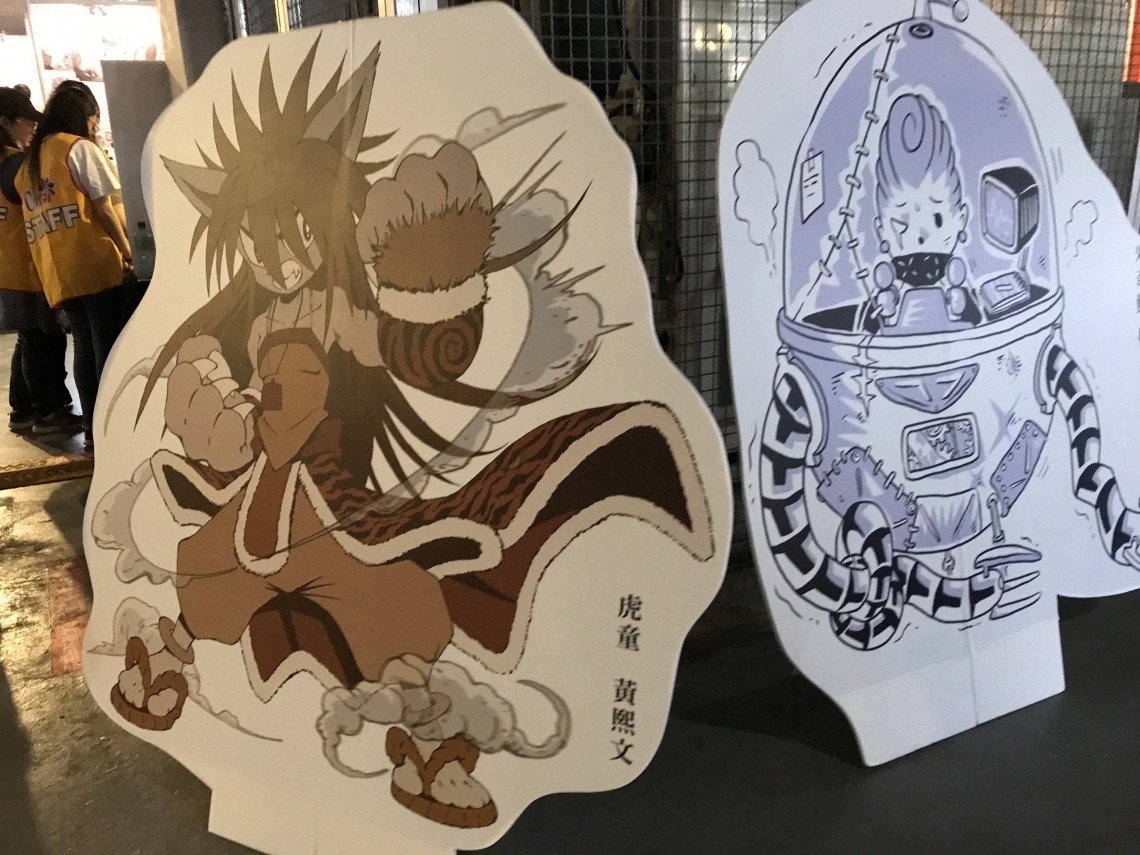 All around the comic book festival, there were these large cutouts of different anime and cartoon characters. 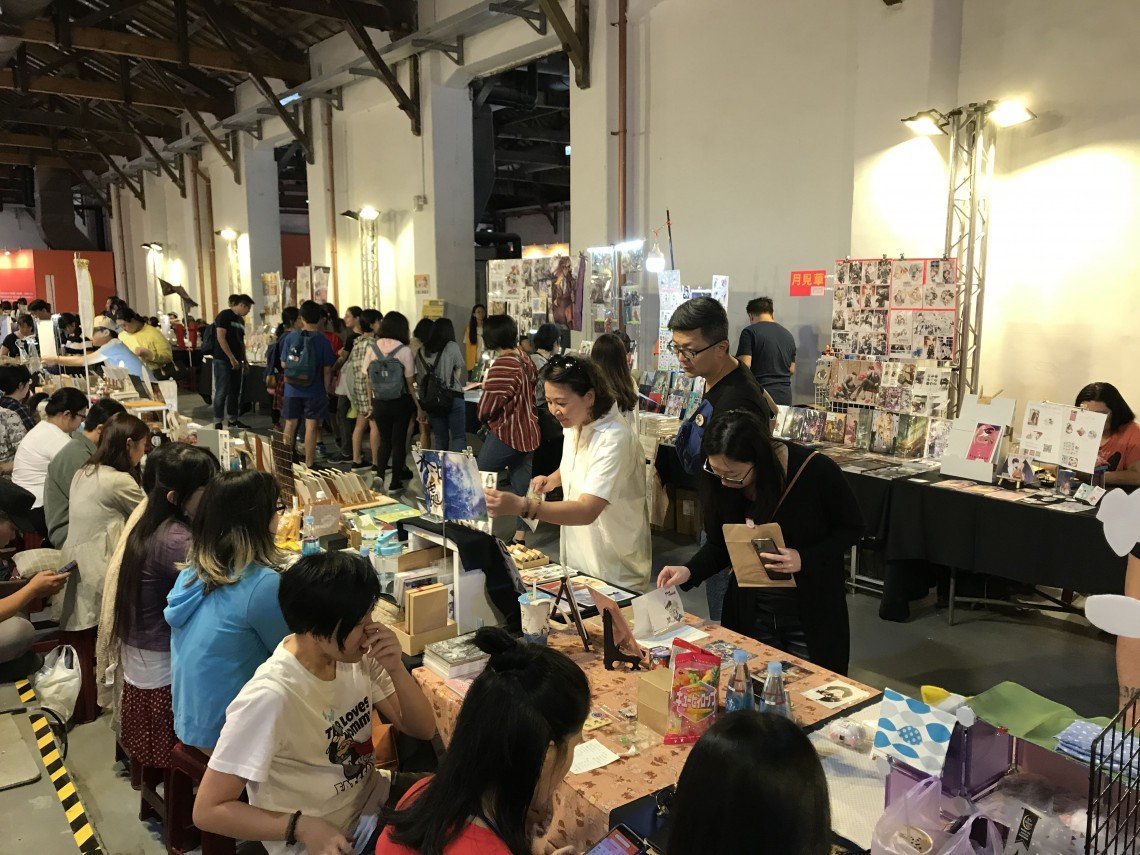 Here is a look at what might be considered the convention floor. Though there were a lot of younger people, I was surprised by the number of older people checking out art. 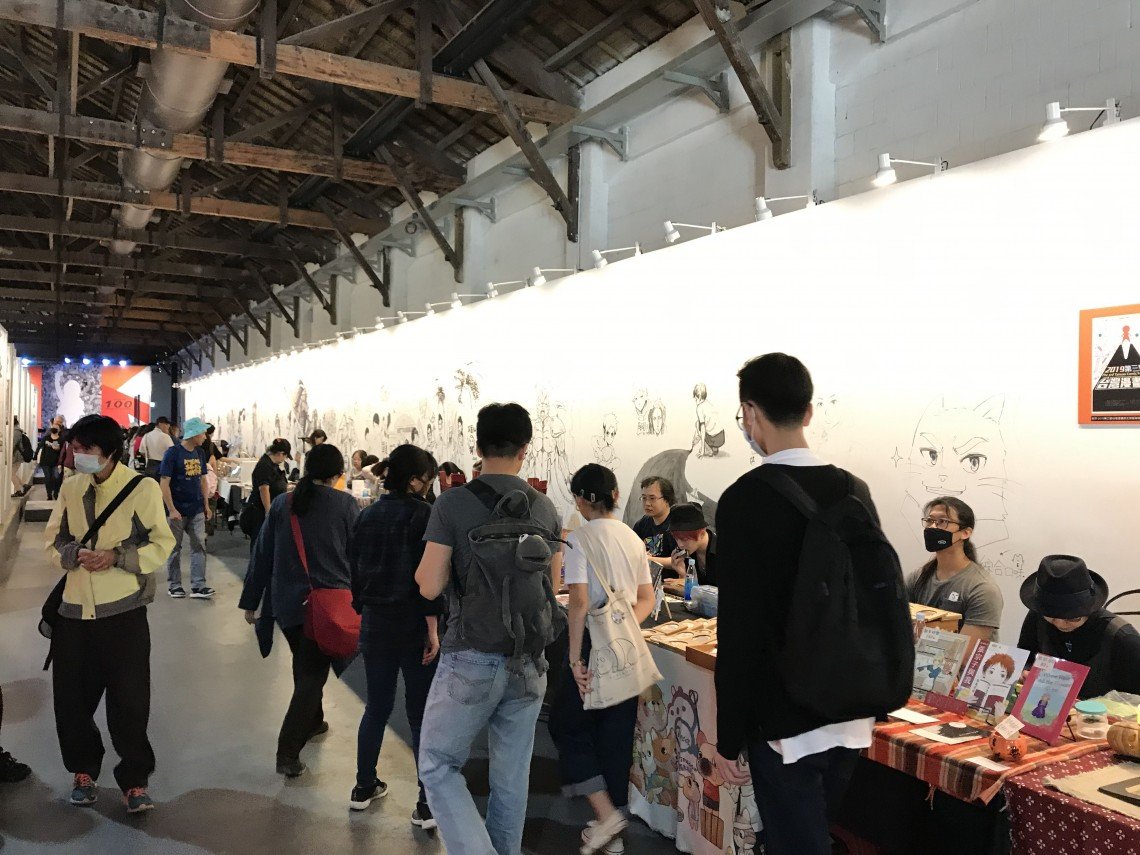 Here’s another part of this huge warehouse. I loved the blank wall in the back that artist tabling used to draw characters on. 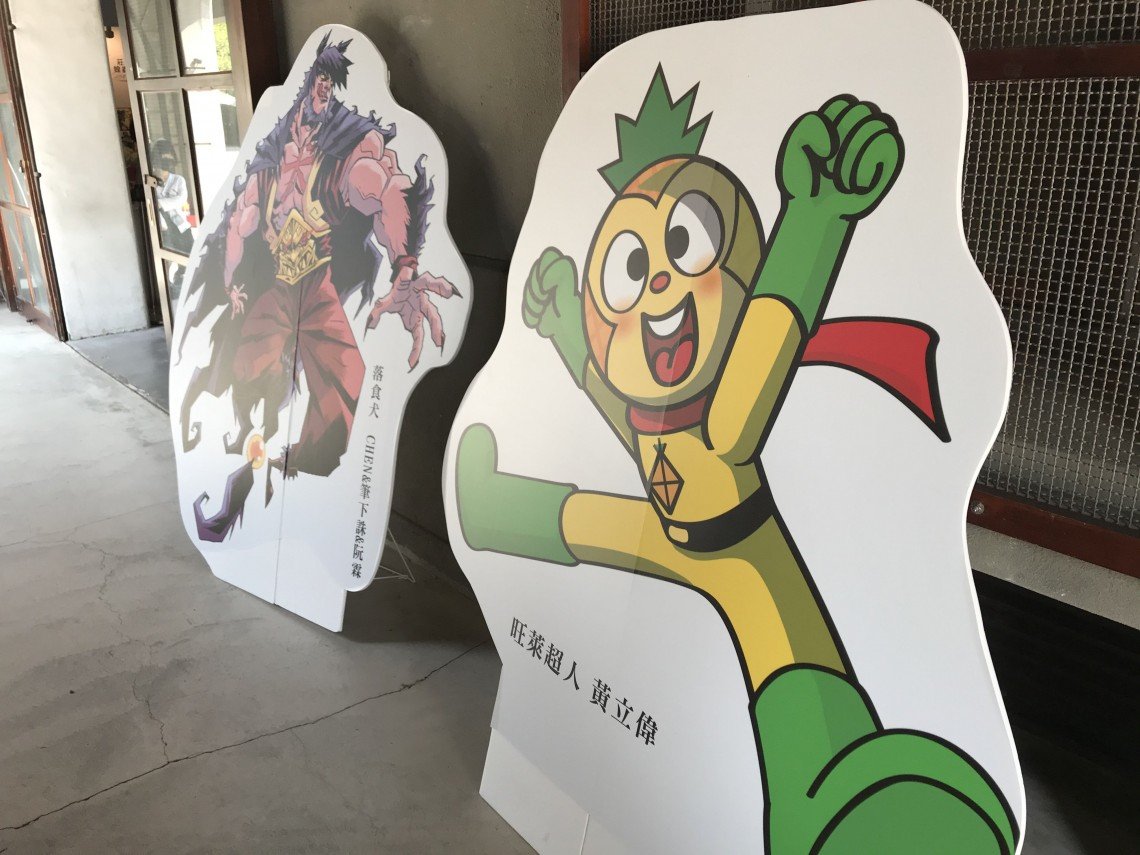 I’m not too familiar with these two characters, but they definitely feel more regional than say a Rick and Morty.

We spent about 20-30 minutes checking out the comic book festival before we headed out. We probably could have spent more time browsing around, but my friends and I were on a time crunch to check out the rest of the park before going to dinner. 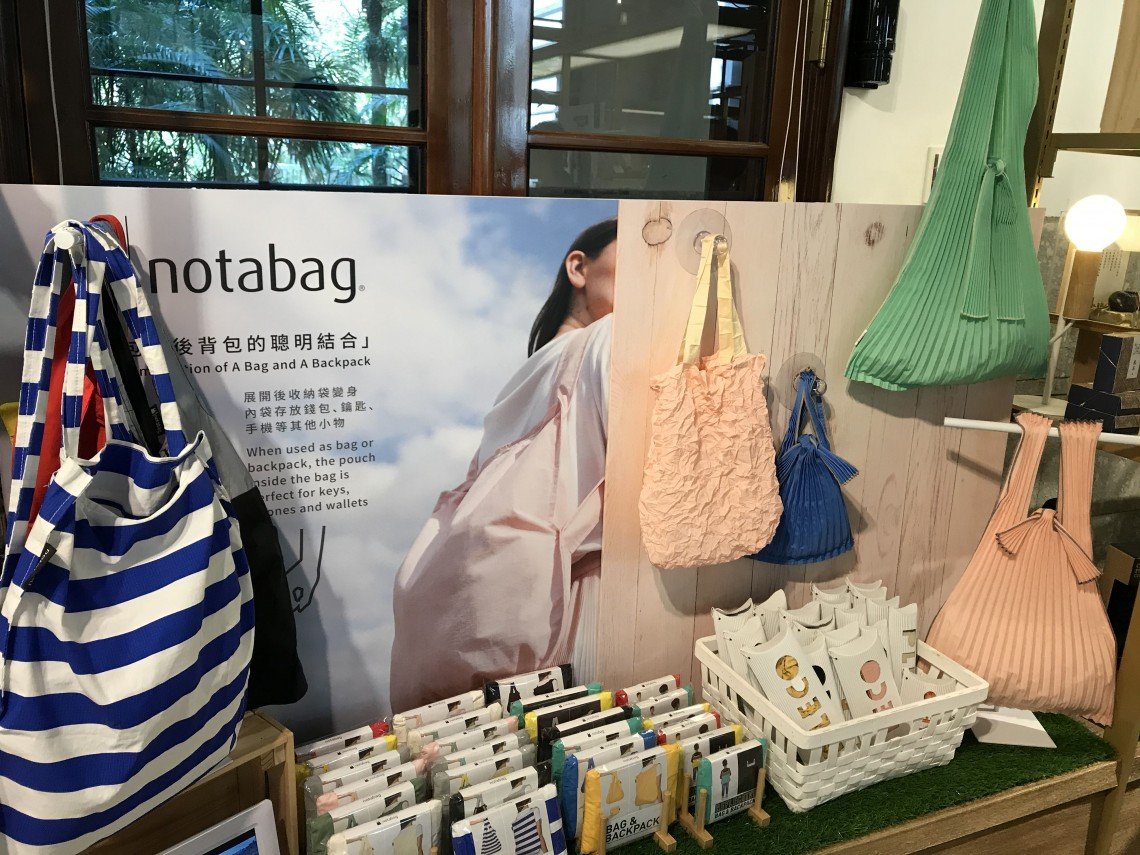 Next stop was Tobacco Factory Building which houses a really awesome design shop. If you’re at all interested in design and in the area, I definitely recommend checking out the store in this building. 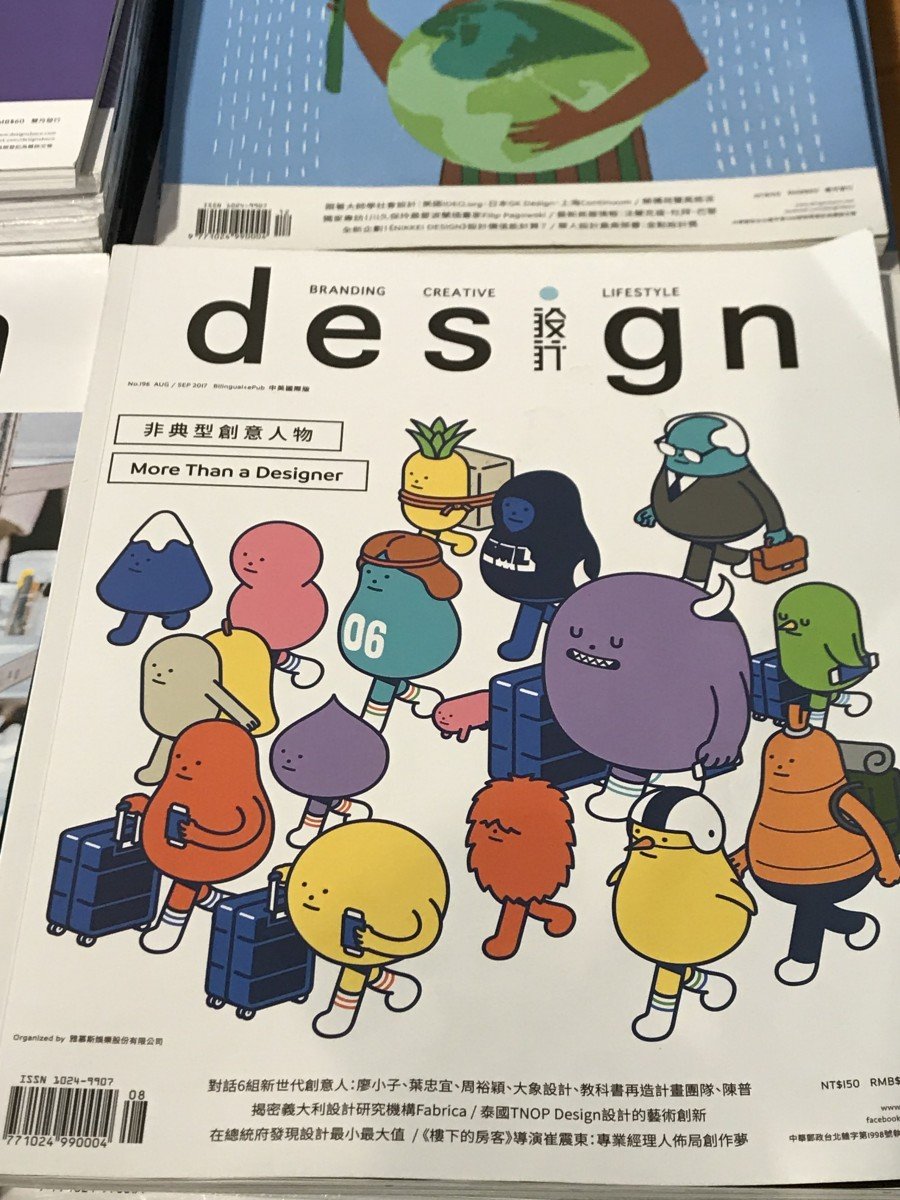 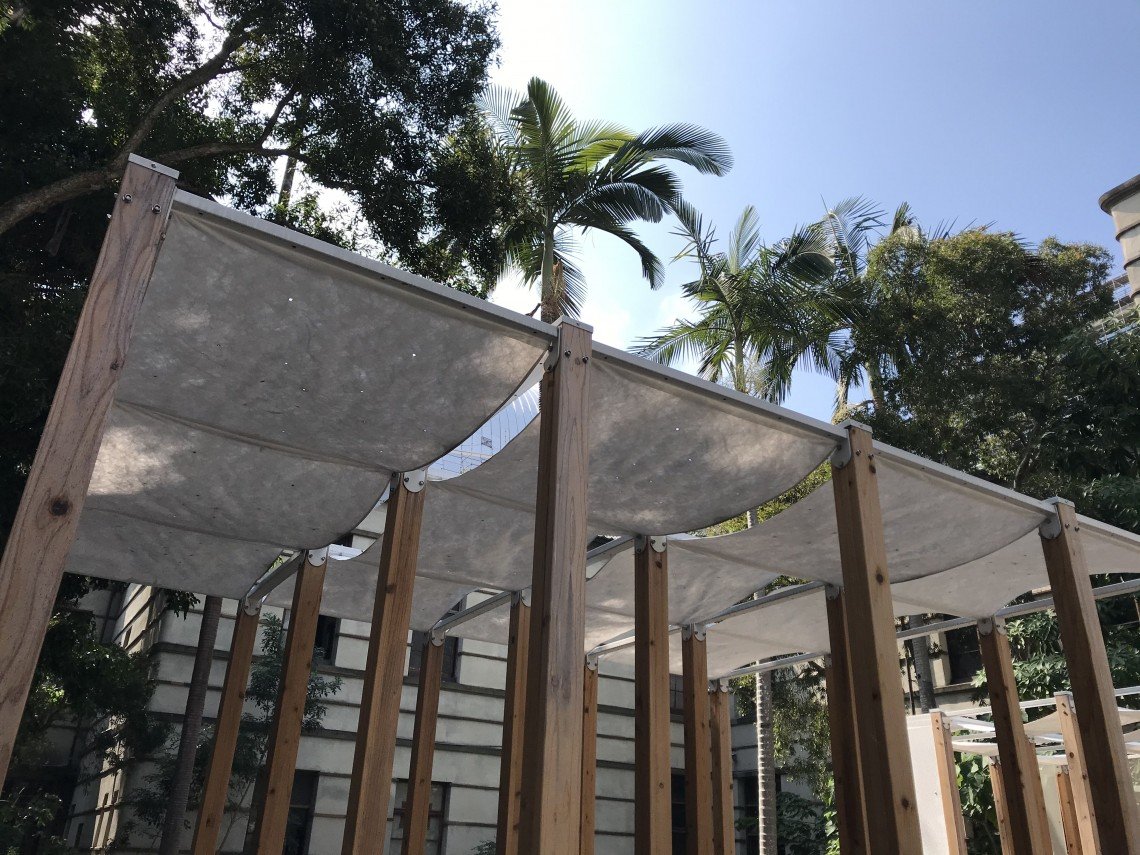 Outside of the Tobacco Factory, closer to the Taiwan Design Museum, we found this unique-looking structure. It was basically a series of raised benches of different levels with a canopy over. We saw a few people relaxing (and maybe even sleeping on them). We sat down for a little bit to plan out what to see next. 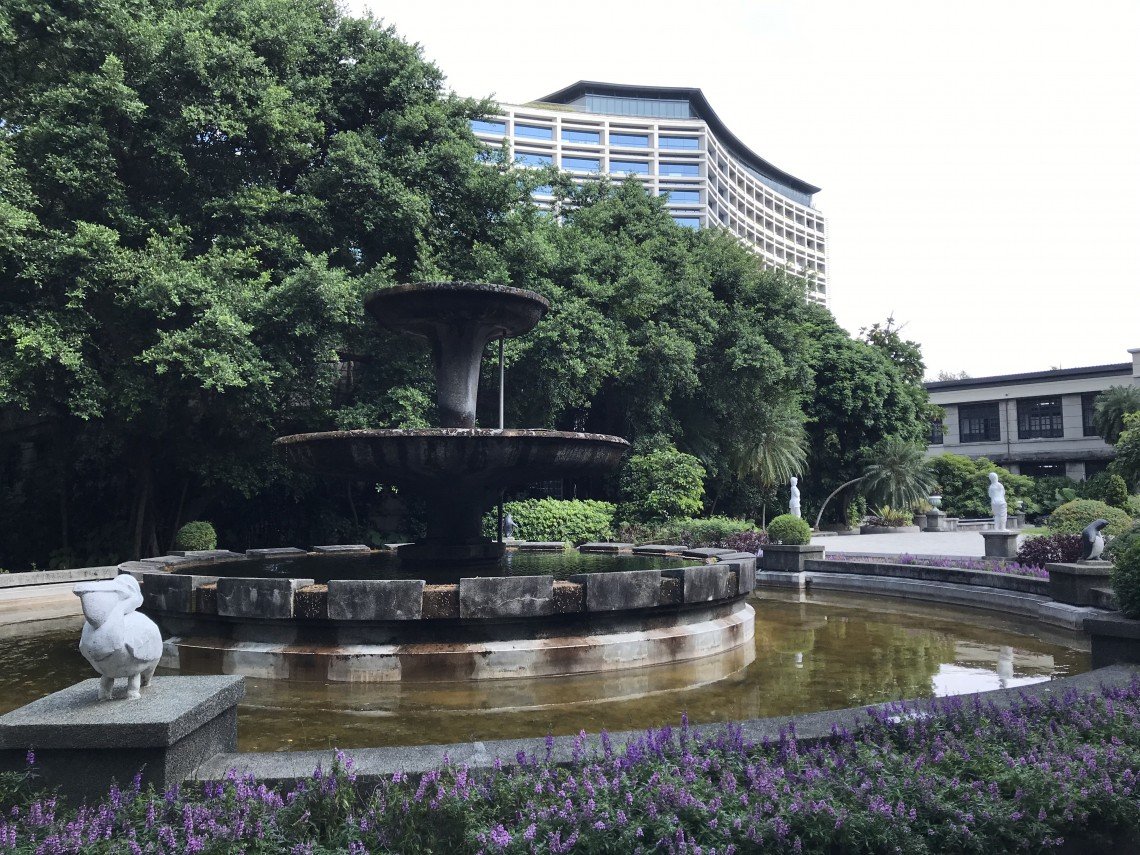 Next up on our short tour was the beautiful garden in the center of the Tobacco Factory building. The fountain was barely on, but the garden was alive with different colors and birds flying around. 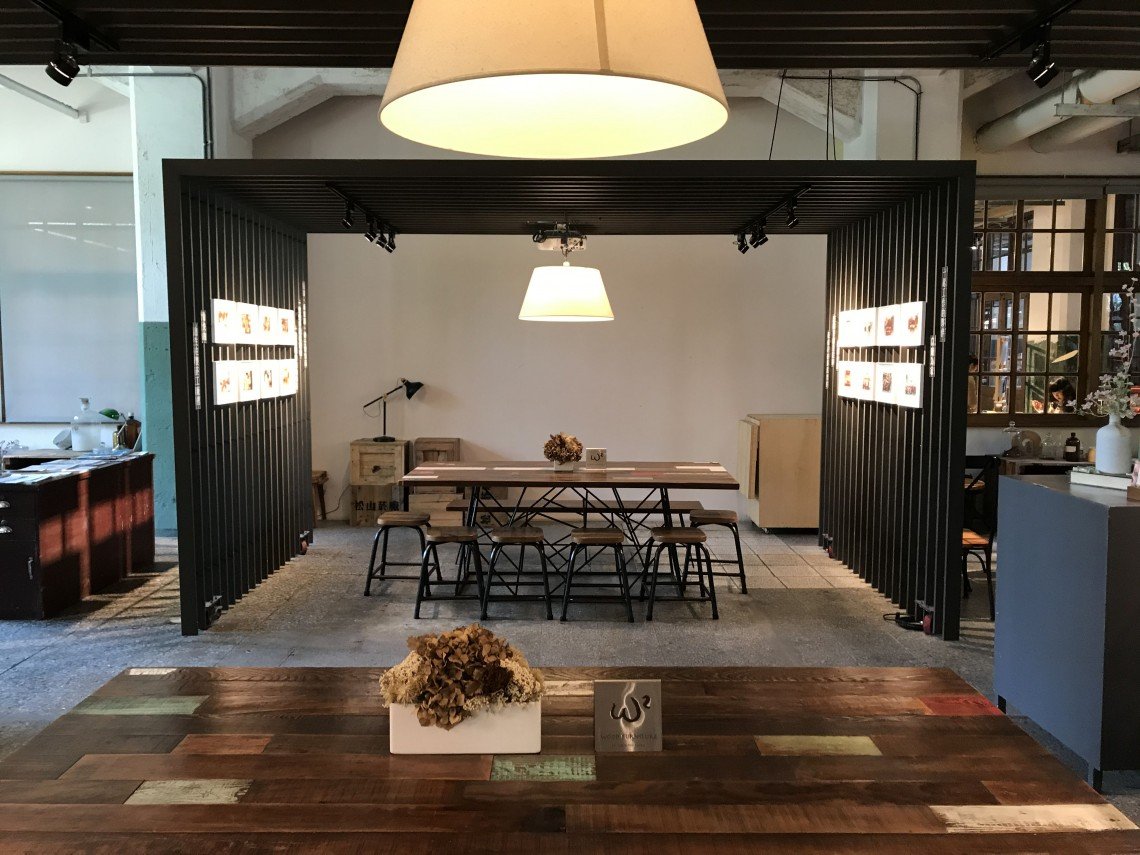 We browsed the nearby cafe before we realized just how little time we had to get to dinner.

If you plan on checking out Songshan Cultural Creative Park, definitely, add a little more time to your schedule. More than likely, you’ll find something cool that piques your curiosity. Worst case, you can always just walk past the pond and make your way to the National Dr. Sun Yat-Sen Memorial Hall which is just a short 10 minute walk away.

As for the comic-con aspect of this post, this festival wasn’t the best that I’ve ever been to, but I also wouldn’t put it alongside behemoths like Anime Expo or San Diego Comic-Con. This convention was definitely on the smaller side, they even frame it as a “festival.” That said, seeing that there is a small convention culture made me excited to possibly check out a larger convention in the future. Until then, I’ll take satisfaction in knowing that people are being creative and producing amazing art, whether it be through cartoons or cosplay.