Walking Through History in Downtown Philadelphia

Growing up, I remember learning about the historical significance of Philadelphia and its place in history. As a central physical location in the original thirteen colonies, it became a hub of commerce and a natural meeting point during talks of revolution. Philadelphia was the location of the First Continental Congress and, later, signing of the United States Declaration of Independence.

It was a joy, consequently, to visit the City of Brotherly Love and to retrace history one step at a time.

Our hotel was located near the Old City and Chinatown neighborhood. This area is a hodgepodge of historical sites, old brick shops, and Asian eateries.

It wasn’t long before plaques started appearing on walls and in the middle of sidewalks. 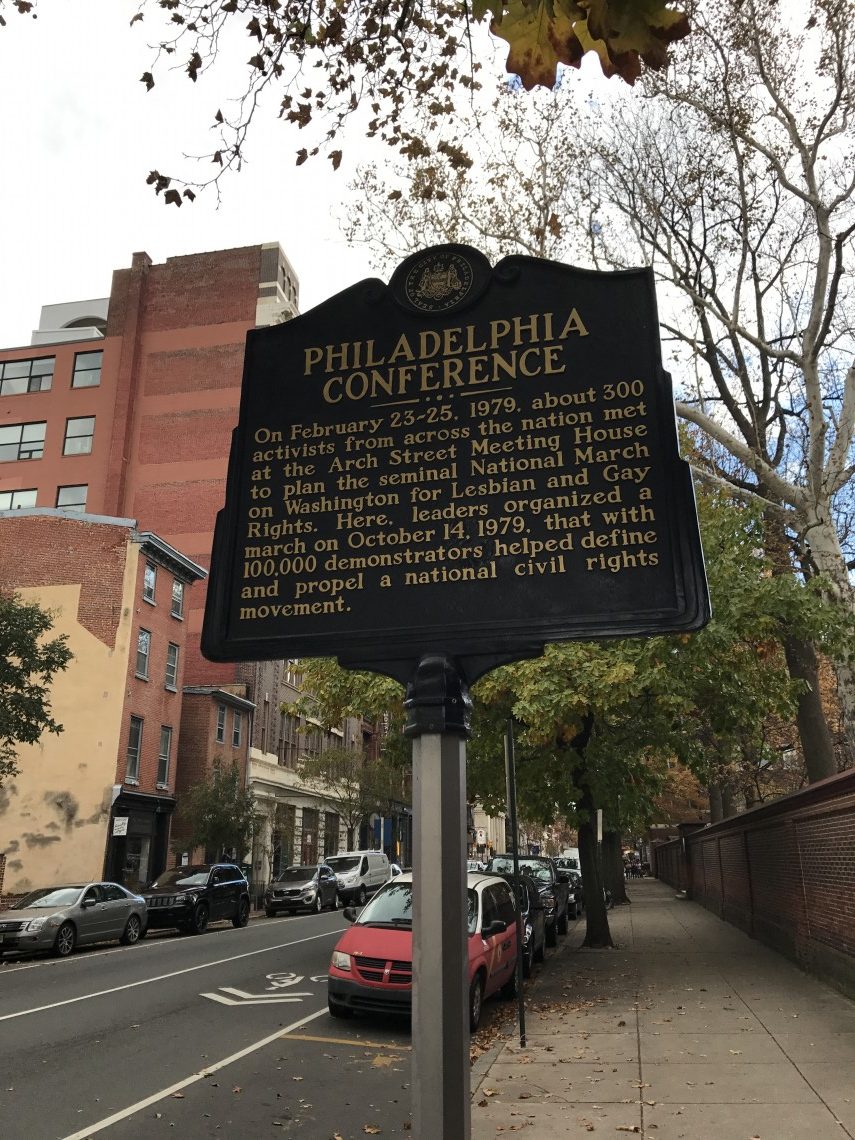 At almost every block, I felt like there was a new plaque to read.

One of the first stops we intentionally made on our historical walkthrough of the city was the Betsy Ross House. 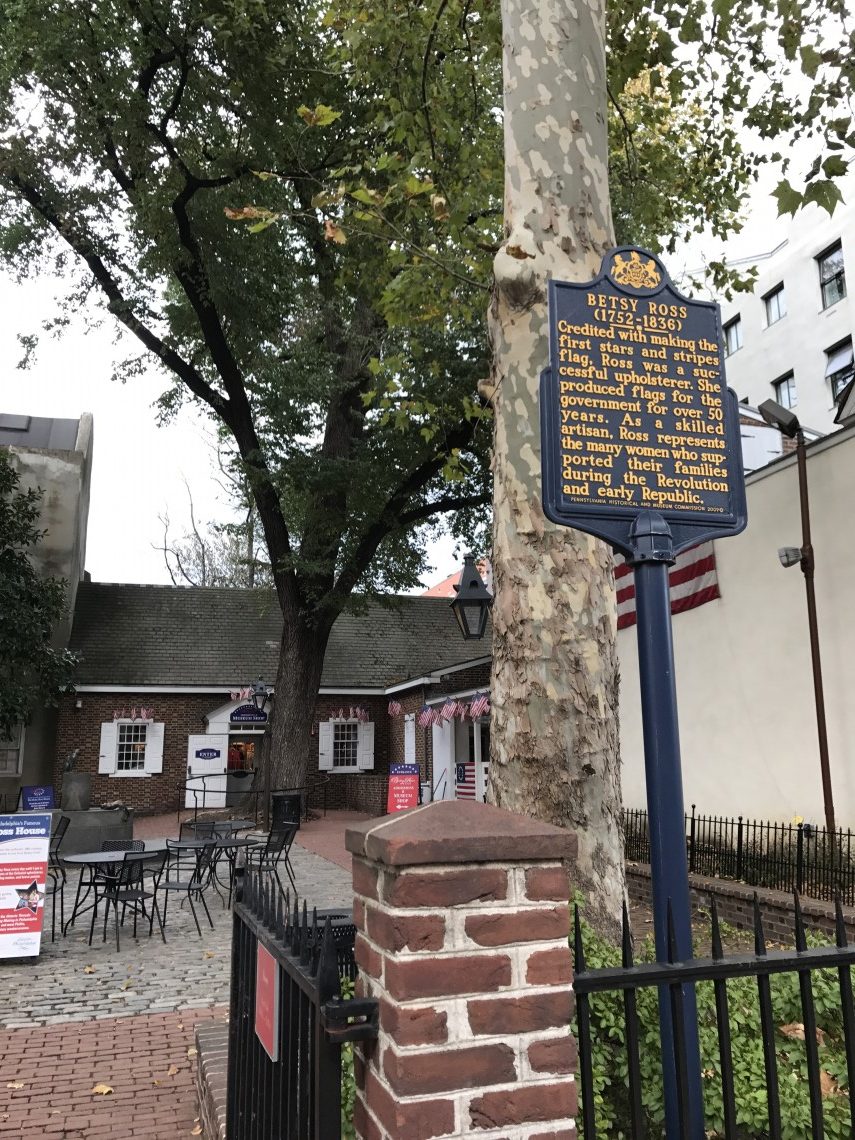 Betsy Ross was one of the women who stand out in the American Revolution. Though her story is often questioned now by those who study flags, it was fun being able to check out the house of someone who may have had a part in the literal fabric of the United States. 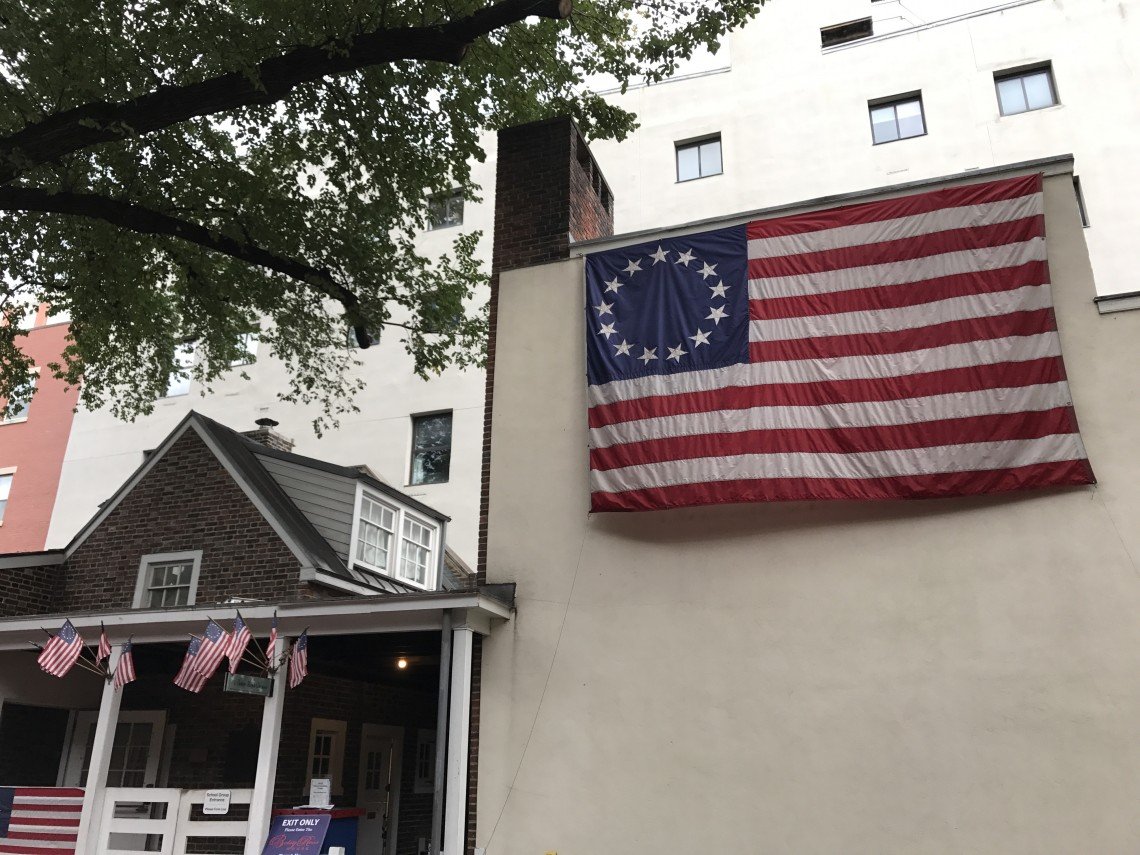 Walking to the main street, I was enamored by the local architecture. For the most part, buildings are made of brick. Historical buildings are often one-story sandwiched in between three, four, and five story buildings. Most of the buildings are pretty narrow from the street-view but extend pretty far back. 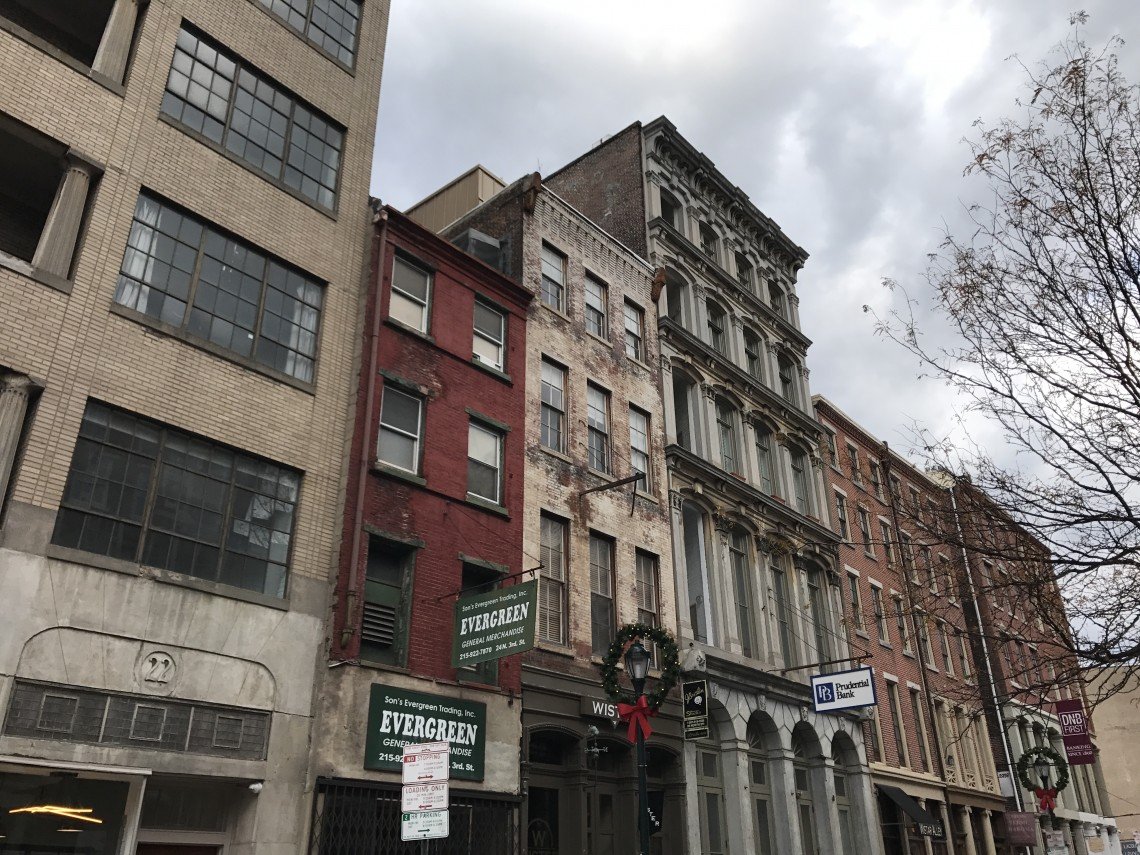 Almost every building that I passed by had a mark of age which added to the appeal. Except for more modern-looking museums, this part of Philadelphia manages to maintain its old school charm.

Soon enough, we were walking down Market Street passing by the Benjamin Franklin Museum and through Independence National Historical Park—our destination Independence Hall.

To go on our guided tour of Independence Hall, we first needed to drop by Independence Visitor Center to pick up tickets.

Tickets are timed entry and free to pick up on the day of your visit. Tickets can be reserved with a small handling fee.

Because tours begin every 30 minutes, we didn’t have to wait too long before our tour would begin. There was enough to see at the visitor center and the weather was nice enough in Philadelphia that we easily were able to pass the time.

When it was our time to enter, we passed through security and waited a few minutes for the rest of our group to arrive. Soon enough, we were inside Independence Hall. 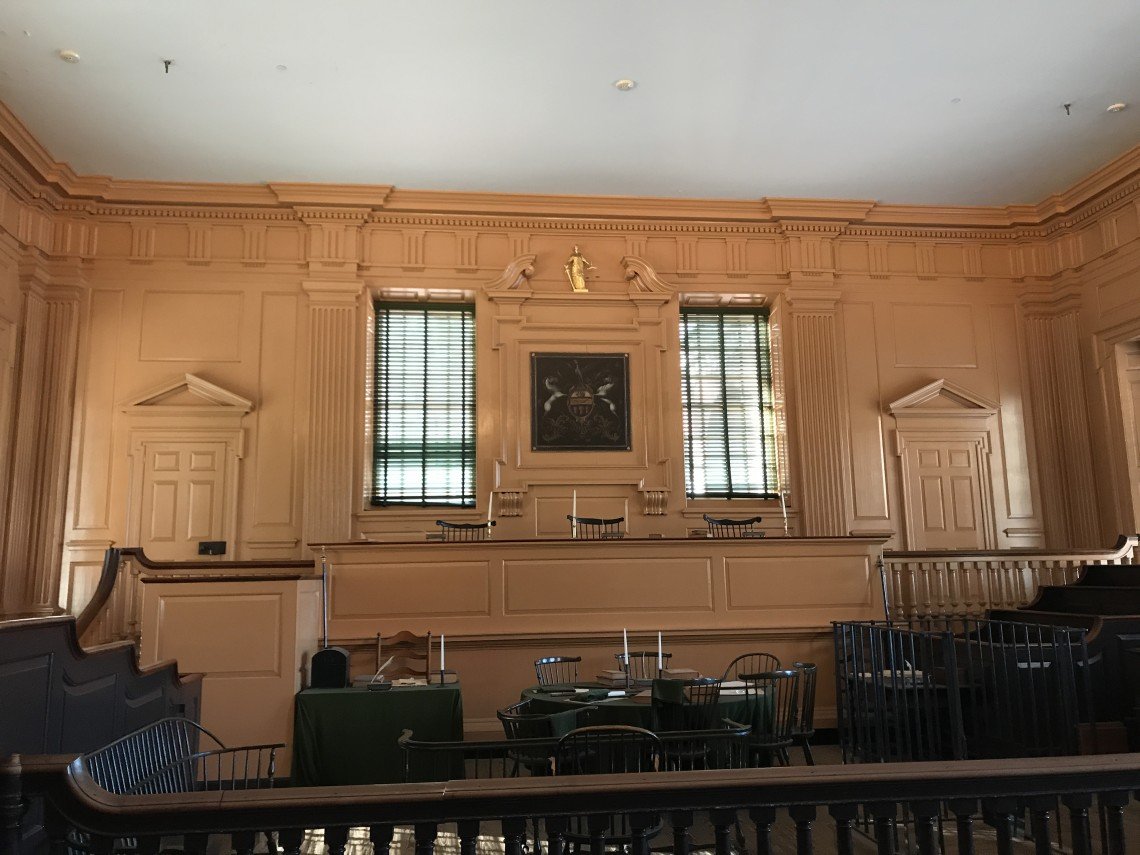 One of the first rooms we saw was the Courtroom of the Pennsylvania Supreme Court. We were told about the history of the room and how King George III’s coat of arms was torn down in an act of defiance. 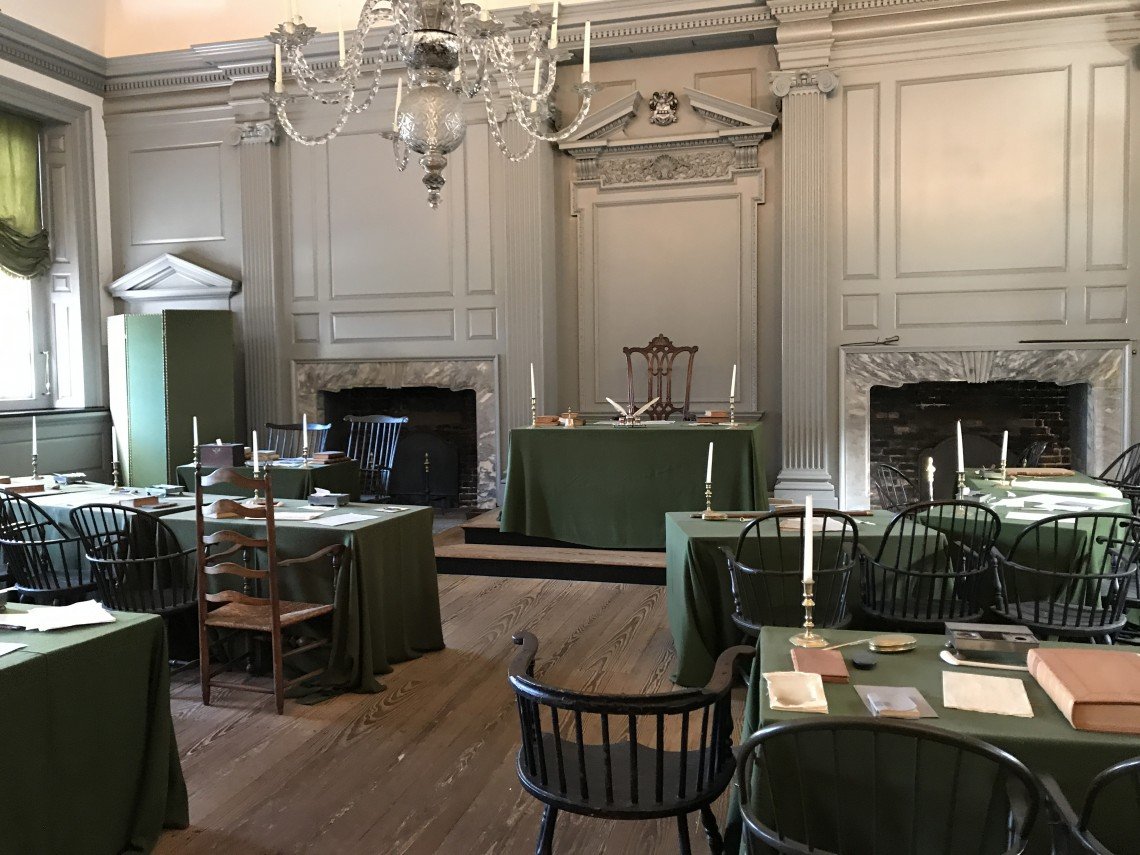 The highlight was the Assembly Room where the Declaration of Independence and Constitution were signed. 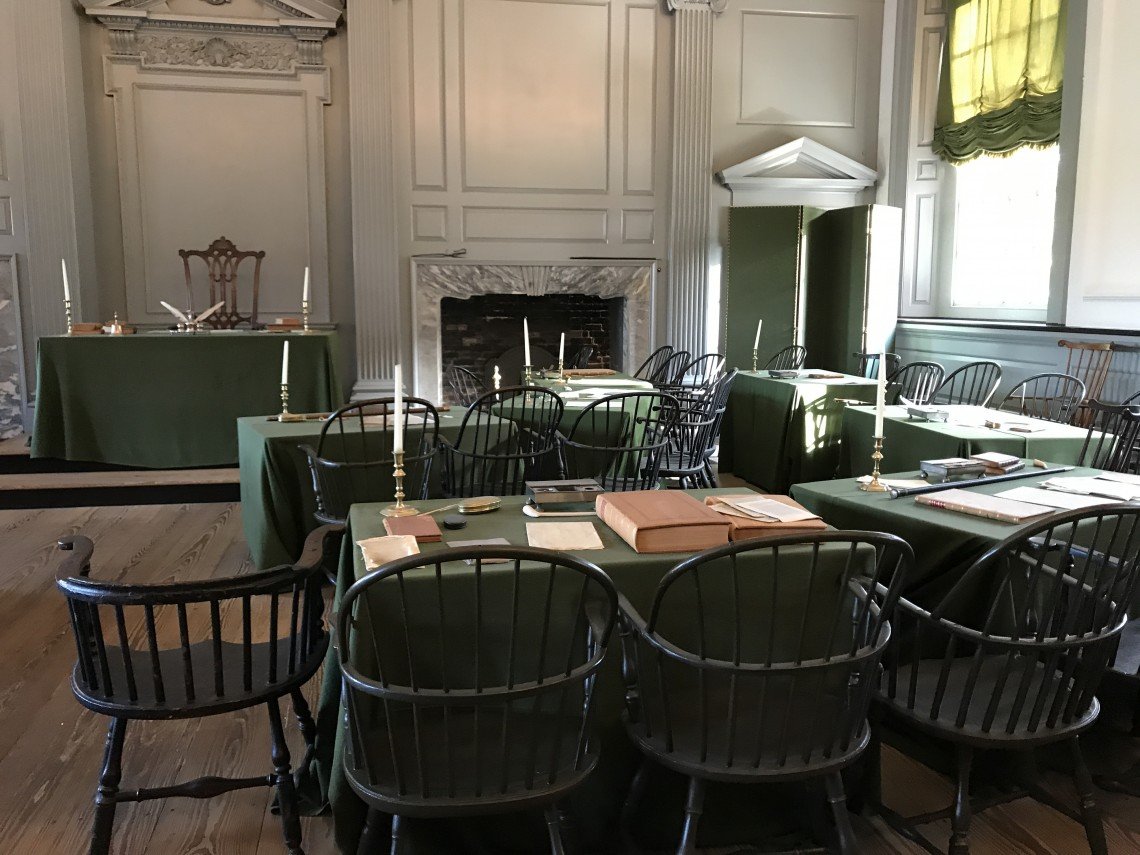 You can almost imagine delegates huddling near one another debating the issue of succession while George Washington sits at the helm. 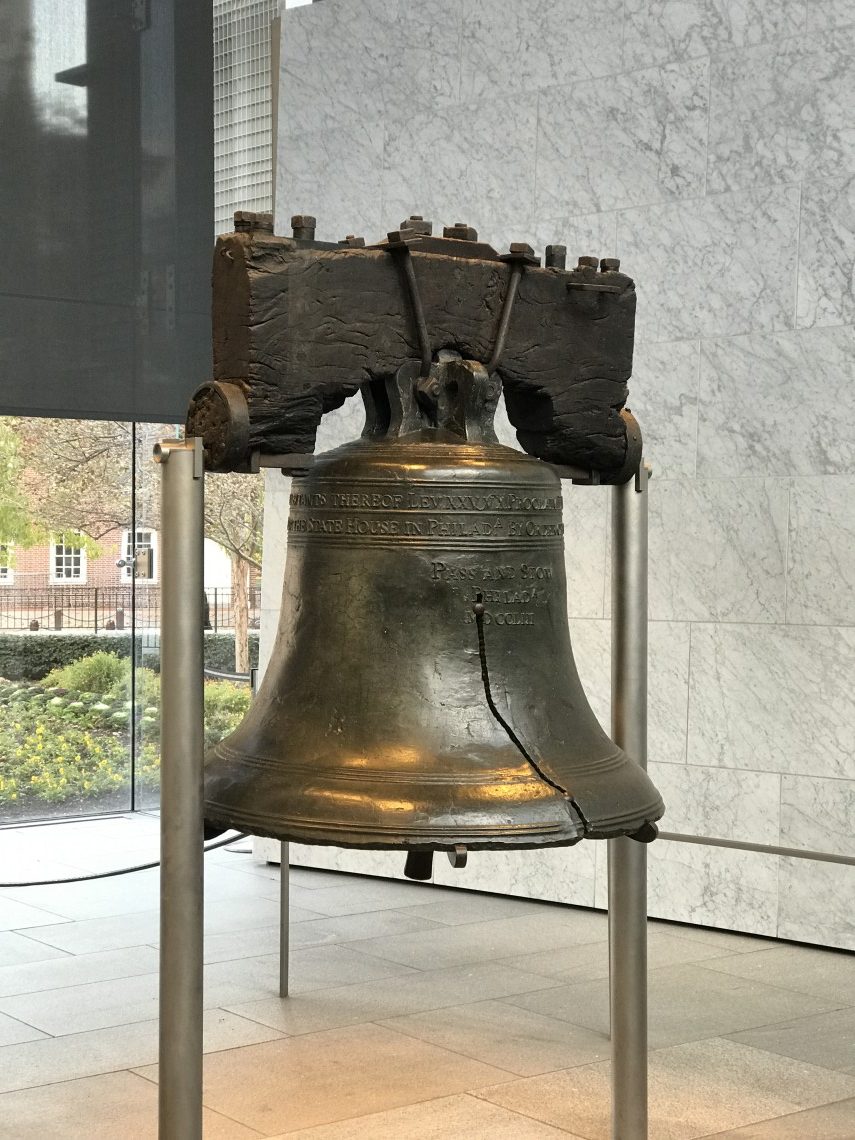 After walking through Independence Hall, we took a short stroll back over to the park to check out the Liberty Bell.

The Liberty Bell has an odd but fascinating history as an emblem of freedom.

The original bell rang in the tower of the Pennsylvania State House, also known as Independence Hall. At first ring, the bell cracked. This bell was melted down and recast to function as an audible signal that lawmakers and townspeople should convene.

This bell, over time, began to crack again. The final crack occurred when it was ordered to be rung during George Washington’s birthday in 1846. In an effort to fix a small fissure, the crack was widened. This eventually resulted in the repair becoming unsuccessful.

The bell now stands as a symbol of liberty to all those who witness it.

By now, it was late afternoon. 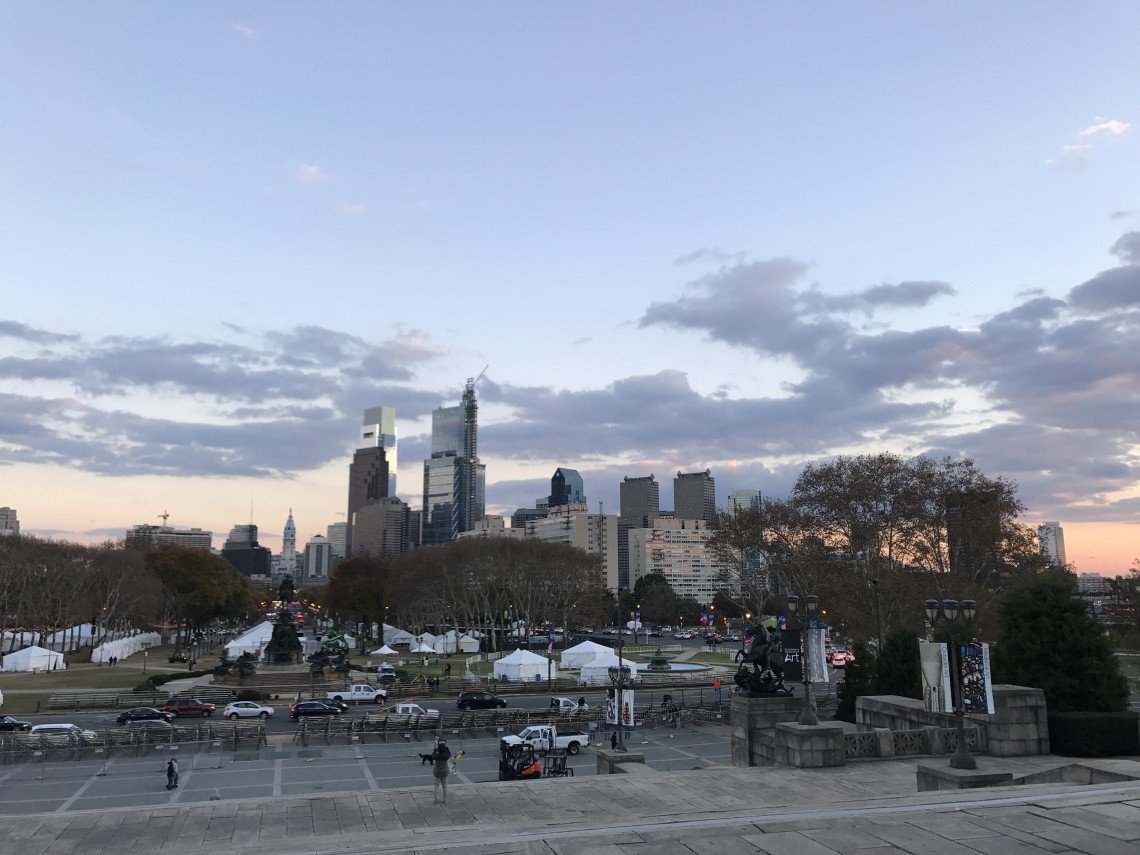 Wanting to catch a few more sights, we took a Lyft to the Philadelphia Museum of Art where I was stunned by the view. Because of the way the city is built, City Hall stands at prominence down at the opposite end of the museum. It was beautiful looking at downtown with the sun slowly setting. 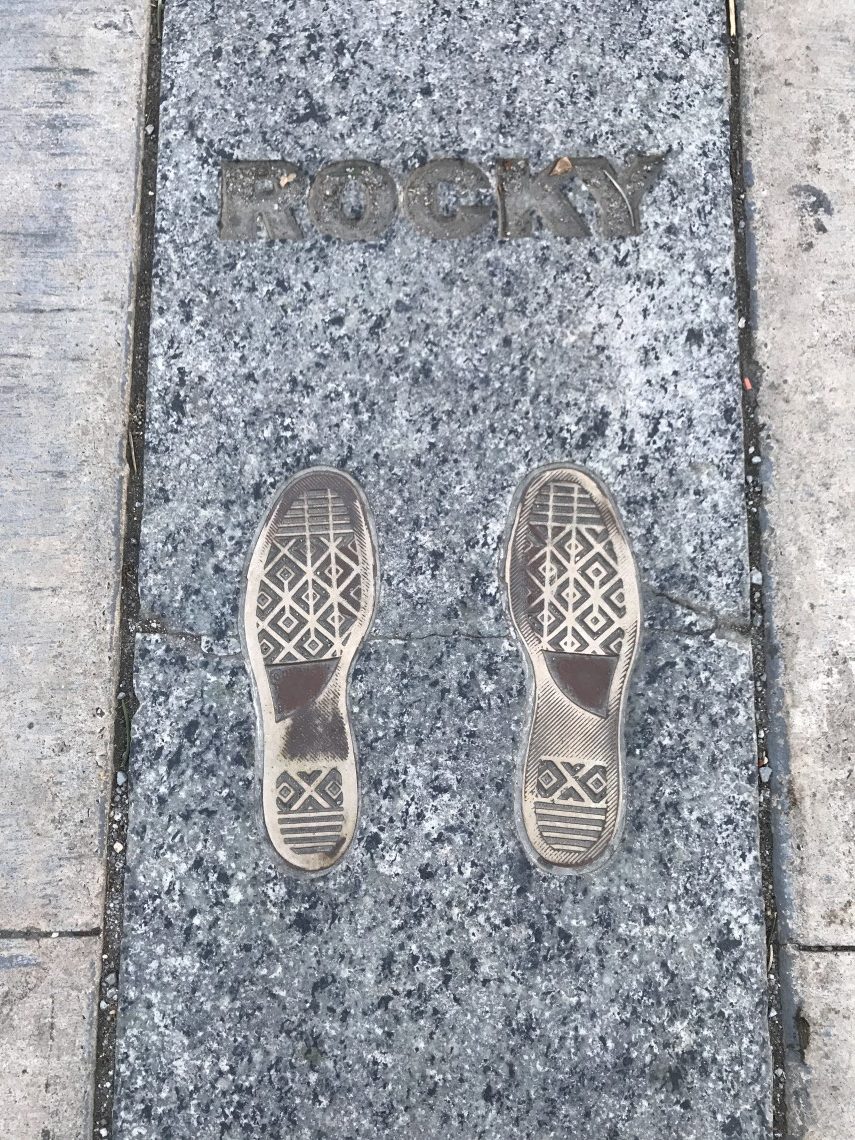 Though I never watched Rocky, we stopped by Rocky steps to find a few others doing their best Rocky impression for the gram. 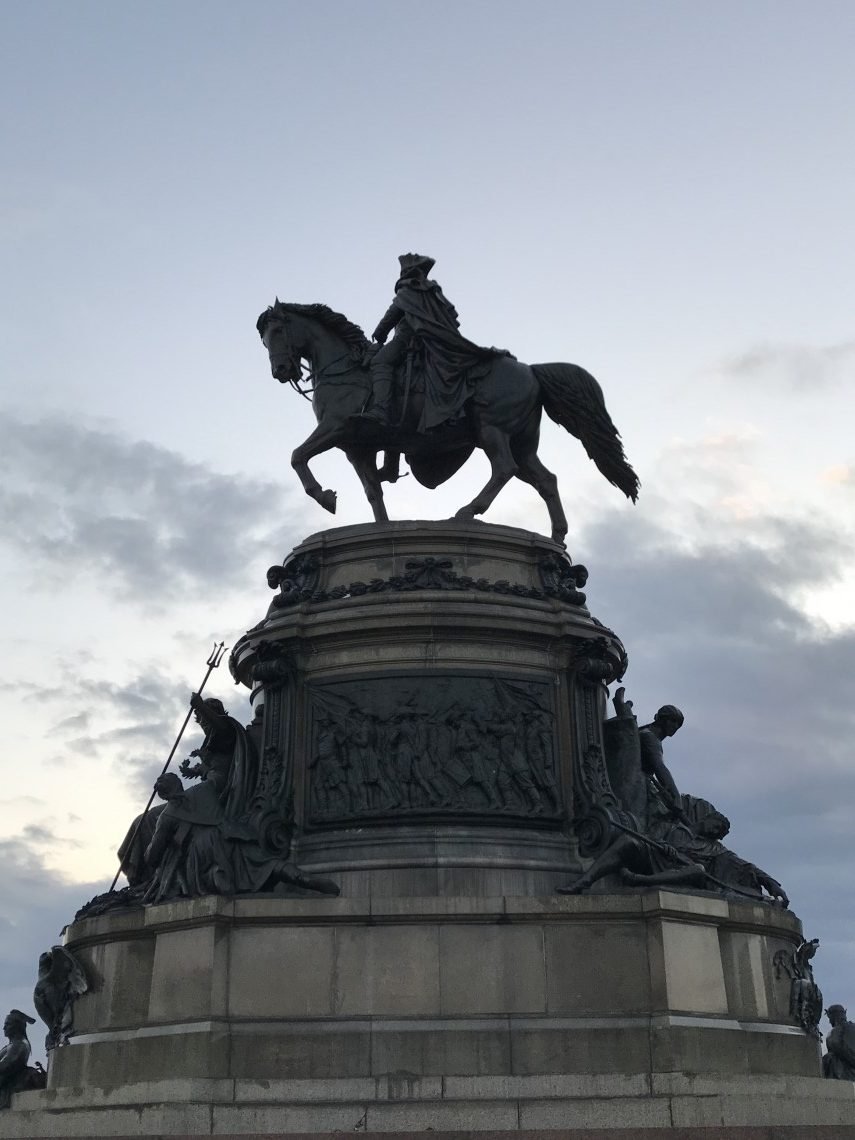 We walked by George Washington as we headed back into downtown. It was a nice way to round out the day, taking in all the history around. 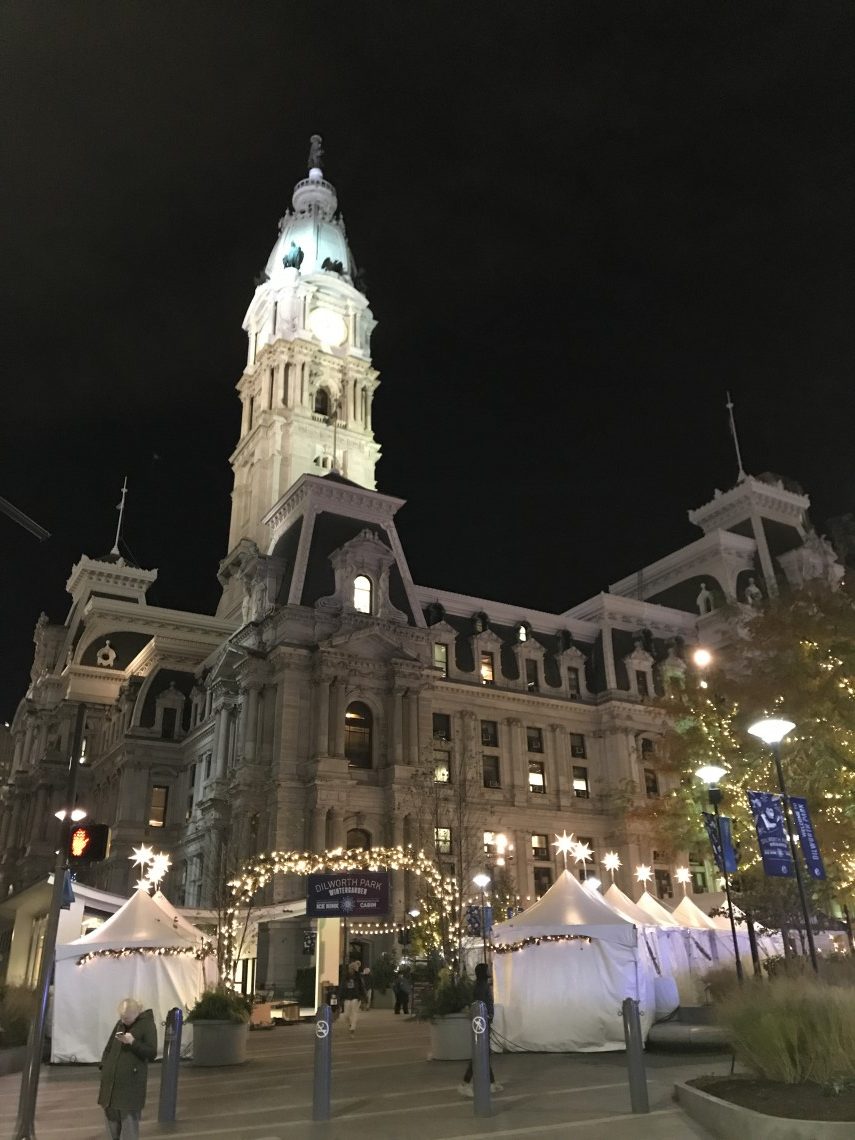 Though it was pretty chilly along Benjamin Franklin Parkway, we eventually made it to City Hall where the city was hosting a holiday event in Dilworth Park. 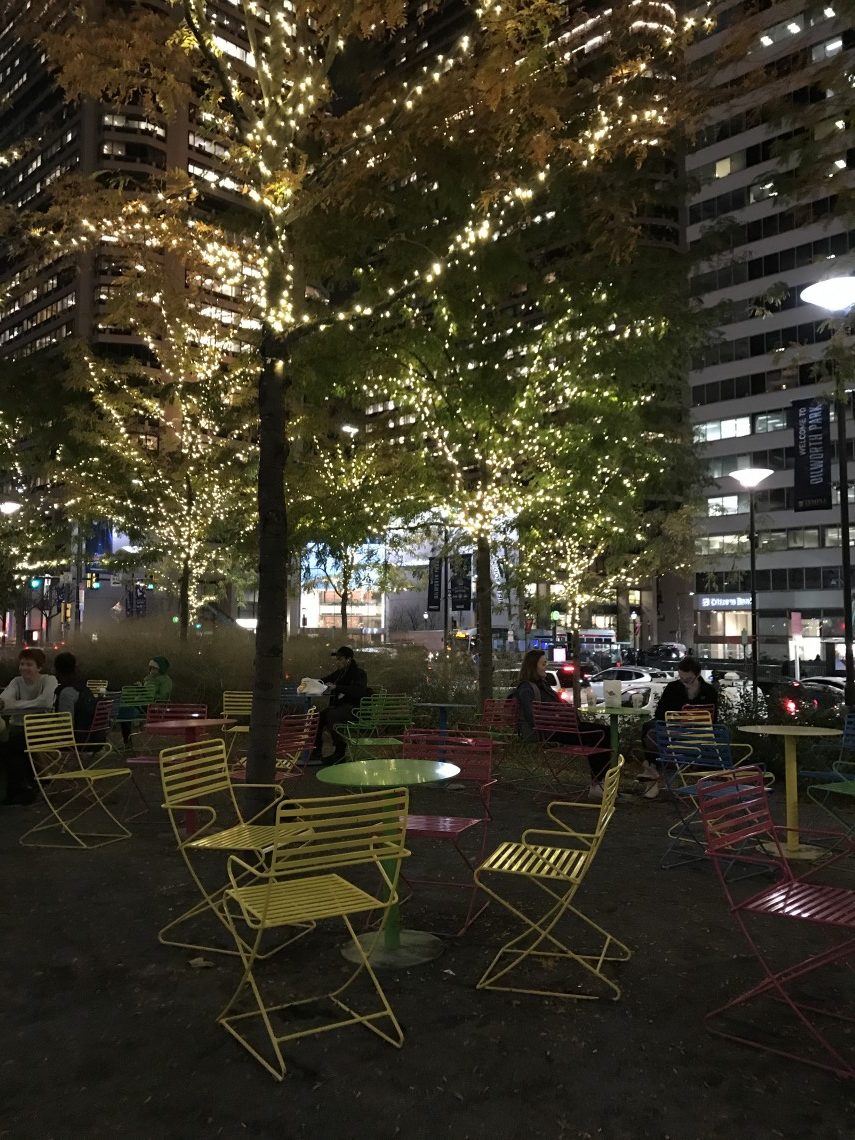 With the twinkling of holiday lights around and seats everywhere, we finally had a change to sit down and relax. I sat in calm reflection as I thought about all that may have happened around me leading up to this point. It was a nice way to round of the day walking through a city immersed in history.