A Walk Down Painted Animation Lane

Readers of Collecting EXP will know that I share a fondness for street art. From murals encompassing large warehouses to small stickers tacked onto light poles, I feel like you can get a good feel of a community from art found on the street. Though street art can be hard to come by in Taiwan, when you find it, it’s often very impressive and uniquely Taiwanese.

Much of the art I’ve found has been in and around cultural creative parks, but there are hidden gems scattered elsewhere including Rainbow Village.

One of the places that I was able to check off my list is an area in the West District of Taichung (台中西區 / tai zhong xi ou) known as Painted Animation Lane (動漫彩繪巷 / dong man cai hui xiang). Painted Animation Lane is a small few blocks worth of walls adorned with popular anime and cartoon characters on them, ranging from Mr. Bean to One Piece.

Here are some of the many murals I saw: 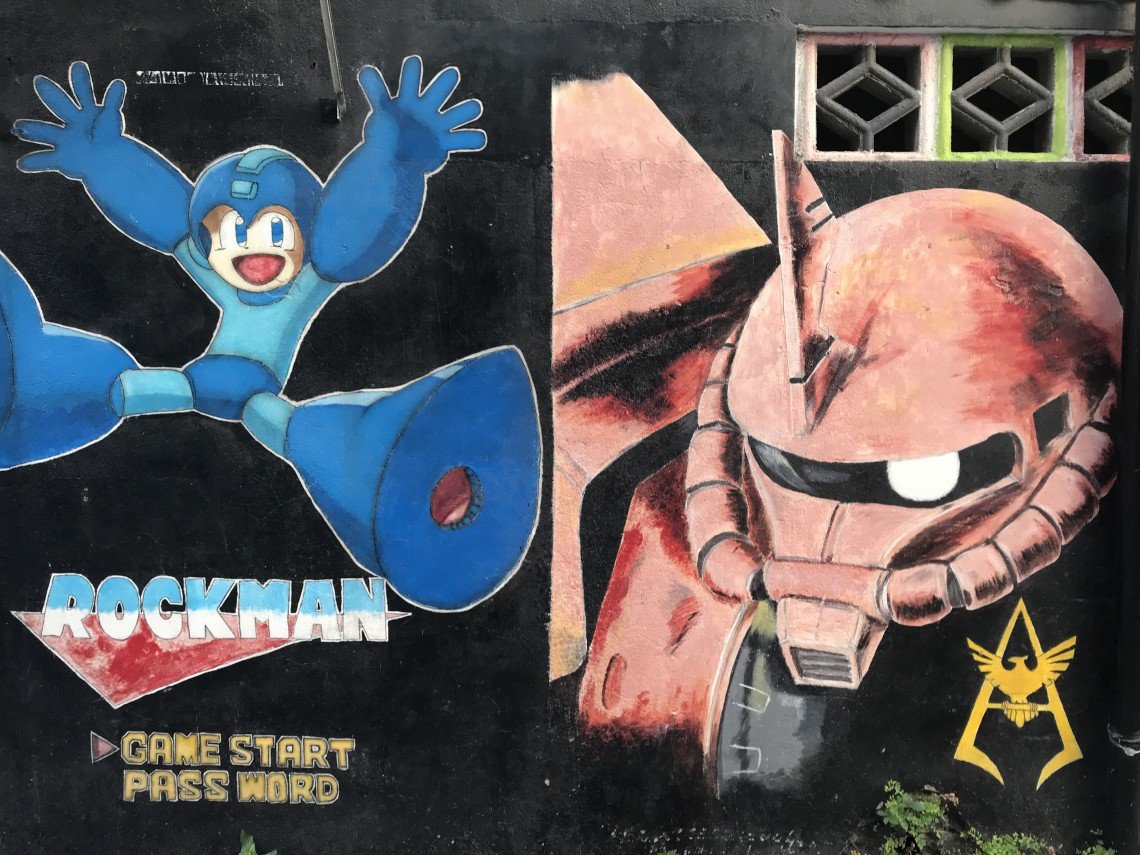 Growing up in the US, I never knew about Mega Man but not so much Rockman. Turns out Rockman is the Japanese name for the boy robot.

This red Zaku II is so cool! I remember having so much fun assembling Gundam figurines when I was little. 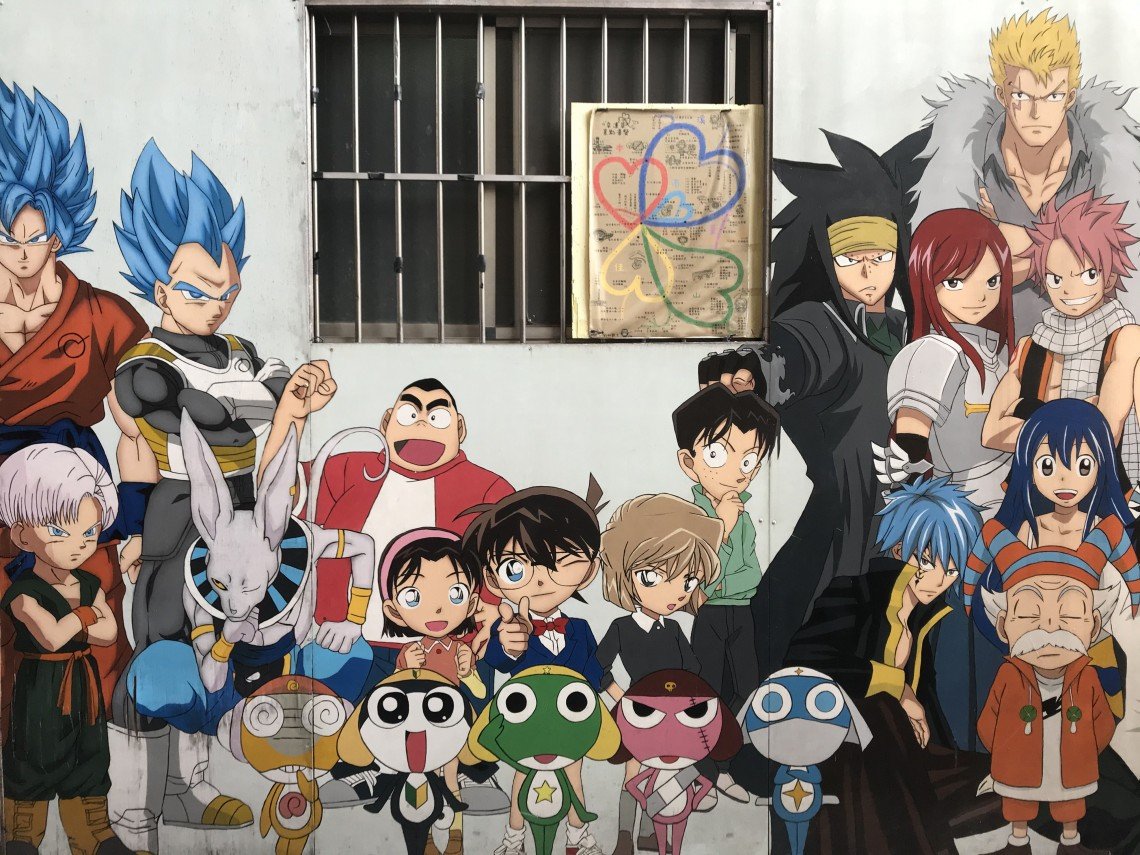 How many of the characters can you name in the photo above?

I was a bit surprised to find Angry Birds, but I suppose they are animated characters. Know of anyone still playing these games? 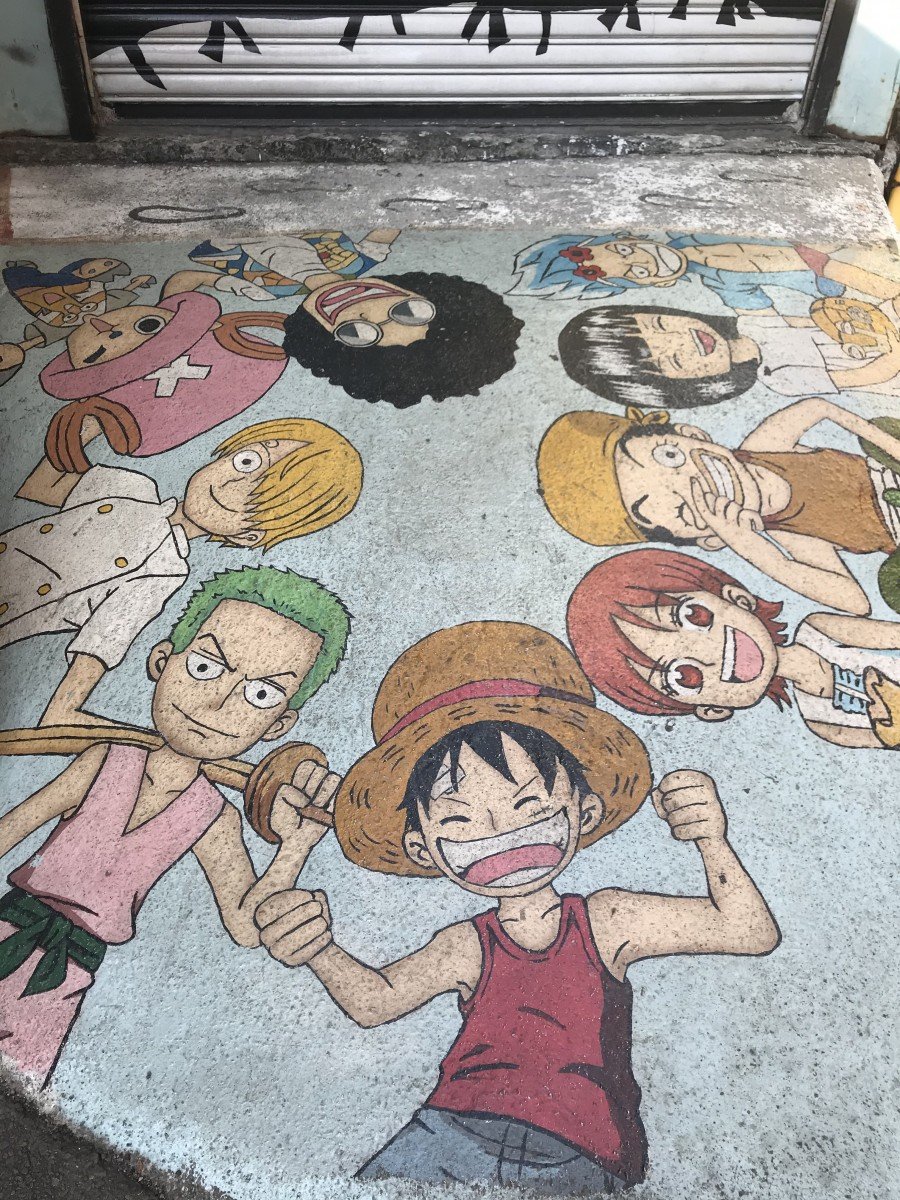 The murals are on walls, warehouse doors, and even the floor. 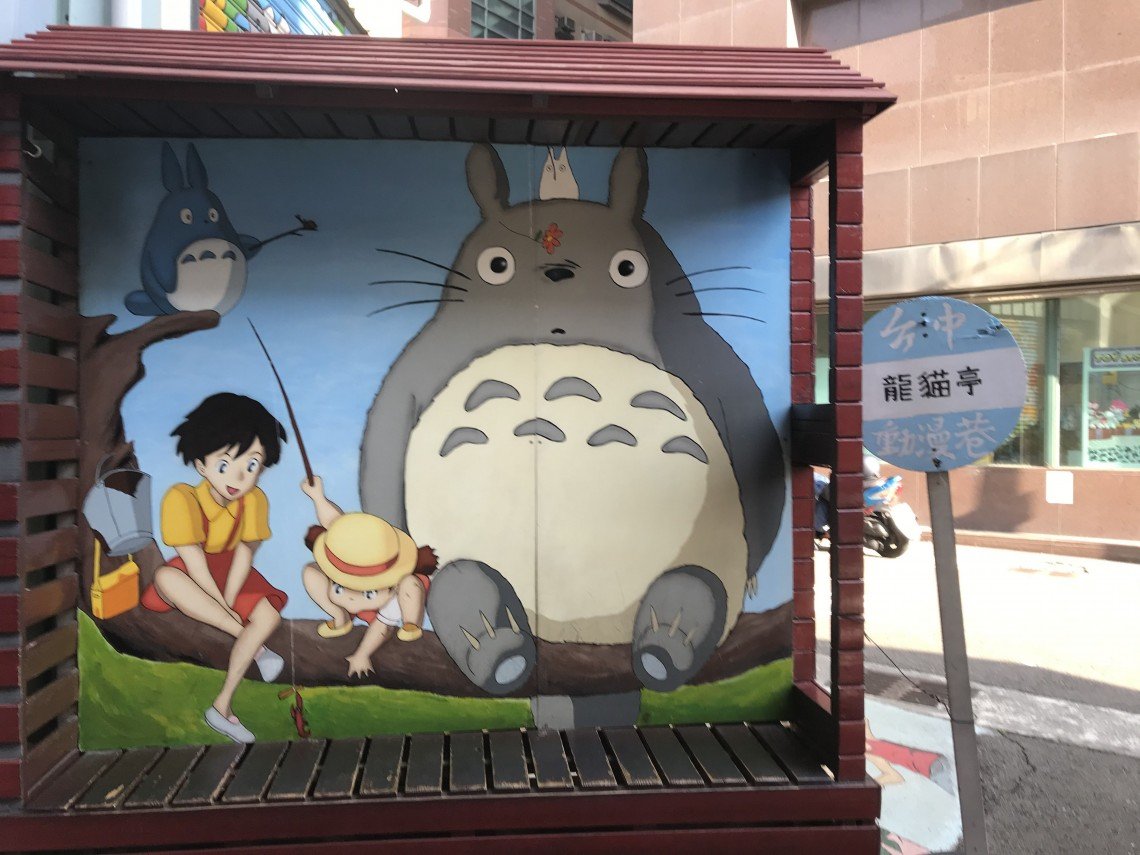 Wasn’t able to get a good snapshot of this, but here is an interactive art piece of a Totoro bus stop with a bench. Behind it Totoro sits next to the Kusakabe sisters from My Neighbor Totoro.

Pirates, so many pirates around this alley. 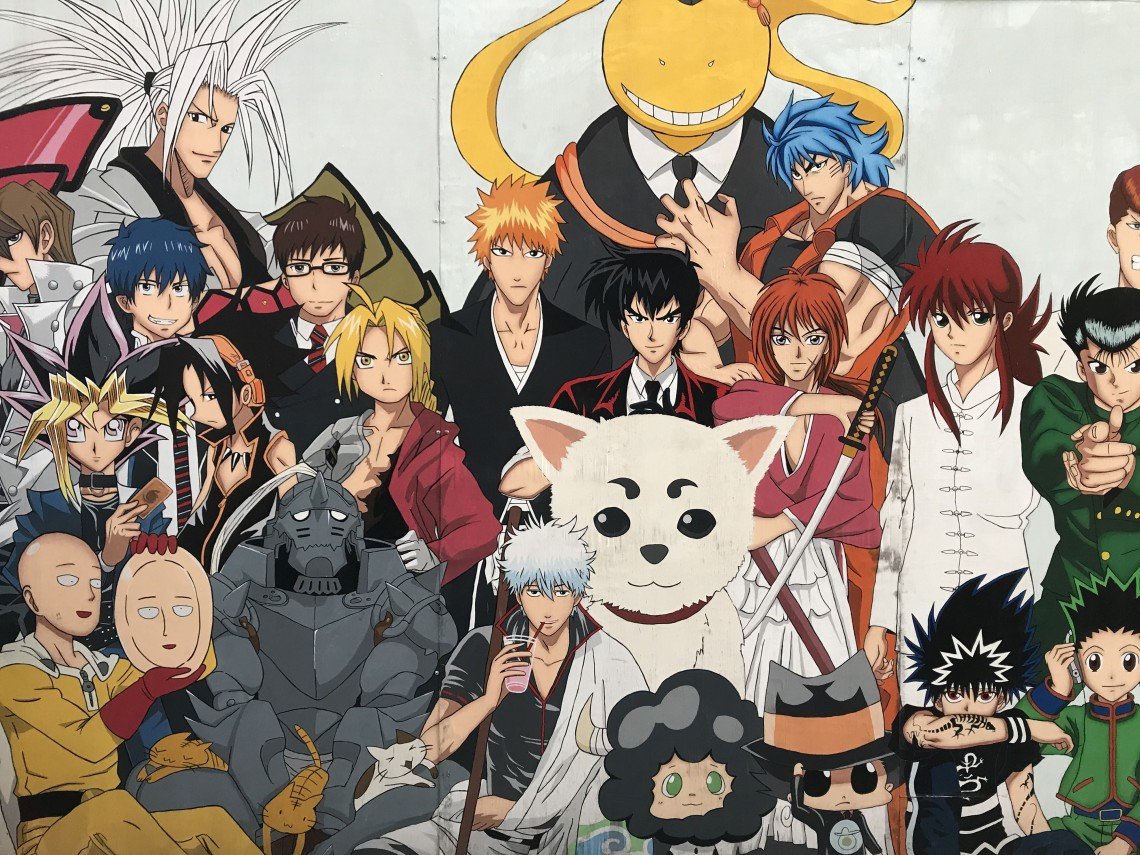 In addition to older shows like Yu Yu Hakusho, there are a bunch of newer series illustrated like One Punch Man.

Can anyone identify where the cats and dog are from? 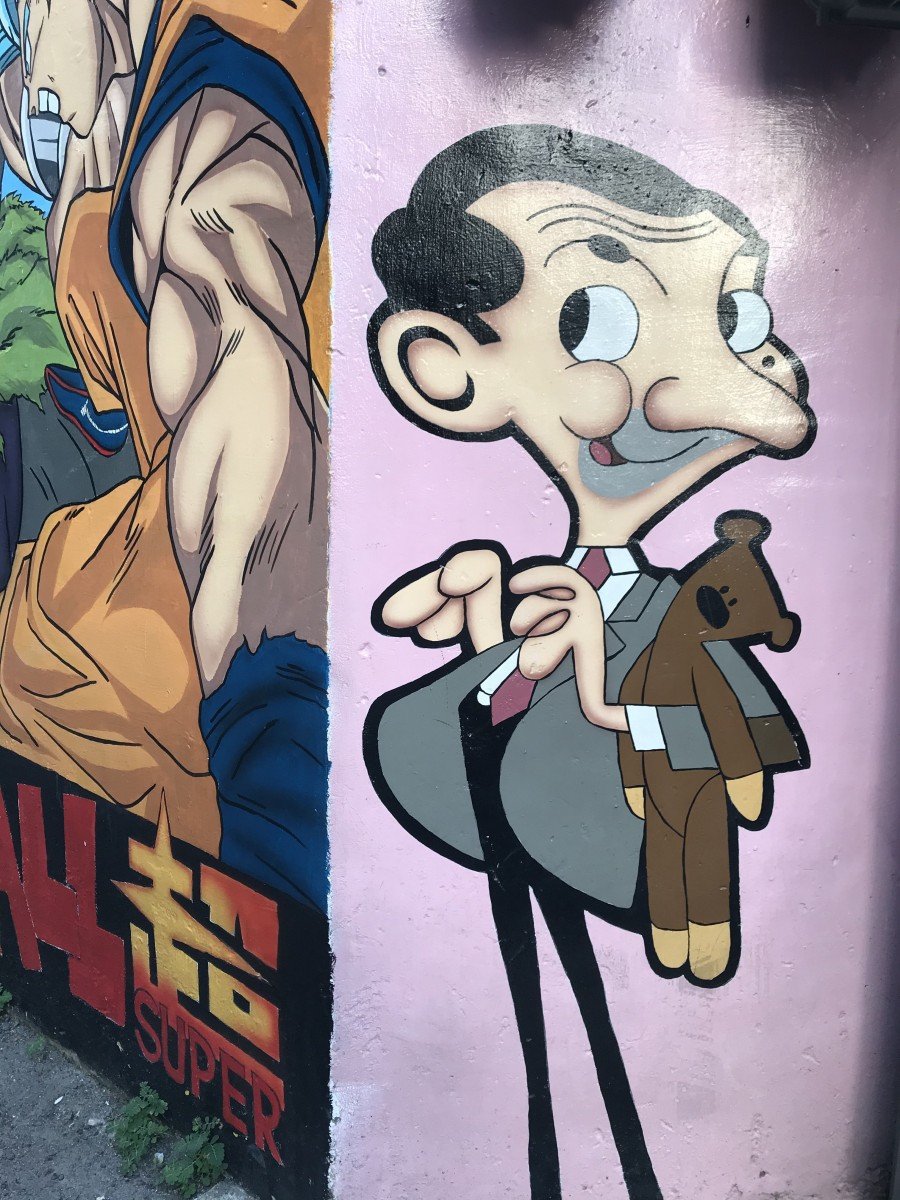 Mr. Bean was a weird one for me to find. It makes it seem like he’s up to no good with the mural next door. 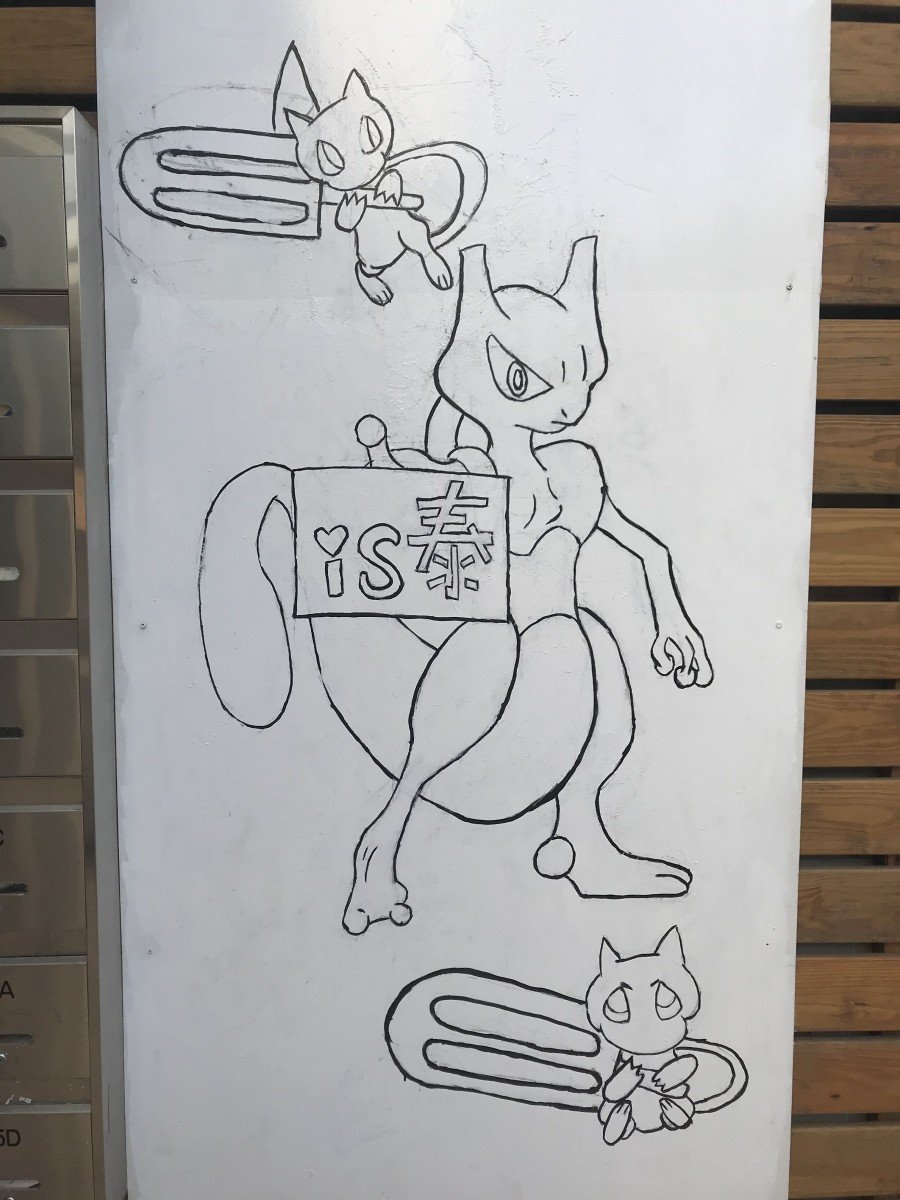 There’s a small dessert shop in Painted Animation Lane. The shop seemed to be working on another mural. This Pokemon-inspired mural, features two Mews holding ice pops with a Mewtwo in the center. 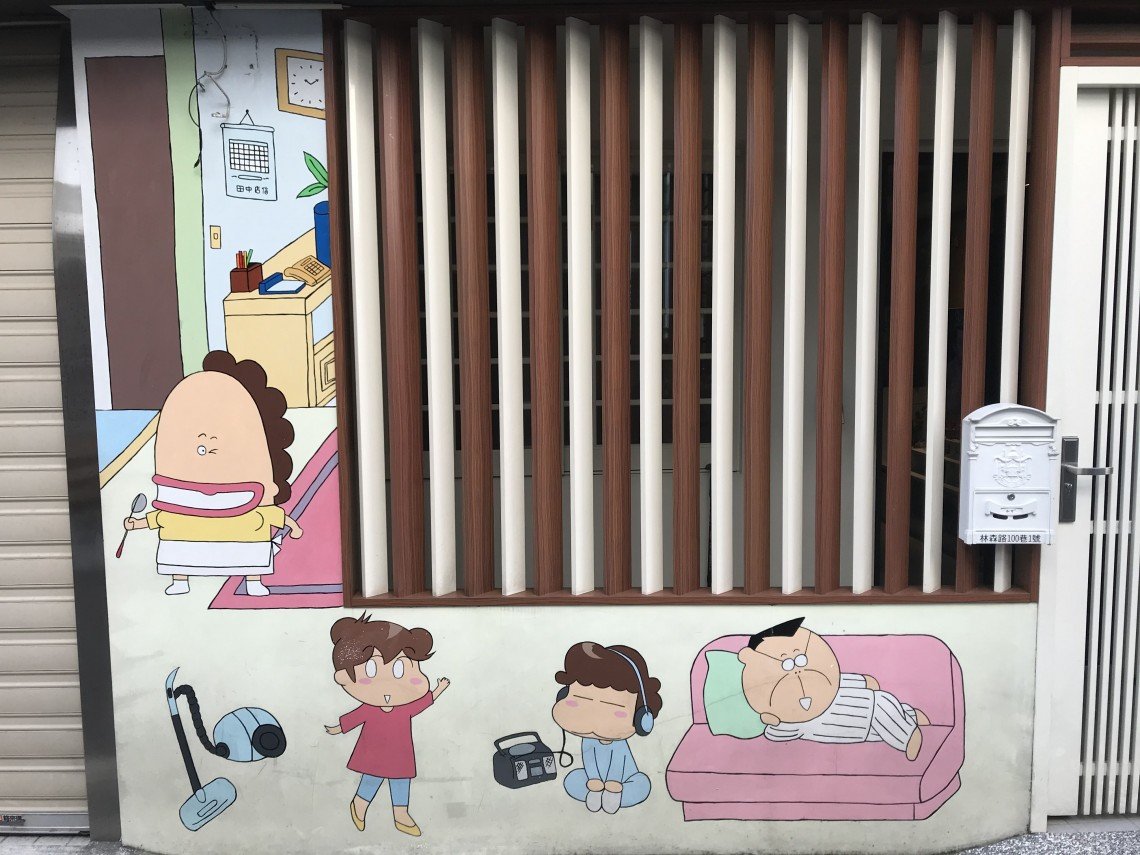 Not at all familiar with this series, but the character design is definitely something else. 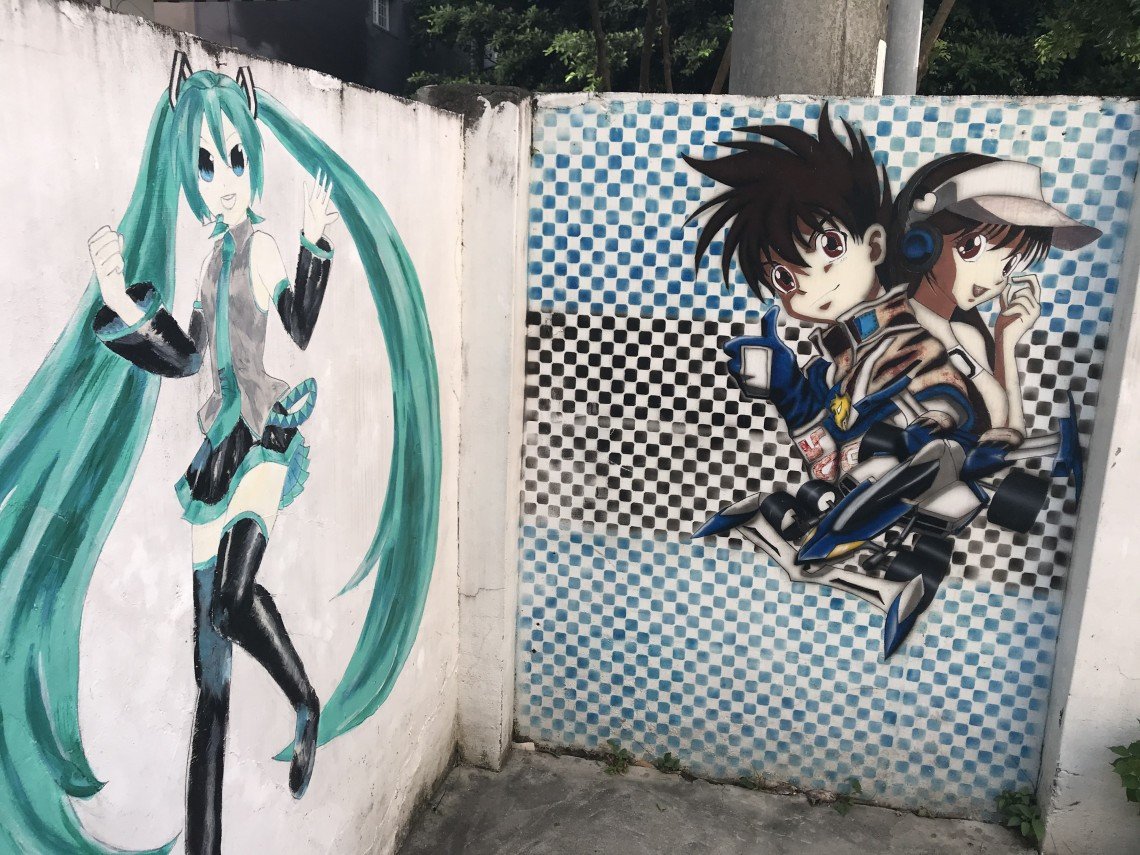 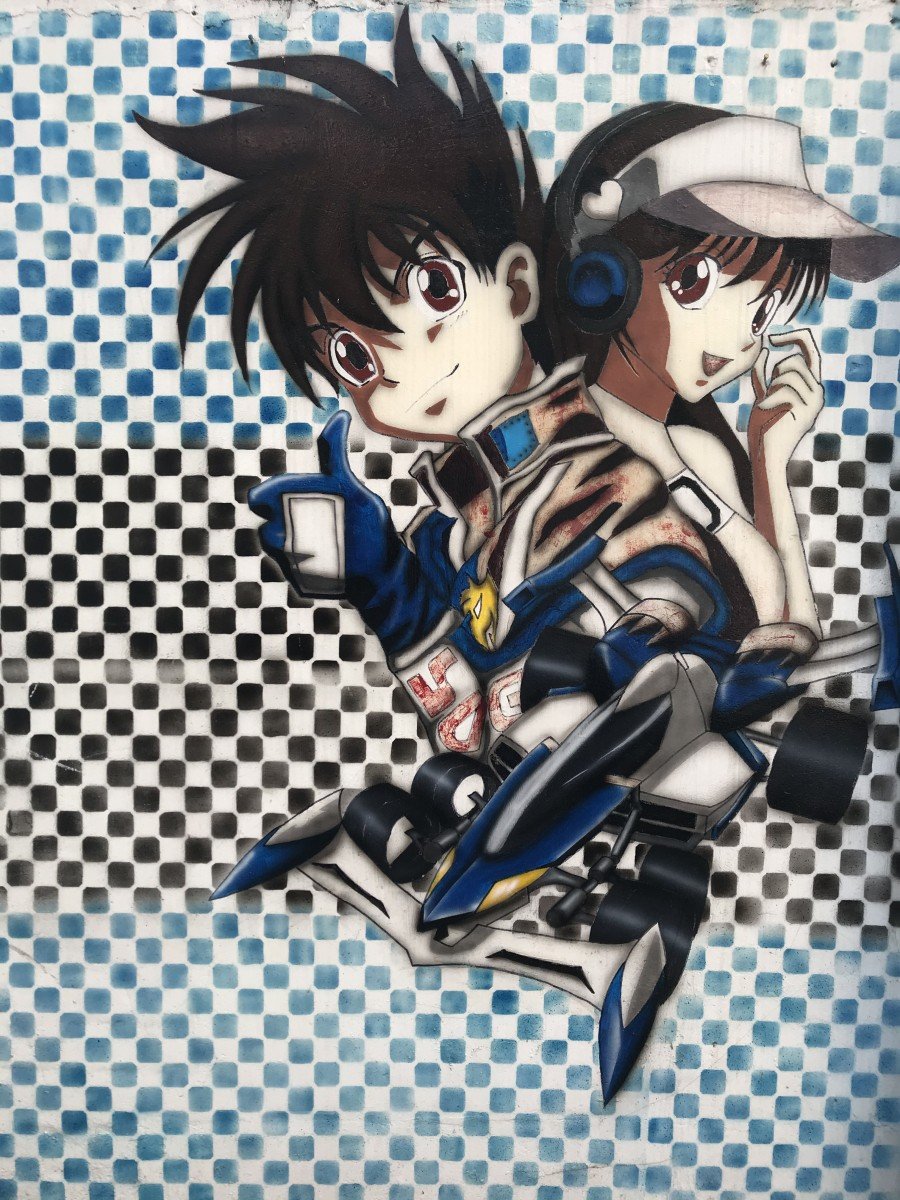 Looking at the designs up close, there’s definitely a large attention to detail. I like the checkerboard pattern done with spray paint. 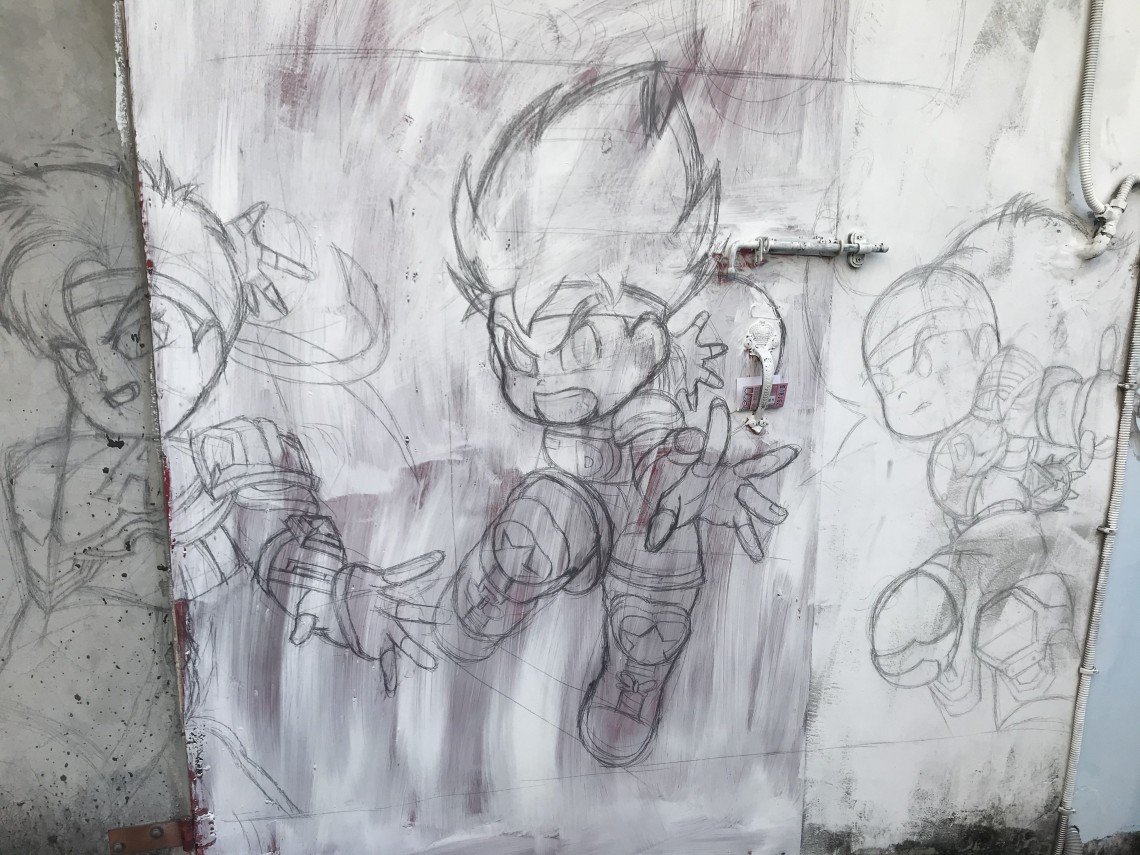 The space is always evolving, it seems. Here are some pencil sketches of a future street art piece. 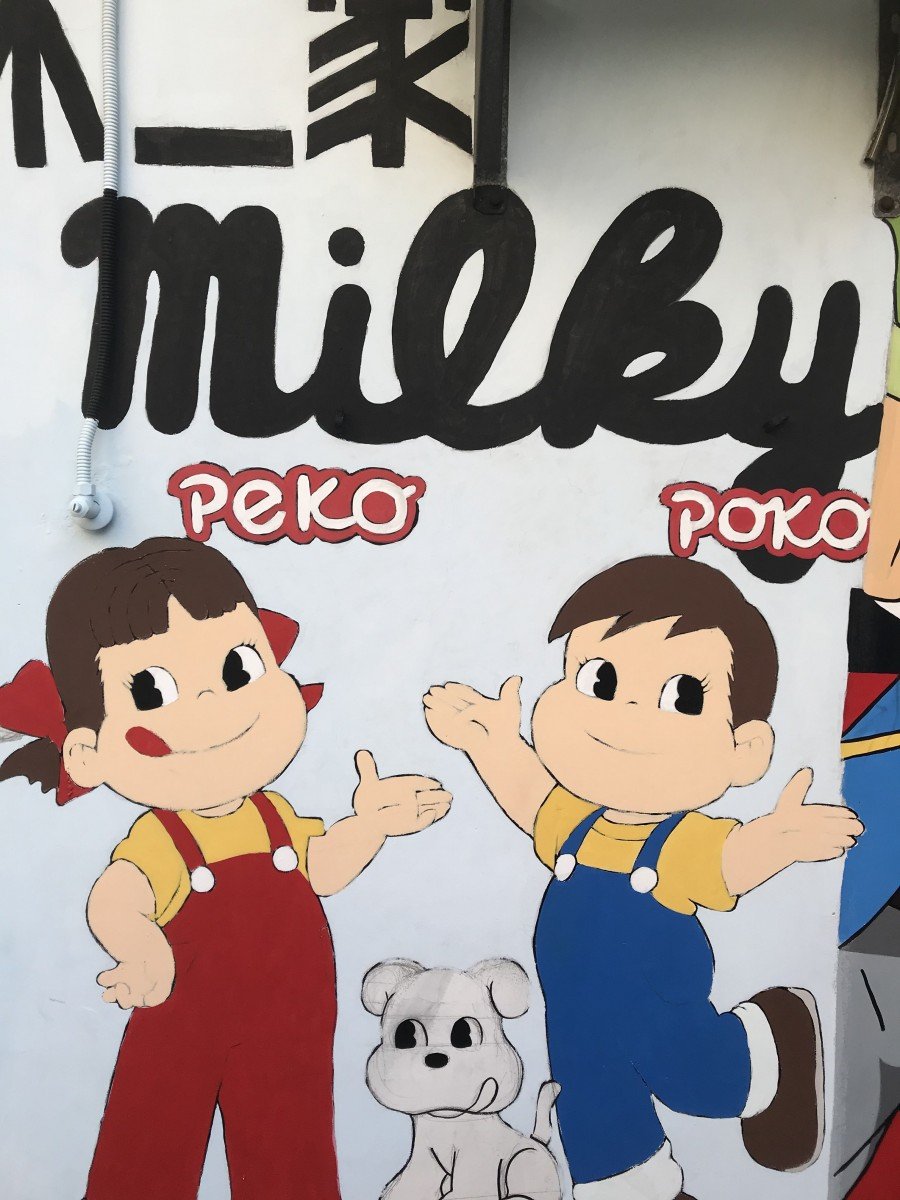 I knew about the Milky girl, Peko. I used to eat the Japanese version of White Rabbit candy all the time. What I was surprised to learn is that there is a boyfriend, Poko, and a dog (named “Dog”). 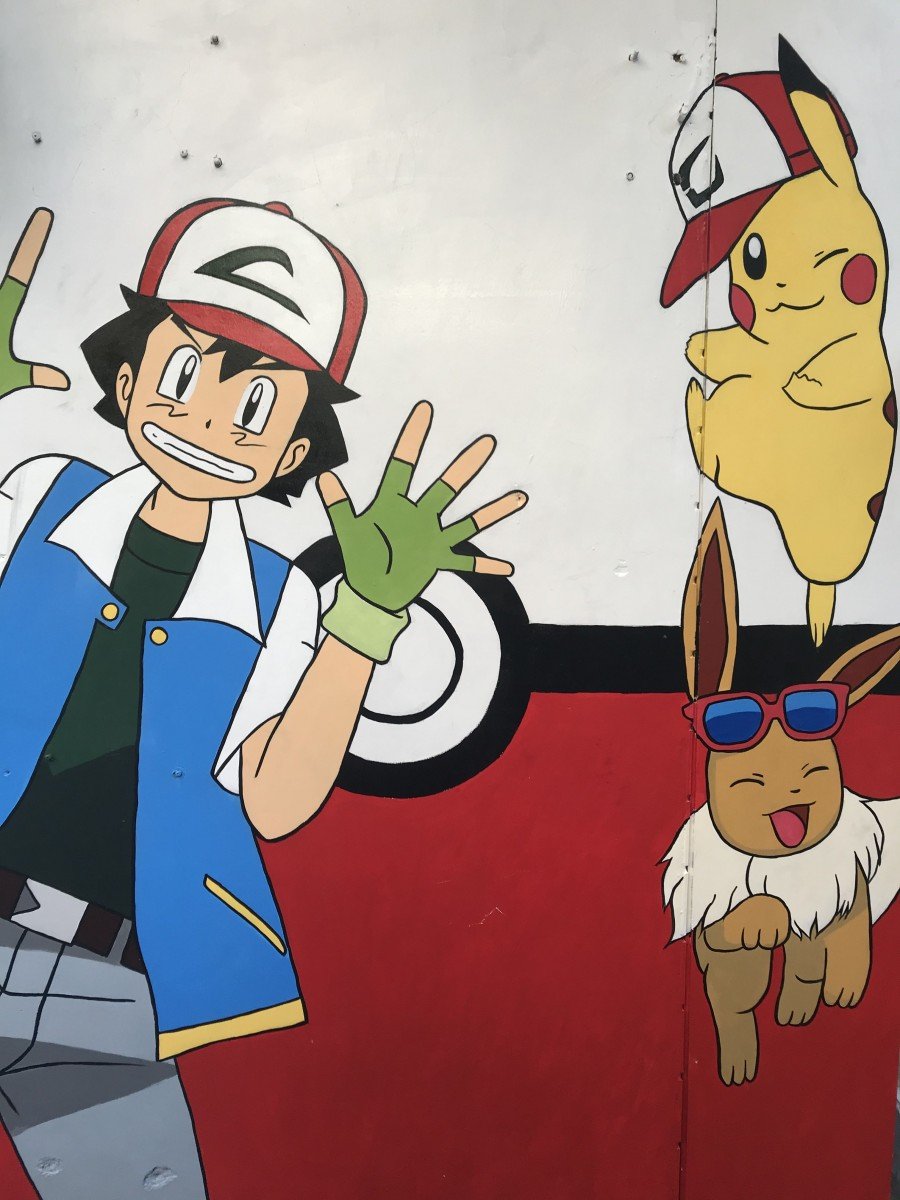 How could they forget Pokemon. This mural features Ash and his companions Pikachu and Eevee. 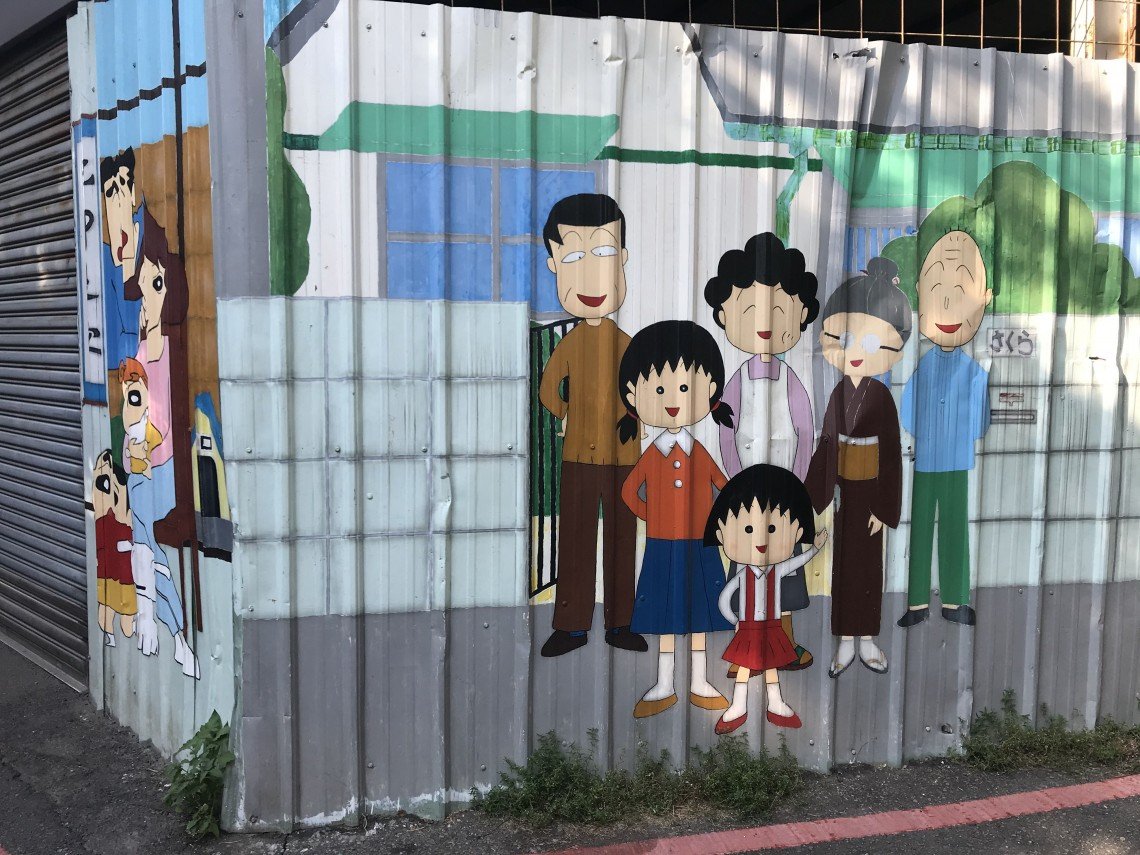 I vaguely remember watching this anime growing up. 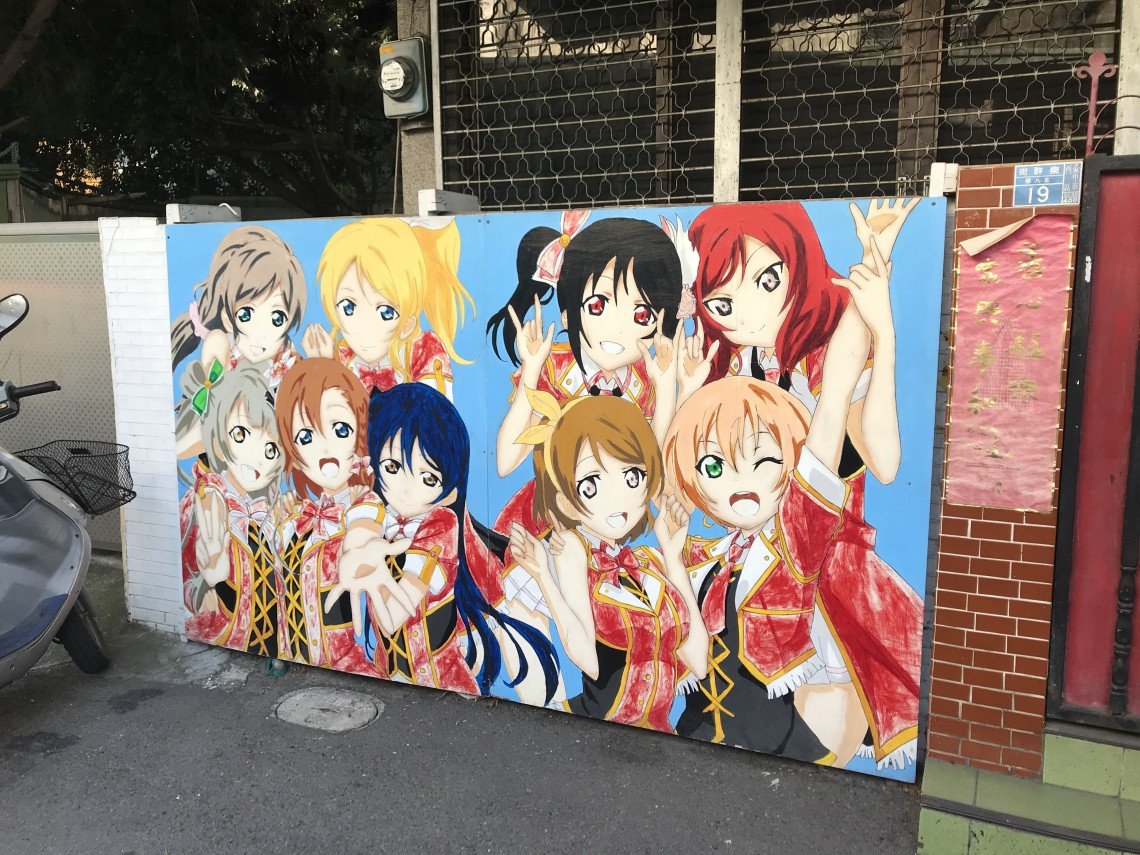 Not all the pieces here are done on walls. Some of them, like this one, look like they were created on wood then tacked onto a wall. 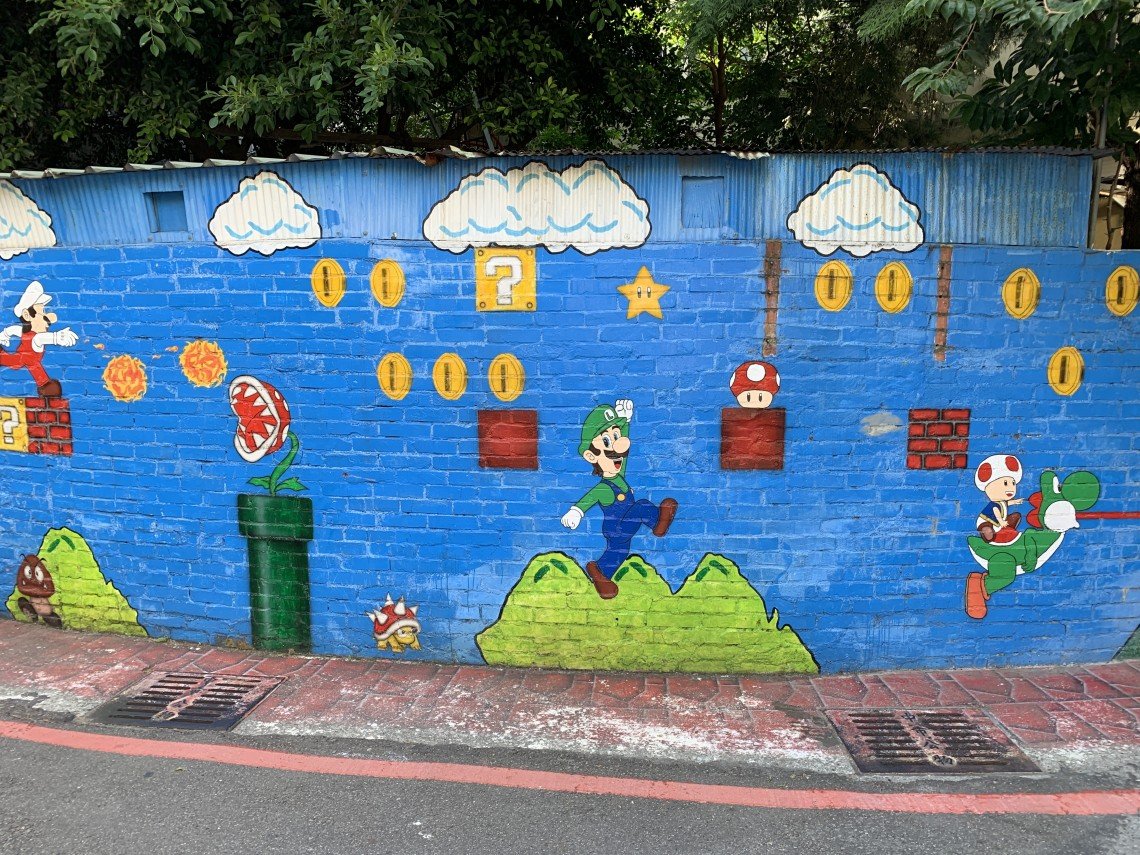 Watch out Luigi. There’s a spiny behind you! 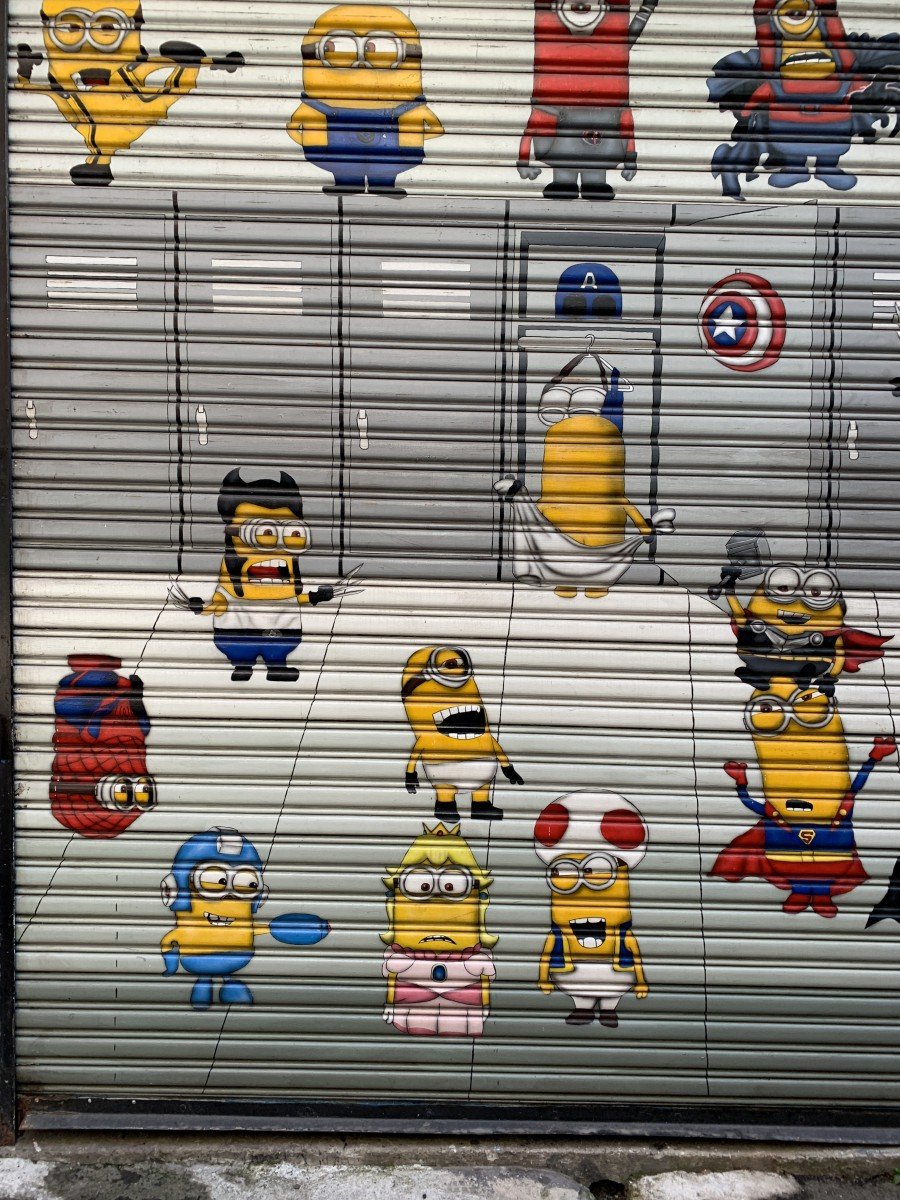 I can just imagine all the cackling and sounds going on in this mural featuring minions. 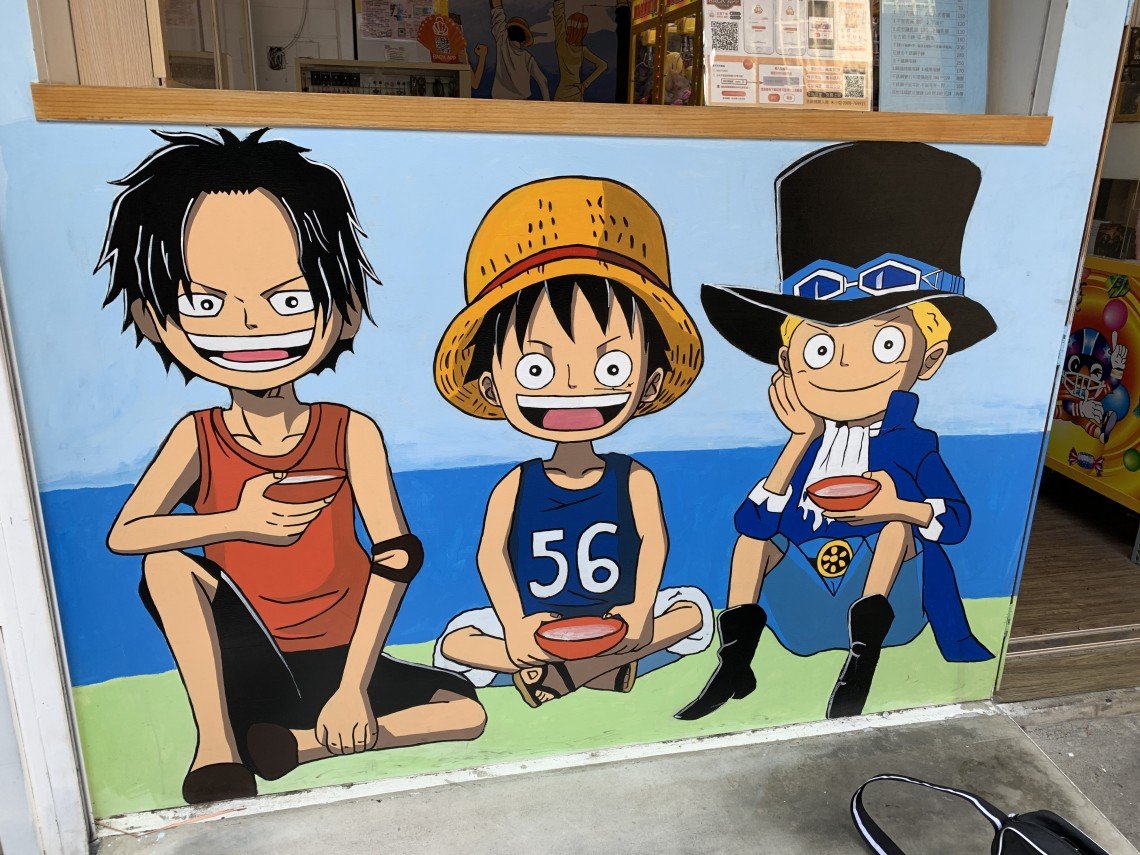 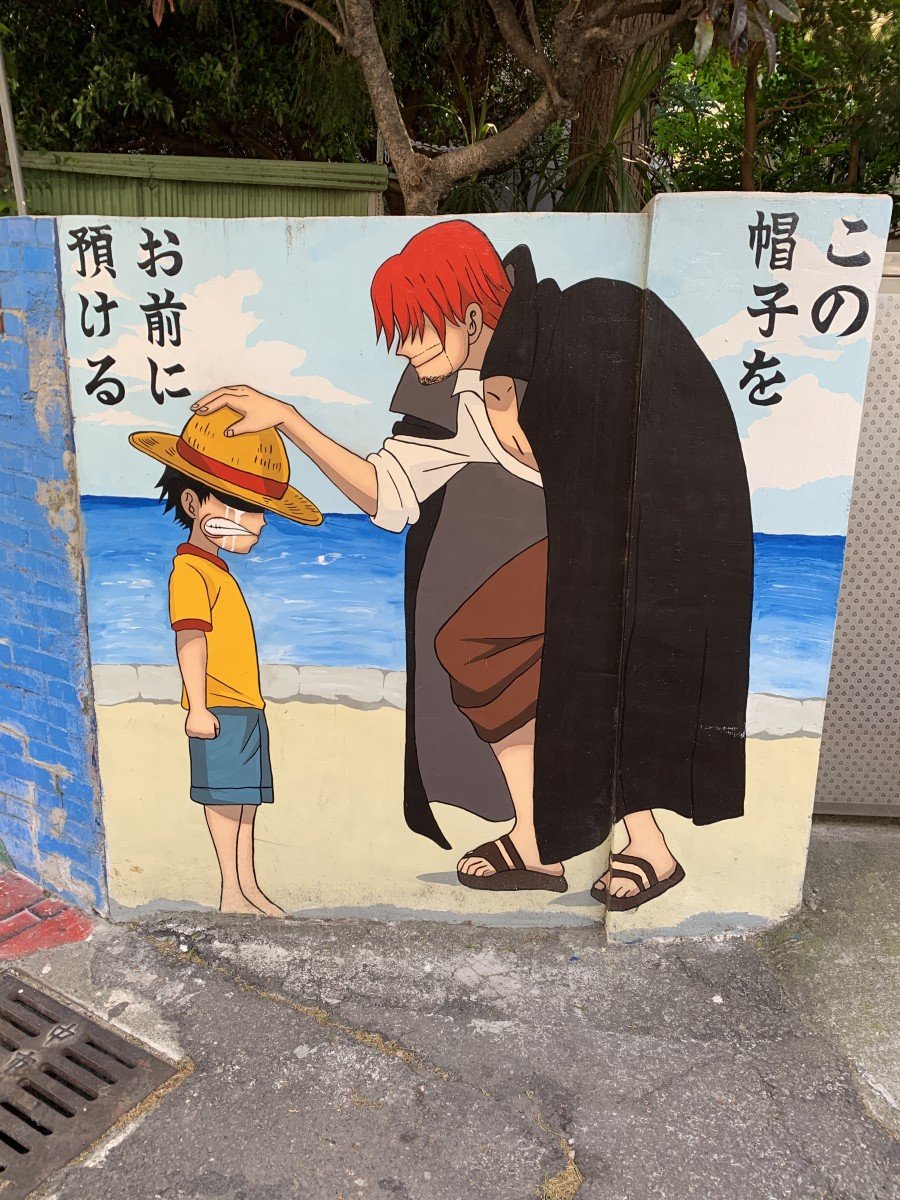 「この帽子をお前にあ預ける—I will leave this hat to you. 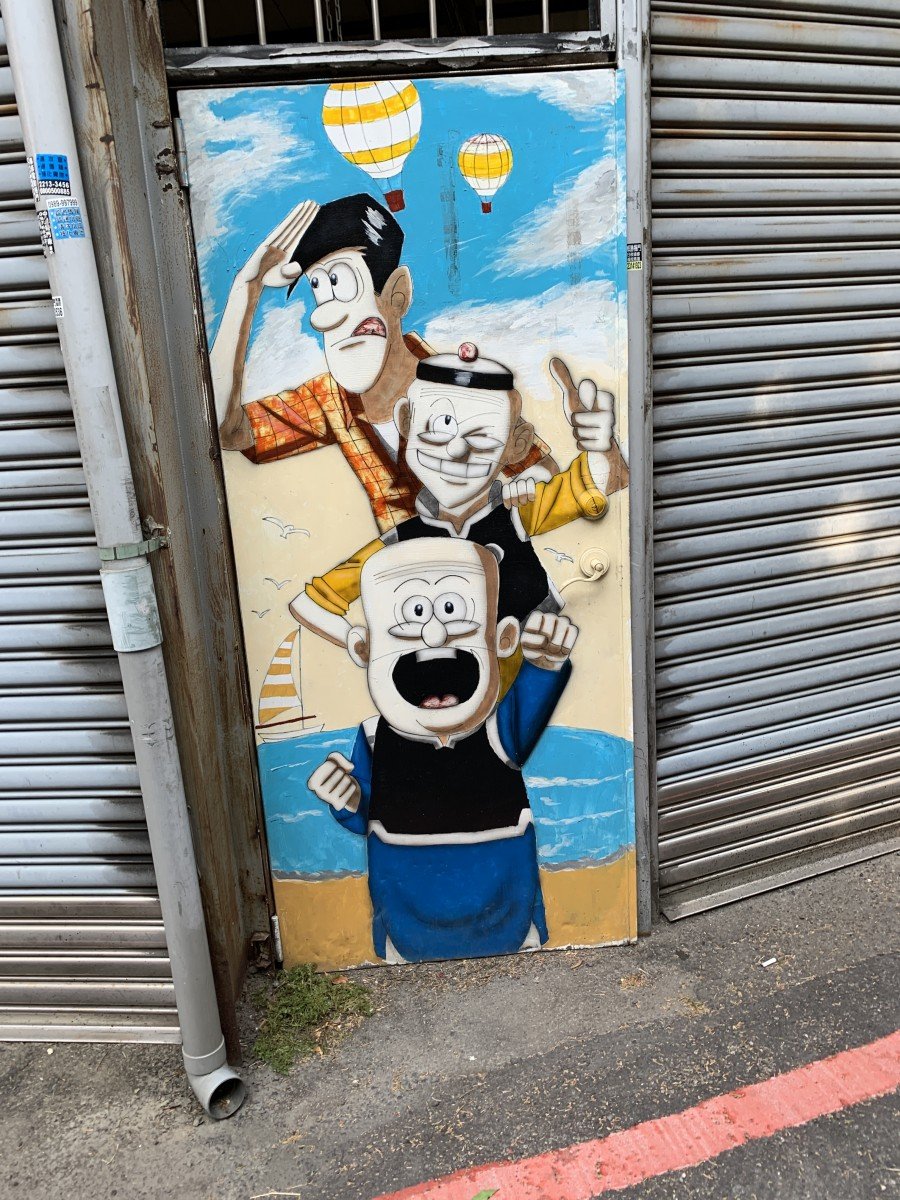 Another animated series that I’m not too familiar with.

For a small alley, there’s a lot to take in. Art-wise, I would say it’s about the same size, if not bigger than the art found at the Danei Totoro Bus Stop. If you’re in the area, pick up a nice drink and stroll on by. After, you can head to downtown Taichung to get some ice cream from Miyahara.