Visiting the Queen (and Fairy’s Shoe) in Yehliu Geopark

Taiwan is home to dozens of wonders. From the majestic cliffs of Taroko Gorge to the eternal flame (恆春出火 / heng chun chu huo) in Kenting, the geography of the island never ceases to amaze me. Not surprisingly, when I found out about a little park with unique geological formations, a little area known for its geological wonders, Yehliu Geopark (野柳地質公園 / ye liu di zhi gong yuan), I was excited to check it out.

Yehliu Geopark is located in the northern part of Taiwan, due east from Yangmingshan (陽明山 / yang ming shan) in Wanli District (萬里區 / wan li ou). It is also known as Yehliu Cape and Yehliu Promontory. There are a lot buses from Taipei to the Yehliu Geopark, so it’s not very hard to get to. There are also many busses that do routes including Jiufen and Shifen, making this area pretty accessible for tourists. A majority of the parking lot, in fact, is dedicated bus parking.

This is a plus and a minus.

The sheer number of tourists coming to this area means that, unless you come early in the morning, it’s going to be hard to take a photo without waiting for someone to get out of the way. At times, it can feel like Disneyland walking through narrow paths. It also means that it’s easier to take those group photos as there are people to easily take your photo for you, including many tourists from countries like Korea, Philippines, Japan, and the United States. 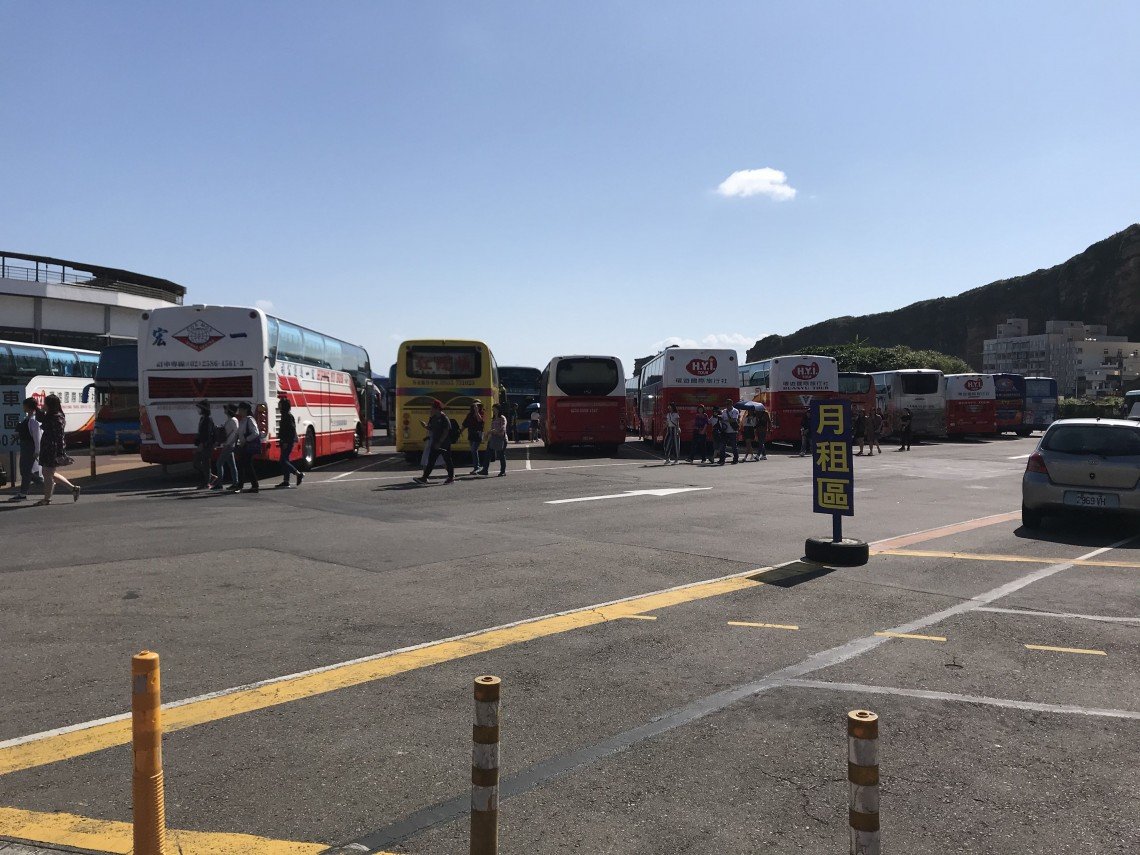 As we had a friend in town visiting from Hong Kong for a few days, we picked up a tour from Taipei Main Station. This tour took us to a series of stops including Shifen and Jiufen. Our first stop, though, was Yehliu to beat more of the crowds that would be coming as the day progressed. 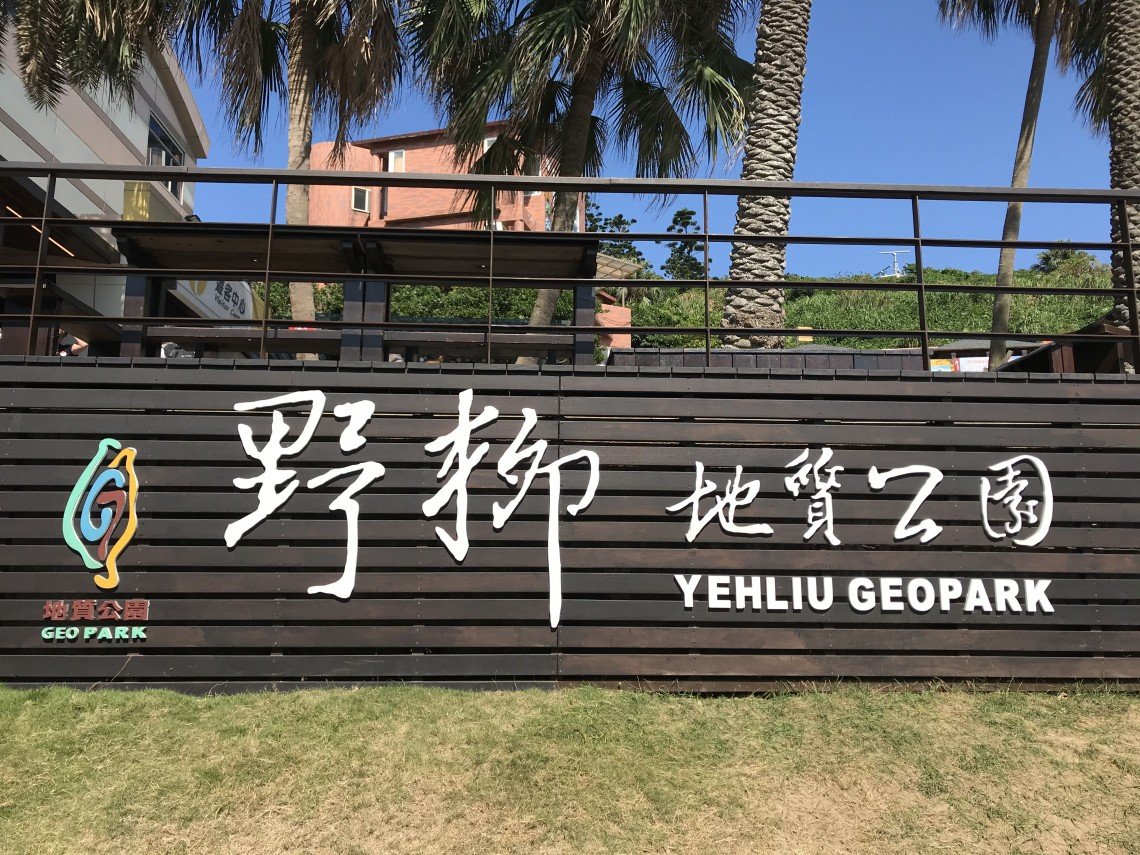 This is the entrance to the geopark. I love how rustic the sign looks, appropriate since the first character means wild, countryside, outskirts.

Yehliu Geopark is part museum and scenic attraction. While showing you the natural beauty of the area, the park also makes an effort to educate, which I enjoyed. I also loved how creative people are, seeing geological formations then giving them fun names like “Tofu Rock.” 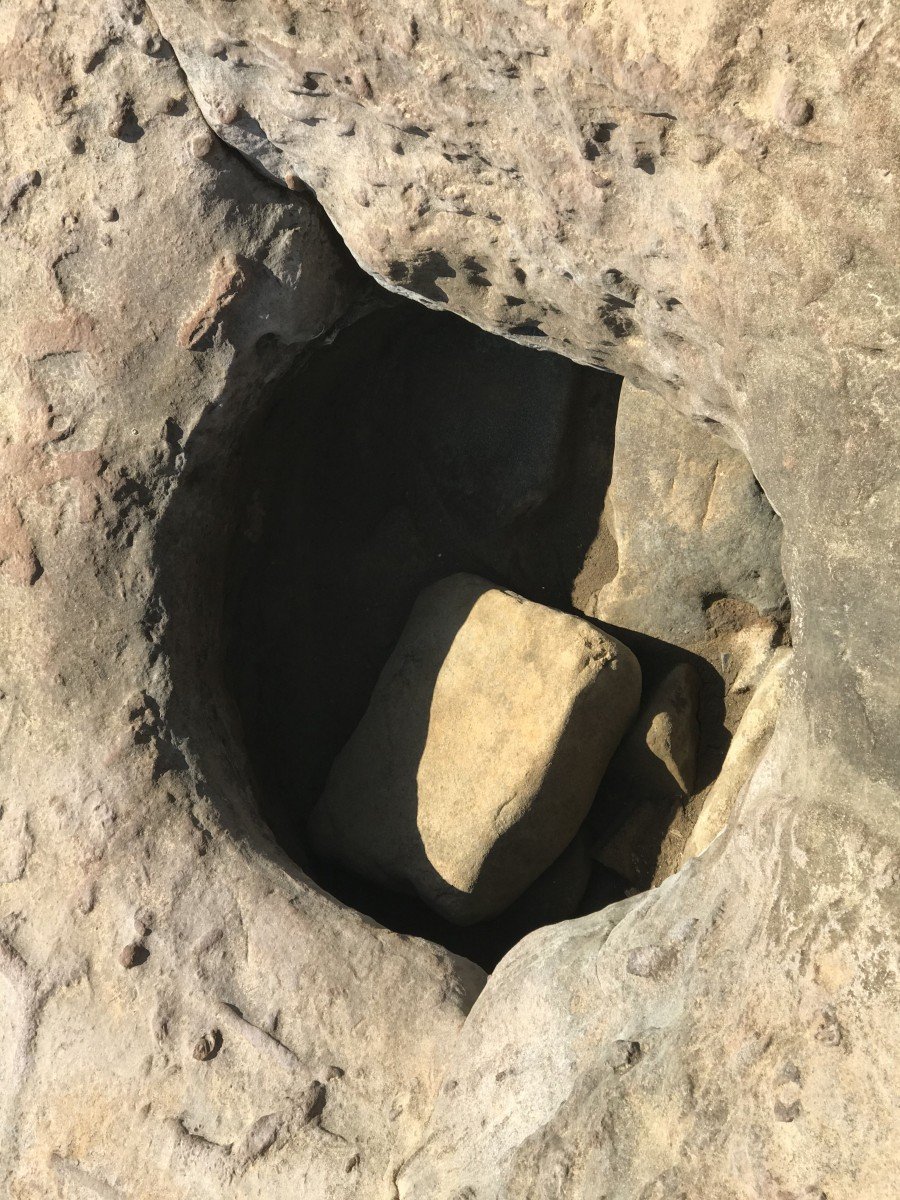 The geological formations in this part of Taiwan, happen as a result of sedimentary rocks from the area being weathered away. Softer rocks erode, leaving the harder rocks like iron standing. Many rocks exhibit a brown tinge, created by a combination of sandstone and the leftover iron. 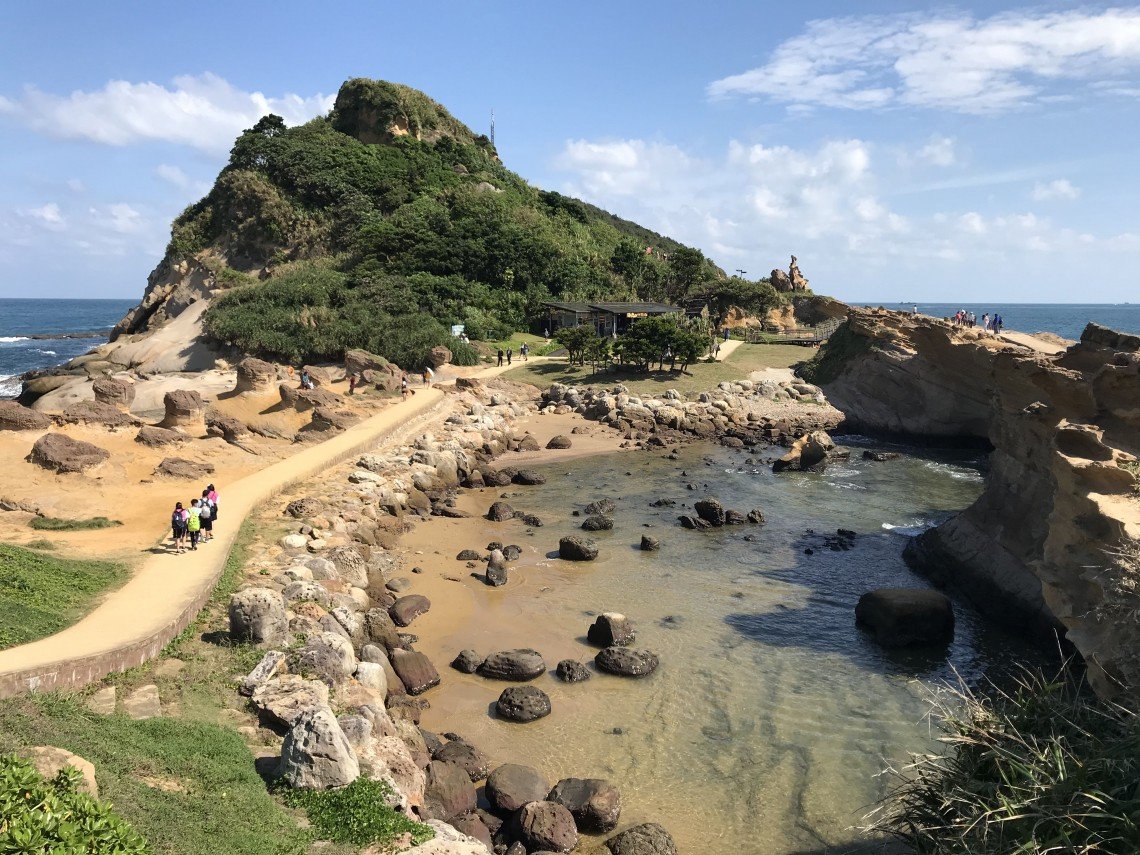 Additional features, like the Gueitou Mountain (龜頭山 / gui tou shan), a cuesta, have been formed from the earth’s crust moving against each other in the ocean.

Yehliu can be divided into three sections. The first, closest to the entrance, has a few features including the sea trench and Candle Rocks. The second section includes a majority of the famous rock formations, including the ever-so-popular Queen’s Head. The last section, takes you onto Turtle Head Mountain (龜頭山). In the above photo, the building in the background denotes the last section of Yehliu Geopark.

When visiting this park, I would totally recommend bypassing the first section. Instead, first head to the second section where the most popular rocks are. If you have time, venture past the building onto Turtle Head Mountain, where you will find even fewer people and more scenic views of the local geography. When you’re finished taking photos with the Queen’s Head (which typically has a line and a ton of regulations around photo taking) and other geological formations in section two, you can have more of section one to yourself as people from section one will have begun crowding section two.

Many of the rocks look something like this. It’s crazy to me that you can go up close to these rocks and that you can walk around fossils even. Be sure not to touch any of the formations though. You don’t want to be whistled at to stop. 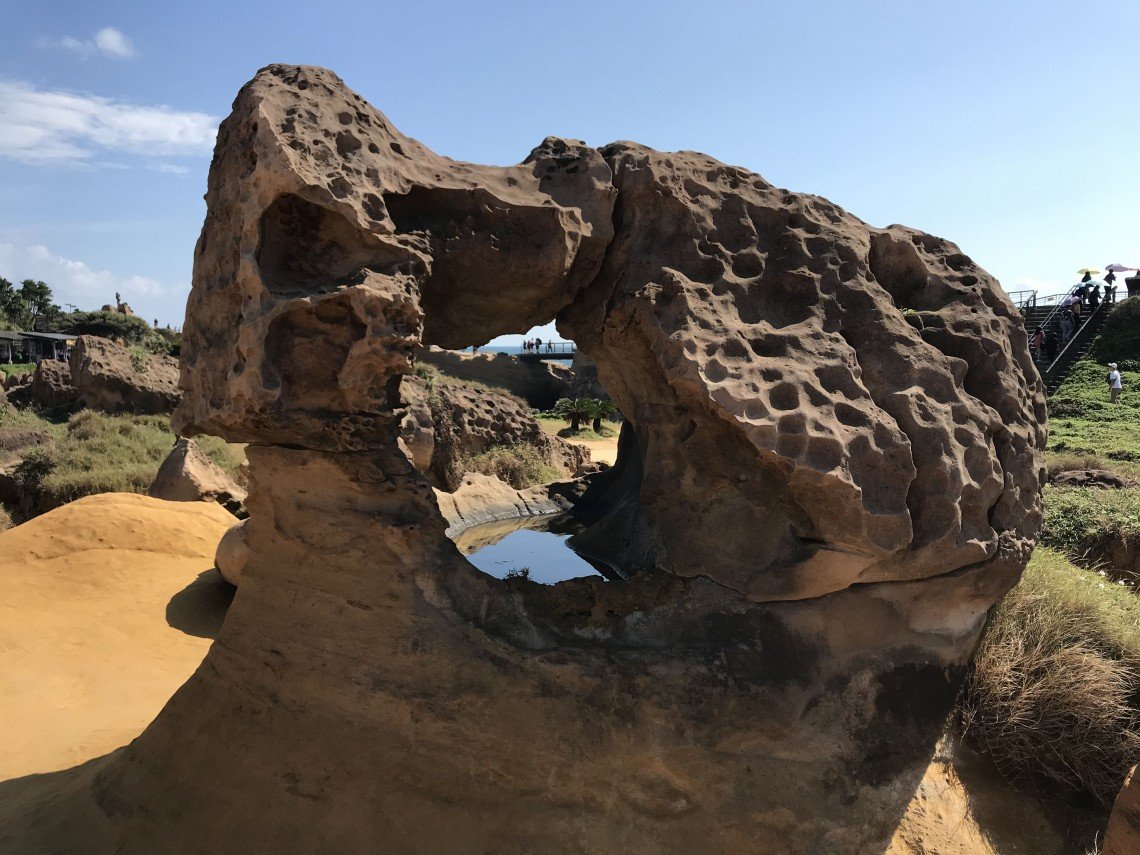 This was probably one of my favorite rocks. I loved how it so nicely framed what was in the background. 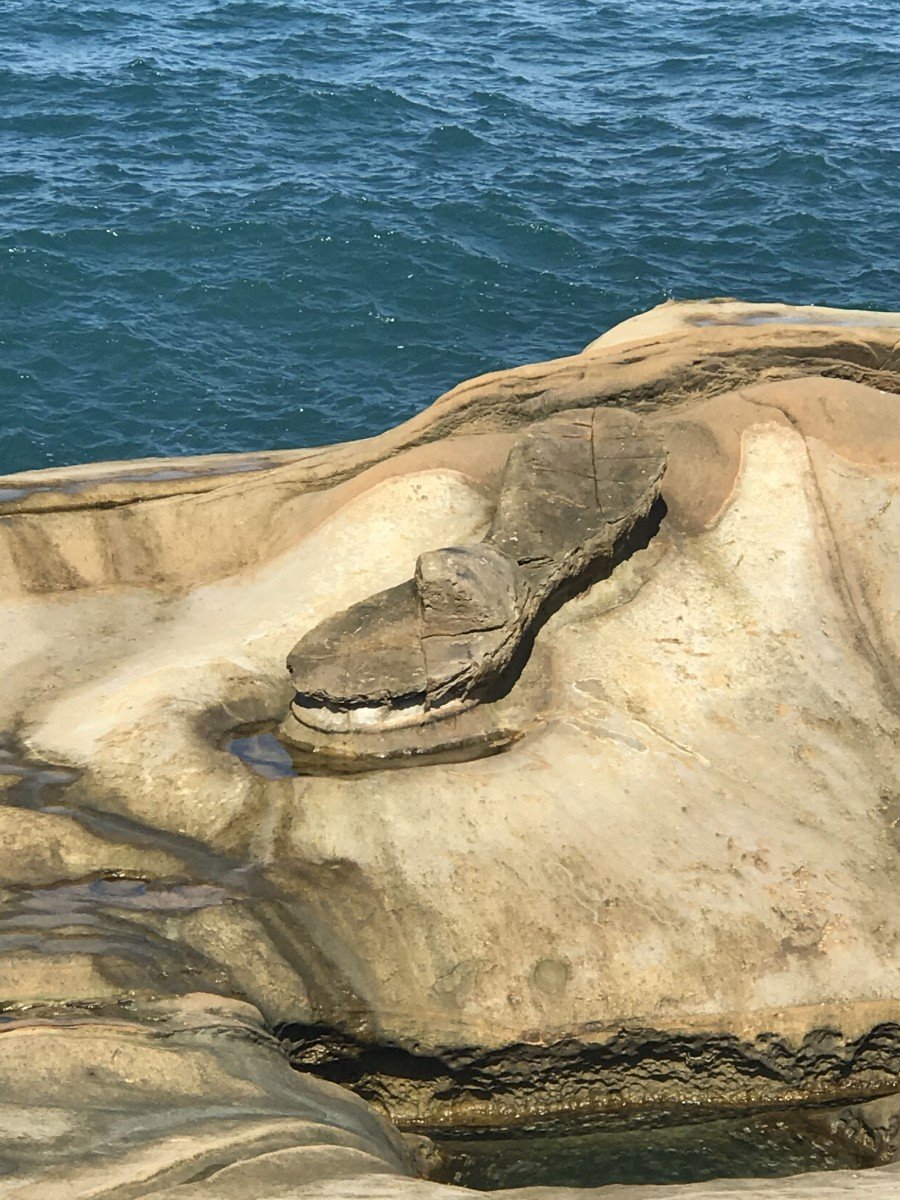 This is the famed fairy shoe. Does it look like a fairy’s shoe to you? 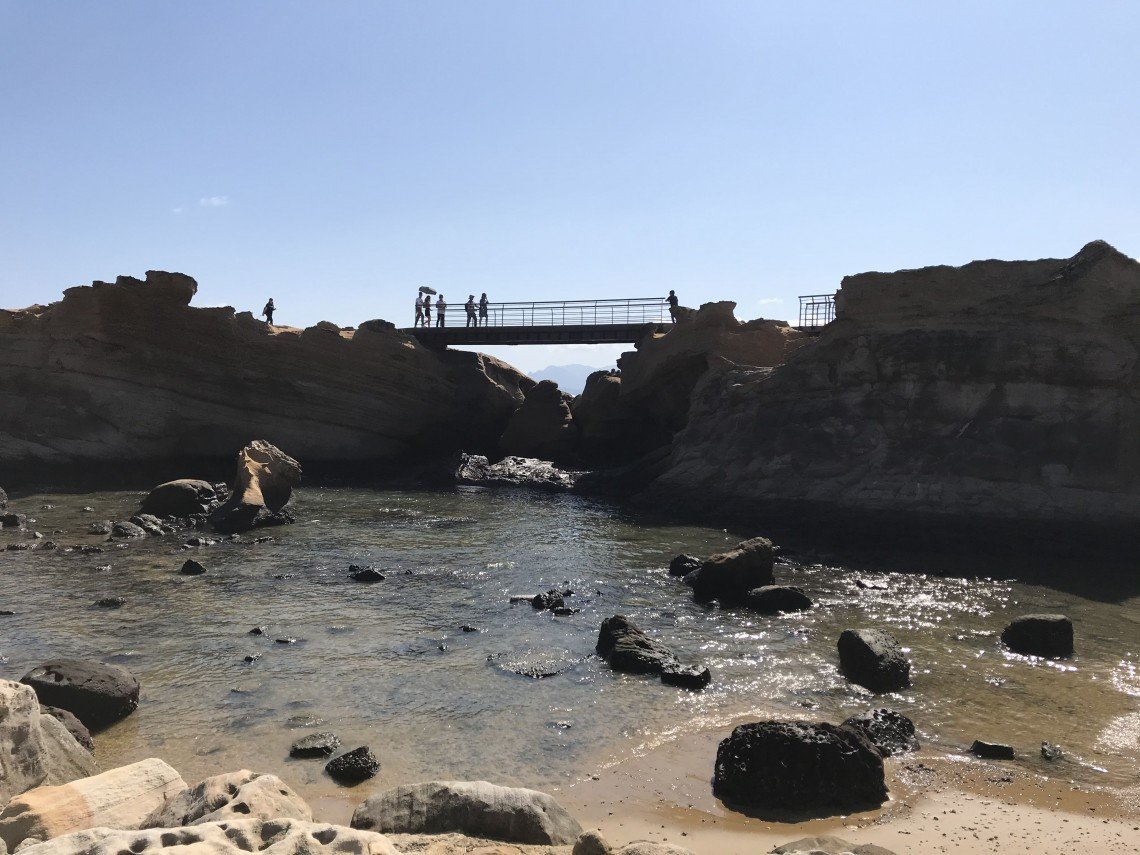 Due to the popularity of the geopark, there are a bunch of new observation platforms and bridges to make viewing safer. In many cases, there are not barriers. The park relies on visitors to not go past certain areas denoted by lines in the sand. 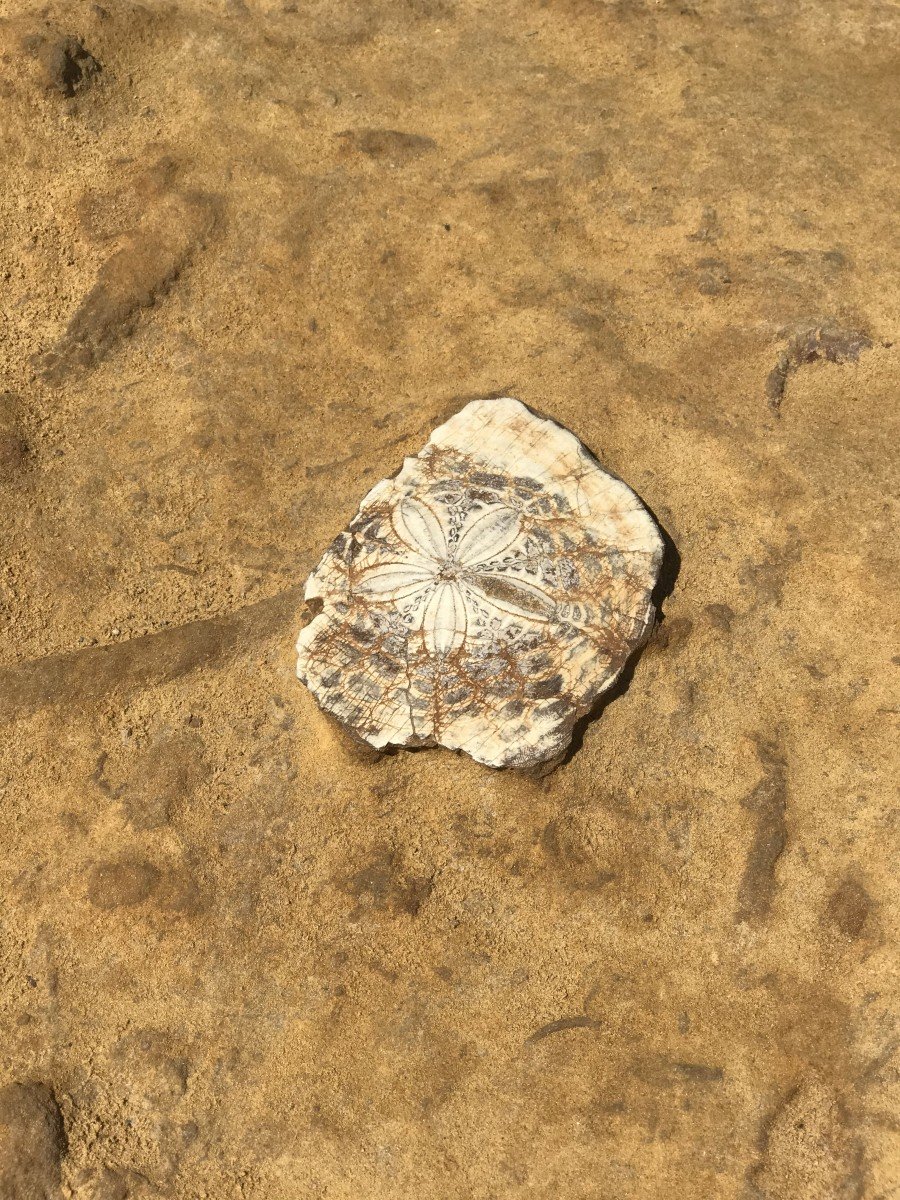 Here’s an example of a fossil that’s just on the beaten path—pretty cool, but also super weird to be able to get so close to this.

These rocks kind of remind me of pumice. 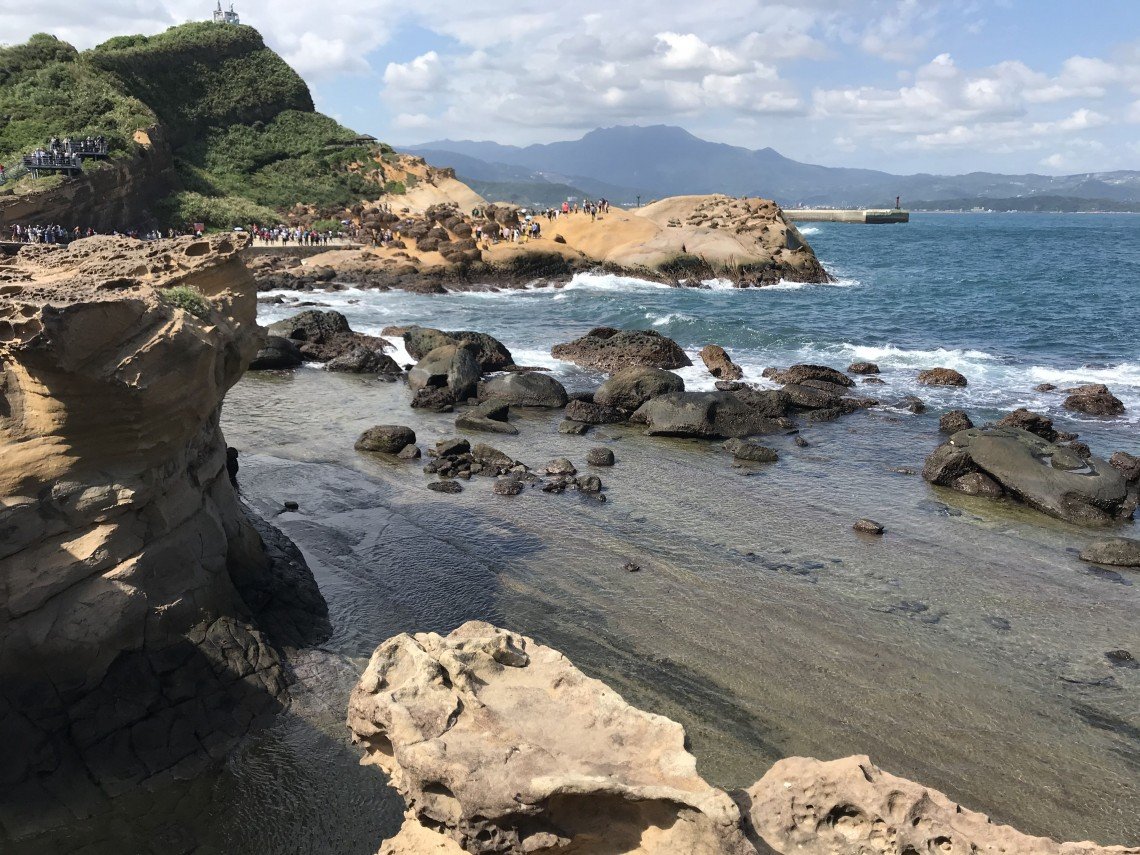 This is a view of the Candle Rock area from section two (near Fairy’s Shoe).

This is The Queen’s Head (女王頭 / nu wang tou), in all her glory. This feature is meant to resemble the side profile of Queen Elizabeth. This is probably one of the most recognizable features in Taiwan, along with Taipei 101. It’s no surprise that there are people nearby to make sure that this geological formation is well taken care of. A fine of up to $5 million NTD should be a deterrent to would be vandals. 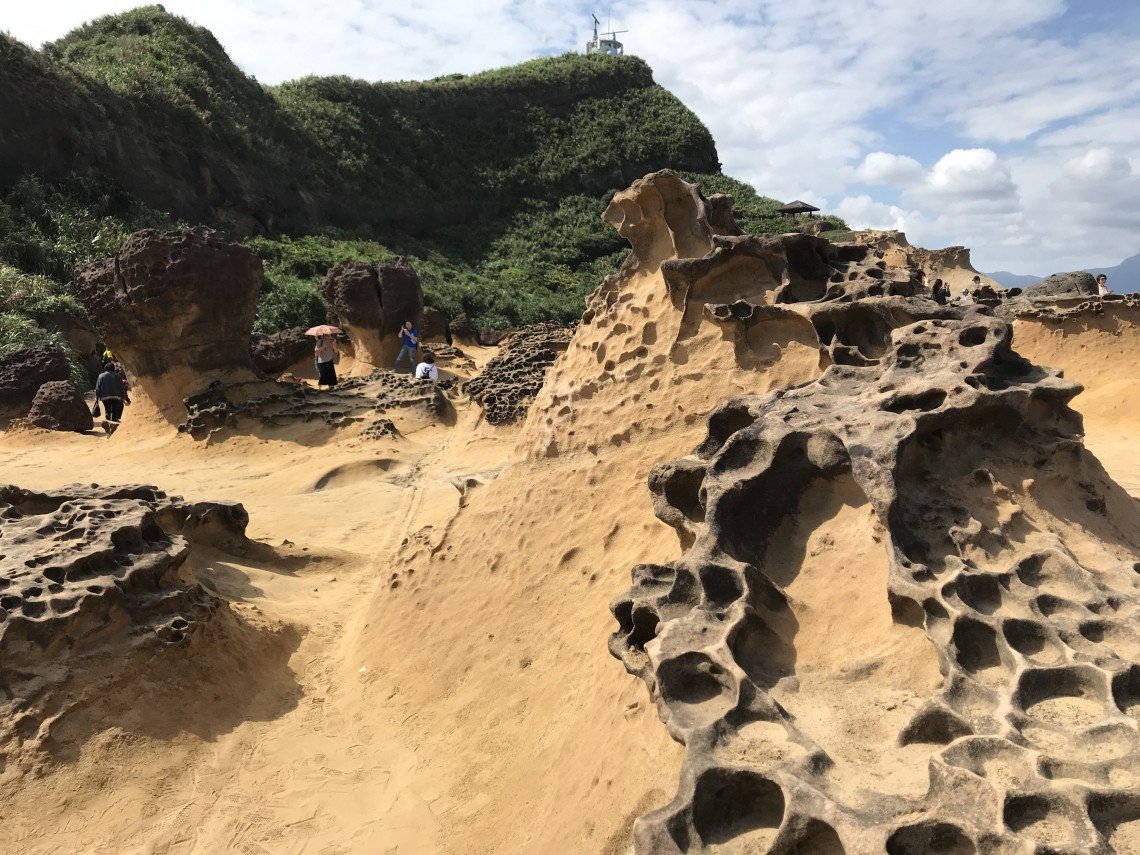 This is the area closest to the entrance of the park, section one. Notice people posing and taking photos in the background. 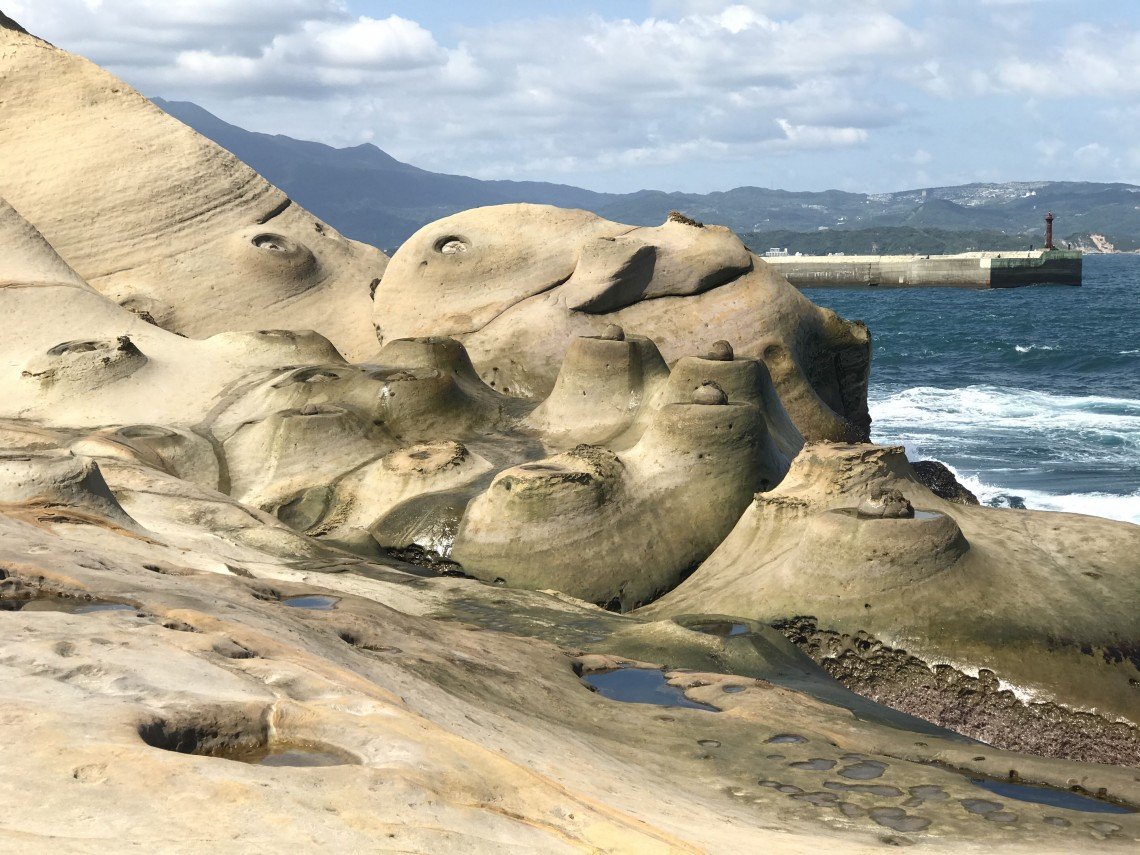 Here is Candle Rock which has been called a bunch of other things including stone clock and stone breast. Not sure which of these I see, but they are pretty cool.

This is Ice Cream Rock. Looks kind of like a sundae. 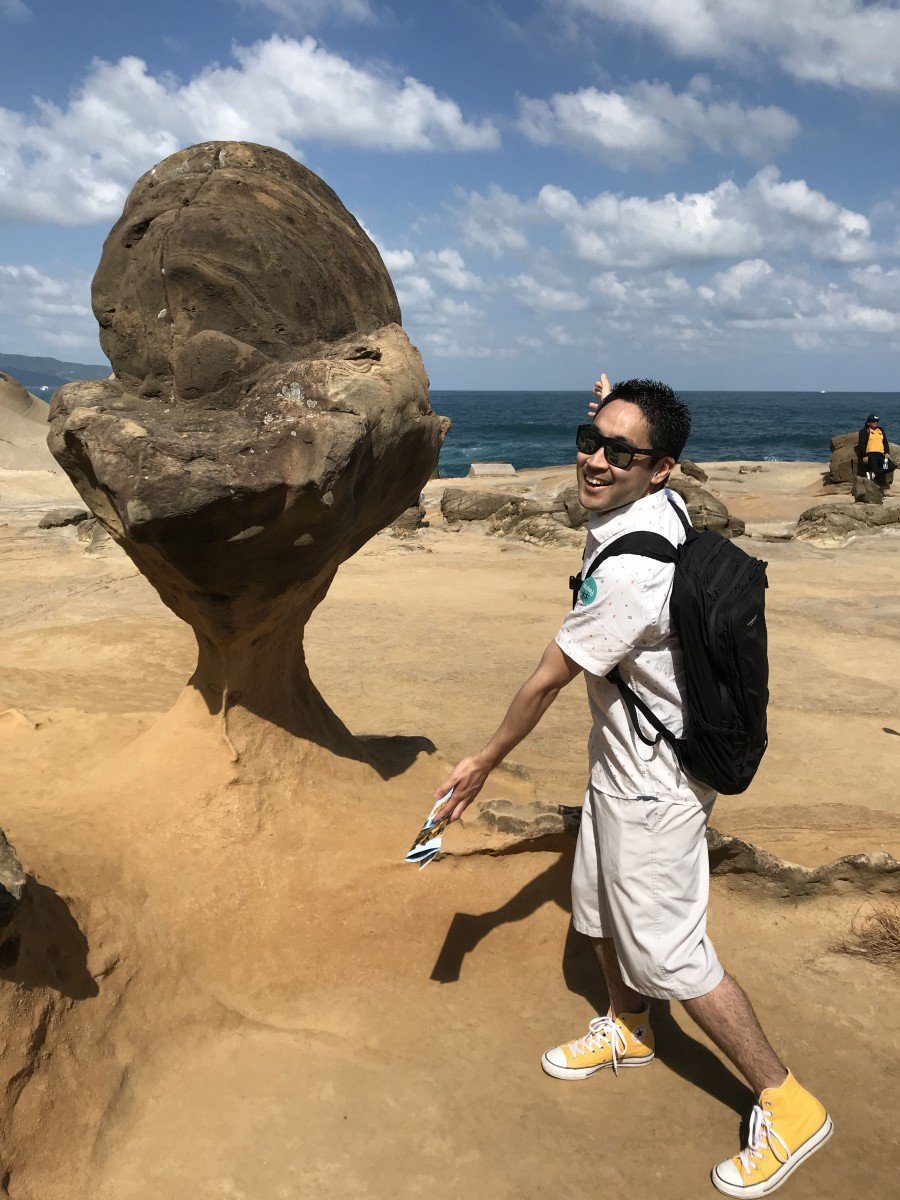 As it was one of the sweetest formations out there, I decided to take a photo with it. Tada! 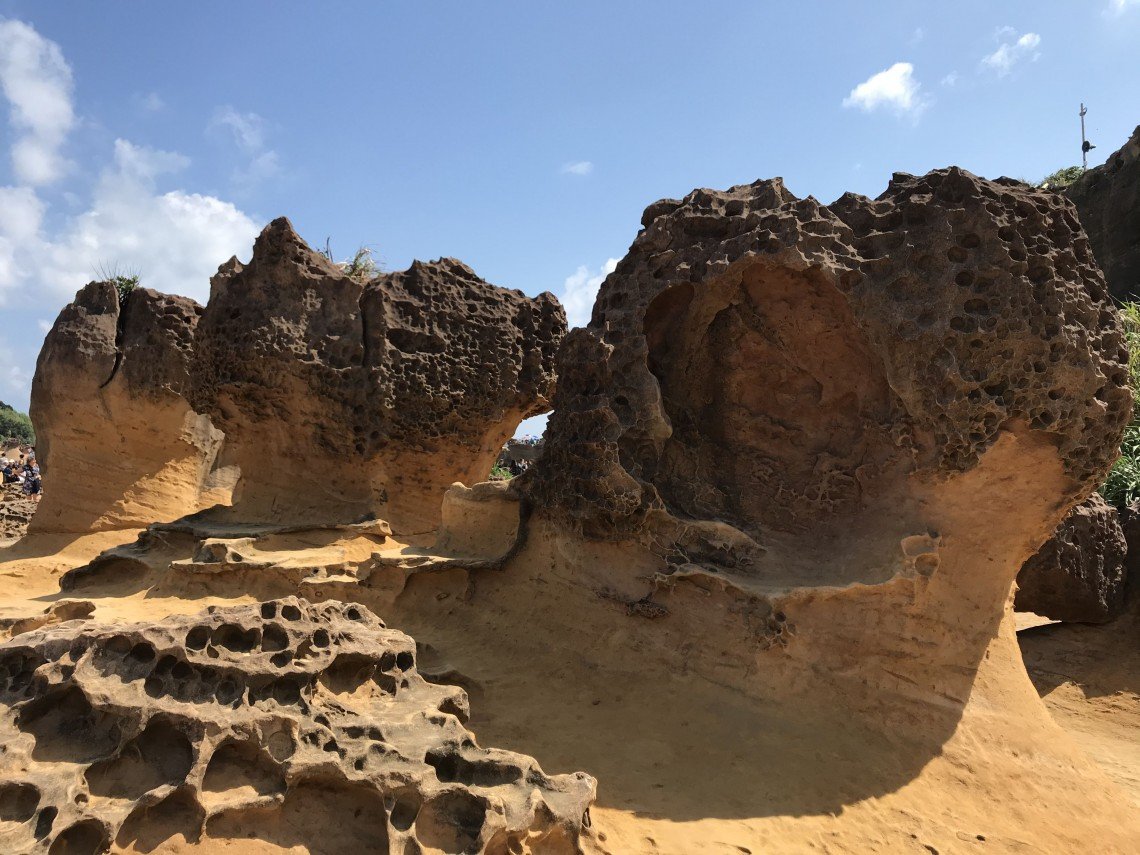 It’s so fascinating going around seeing all the different rock types in the Yehliu Geopark including these mushroom rocks.

Here are some more fossils. At first, they were hard to find, but this was because we ventured to section two first. The first section closest to Candle Rock and Ice Cream Rock has more fossils in plain sight.

These rocks probably have a name, but I don’t remember what they were called. What’s interesting here though, is you can see the white and black paint line, denoting tourists not to go past. 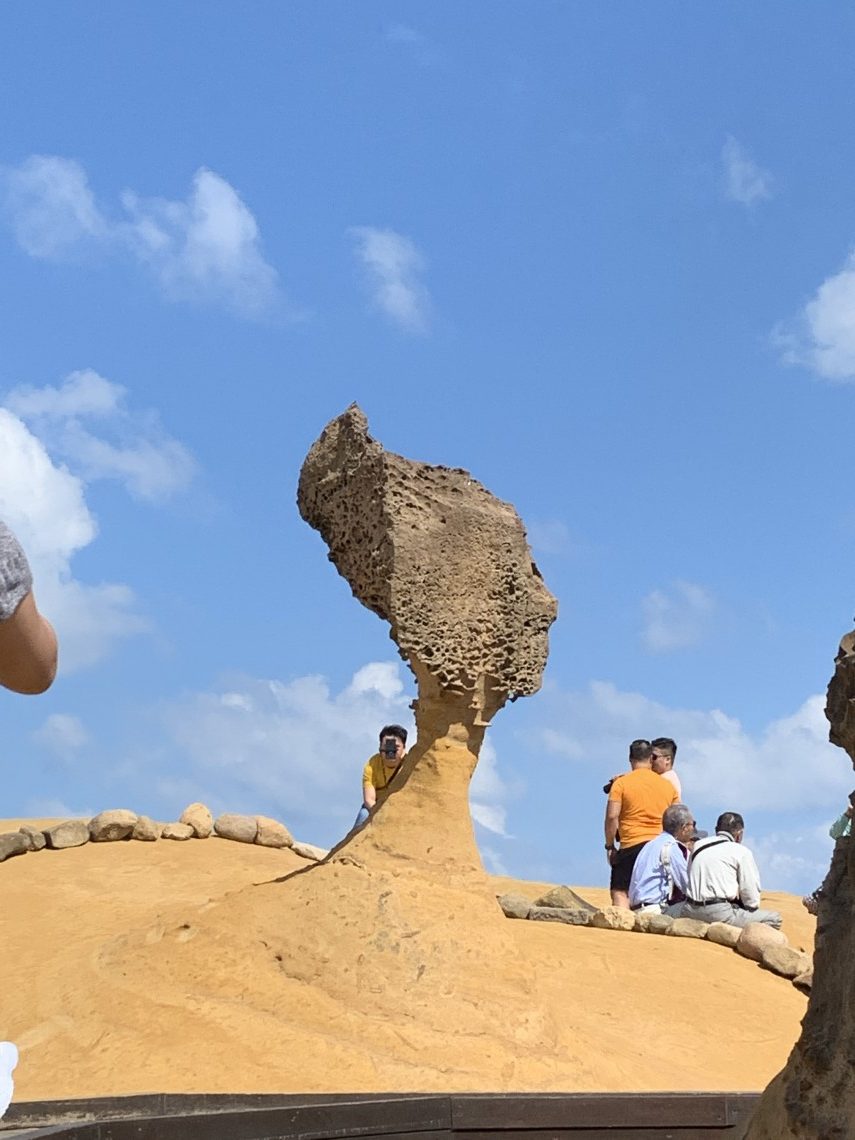 Here’s another view of The Queen’s Head. There’s only one real view that gives you the iconic angle people want. If you’re on the other side like the guy in yellow, you’ll also be in everyone’s photos and may get told off to move by eager people waiting in The Queen’s line.

The other angles allow you to take a picture of the rock, without waiting in a line, but they don’t really look like The Queen’s Head. 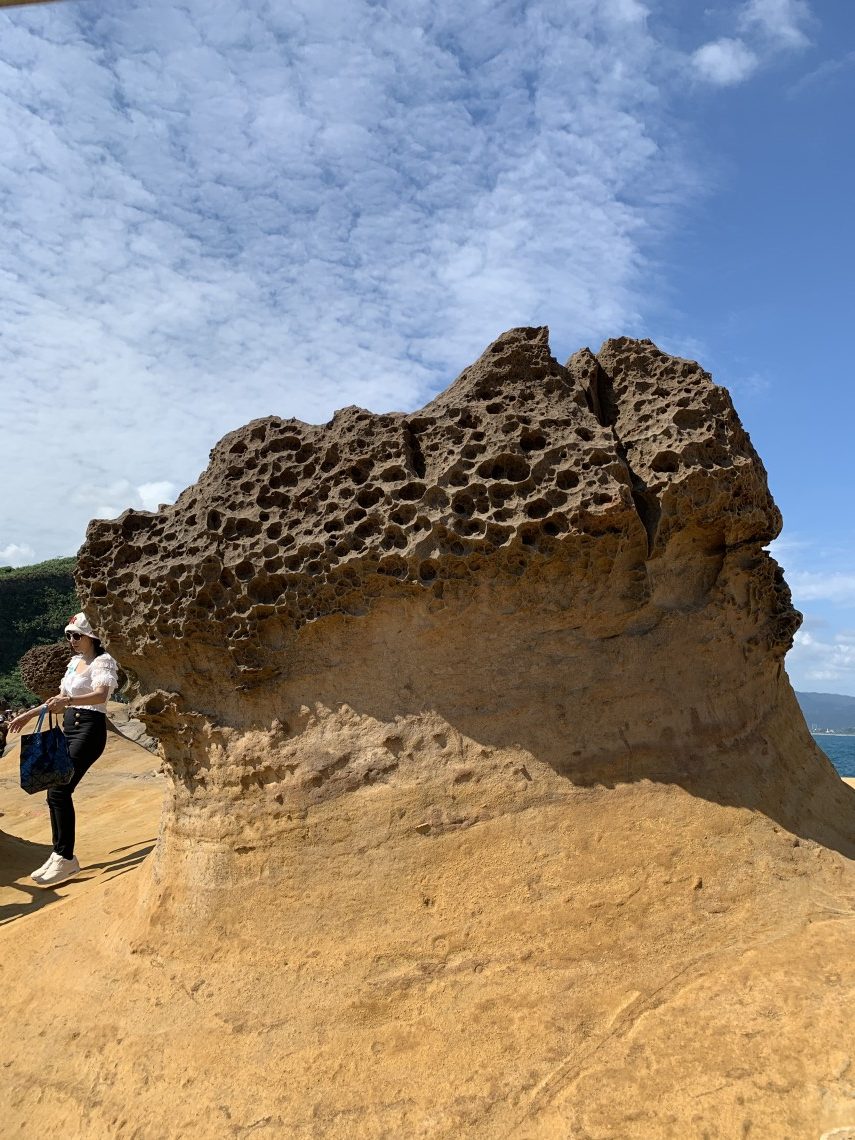 Due to erosion, many of these rocks pale in comparison to what they once looked like. They’re still cool to ogle at though. 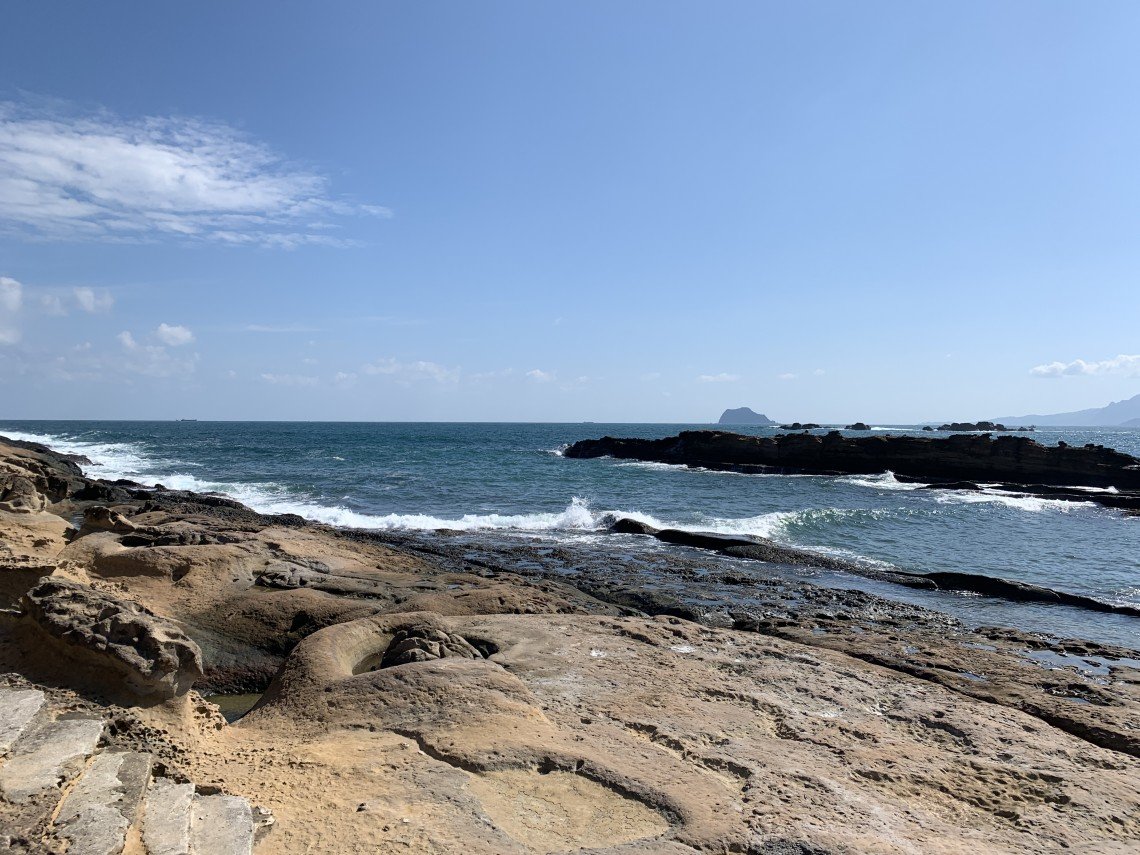 Here’s a view with Keelung Islet and Jiufen in the background.

This is a view looking westward towards Jinshan District (金山區 / jin shan ou).

After wandering around for around 40 minutes, the geopark was packed with people. Having had our fill of sights and sounds, we headed back to the bus. 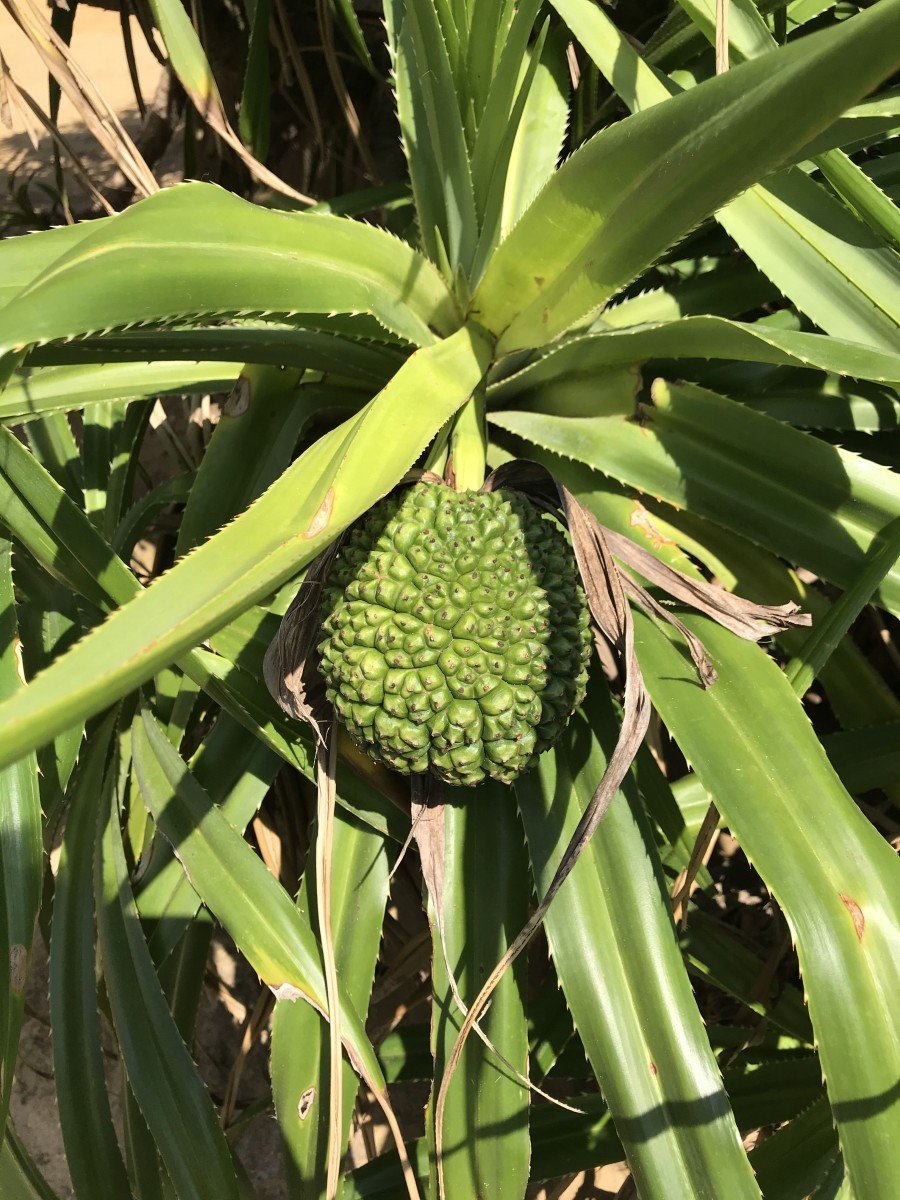 Along the way, we passed by a variety of plants that looked almost prehistoric. 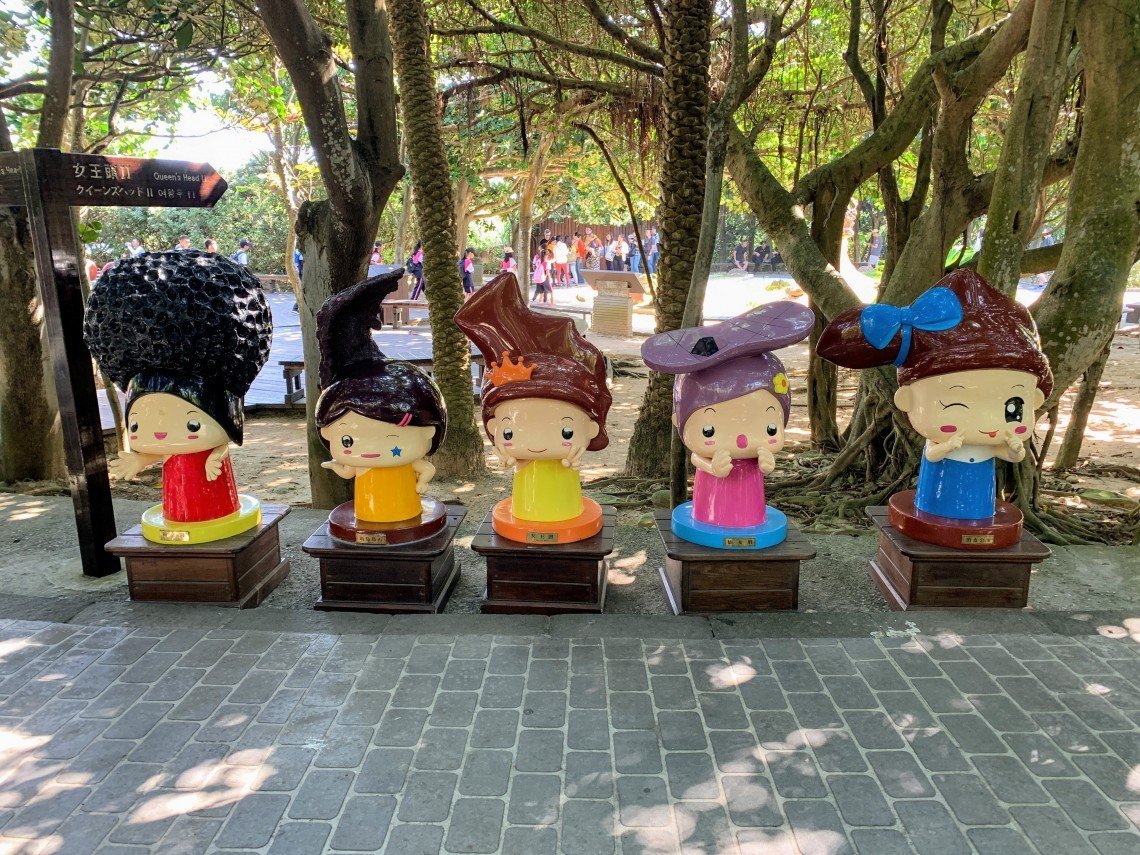 We also passed by these mascots. They feature the five prominent landmarks in the park. Can you identify any of them?

Right by the exit is a market with food should you get or be hungry. As we were headed to Shifen and Jiufen, we saved our appetite for amazing chicken wings (雞翅包飯 / ji chi bao fan).

Although we were only in the Yehliu Geopark for around 50 minutes, I feel like we did a lot. The formations are pretty cool to look at, especially if you enjoy science and looking at geological formations. If I were to do it all over again, I would try to arrive even earlier (before 10 am) and stay longer than an hour so that I could take a look more at the third section of the park. Having more time would also have allowed me to better see many of the formations that people have named.

If you go, here’s a list of formations to look out for:

Let me know which was your favorite!