When you think of a distillery tour, what comes to mind?

Probably large warehouses with the occasional wooden barrel scattered throughout?

Recently, I had the chance to check out Lost Spirits Distillery. Their distillery tour is unlike any I’ve ever been to and quick possibly unlike any out there.

Very simply, it’s as if Alice in Wonderland and Pirates of the Caribbean were scientists who decided to create a distillery.

To date, the Lost Spirits Distillery tour is the best alcohol-related tour I’ve been on and one that I would highly recommend if the above adjectives speak to you. The booze you sample along the way, no doubt, helps improve the experience, but I can imagine the tour being fun even for someone who doesn’t drink, who’s interested in the science of making liquor.

Because the tour is as much an experience as the spirits you taste, the rest of this post will contain spoilers about the experience. If you’re okay with spoilers, feel free to proceed. 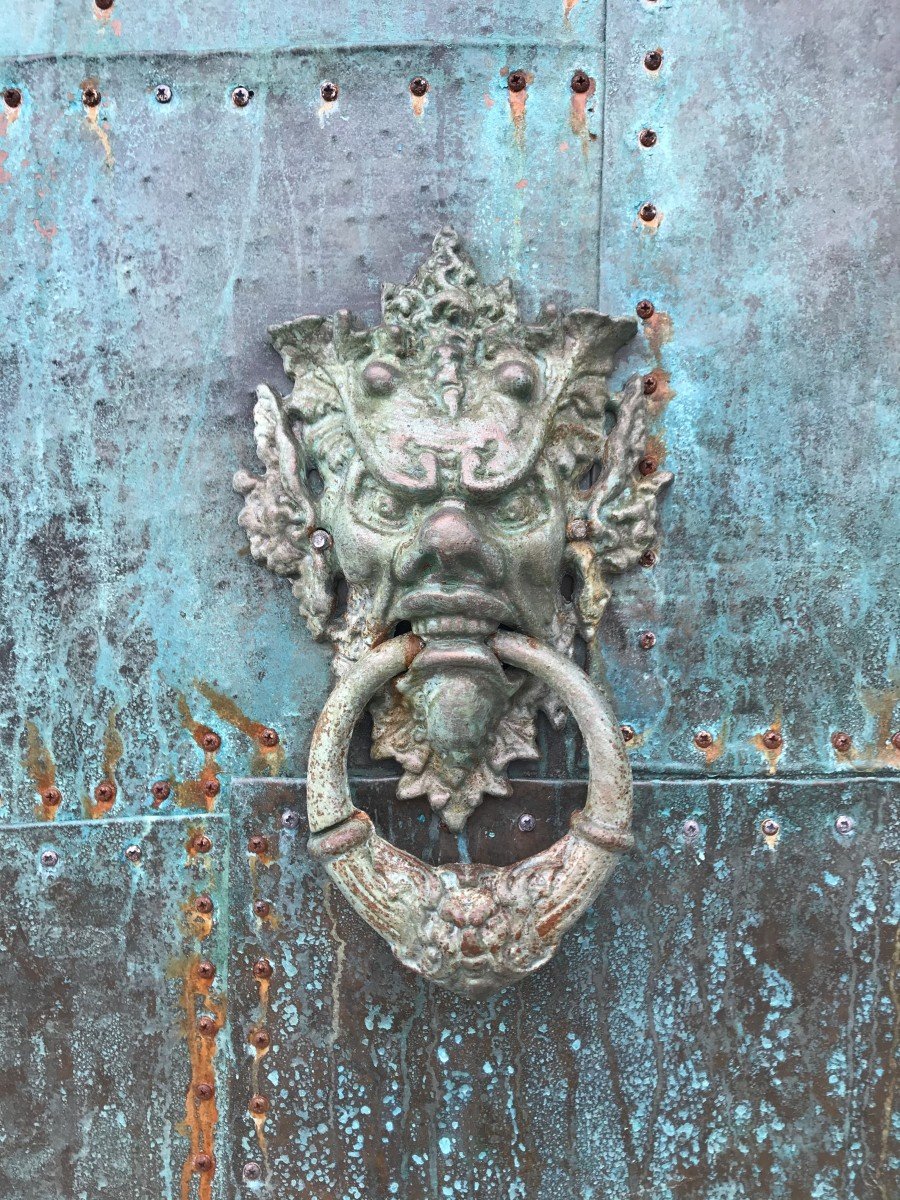 Right off the bat, in the middle of the Arts District in LA, the location where you’re supposed to meet up looks a little out of place. The above door looks like it had been taken from the depths of Atlantis, made out of the sides of shipwrecks.

Our rendezvous time was nearing, but no one was around to receive us. It didn’t dawn on me to try pushing the door, until another member of our tour group tried touching the door knocker.

Soon, we were inside of a lobby that looked a like a shady casino den within a castle. 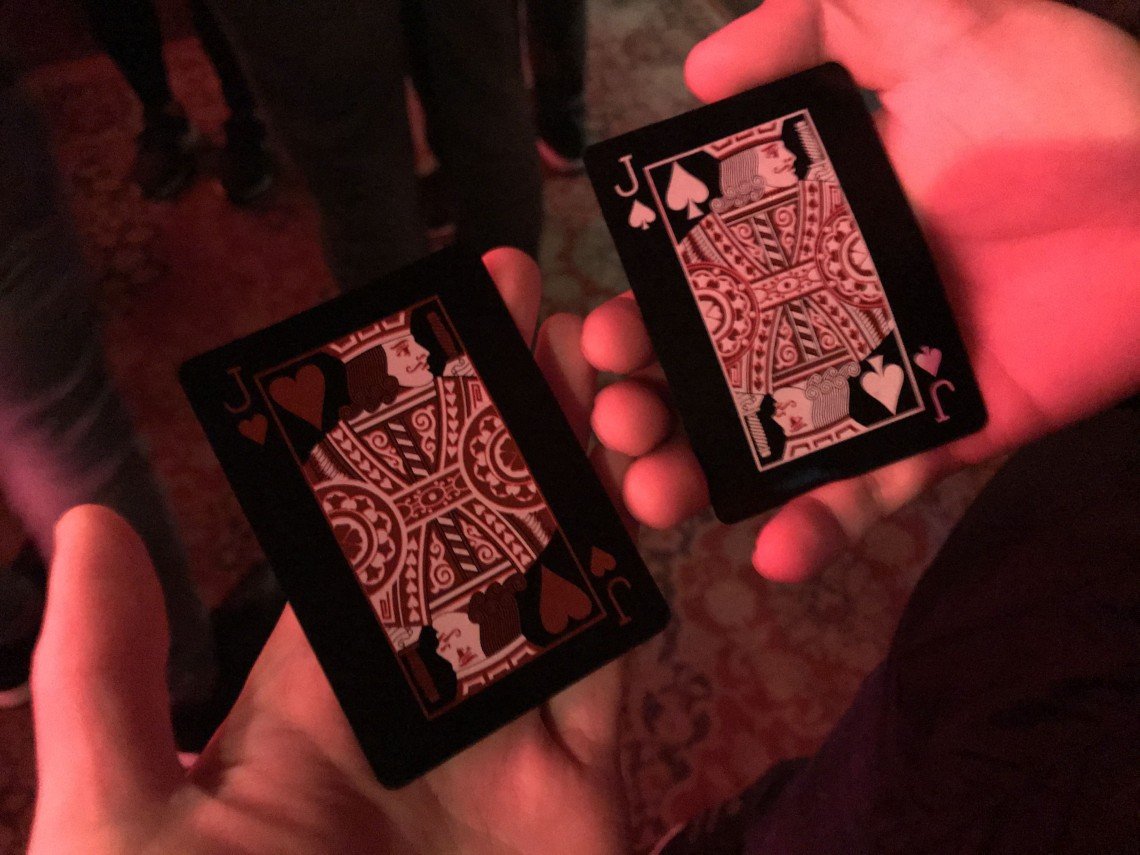 After checking in, we were handed these black poker cards that gave us safe passage into the tour.

Because the tour needs to be well-timed, people need to arrive on time or risk being left behind. Luckily, everyone from our group was accounted for, and our tour began.

Tip: use the restroom—better if you need to do #1 or #2 and not just wash your hands. 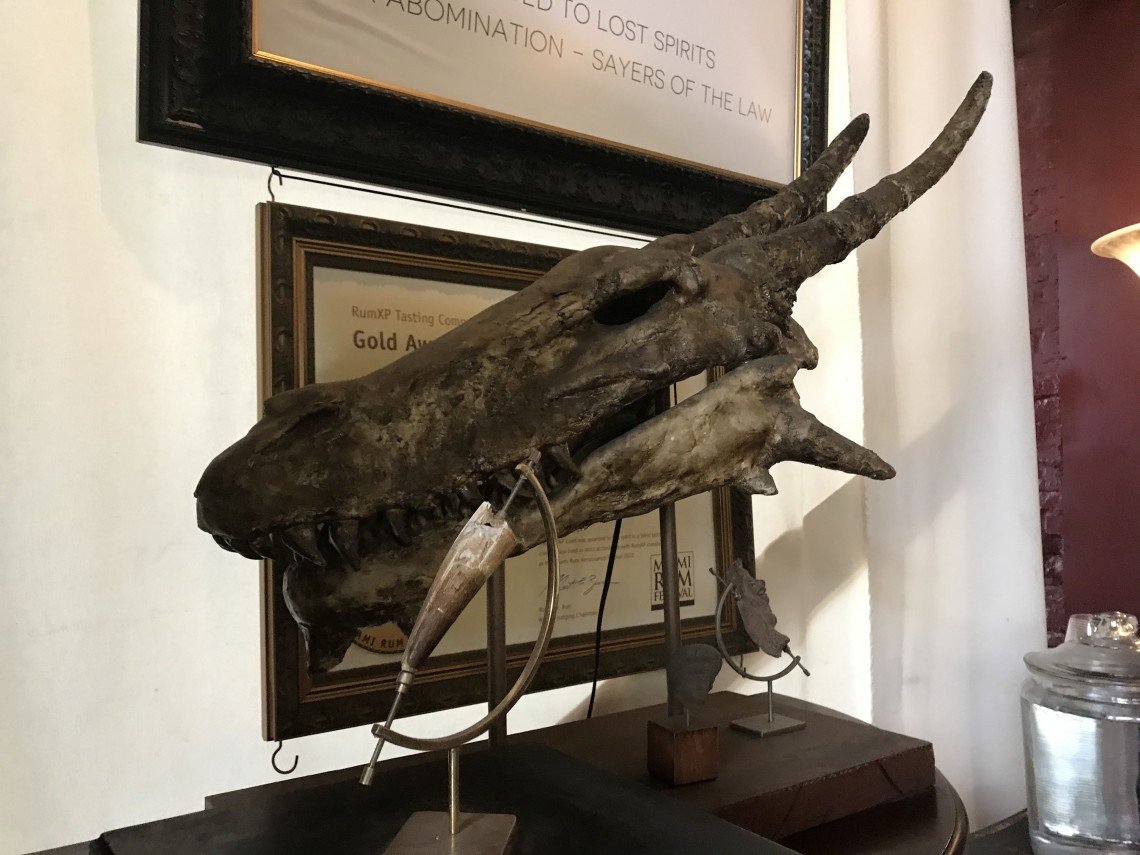 We were transported to what could have easily been Indiana Jones summer home in the Amazon, complete with oddities including this skull which reminded me of the Pokemon, Charizard. 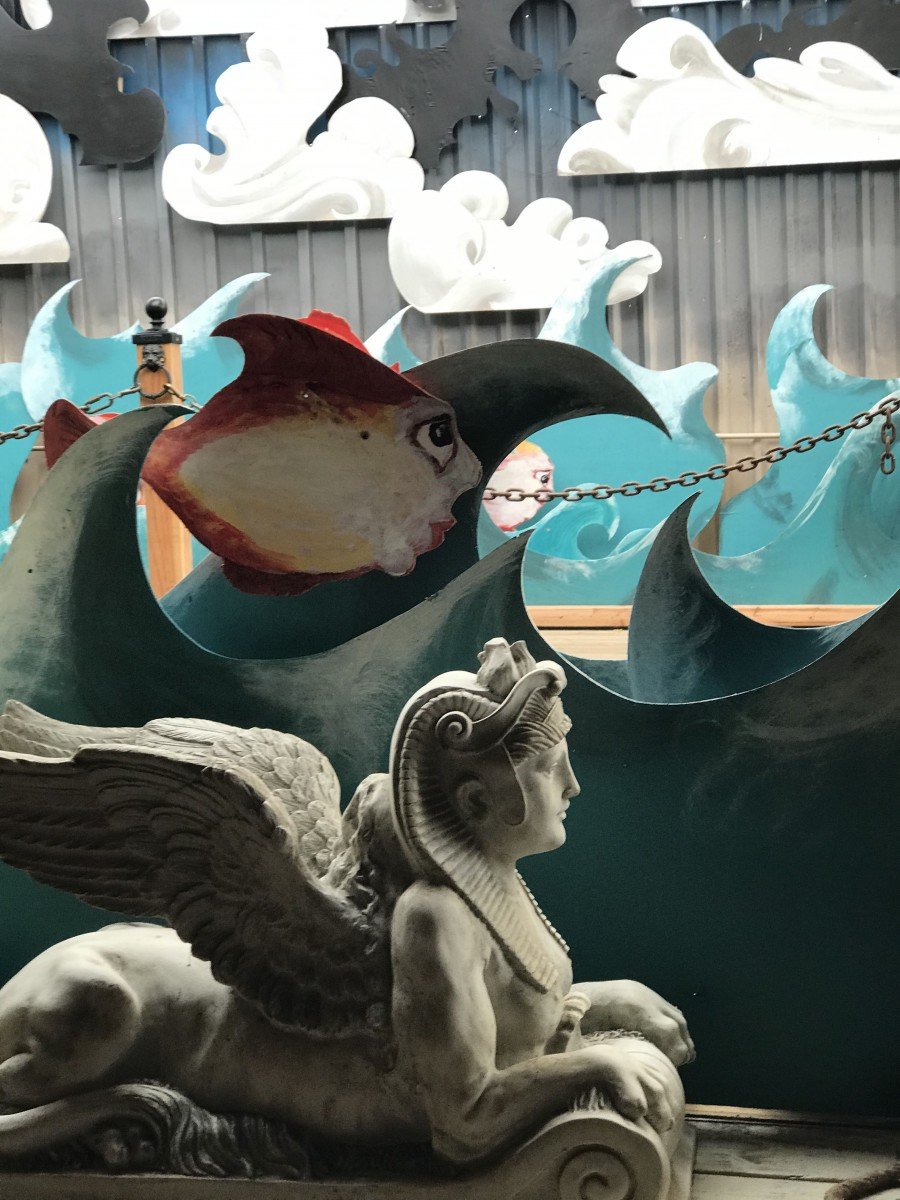 Here we sat in a mismatch of chairs to better understand how the tour was going to go and also receive our first samples—Carousel Brandy.

I’m not that much of a whiskey or brandy drinker, so the drink was quite strong for me, but I was able to note the complexity of the liquor.

After a brief rainstorm, we headed off into the maze. Guide-less, to find our next guide. 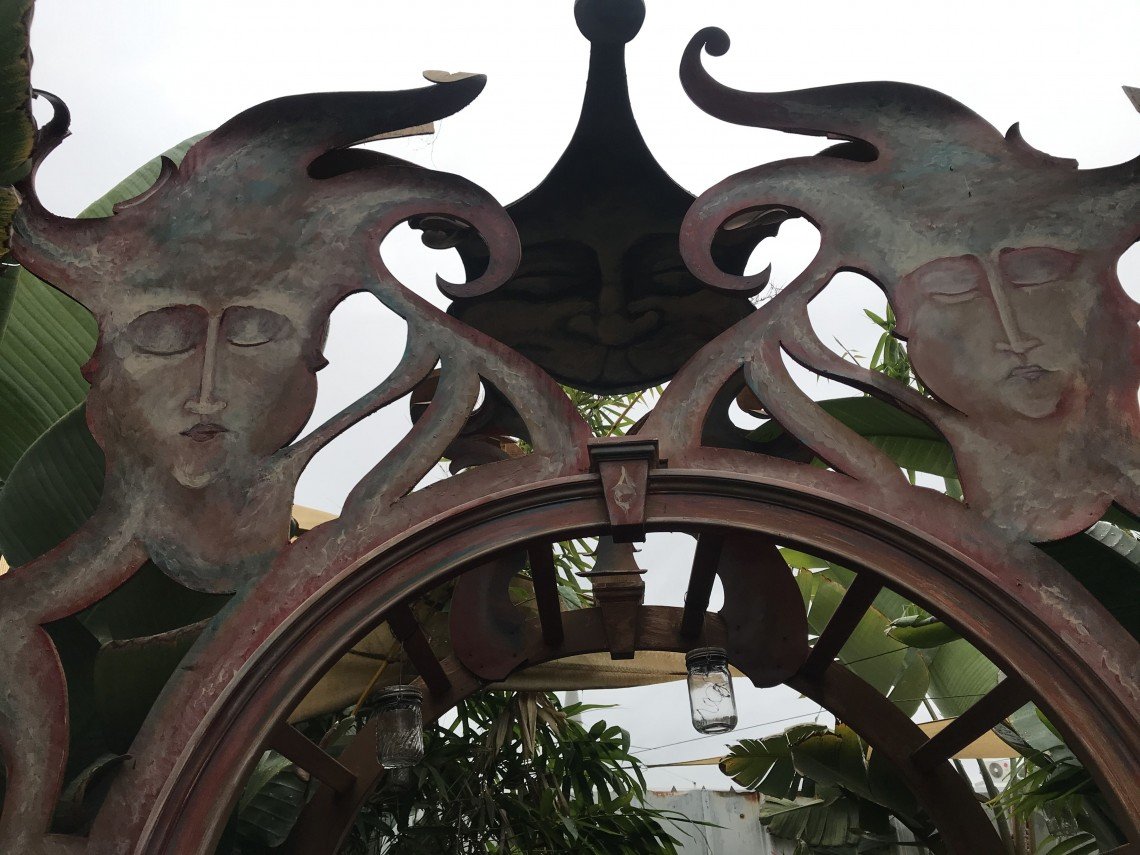 The maze was small but fun to walk through. Pots filled will palms, lanterns strung around, and Southeast Asian furniture, quickly took me out of Los Angeles and into this new world—complete with mildly creepy woodland creatures. 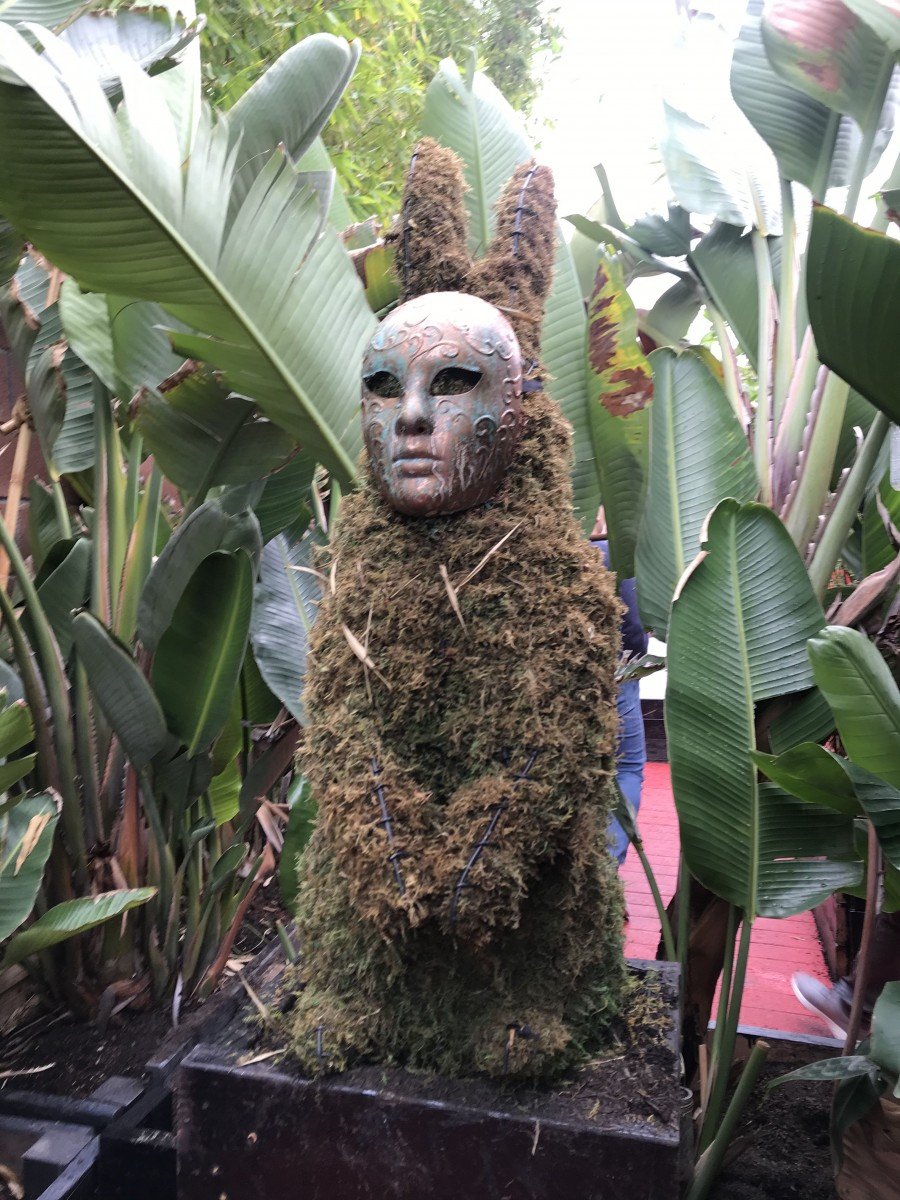 After find our way through the maze, we met our next guide—a bubbly young woman with short, orange hair. As we waited for our boat to arrive, she skillfully took us through some of the history of Lost Spirits Distillery and the science behind distillation.

Loving the science behind food, I found this part of the tour particularly interesting.

We carefully got on the boat and, Willy Wonka-style, rode the boat along the river through the tour grounds. After a short period of time, we arrived at the end of the river and disembarked where we met another guide, one who would take us on a Russian-style submarine to our next destination. 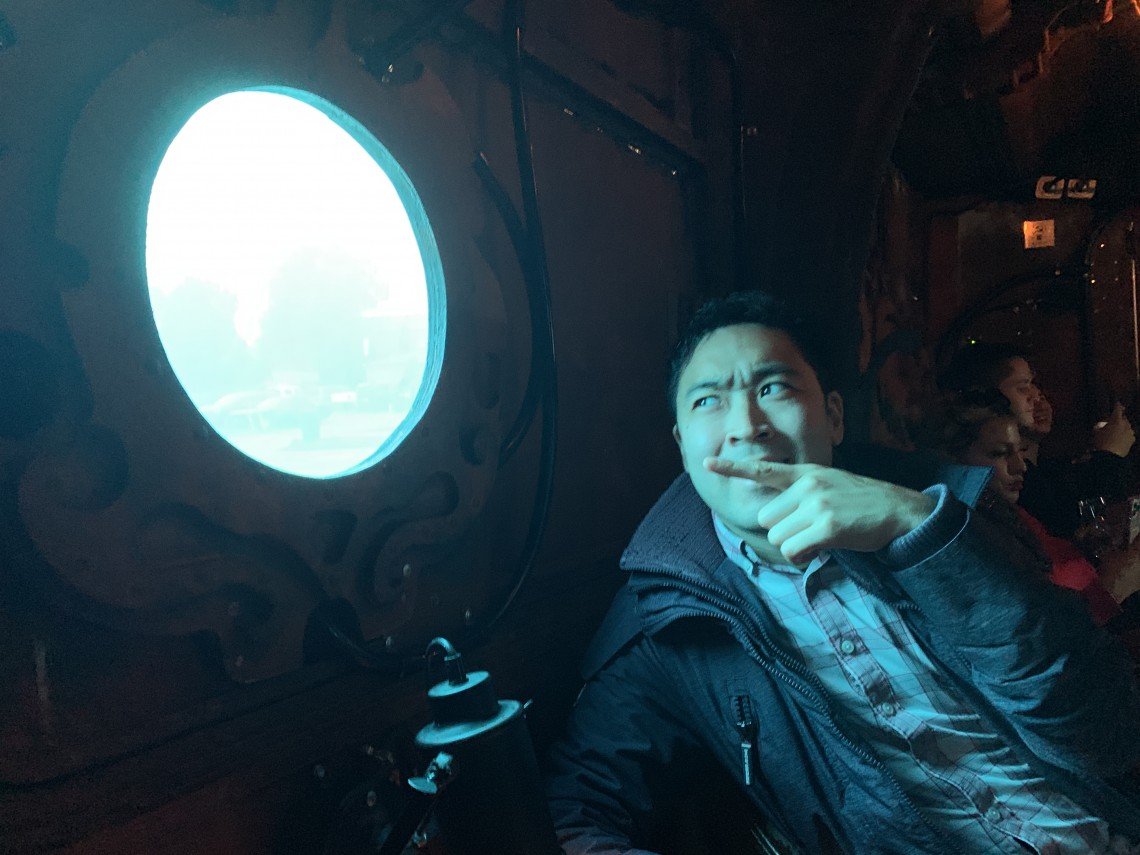 Though, admittedly we were on a bus on our way to the distillation factory, by all accounts of the imagination, we were on a submarine—diving into the depths of the 101.

We had another sample here, this time of Abomination (a peated malt). It was quite bizarre drinking while being driven somewhere. It felt much like being on a party bus, but without the music.

After breaching the surface, we entered the factory between two large shipping containers. Immediately we were transported to a colder, jungle-like environment. Large pieces of fabric hung from the ceiling, creating the look of walking through a rainforest at night.

It was here where we met our next guide who told us about the history and science of rum.

Once you get past the disgusting idea of a muck pit with all kinds of refuse being used in the production of flavorful rum, you begin to appreciate just how magical the process of making rum is. It was also here that we got to sample Lost Spirits Jamaican rum. 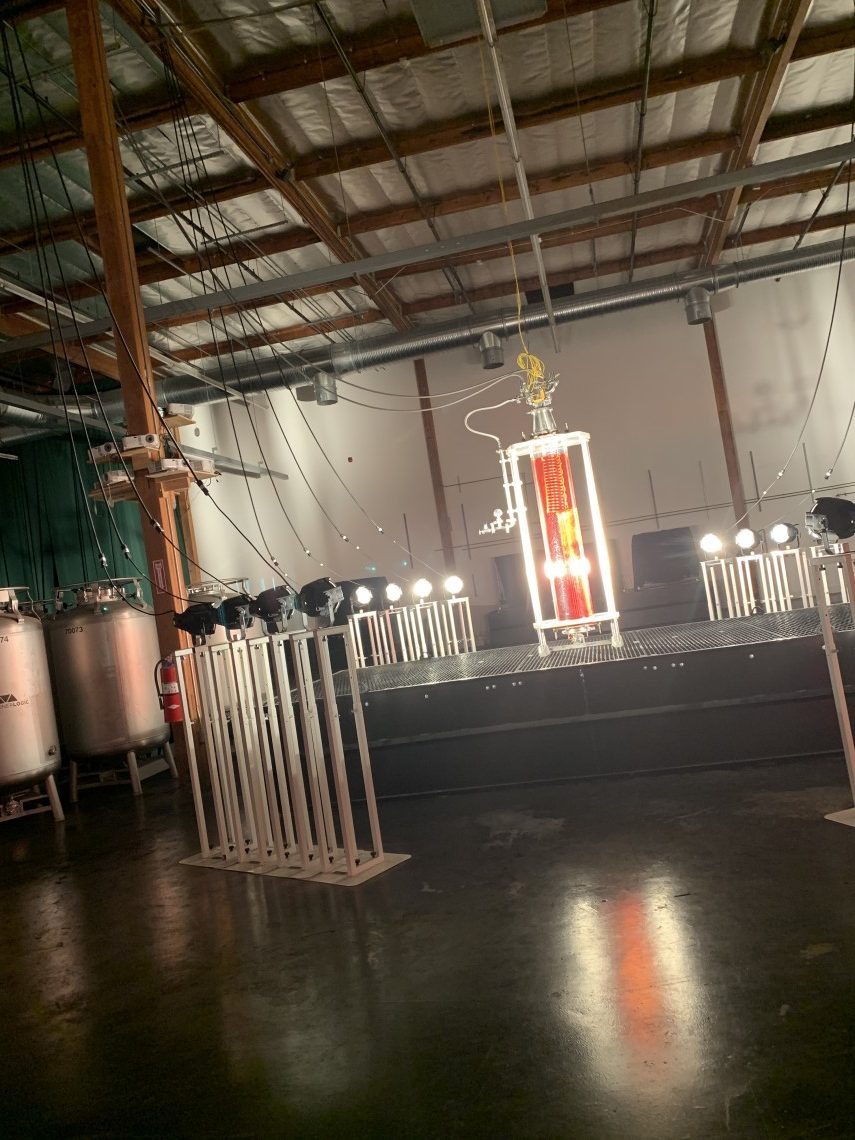 Like Charlie Bucket discovering the secret behind Fizzy Lifting Drinks, eventually we were shown the machine behind the madness of creating years old liquor in a weeks time. It was weird, it was dramatic, it was cool.

To wonder about how things are done and then to discover the simplicity behind the magic made the experience even more fun for me.

On the way out of the factory, we were shown one of the labs where future creations are being worked on. We were also taken to a gift shop where we could purchase any of the liquors we had tasted (as well as general merchandise).

Before arriving back at the front door of the tour, we had one more trip to make. We ended up catching an art-deco style bus and sampling the Navy-style rum. By this point, the Navy-style rum was just gravy on top of an amazing experience.

Despite the slightly higher than normal tasting price, the experience is well worth it.

Like a mad scientist, the people at Lost Spirits Distillery are always working on something new. I can’t wait to see what they’ll manage to revive from the past next.