In a quest to explore the many night markets around Taipei, I ventured to Raohe Night Market (饒河夜市 / rao he ye shi). Raohe Night Market is one of the oldest in Taipei. It sits right next to the Keelung River in Songshan District.

To get there, you can easily take the green line all the way east to Songshan Station (松山站 / song shan zhan).

This day, we walked from the blue line’s Yongchun Station (永春站 / yong chun zhan) after visiting the Yongchun Traditional Market and Wufenpu. The walk wasn’t too long and it was a nice way, overall, to experience more of the city. 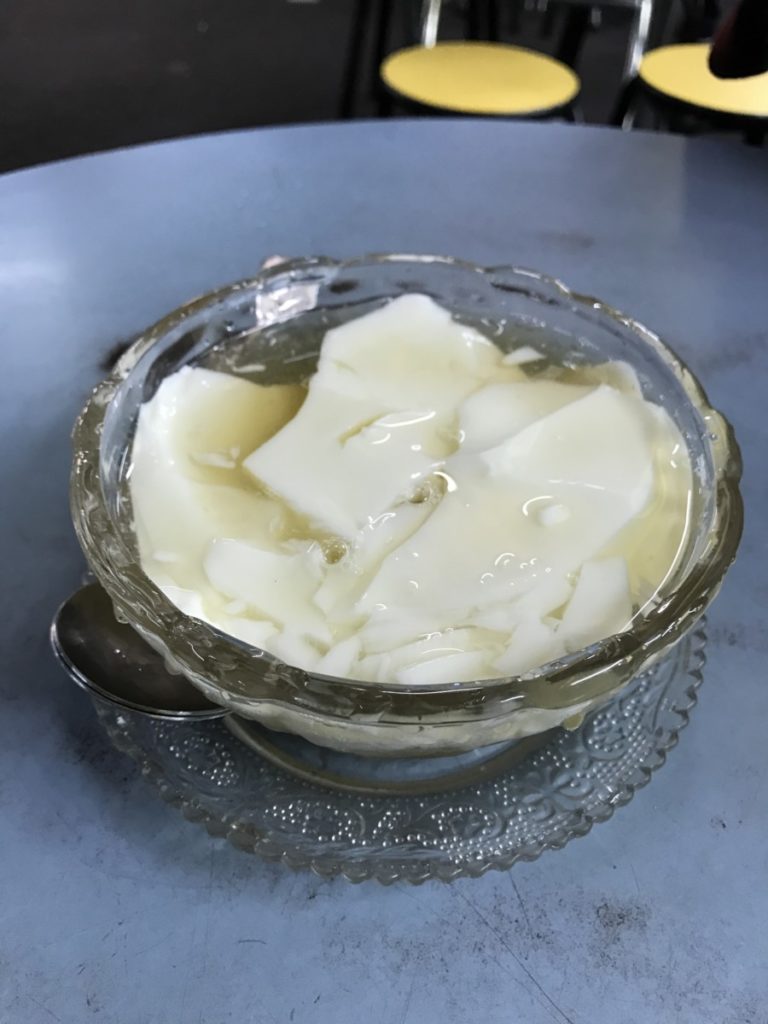 This was my first experience with the dessert. It was not overly sweet and somewhat reminded me of almond tofu. 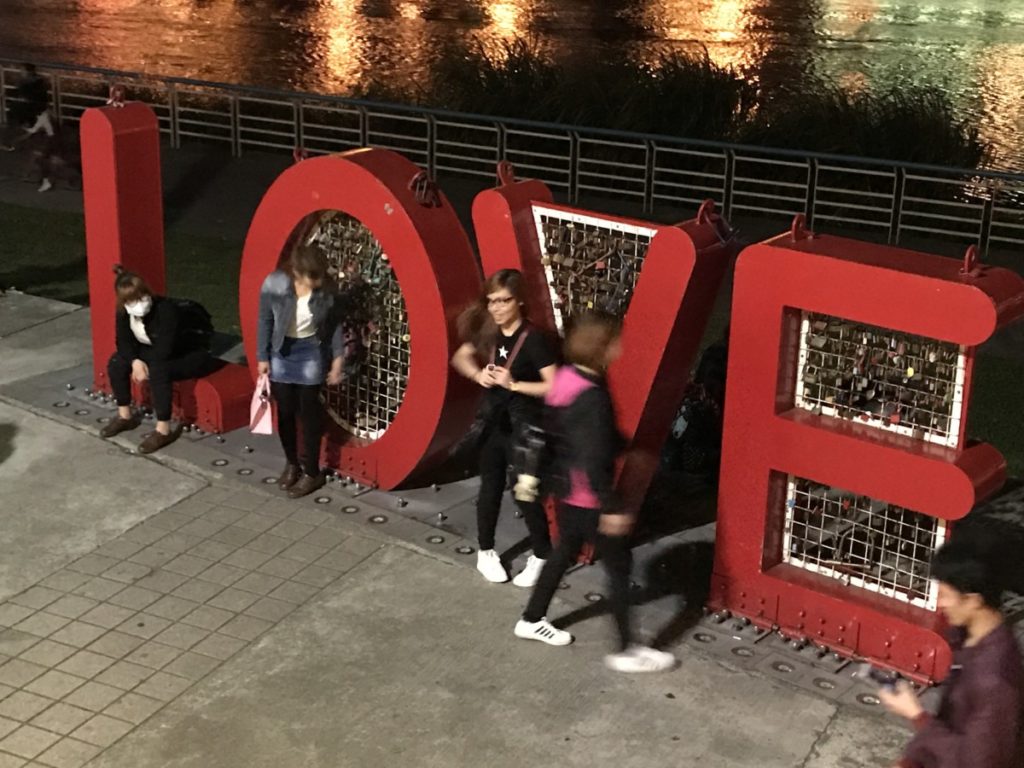 Walking along the same path, directly across from the main street the night market is on, we found ourselves at Rainbow Bridge (彩虹橋 / cai hong qiao). There was a large love sculpture with people adding their locks of love to it. 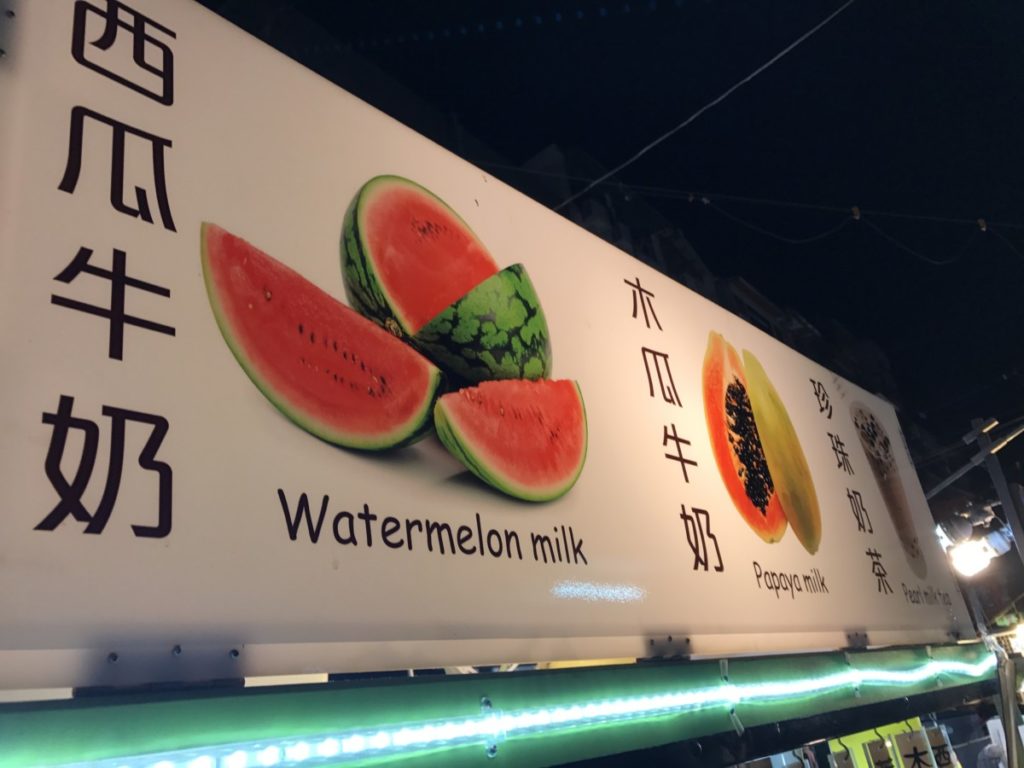 We went back into the main night market area to meet up with our party and ventured east towards the main entrance. Along the way I was introduced to Papaya Milk (木瓜牛奶 / mu gua niu nai).

It wasn’t a very good experience to say the least. If you see this sign, move on. There’s much better out there. 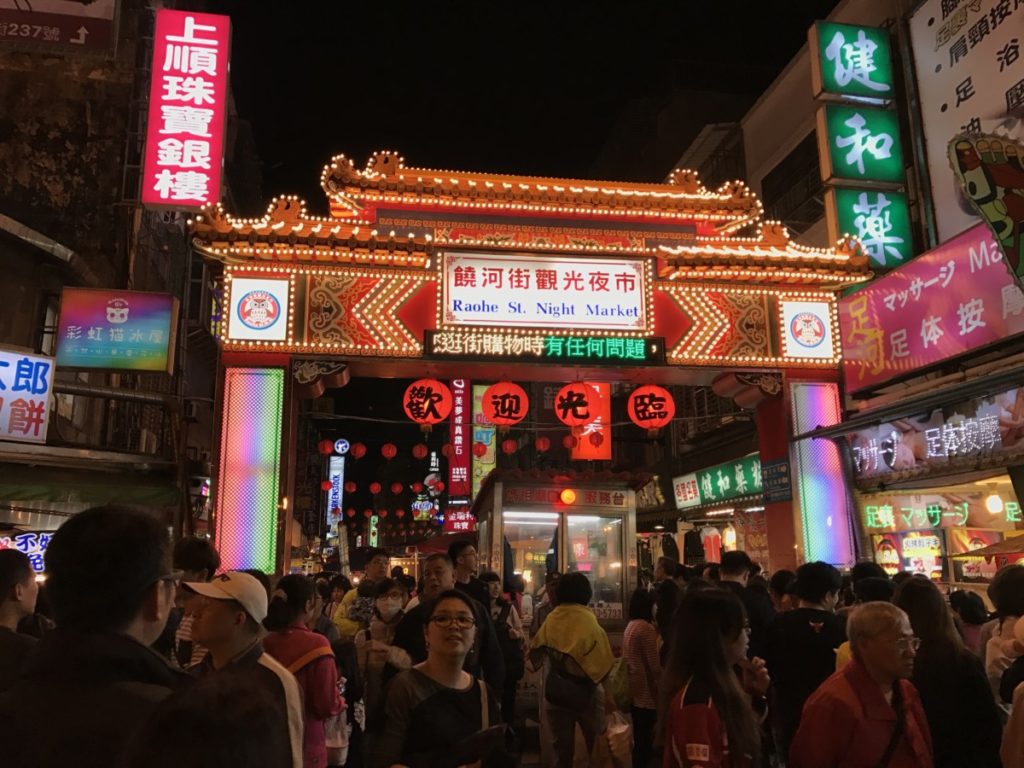 Moving around Raohe was quite difficult to do. Apparently we went during a holiday weekend which was to explain for the atypical influx of people. Waddling, we eventually made it to the main entrance of Raohe located near Songshan Ciyou Temple (松山慈祐宮 / song shan ci you gong).

To avoid the crowd and get something Raohe is known for, we stopped by Chen Dong (陳董- 藥燉排骨羊肉 / chen dong – yao dun pai gu yang rou) for some herbal pork bone broth goodness. 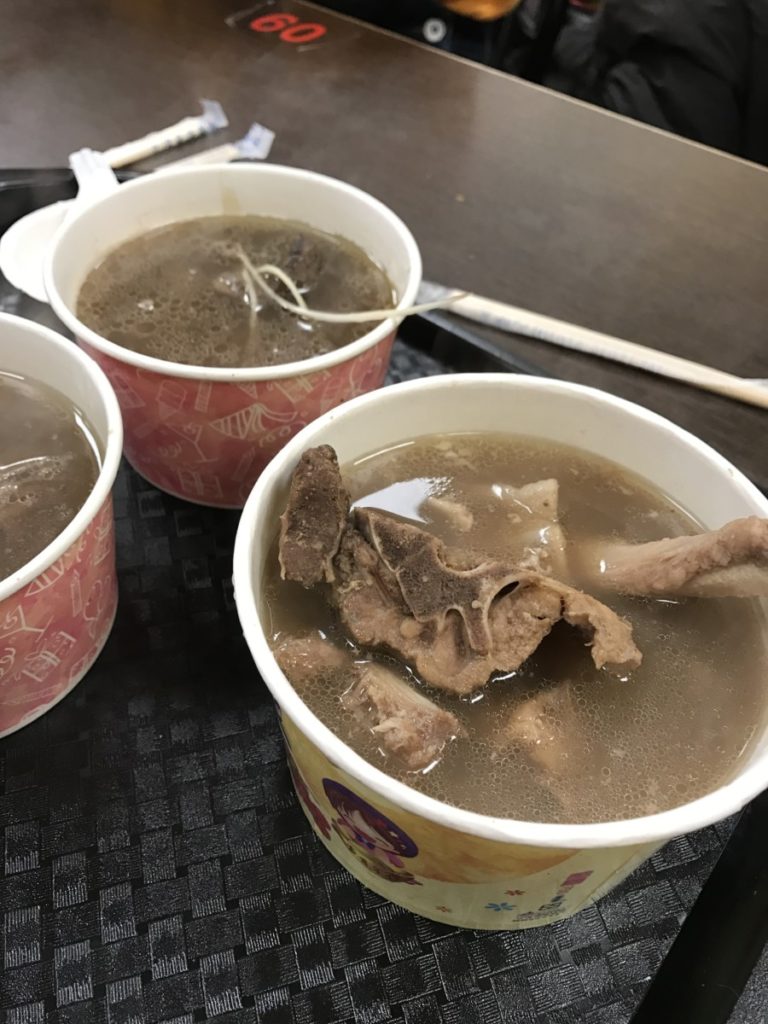 Having had our fill of herbal pork bone soup, we ventured out back into the crowd headed due west along Raohe Street. 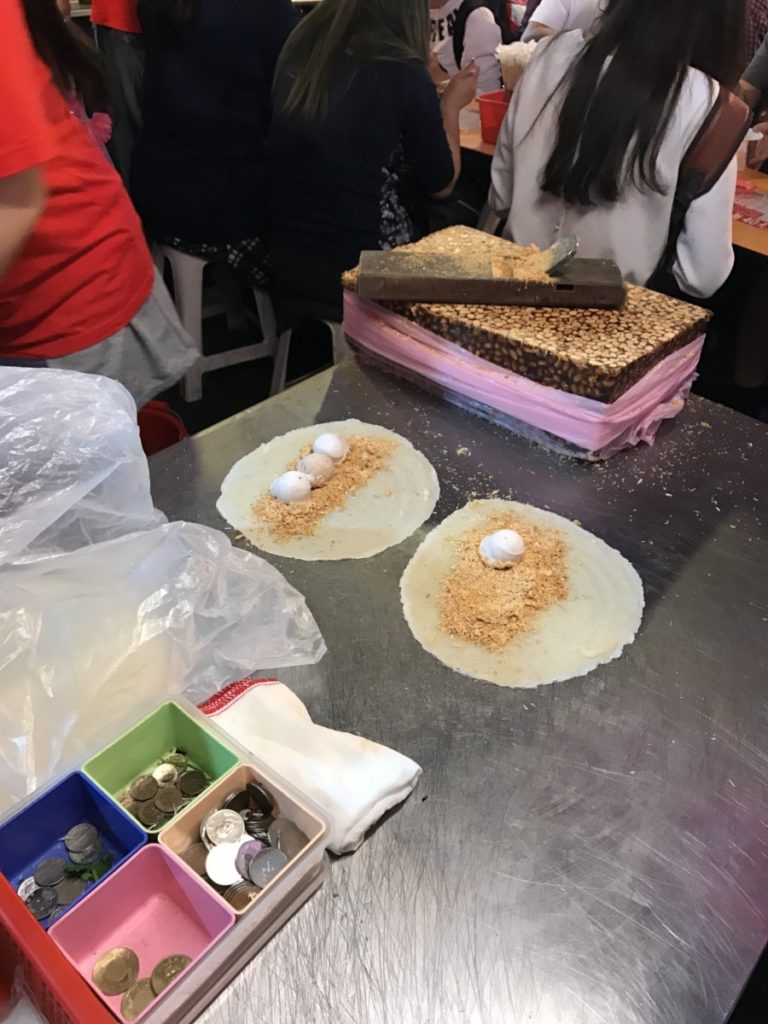 Along the way, we picked up some freshly shaved peanut ice cream rolls (花生捲冰淇淋 / hua sheng juan bing qi lin). These lacked the cilantro that the rolls had in Jiufen, but they were still yummy. They also included three types of ice cream which slightly changed the flavor as I finished the roll. 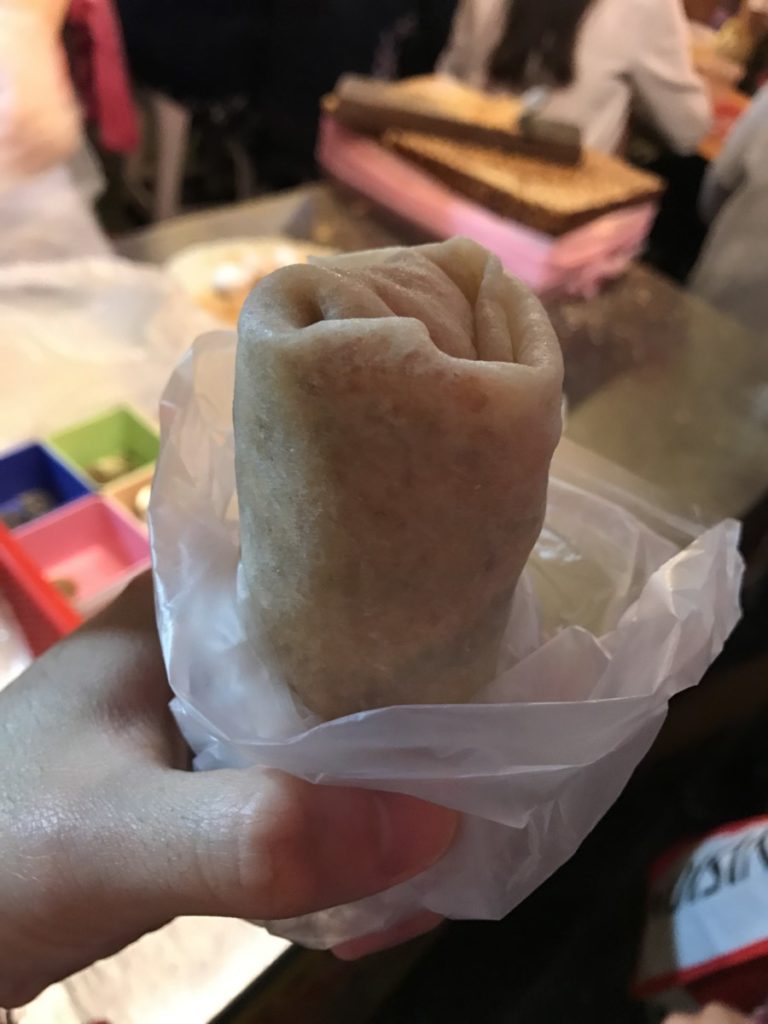 While exploring the shops at Raohe, we dropped by a stall to pick up this treat. It’s an egg cooked within a sweet, white batter (presumably made of egg). The place was called 巧手韓式蛋中蛋 (qiao shou han shi dan zhong dan). 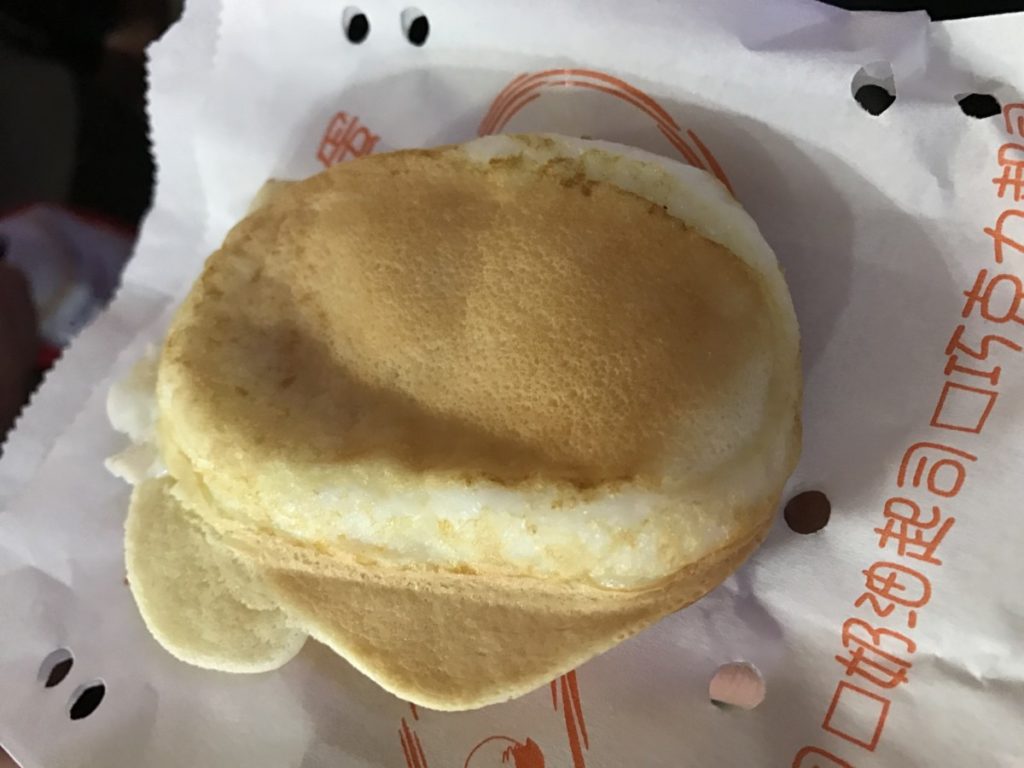 It had a nice sweetness to it and was like a fluffy pancake on the outside. 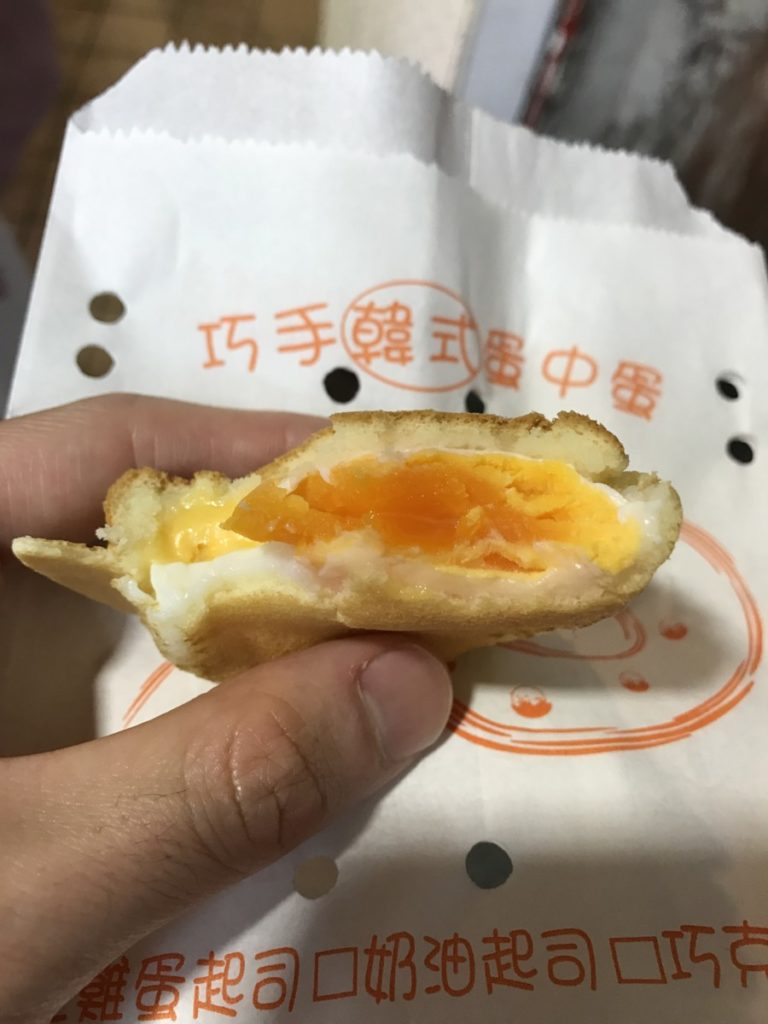 Eventually we got to the end of the night market where there were a bunch of mechanical rides, the kind that you might find outside of a grocery store. We got boba before we all headed back home.

As the second largest night market in Taipei, Raohe Night Market definitely felt smaller than Shilin Night Market. Still, it has a lot of unique eats and a feel that will have me coming back again—just on a less crowded day.