Past, Present, and Future – New York Itinerary: Day 3 of 4

By now, we had been to some of the top landmarks in New York City including the Empire State Building and Times Square.

On our third day in New York, we headed to New Jersey, of all places, to catch a boat to Ellis Island and the Statue of Liberty.

There are a couple of ways to get to the Statue of Liberty. We chose to go through New Jersey so that we could end with Lady Liberty and avoid some of the crowd that typically comes from New York City proper. To do this, we took Metro to the World Trade Center Transportation Hub.

From here, it was a short ride across the Hudson River to the Exchange Place PATH Station.

It’s possible to walk from this station to the cruise terminal in Liberty State Park, but as it was cold and wet, we elected to take a Lyft there. Walking it would takes about 30 minutes (including a ferry ride). By car, it was a cool 15 minutes before we had reached our destination. 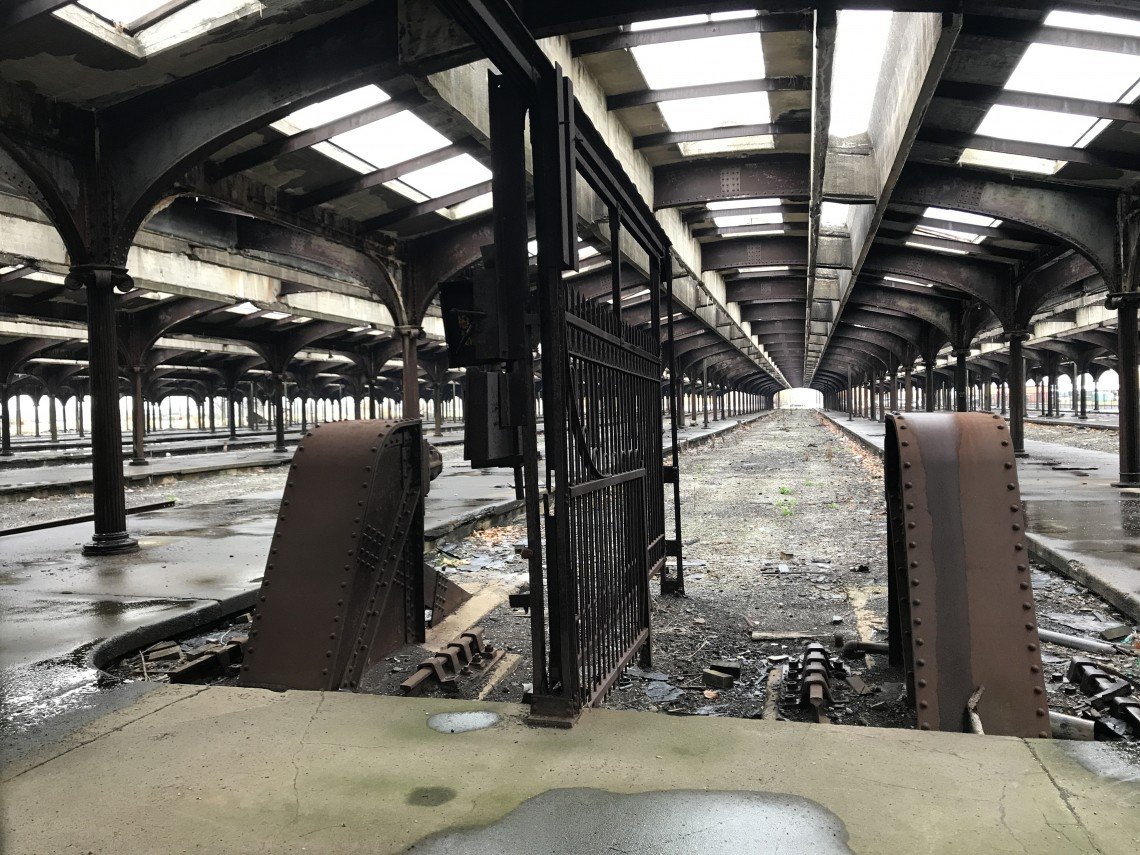 The cruise terminal is adjacent to the Central Railroad of New Jersey Terminal. This location was a functioning train station until it was replaced, renovated, and incorporated into Liberty State Park. Now the terminal stands as a reminder of the The Gilded Age, albeit a decrepit and slightly creepy one at that. Still, it was cool to walk by this station as we made our way to the Statue of Liberty ferry terminal on the very corner of the park. 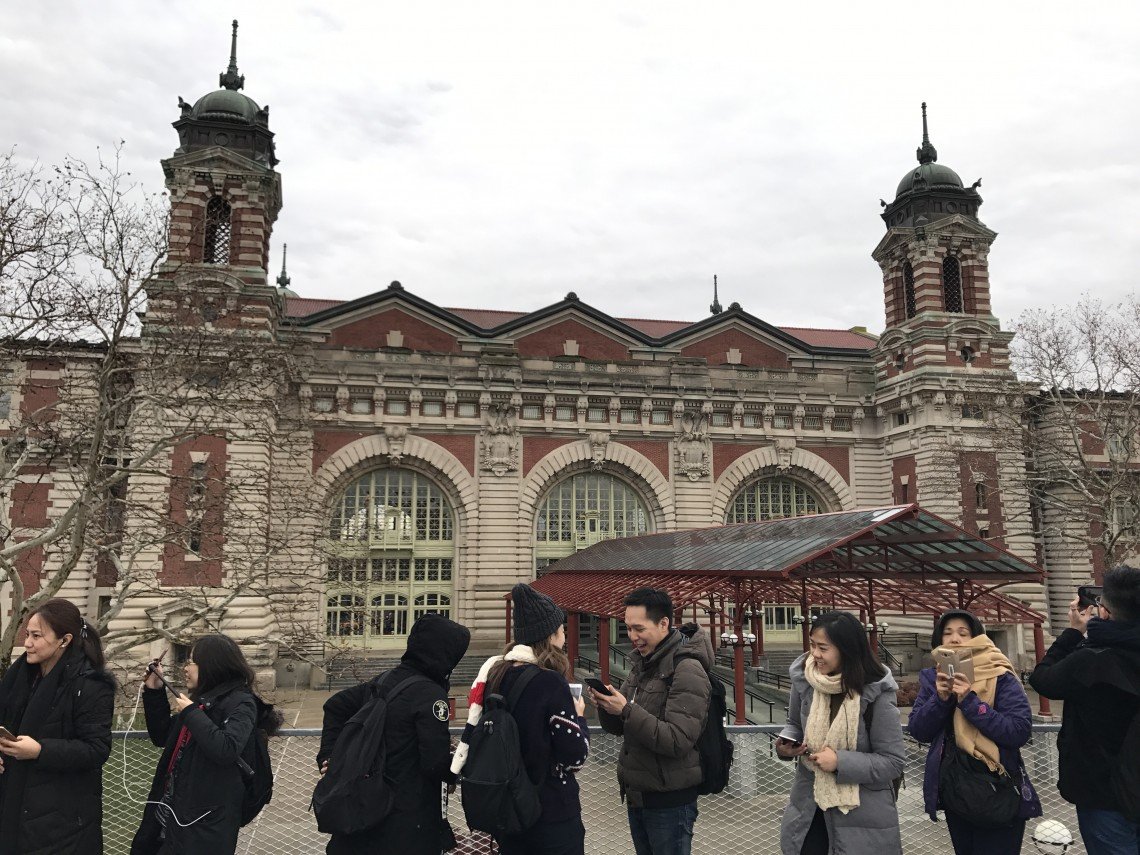 Because we first stopped at Ellis Island, we took time to wander the museum. The museum was a sobering journey through immigration and its impact on the United States. From one wave of migration to the next—the hardships they faced and the like—it was fascinating learning more about this history and the very real impact the island had on generations of Americans.

Fun fact: Ellis Island is both in New Jersey and New York. New York’s border encompasses the original island, while New Jersey includes everything that extended from this. 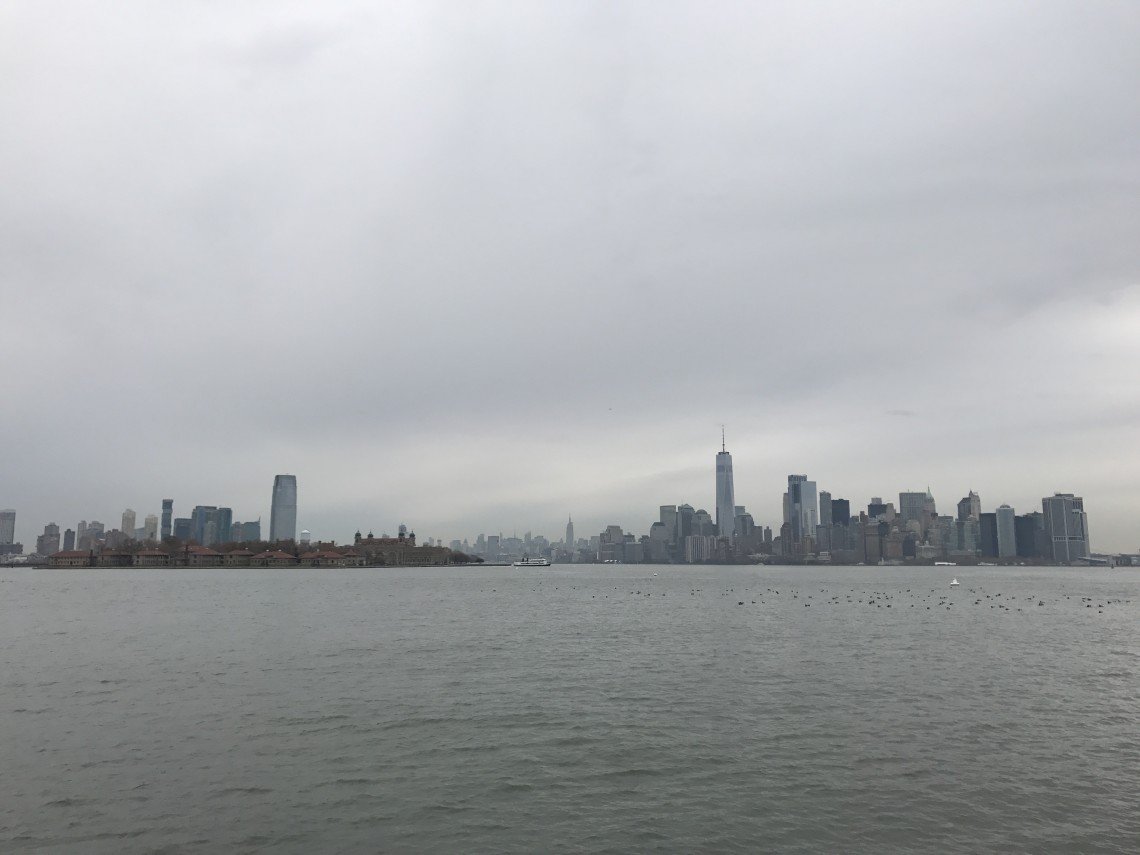 We waited outside for the next boat to pick us up. From here, we were taken to the Statue of Liberty. The distance between the New Jersey boat terminal, Ellis Island, and Statue of Liberty is about the same, but by the time we arrived at Lady Liberty, New York City looked so tiny.

The statue was a little smaller than I expected, but small spaces aside, it was fun learning more about the history of the famed monument. It was also cool being able to walk up to the pedestal and look out at the surrounding area.

After a little over and hour, we were ready to take the New York ferry back to The City.

Our ferry boat dropped us off at Battery Park on the south end of Manhattan Island. From here, it was a short walk to checkout the Charging Bull, the Fearless Girl, and New York Stock Exchange. 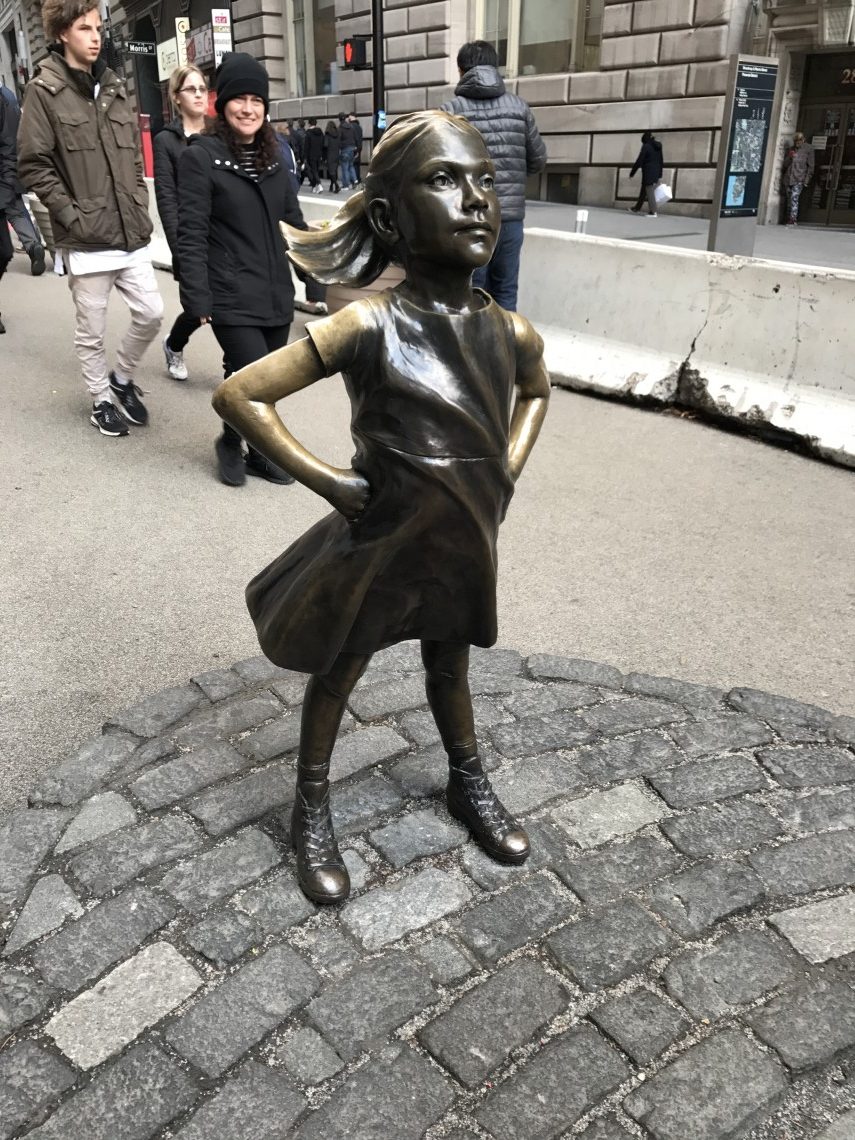 Seeing the statue of the fearless girl was surprisingly more inspiring than I thought it would be. It conjured up thoughts of a future where equality for all and respect for the environment reign supreme. What such fearlessness will achieve in the future, one can only imagine. 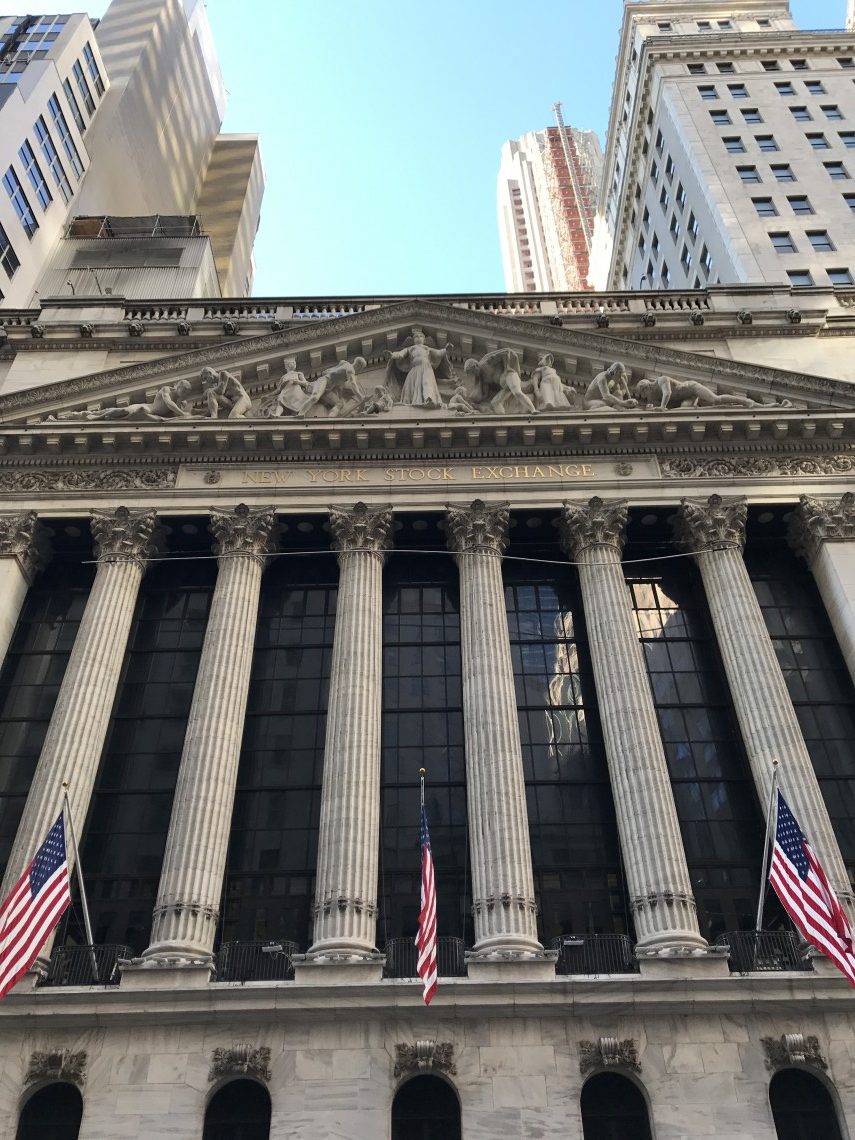 Where most of the buildings surrounding city hall stretch into the sky, City Hall recalls of a time when there was more greenery, when buildings a few stories tall at max. New York City Hall reminded me of an island situated in a sea of concrete.

The Brooklyn Bridge is iconic New York City. It crosses the East River connecting Manhattan with Brooklyn. In addition to being a city landmark, it is the world’s first steel-wire suspension bridge.

Many people like using this bridge for photos and recreational purposes (biking). As a result, it may be hard to get that perfect photo without other people in it. If you’re looking for that perfect photo, my recommendation would be to arrive earlier in the morning when there are fewer tourists out and about.

By now it was around 3 PM. We got a late lunch and met up with friends for an escape room at Mission Escape Games in Chinatown. After escaping, we wandered about town with a local friend. 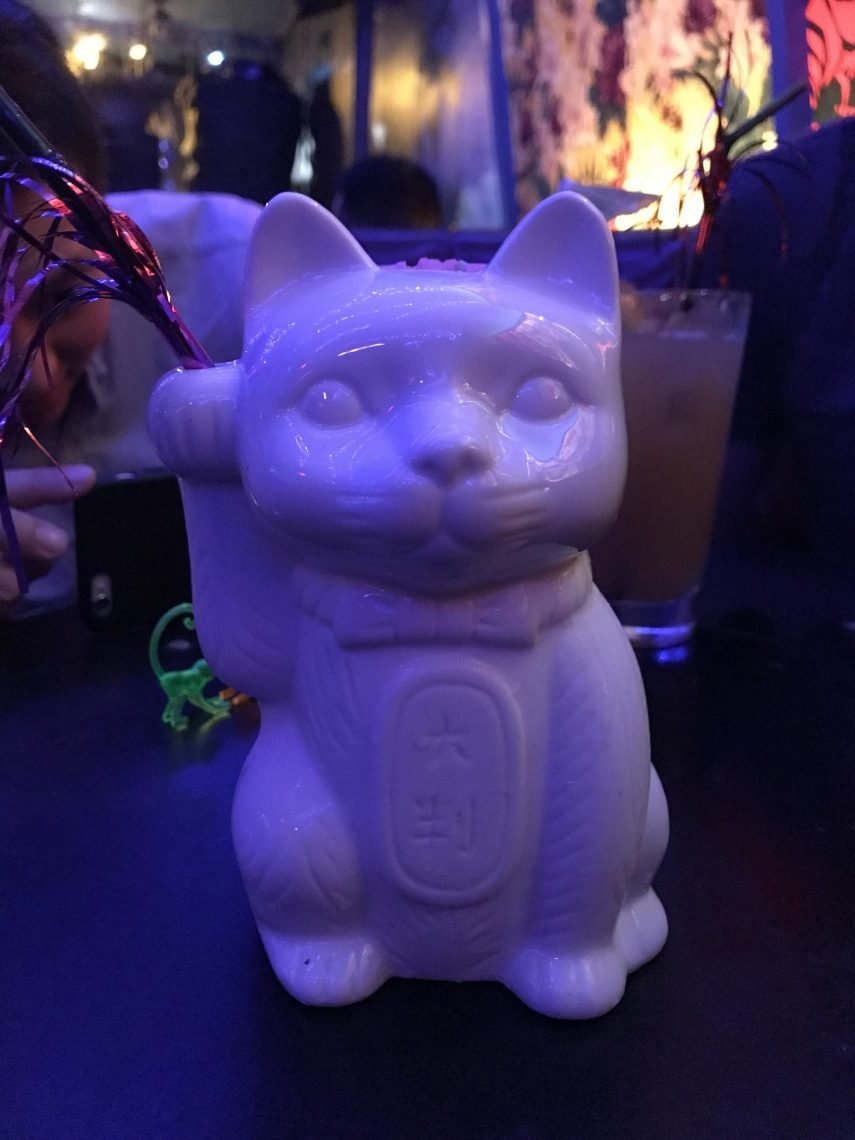 To cap off the night, we dropped by Otto’s Shrunken Head, a local tiki bar, for some fun drinks. Despite all the problems with tiki culture and appropriation, I’m a sucker for the random assemblage of tropical kitsch. I brought back this mug that was filled with a tasty drink, omakase-style. The drink was called Pinky’s Potion and featured a random drink that the bartender made.

Along with friends, it was the perfect way to end the day.