Getting my Bearings – New York Itinerary: Day 1 of 4

After exploring Philadelphia, it was a quick bus ride into The Big Apple. We arrived in the evening, so we didn’t do much except catch up with friends.

Adventures would have to wait until the morning.

As we were staying in Queens across the East River, we woke up to the stunning sight of Manhattan Island.

I was surprised at just how distinct the New York skyline looked.

After getting ready for the day, we walked to our nearby New York City Subway station to pick up the subway train headed towards Rockefeller Center.

Contrary to how things looked above ground, the Metropolitan Transportation Authority (MTA) station was abuzz with passengers of all backgrounds and ages scurrying around. As it was a Monday, without actually realizing it, we were joining many passengers for their morning commute into Manhattan. Even though the subway train was packed with people, it didn’t take very long at all for us to make it to our stop.

Soon enough we had arrived at  and were above ground.

I’m not a huge Christmas fan, but the holiday decor in and around Rockefeller New York quickly got me in the holiday spirit.

From the giant Christmas tree to the skating rink, there wasn’t a part of the center that seemed untouched by holiday glee. There were huge nutcrackers, angels, snowflakes, and poinsettias as far as I could see—marking a stark contrast to the concrete everywhere.

It was everything I had seen in the movies and more.

After walking around the skating rink, we stopped by The LEGO Store and Nintendo NY. As a Nintendo fan, myself, it was so fun to walk around and discover way too many things to buy.

From Rockefeller Center, we walked a quick 10 minutes to Grand Central Terminal.

As a functional commuter rail terminal with a grandiose architectural presence, Grand Central was alive with activity. Due to the sheer immensity of the space and fact that people were getting about their daily commutes, it felt a bit like I was intruding on something sacred when I entered.

Looking at the Grand Central Terminal ceiling, I noticed the constellations painted on it as well as the holes that let sun shine through. The ceiling itself, has a storied history, including one of erroneous painting and meticulous cleanings.

Though much of the station lives in the present day, there are still elements of days gone by. In particular, it was fun seeing the analog destination boards. They didn’t move when I was watching, but I could just imagine the destinations changing and the mechanical ticking sounds as the panels moved to show the correct destinations and arrival times.

These boards are soon being replaced with digital ones, though sadly.

After wandering the food court and not finding anything that we wanted to eat, we dropped into the New York Transit Museum Gallery Annex & Store to check out the miniatures. This small museum did not disappoint. 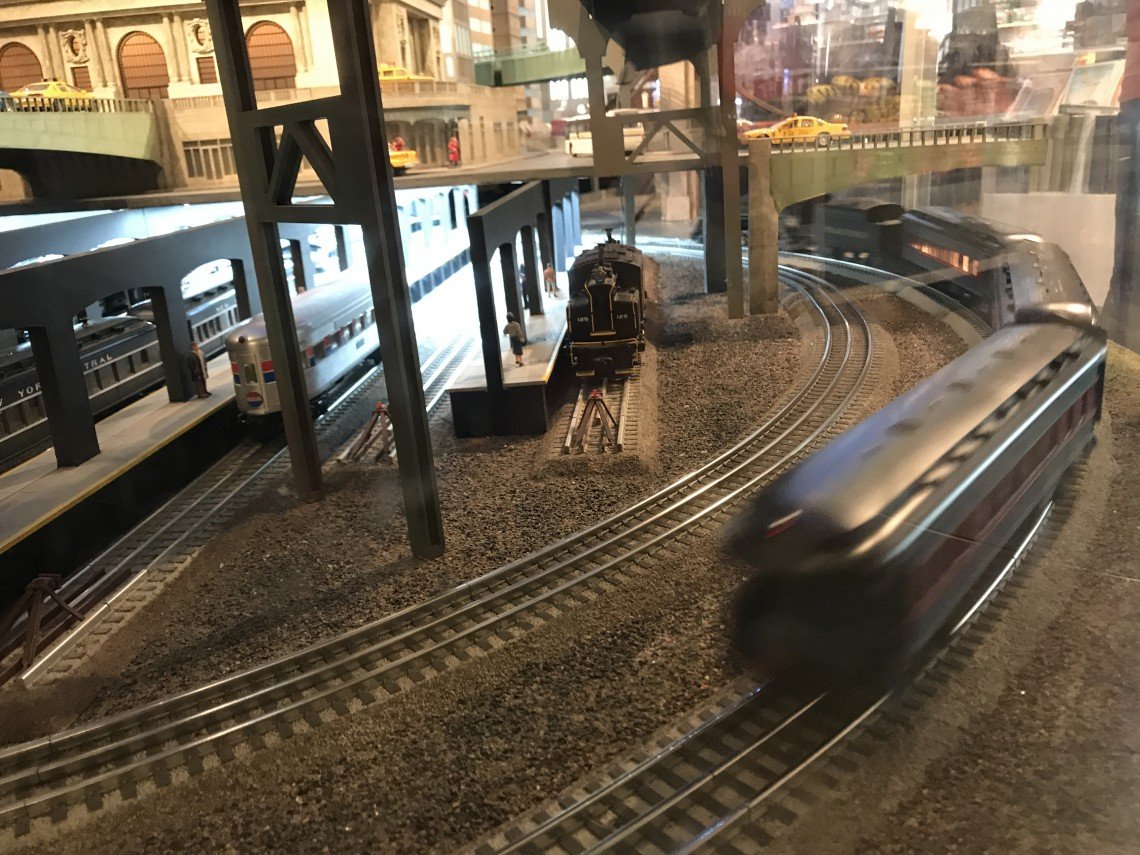 Viewing the tiny trains felt like being transported to decades back in time. 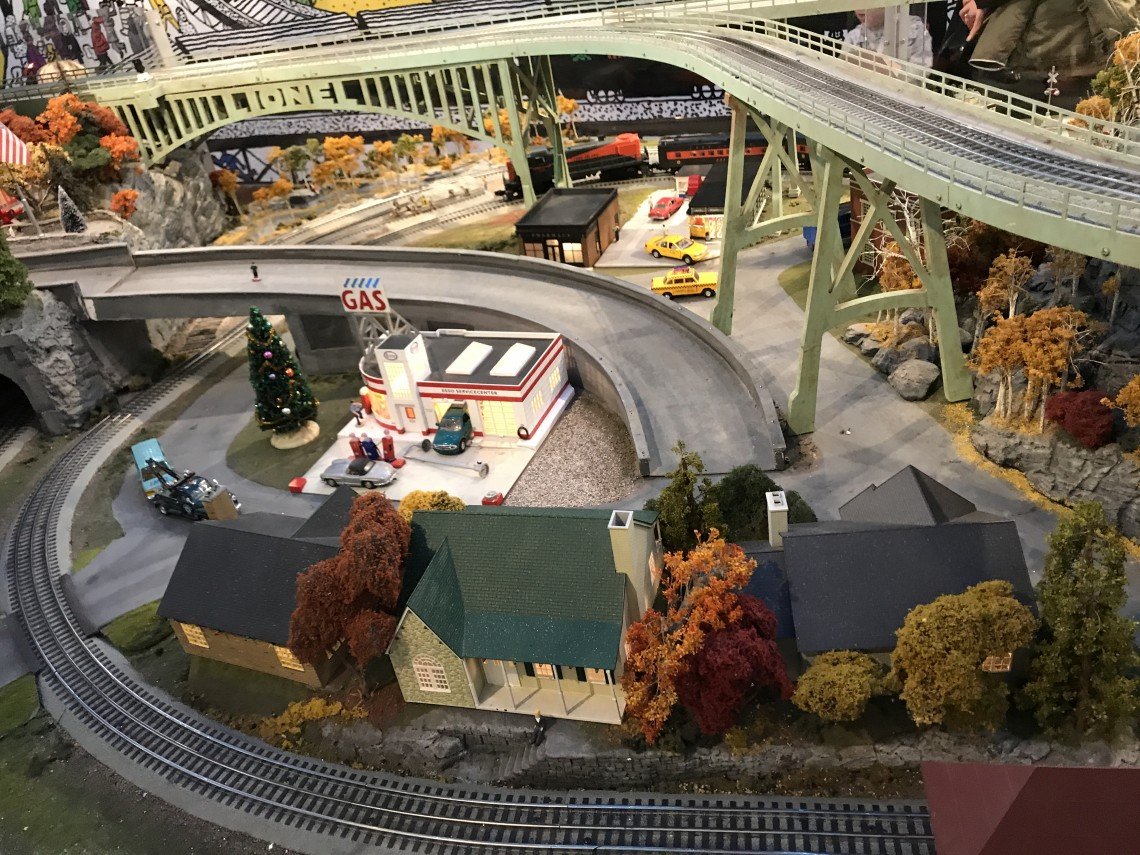 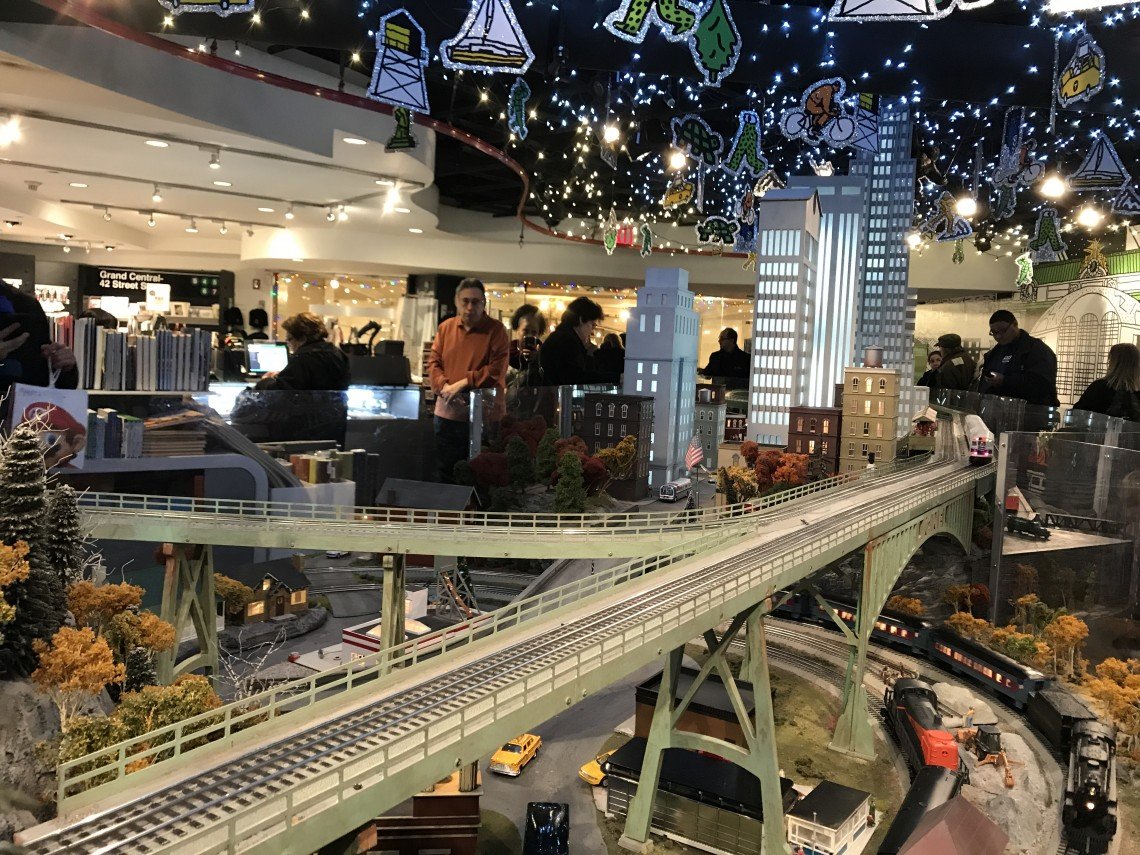 Though small, and a subset of the larger New York Transit Museum, it was a fun way to learn more about the local transit system and the role it plays in New York.

As it was almost 2 PM, we walked a short 6 minutes to Xi’an Famous Foods. Xi’an is a local Chinese restaurant known for its noodles. This restaurant on W 45th Avenue was super small. We ate in a corridor area, past the register, that was standing room only.

Except for how crowded it was, even at 2 PM, the place was great. I would recommend it to anyone who loves hand-pulled noodles.

From Xi’an, we walked five minutes up W 45th Avenue to the corner of Time Square.

As it was during the daytime, it didn’t have the same effect as going later at night. Still, I was amazed my just how dizzying and commercial the space was. Watching the square from New Year’s Eve ball drops on TV, definitely does not do justice to just how big this space is.

All in all, it felt like a colder Hollywood with the sheer number of tourists walking around and performers trying to get their attention. If you only have time to go to Time Square once, it recommend going at night for the huge impact of all the flashing screens.

From Time Square, we walked to nearby Bryant Park where there was a holiday expo going on. The entire park was lined with well over 100 small boutique shops selling everything from handmade scarves to drinking chocolate.

We continued on our way to the Empire State Building where we were treating to stunning views of The City.

Entrance to the building is granted if you have official business to the building. Otherwise, you need a ticket to make it to the observation deck of the building. Tickets are available in advance or for purchase at the onsite ticket office.

When you’re in the Empire State Building, because of the central location of the tower, the view is amazing. I was able to recognize the Freedom Tower to the south and see parts of Central Park to the north. Even with such a nice view, I was amazed at just how far the city reached. It was definitely sobering seeing just how much city and density of people was in one small area.

With the sun beginning to set, we headed to Chinatown to meet up with our hosts. We enjoyed modern Asian food before heading back to Time Square to take in the night time view. 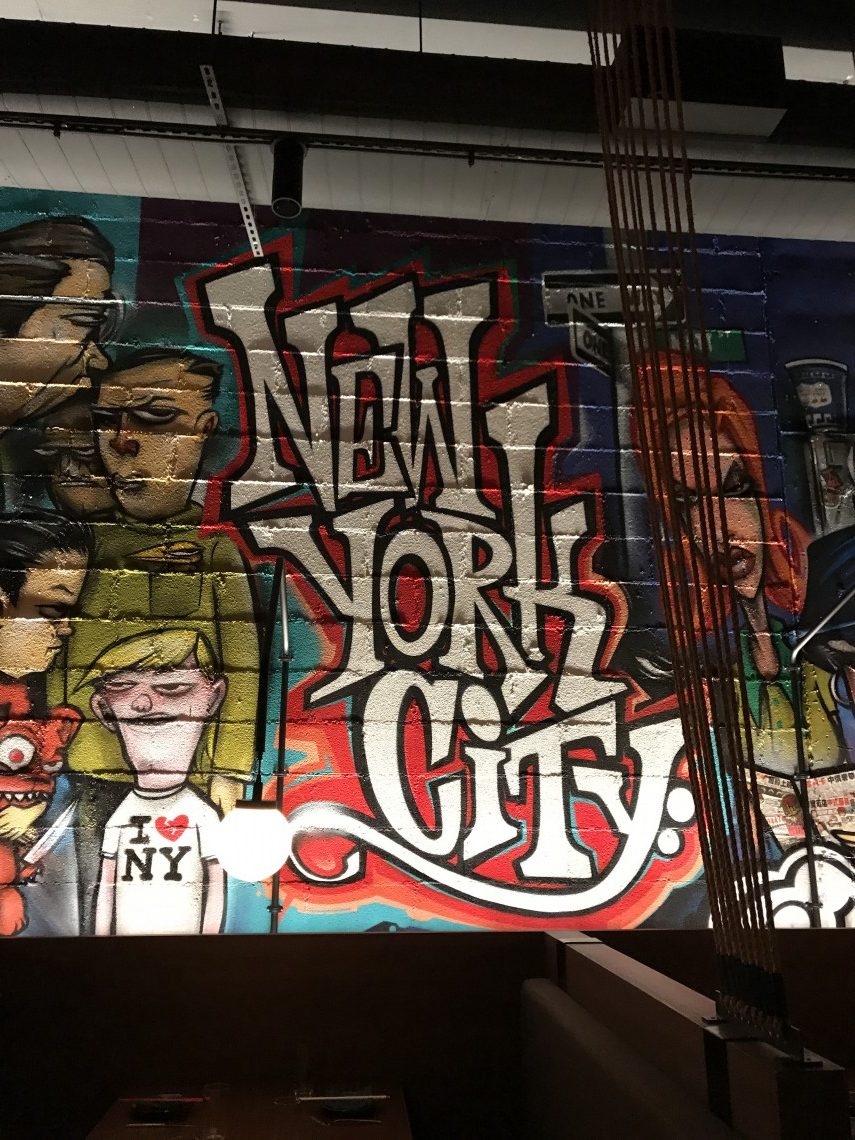 I loved how vibrant, even at night, New York City was. People were everywhere and the city was alive, even as it neared 10 PM.

After visiting The Disney and M&M’s store, we headed back to Queens to retire for the night. Along the way, we passed by this restaurant which was aging meat (you can see the mold on the outside). I haven’t seen this anywhere else, so it was a pleasant surprise.

Though we only hit a few key landmarks, these destinations and the vibe of the city made the day totally worth it. The bigger day would follow.