My List of the Top 15 Things to do in Hualien

Hualien County is one of the largest counties in Taiwan. Due to the terrain though, Hualien has one of the smallest populations. Nature is never far away and the culture, here, is much very attune to that.

At the heart of Hualien County is Hualien City (花蓮市 / hua lian shi). Hualien City has one of the largest populations of indigenous Taiwanese people. This further plays into the cultural fabric of the region.

All in all, Hualien to me represents great food, an indelible culture, and adventures that won’t easily be forgotten. I hope that this guide can help you discover the wonders that Hualien has to offer.

Here is my list of the top 15 things to do in Hualien County. 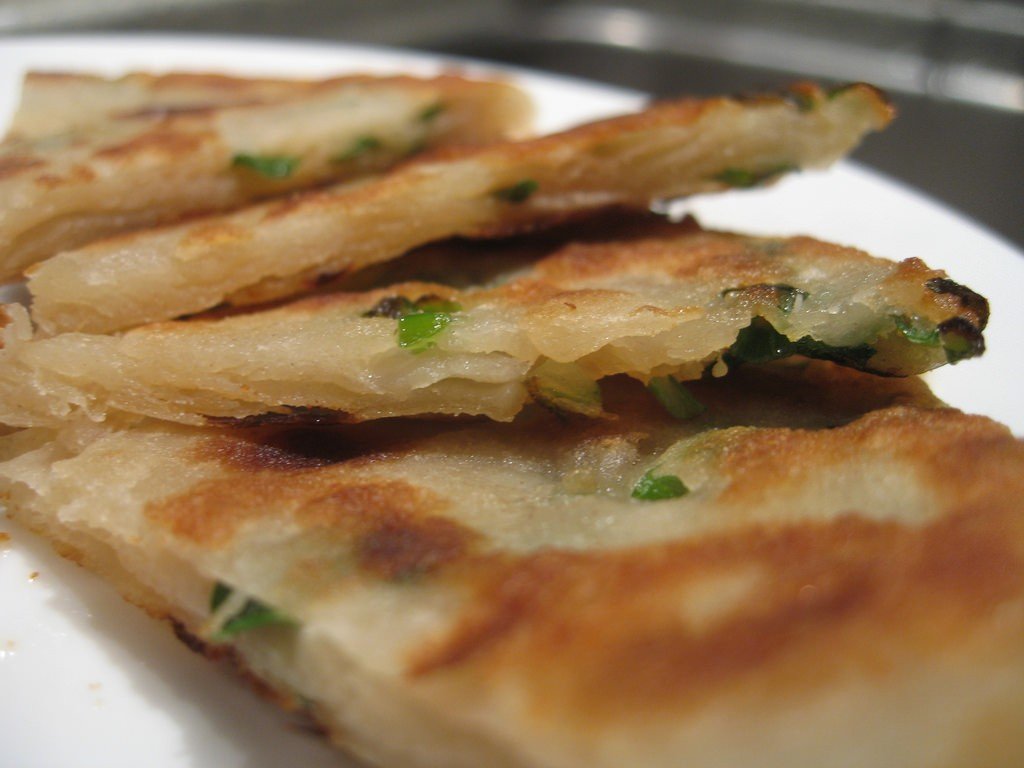 Contents hide
1 15. Choose the “Yellow” Car for Pancakes
2 14. See the Three Unique Shades of the Pacific Ocean
3 13. Experience Simple and Delicious Wonton Soup
4 12. Enjoy Late Night Breakfast and Taiwanese Macarons
5 11. Pick, Cut Open, and Enjoy a Hualien Watermelon
6 10. Take in the Cultural Soul of Hualien
7 9. Paddle Around the Largest Lake in Eastern Taiwan
8 8. Stuff Yourself Silly with Delicious Dumplings
9 7. Wander Around Downtown Hualien
10 6. Give Muntjac Meat a Try
11 5. Experience an Explosion of Flavor
12 4. Sample Your Way Through Deliciousness and Culture
13 3. Enjoy the Best Mochi Taiwan Has to Offer
14 2. Appreciate How Vast and Beautiful Nature Can Be
15 1. Hike, Climb, and Swim up a River

15. Choose the “Yellow” Car for Pancakes

Probably one of the more popular local spots to check out in Hualien is Yellow Car Spring Onion Pancakes (炸彈蔥油餅 黃車 / zha dan cong you bing huang che). This stand selling green onion pancakes is run out of an old yellow truck. There are actually two such trucks selling the same thing, a blue and yellow truck. Both trucks are also located near each other on Fuxing Street (復興街 / fu xing jie)—how convenient!

I heard stories about the crispy dough and egg that bursts with flavor when you bite into it. When I tried to get my pancake on, I arrived minutes too late though. There were close to twenty people already at the shack waiting to pick up the last of the remaining available orders. If just for the hype and doing something more local, I would give Yellow Car Spring Onion Pancakes a try. 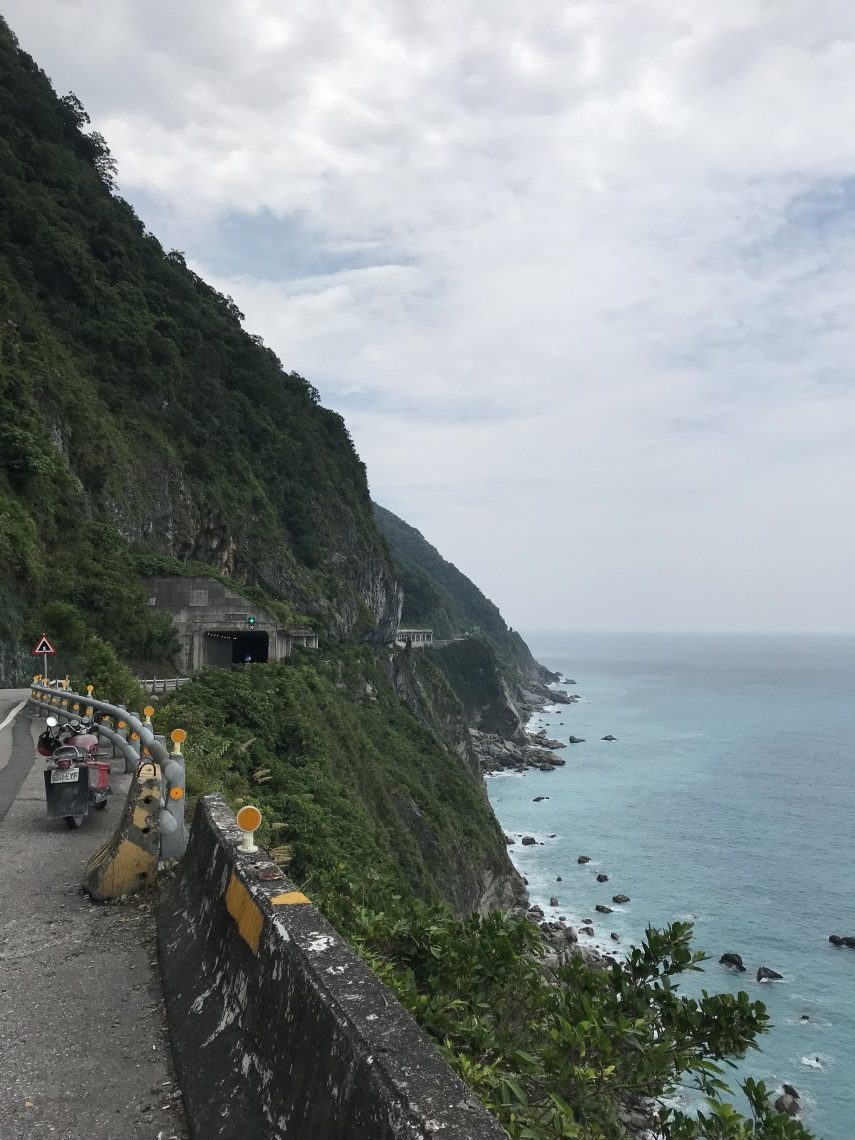 14. See the Three Unique Shades of the Pacific Ocean

As I previously mentioned, my experience with one of the eight wonders of Taiwan, Qingshui Cliffs (清水斷崖石碑 / qing shui duan ya shi bei), was short-lived. That doesn’t mean that you shouldn’t check out the impressiveness of this sheer cliff paired with the blueness of the Pacific Ocean.

Especially with better weather, I can see how Qingshui Cliffs remains a go to destination along the route between Yilan and Hualien. It’s Mother Nature at her best, both wild and beautiful.

You wouldn’t know from the outside that Daiji Bianshi (戴記扁食 / dai ji bian shi) has amazing food. Look around the shop and you’ll just see blank walls. Like so many other delicious restaurants in Taiwan though, what they lack in decor, they make up in flavor.

Served in a disposable cup, with simple garnish, it’s definitely not trying to be anything more than what it is—simple and delicious wonton soup. Stop by for a quick snack here before enjoying many more treats at the local night market. 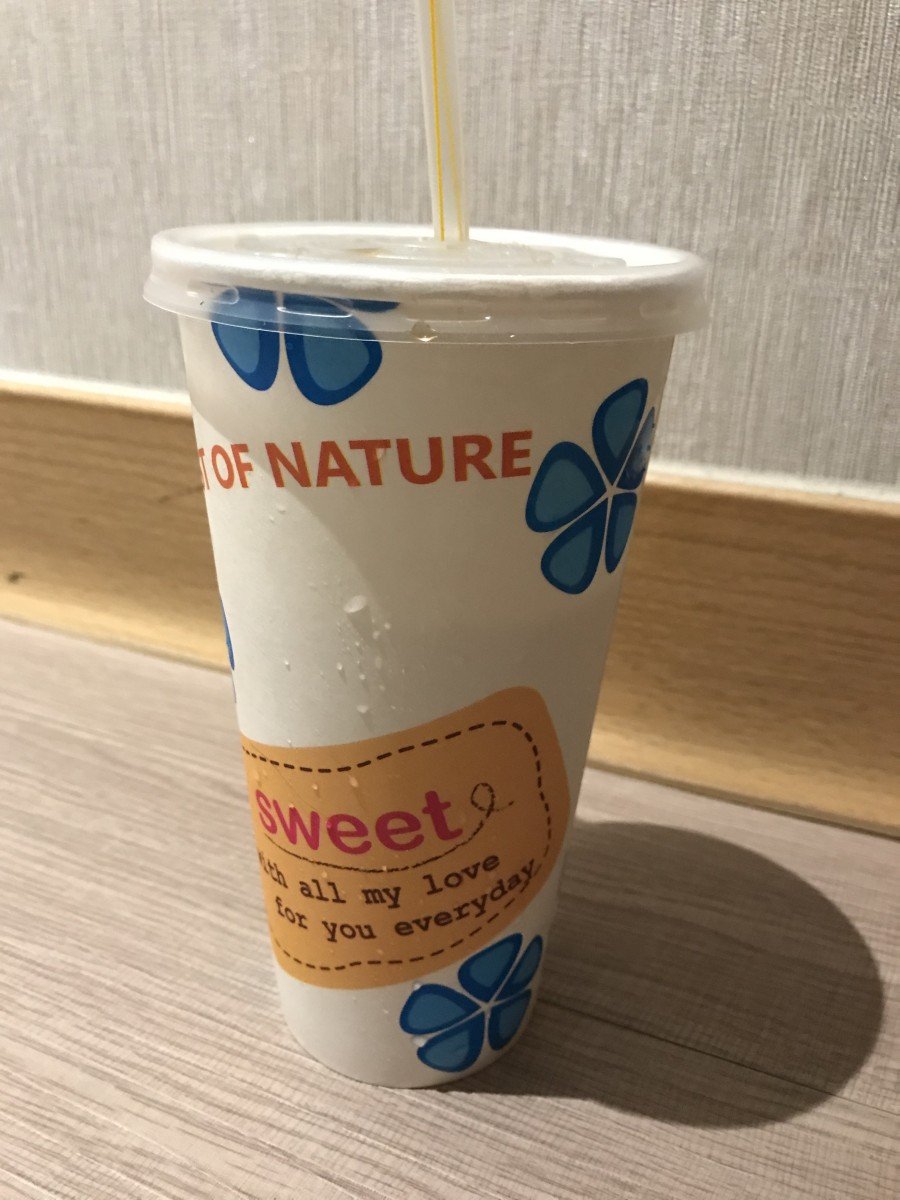 I’m a big fan of breakfast when it’s not breakfast time. Not surprisingly, Miaokou Black Tea (廟口紅茶 / miao kou hong cha) checks the right boxes here as it’s one of the few breakfast places that is open 24 hours. Oddly enough, this isn’t what makes the place special though.

Miaokou’s claim to fame is the system by which they deliver their signature drinks. Using a dual system of tubing, the inner pipe holds the drink while the outer pipe circulates cold water. This allows the inner drink to remain cool and undiluted. The tea was strong and a little sweet even. They also have Taiwanese macarons, which I’ve never seen before. They’re definitely something to experience. 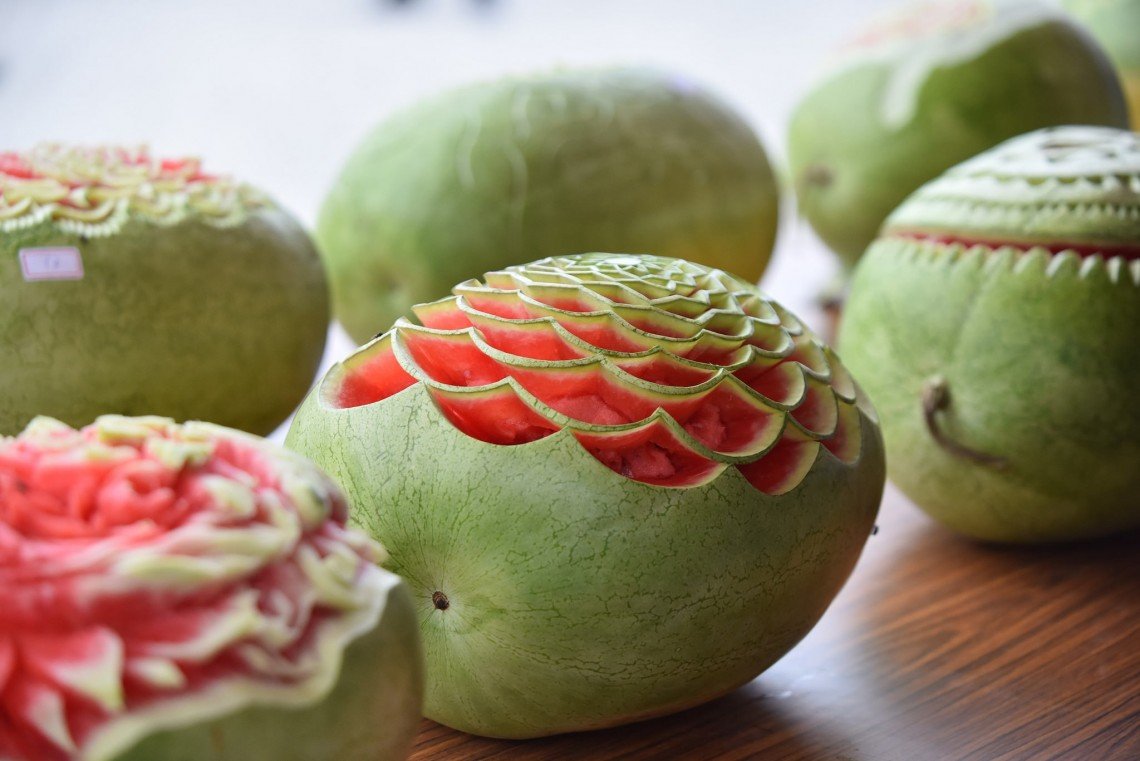 With such wonders as Changhua’s grapes, Tainan’s mangos, and Chiayi’s pineapples; it’s not surprising that Taiwan is known as the “Fruit Kingdom.” But where does Hualien fit in? Apparently, with its large, lightly colored watermelons (西瓜 / xi gua).

Whether orange or red on the inside, both varieties pack just the right amount of juiciness and sweetness that you would expect from a great watermelon. You can pick one up at various stands along the road or, if you’re more adventurous, check out a u-pick watermelon farm in Hualien [Traditional]. 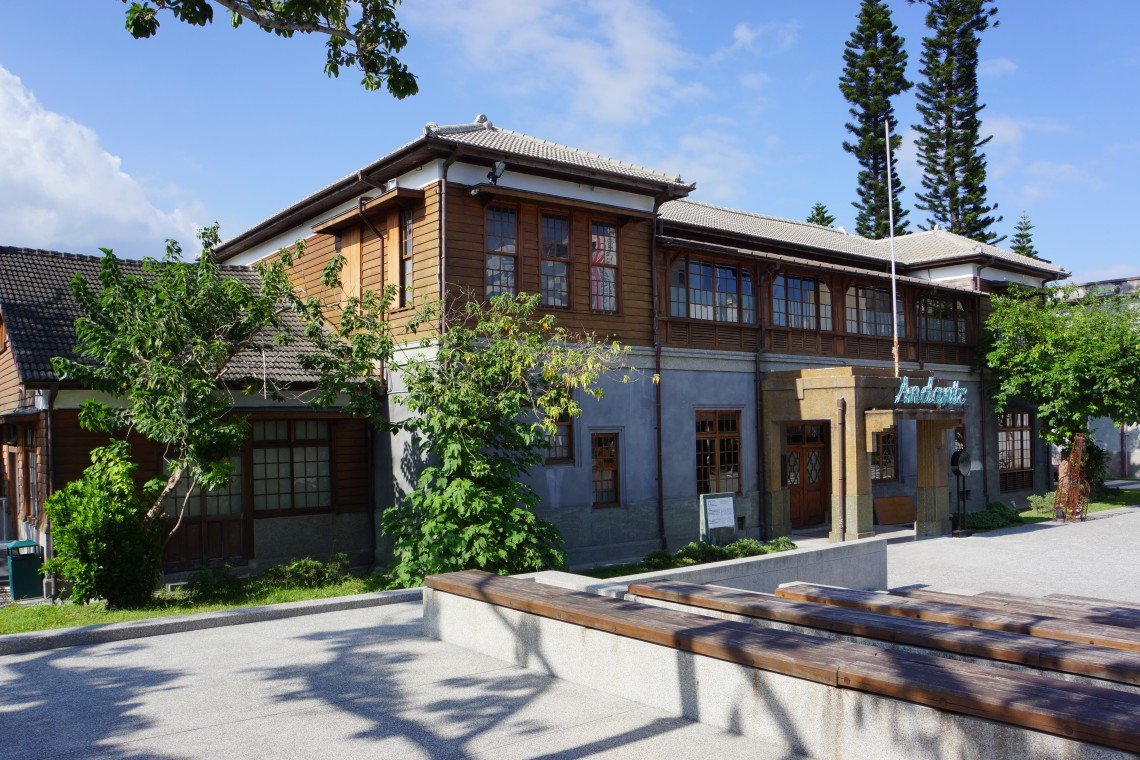 10. Take in the Cultural Soul of Hualien

What was once a wine factory is now a source of culture in the heart of Hualien. A|Zone Hualien Cultural and Creative Industries Park (花蓮文化創意產業園區 / hua lien wen hua chuang yi chan ye yuan qu) is over 8 acres of open space and factory buildings repurposed into creative spaces. It’s easy to get lost going from one building to the next, taking in all the sights.

I particularly enjoyed checking out what the local art and handmade goods scene looked like. It was also refreshing to experience more of the indigenous Taiwanese culture here. 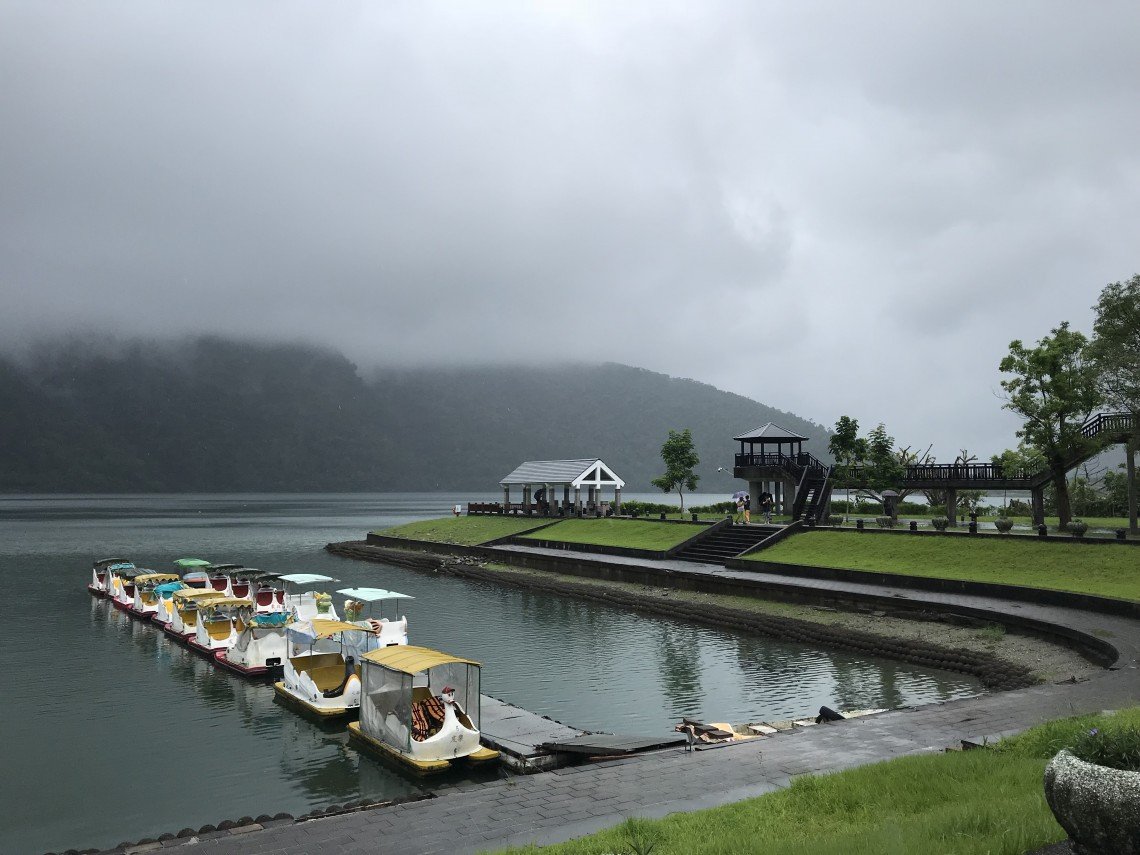 9. Paddle Around the Largest Lake in Eastern Taiwan

During the warmer months, people from all over Taiwan flock to Liyu Lake (鯉魚潭 / li yu tan) to paddle around swan boats. Even on a dreary, rainy day, the lake is a relaxing place to visit with its vibrant greenery and raised viewing points. If you’re lucky enough to visit during April, you may even be able to see the thousands of fireflies that float above and light up the lake at night.

Across the street from the lake, dozens of restaurants provide sustenance making this destination more than just an isolated recreational area. It’s a great spot where families come to relax the whole day. 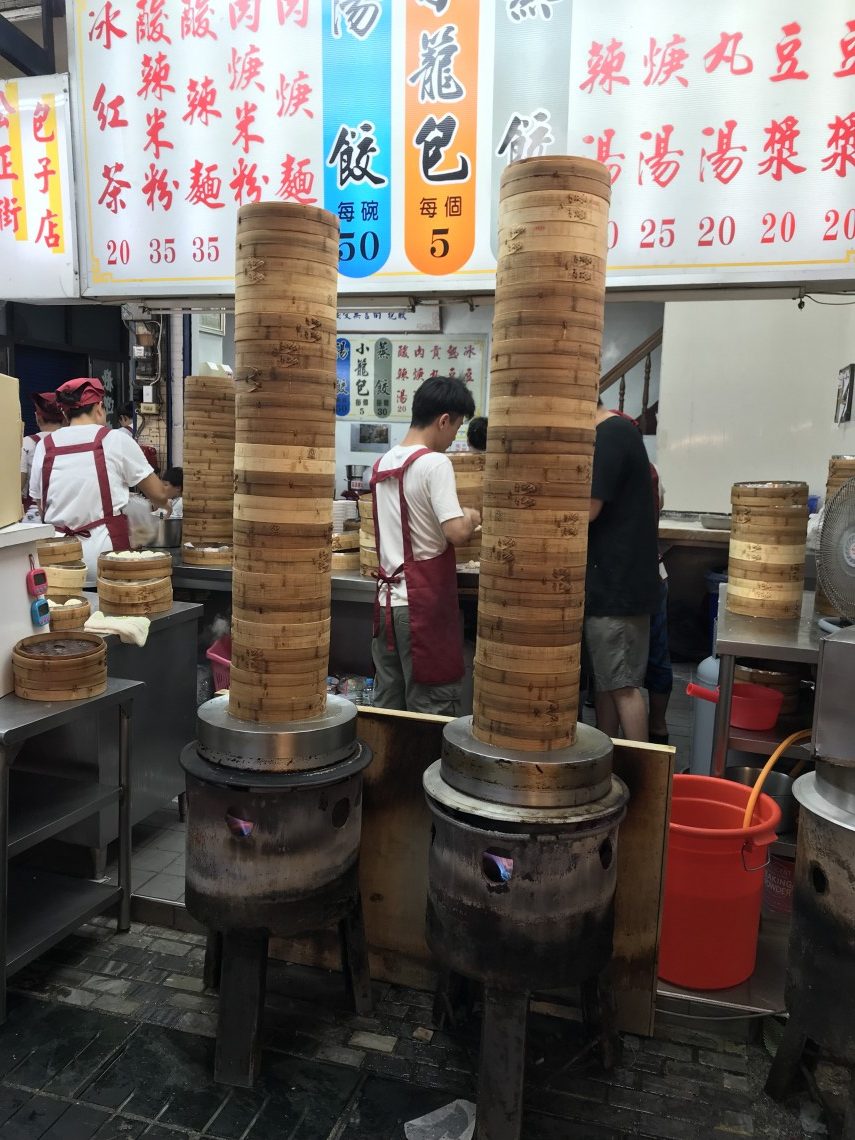 8. Stuff Yourself Silly with Delicious Dumplings

There’s a multitude of places to eat around the intersection of Zhongshan Road (中山路 / zhong shan lu) and Gongzheng Street (公正街 / gong zheng jie), but Gongzheng Baozi (花蓮公正包子店 / hua lian gong zheng bao zi dian) was where I landed. Boy was it a good choice.

The soup dumplings are the doughier type, so there’s not that much in the way of soup. That doesn’t make them any less delicious though. Get a few for a snack and a few more for the road. They’re also pretty cheap at 5 NTD a piece. For an added treat, stroll along Zhonghua Road (中華路 / zhong hua lu) for a variety of boba drink choices. 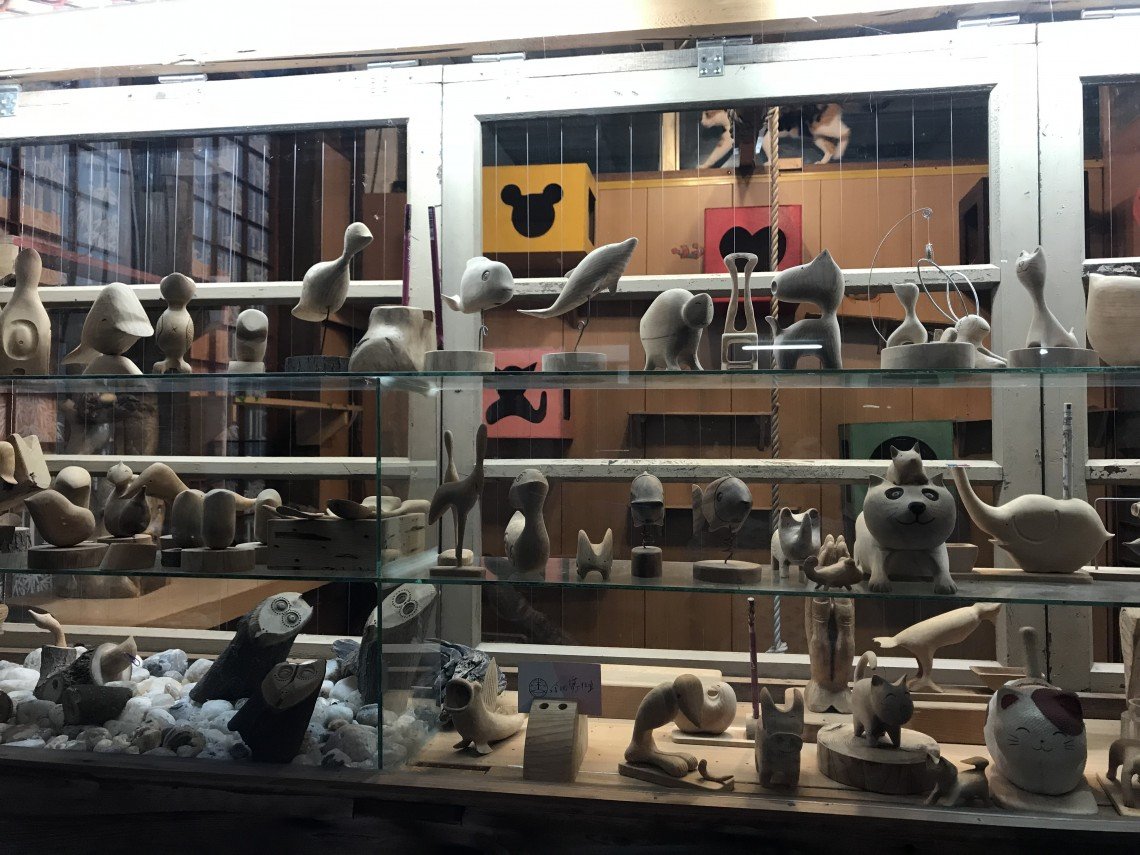 Speaking of Gongzheng Baozi, the area encompassed by Linsen Road (林森路 / lin sen lu), Heping Road (和平路 / he ping lu), Mingli Road (明禮路 / ming li lu), and the ocean is a great place to stroll around and discover something new. Local shops and eateries line the the various streets here.

Like walking around the streets of Taipei, I really felt like I learned about the culture of the area from wandering around downtown Hualien. It’s a unique blend of indigenous, Japanese, and Taiwanese culture that you have to experience for yourself. 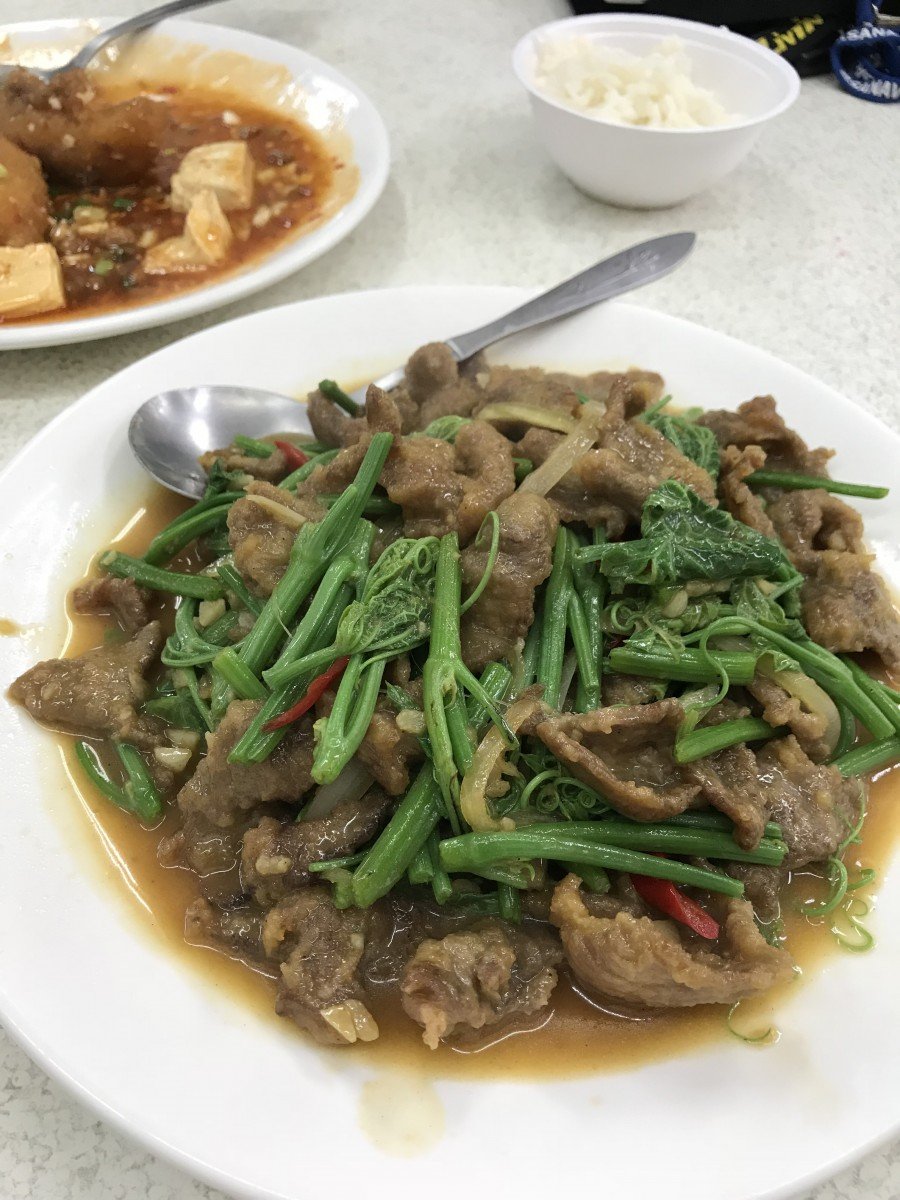 6. Give Muntjac Meat a Try

I’ve had my fair share of unique meats before including alligator, but when I heard that we could enjoy a dish with a local type of deer, I was intrigued. Muntjac (山羌肉 / shan qiang rou) has the gaminess that you would expect but much of any unpleasantness was tempered by the amazing sauce the meat was prepared in.

In the end, I really enjoyed this dish and the many others we got for lunch at Lihua Fengwei Restaurant (麗華風味館 / li hua feng wei guan). There may be other locations for muntjac, but this was such a memorable meal, I can’t help but recommend Lihua. 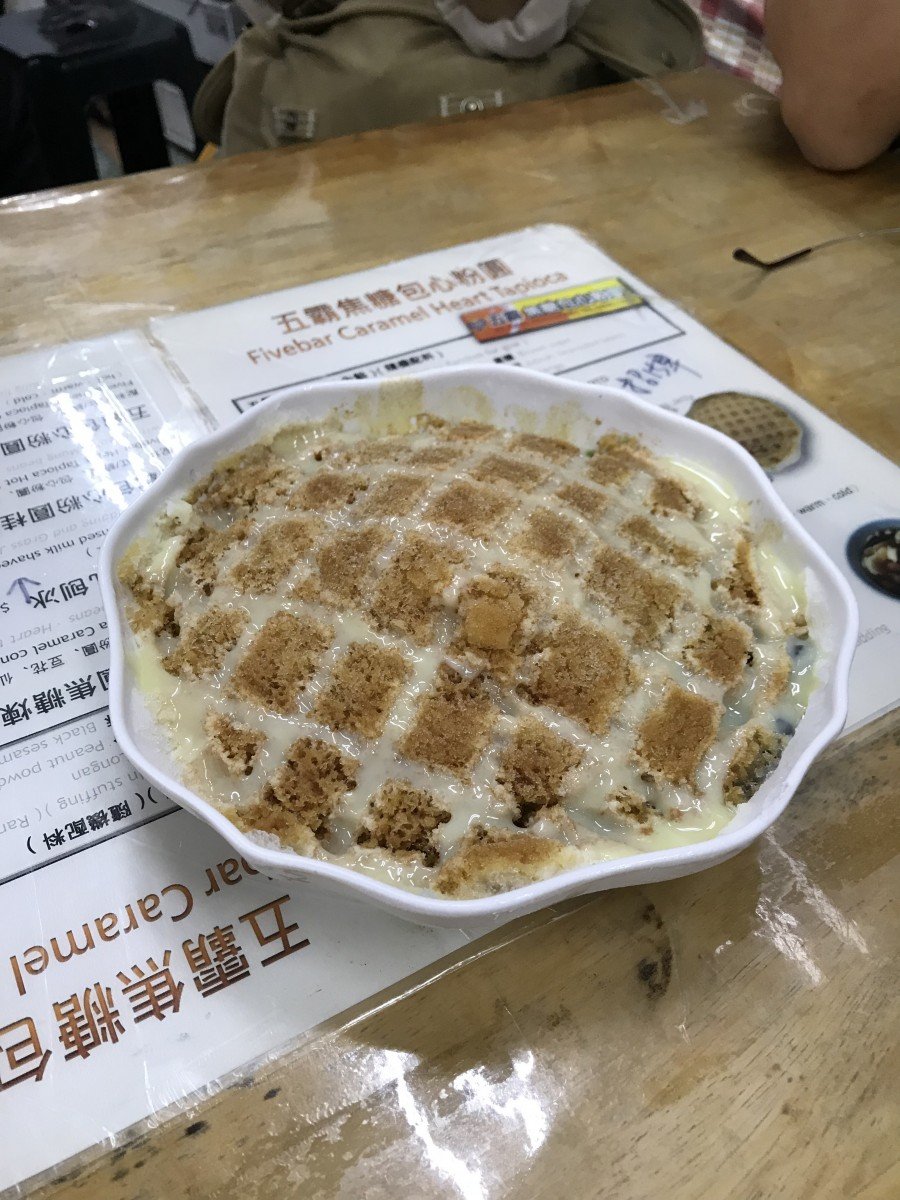 5. Experience an Explosion of Flavor

Shaved ice and shaved snow is a big deal in Taiwan. Especially during the summer, it’s not very hard to go walking around without stumbling upon a shop selling some kind of frozen ice dessert. Coincidentally, I was surprised when I took my first bite of Fivebar Caramel Heart Tapioca. In that moment, everything I thought I knew about ice desserts was thrown out the window.

Beyond the coldness and texture of the ice; the caramel, red bean, tofu pudding, condensed milk, and heart tapioca create a texturally satisfying and delicious dessert that I haven’t encountered anywhere else. I think I’m also in love with the experience of trying to figure out which of the eight flavors each tapioca ball was. Fivebar (五霸焦糖包心粉圓 / wu ba jiao tang bao xin fen yuan), despite its appearance, gets a big thumbs up from me. 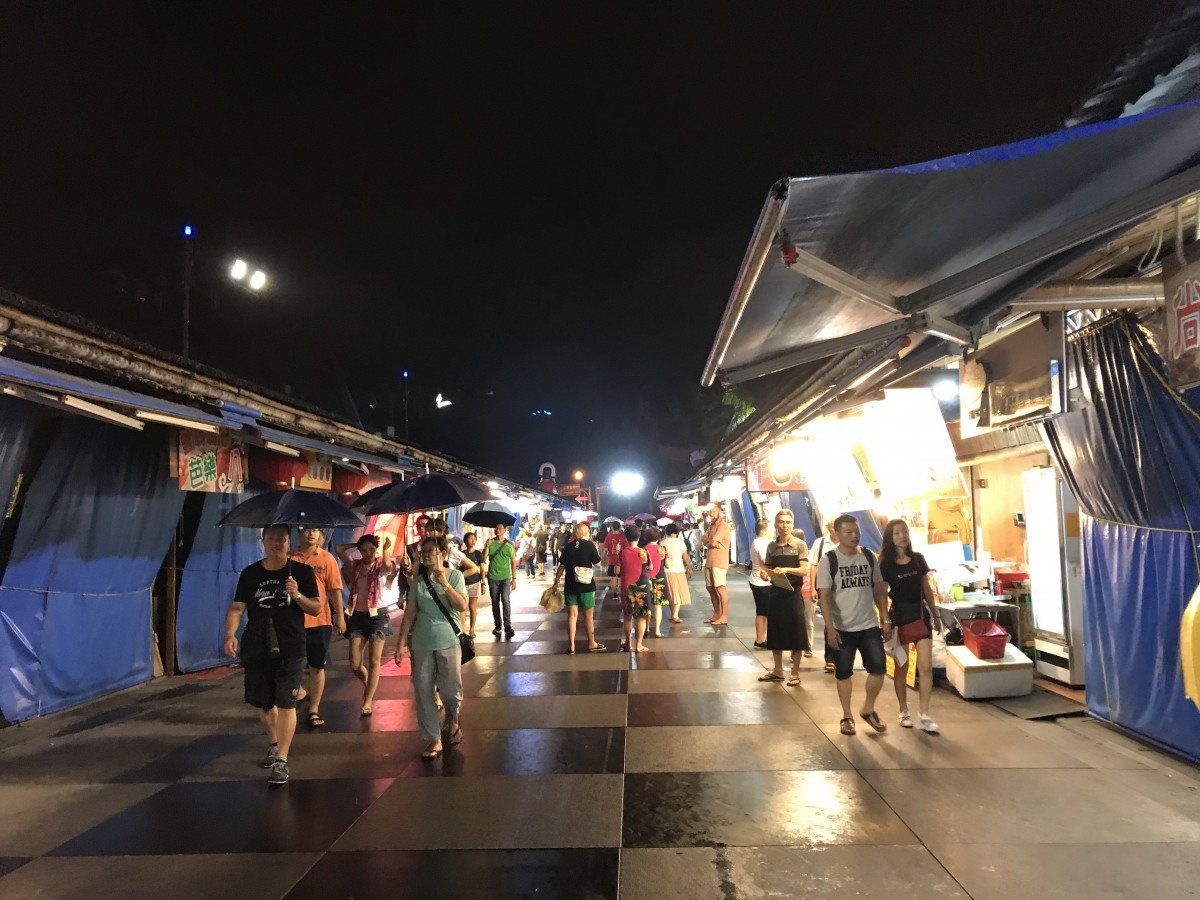 4. Sample Your Way Through Deliciousness and Culture

If you haven’t already figured out the strong connection to indigenous culture in Hualien, you’re in for a real treat at the largest night market in Hualien, Dongdamen Night Market (東大門夜市 / dong da men ye shi).

Though it was raining when I visited, because the night market consists of shacks neatly arranged, there were still many options for eating, shopping, and gaming. Indigenous food shines brightly with some night market fare that can only be found in Hualien. 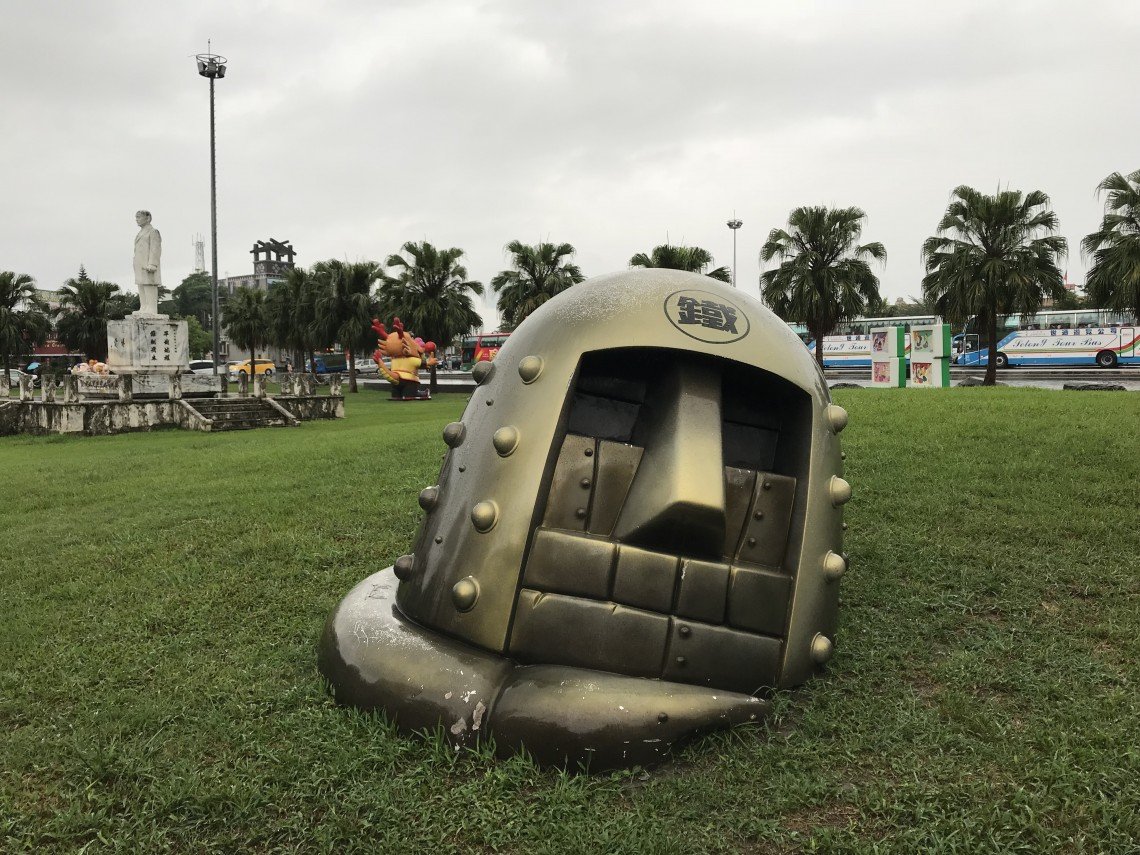 3. Enjoy the Best Mochi Taiwan Has to Offer

As a Japanese American, I feel like I know mochi. The sweet, sticky rice dish and I go together like two peas in a pod. Most of the mochi that I’ve encountered in Taiwan, including those from the Taiwan Mochi Museum, has just been okay—that is, until I came to Hualien.

Perhaps because of Hualien’s proximity to Japan, Hualien has a culture of producing high quality mochi (麻糬 / ma shu), that is a combination of both cultures. A place that still has me drooling, just thinking about the mochi, is Zengji Mochi (曾記麻糬 / zeng ji ma shu).

I visited the location across the park located near the main Hualien train station (which is featured above). Here, the shop sells a variety of mochi items. The main feature though is the handmade filled mochi that you order by type and quantity. Don’t forget to grab at least one peanut and matcha mochi! 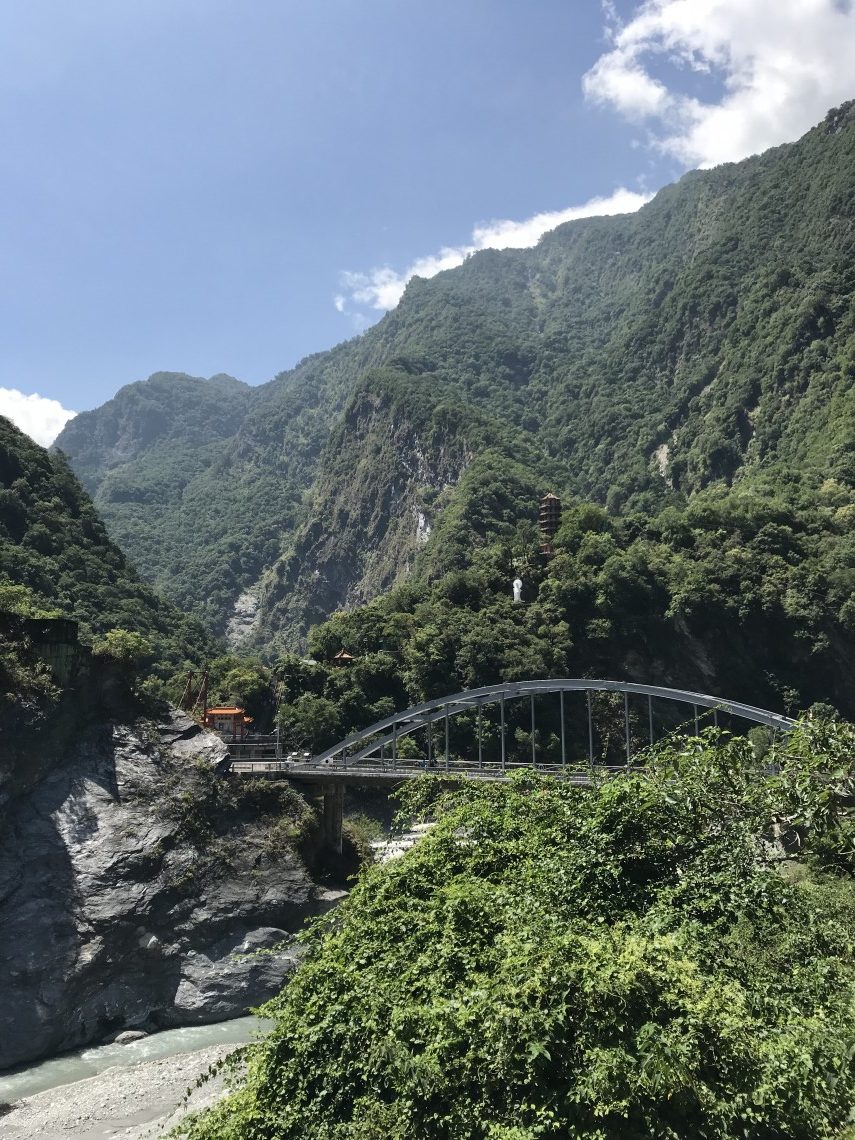 2. Appreciate How Vast and Beautiful Nature Can Be

I don’t think it’s possible to create a great to do list in Hualien without mentioning Taroko Gorge (太魯閣 / tai lu ge). Just as the United States has the Grand Canyon, Taiwan has Taroko Gorge.

Words really can’t describe how impressive this national wonder is. Because the road runs along and close to the river in the middle of the gorge, it’s easy to be humbled by the sheer height of the cliffs.

When I visited Taroko Gorge, there was a lot of construction going on. Roads are also super narrow, so do a quick check on road conditions before visiting. 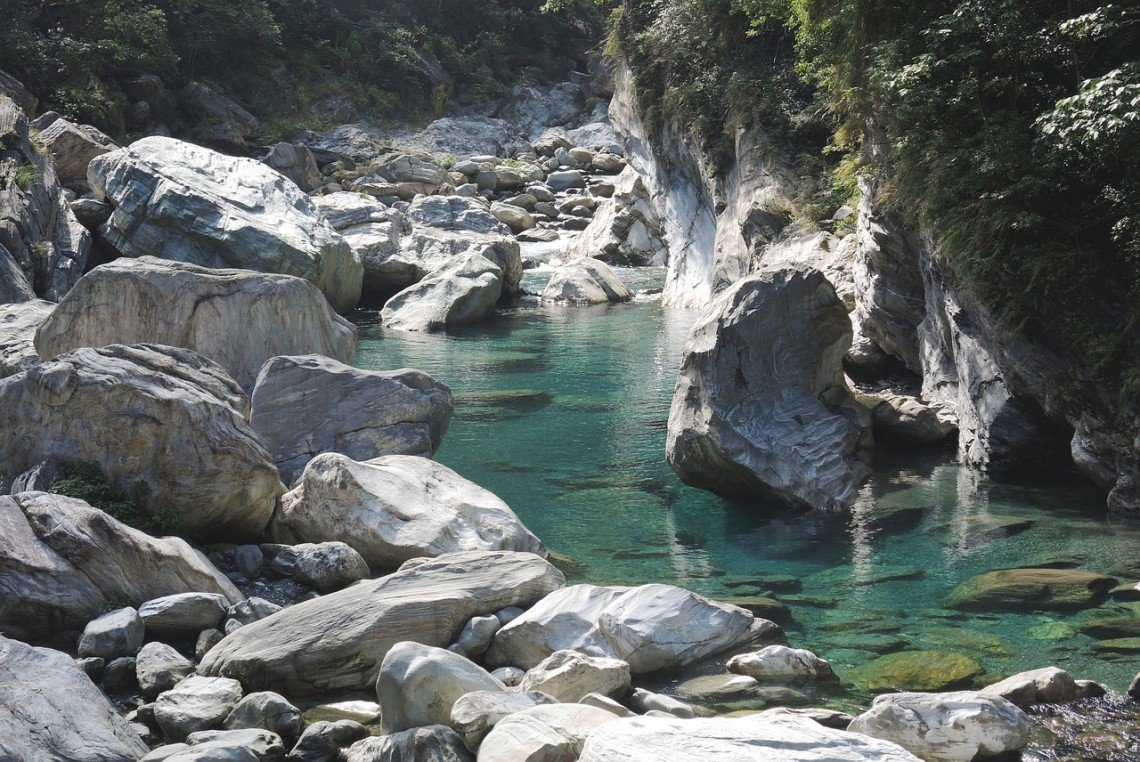 If you’re looking for something unique to do in Taiwan, river tracing has got to be on your list. For the uninitiated, river tracing is a combination of all the following: hiking, wadding in water, floating about, climbing rocks, and swimming through rivers. It’s a full body experience that will leave you closer to your group members.

My group’s leaders sized up our abilities to start and led us along a path that fit our group’s fitness really well. Our river tracing experience was just the right amount of relaxing and strenuousness. At the very end we enjoyed a camp-cooked meal before hiking back to our starting point.

At no point during the experience did I feel unsafe, even with my meager Mandarin abilities. For the tour we went on, because we also wore a wetsuit and life vest, we didn’t have to be too concerned about being swimming experts.

Overall, it was a memorable experience that I will forever hold dear and can’t wait for others to enjoy.

Hope you enjoyed this list of the top 15 things to do in Hualien. If you do any of these things or have other things to add, let me know in the comments below!