Keeping it Weird in Downtown Portland

If you’re looking for a quick one day Portland itinerary and anything like me, this may be it.

Because we didn’t have much time in Portland—we were only around for a quick weekend trip—we woke up early to get a head start on the day. Bathed in rain from the evening before, when we arrived, the city was glistening with beads of water everywhere. It was a pretty sight to behold. 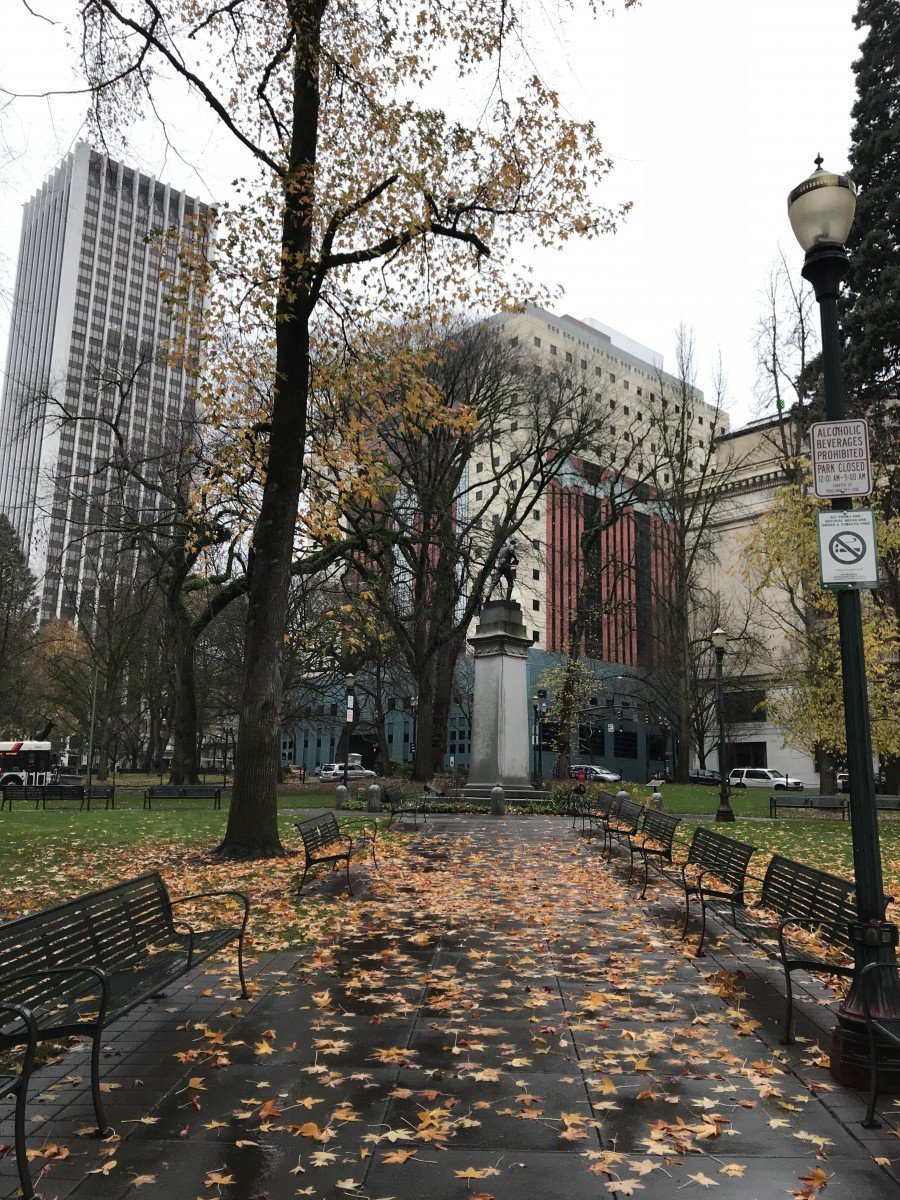 Our first stop, this morning, was to get coffee for one of my friends. Surprisingly, the city was pretty dead at 9:30 AM on a Sunday. Except for a person here and there, I thought there would be many more souls wandering around. Perhaps they were waiting for their coffee fix too to come alive. 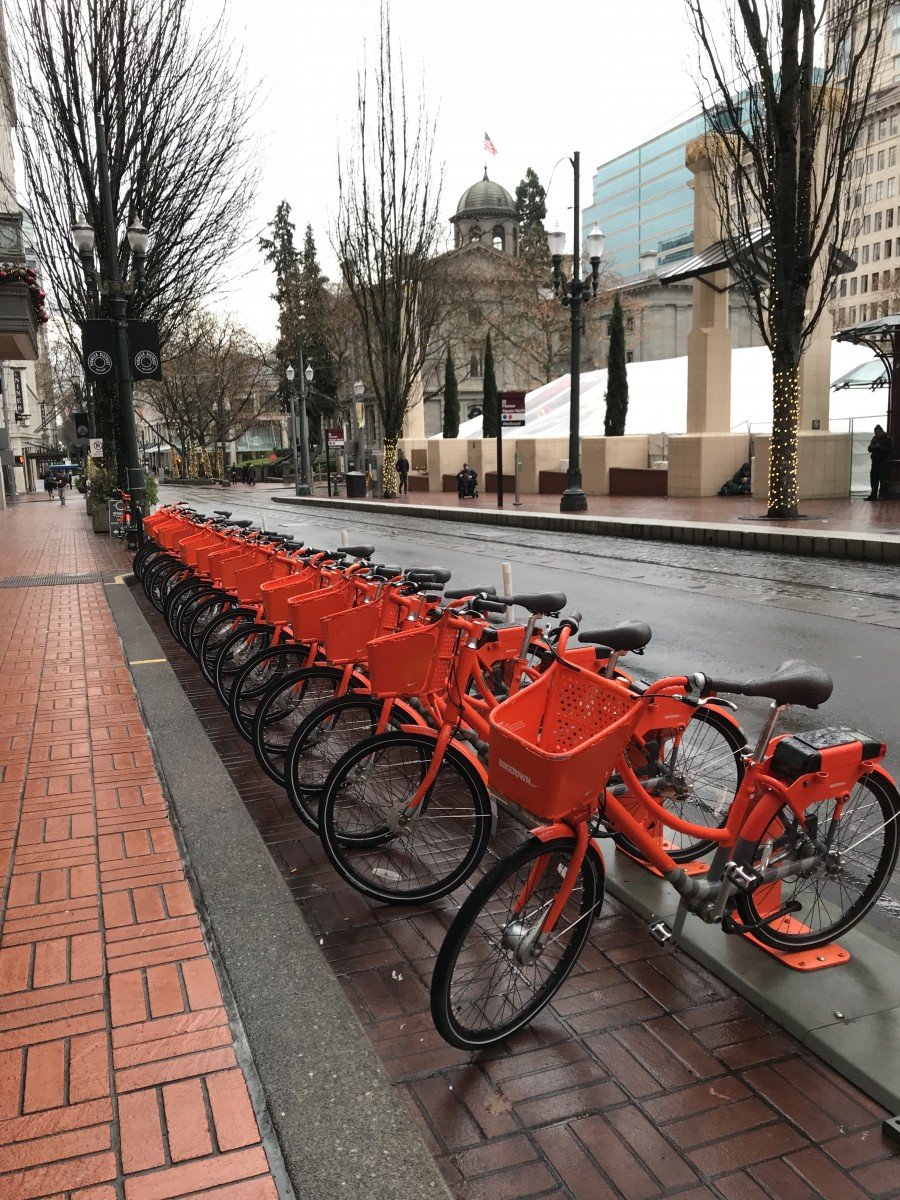 Heading north from the downtown center, we dropped by world renowned Voodoo Doughnuts. Voodoo is one of those places that’s probably a bit more hype than it’s worth. Still, with no line to speak of, we dropped in and picked up a seasonal gingerbread Voodoo donut. 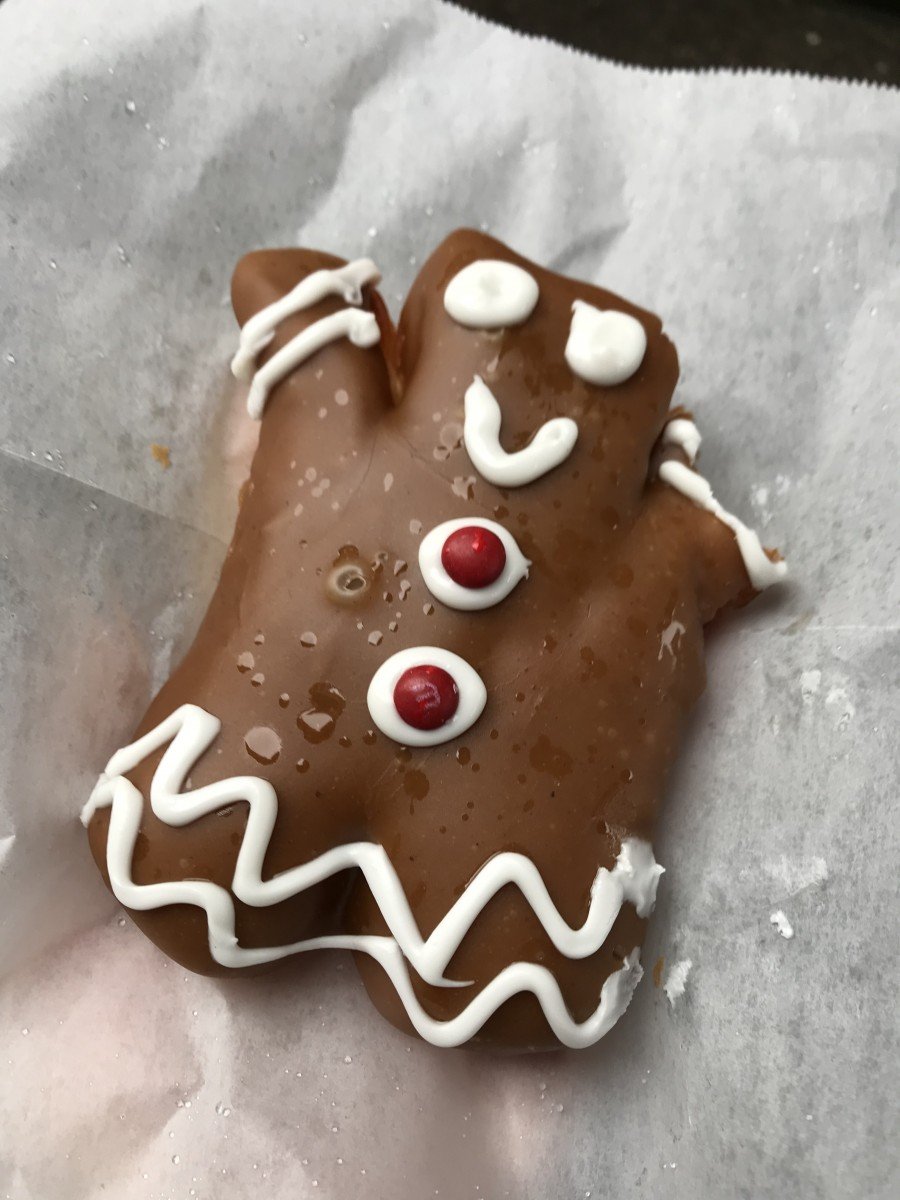 I didn’t have much control over the itinerary, so I followed by friends as we headed east across the Willamette River to East Portland. Here, we somehow stumbled into Guardian Games, one of the largest tabletop game stores in the region. 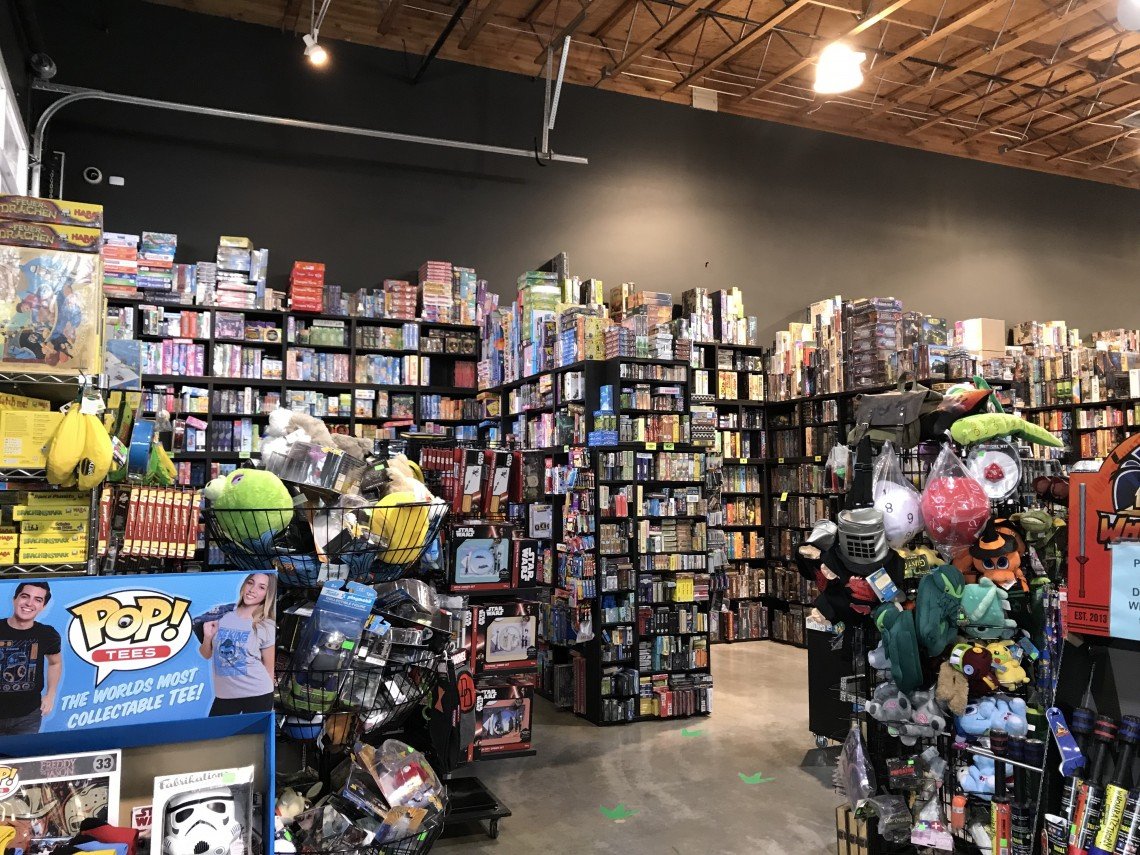 By far, this is one of the largest tabletop game stores that I’ve ever been to.

In addition to hundreds, if not thousands to board game titles, there was a dedicated play around in the back where a few people were playing Magic: The Gathering. 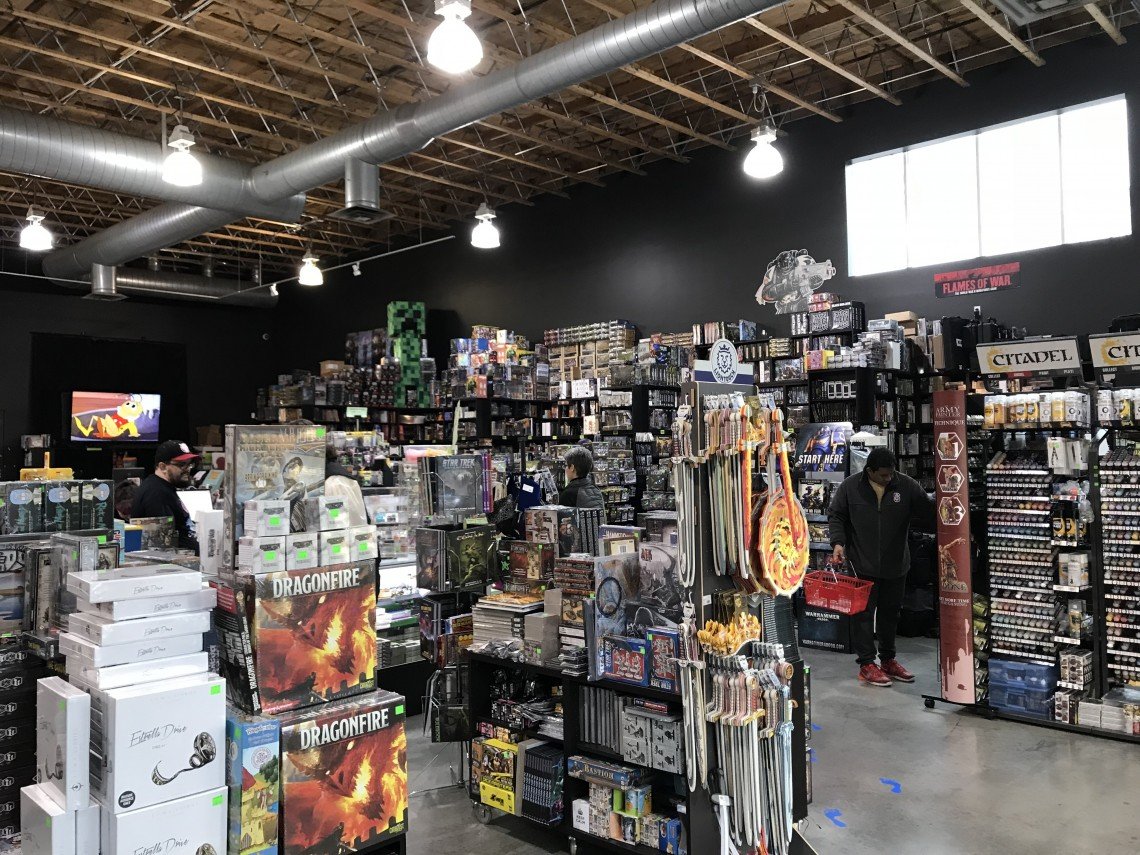 With the growth of online shopping, it’s always so nice to see friendly local game stores (FLGS) like this one growing and thriving.

Our next stop was Smith Tea where we rolled up our sleeves and got down to blending black teas. It was a fun experience and one that I would wholly recommend to anyone who loves exploring tea culture while on vacation.

By this time, it was a little after lunch. We crossed Morrison Bridge to spot by a place I suggested—Mill Ends Park. 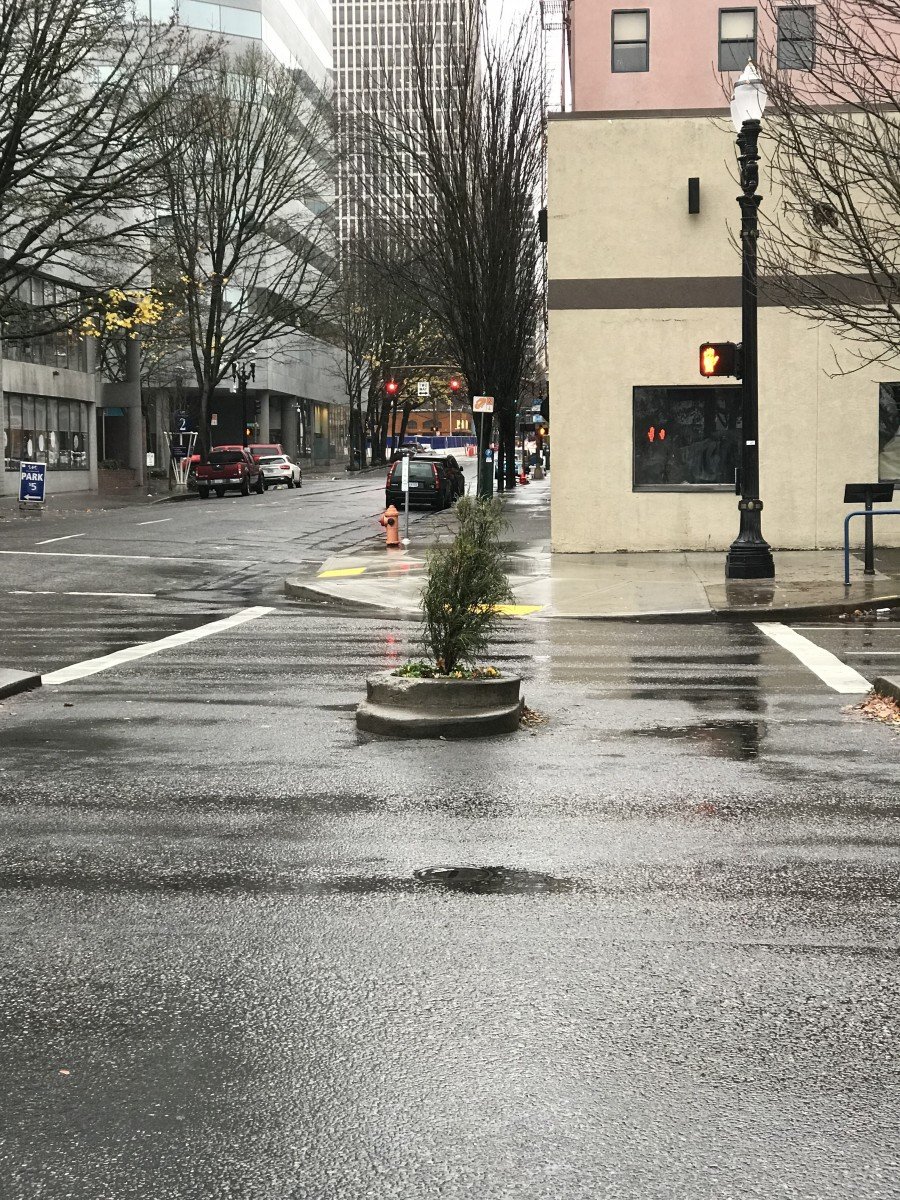 You’re looking at the park here.

My friends humored me when we went to visit what is known as the Smallest Park in the World. At two feet wide, it’s both fascinating and unassuming. Named after the ends of wood pieces from mills, it was so fun to walk around a park steeped in local history.

What started in 1948 as the site for a lamp that never came, turned into a small garden/leprechaun colony by Dick Fagan. This small plot of land gained renown as word of it spread through newspaper columns. Eventually, it was dedicated as a park in 1976.

Having only really snacked on donuts, tea, and crackers at this point, we dropped by a local food hall.

Of course instead of getting actual lunch food, we got ice cream and a pretzel. 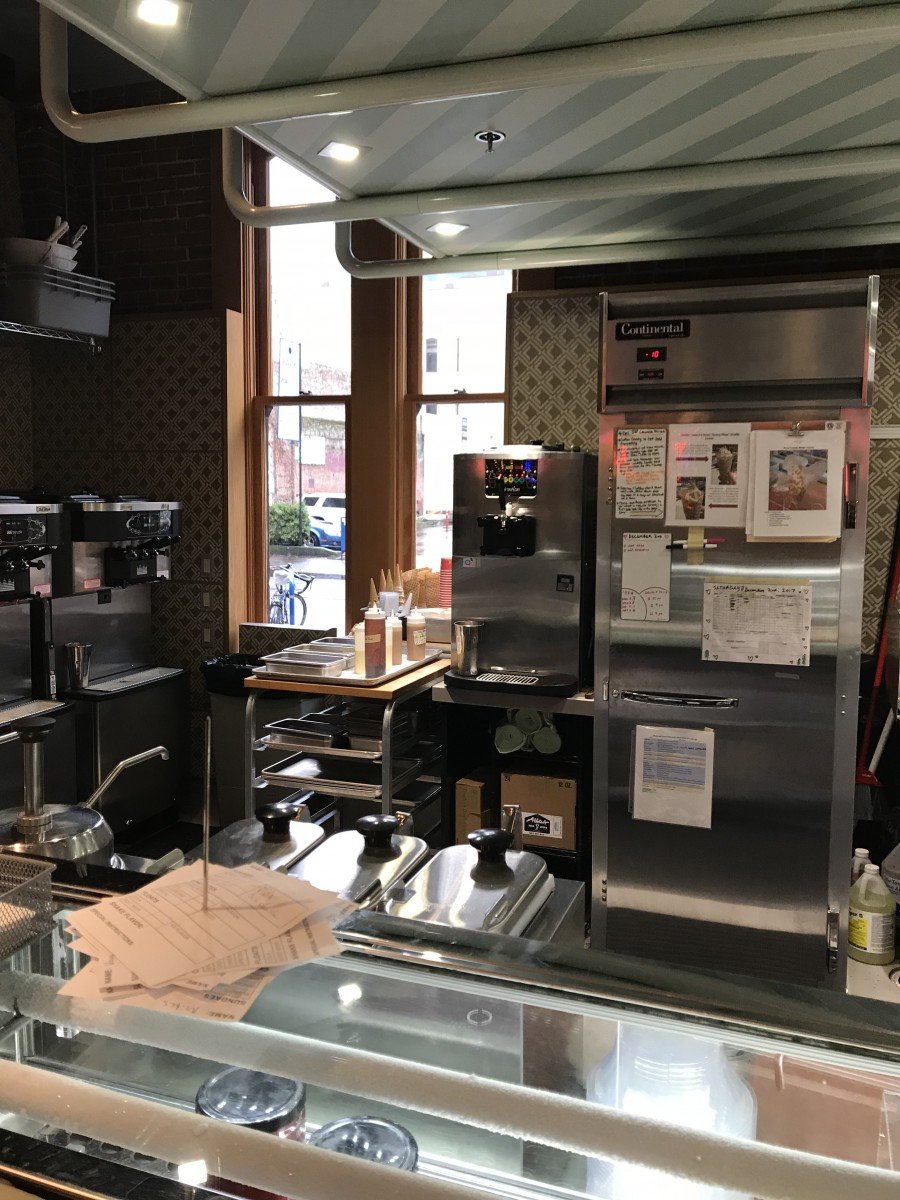 This shop also had cheesecake, which was tempting. 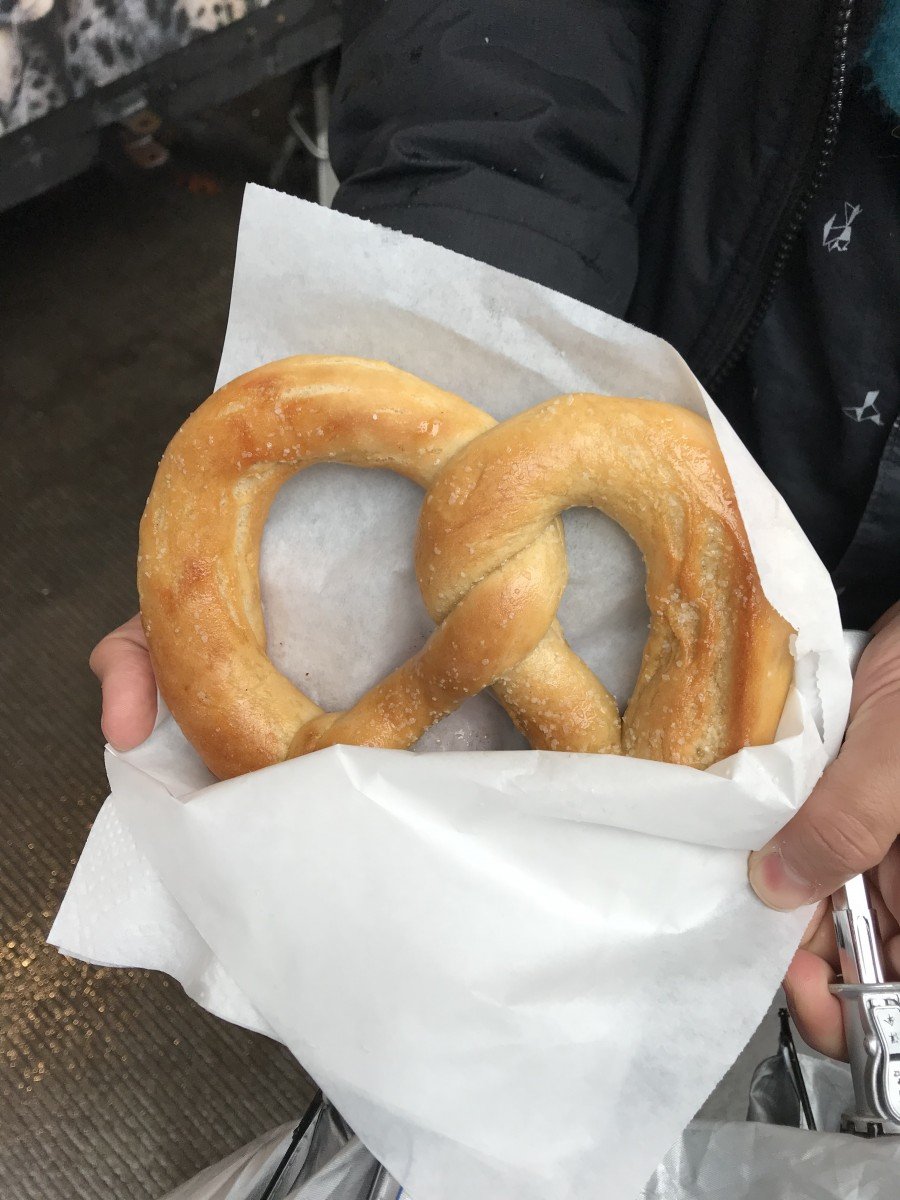 Back in Downtown Portland proper, we slowly made our way to dinner. Along the way, we passed by a number of these bubbling fountains that look like something out of a Dr. Seuss novel. 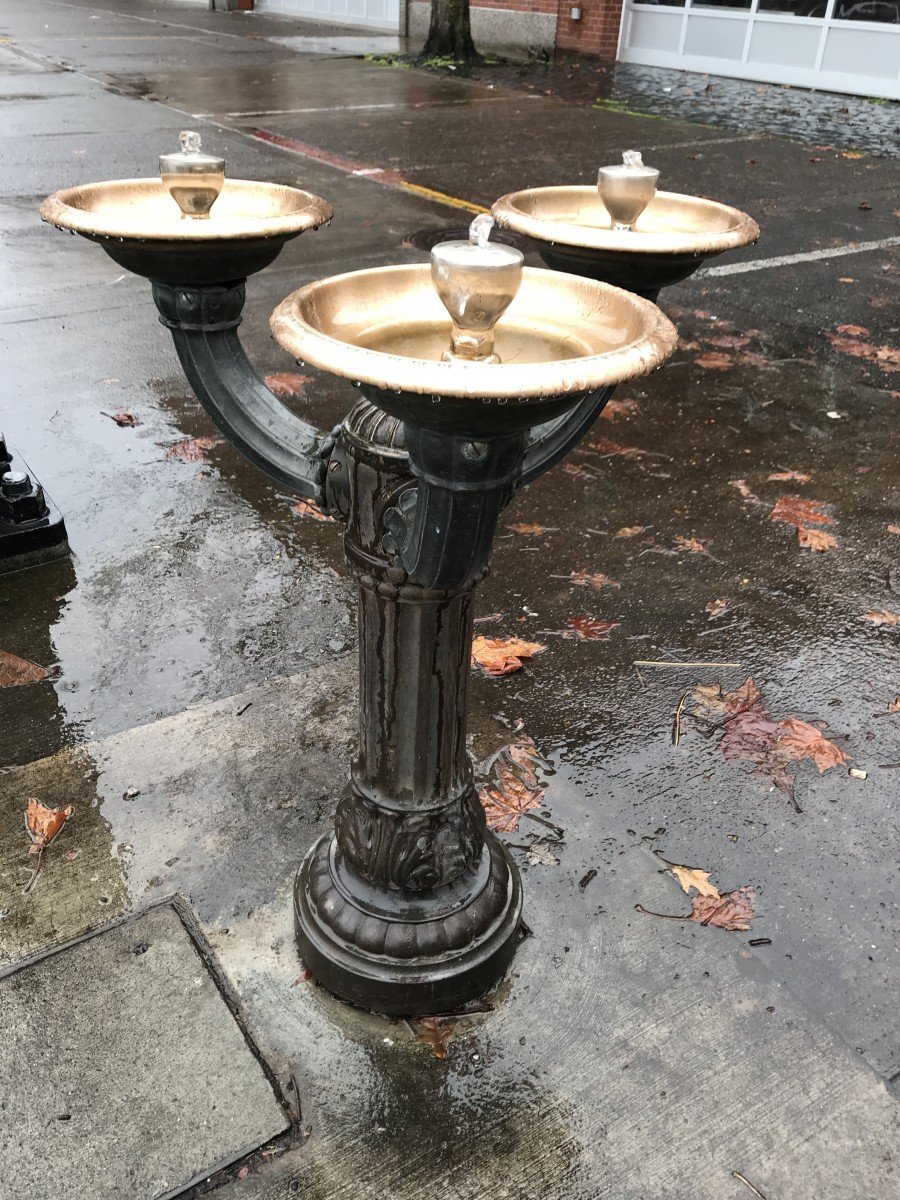 These fountains are actually city-owned drinking fountains called Benson Bubblers. They come in a variety of shapes and sizes, including single-bowl sizes. Though you can drink from them and they serve Bull Run drinking water, I didn’t give them a try, instead electing to inspect them up close and listen to the gentle bubbling of water. 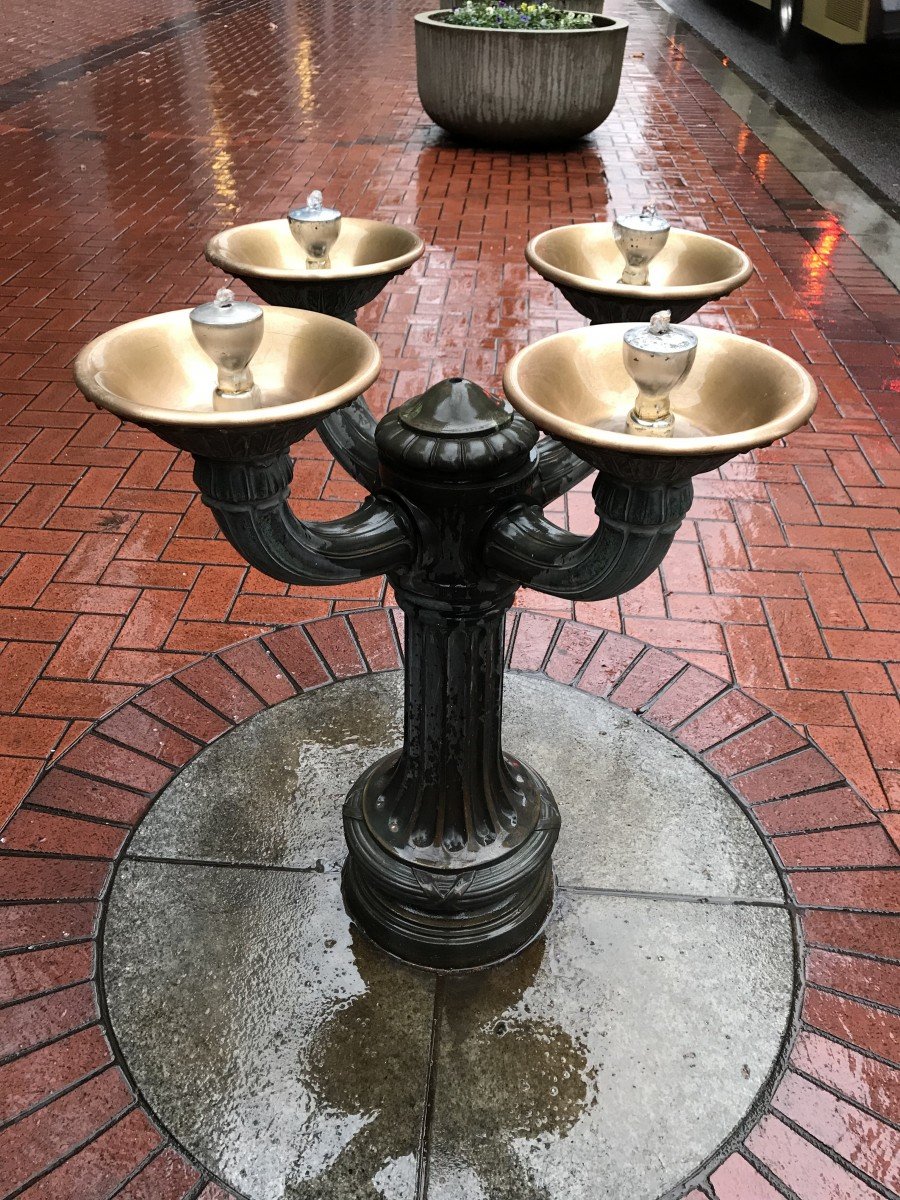 While walking around downtown, we also stumbled upon Portlandia. It’s a stunning piece featuring the woman from the city seal. 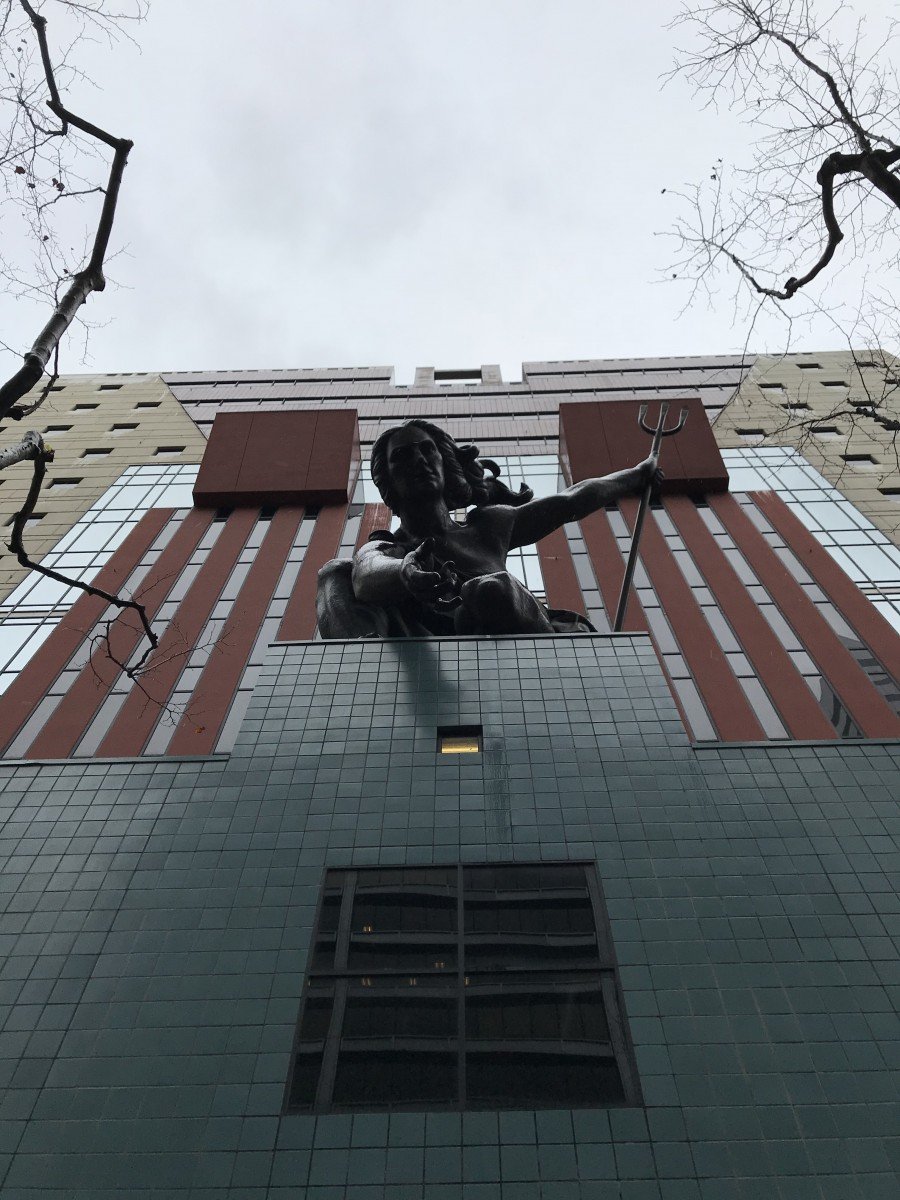 For dinner, we stopped by Tasty N’ Alder. The food was good, but we definitely ordered more than we should have. We came away from the experience with an almost fully-formed fish leftover. This place is more known as a brunch joint, so it will be interesting to see how their breakfast fare compares.

After dinner, we stopped by the famous Powell’s Books—the worlds largest independent bookstore. 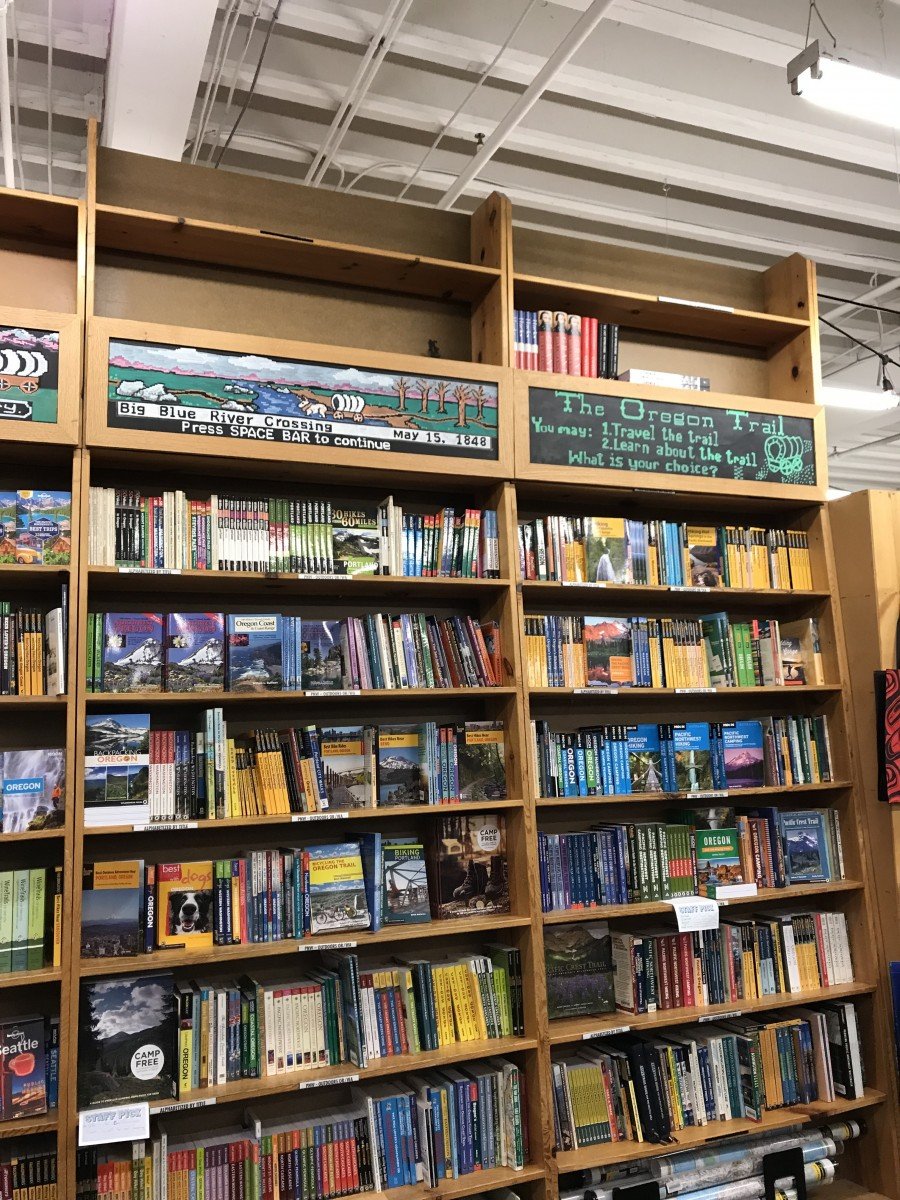 Even as I consume more of my reading material online and through audiobooks nowadays, it was an amazing sight to see books and books as far as the eye could see spanning three floors and 68,000 square feet of retail space.

It was a nice way to end the night before one of our friends retired to the hotel for the night. 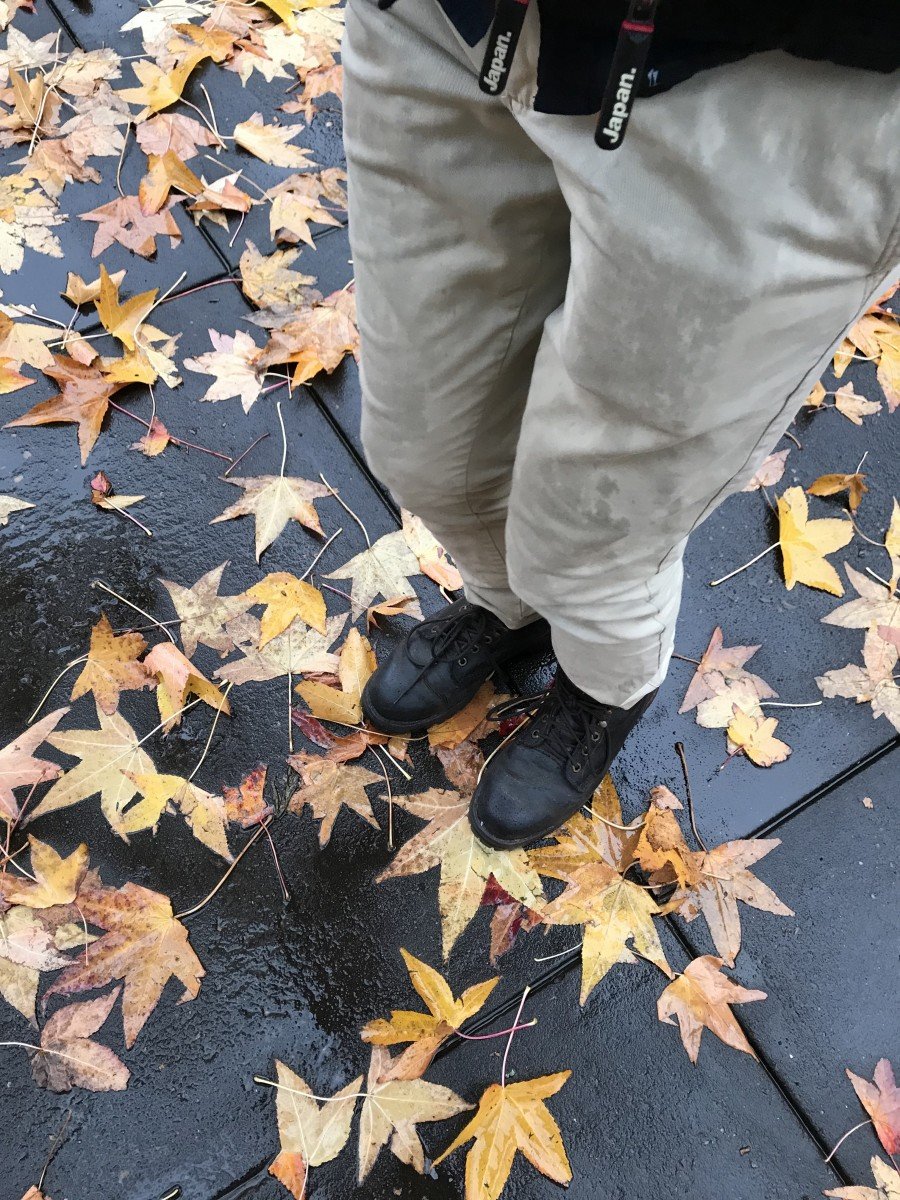 If you have one day to spend in The City of Roses, feel free to give this walking itinerary a try or to even mix a few stops with your own. Portland is a city I feel like I’ve just scratched the surface of. I can’t wait to go back to experience more of the weirdness the city has to offer.