Getting the Full Harry Potter Experience in Orlando, Florida

I’m not the biggest Harry Potter fan. I never read any of the books and maybe saw all of half a movie. Still, Harry Potter is such a big thing, culturally, that I feel like I know a decent amount about it.

For some of my friends, though, the world of Harry Potter is a thing to talk about for hours on end.

Consequently, when we found ourselves planning a trip to Walt Disney World, it was a no-brainer to take some of our time away from the Disney resort to check out the Wizarding World of Harry Potter at Universal Orlando. We were on a limited schedule so we only had one day to make the most of our Universal Harry Potter experience. 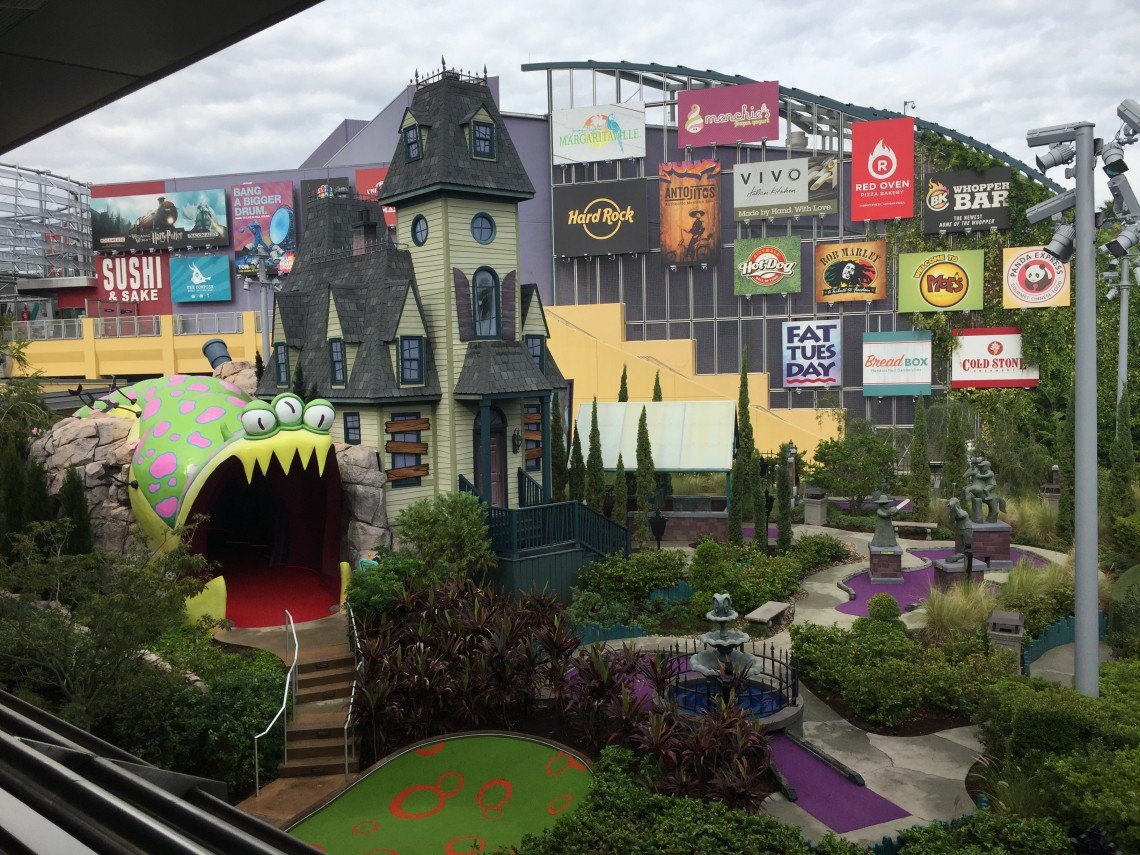 Our day started at the Guest and Ride Share Drop-Off where we were picked up and dropped off by our Lyft driver.

As I had never been through Universal Citywalk in Orlando, it was fun to see all the stores along the way to the entrance to Universal Studios Orlando. 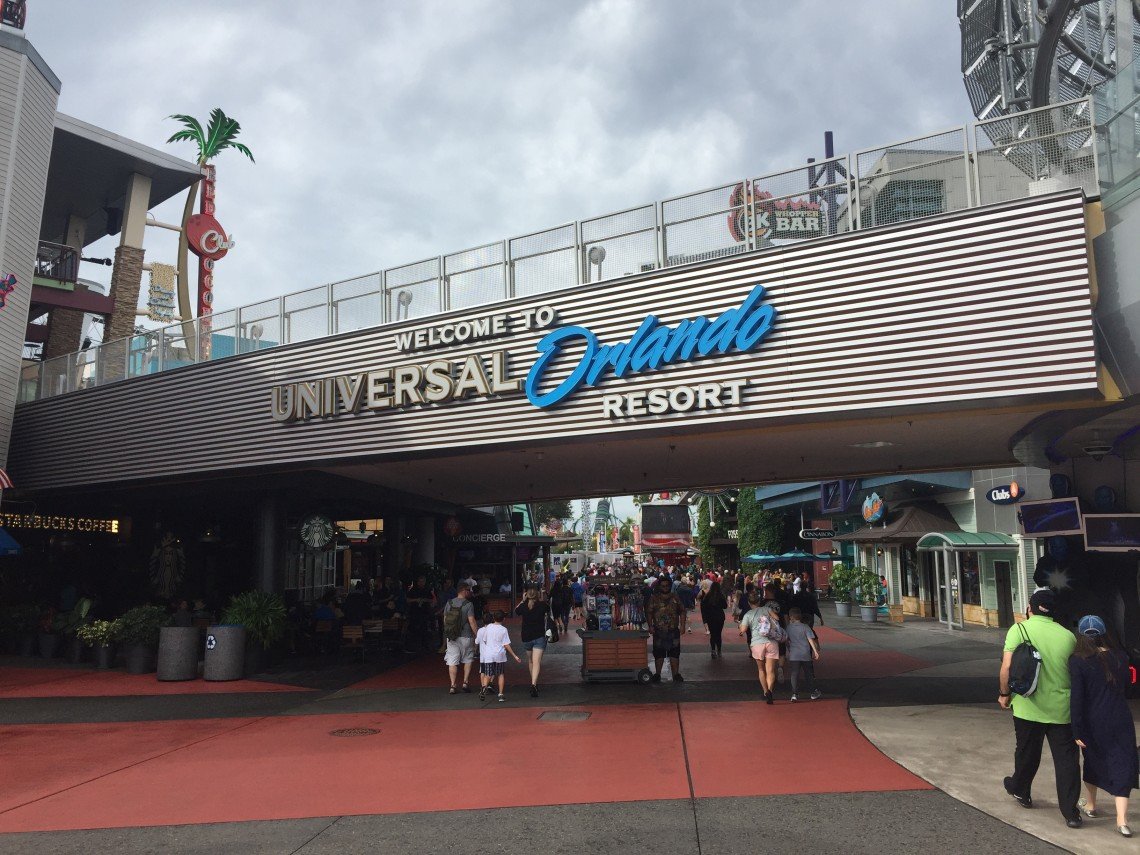 It had previously rained and the weather called for on and off showers, hence the wet floor. 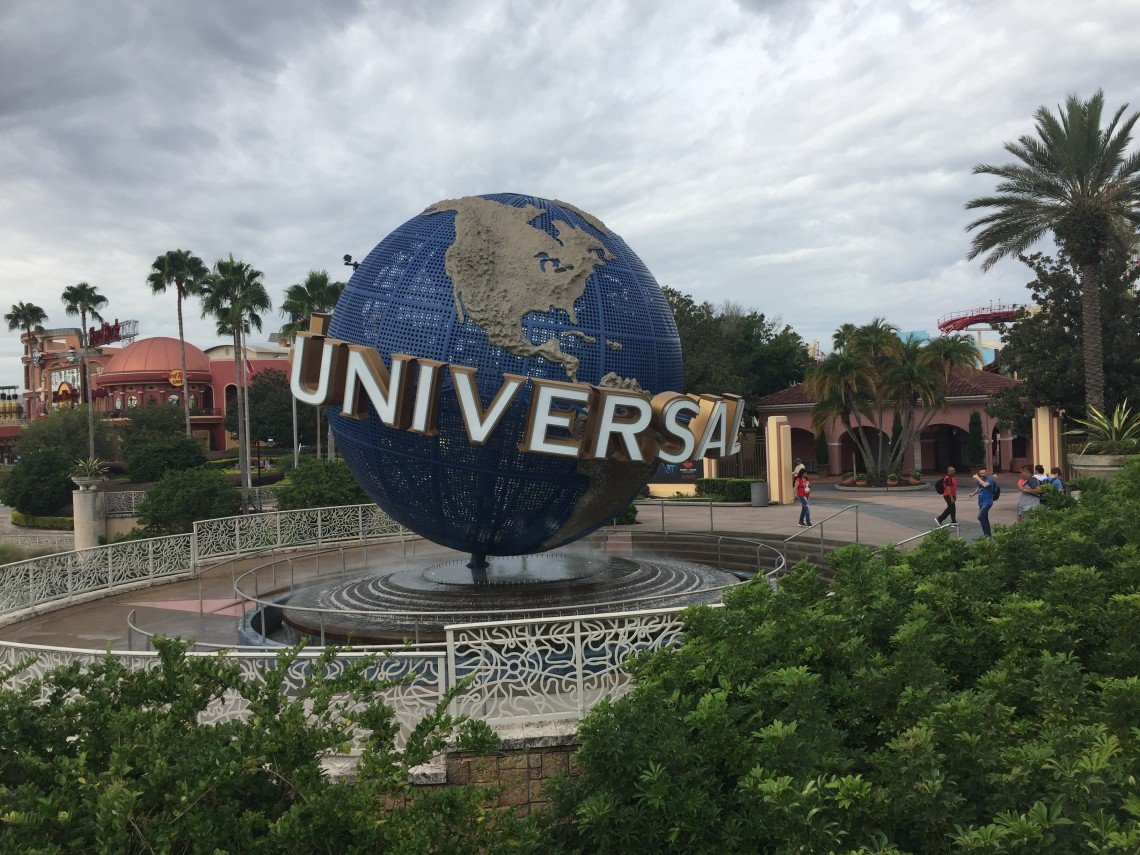 After taking a picture with the iconic globe, we were on our way into the park. 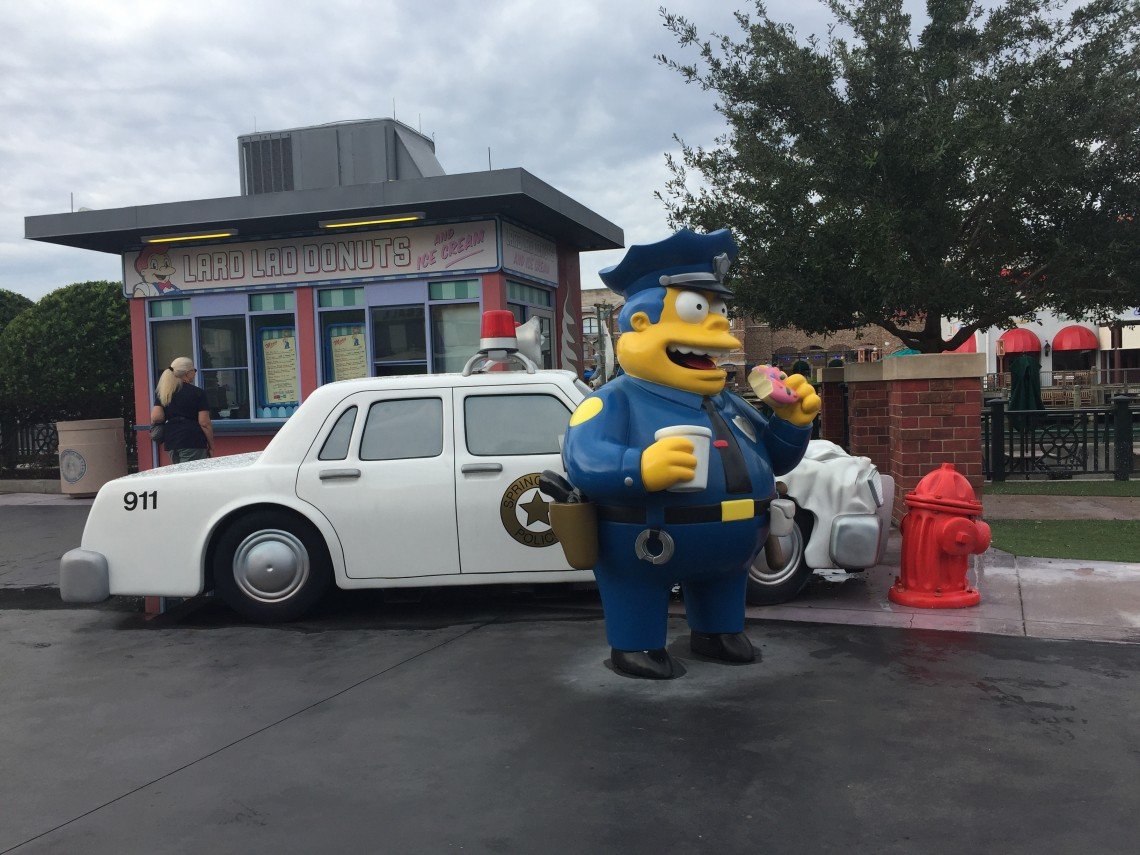 As we were on a time crunch to make the most of our park hopper, we basically raced past all of the other offers in Universal Studio to get to the London (Diagon Alley) part of the park. 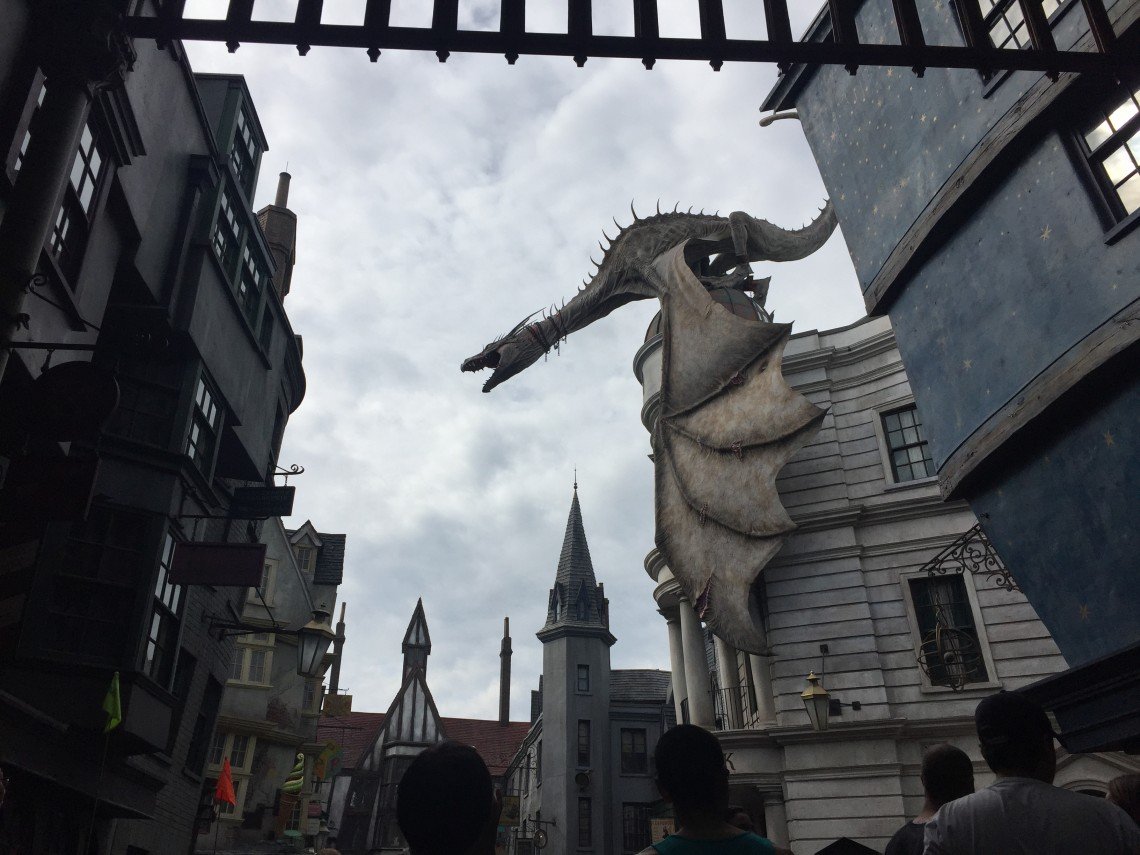 After passing through a nondescript passage, there we were. The dragon atop Gringotts let us know not only where we were, but who was in charge. To make things even cooler, right when we got in, the dragon was coughing up a firestorm.

After “ooohs” and “ahhhs,” we made our way into the queue for Harry Potter and the Escape from Gringotts. 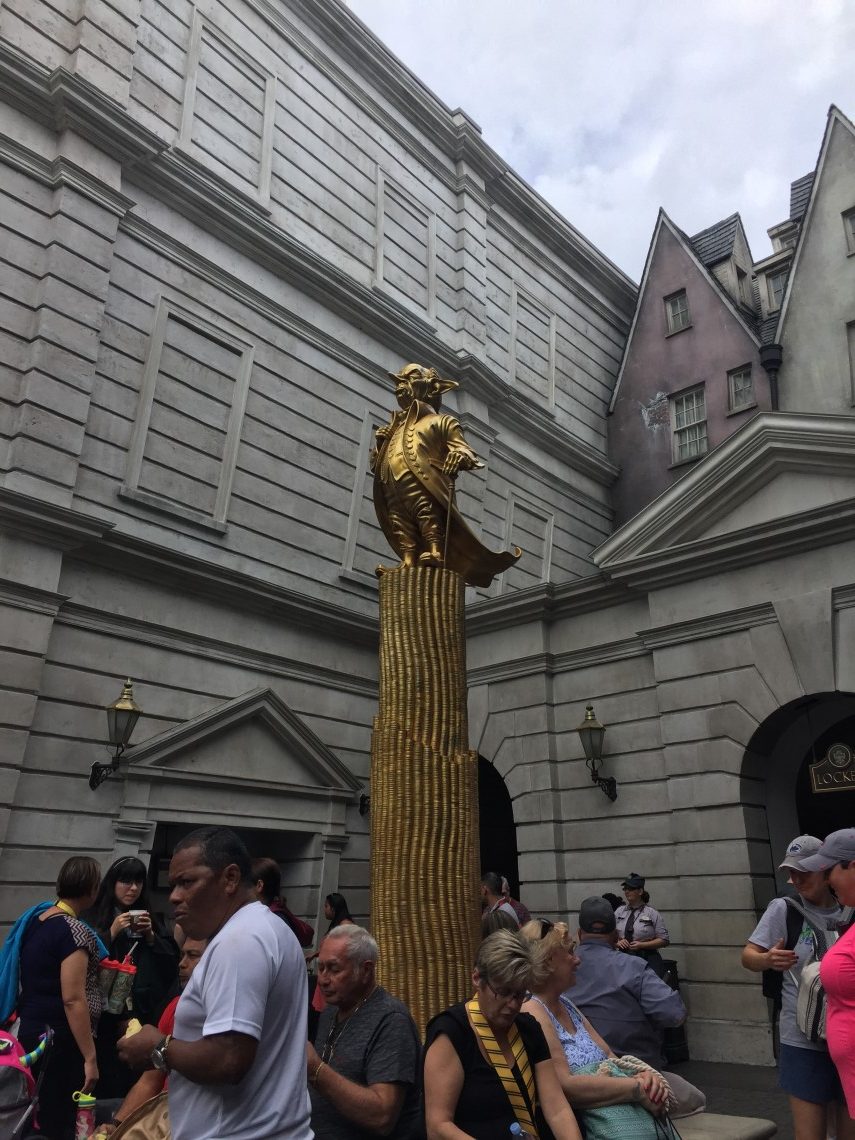 I had never been to this part of the Wizarding World of Harry Potter, so I was taking in all the sights and sounds.

Like its counterpart in Hogsmeade at Islands of Adventure, Escape from Gringotts is a well done attraction. Both from how the line is executed to the ride system, I was quite pleased with the experience from beginning to end.

After going through Gringotts, we headed to The Leaky Cauldron for some grub. 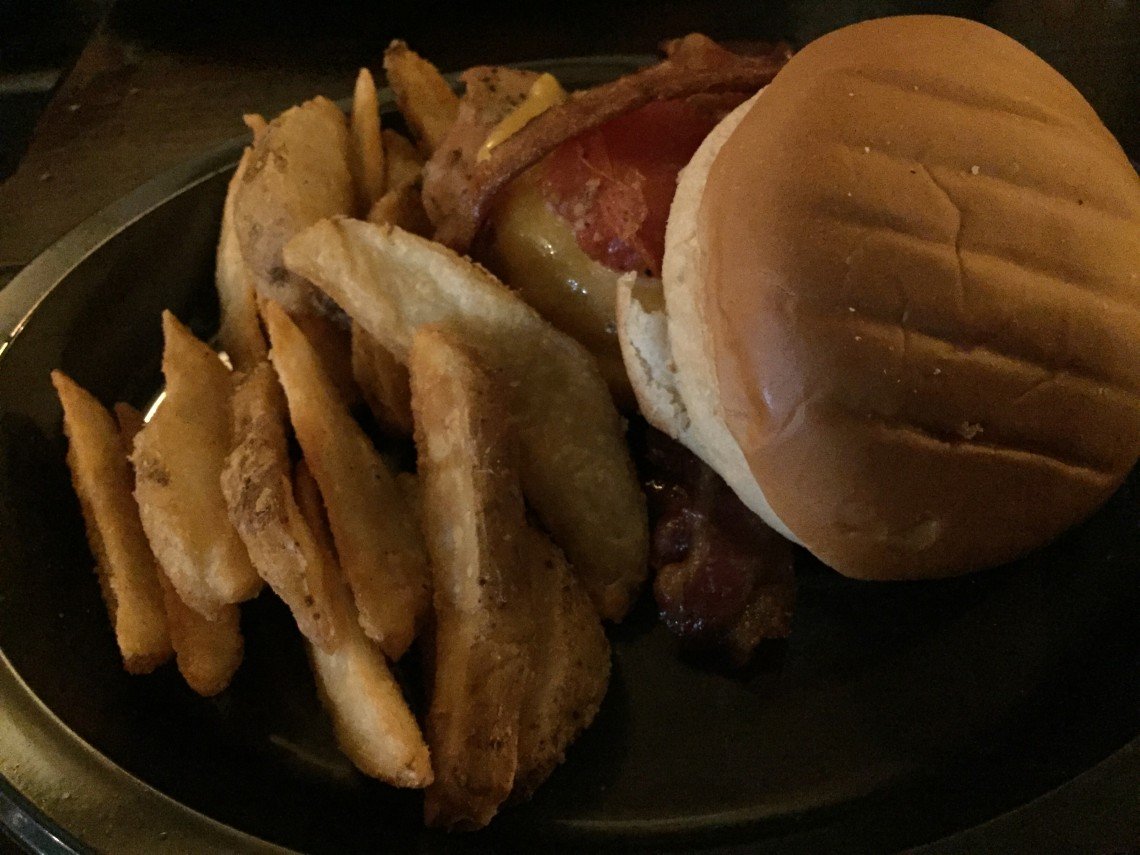 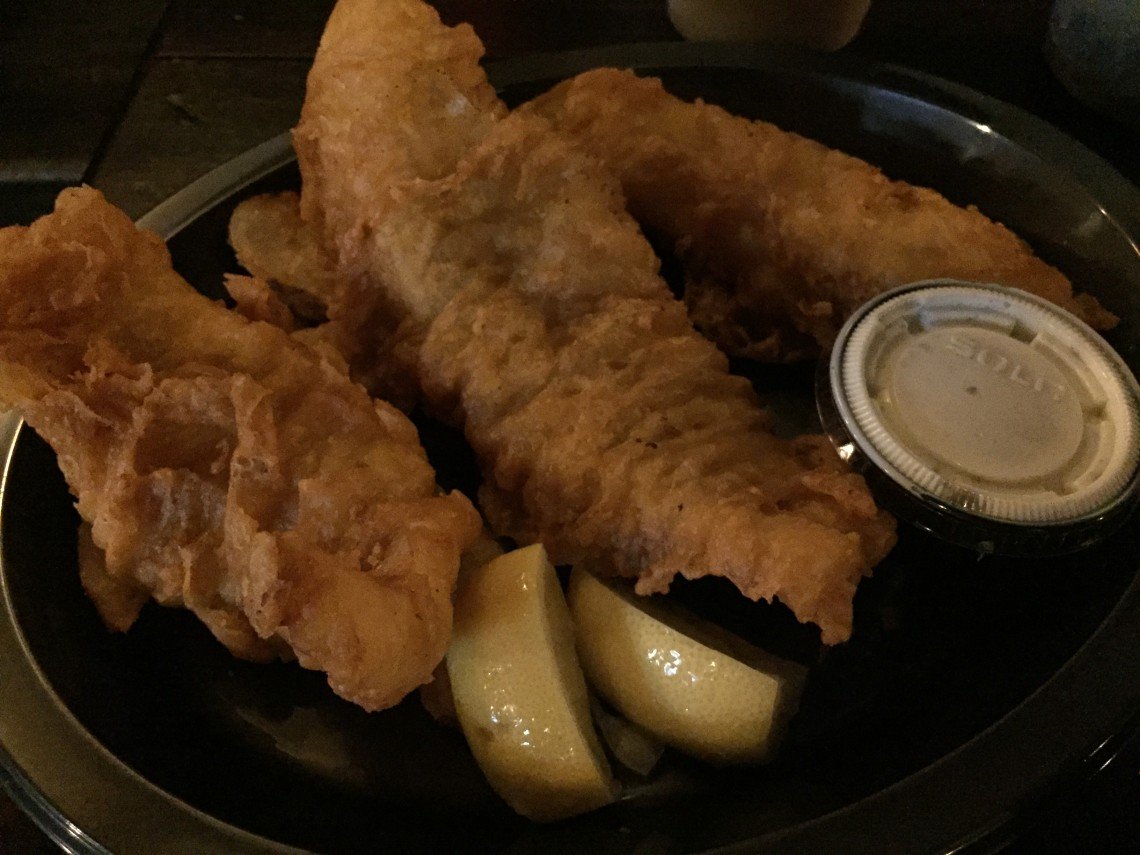 On the menu for lunch was a hamburger with fries and fish and chips (how could we not, when in London). 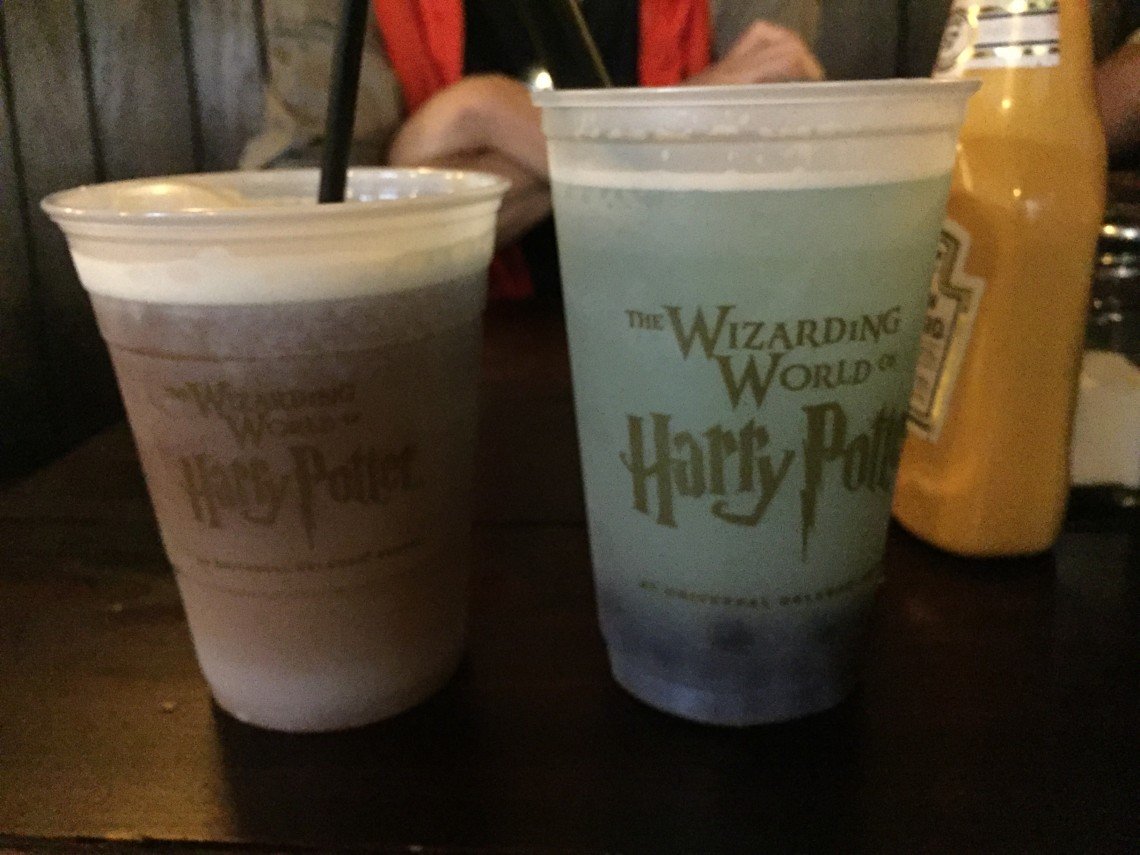 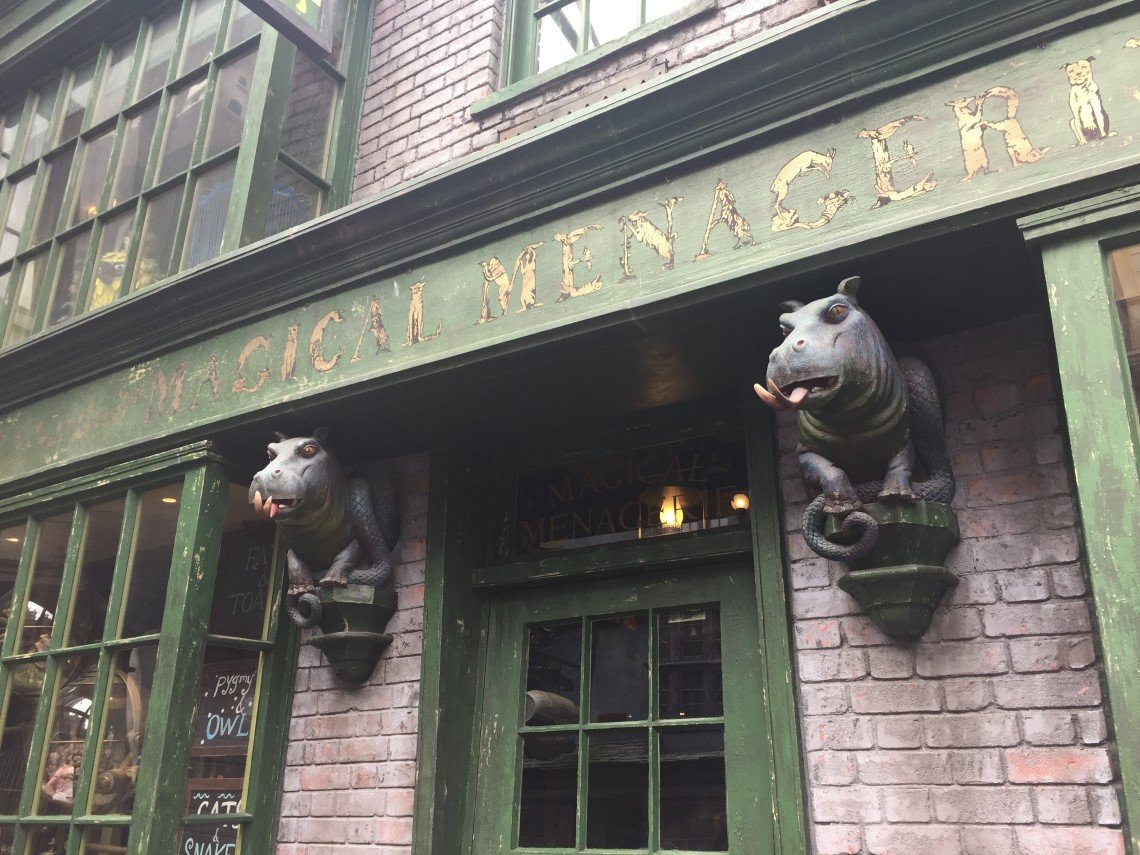 After lunch, we did a little shopping around the streets of Diagon Alley. I was in awe at the attention to detail and the story that they incorporated into the land. 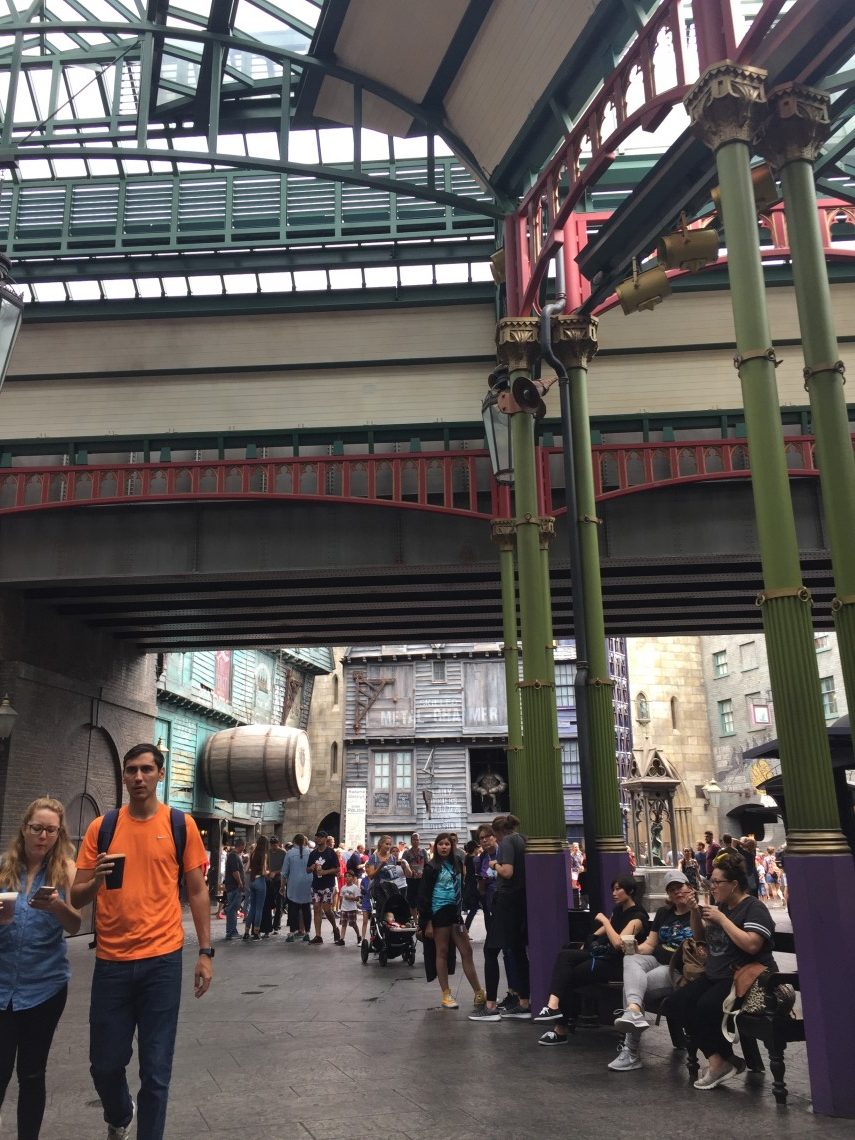 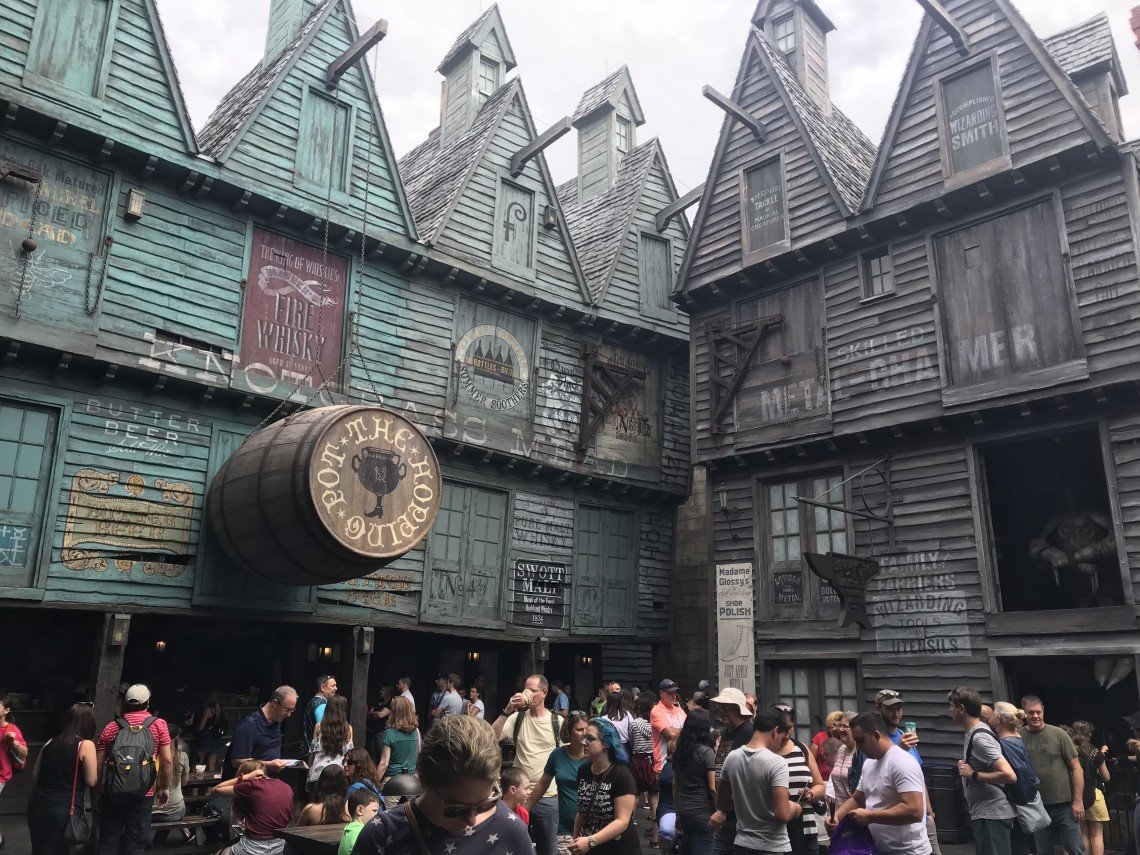 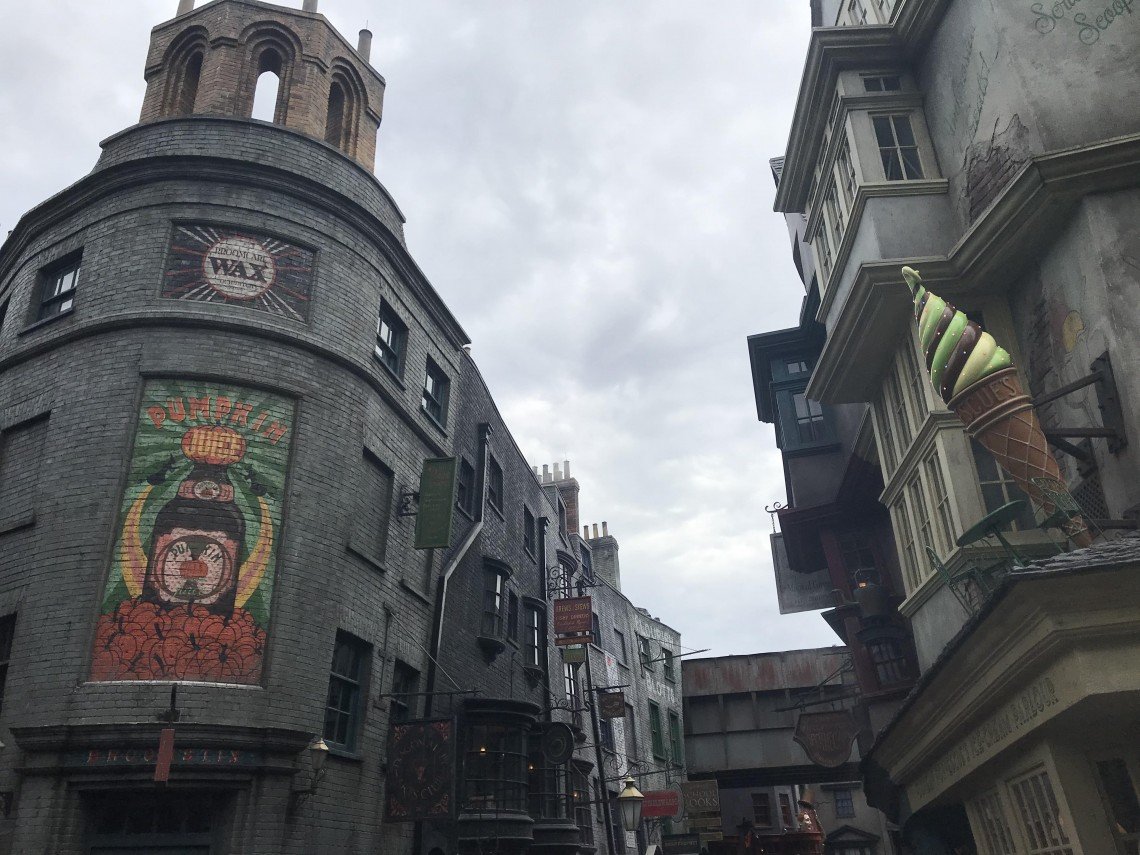 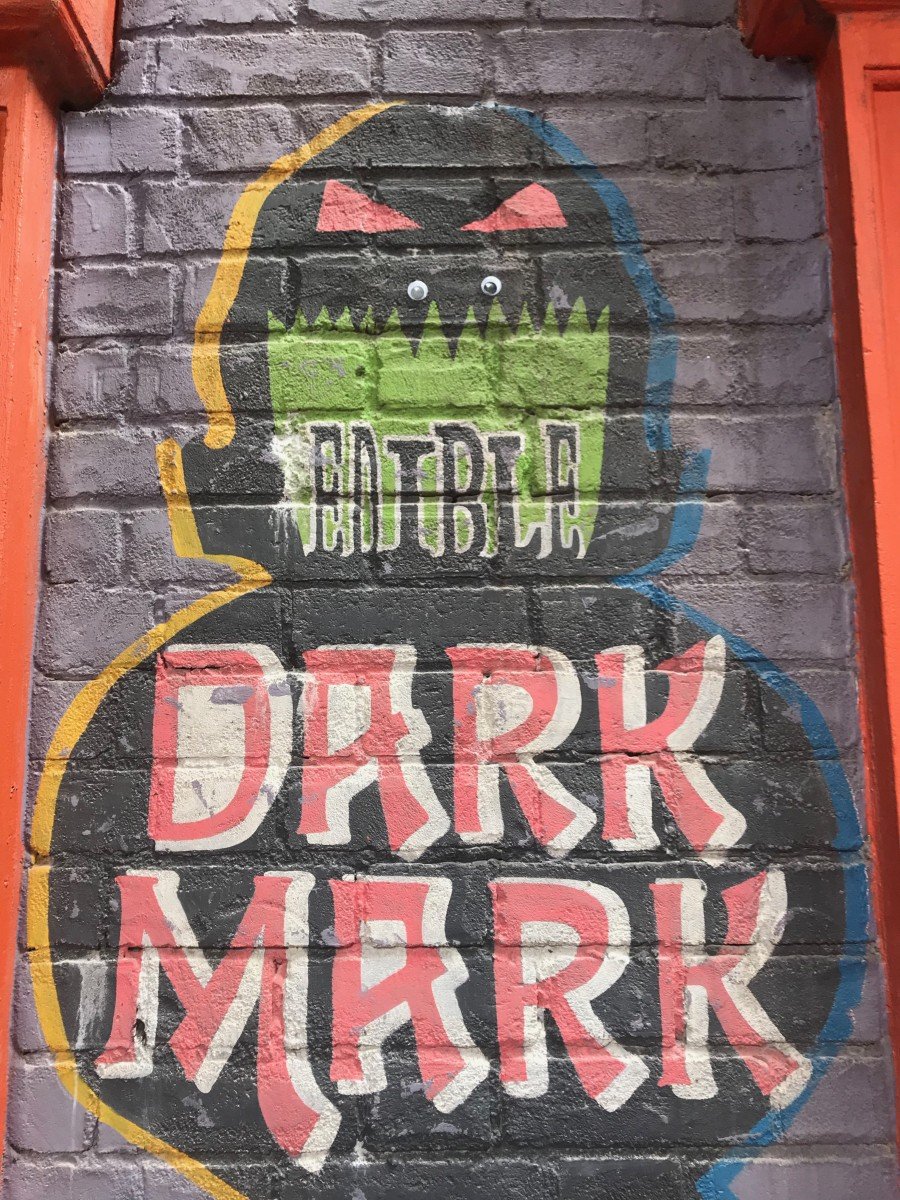 While waiting outside for friends to shop, it was fun watching people running around with their magical wands causing all kinds of mischief. 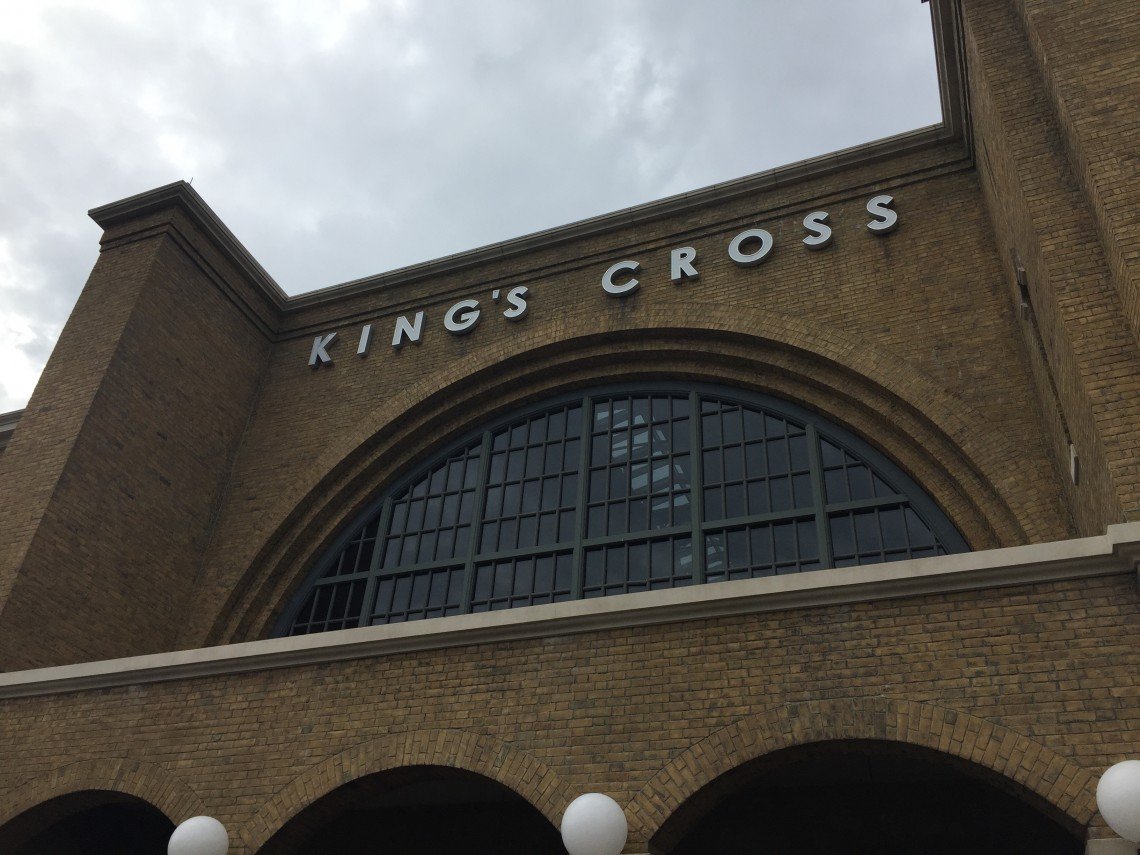 Ready to head to Hogsmeade, by way of Kings Cross, we headed to the train station. 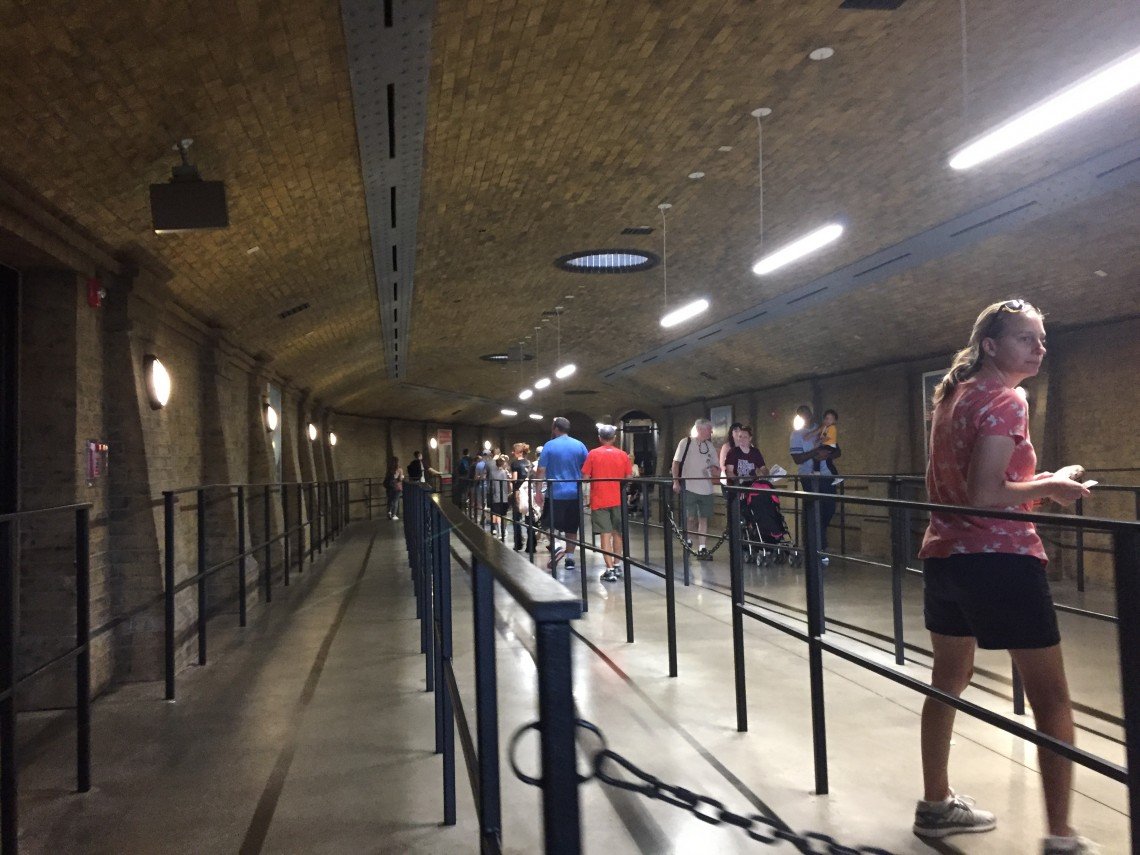 I’ve never been to London, but there’s something about the queue design (and even the street performer out front) that made the experience of getting on Hogwarts Express quite pleasant.

With a quick jump through a wall, we found ourselves in front of Hogwarts Express ready to head to Hogsmeade.

We shared a train car with a couple. As the train left the station, it was cool looking out the window to see the countryside moving in sync with the train. The ride was magical and more interesting than I expected.

Almost as quickly as it began, we had made our way to Hogsmeade in Islands of Adventure Park. 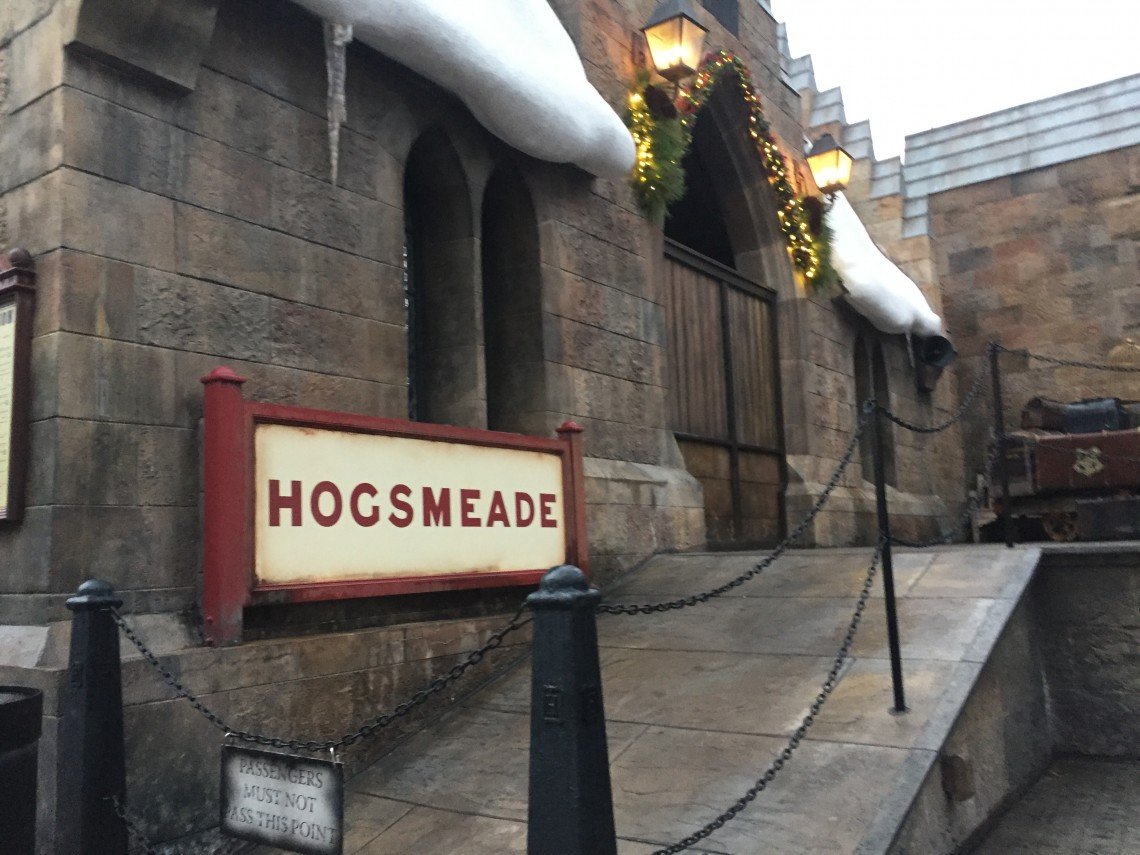 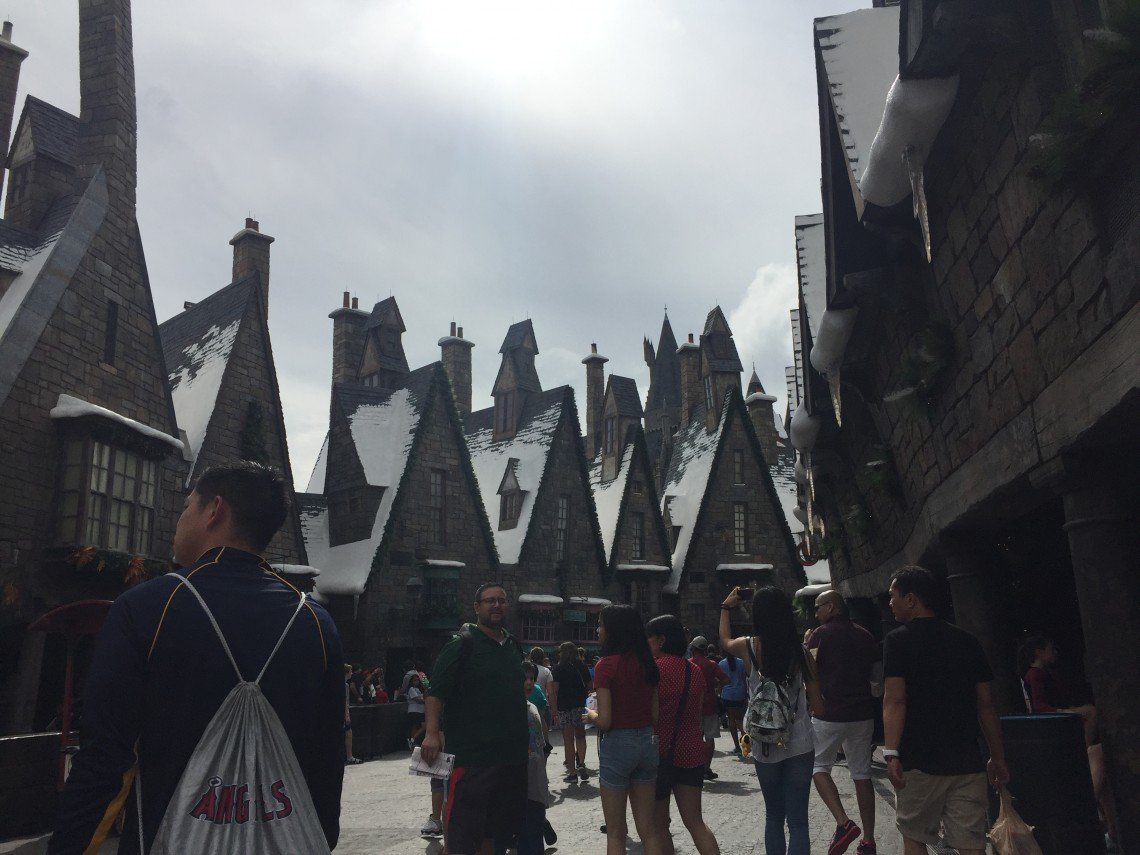 As it was almost winter, snow covered the steep roofs in the town. Oddly enough, it was so humid and hot we didn’t notice the snow. 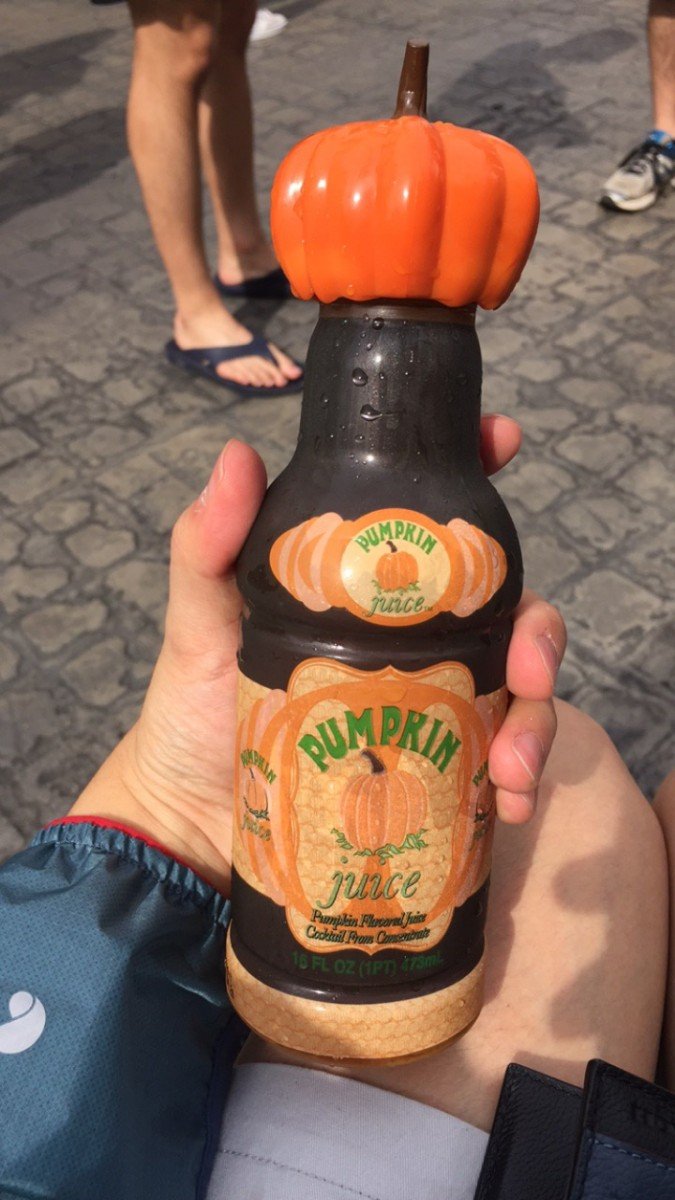 In fact, we decided to get Pumpkin Juice to quench our thirst under the hot Floridian sun. 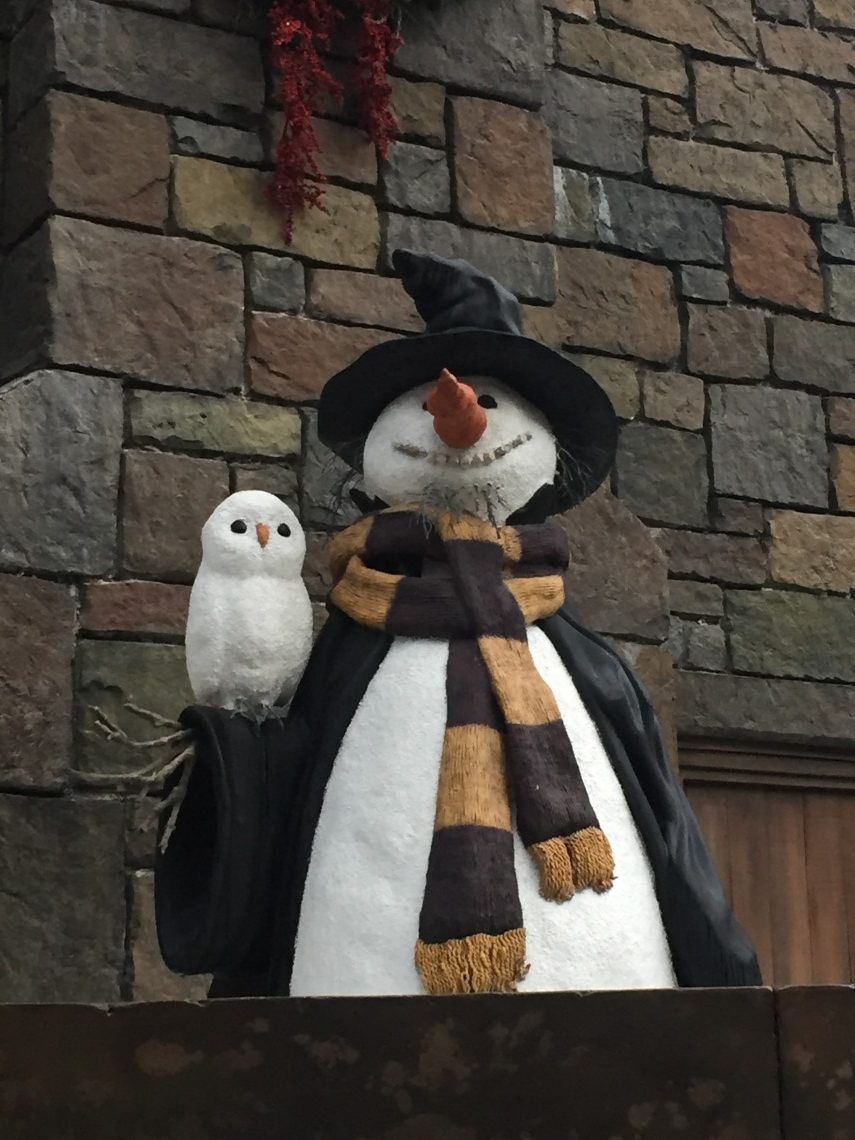 Of course a Hufflepuff would have made this snowman.

It was fun seeing this part of the park in its winter overlay. 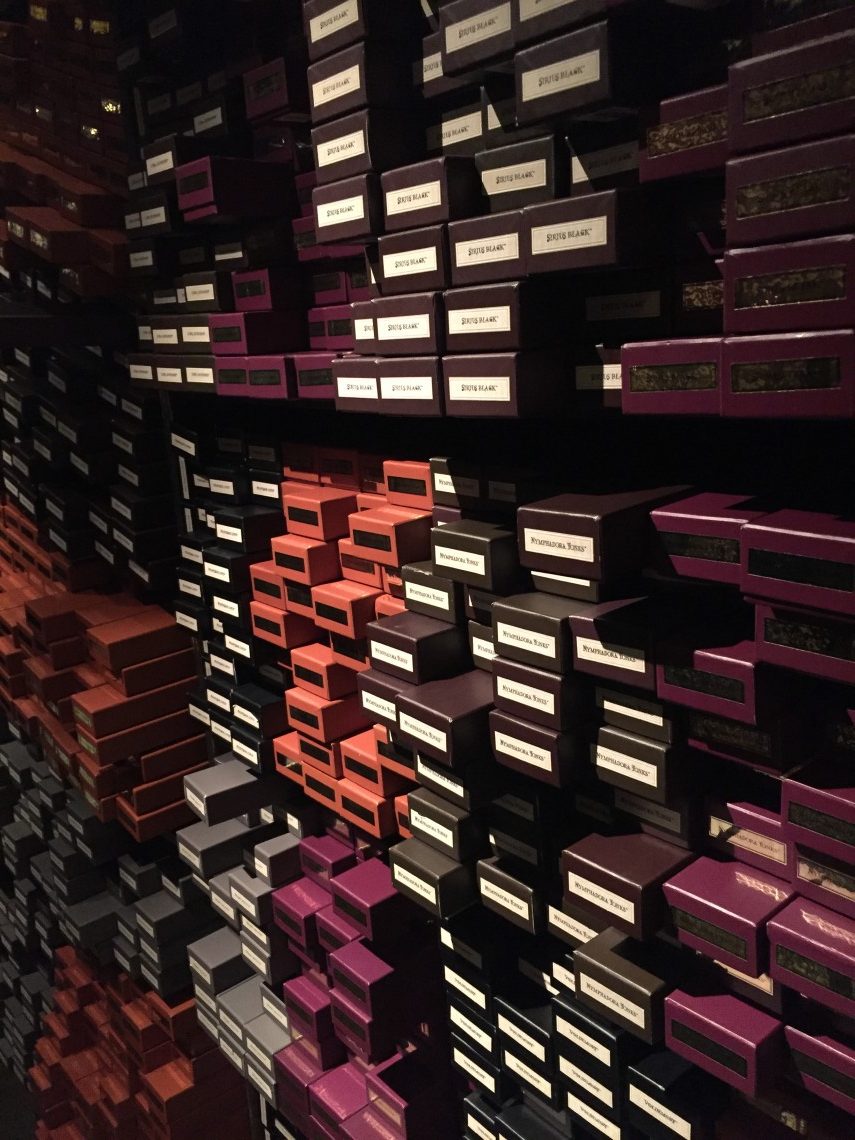 Before getting on one of my favorite rides, Harry Potter and the Forbidden Journey, we stopped by Ollivanders Wand Shop to check out his wares. There wasn’t any wand that really spoke to any of us, so we quickly proceeded onward. 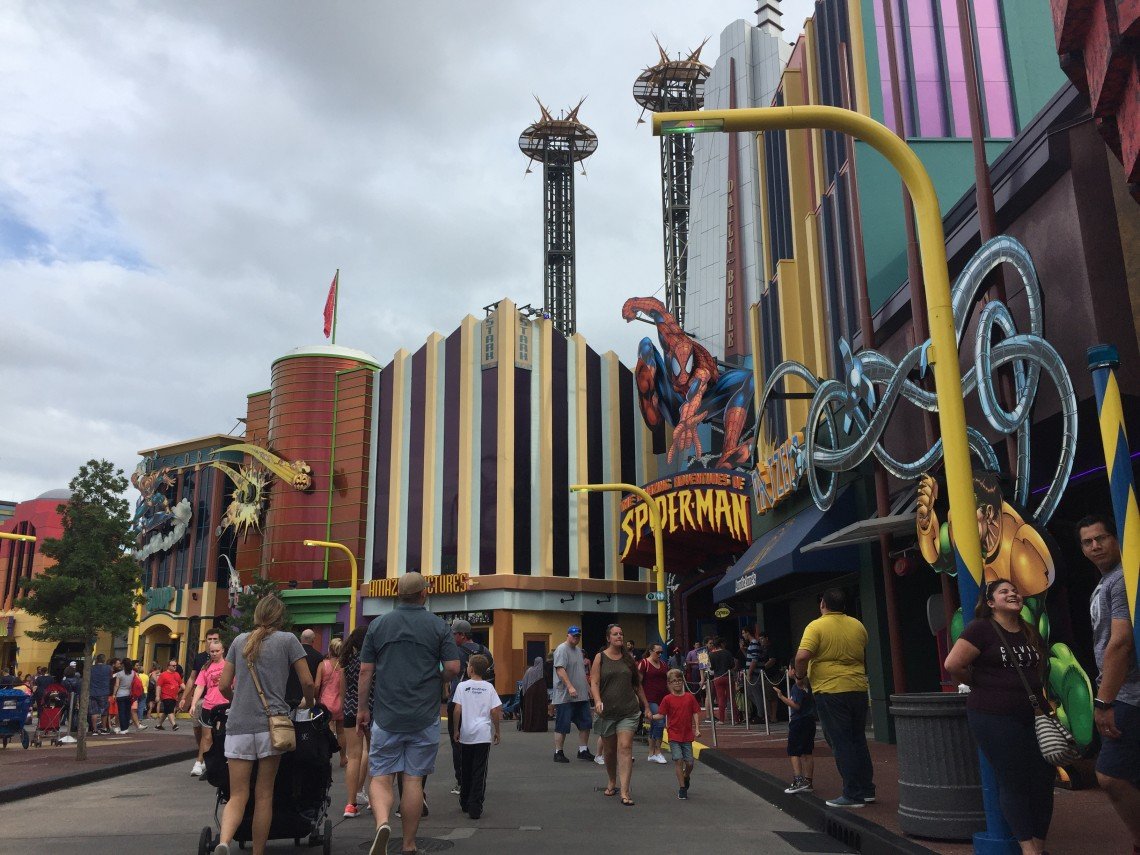 We walked counter-clockwise from Hogsmeade through Jurassic Park and Skull Island. Due to our limited amount of time, we made a beeline to one of my favorite water rides, Popeye and Bluto’s Bilge-Rat Barges.

If you’ve never been on this ride, and it’s a hot day, I would highly recommend checking it out. You will get wet and you will, most likely, get soaked.

Soaked like we decided to take a shower while fully-clothed, we headed to Marvel Super Hero Island where we hopped on The Incredible Hulk coaster. Due to thunderstorms predicted, there was a period of around twenty minutes where the ride was grounded. Once the crew members got the okay to operate the ride, we were off and flying with Hulk through the skies of Orlando. 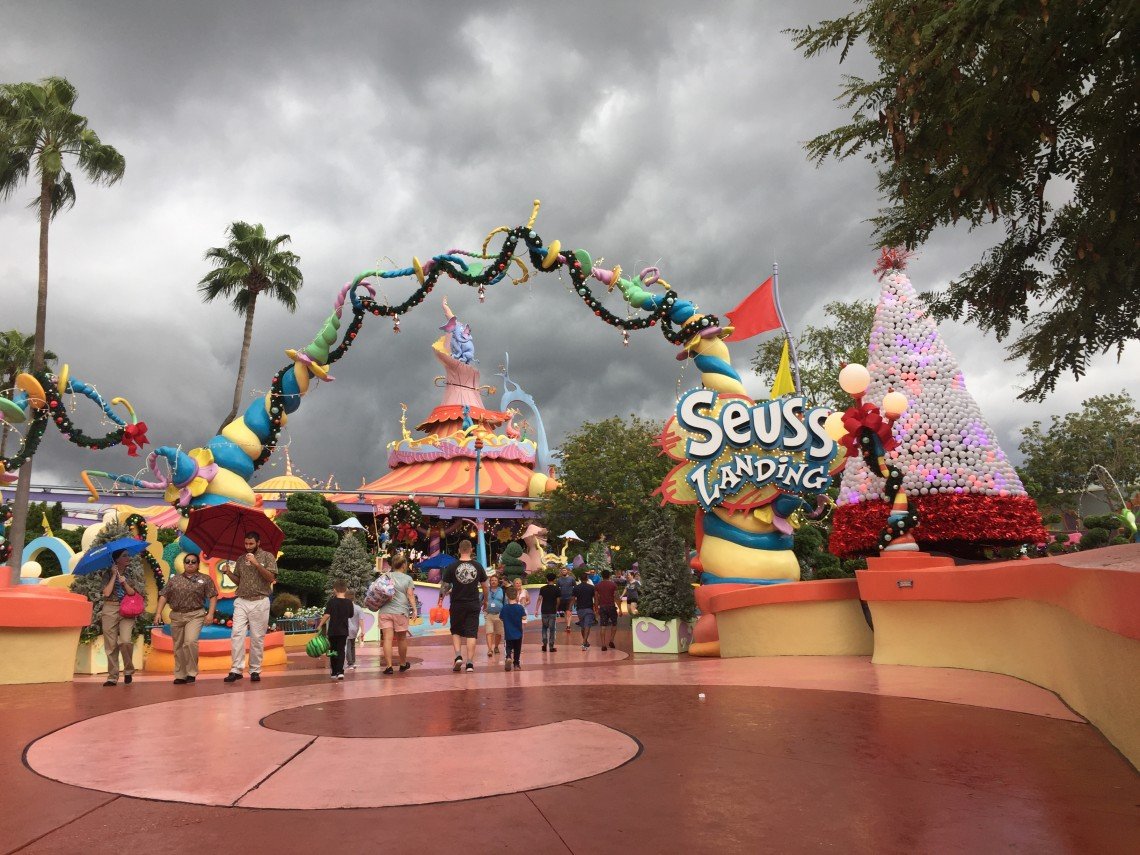 Much drier, at this point, we headed to Seuss Landing to check out The Cat in the Hat (which was freezing—due to us still being damp) and One Fish, Two Fish, Red Fish, Blue Fish. 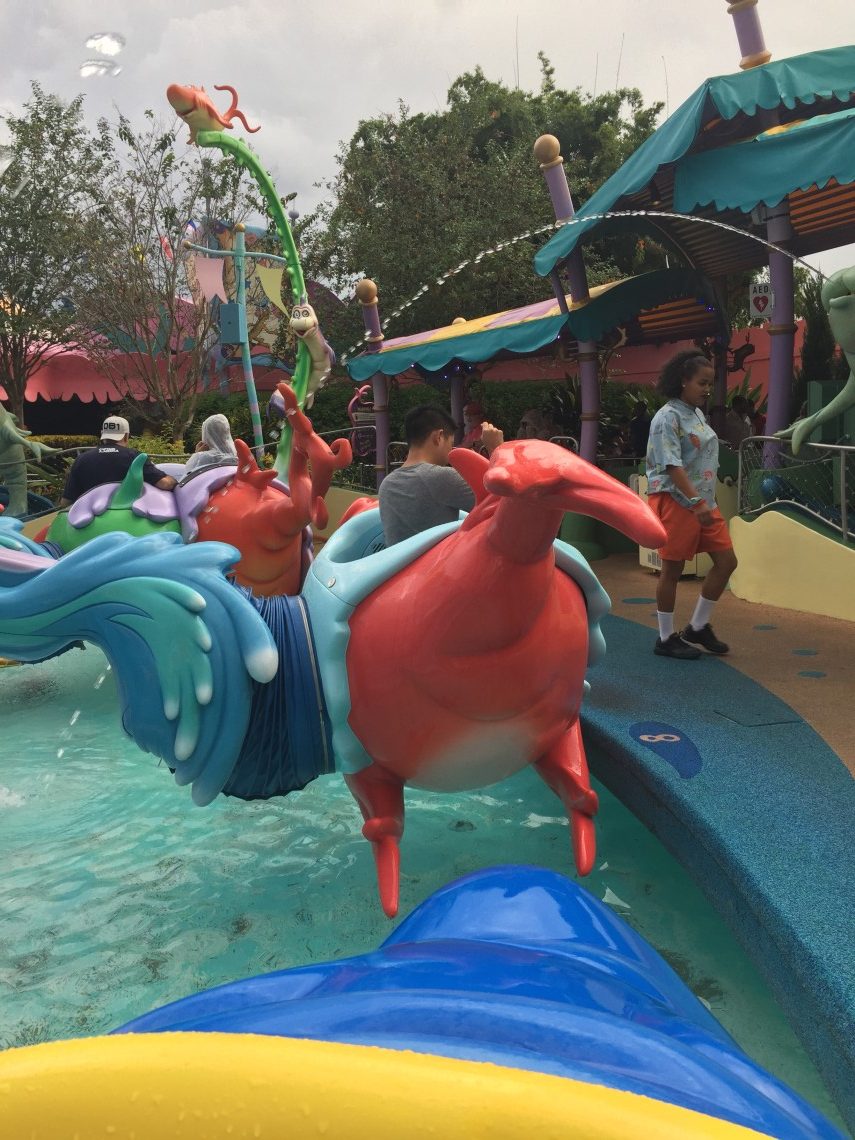 The latter is a fun little ride where you have to coordinate with the song in order to not get wet. 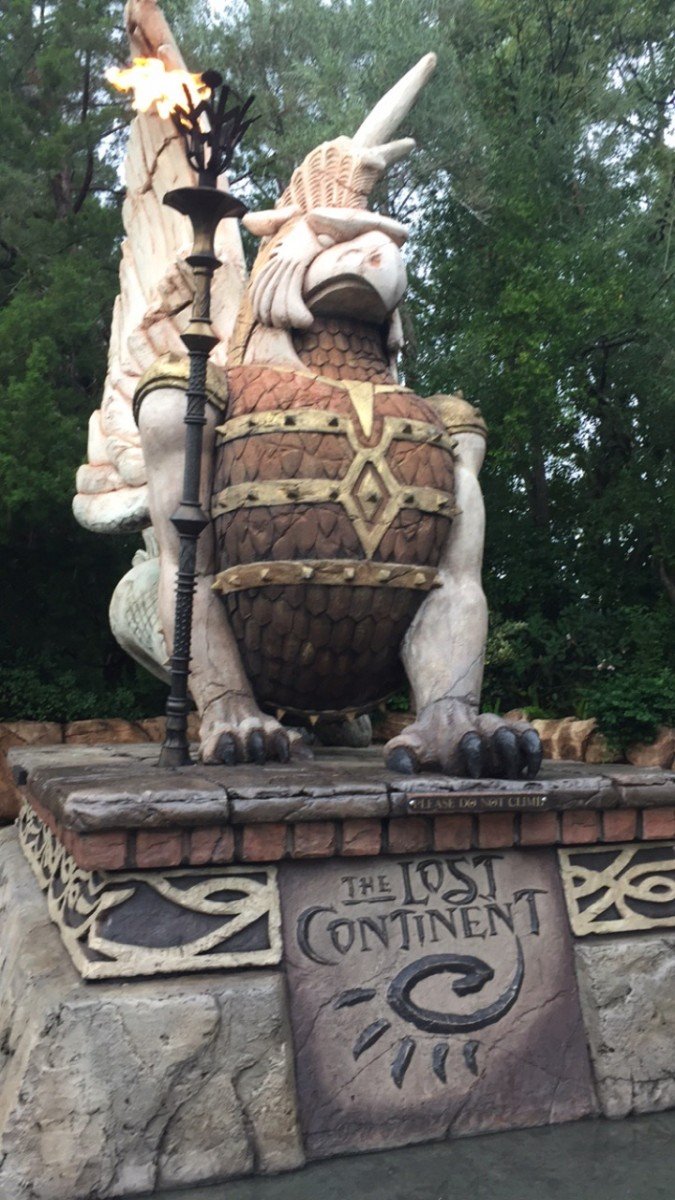 Out of all the attractions I’ve been on at Universal Studios Islands of Adventure, Poseidon’s Fury in The Lost Continent is by far the weirdest. Just when you think things can’t get any weirder, you’ll be wondering how Magneto made his way into the show.

Making the loop around Islands of Adventure, we hopped back on Hogwarts Express to Diagon Alley.

Where I expected a similar story, I was pleasantly surprised that the experience going to Diagon Alley was different than it was going back. If you’re a true Harry Potter fan, don’t forget to ride the train back to wherever it is that you started. 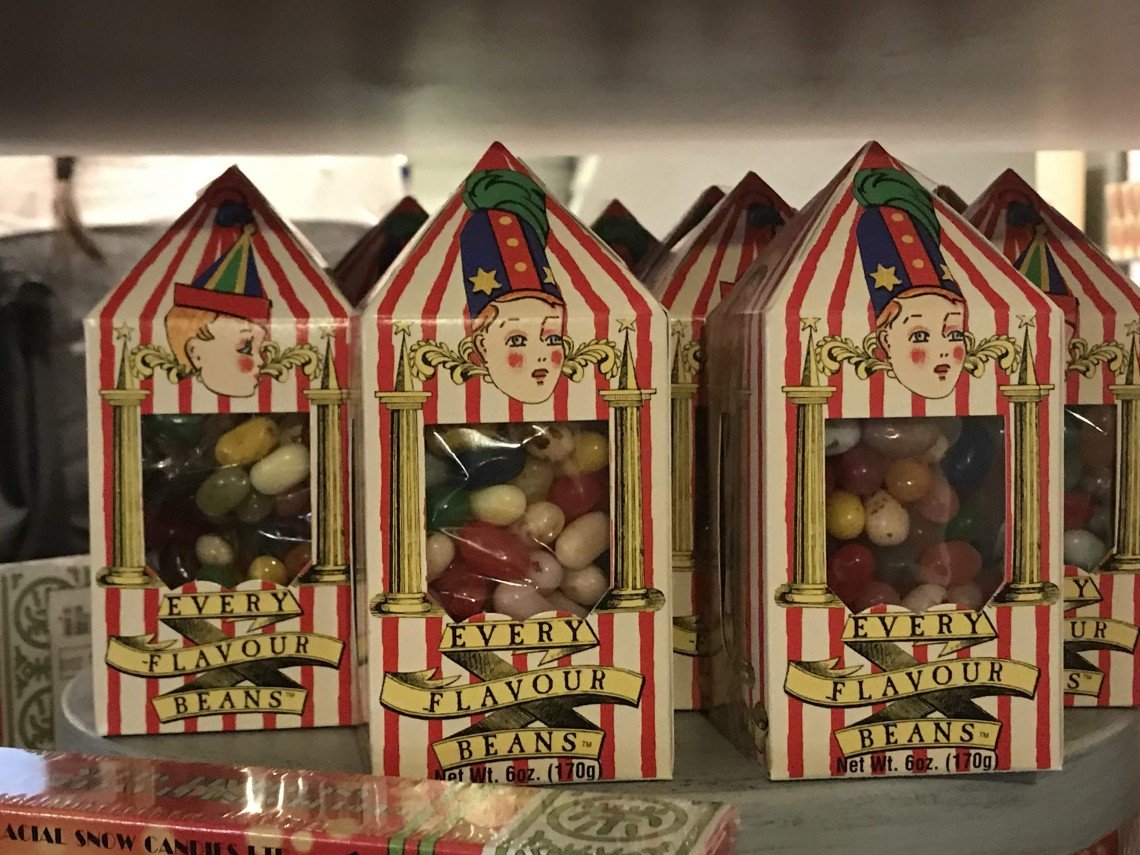 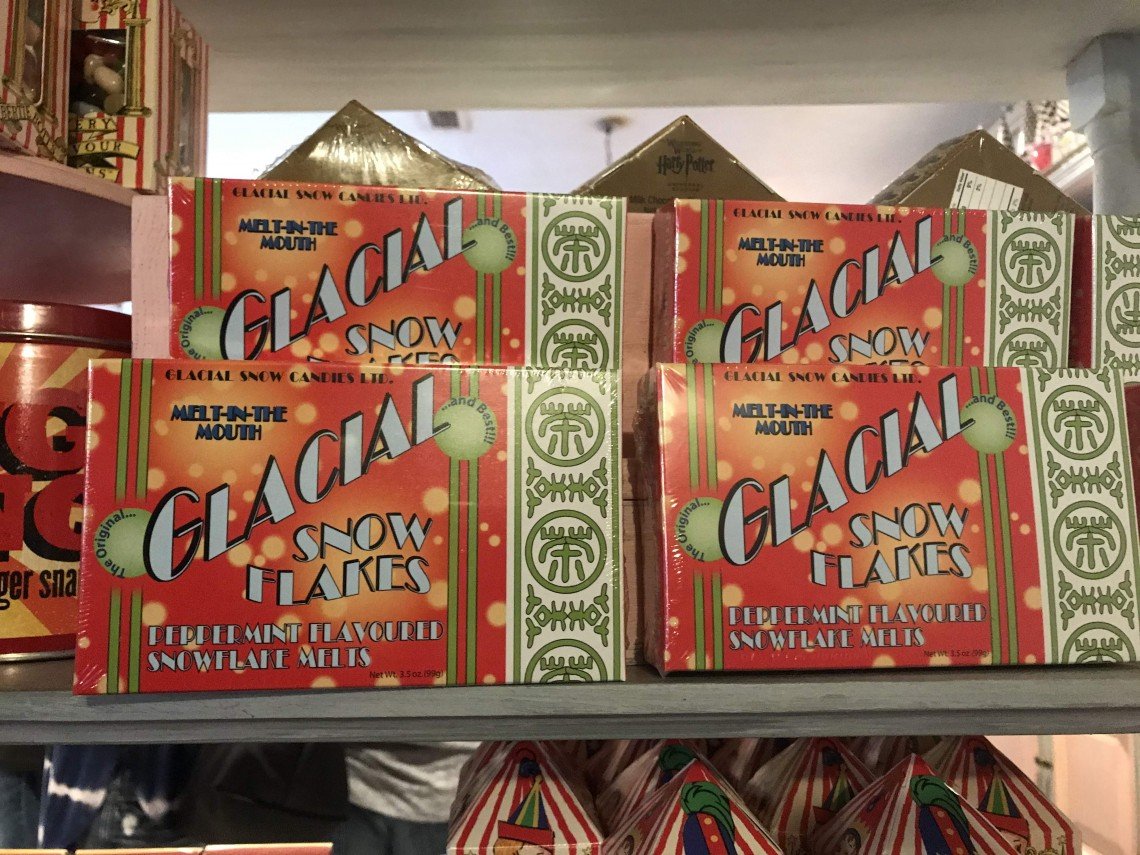 Because we hadn’t actually purchased anything from the stores, my friends went around to buy souvenirs. I was particularly entranced by the attention to detail on much of the packaging. I’m sure for Harry Potter fans there’s more to it than meets the eye. For me, I was simply struck by the world that individual things, like these candy boxes, helped to create. 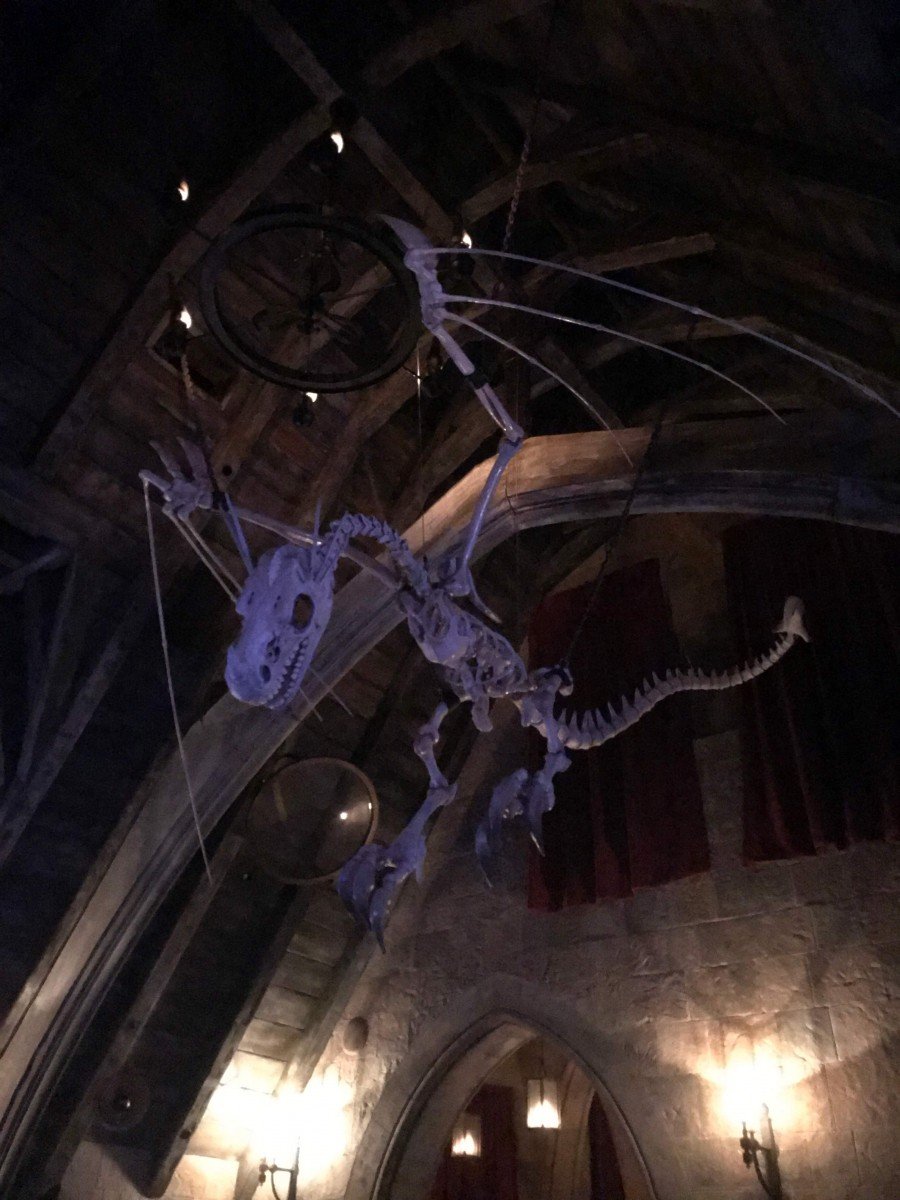 Diagon Alley is also cool in terms of how there are hidden details in the nooks and crannies of the locale. Loved seeing finding this dragon, for instance. 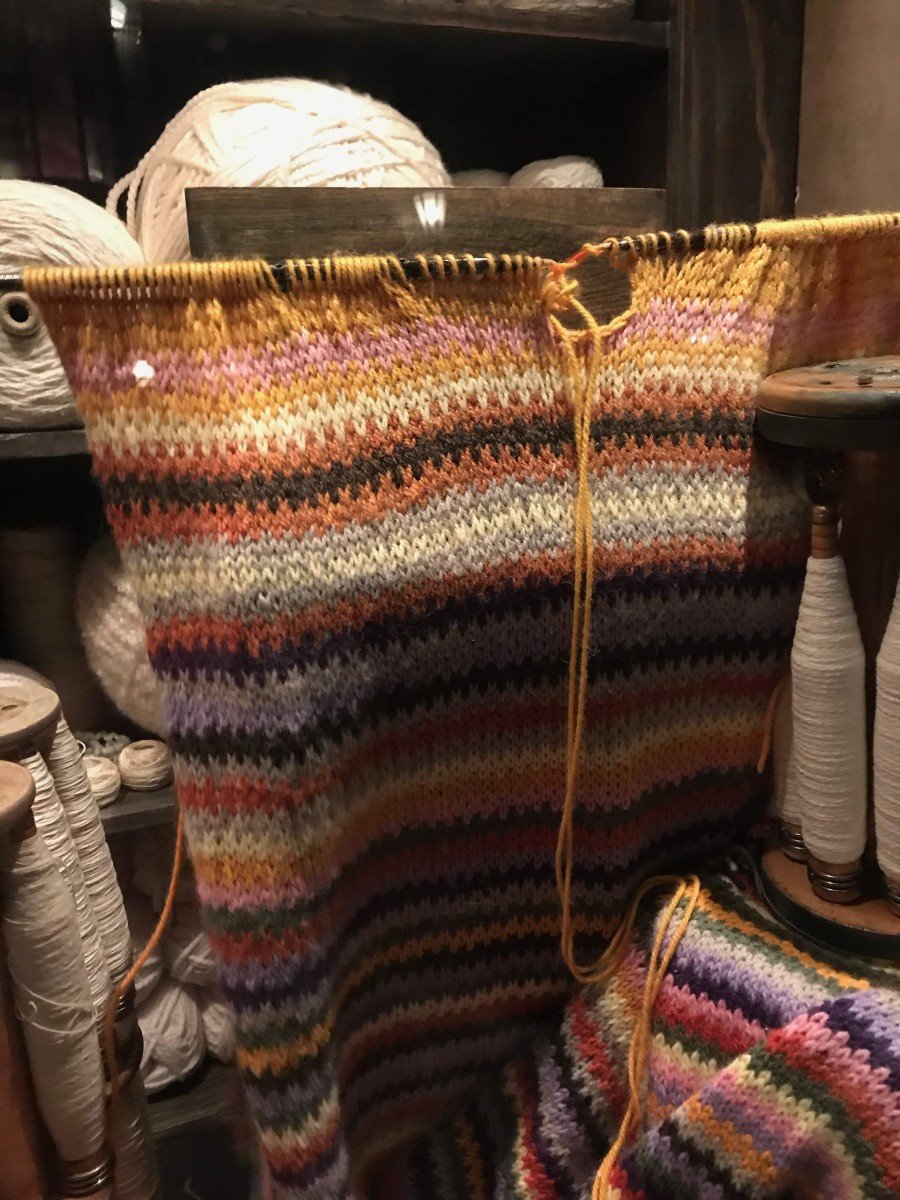 If I had self-knitting needles, I wonder what I would make.

We basically shopped around until it was time to check out Universal Orlando’s Cinematic Celebration. Cinematic Celebration is a World of Color-esque show that, though cool, didn’t match the level of quality that I would expect from Disney. Much like the rest of the park, it felt kind of bland.

For having never been to Universal Studios Orlando, there isn’t much of a draw for me except for Diagon Alley. Diagon Alley really elevates what it means to be a land in a theme park. Linked with Hogmeade through Hogwarts Express, Universal Studios does a great job at creating an immersive Harry Potter experience. It’s one that, seemed to speak to my Harry Potter friends at every twist and turn.

If you’re planning on doing the one-day park hopper (park-to-park), it can be a huge investment at over $150. Is it worth it? If you’re not a Harry Potter fan or don’t have friends you care about who love Harry Potter, then you may want to pass. Until there are newer attractions, you’re better spending your money with The Mouse.