Getting Lost in the Simple Beauty of North Shore

Oahu is full of wonder.

From the warm, scenic waters of Waikiki to the breathtaking serenity of Manoa Valley, there’s beauty enough down in southern part of the island. Take a trip up H2 to the northern part of Oahu—an area called North Shore—and you’ll find even more to see and muse about.

Here’s a recap of my journey to North Shore, through Koolauloa, and Koolaupoko. 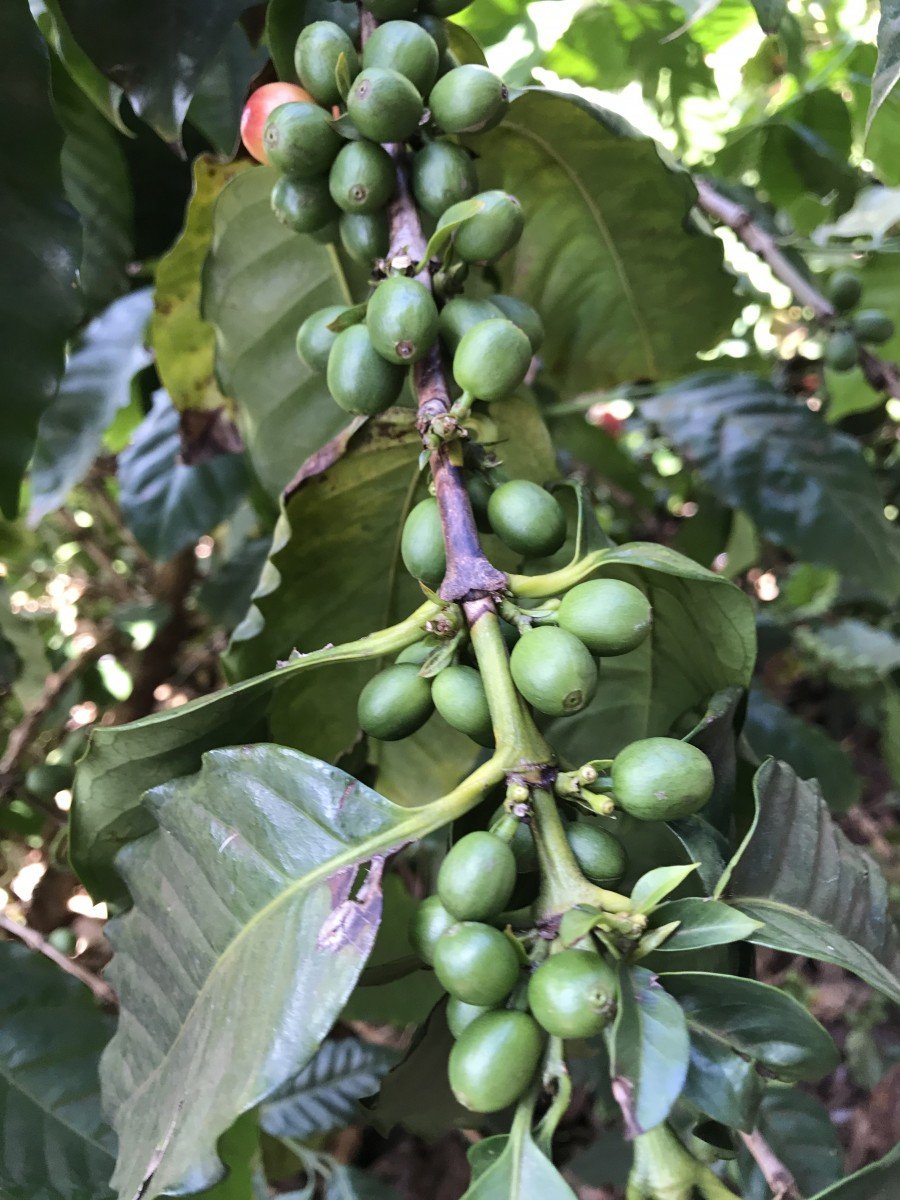 After enjoying the best saimin in Oahu, we made our way north to a local coffee farm.

Green World Farms is Oahu’s first coffee farm with visitors. They have a main building that is part cafe and part gift shop/museum. I loved seeing how coffee makes its progression from bean flower to roasted bean. 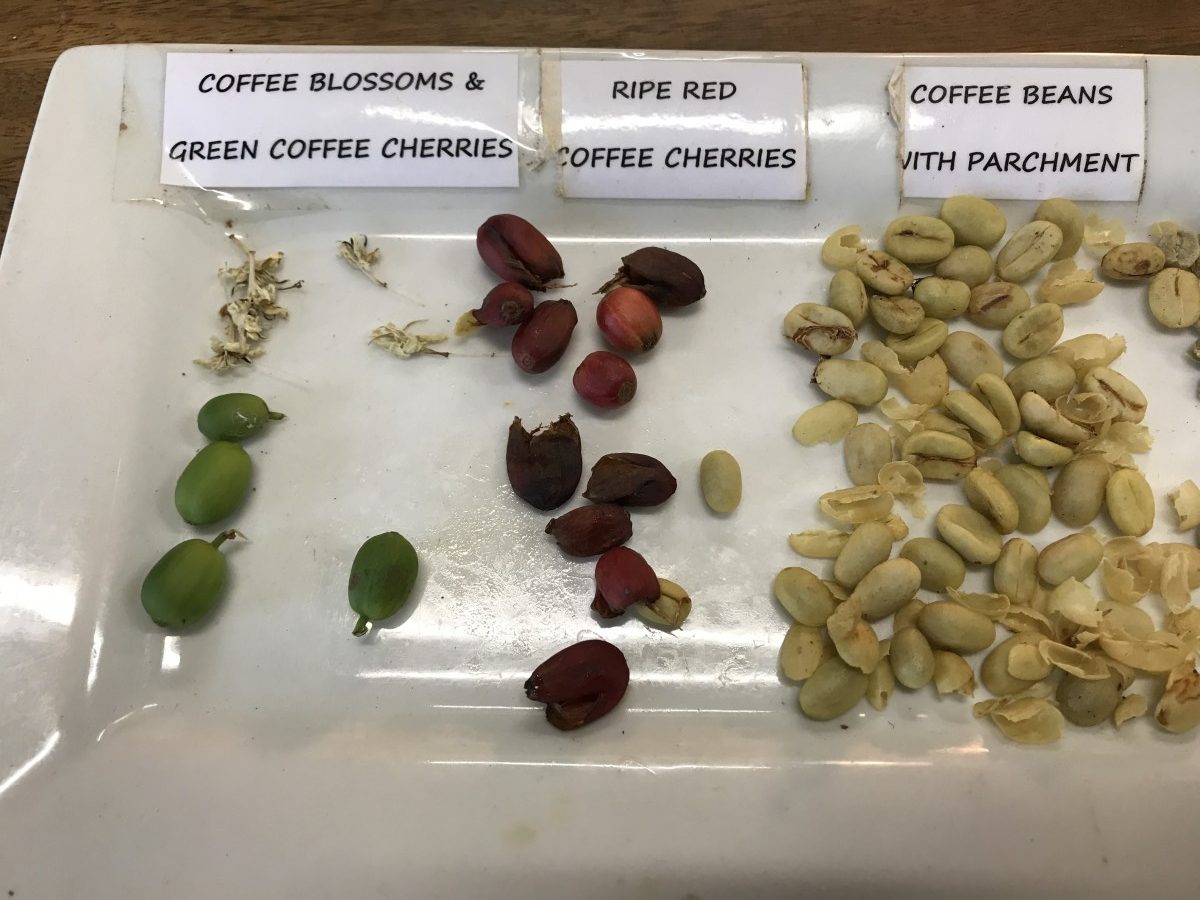 I never knew about these various steps in between, nor the fact that the beans with the fruit on them are called cherries.

Outside, in addition to random chicken wandering about, there are rows and rows of coffee bean plants. You can take a self-guided tour through the coffee garden to learn how the coffee gets from tree to cup.

It was fun checking out the coffee garden and even sampling some of their strong coffees. 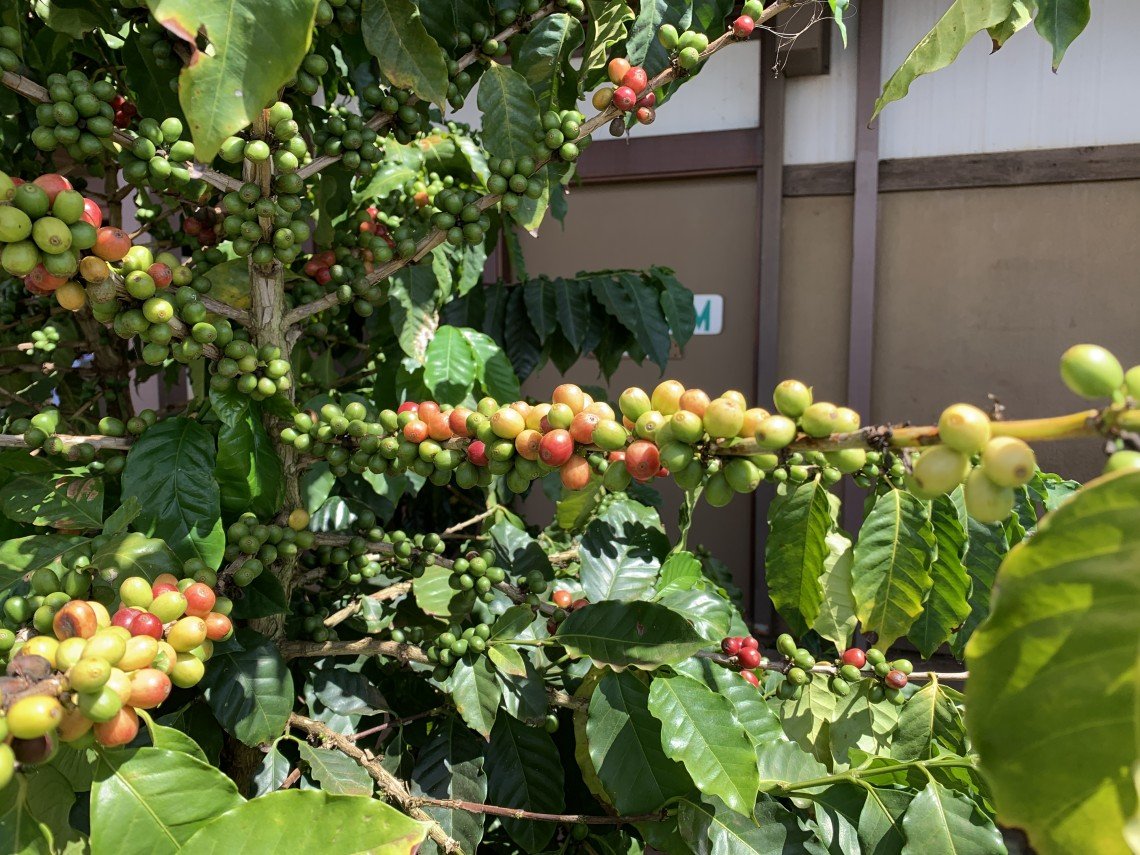 After a quick visit learning about coffee, we headed to the Dole Plantation about a mile north.

The Dole Plantation was pretty busy, even on a Tuesday. We had to park in an adjacent dirt lot because the main parking lots were full.

Though much can be said about how touristy this place is, it’s still a nice place to check out pineapples. 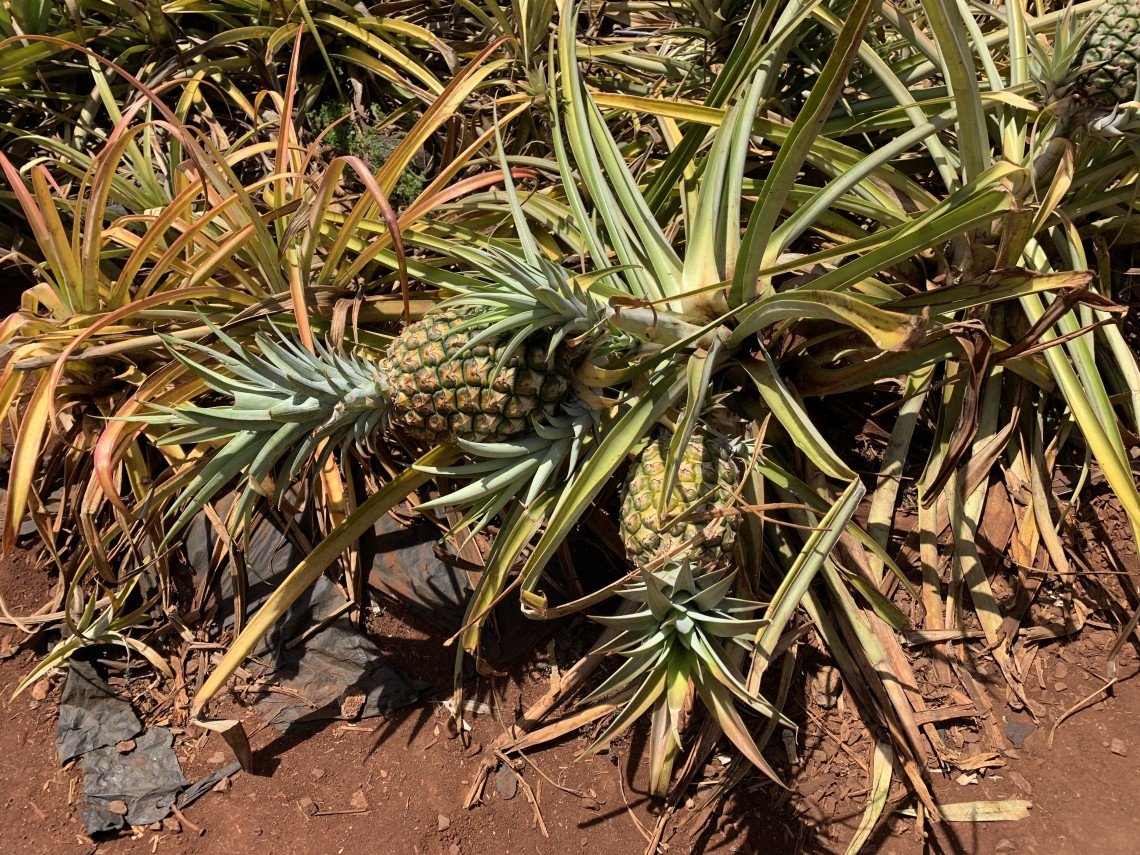 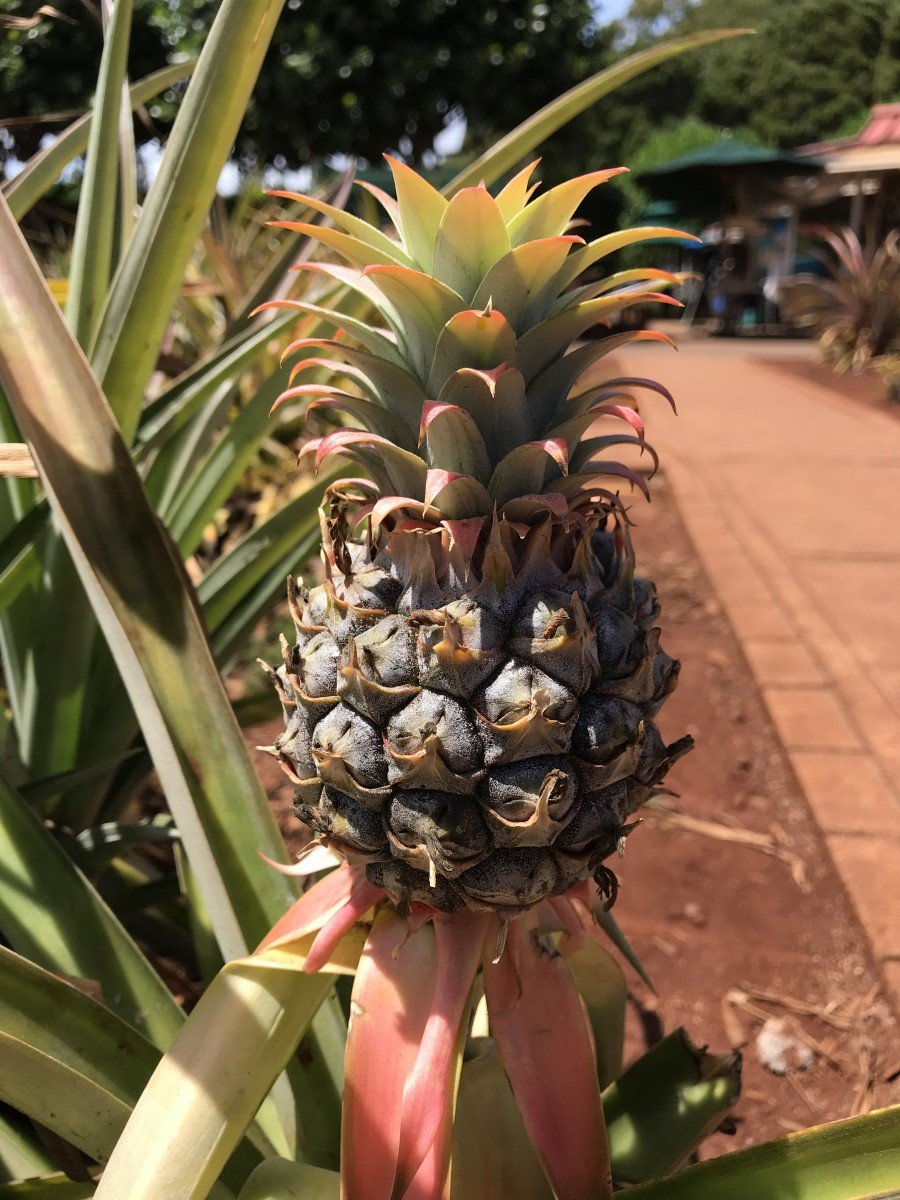 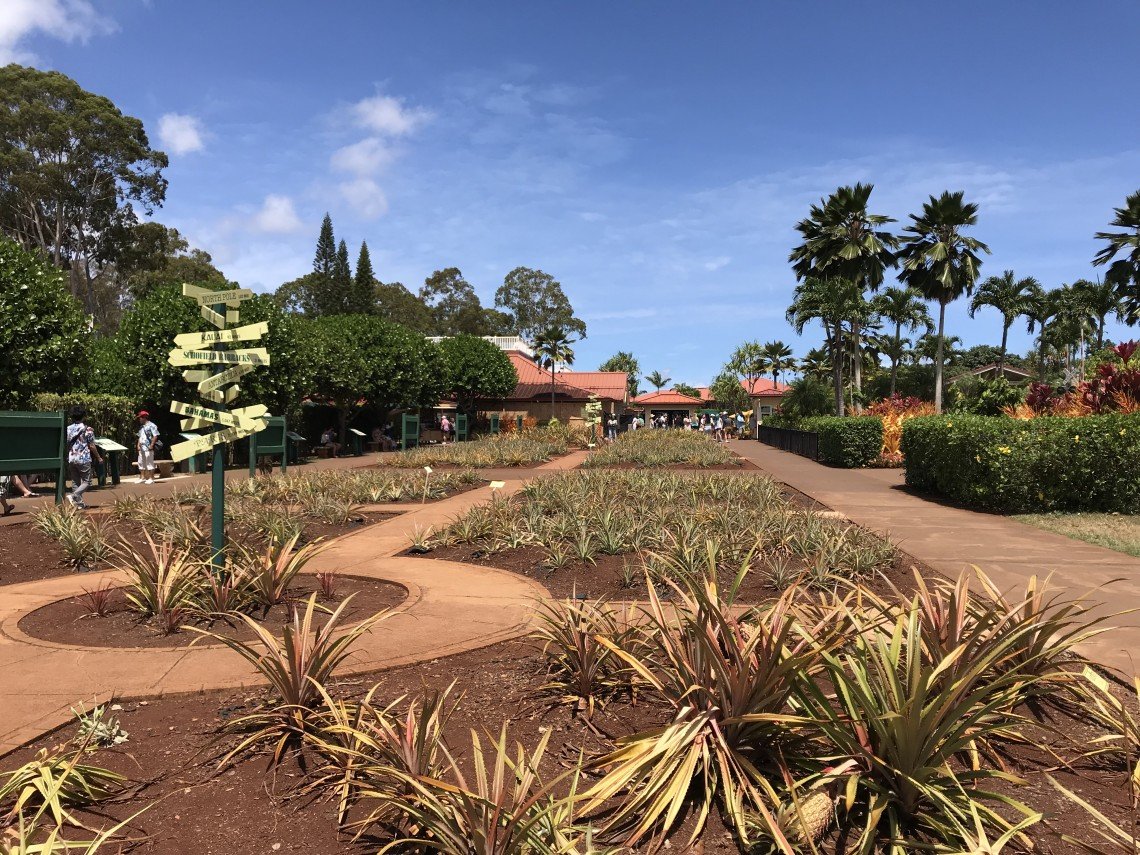 Inside, we enjoyed a pineapple Dole Whip with fresh pineapple on top. Unlike pineapples on the Mainland, the pineapples here are much sweeter. This is mostly because once a pineapple is cut from the plant, it can’t become any sweeter. Plants so close are able to ripen for longer, increasing the sweetness of the pineapples.

Having been to the Dole Plantation three times now, one of the most fascinating things for me was on the way out of the grounds—the rainbow trees! Rainbow Eucalyptus or Eucalyptus Deglupta, is the only species of eucalyptus that can be found in the Northern Hemisphere. The bark peels over the year revealing shades of orange, red, yellow, and even blue. It was fun little sight before we headed to our next stop, the surf town of Haleiwa.

Being foodies, we were on our way to world famous shaved ice from Matsumoto, but we made a quick pitstop.

I can’t wait for us to use them for a special breakfast with friends. 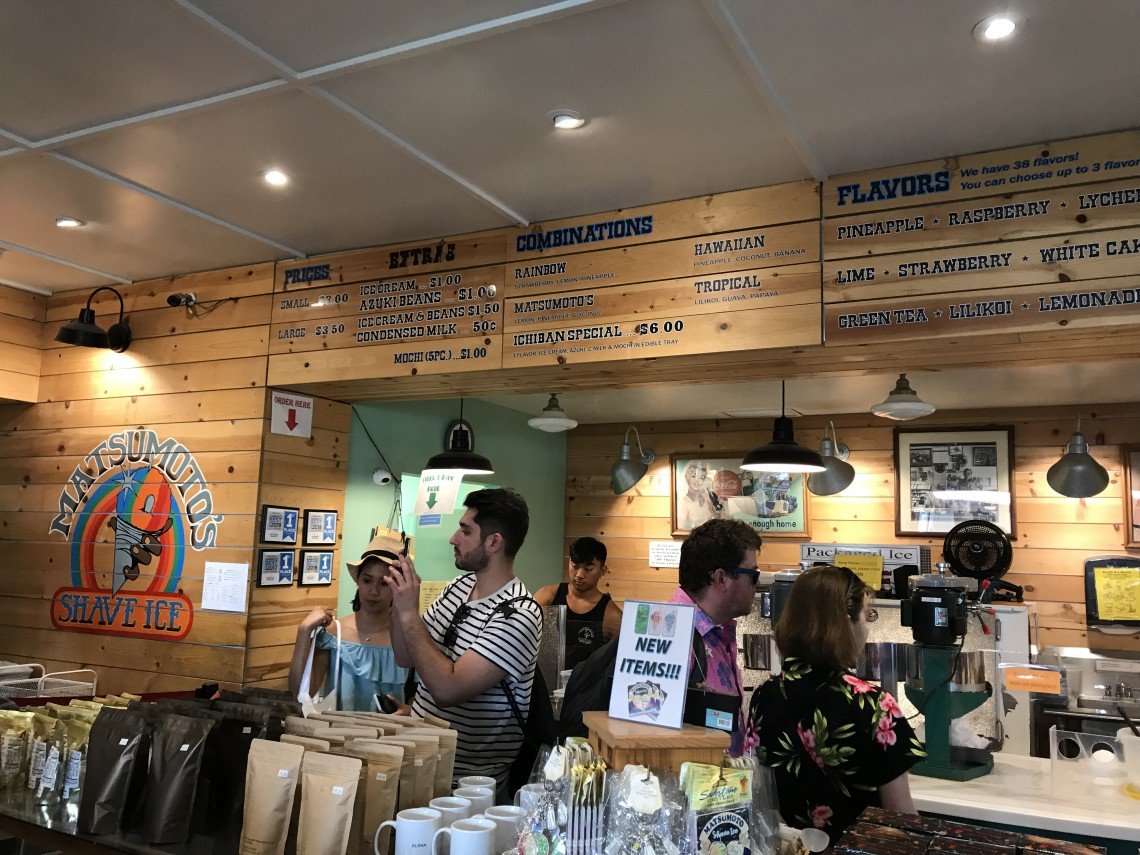 Back on Kamehameha Highway, we drove a minute or so north to our next sweet stop—Matsumoto Shave Ice.

Matsumoto’s is another institution on Oahu, being featured in numerous publications and even on shirts. We luckily found parking right across the street. During busier periods, it may be a little harder to find parking in this area. Some walking may be involved to get to this shop. 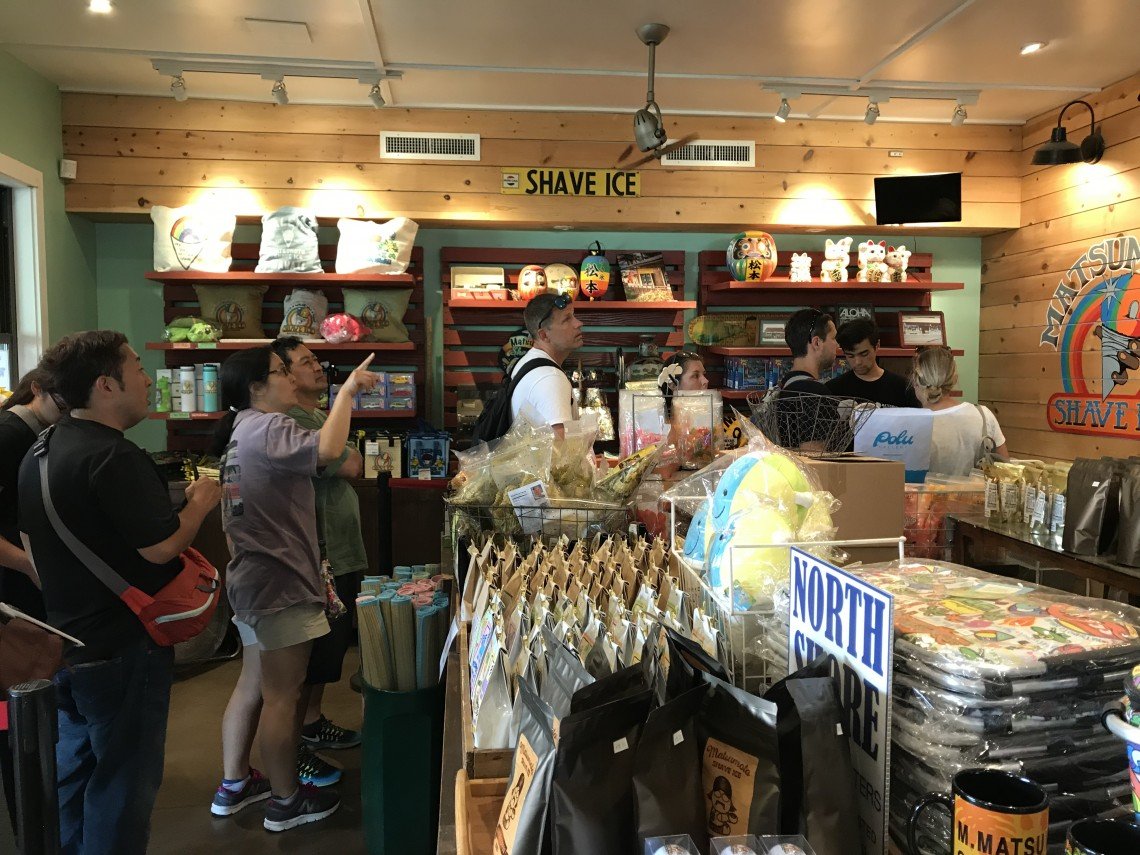 Inside, there was already a line that spilled outside. Even though there was a line of around 30 people, the line went by pretty quickly.

The line gave us time to figure out what we wanted to order.

Inside the shop, old store paraphernalia is scattered amongst purchasable merchandise. 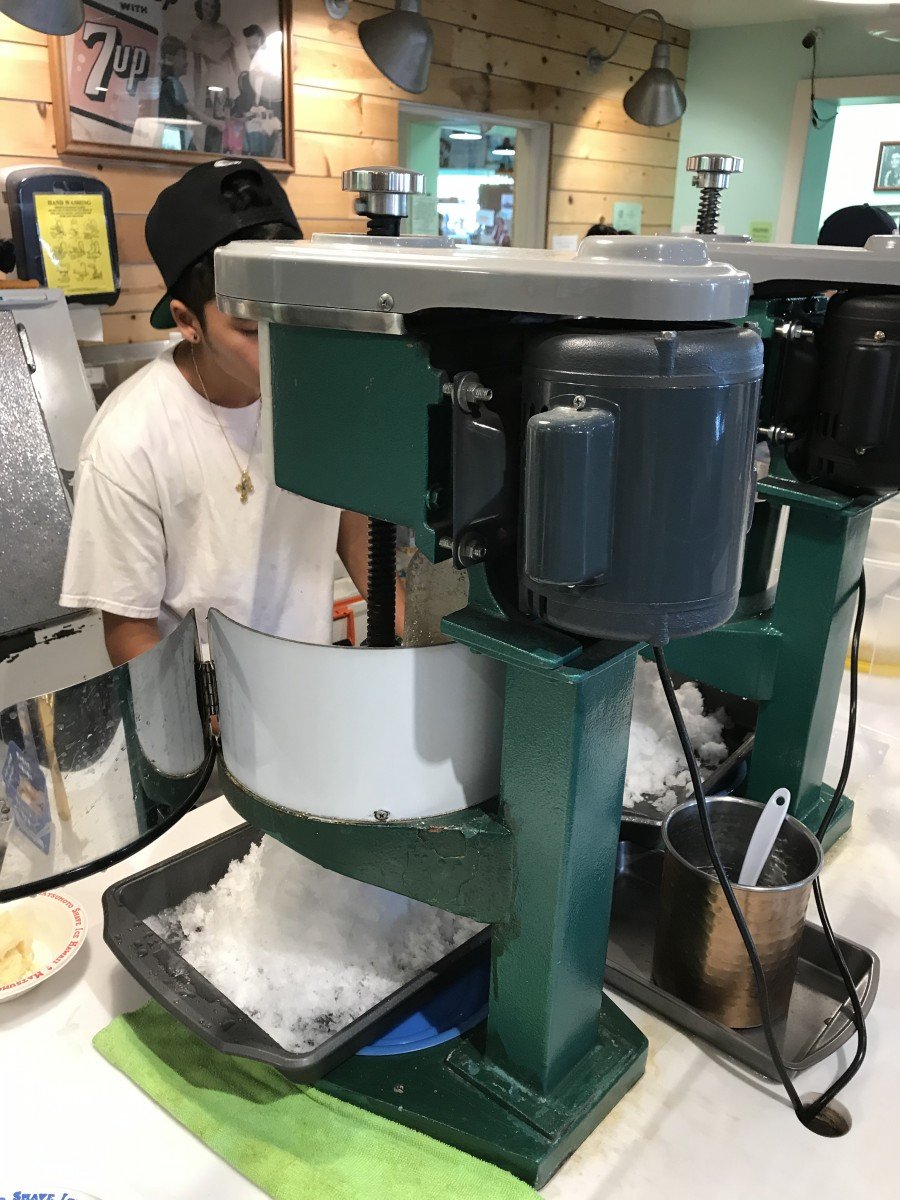 Eventually, it was our turn to order. We got a tropical shave ice.

The ice that came out of the machine was nice and fluffy. Workers gently scooped and patted the ice into our bowl to form a small dome. 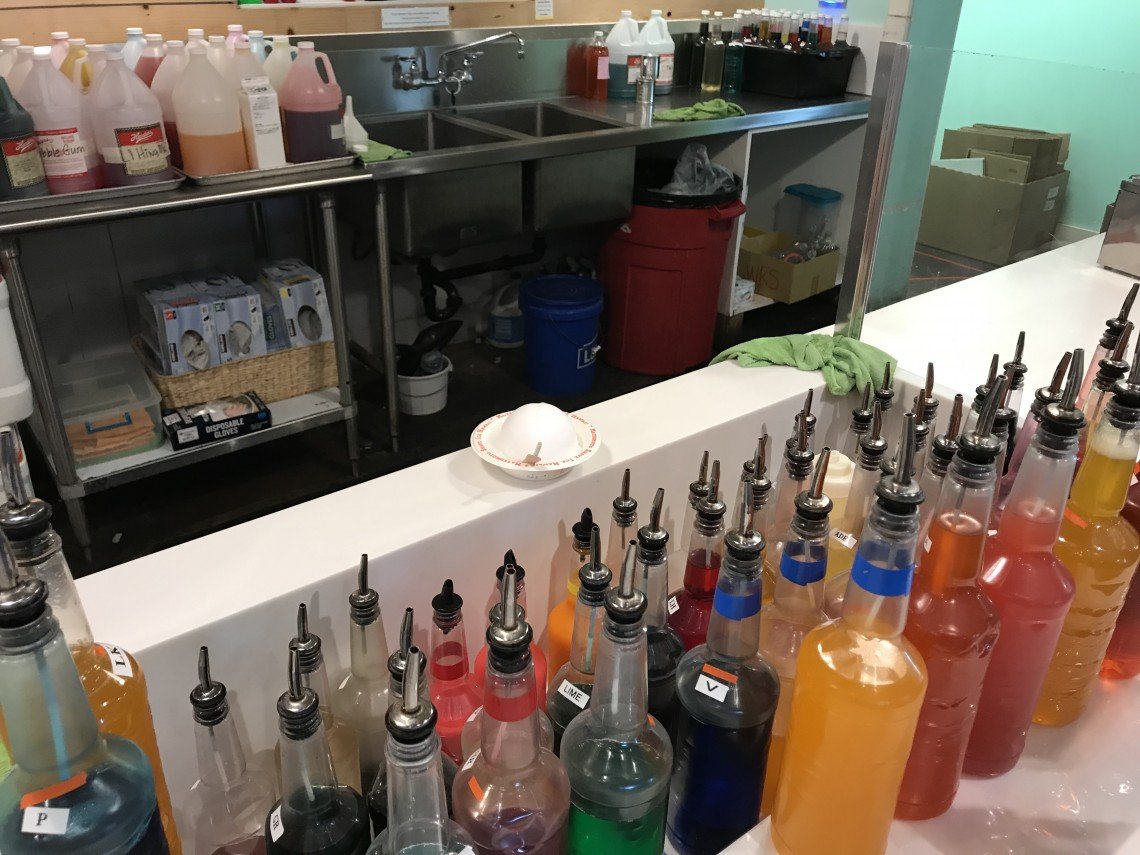 Here are all the flavors. There are over 30 to choose from including the typical (like strawberry) and more exotic (like mizore).

In typical Hawaiian fashion, they gave us a spoon and a straw to slurp up the sweet goodness that melts.

This was my first time to Matsumoto’s. I had previously been to Aoki’s and I liked that one. I think of the two, they’re pretty close. Matsumoto’s ice may be a little softer and the flavors more subtle, but Aoki’s comes in an easier-to-manage cup. I would choose basically based on the line.

Before leaving the shop, it was fun seeing this little reminder of way back when. Who else had a POG collection?

After getting our shave ice fix, we headed up the coast to Laniakea Beach to see if there were any sea turtles (honu) around.

Due to the crowd of cars during the weekday, I figured we might be in luck. I pulled over on the side and we walked to the beach. The sand here is super nice and super hot. As we walked to the area where people were crowded, we quickly stepped around to avoid getting burned from the heated sand. 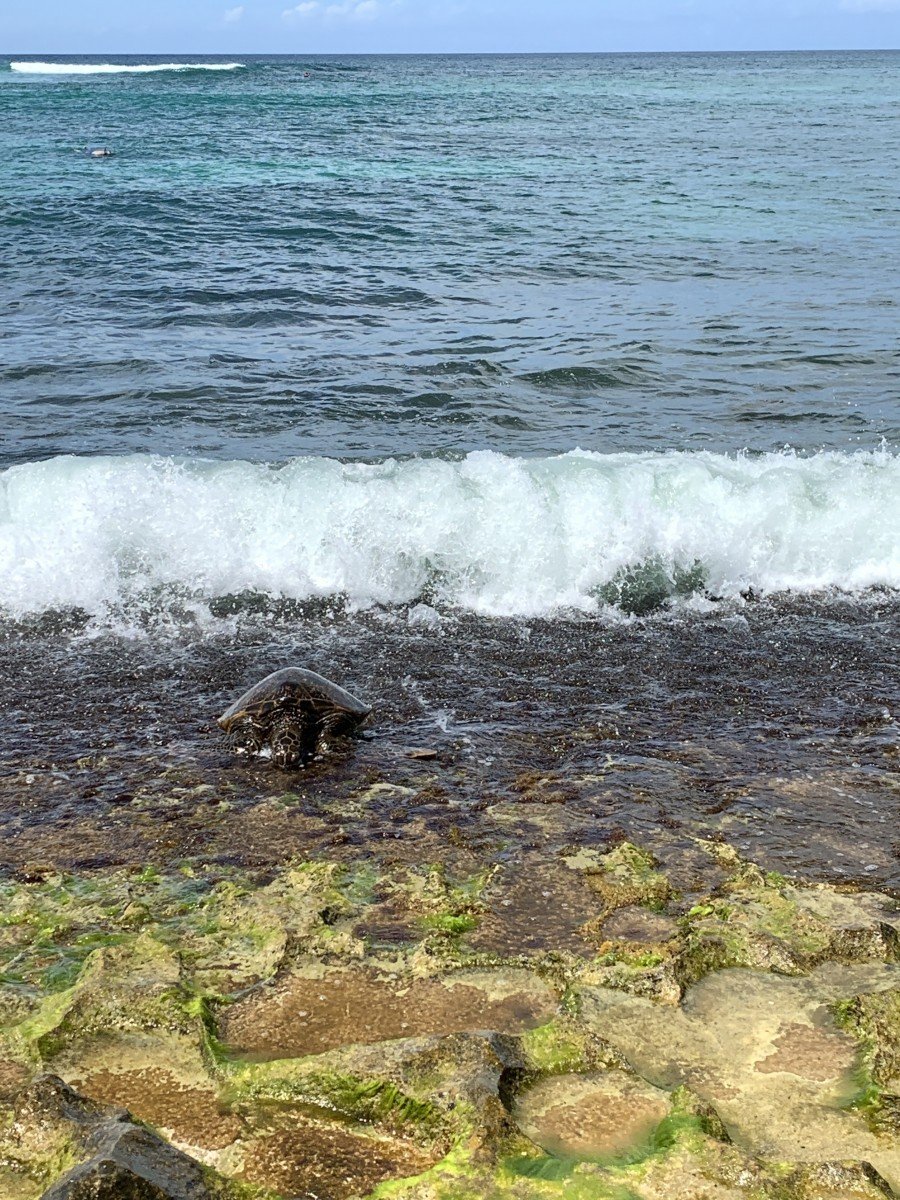 We were in luck!

There were around three sea turtles at the time. One turtle was on the sand just relaxing. 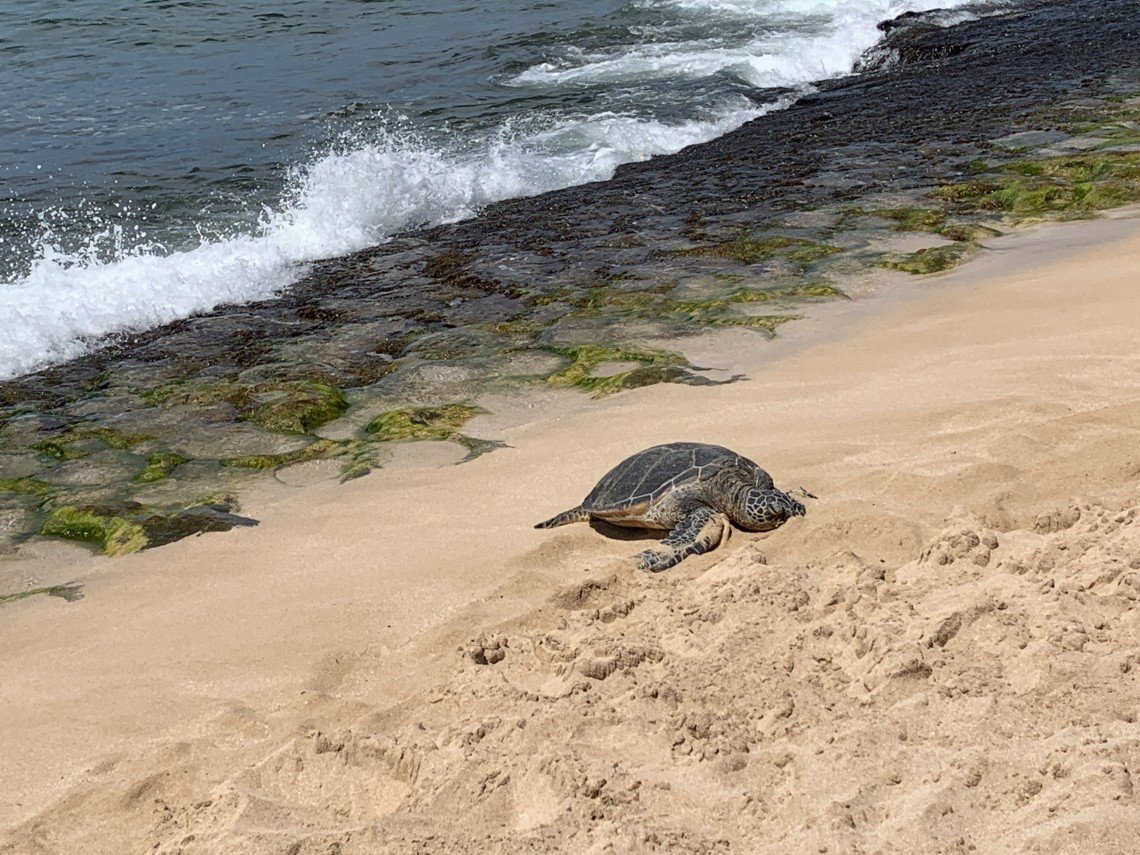 There was a rope around them and volunteers keeping watch, making sure that people didn’t get to close (or even touch them). Not only is touching the turtles a crime, but our oils can cause them to lose their protective coating (making them more susceptible to disease).

On the drive up to Kahuku (the northern tip of the island), you’ll pass by a variety of trucks. These food trucks are world famous for their garlic shrimp. These shrimp are sauteed with garlic, butter, and sometimes lemon.

The Kahuku location of Giovanni’s is the focal point of an outdoor food court featuring grilled corn, turon, and many other food items. We picked up a few things to snack on before continuing our journey around the island.

I never had star fruit before, so that was fun to eat.

Here’s a piece of turon. It doesn’t look that great but it was pretty good. 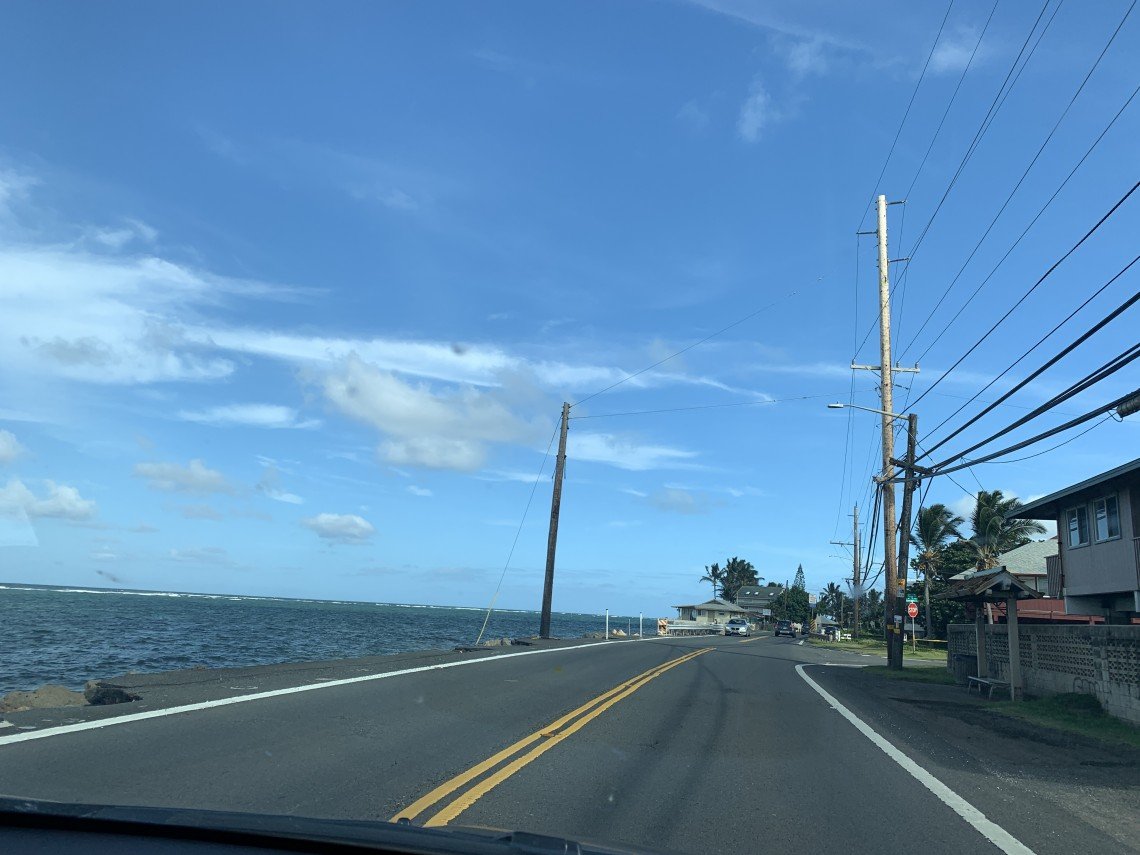 Driving around North Shore and Kahuku, much of Kamehameha Highway looks like this—with virtually no beach or natural barrier between the road and the Pacific Ocean. There’s something surreal about being so close the raw nature.

The road between Laie and Kualoa Ranch is probably some of the most remote that you’ll experience along this journey. The views are super beautiful and stunning though with sheer mountains seemingly jutting from the ocean.

As the day was winding down, we didn’t stop by Kualoa Ranch (which is famous for its role in the Jurassic Park series). Instead, we made a pit stop at Waiahole Poi Factory.

Waiahole Poi Factory is a small shop that’s easy to miss. Apparently it has amazing traditional Hawaiian food and poi (a local dish that everyone should try at least once), but we elected to try their dessert specialty.

Sweet Lady of Waiahole is warm kulolo topped with vanilla ice cream. Kulolo is a kind of pudding made from coconut and taro. It had the consistency of fudge.

Though the taste and temperature combination were different than what I’m used to, it was still delicious. It was the perfect way to end our trip around the North Shore.