Having experienced Pride in cities like Los Angeles, San Francisco, and Vancouver; I always wanted to check out what Pride is like abroad. Last year, I had the chance to check out Taipei Pride.

This was the first pride after Taiwan legalized same-sex marriage. It was a momentous occasion with smiles, laughter, color, and pride all around.

I didn’t know it at the time but the turnout was estimated at over 200,000 participants (almost double from the year before). 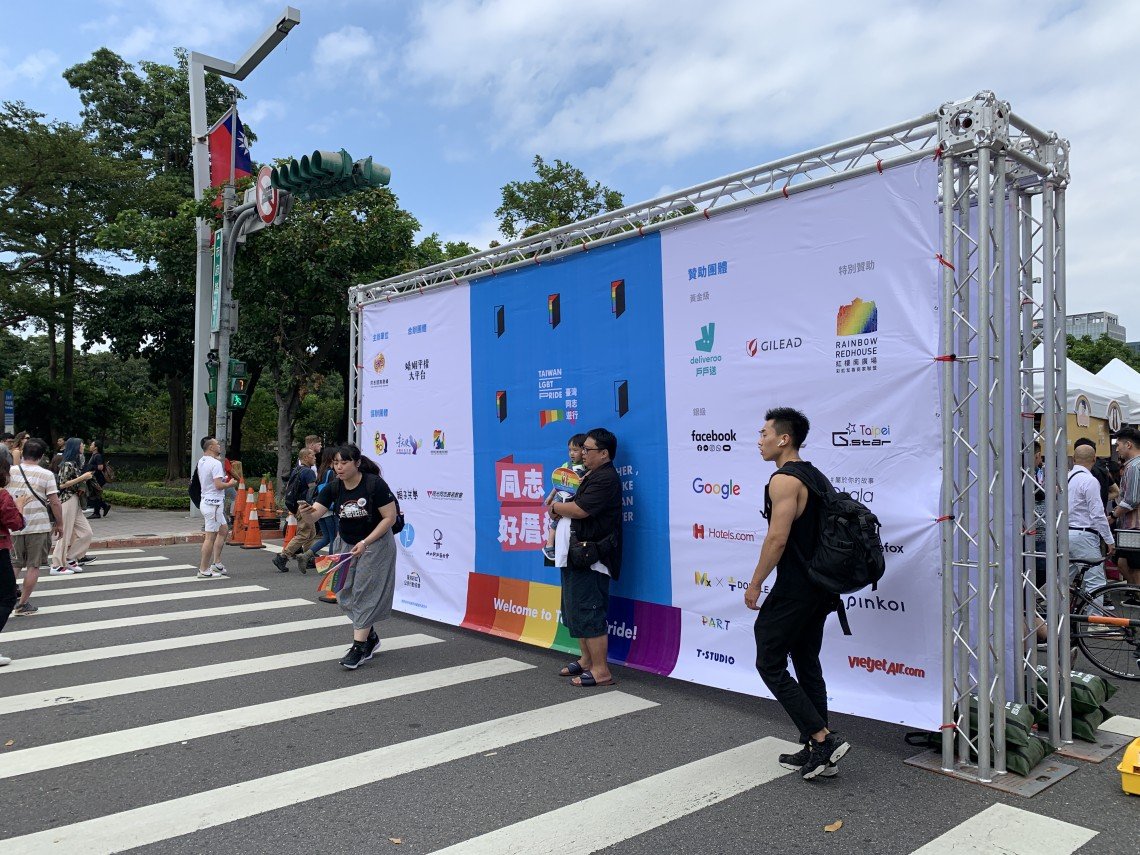 The start of Taipei Pride centered around a bazaar with vendors selling various wares and people promoting their companies. This festival was just a few blocks north of Taipei 101. This was the sign that let us know we were in the right area. 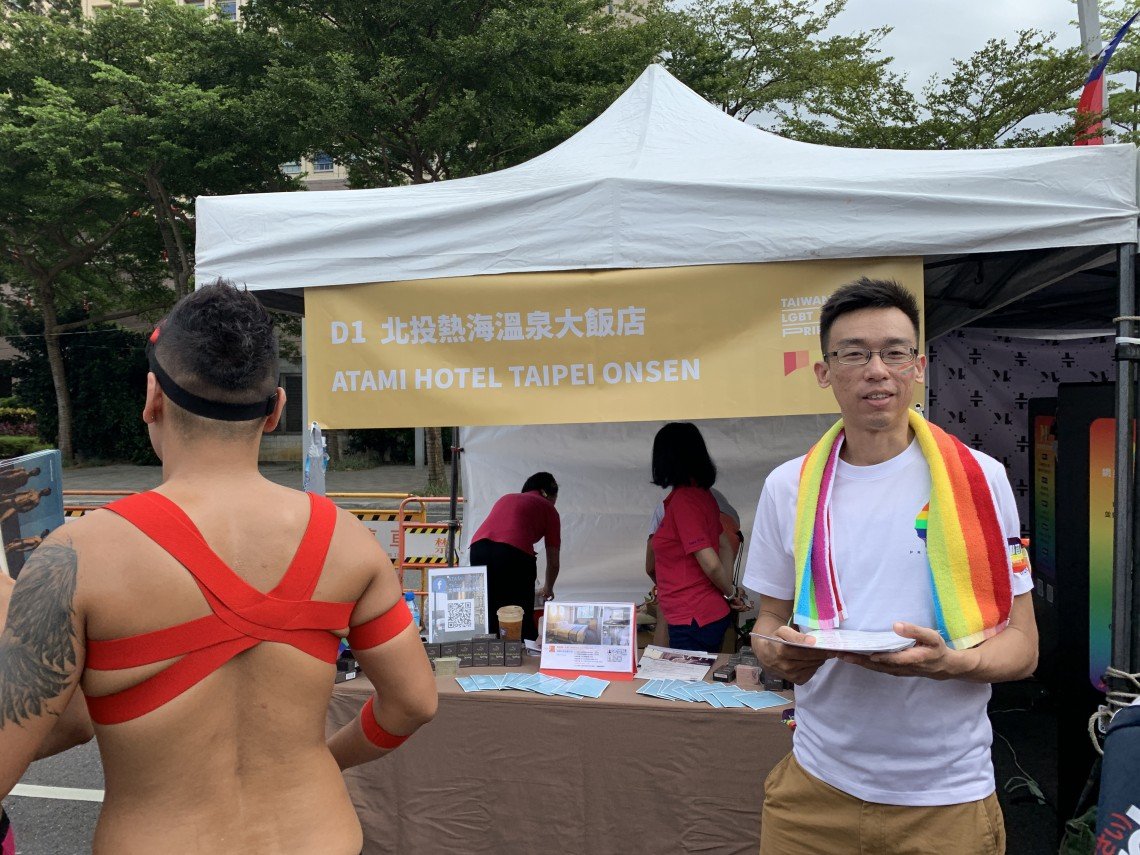 We browsed a bunch of the booths ranging from shops selling niche clothing to large brands like Google.

Fun Fact: the term 同志 (tong zhi) meaning comrade has come to represent identities outside of the traditions of heteronormativity.

The festival was packed with people looking for cool things to see and buy. 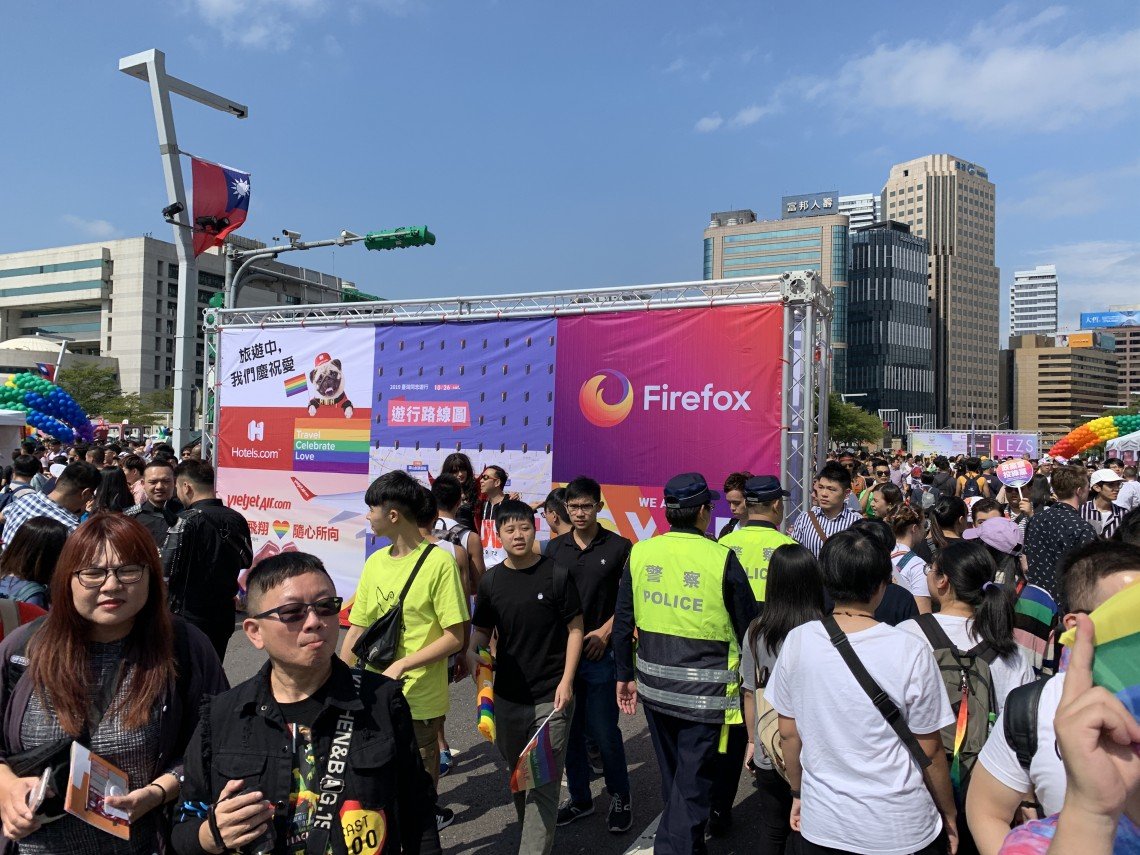 The weather was super nice with the sun shining through. Incidentally, Taipei Pride is later in the year than many other pride celebrations out there because of the rainy weather during June and July. October is the perfect medium between weather that isn’t stormy and temperatures that aren’t too cool (during the winter). 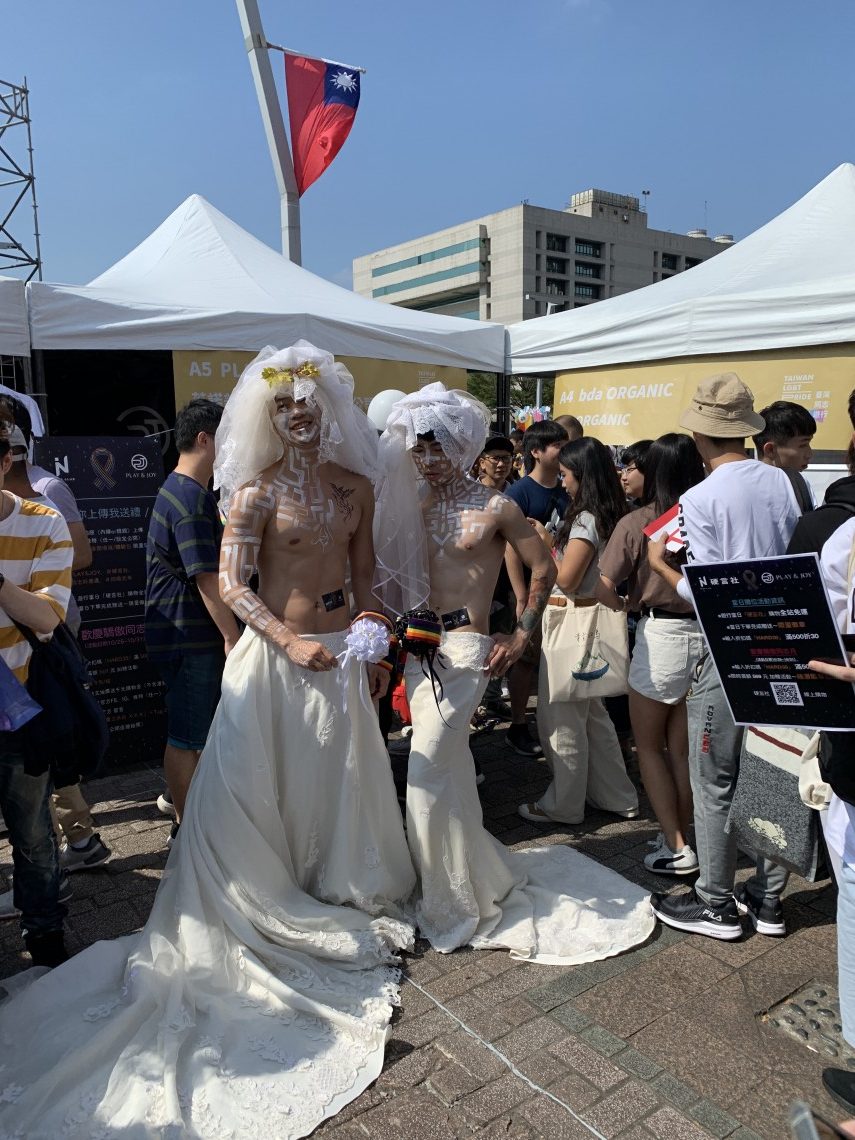 I’m not too sure what these two were dressed up for, but there were a variety of booths with people out front posing for photos. There were also a number of attendees dressed in drag, making their presence known. 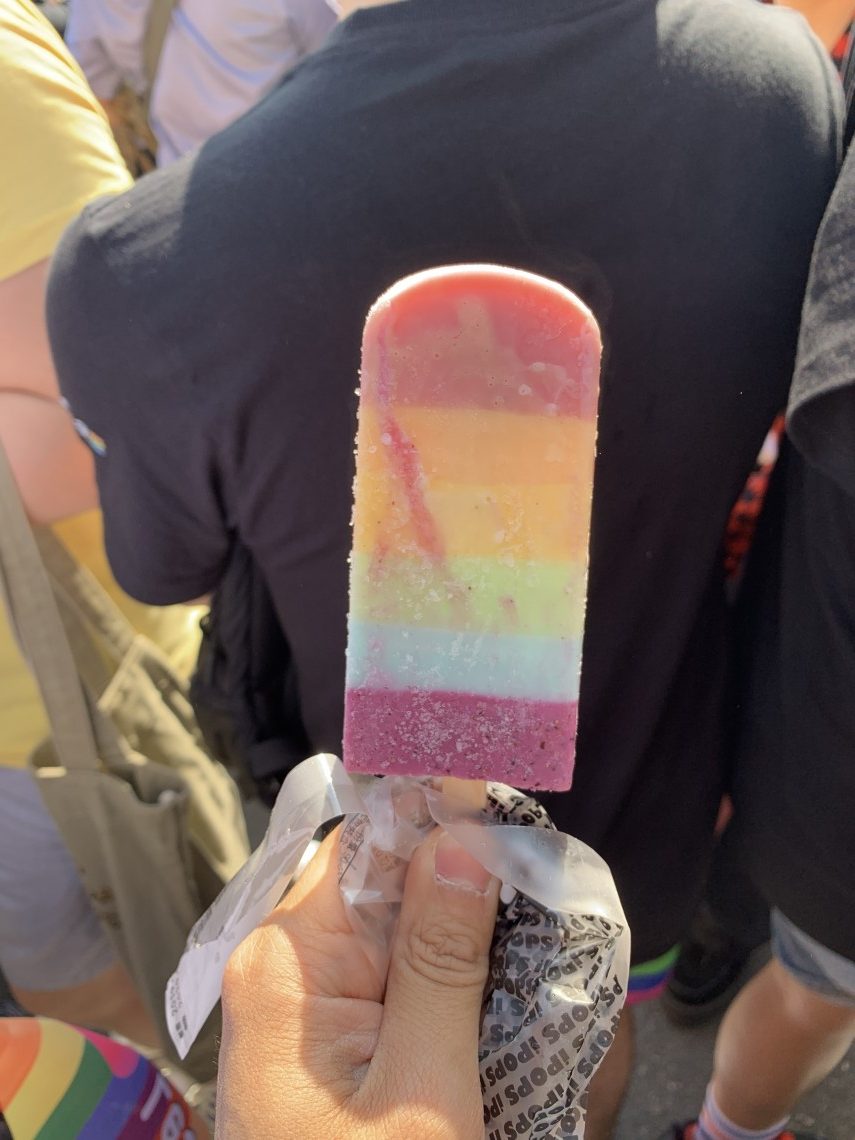 One of the booths was selling rainbow popsicles. Can you guess the flavors?

Okay, they are strawberry, mango, pineapple, kiwi, blueberry, and grape.

MAC had one of the more ostentatious booths out there with this mermaid-like character. Does anyone know if this is a direct character reference?

After browsing the booths we went closer to the main stage. There were various performances going on, culminating in the kick-off to the Taipei Pride Parade. 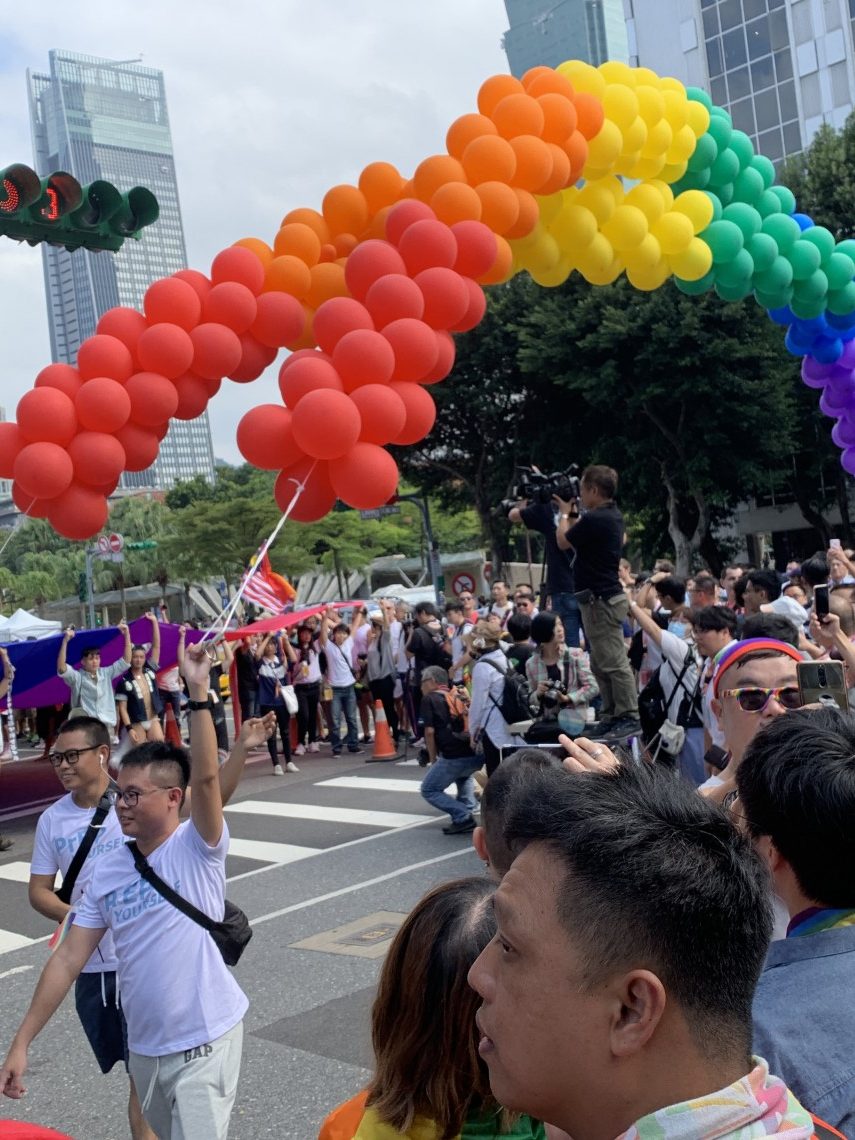 The pride parade is unlike anything that I’ve seen before. Much like Vancouver Pride, the streets did not have barriers set up, but the similarities end there. 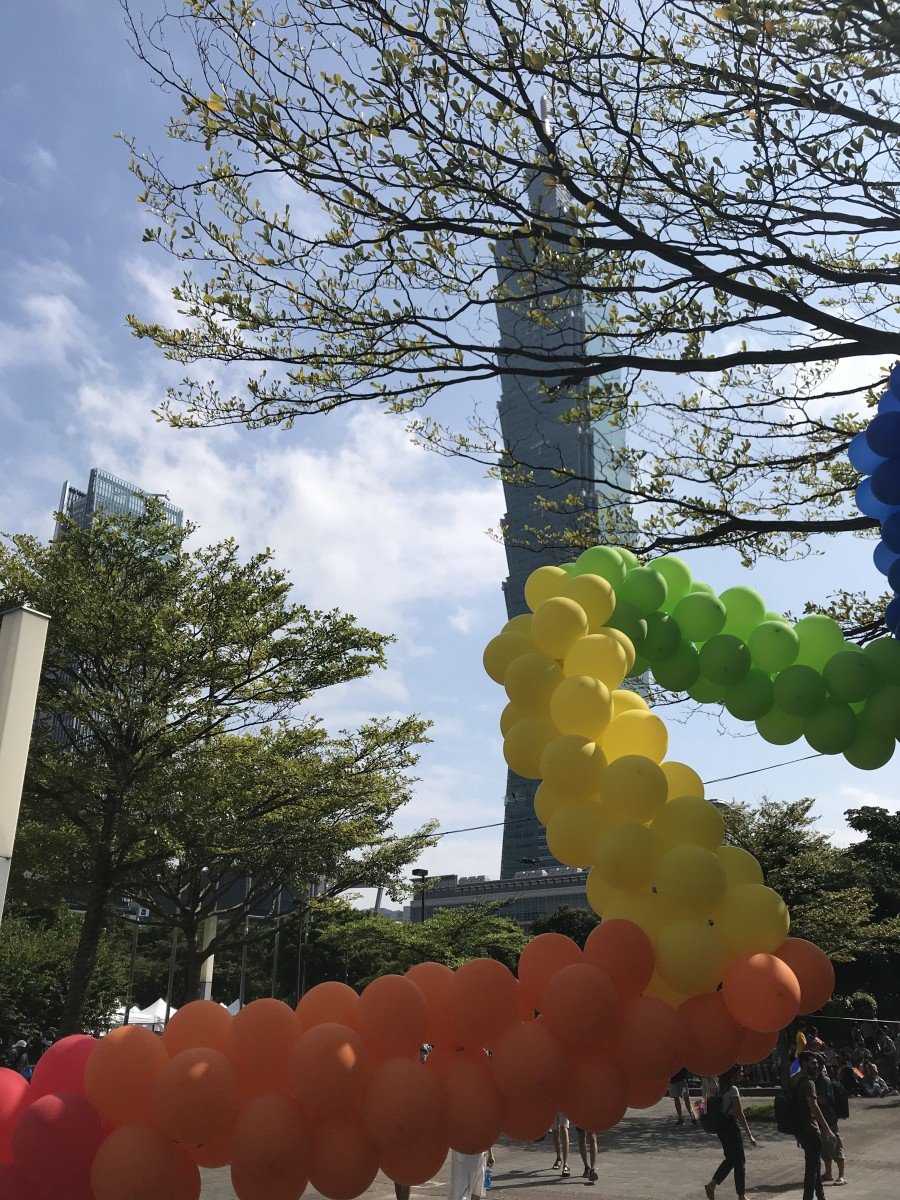 The parade was more like a march. There were individual groups that made their way down the parade route, but as time progressed, more people began filling in the space between and marching with those organized parade groups.

Here’s a group dedicated to helping stay animals, for instance. Except for the signage though, you wouldn’t really know where one group begins and one group ends.

People lining the street created a thoroughfare that expanded and contracted pretty organically. On the inside, people from the audience joined in the march, little by little. 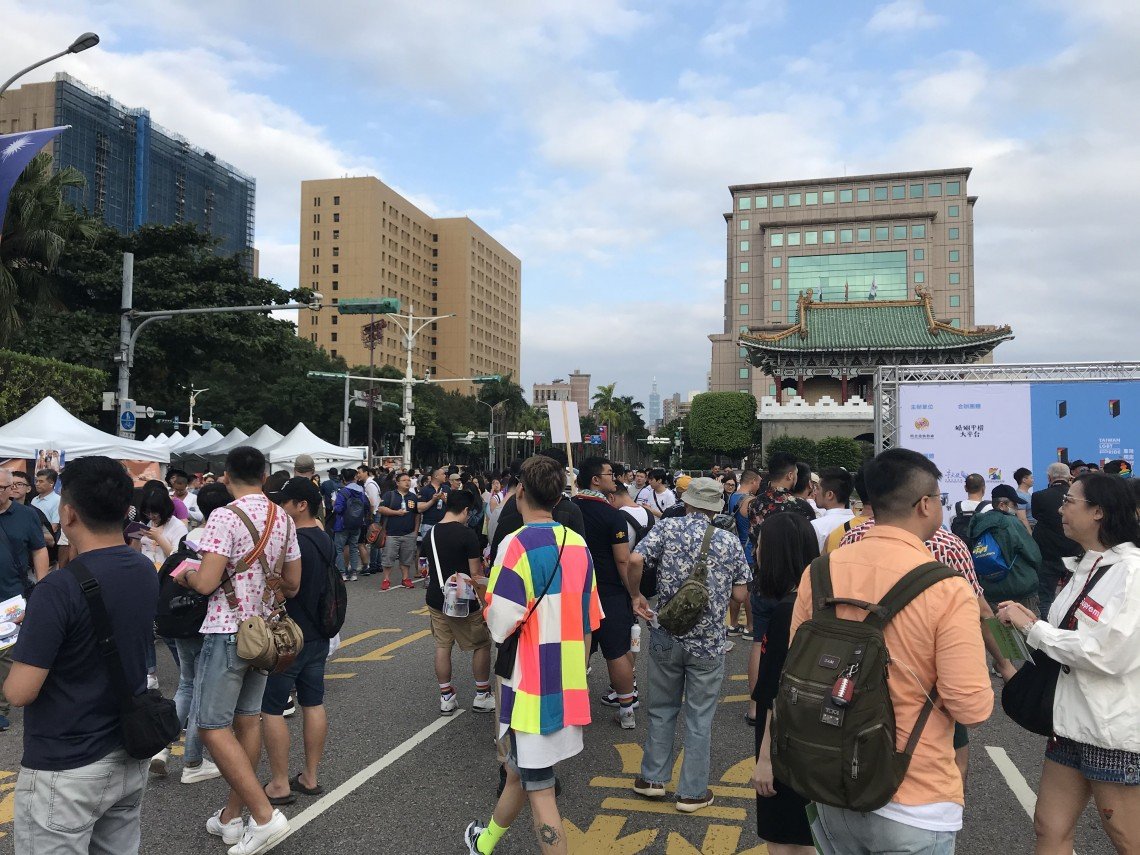 After watching the parade for a bit and even, seemingly, marching aside on of the contingents, we picked up the MRT to head to the East Gate. The East Gate, seen in the photo above, was the termination point of the parade as well as the location of the second part of the festival. This festival was a lot smaller, but it did have a nice stage set up.

Interestingly enough, you can see Taipei 101 where the parade started in the background. This parade route was around 5 kilometers (approximately 3.1 miles). Even though, non-stop walking it would take about an hour, it was probably two to three hours before we were able to greet the first contingent.

As more groups finished the parade, this festival got larger. Music played as announcers welcomed groups finishing the route (almost as if they were announcing winners of a race). The crowd was lively and the mood was amazing.

After this, we walked to the (traditionally) LGBT part of Taipei, Ximending (西門町 / xi men ding) to continue the celebration. Along the way, we passed through 2/28 Peace Park (二二八和平公園 / er er ba he ping gong yuan)—known for being a place where gay men would find each other before the age of smartphones and instant communication. For a city that’s as steeped in tradition as it is invested in the future, it was a fitting way of rounding out the pride experience.