After many failed attempts, I recently got to experience RAW in Zhongshan District, a stones throw from the Miramar Ferris Wheel in Taipei.

It’s hard to think of a meal in Taiwan that’s been bad. More of it has been surprisingly good and even amazing.

For what it’s worth, I feel like I have to put RAW in a class of it’s own. By far, it’s one of the most expensive meals I’ve had in Taiwan, but it’s also one of the most unique. The food is a very pleasant blending of Taiwanese and French cuisine. The head chef, Andre Chiang, masterfully extends the experience beyond just taste though, looking at such details as visuals and smell. 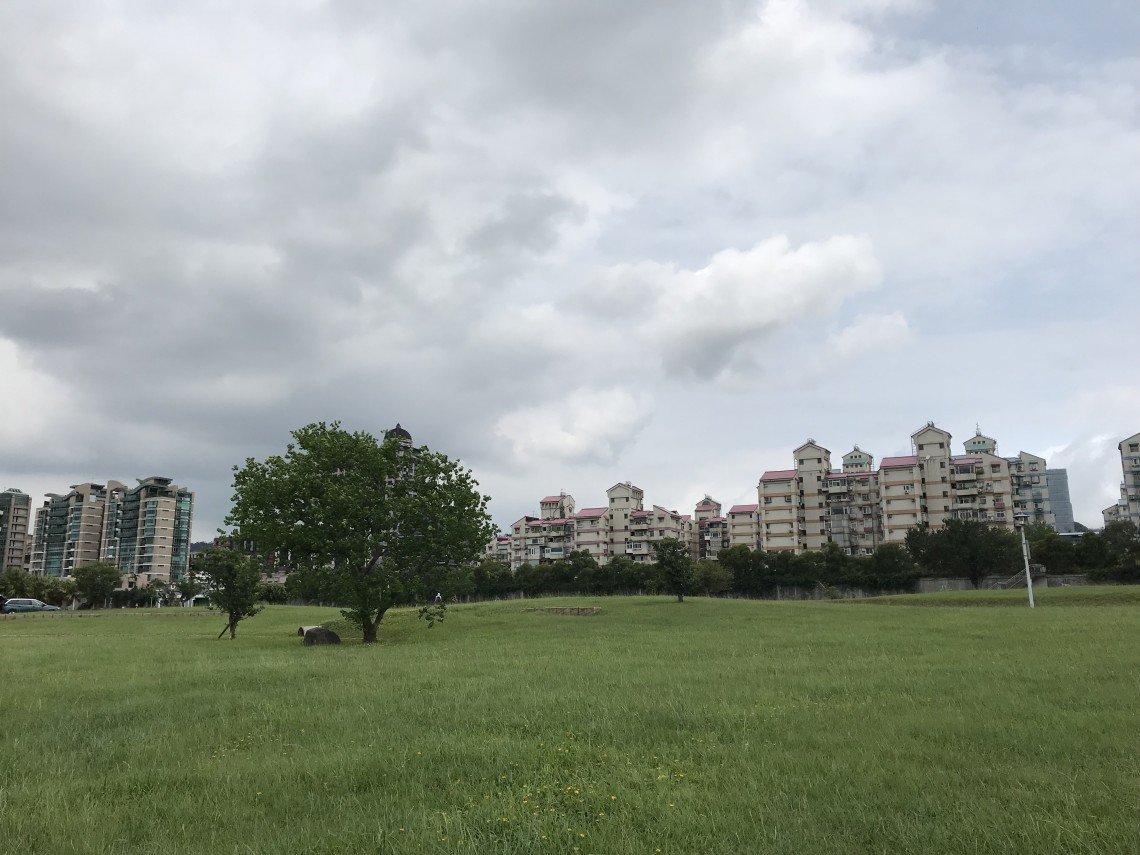 We got to the area around the restaurant early, so we decided to walk to a nearby park, Meiti Riverside Park (美堤河濱公園 / mei di he bin gong yuan). It was very peaceful and idyllic with vast swaths of grass gently blowing in the wind. 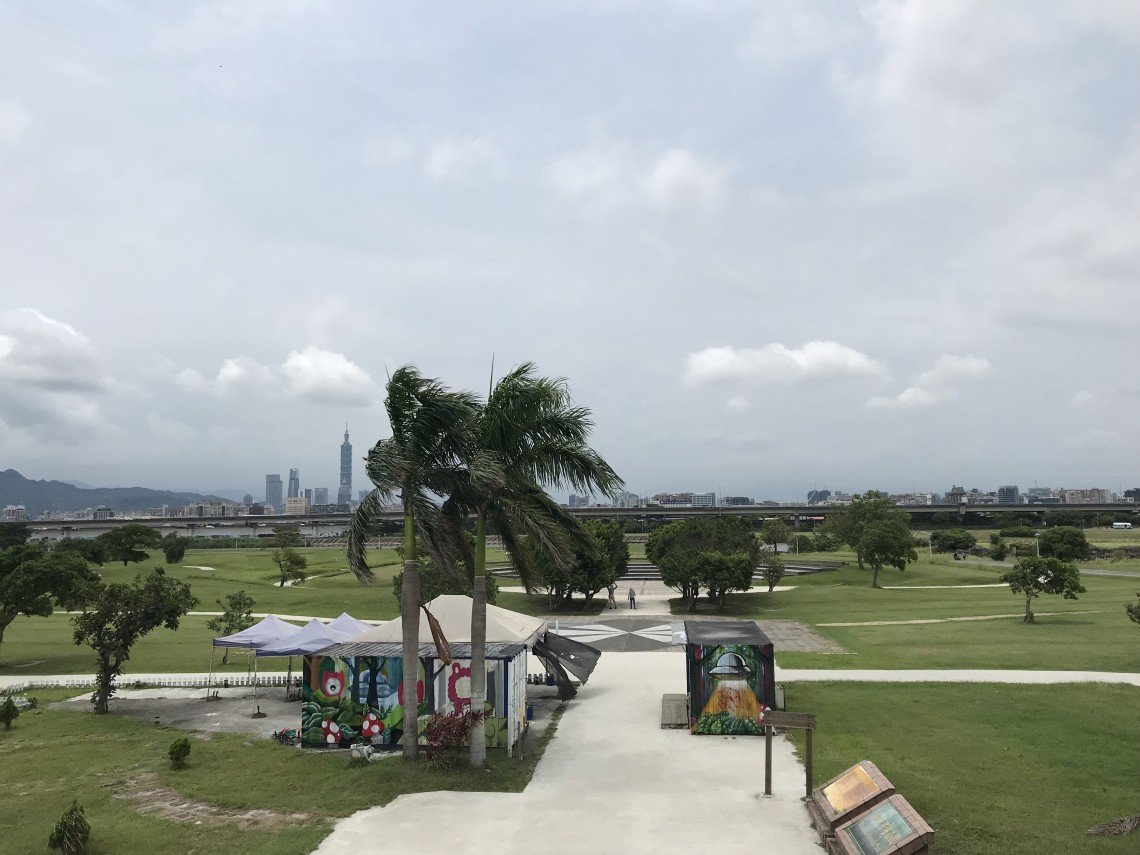 From this photo you can see how tiny Taipei 101 is in the background. With 15 minutes until the restaurant opened, we headed out. 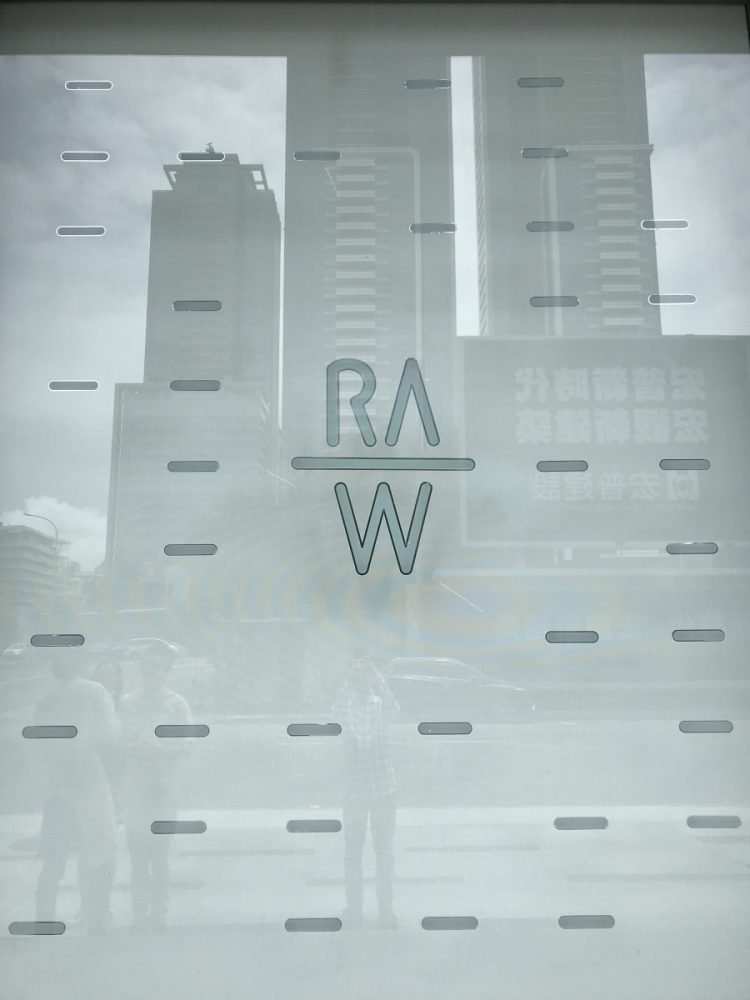 By all outward appearances, the restaurant is pretty humble on the outside. We got there at opening, so the blinds were still down. 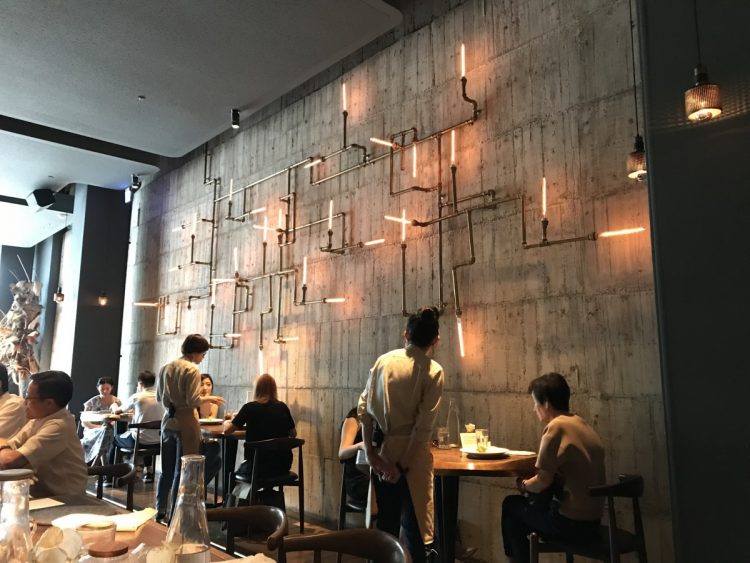 Here’s a photo of the interior. The restaurant felt more casual than pretentious. 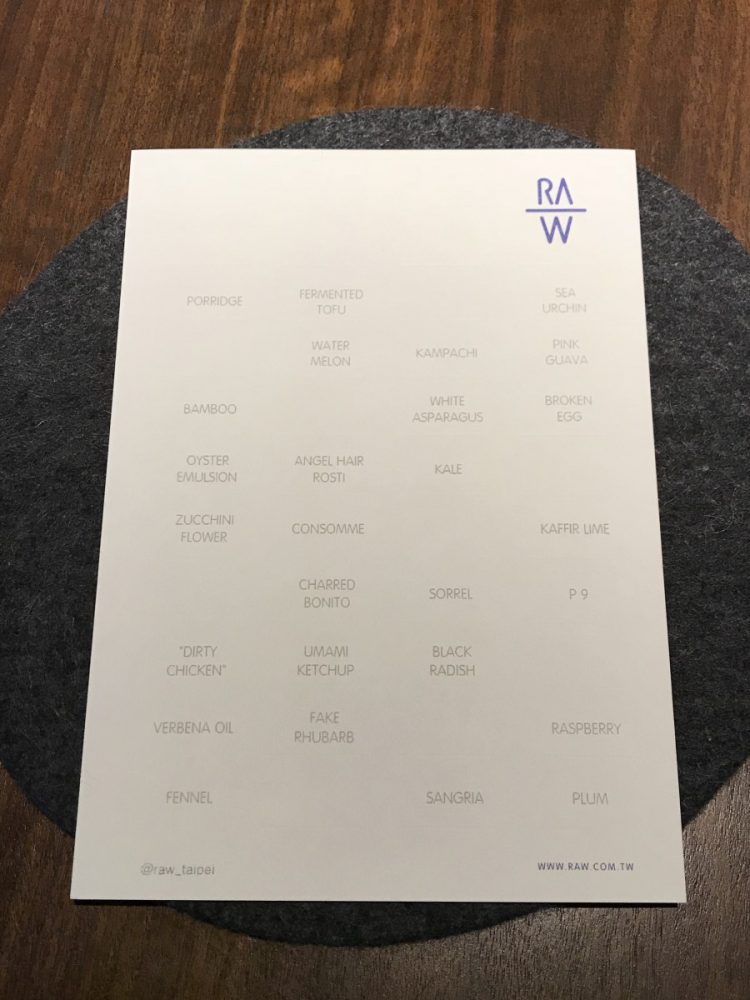 Here is a view of the menu. Each of the dishes is represented by a row with the different items in each row, present in the dish. 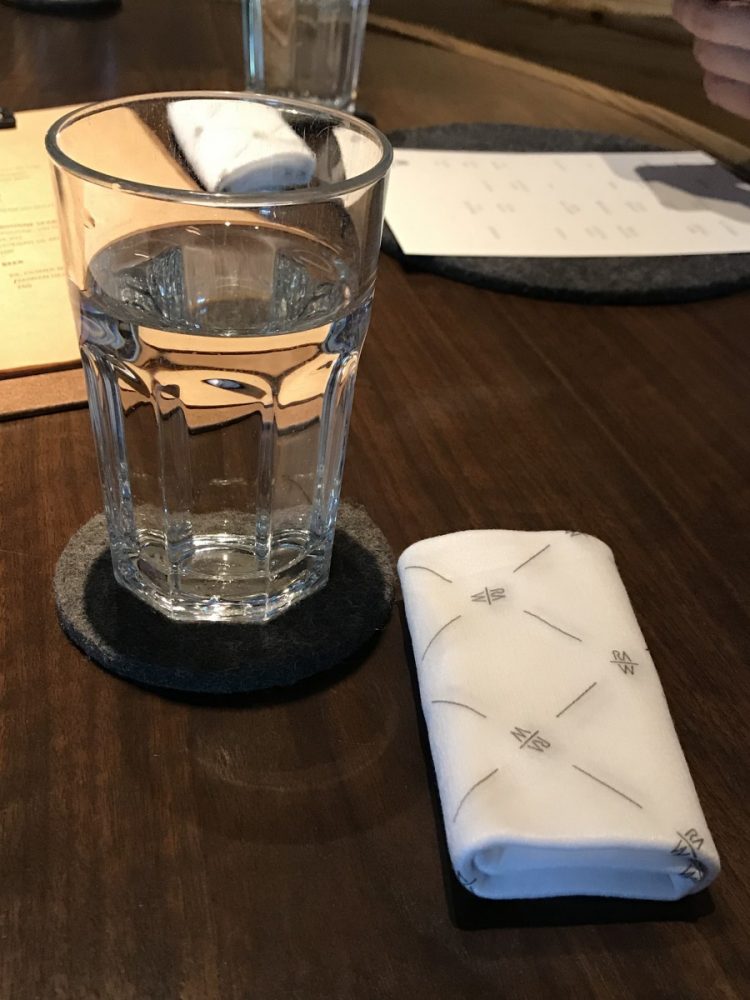 Distilled water for me. 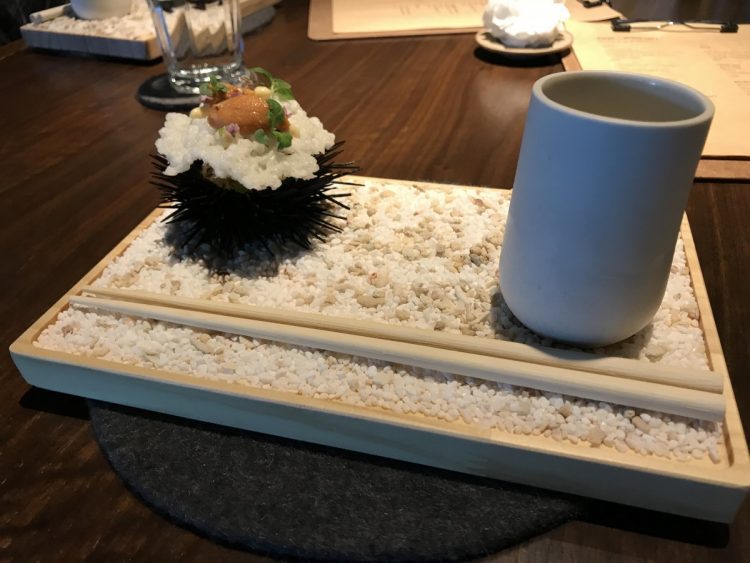 The first dish was uni (海膽 / hai dan) and fresh herbs on top of a crispy rice cracker. 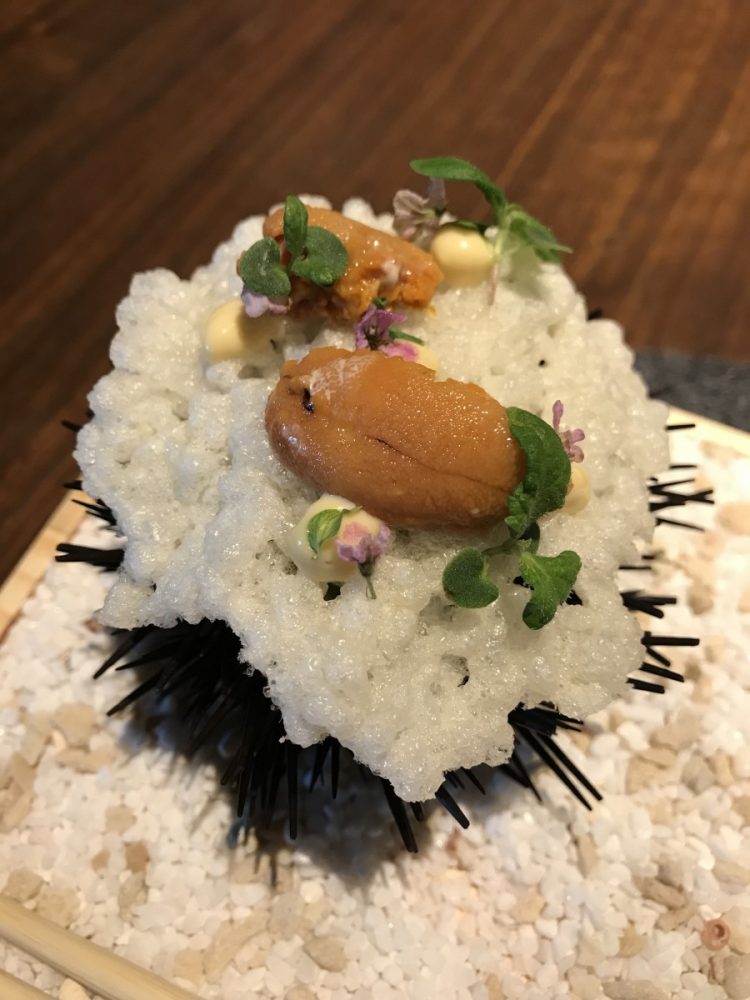 Underneath the cracker revealed the sprouts. The porridge was inside of the cup. 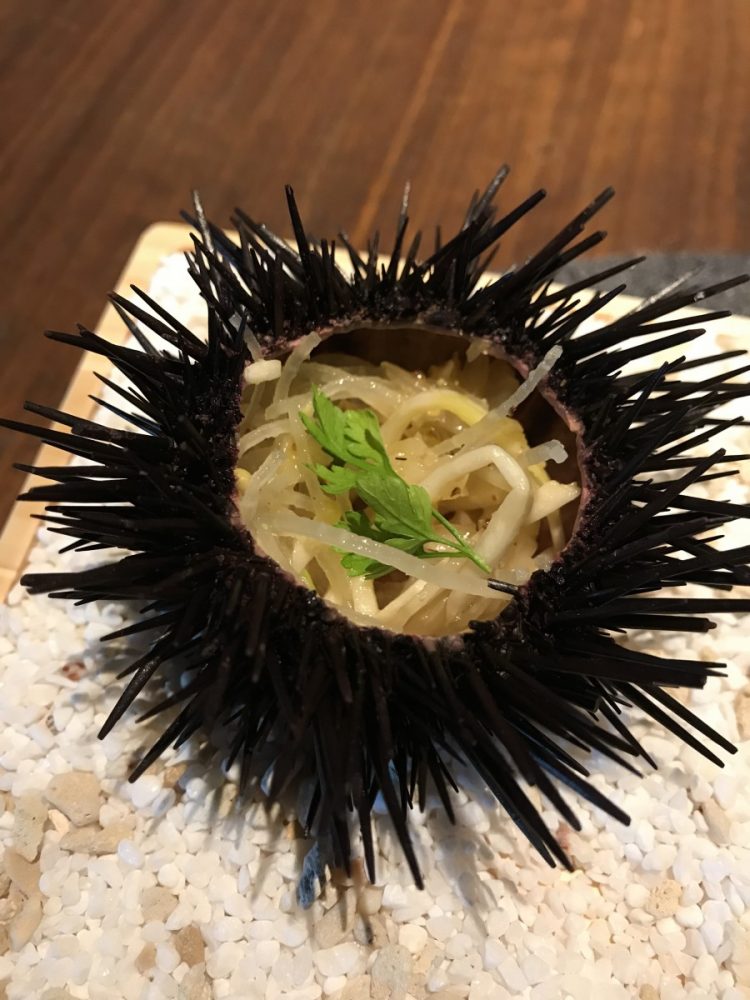 The servers brought over freshly made bread with hand churned butter. 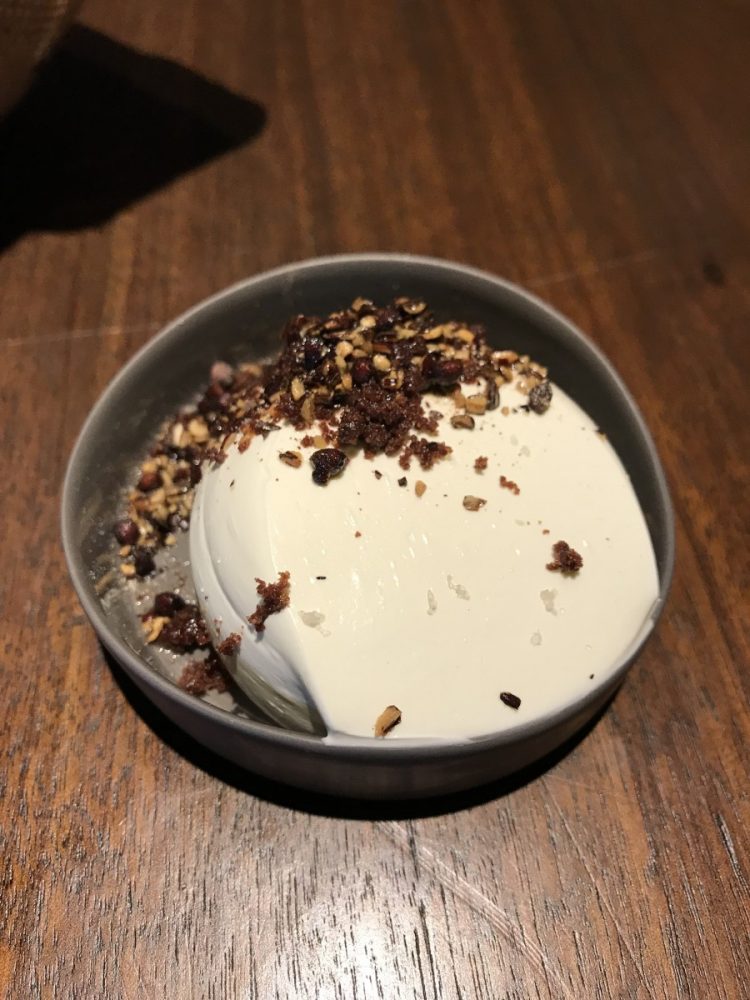 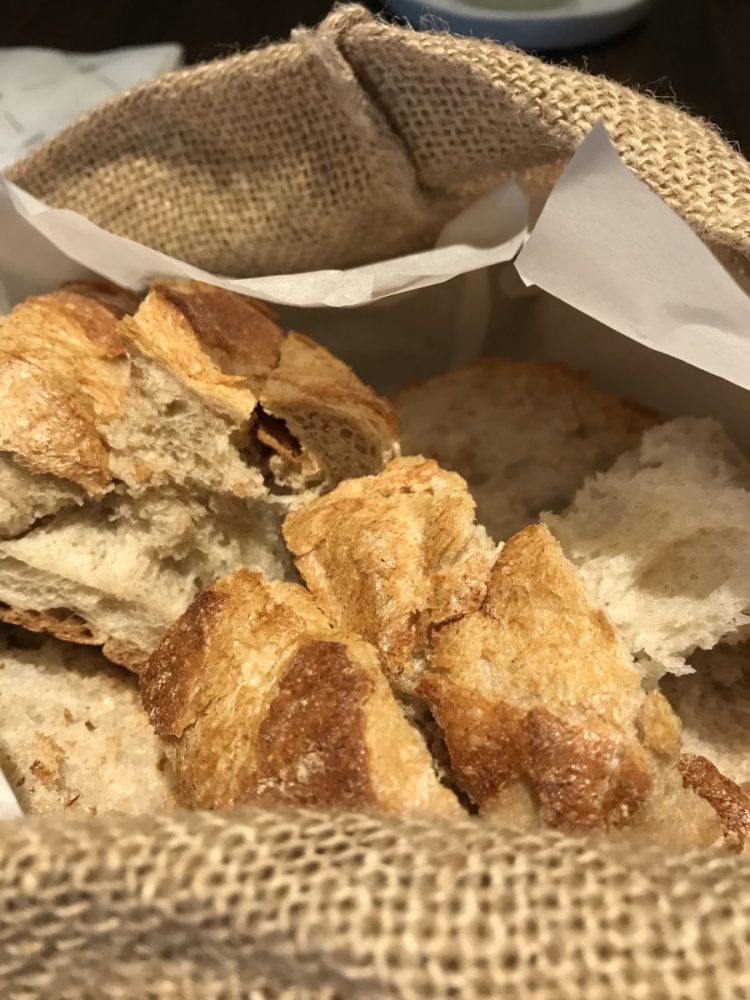 Because it’s the summer, watermelon (西瓜 / xi gua) is everywhere. To celebrate the second dish used different aspects of the watermelon. 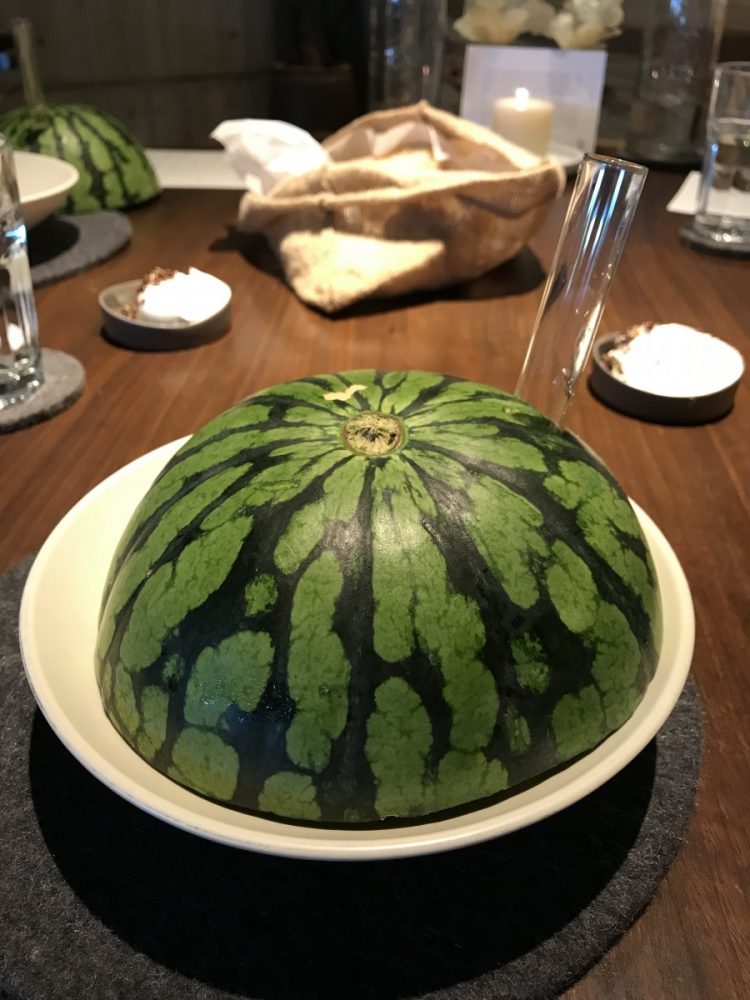 The test tube contained dressing made with a yellow watermelon. 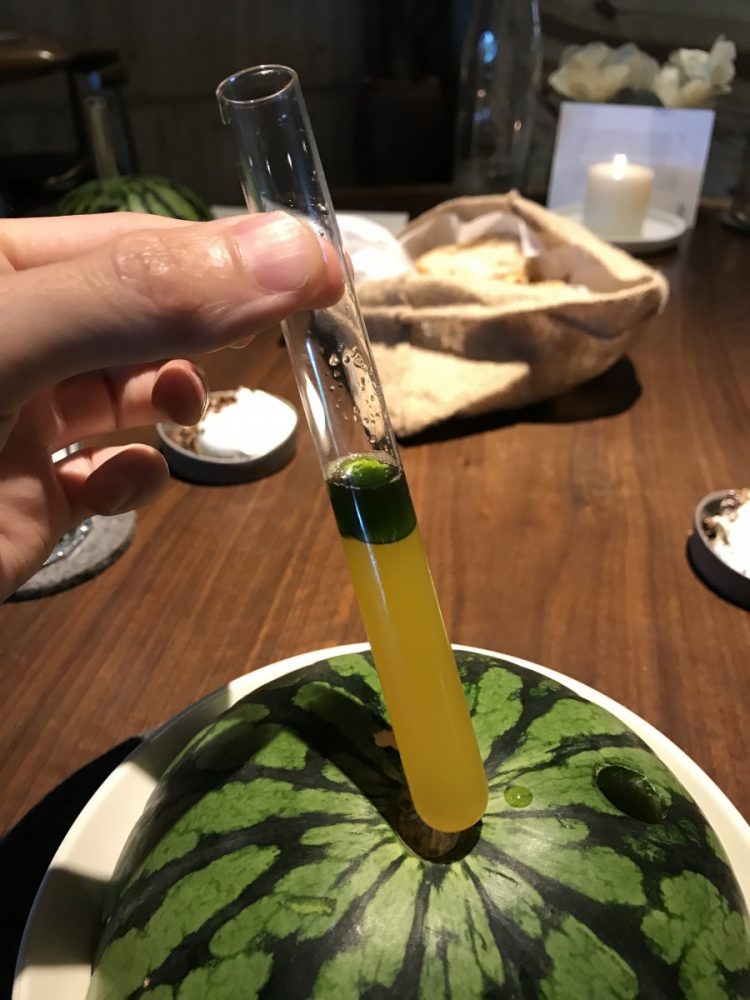 Underneath the watermelon was an even tinier watermelon on top of kanpachi and pink guava.  The seaweed was especially fun as it reminded me of baby grapes. 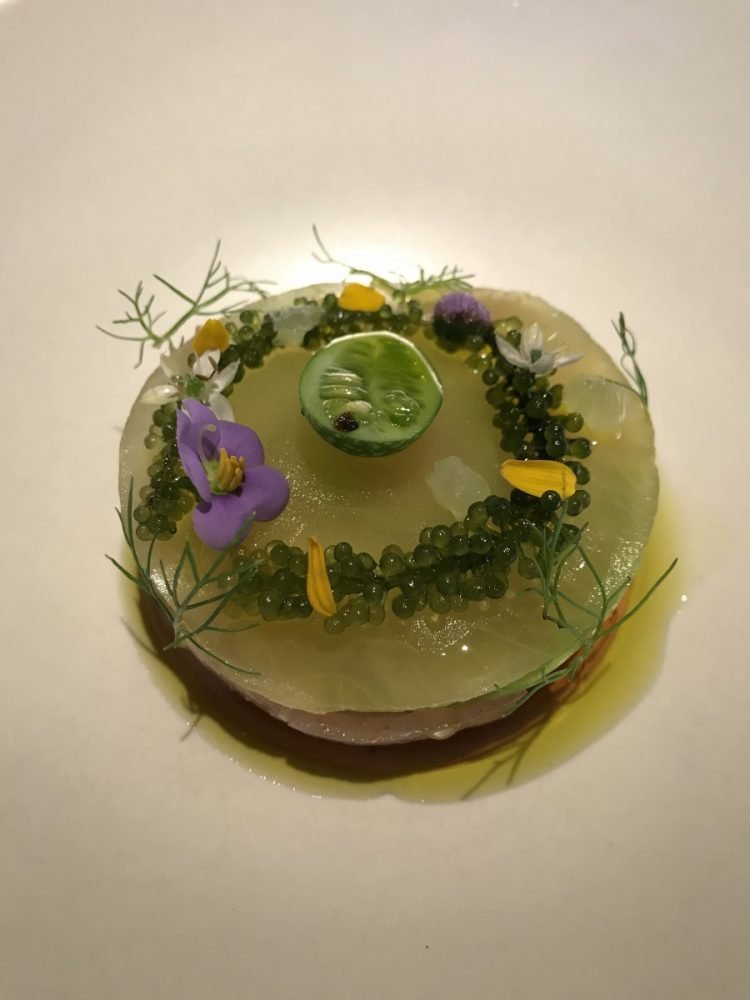 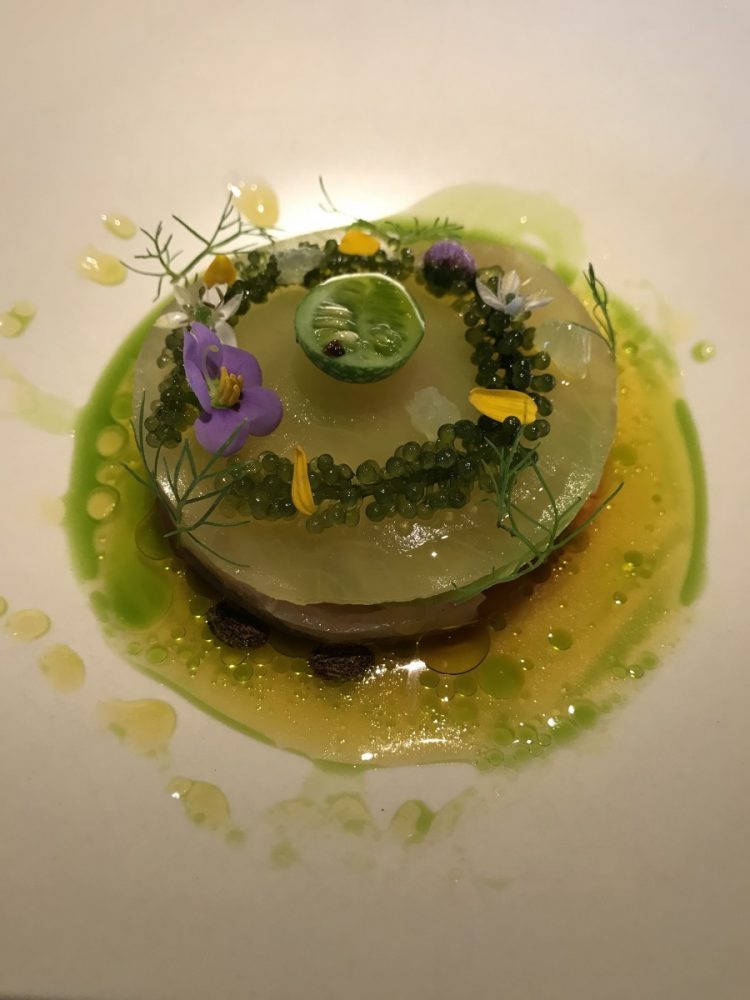 Because we were around during the Dragon Boat Festival, they brought out a mini Zongzi (粽子 / zong zi)—a common sight around Taiwan. This zongzi was special in that when it was placed in oolong tea, it started to smoke and spread the tea smell around (it was dry ice, but the effect was still cool).

The smell of oolong was paired with a creamy asparagus dish. 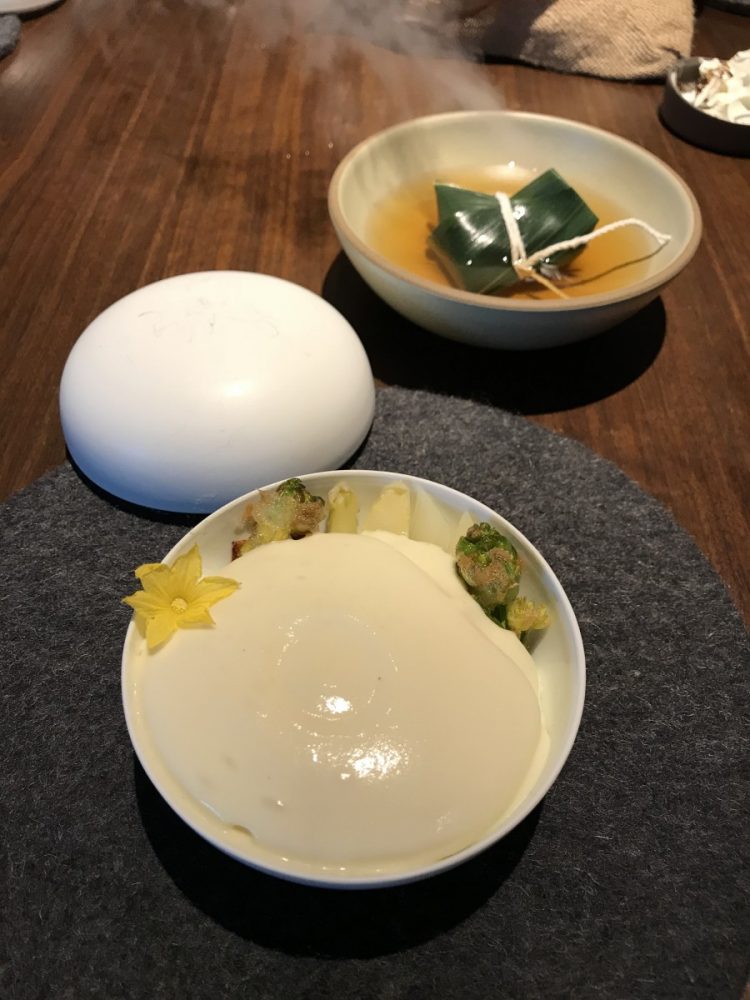 Next off this is oysters and kale on top of angel hair pasta. This dish was probably my least favorite if only because cooked oysters aren’t my go to dish. I loved the smattering of matcha powder around though. 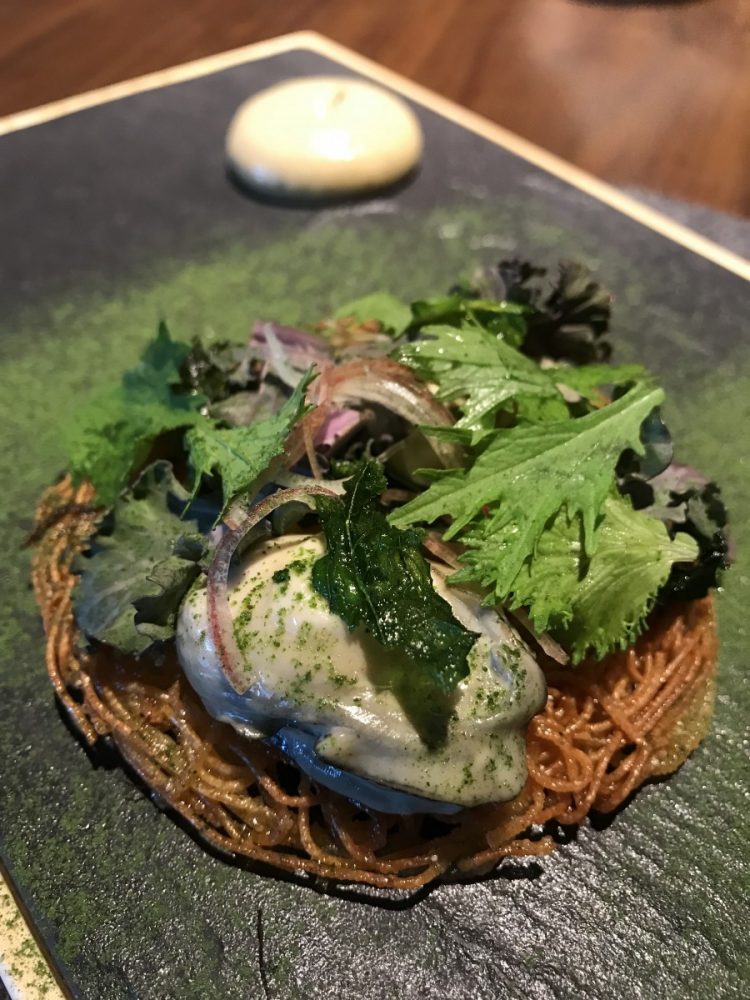 Going back to the chef’s garden, we were delighted with a consomme that had freshly picked zucchini. This was also paired with a stuffed zucchini flower and wrapped kaffir leaves. 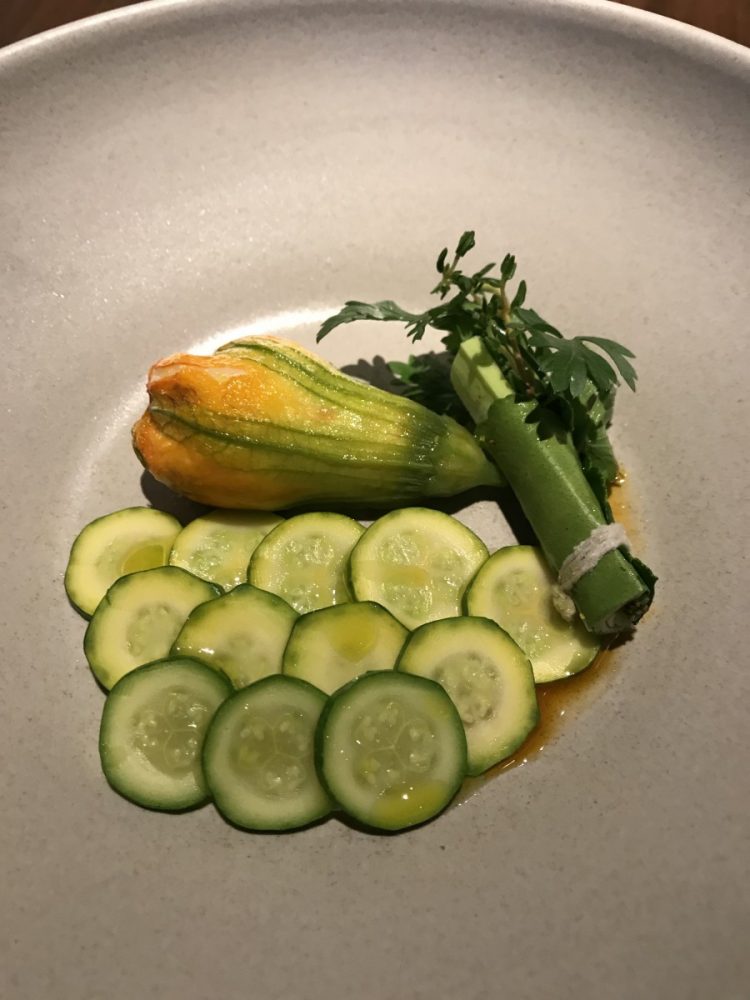 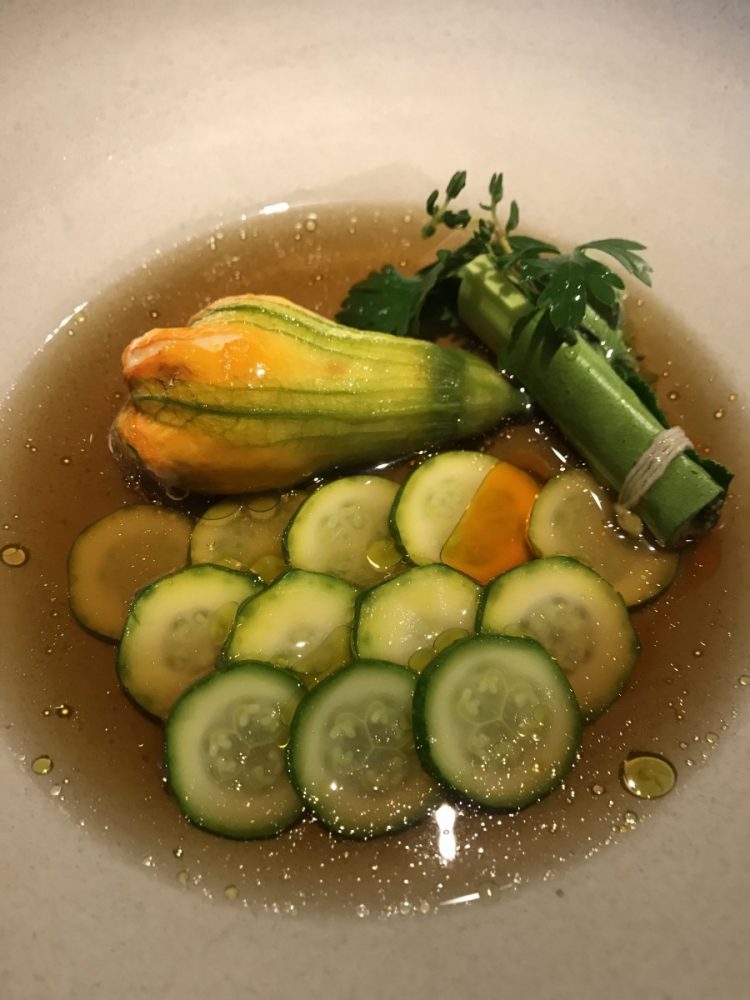 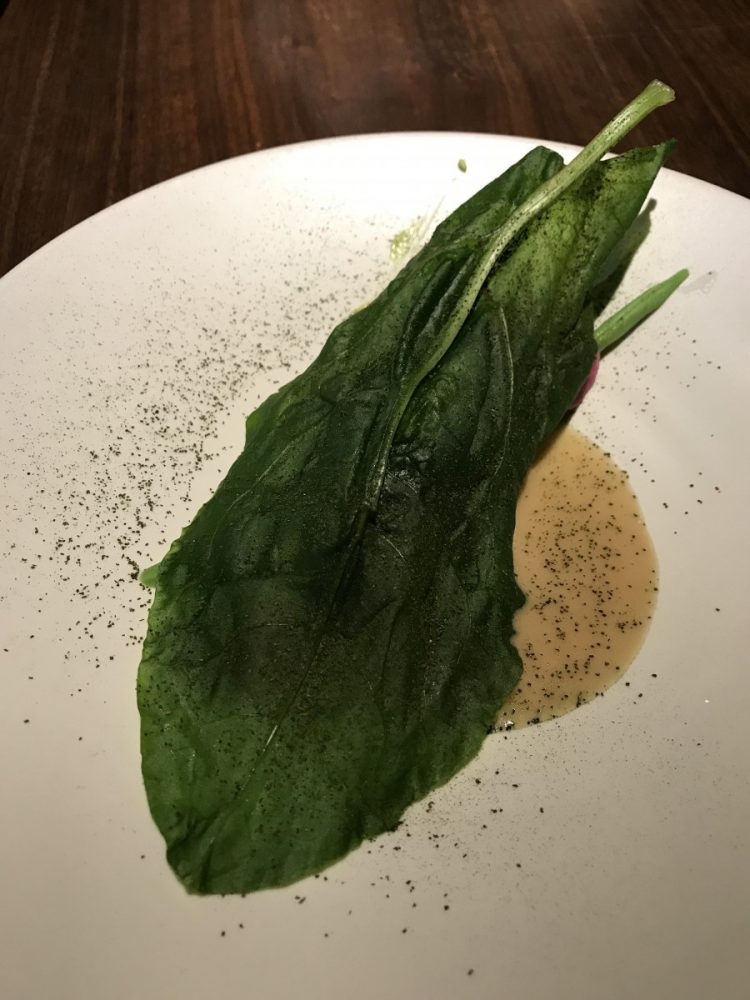 The bonito, for me, was done with green beans and radish. 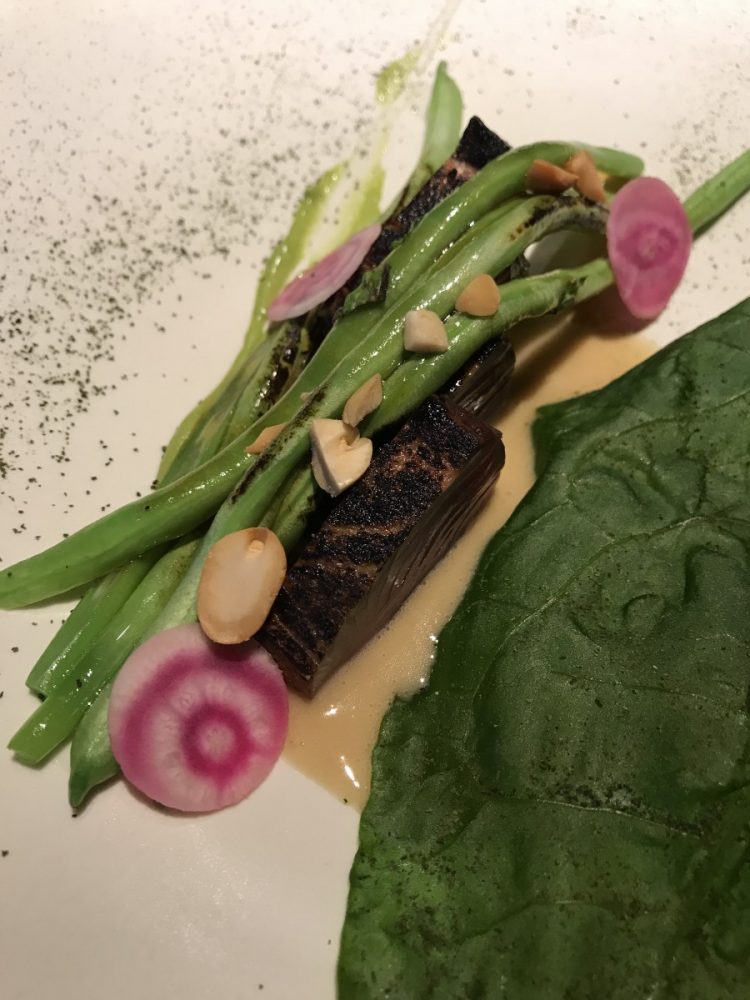 The main entree was a sight to behold with black radish, umami ketchup, and chicken that has black meat (and black bones). 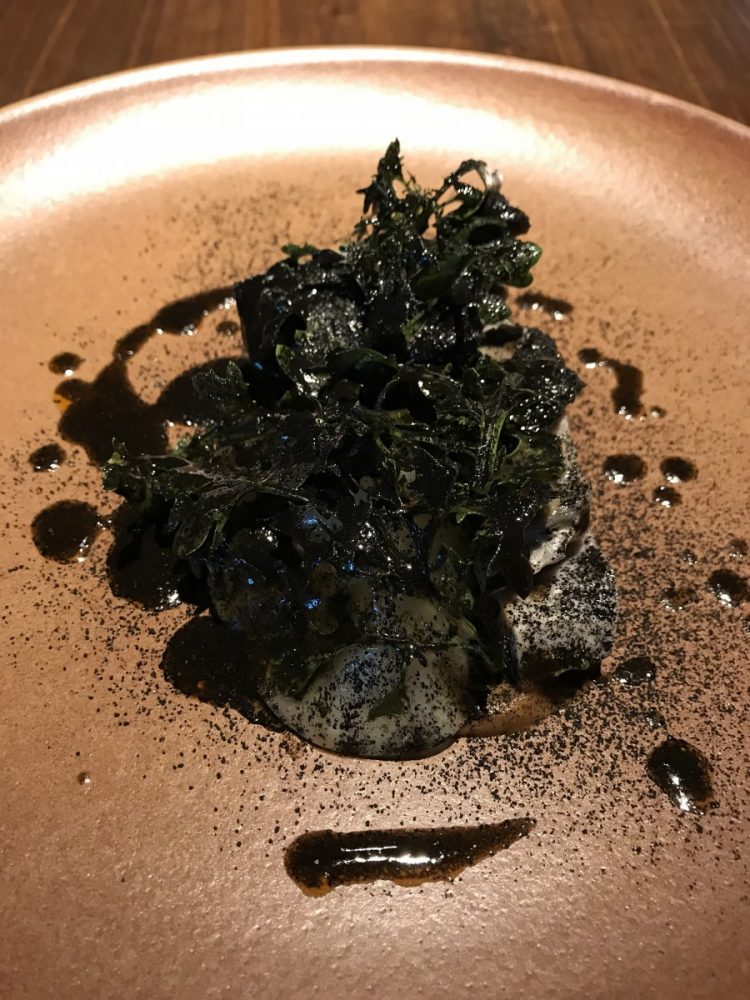 The next dish brought us out of the darkness. It featured fake rhubarb (which I’m still not really sure what it was). Out waitress said she would tell us the surprise, but she never did. It was tasted as fun as it looks. 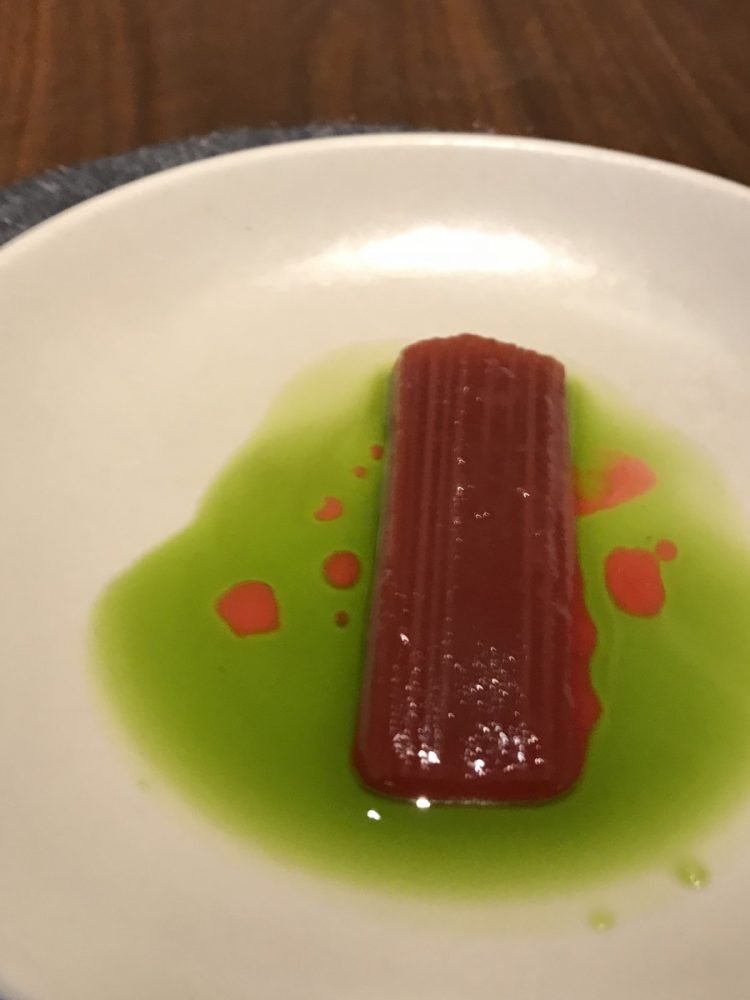 The last official dish was a sangria sorbet with red plums. The color on this dish was amazing. The flavor was well balanced with the wine standing out, just enough.

As we prepared to part ways, we were given these wafers filled with sweet potatoes. It was a nice way to cleanse our palates. 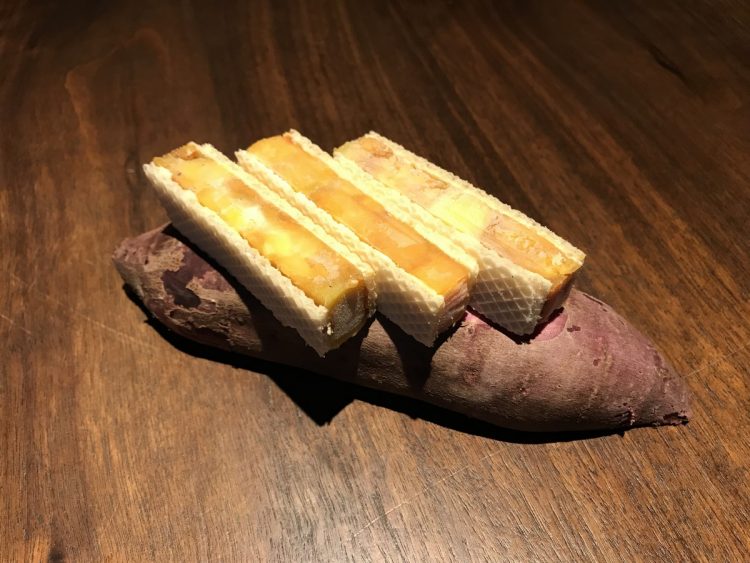 The art in the restaurant is striking yet simple. 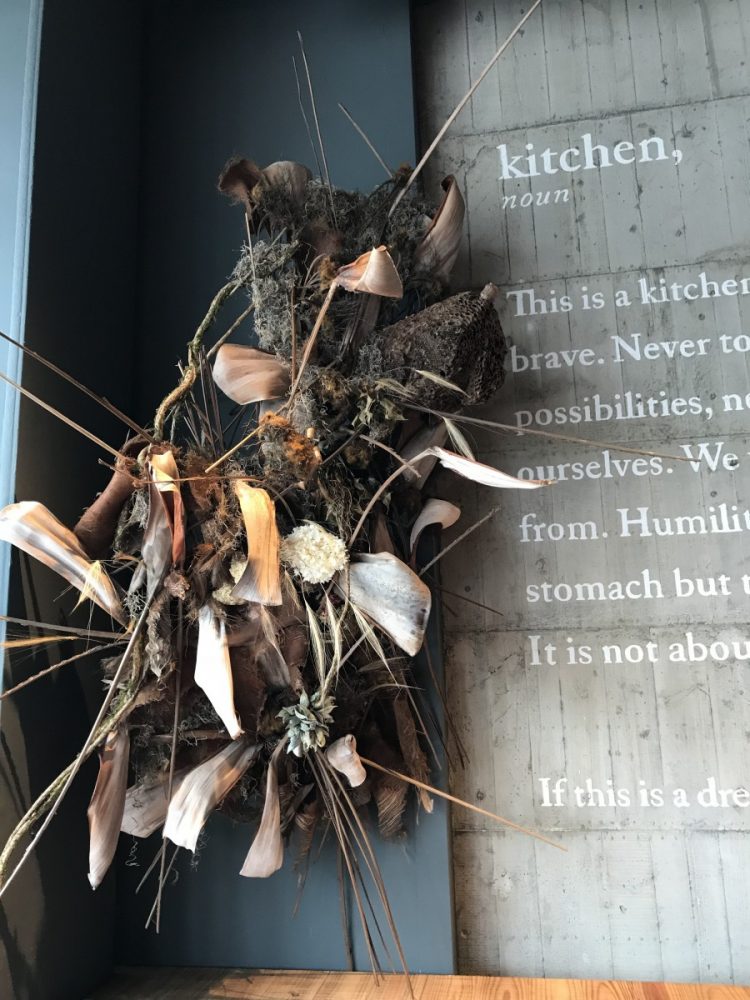 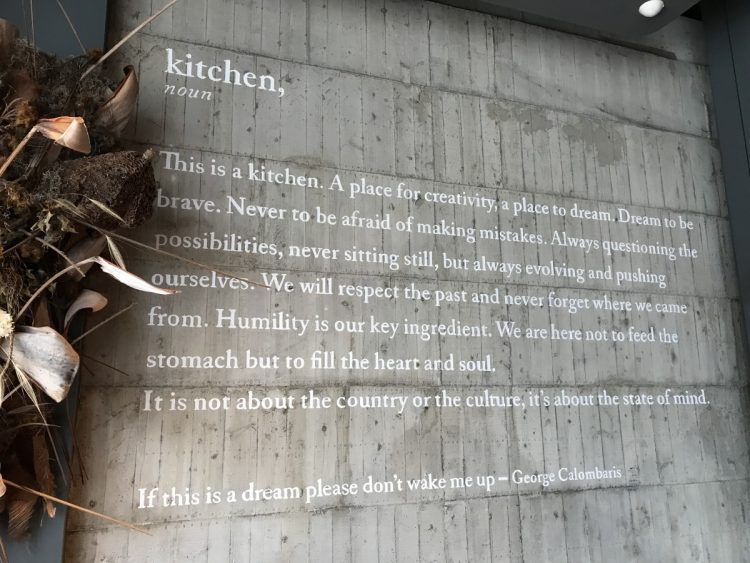 “Dream to be brave. Never to be afraid of making mistakes.”

This was probably one of the top dining experiences I’ve had. I’m interested in trying another menu sometime in the future if not another one of Chef Andre’s restaurants.

Have you been to RAW? What was your experience?