Eating my Way Through San Antonio

I recently had the opportunity to check out San Antonio, Texas.

It was the first time I had been to Texas outside of a layover so I was quite excited to check out the sights and flavors of the city. In this post, I’ll go over some of the top places I ate at while visiting the Alamo City, but first, a little more about the city.

San Antonio is a huge city at 1.5 million. I didn’t realize it until I was exploring plaques around the city that San Antonio is actually the seventh-largest city in the United States in terms of population (the next largest being San Diego, California).

The city was founded as an extension of the mission system along the San Antonio River in 1718.

Over the course of 300 years, it would fall under numerous governments and empires including the Spanish Empire, the Mexican Empire, Republic of Texas, and United States of America.

Today, the city is an amalgamation of cultures including strong German, Mexican, and Texan roots. Speaking of German roots, one of the first places that I ate at was German sandwich shop called Schilo’s. 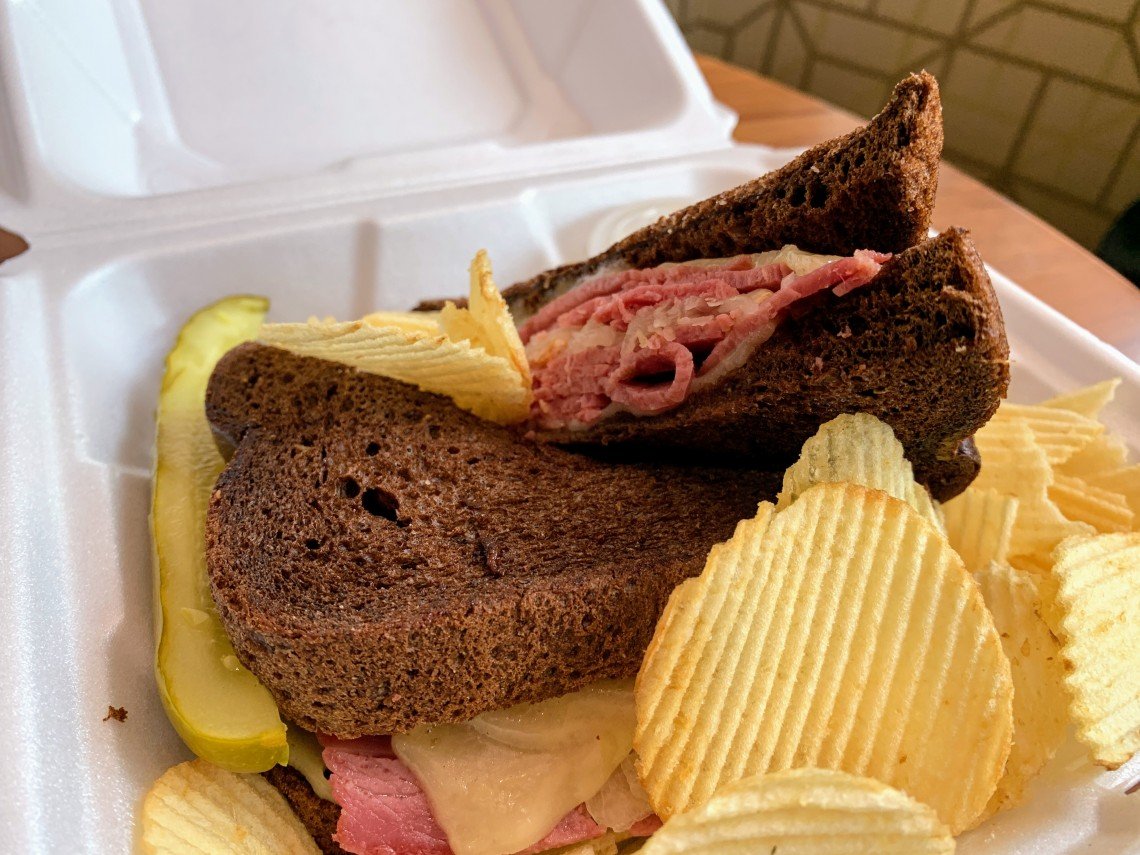 Touted as the oldest restaurant in San Antonio, Schilo’s dates back to the 1900’s when around half of the population was of German descent. Today, the restaurant serves hungry patrons in the downtown area, including the many visitors walking along the San Antonio River Walk.

Inside, dozens of artifacts retrace the history of the hundred-year old shop and local area.

When we visited, there was a line out the door, even at 11:30 am. Instead of waiting to get a table, we decided to order to-go and eat at our nearby hotel. We only had to wait around 15 minutes for our food to arrive. 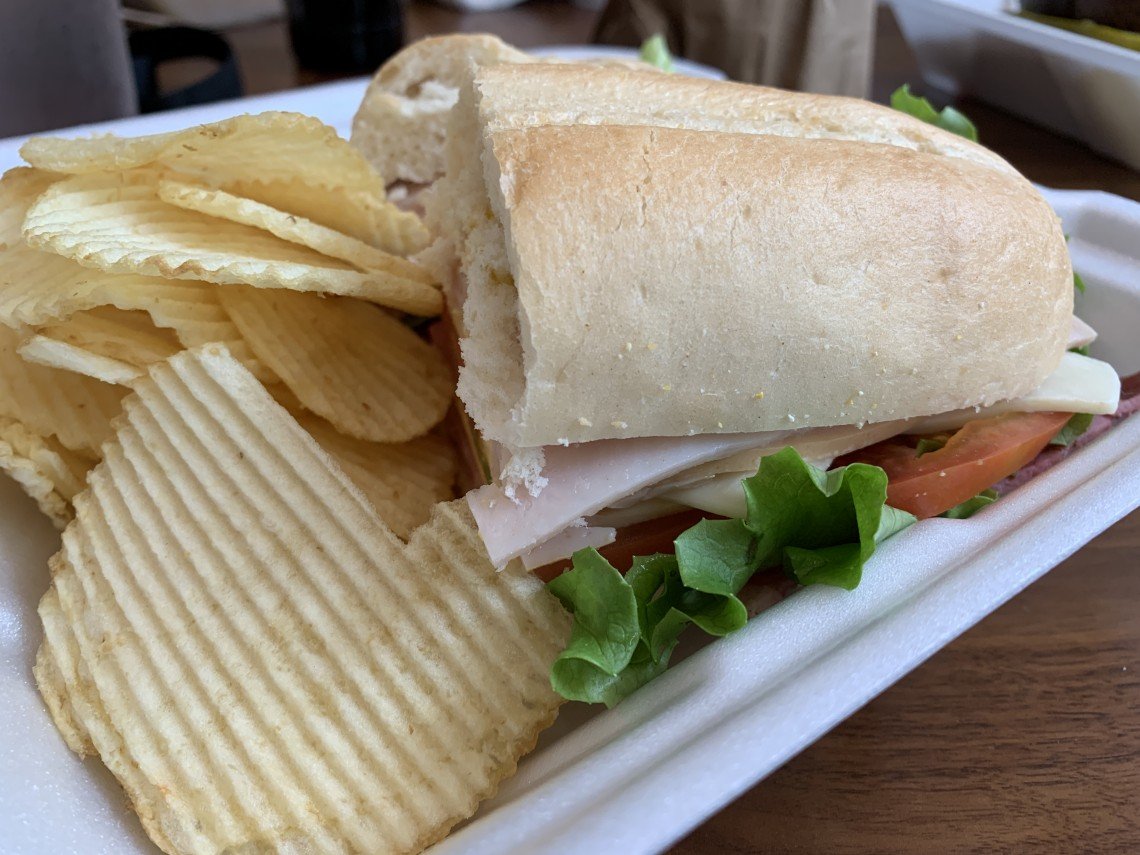 Schilo’s is known for a couple of items including their famous root beer (made with cane sugar), famous pea soup, and reuben sandwich with sauerkraut. We made sure to get one of each.

The pea soup was one of the thickest pea soups I’ve had. Having eaten half of my sandwich at the time, when I went to get a few sips of pea soup, I quickly found myself full—not able to finish the rest of my sandwich. It was pretty good. It reminded me of a thicker version of Pea Soup Andersen’s.

The reuben sandwich was nice too. The meat was soft and flavorful. You can request some of their spicy mustard which was a nice (albeit super eye-watering) touch. I wish the sauerkraut was a little stronger in flavor, but it might have been the Swiss Cheese overpowering the sandwich.

Overall, I would recommend checking out Schilo’s if you’re in the Downtown San Antonio area. I, personally, would like to try other items on their menu and experience dining in.

Located within La Villita Historic Arts Village (a short walk away from the Henry B. Gonzalez Convention Center), La Villita Cafe is a small restaurant good for breakfast and lunch. The location makes it perfect for relaxing meal away from the hustle and bustle of the nearby The River Walk.

Though they have standard American fair, like eggs and homestyle fries, they also have many dishes with a Mexican flair including Santa Ana Rancheros Plate (eggs with refried beans, salsa, and tortillas).

La Villita Cafe was a great way to kick off the morning before a full day of adventures.

After getting a meal here, don’t forget to walk around the art village to check out the cool local wares artists are selling. 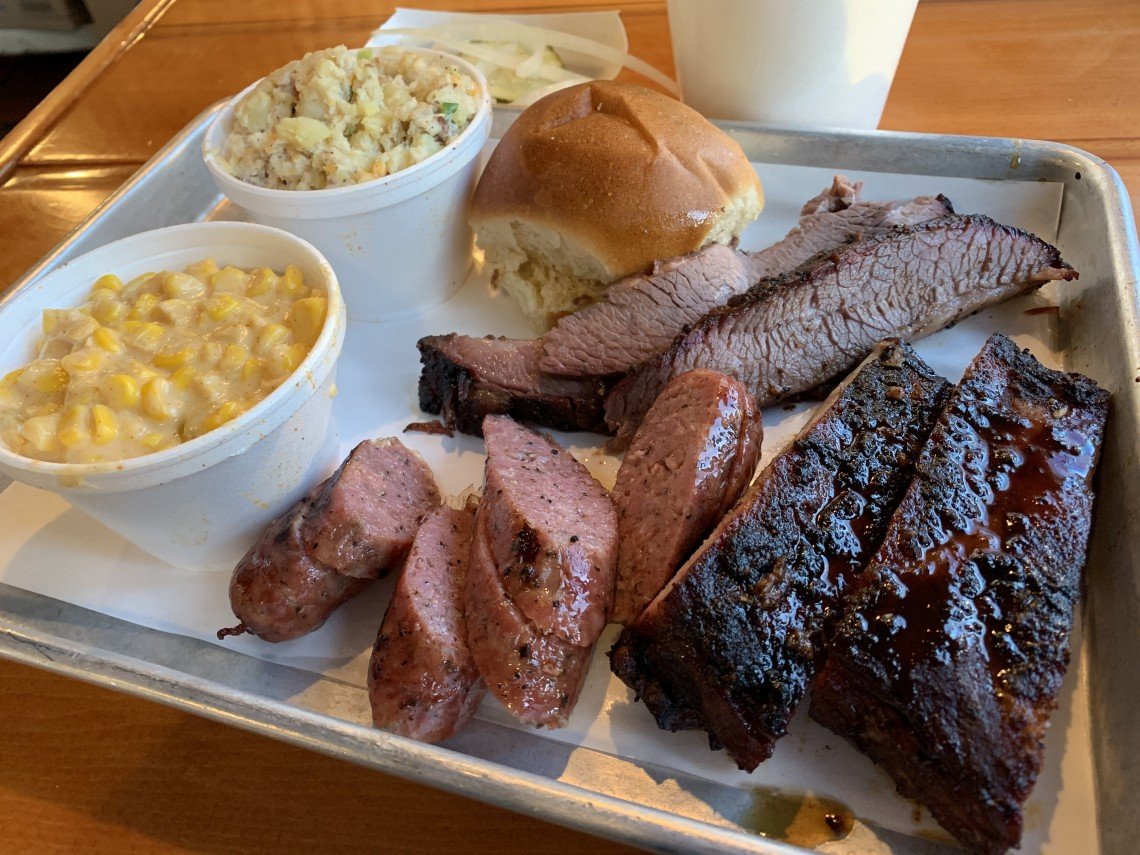 When in Texas, you have to try the barbecue, right?

One of the first things I did when coming into San Antonio from the airport was ask our Lyft driver what his recommendations were for best barbecue place. On this list was a funny sounding place called Dignowity Meats—will have to give this place a try in the future.

Because of our itinerary, we went to a place, instead, called Smoke Shack.

Voted Best BBQ in San Antonio by locals, I was super pumped to sink my teeth into delicious barbecue. 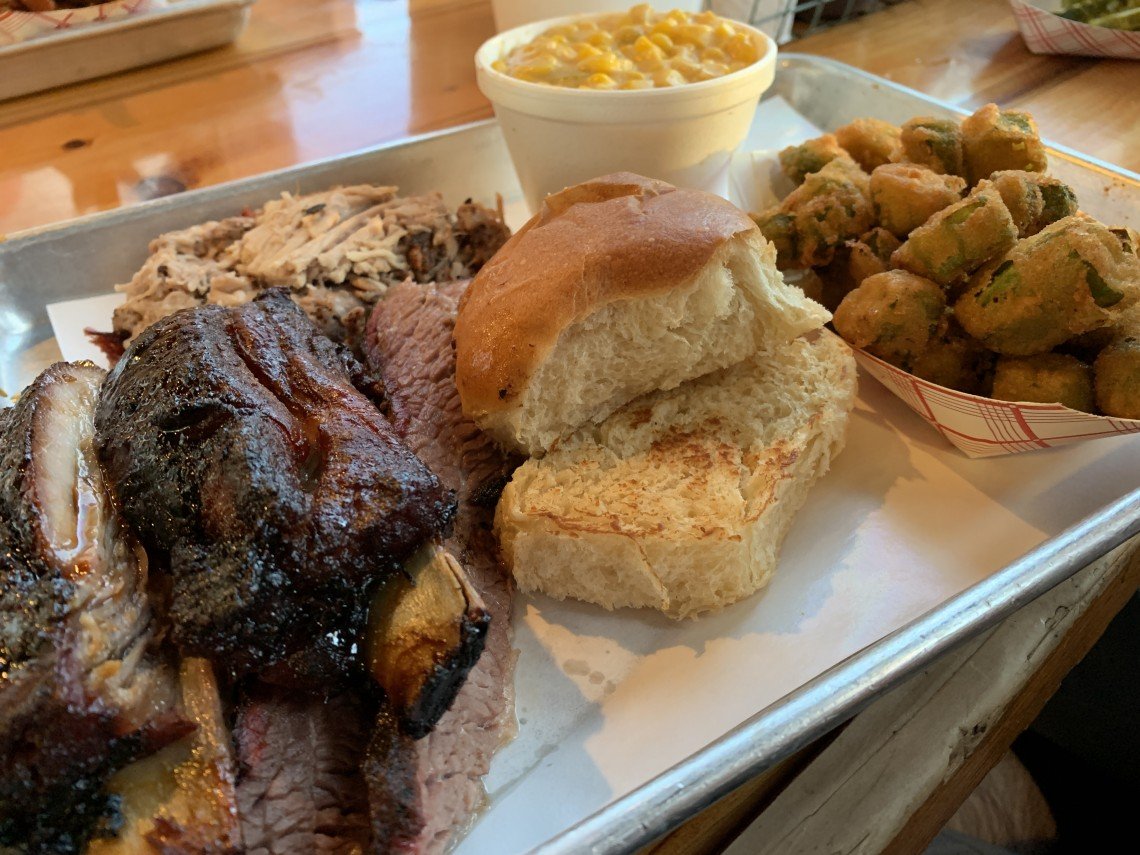 We arrived right before the dinner crowd and only had to wait a few minutes before ordering. We ordered a couple of plates with free meats. Coming from San Francisco, the $15 price tag for all of this seemed like a steal.

It may have been a bit more than we could chew with all of us having leftovers.

Regardless, from the ribs that fall off the bone to the fried okra, I was quite happy. One of my friends commented that the brisket was a little dry, but I didn’t notice.

With the plate, you also get a Texas-sized cup that you can fill with lemonade, water, tea, or sweet tea. I made myself an Arnold Palmer and shoveled some free pickles onto my plate before sitting down. The BBQ sauce is on the table, so that you can easily pour it or dip it as you go.

I thought this was a solid barbecue restaurant. My only gripe is the use of styrofoam but this seems to be more of a city-wide thing than just this shop using a lot of it. 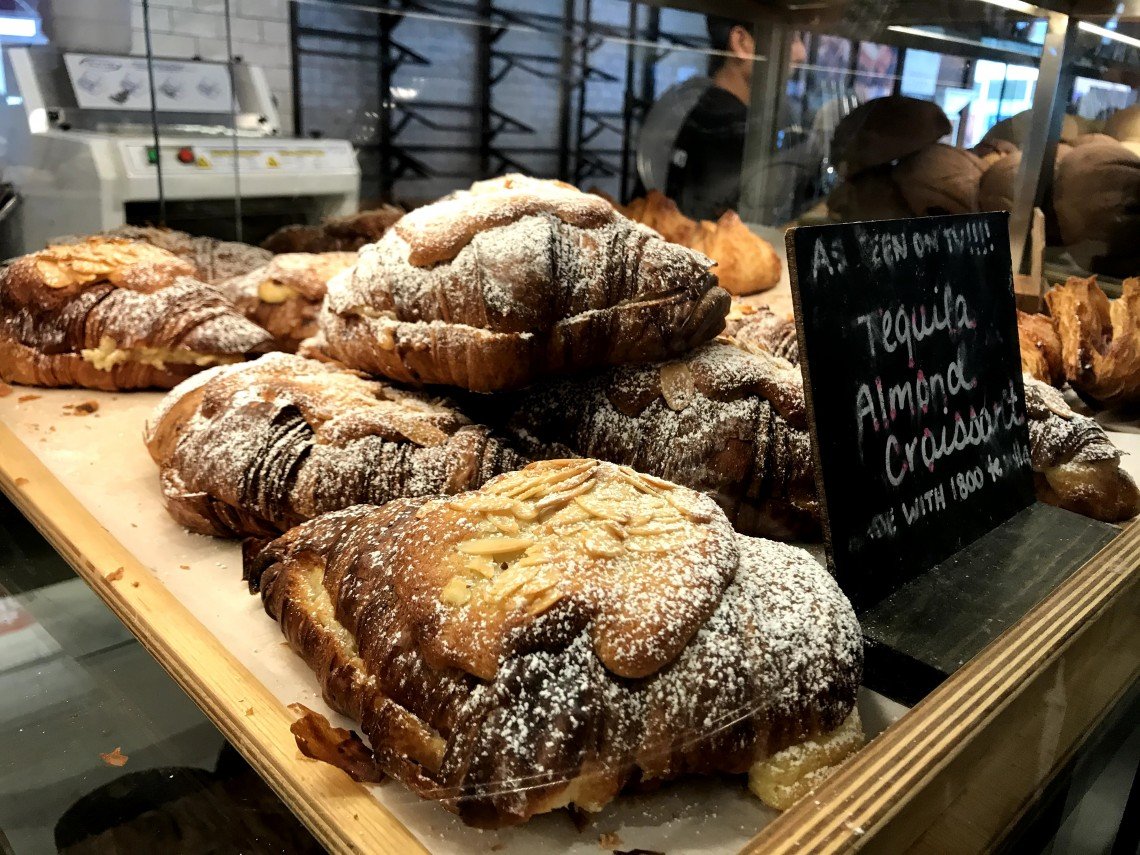 For breakfast, we stopped by La Panaderia for some Mexican-style treats. La Panaderia is a local bakery located two blocks away from the San Antonio River Walk. It features sandwiches, coffee, local sodas, and mimosas. Perhaps their biggest draw are their baked goods. 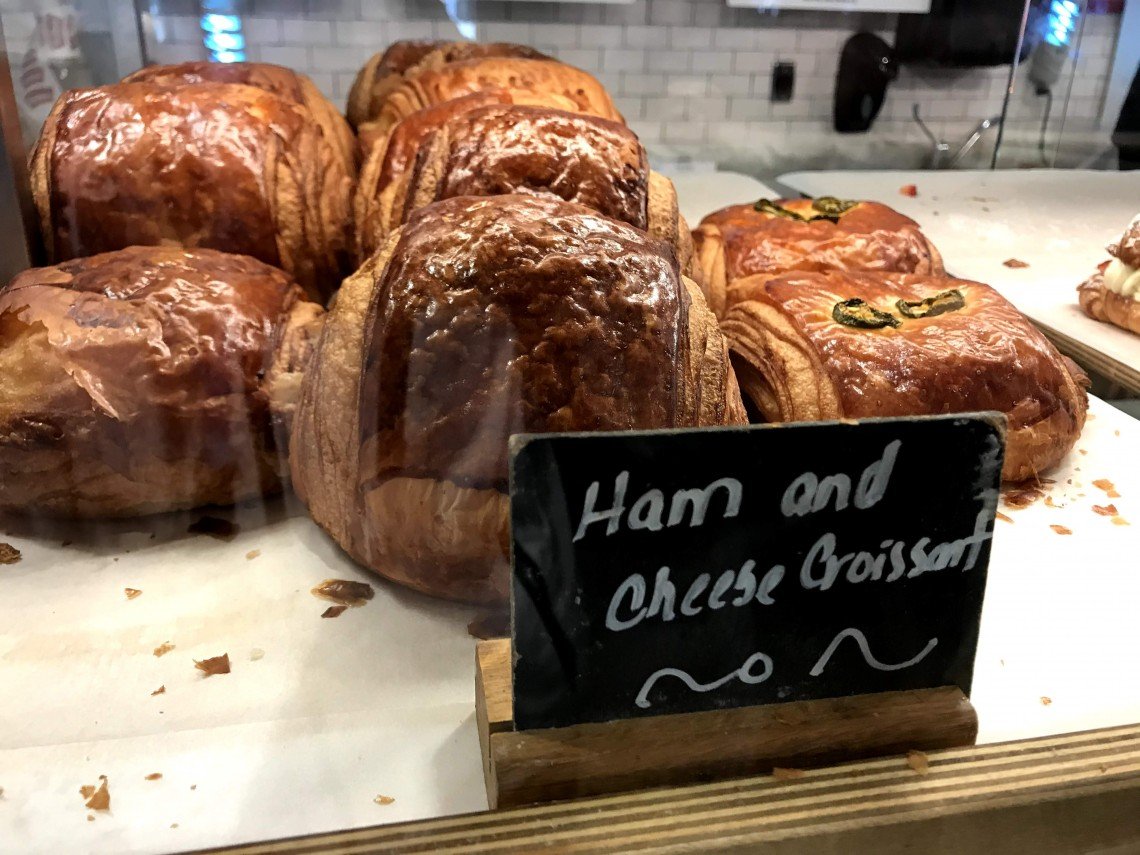 From conchas to Tequila Almond Croissants and everything in between, you’ll want one of everything. 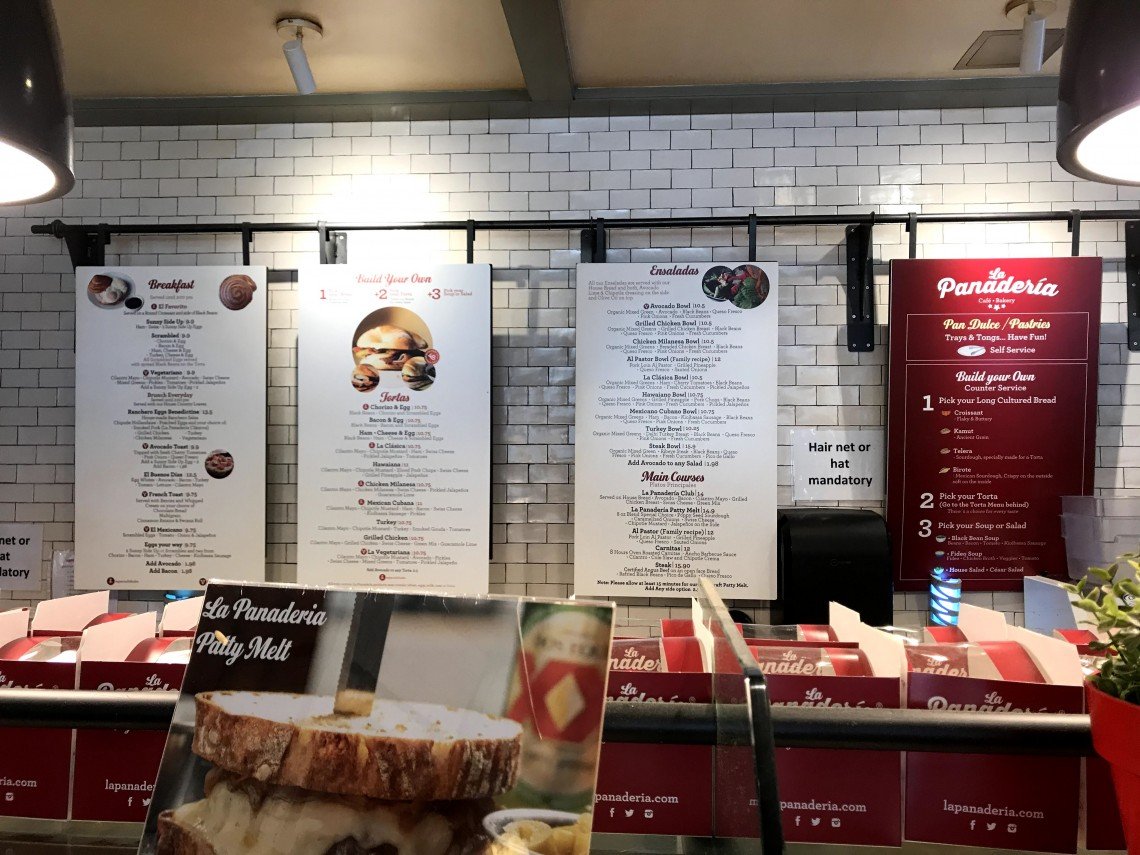 We picked up a few baked goods and salads to eat as brunch before going out. 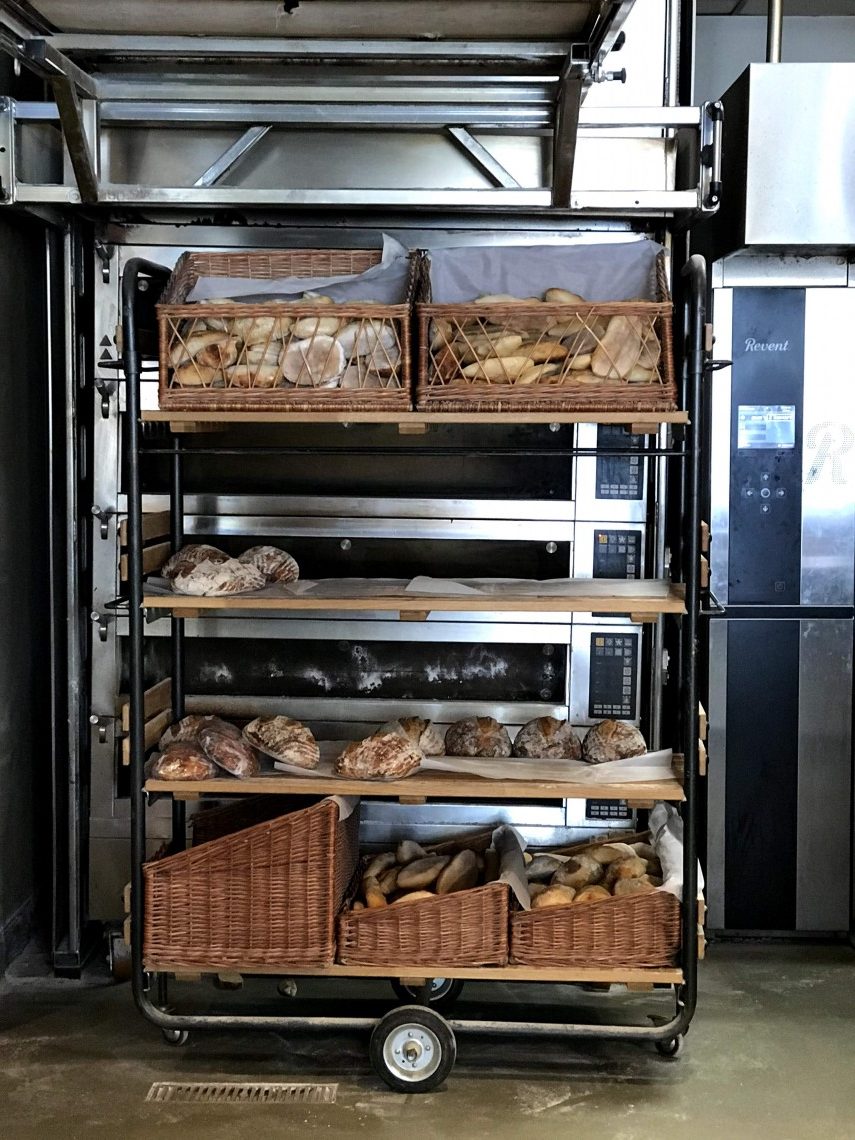 Here are some of their fresh breads, which I can imagine are amazing.

There’s a refrigerated area that holds cakes including their famous tres leches. 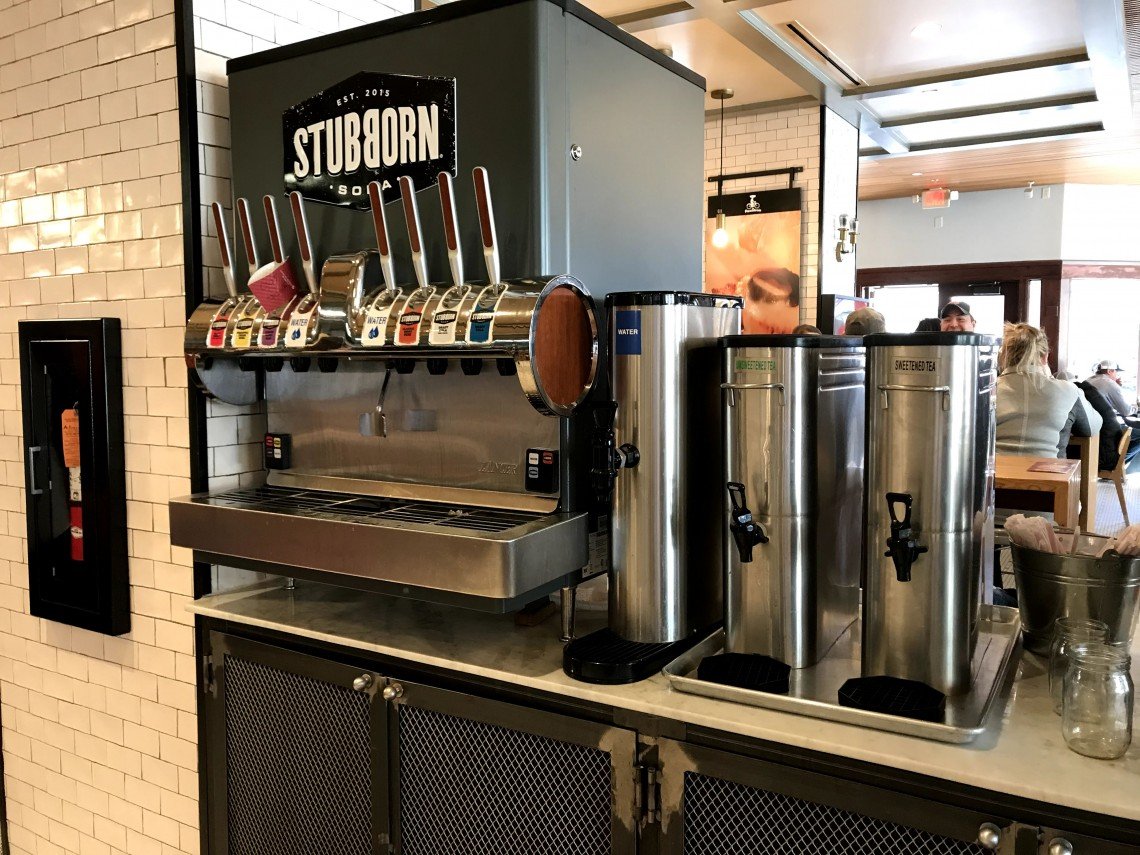 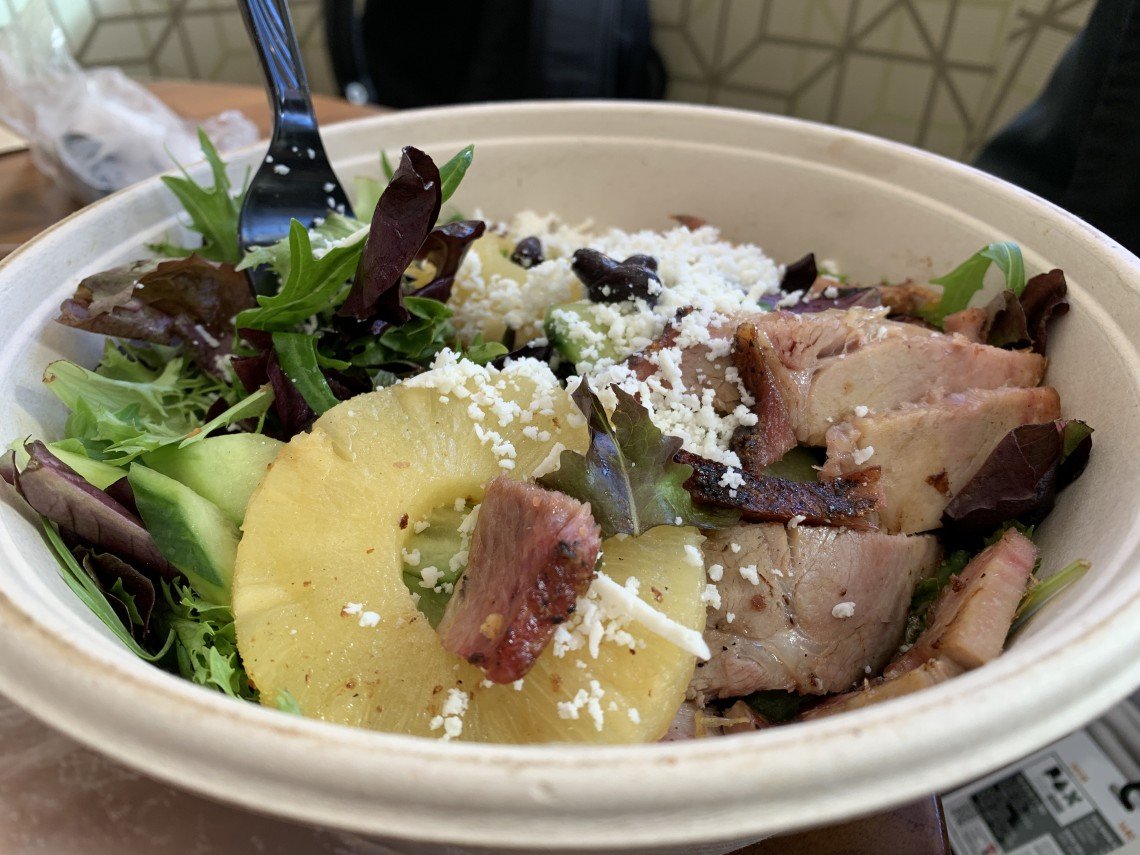 I got a Hawaiian bowl. I didn’t use any dressing, but I still enjoyed it. The meet was a nice addition and the vegetables were crisp. 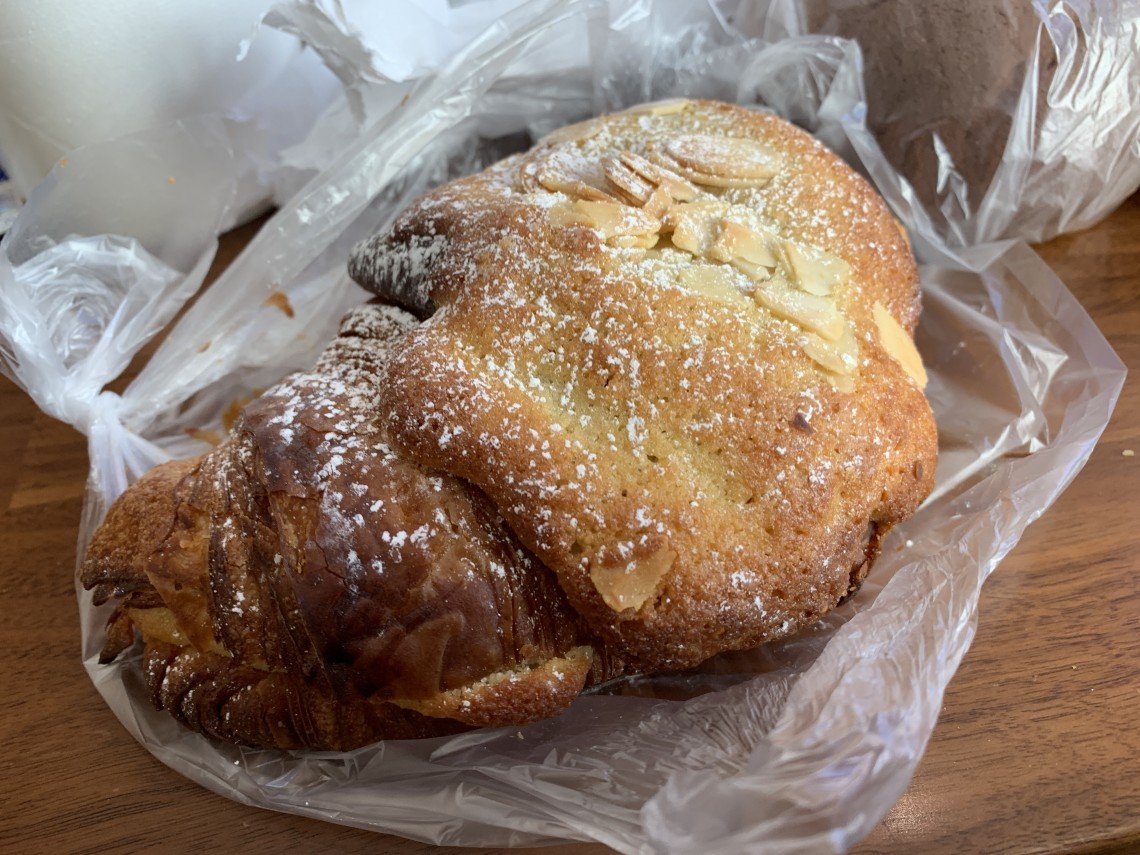 The Tequila Almond Croissant was the most flavorful item we got—possibly too flavorful? After enjoying our salads, the flavor came as a bit of a shock to all of us. It’s good, but it’s definitely more on the stronger and sweeter side of croissants I’ve had.

Overall, I would recommend dropping by this bakery. It has a very elegant and professional vibe, much like Porto’s in Los Angeles. It’s also a short walk from the River Walk in downtown San Antonio.

Not surprisingly, we had to give it a try, especially since it was a stone’s throw away from Schilo’s. 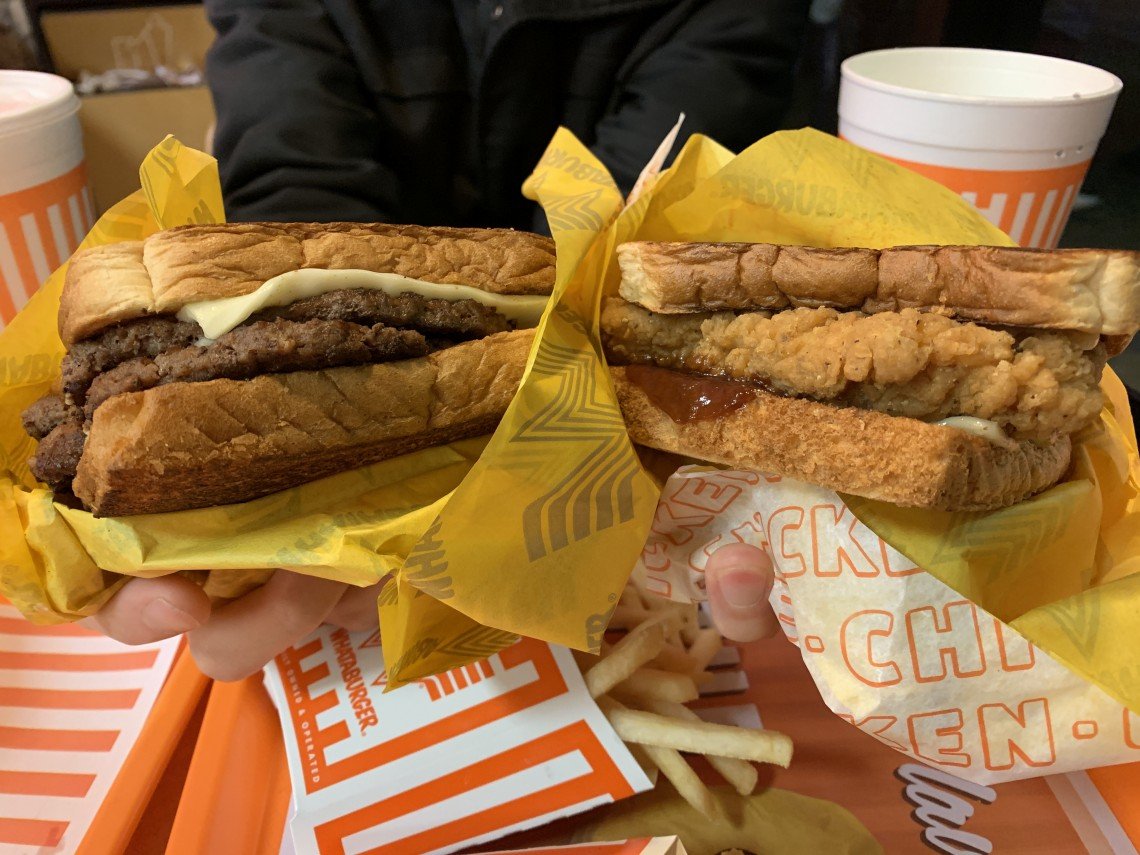 We got two combo meals which came with huge fountain drinks. 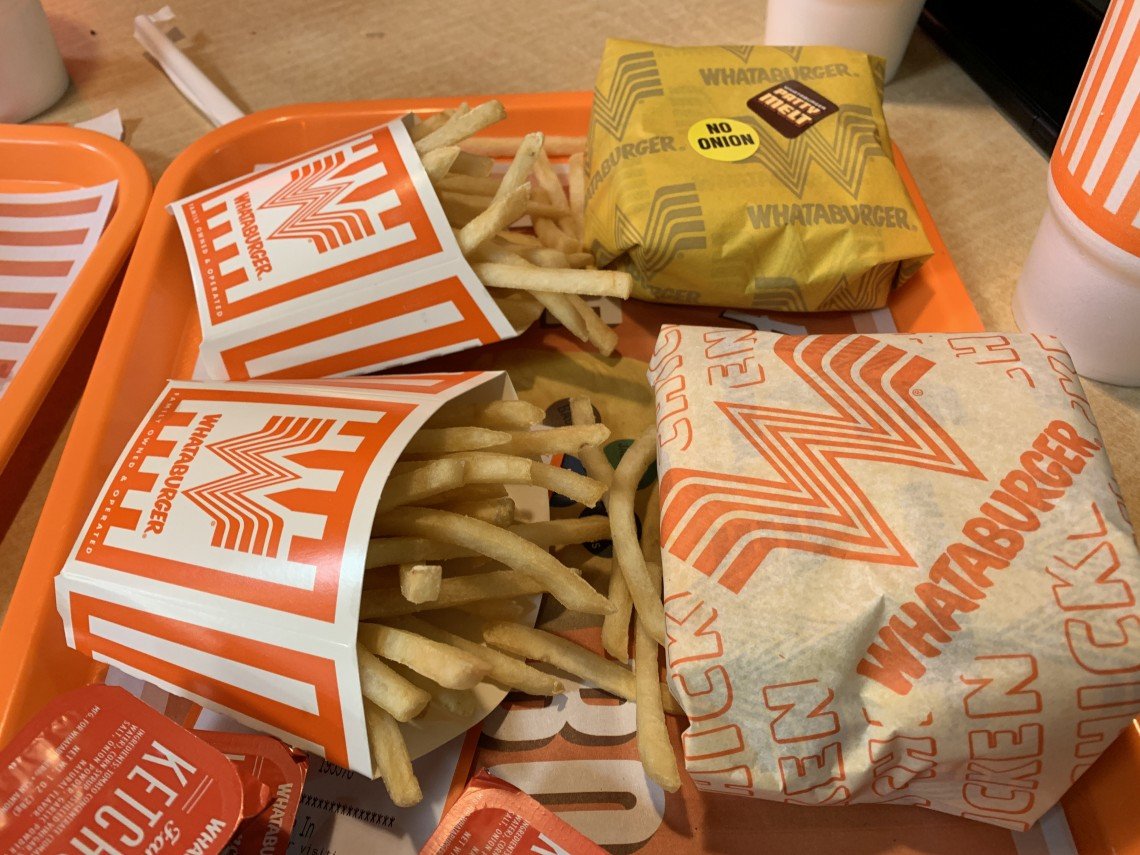 The rest of the meal was pretty average-sized and I was thrown off by how wrinkly the bread looked.

What wasn’t average was the taste of the meal. I ordered a patty melt and was pleasantly surprised at how good it was. If you’re looking for a quick meal and find yourself choosing between McDonald’s or this, I would go with Whataburger.

Are they better than In-N-Out? For me, that’s debatable, but I definitely think they can stand on their own amongst the many fast-food burger joints out there. 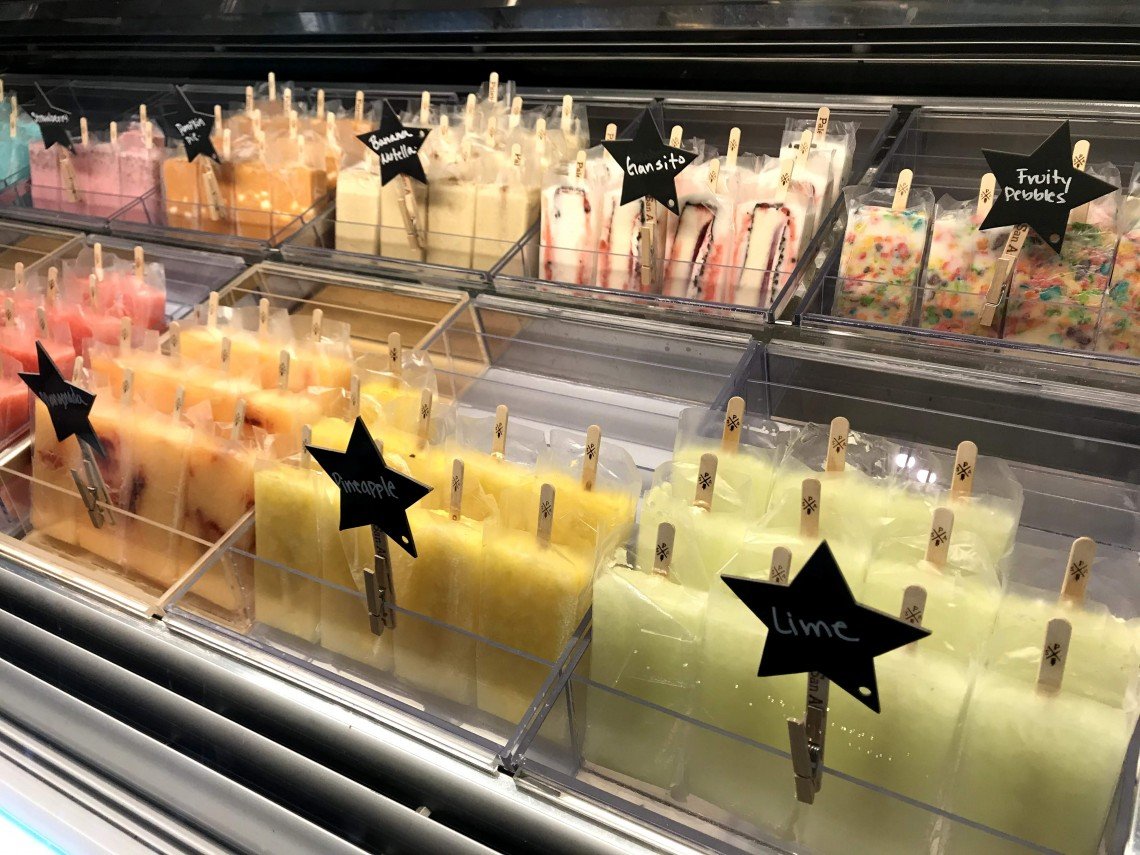 Owing to its strong ties to Mexico, Mexican food is everywhere in San Antonio. There’s even a term for this combination of Mexican-Texan food—Tex-Mex cuisine. Having been to a Mexican bakery and had Tex-Mex style breakfast, I thought it would be fun to check out a paleteria for dessert.

We stopped by the local, family-owned Paleteria San Antonio to see what the local area had to offer.

A paleteria is a popsicle, ice lolly, or ice pop vendor. They sell paletas.

Many paletas are milk-based but some are water-based. Flavors often range from more Mexican flavors like chamoy to standard flavors like strawberry. 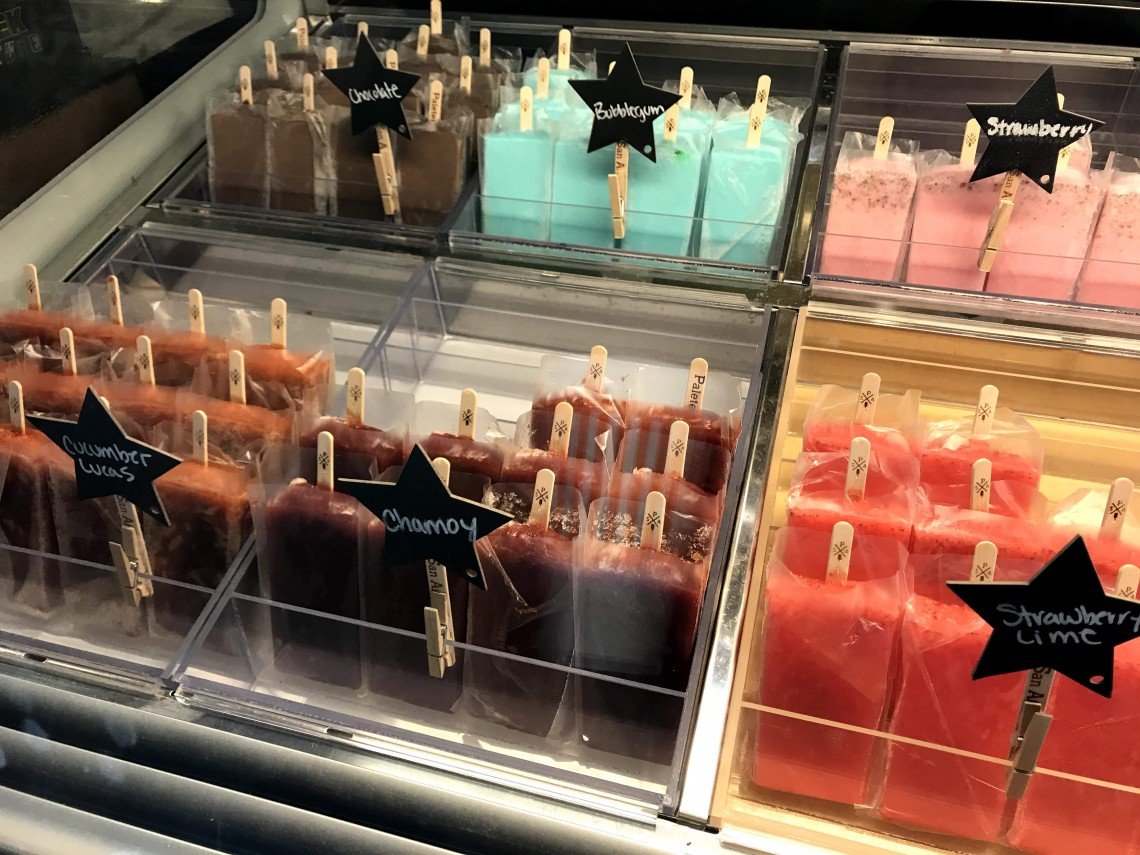 At the time, there were a bunch of cool flavors to try. 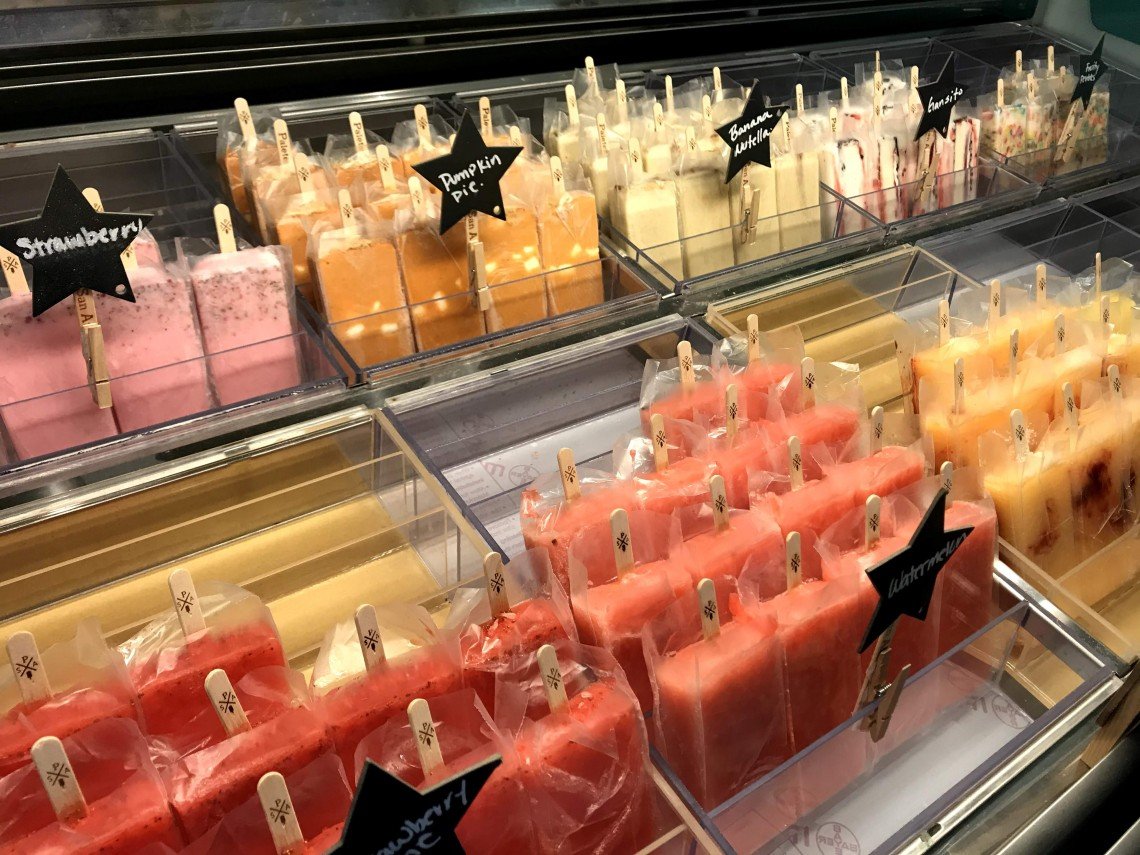 We ended up going with a chamoy, strawberry lime, and strawberry paleta. It was a fun, refreshing, and relaxing way to end the day—enjoying popsicles with friends.

Paleteria San Antonio is located in the giant HemisFair park on the very westernmost point. 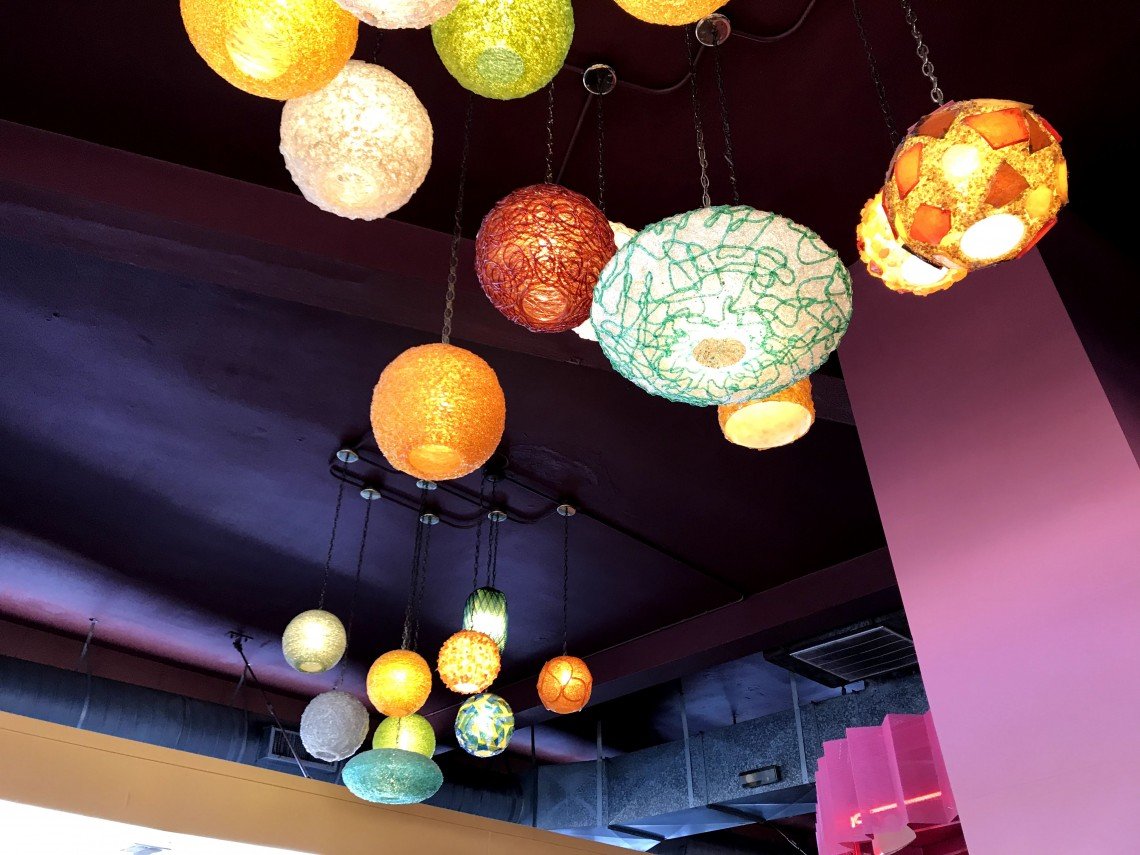 Having tried a variety of different foods in San Antonio—German, Mexican bakery, BBQ—one remained illusive to us, dedicated Tex-Mex cuisine.

To satiate our hunger, we dropped by Rosario’s on South Alamo.

Rosario’s is a quirky restaurant with a fun interior. Immediately when I saw the hot pink color scheme and Frida Kahlo, I got excited about what was in store.

Reading the menu, it was hard to choose what to get. I settled on the Enchiladas de Mole. We also got a side of shishito peppers and a Puffy Taco Plate. 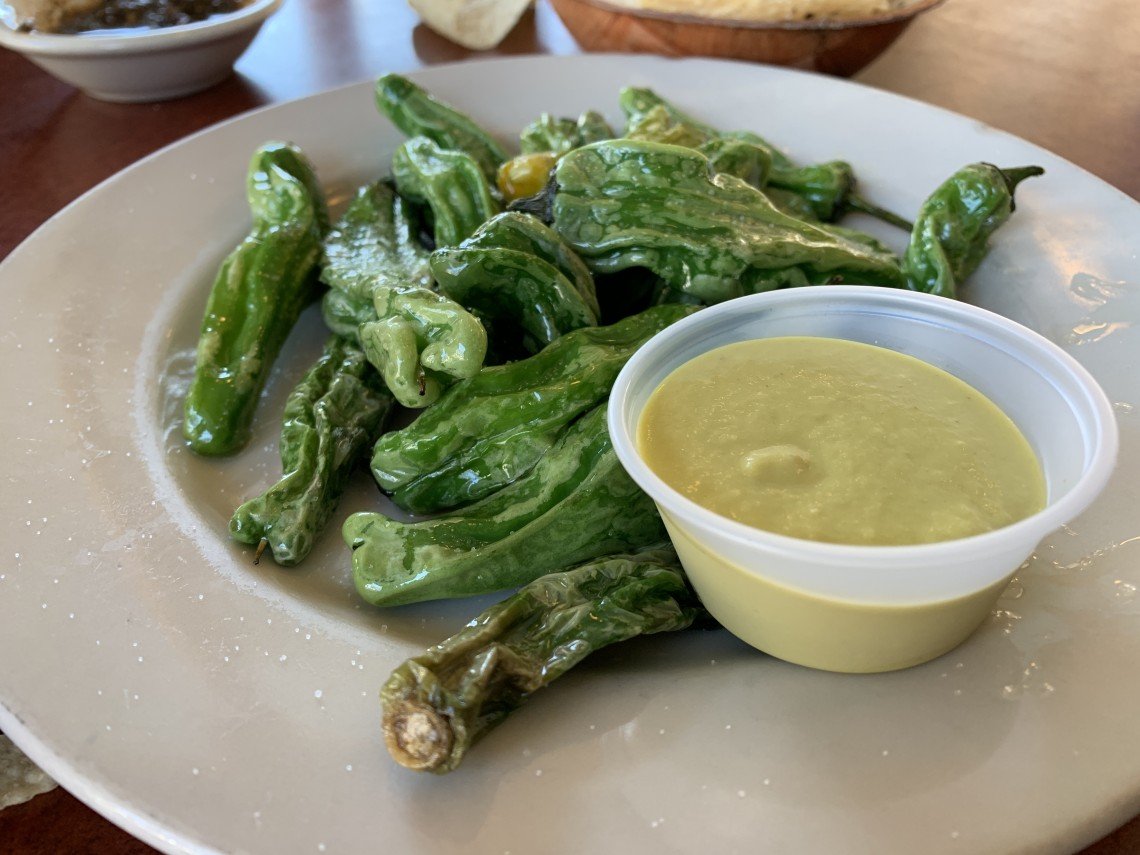 I didn’t have any of the salsa, but the tortillas were so soft and fluffy.

My enchiladas were probably some of the best I’ve had. The peanut mole sauce was amazing. Even after I finished eating everything on my plate, I used the side tortilla to mop up the mole into my mouth.

Here are the tacos. I thought they looked cool!

Rosario’s was probably the best meal I had in San Antonio. It was the perfect way to end my short San Antonio trip. Though it’s a farther walk from the San Antonio River Walk, it’s well worth the trek.

Definitely give this restaurant a try if you’re visiting the Alamo City.