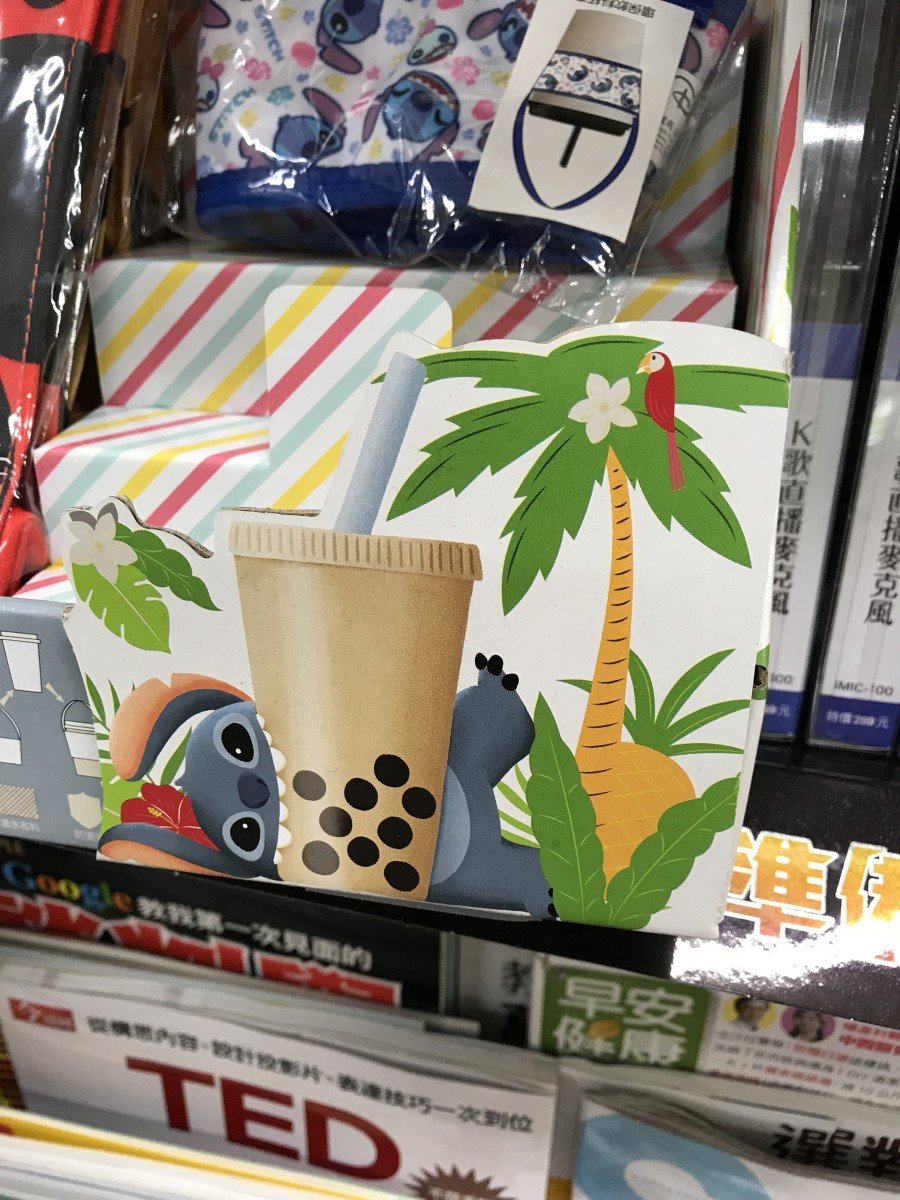 Boba is everywhere in Taiwan.

In Taipei, near Gongguan Station (公館站 / gong guan zhan), a specific type of milk-based tapioca drink holds a special place for many locals—including the nearby National Taiwan University students.

For the uninitiated, it seems like a strange combination—especially if you take the frog egg aspect at face value.

I had seen this drink time and time again at the various night markets in Taiwan. Each time I saw a sign with frogs and eggs (admittedly) I would wince, thinking about what the drink might taste like. I didn’t think that I would go out of my way to experience the drink, until I accidentally experienced it.

When I arrived, reading the menu, I made the connection between the two drink names. Oddly enough, I was still excited to try frog eggs at this point since friends had highly recommended it. 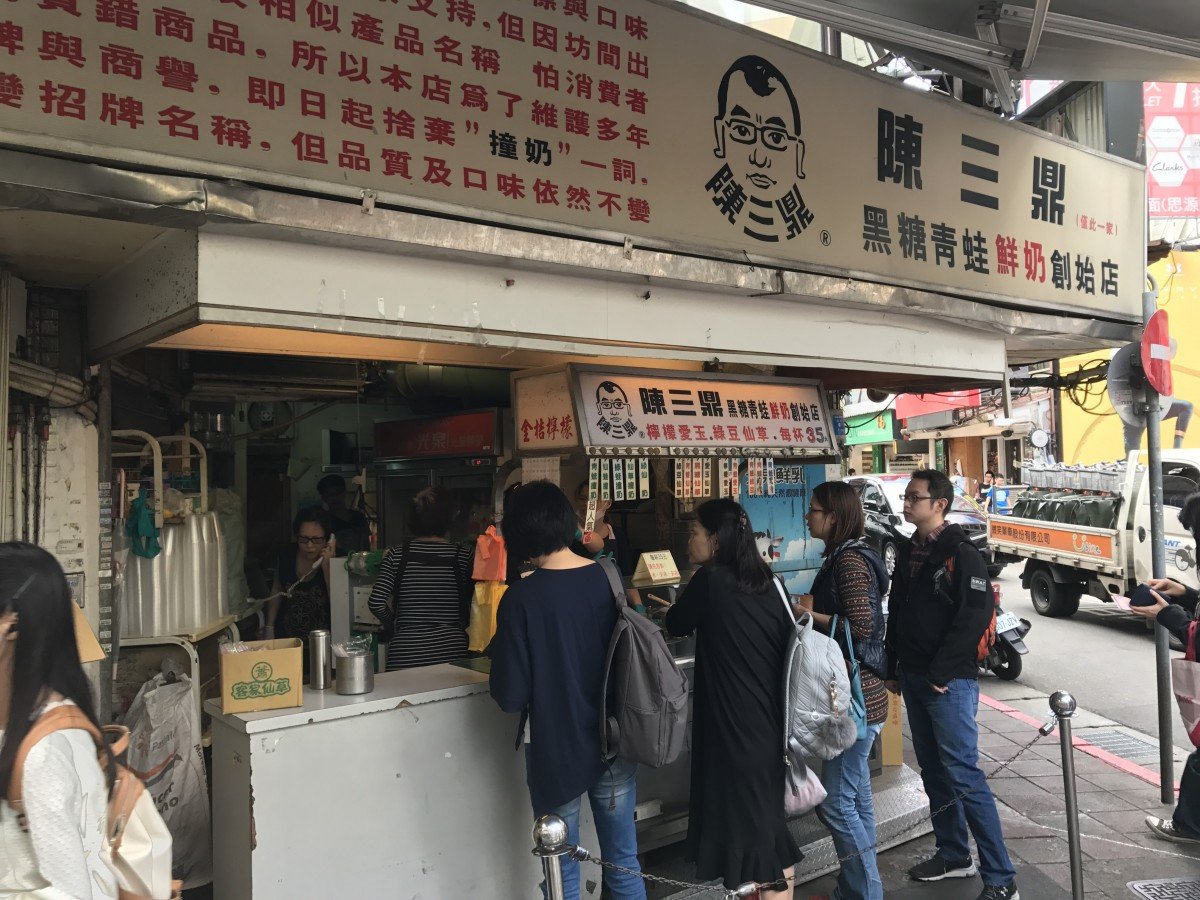 The line is pretty simple. Though there was a small crowd, it didn’t take too long to receive the drink. 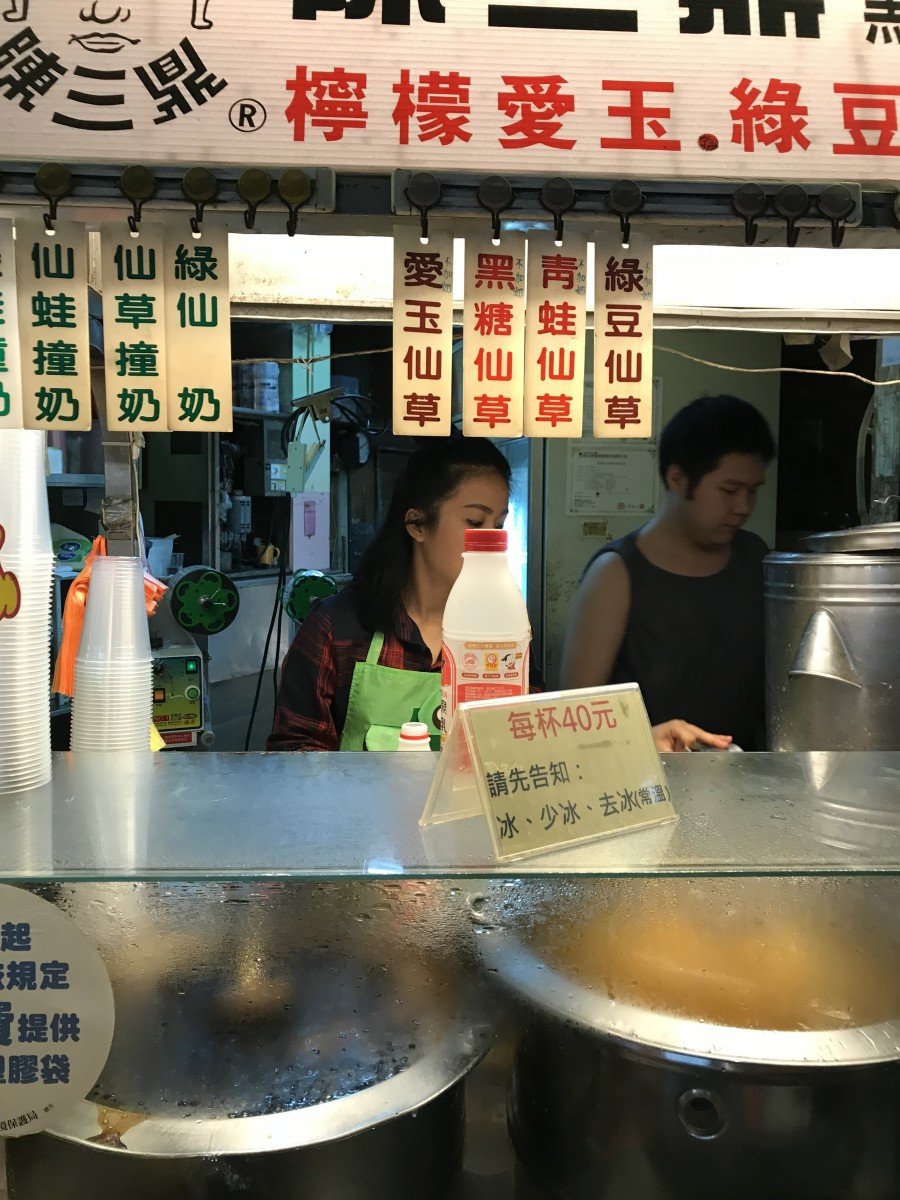 Here’s a close-up of some of the menu items. 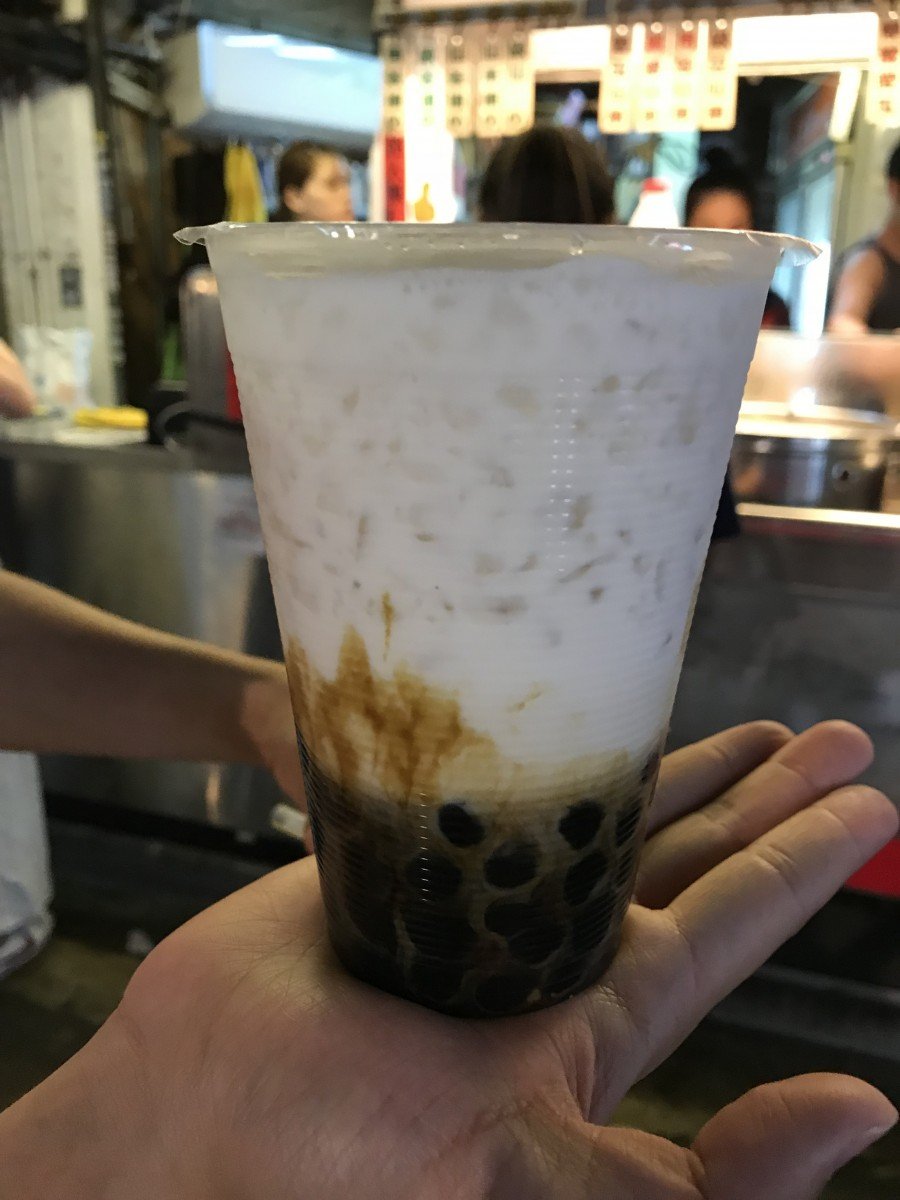 This was the drink I was after,青蛙撞奶.

Though the drink looks simple, it had a complexity that left me wanting more. The sweetness of the brown sugar blended well with the milk. The frog eggs, or tapioca, were warm and squishy. Everything that I would want in a sweeter, milk-based boba drink, I found in Chen San Ding’s frog egg drink.

Having experienced the amazingness that is Chen San Ding, when I heard that there was another contender for best brown sugar boba milk drink a short walk away from Chen San Ding. I was excited.

It is literally on the same block as Chen San Ding after a 7-Eleven. 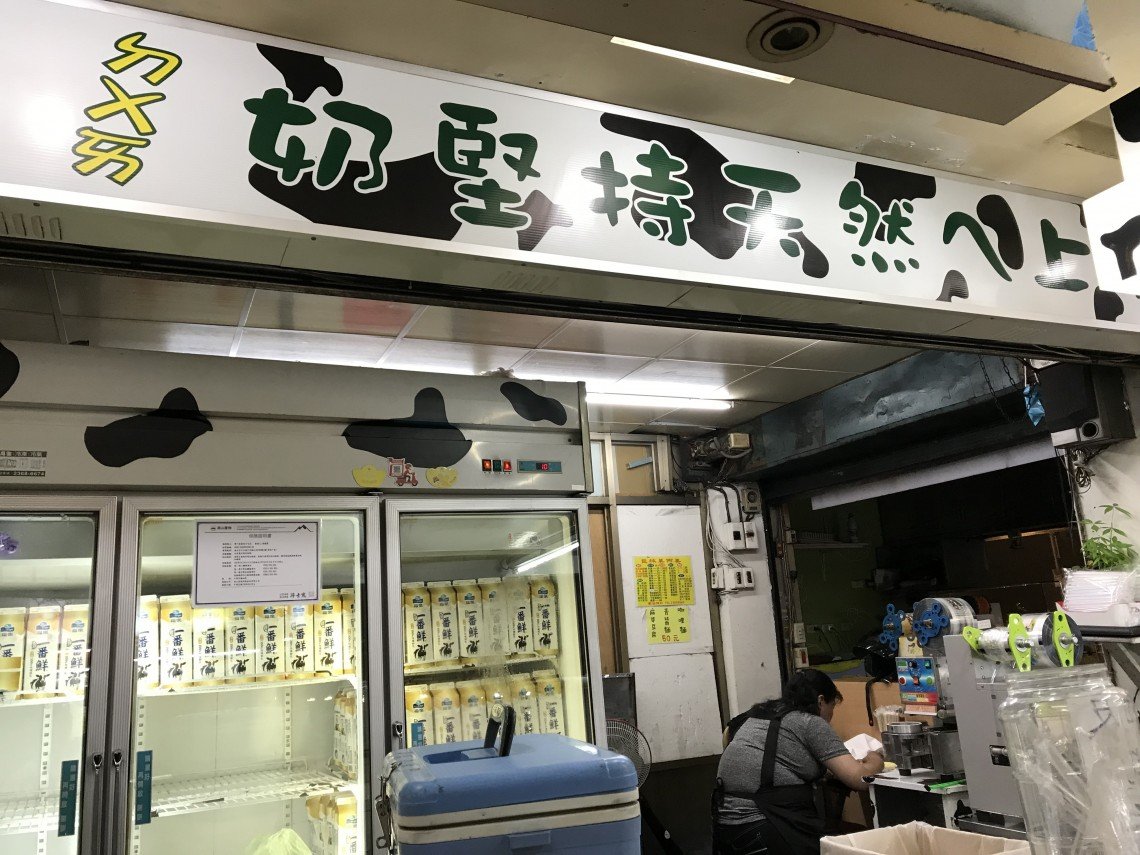 The shop looked a lot nicer with the bright white lights. At the time I went, it was raining and there was no line (though there was a line at Chen San Ding). 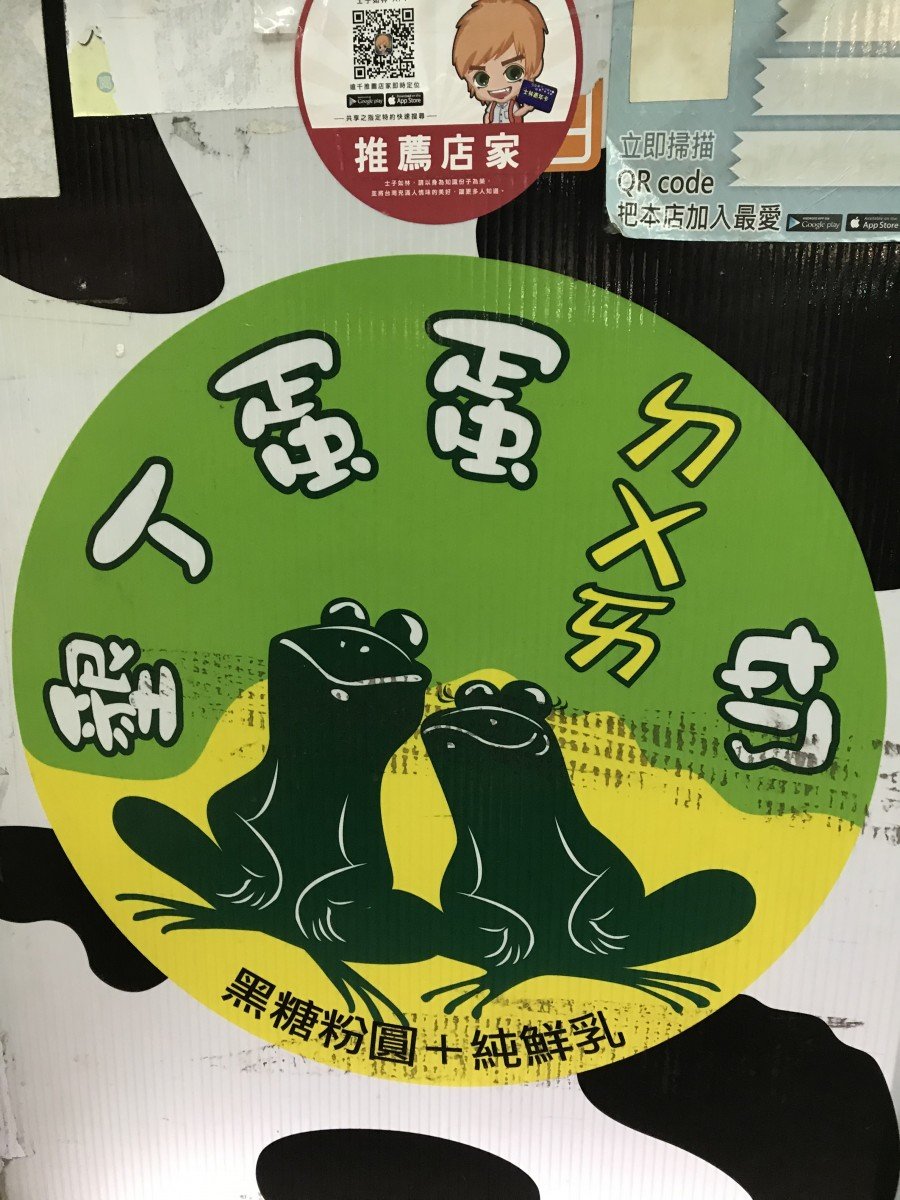 This is the shop’s logo—notice the happy mom and dad frogs. 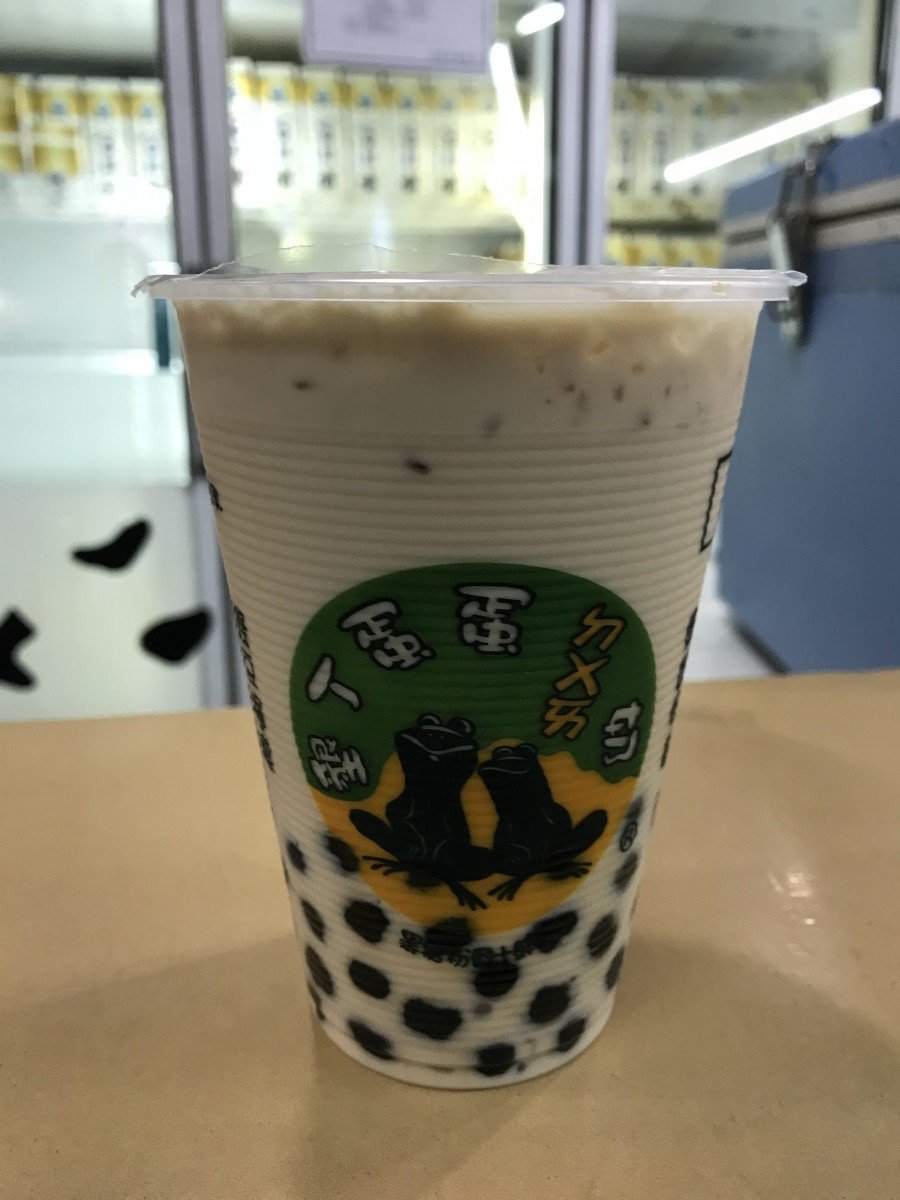 To do a fair test, I got the same corresponding drink at Kenting Egg Duai Milk as Chen San Ding. This is the drink pictured above.

Professionally, this drink looked a lot better with the logo emblazoned on the side of the cup. Beyond this, the drink fell short of the other drink.

Kenting’s frog egg drink appeared to be already mixed and although this might not be a bad thing, the flavor was not as complex. The milk flavor was a little more distinct (a plus), but the tapioca was not at squishy nor warm (a signal to me that they’re not turning constantly cooking fresh pearls). Overall, it was good but not as amazing as Chen San Ding.

To this date, I still think about Chen San Ding. Even with the many options I’ve tried in Taiwan and the United States, it remains the best brown sugar boba milk drink to date. If you’re in the area, I highly recommend you give it a try and if you’re the experimental type drop by Kenting Egg Duai Milk and see what you think.