Over the course of three days, we had seen many of the major landmarks including the Statue of Liberty, Empire State Building, Stonewall Inn, Brooklyn Bridge, and 9/11 Memorial. To finish our stay, we headed up north more to the Upper West Side. 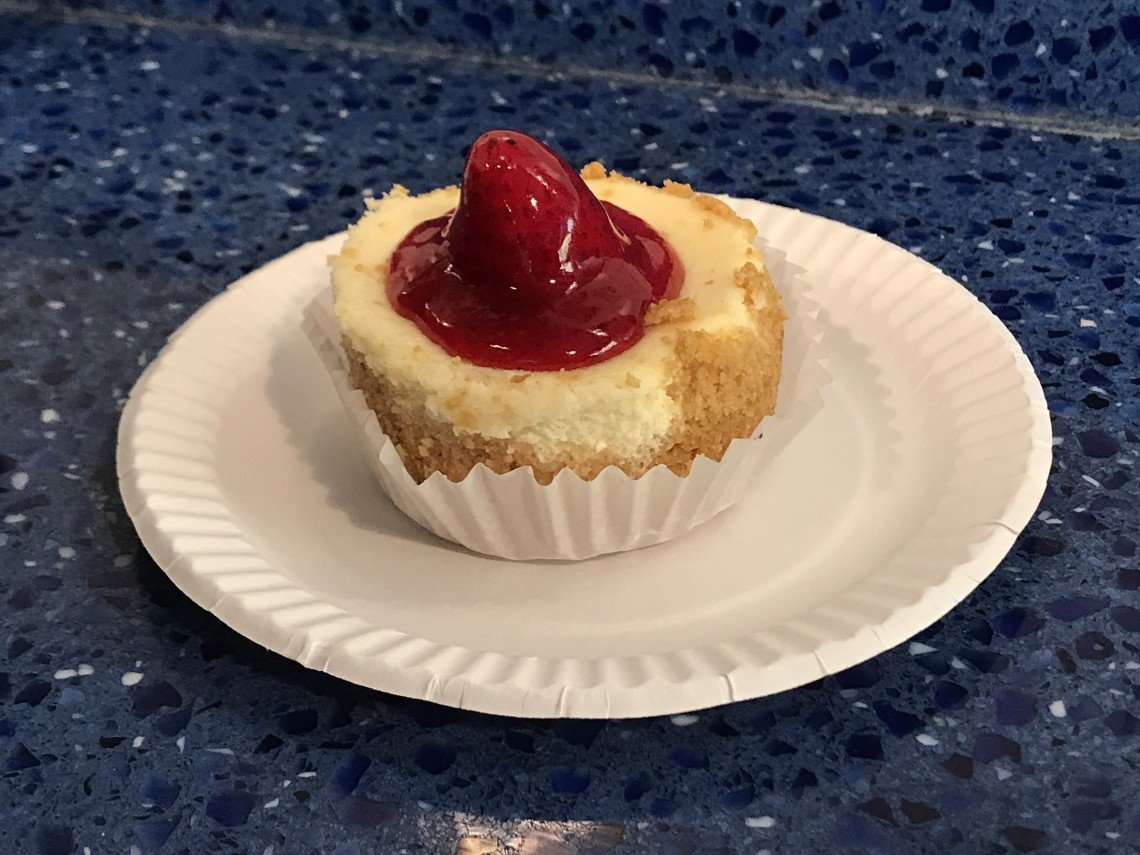 As it was mid-morning, we met up with friends to grab coffee before, unbeknownst to me, making our way to two of the top bakeries in New York City. I had previously asked one of my friends, “What’s one thing food item we should buy to bring back from New York?”

“Zabar’s or maybe Levain’s” was her response.

We headed to both of them to pick up some of the best baked goods I’ve ever had.

Zabar’s was our first destination on 80th Street and Broadway. Zabar’s is a bakery and deli known for their bagels, rugelach, and cookies.

I was here for their babka though.

The babka from Zabar’s is amazing. It’s a sweet braided bread that is soft and delicious. We got a chocolate and cinnamon babka. Both were great, though I preferred the cinnamon version more. It reminded me of a cinnamon roll with everything you would want and none of the unpleasantness (dryness, lack of cinnamon-flavor, etc.).

After enjoying babka from Zabar’s, a hole has been missing from my life. I can’t wait to go back to NYC or simply eat more babka to fill this hole.

Following Zabar’s, we headed to Levain Bakery on 74th Street and Amsterdam Avenue for some of the best cookies out there.

We got a chocolate cookie which was moist, soft but not too soft, had the right distribution of chocolate chips, was large, and just the right level of sweetness. I can see why they claim to be “New York City’s Most Famous Cookies.”

We munched on the cookie as we headed to our next destination, a short two blocks away, Central Park.

Central Park is a huge park. At 843 acres, it comprises six percent of Manhattan Island’s landmass. Though the park was planned and constructed, it has a very natural look and feel to it. Today, Central Park is one of the top tourist attractions in the world, attracting over 35 million visitors annually.

Central Park features dozens of recreational facilities, theaters, and amusement attractions including the Central Park Zoo. To this day, it is one of the most filmed locations in the world. 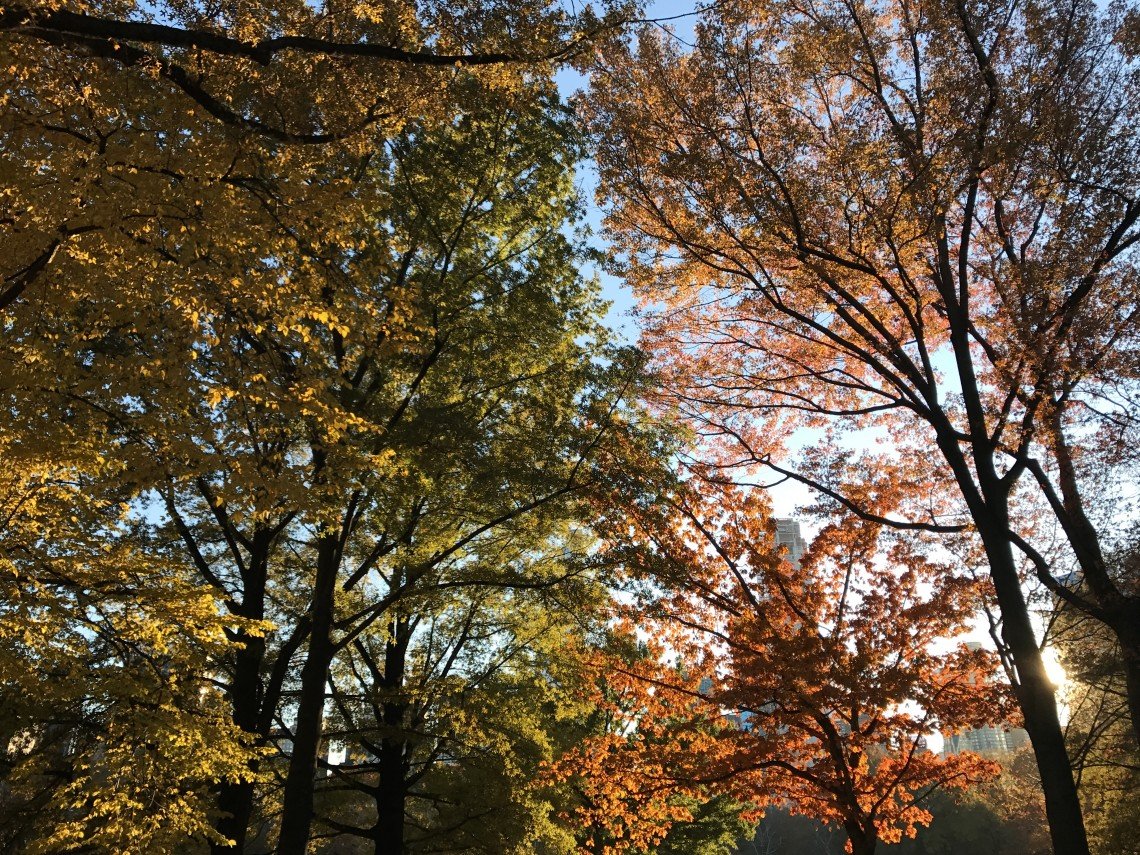 After running around The Big Apple for a few days and seeing mostly concrete, it was nice to find calm and respite amongst nature. Our journey started near Strawberry Fields (at the 72 Street Station stop) and continued across meandering paths in the southern third of the park.

The views, most everywhere, were amazing. 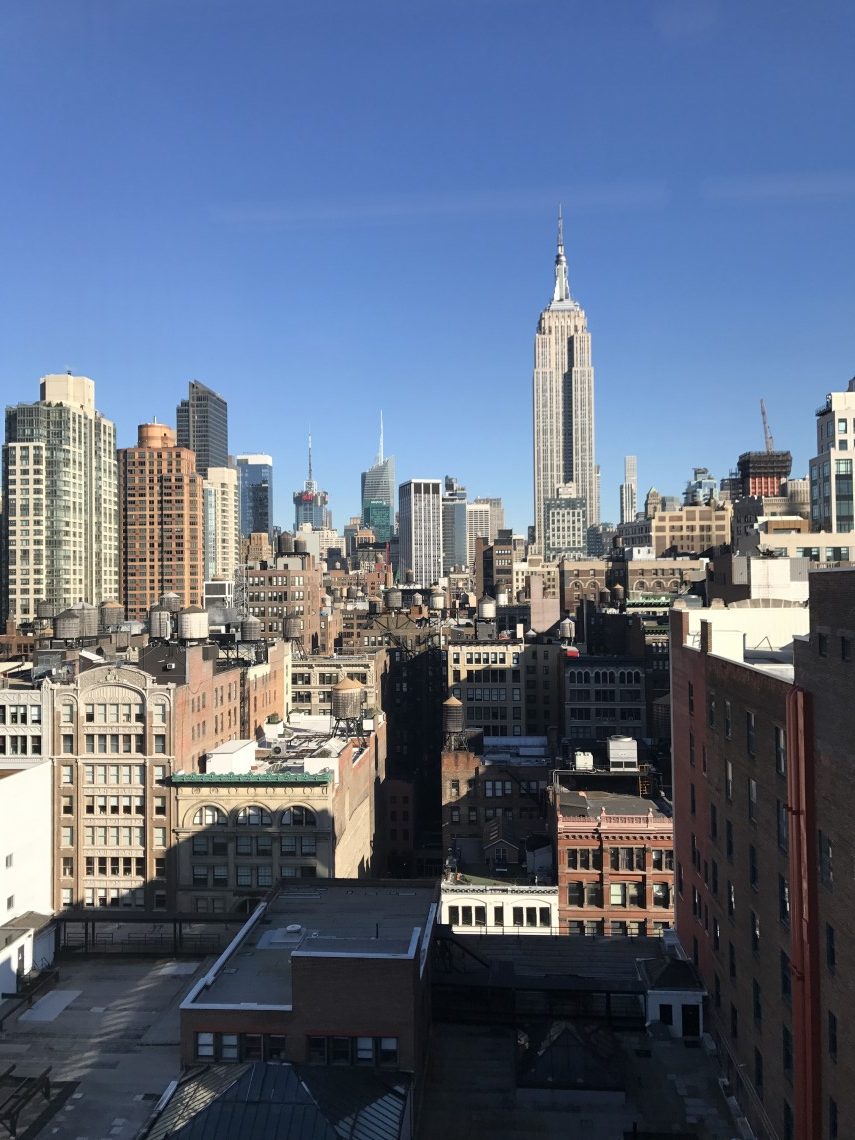 The park was alive with people—people walking, watching a performance, performing, exercising, enjoying the view via carriage, dancing, and exploring. People from all walks of life were out and about as we followed the meandering paths around large fountains, knolls, rocks, and lakes. 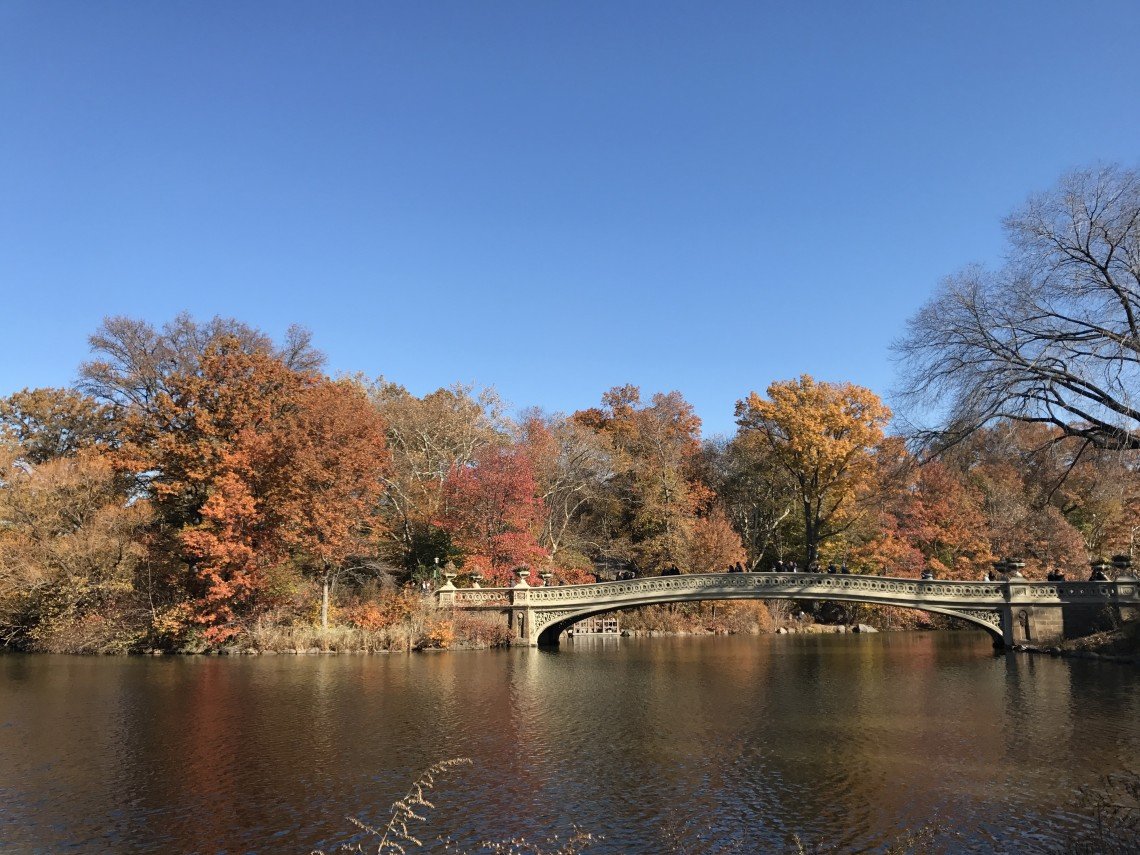 Because I remembered Enchanted taking place in New York City, and some of it being filmed in Central Park, part of my exploration of the park was guided by sightseeing stops from Enchanted.

We stopped at landmarks including Bow Bridge (above) and Bethesda Terrace where crazy routine around a fountain happened. Sadly, the fountain was not running when we went (probably due to the near freezing temperatures), but it was still fun to see the space.

This blog does a great job at showcasing different locations used for filming around New York, including those from Enchanted (if you feel so inclined to follow in their footsteps). 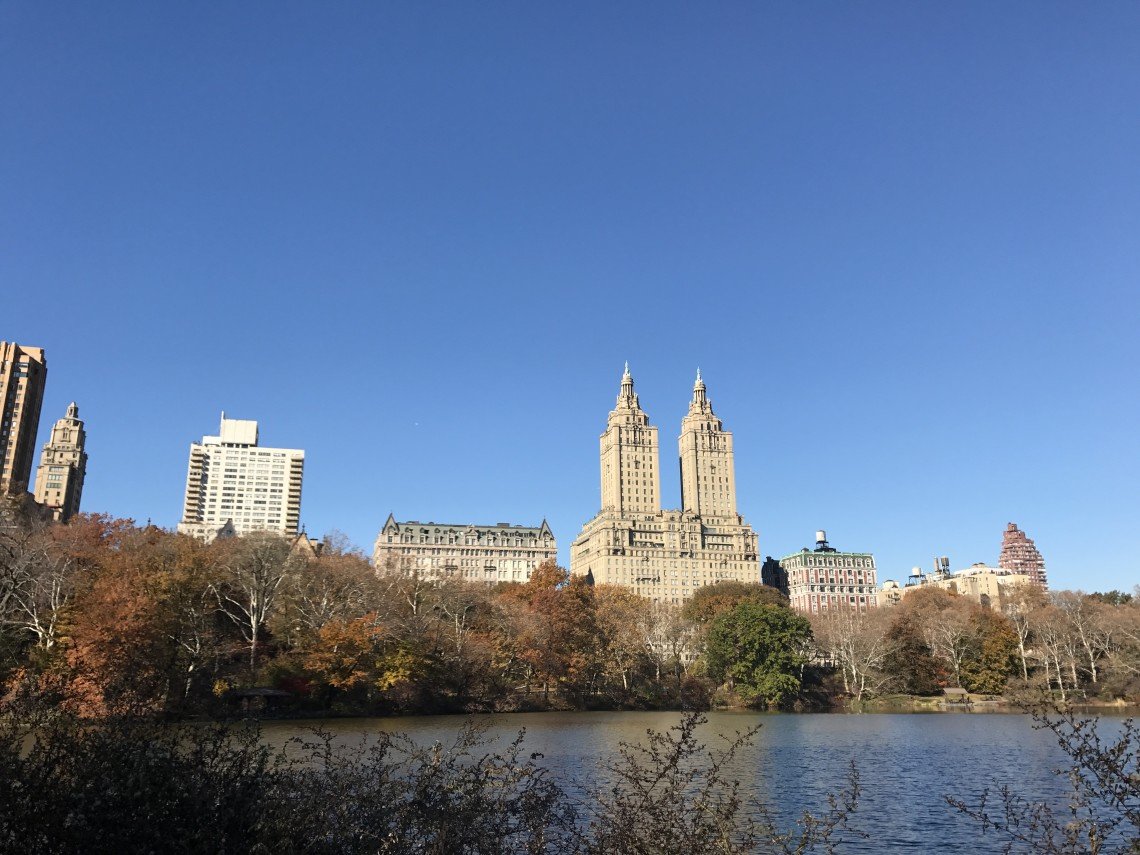 It’s possible to spend the greater part of a day exploring Central Park. Still you wouldn’t be able to see everything—it’s just that big.

After wandering around the park for over an hour, we headed to early dinner at a local Japanese restaurant called Ootoya.

Ootoya features izakaya-style dishes and is popular with people from Japan looking for something a little more home-style. 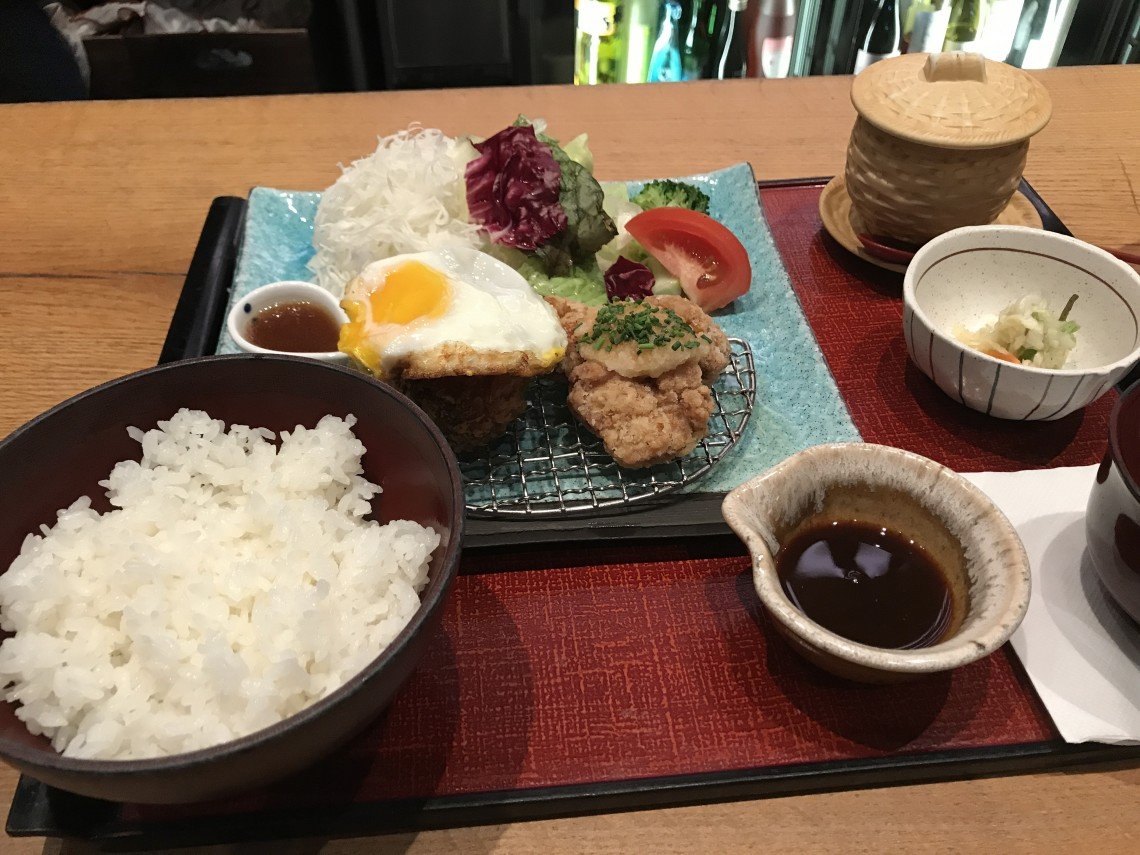 I got a chicken katsu dish that was great. From the chawan-mushi (茶碗蒸し) to egg placed gently on my katsu, I felt everything was intentionally delicious. The food reminded me a lot of my grandma’s cooking when I was growing up.

The best part about enjoying one last meal in New York City, though, was the company. My friends and I chatted until we had to leave to pick up our luggage and head out to the airport.

This day was a little shorter than the rest, but it just showed to me that sometimes all you need for a trip to be worth it is great company and great food.

Everything else just falls into place after that.